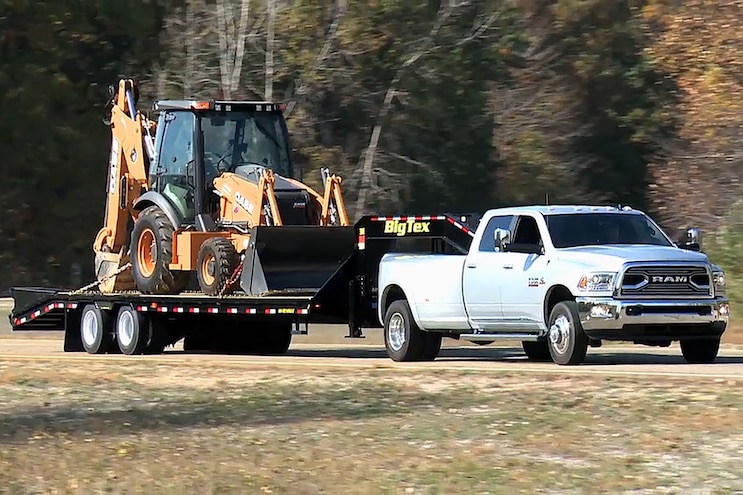 Cummins 24-Valve P-Pump Conversion
I have a ’99 Dodge Ram 3500 with a 5.9L, 24-valve engine. I’d like to convert the fuel system to a P-pump setup. I have a spare ’94 12-valve powerplant, and I’m wondering whether I can combine the 12-valve block and fuel system with the 24-valve head, and if so, which parts can interchange and which can't? Any advice is appreciated; an article about a similar conversion would probably be of great interest to many readers.
Barry Katz
via email
We asked the experts at Scheid Diesel Service Company about this swap, and here’s what they say: The big question for 24-valve owners is, “Is it a ‘53’ block?” (This number is located under the injection pump on the block.) If yes, you can swap the complete 12-valve into your ’99 using a wiring harness from a ’98 pickup and call it good.
However, if the block is not a “53,” we recommend doing the P-pump conversion. Use your 12-valve engine as a donor for the front gear housing, pump, bracketry, and linkages, and then buy Scheid’s P-pump conversion fuel lines, a cam sensor adapter for the truck’s specific model year, and a baffled oil-fill/vent (PN 2053944797).
We asked the guys at Xtreme Diesel Performance to shed some light on swapping a 24-valve head on a 12-valve short-block, as they’ve used a similar combination on the company’s ’10 monster truck. XDP says you’ll need a 24-valve camshaft, pushrods, and such, along with 24-valve center-cup pistons. You’ll also need to have your 12-valve injectors “adjusted” by a fuel shop or look into going with custom injectors, because the pressures between VP44 pumps and P-pumps are different. 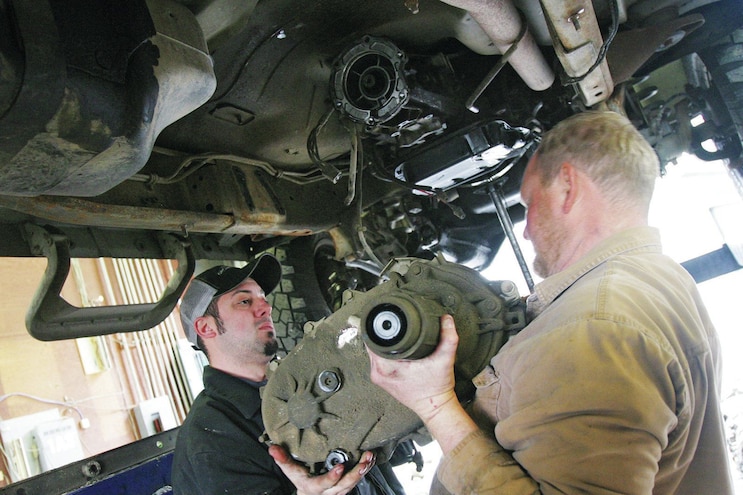 View Photo Gallery | 4 Photos
Photo 2/4   |   001 Dodge Ram Triple Threat
Ditch 47RH for 47RE?
I just acquired a ’95 Dodge Ram 2500 with a 12-valve engine and 47RH four-speed automatic transmission. The engine is good. The transmission isn’t. I also have a rebuilt ’01 47RE four-speed here in my shop. What does it take to swap the 47RE into this older truck? I want Overdrive and a lockup torque converter.
Warren Spears
via email
Replacing the 47RH with the 47RE is good choice. The 47RH was only around from 1994 to 1995 in Dodge Ram diesel pickups. The beleaguered four-speed automatic was replaced by the stouter, electronically controlled 47RE the following year.
According to our friends at ATS Diesel Performance, there are several ways to get the ’96-to-’02 47RE to work in those earlier-model Rams: 1) Swap all electronics from a donor truck into the ’95, including the ECM and PCM. 2) Convert the 47RE you have to a manual valvebody. 3) Use your 47RE with a standalone electronic valvebody, such as the ATS SelectShift Stand Alone Transmission Controller Package (PN 6019502104).
The first option requires a lot of work and patience because of all the necessary wire-tracing, modifications to incorporate the hardware, and running new harnesses. ATS Technical Director Jeffrey Wolfe recommends installing a manual valvebody or using a standalone electronic unit, based on its ease of installation and operation. While option 2 requires installing a ratchet shifter and making all gear selections manually, going with the last choice allows the transmission to function automatically. 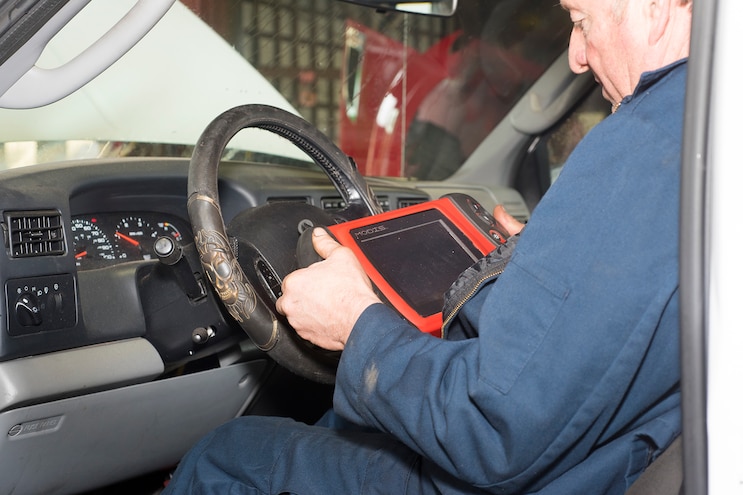 View Photo Gallery | 4 Photos
Photo 3/4   |   003 Using Scan Tool
6.7L A Non-Starter
I have a ’12 Dodge Ram with a 6.7L Cummins engine—all stock. I drove it to the store one day, but when it came time to head back it cranked but wouldn’t start. I thought it was the fuel, so I got some fresh fuel for it, and still nothing. Finally, I scanned the ODB II system and three codes came up: P2509 (ECM/PCM power input signal intermittent), P0629 (fuel pump "a" control circuit high), and P014C (O2 sensor slow response-rich to lean/bank 1 sensor 1). I checked to see if the lift pump is working,and confirmed that it is functioning properly. I'm not sure what else to check. Stumped.
Lucas
via email
Mysteries like this one are certainly enough to drive a guy crazy. There could be multiple reasons for the non-start problem. First, check the battery’s cables for good connections as well as grounds on the engine. Bad power or grounds will trip multiple codes. The next culprit could be a shorted Vistronic fan clutch that will drop the 5V reference signal voltage too low going to the ECM, causing a no-start. Mark Gotchall at Oregon Fuel Injection says this is a common problem. He recommends disconnecting the fan clutch wiring to see if the P2509 code goes away and if the engine starts. If it doesn’t, technicians at Mobile Diesel Service of Oakland, Oregon, say the codes are also indicative of a fuel-pressure-regulator problem. However, the only way to really diagnose that issue is to monitor the high-pressure side of the fuel system with a gauge, while cranking the engine (without starting it). If the fuel pressure being delivered to the CP3 is between 10 and 15 psi, that eliminates the lift pump. Scan and clear the faults, attempt to start the truck, and monitor which, if any, faults come back.

View Photo Gallery | 4 Photos
Photo 4/4   |   002 Ram 3500HD Towing
A Matter of Torque
My ’14 Ram 2500’s stock engine makes 370 hp and 800 lb-ft of torque. I just finished reading the January ’16 issue, where I saw that the factory power rating for Ford’s 6.7L Power Stroke engine is 440 hp and 880 lb-ft of torque, and GM's 6.6L Duramax LML is 397 hp and 765 lb-ft of torque. Ram's maximum stock output is 370 hp and 900 lb-ft for 2016. My question is: Why does Ram keep its horsepower number so much lower than Ford and GM? Does it have anything to do with fuel mileage? Or engine longevity?
Tom Cruikshank
via email
Cummins engines are known for delivering peak torque at a lower rpm than the competitors, which is a trait that has been passed down from the company’s big rig engines. In general, diesels spinning at lower rpm tend to last longer than those operating at higher speed. If torque and gearing is equal on two identically loaded trucks, the one with more horsepower will be able to achieve a higher speed. Remember: Horsepower=rpm x torque (lb-ft.)/5,252. Then again, the Cummins 6.7L inline-six’s higher torque at lower rpm than Ford and GM’s V-8 diesels helps Ram achieve better towing numbers during some aspects of the stringent J2807 testing. As a source at Ram engineering told us, “We apply SAE J2807 towing criteria to all three fullsize pickup segments. Higher torque and lower rpm with our 6.7L Cummins helps Ram achieve lower temperatures on thermal-related J2807 tests.” By the way, Ram’s ’16 2500 Heavy Duty has the same power numbers as a ’14 model. It’s the ’16 3500 Heavy Duty’s engine that gained 100 lb-ft of torque.