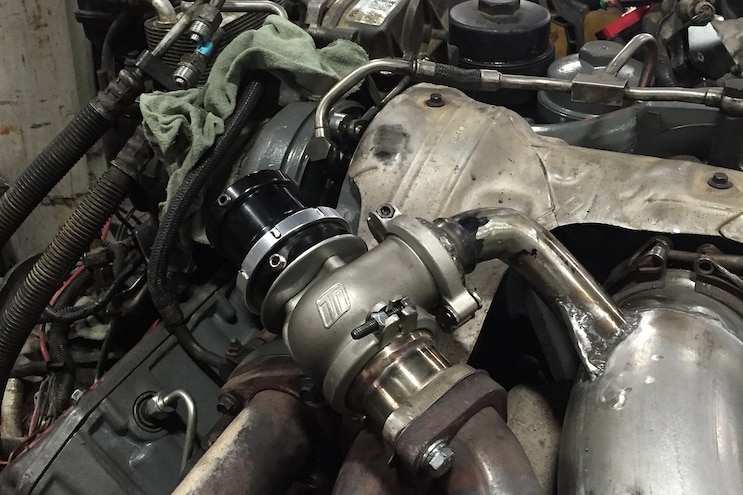 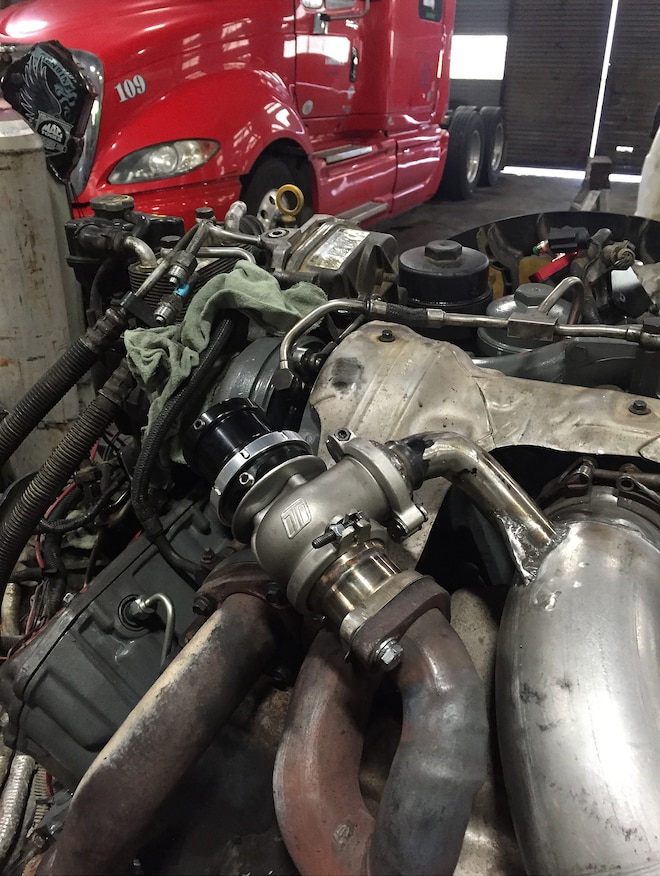 View Photo Gallery | 5 Photos
Photo 2/5   |   001 DSLP 160500 TOPT
Turbosmart’s Blow-Off Valve Controller custom-mounted on an ’09 Ford F-450 6.4L work truck at Mobile Diesel Service.
Blow-Off EGR Delete
I’m replacing the blown 6.4L engine in my ’09 Ford F-450 service truck with a Jasper remanufactured short-block. I’m going with new turbochargers and an intercooler as well. The EGR and related components will be set aside to get maximum power, but I want to protect the turbos from grenading. What do you recommend for a blow-off valve setup?
Lenny Cruckshank
via email
A great way to protect your investment is to install a separate blow-off valve to save the turbochargers when the throttle is lifted. Mobile Diesel Service in Oakland, Oregon, has done several of these custom installations on trucks like yours, using Turbosmart Blow-Off Valve Controller kits. The controller normally gets its signals from the 6.4L’s throttle-position sensor, but MDS custom-fabricates a tube and plumbs it into the boost elbow, where the truck’s actual boost can be used to control the wastegate. Placing it in this location makes it easier to install, adjust, and service if needed.
Cranky Old Allison
Several days ago, the Allison transmission in my ’01 Chevrolet Silverado 2500HD 4x4 started acting odd. When I lift off the throttle to coast around a corner or slow way down, then go to accelerate, the engine revs but doesn’t engage. I have to let off, feather the throttle until the transmission locks in, then go. If I am accelerating from a complete stop, it drives with no problems. Shifting while driving seems to be smooth with the exception of a few times when it didn't immediately engage to the higher gear. The truck has 210,000 miles on the odometer. There are no codes showing. The transmission fluid level is good, and it looks and smells clean on the stick. In reverse, while holding the brake, there’s a metallic clank sound with no distinct pattern. There’s also a vibration pulse in park or in gear at idle. What should I be checking?
via the Internet
We turned to the Allison experts at Performance Transmissions ([817] 478-0068; performancetransmissions.net) in Kennedale, Texas, to help sort out a few of many possibilities for your problem. The best advice for you to consider is to take your truck to a qualified Allison repair center so the technicians can do their in-house diagnostics with the right tools. Performance Transmissions’ Robert Simon says the Allison is a very stout unit, but it’s extremely complex and operated by its own controller, which the standard OBD scanner doesn’t see. So the transmission may have codes no one is aware of unless it’s scanned by a really good scan tool.
Another possible answer to the transmission’s shifting issue (if a deep oil pan was installed) is the internal oil filter has an unusual problem with tipping and coming partially out of the oil pump, which causes a loss of fluid pressure. There is a special tool required to access the fluid-pressure port to monitor this while driving. Or, the Allison transmission “learns” the entire time you are driving, so as clutches wear naturally you do not encounter any issues. It is possible a clutch pack has worn to the point of its inability to grab at times.
Depending on the conditions where the vehicle is used, keep in mind that salt and high temperatures can wear wiring harnesses out to the point where when someone touches or disturbs the position it has been in for a decade, water is able to penetrate and corrode the wires. With the significant amount of sensors needed to operate this transmission, all are required to function properly at all times. The sensor may be functioning, but the signal may not be making it back to the computer.
Another possibility is the early Allison transmissions have an external position sensor that is very prone to failure, but, again, without a proper scan tool, identifying the failure is next to impossible. Unfortunately, the clanking and vibration noises you asked about are not defined well enough for us to accurately diagnose. 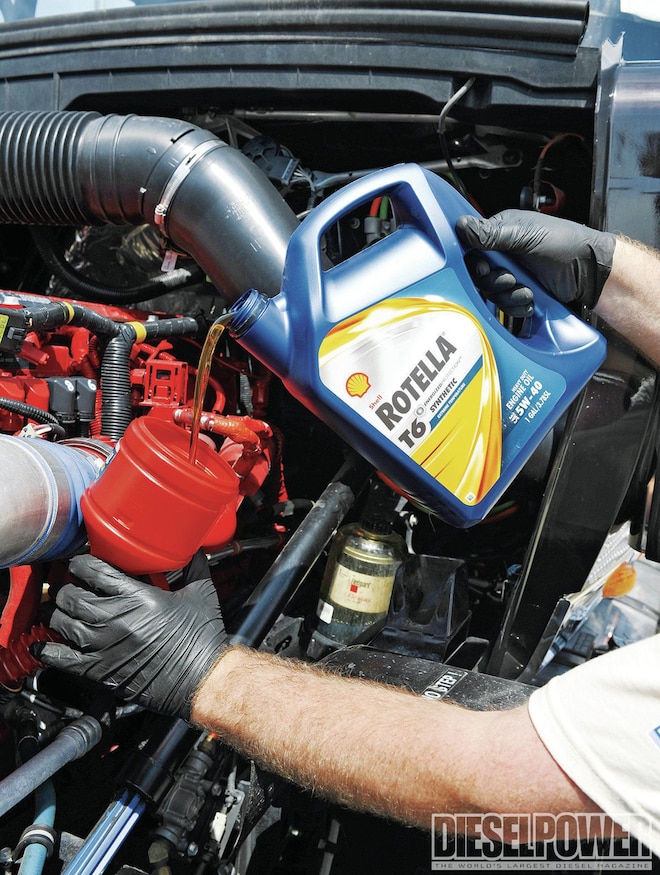 View Photo Gallery | 5 Photos
Photo 3/5   |   002 DSLP 160500 TOPT
5W-40 engine oil is a very good choice for year-round use in Ford’s 7.3L diesel.
Extra-Cool Oil
I've been running 15W-40 Rotella Triple-T oil in my ’99 Ford’s 73L engine, but I want to use something thinner for winter. I just bought 10W-30 Motorcraft, and I just wanted to make sure that's OK for my 7.3L before I put it in. Thanks.
via the internet
Stede Granger, Shell Lubricants’ OEM technical manager, checked out the specs for your 7.3L and found that SAE 10W-30 diesel engine oils are allowed for up to 40-degree ambient temperatures. In fact, SAE 10W-30 diesel engine oils are the preferred grade from -10 F to 30 F ambient temperature. The SAE 10W-30 oil should also meet API CJ-4 requirements. Stede says that from working with Navistar, he knows one of the company’s preferred viscosity grades for the 7.3L is SAE 5W-40. 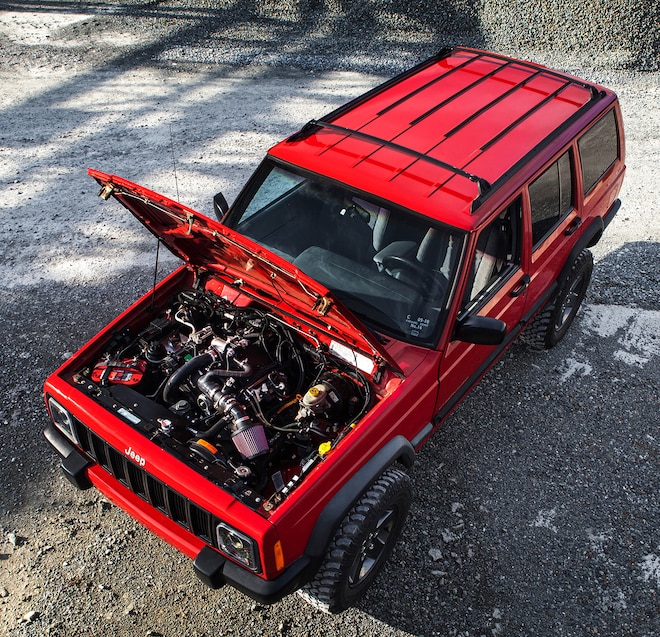 View Photo Gallery | 5 Photos
Photo 4/5   |   004 DSLP 160500 TOPT
Jeep Cherokees are becoming popular recipients of smaller diesel engines from Volkswagen and Mercedes, as well as the Cummins 4BT. Conversion kits make the job a lot easier than performing such a swap piecemeal.
Jeep VW TDI Swap
I inherited a ’96 Jeep Cherokee with a bad engine. My plan is to find an older Volkswagen 1.9L TDI diesel, rebuild it, and transplant it in the Jeep. Are there companies that offer engine swap kits like this? I don’t want this to look like a hack job.
Steven Pence
via email
You are in luck. Diesel conversion kits for Jeeps can be found for just about any combination out there, from the popular Cummins 4BT to the Volkswagen 1.9L TDI you mention. HPA Motorsports’ Coty Built ([604] 888-7274; cotybuilt.com) is the one-stop shop for your TDI conversion. You might also consider using a Mercedes OM617 or OM606 inline diesels, which are very popular conversion engines in the Pacific Northwest thanks to the kits offered by Northwest Diesel Offroad ([208] 683-0465; northwestdieseloffroad.com). Whichever route you take, 30 mpg and a ton of low-end torque will make your Cherokee a lot of fun to drive. 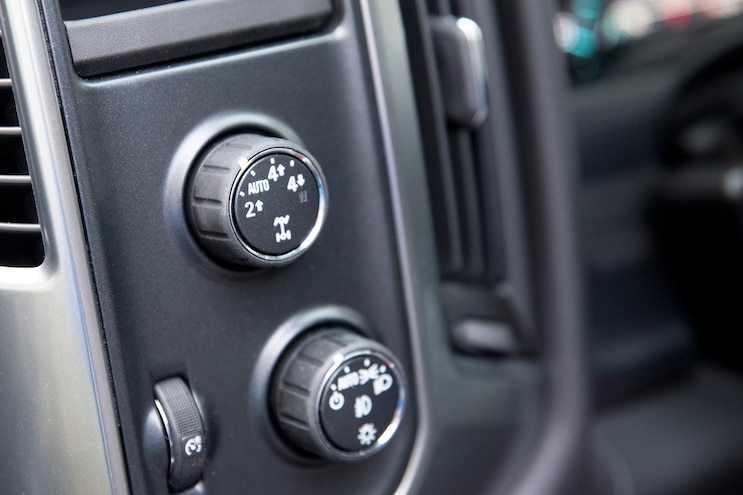 View Photo Gallery | 5 Photos
Photo 5/5   |   003 DSLP 160500 TOPT
In Chevrolet or GMC diesel pickups with Allison automatic transmissions, a transfer case–selection indicator that fails to light is indicative of a transmission solenoid or solenoid-wiring issue that will lock the drivetrain in whatever position it is in when the problem occurs.
Allison Stuck in Neutral
I drove my ’12 Chevrolet Silverado 2500HD 4x4 to town with the transfer case locked in 4H, stopped at a drive-through coffee shop, and switched to 2H as I was ready to pull out of the parking lot. When I tried to drive away, the truck acted as if the transfer case was stuck in neutral. I’ve checked fuses, connectors and wiring related to the switch, and it all looks fine. When I put the transfer case in neutral, turn the dial to 4L, and listened very closely to hear if it attempted to change position…nothing. Put the transfer case in neutral and hold the selector to the right for a while? Still nothing. The funny thing is, the lights on the selector don't even light up. I even disconnected the batteries for a few minutes to see if something would reset. Nada.
via the internet
When a Chevrolet/GMC push-button four-wheel-drive system fails for any reason, it shuts down in whatever position it is in at the time of the failure. This condition is confirmed by the light not illuminating on the dashboard. Without a qualified scan tool, it’s impossible to identify what codes are set, according to Robert Simon, a tech at Performance Transmissions ([817] 478-0068; performancetransmissions.net) in Kennedale, Texas. Robert says there’s a way to command a “relearn” without a scan tool, but unless the vehicle actually requires it, this can cause damage and make things worse.
The most likely culprit is the NP 263XHD transfer case. Robert says the shift fork wears out, resulting in the partial engagement when in two-wheel drive or four-wheel drive. This does not have a noise associated with it. It’s a weak spot in that transfer case, and because Duramax engines deliver so much torque, this partial engagement results in the components stripping out. Once they’re damaged, it can seem as though the transfer case is in neutral. There is an upgraded shift fork available to help prevent this, but over time the problem still occurs.