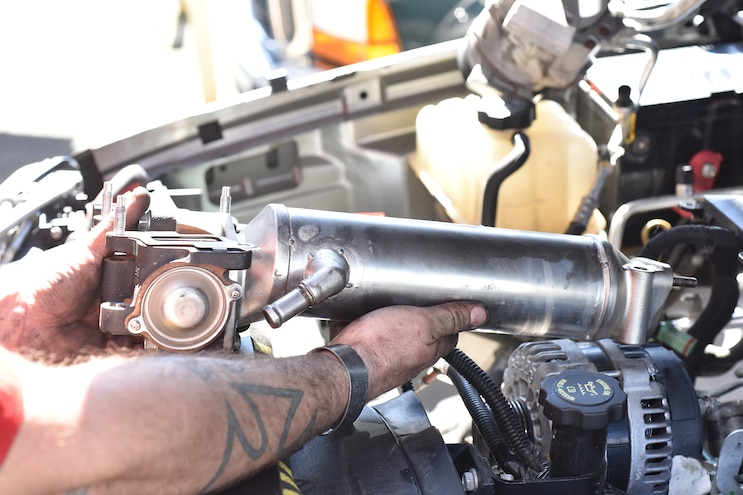 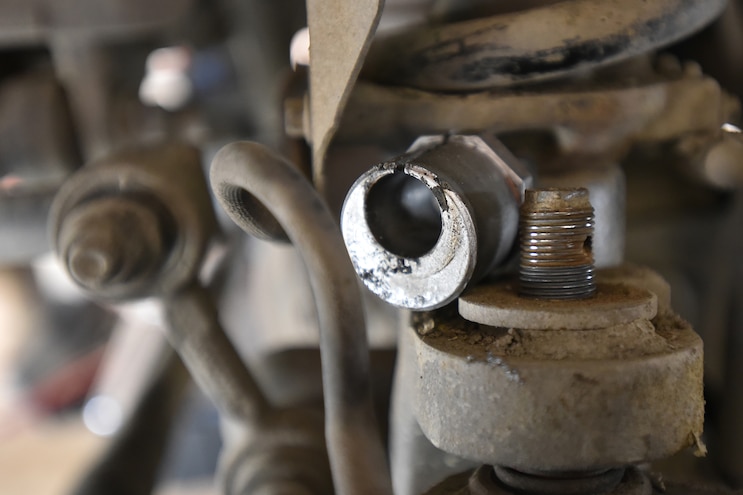 View Photo Gallery | 4 Photos
Photo 2/4   |   001 Ford Wander
Lifted or leveled Ford Super Duties benefit from having steering caster set so there’s 1 degree of separation between driver and passenger sides, with the highest number on the latter. A good caster target number is 4.5 degrees for the driver side and 5.5 degrees for the passenger side.
One Degree of Wander
After putting a 2½-inch leveling kit on my ’09 Ford F-350 Super Duty, the truck has a slight pull to the right and wanders a bit going down the road. I had the front end aligned, and the technician adjusted the caster to 3 degrees, which he said is at the upper end of the factory specifications (.8 to 3.4 degrees). It still seems a bit off. Is there anything else that can be adjusted to stop the wander?
Ron Apling
via email
Steering geometry, toe-in, and caster change when the suspension is raised/lowered. Caster plays the key role in steering. Lifting the front suspension reduces the amount of caster, which causes your truck to pull or wander. Dialing in the correct amount of positive caster on lifted 4x4s so they track straight is sometimes a challenge for the typical alignment shop following the factory specifications.
Richard McFarland, the alignment technician at Dunks Performance, says his trick for stopping the wander on Ford 4x4s like yours is twofold: First, he installs BD Diesel Performance’s adjustable caster/camber kit (PN 1032100) on the radius control arms, which he says brings in about 3.5 degrees of positive caster on Super Dutys.
After that, he pulls out the stock upper-ball-joint-adjustment bushings, replacing them with whatever shims bring caster to 4.5 degrees on the driver side and 5.5 degrees on the passenger side. “We’ve found over the years of aligning lifted Fords that fine-tuning caster like this to get 1 degree of separation between the driver and passenger side caster numbers makes all the difference in how they track after being leveled or lifted,” Richard says. “When they leave here, they handle better than they ever did from the factory.”

View Photo Gallery | 4 Photos
Photo 3/4   |   002 EGR Cooler
EGR coolers eventually plug up and need to be cleaned or replaced. Cleaning isn’t easy, and replacing them is costly. If you choose cleaning, make sure it’s done thoroughly.
Clean, Replace, or Delete
I have an ’07 Chevrolet Silverado 2500HD that has a 135,000-mile 6.6L Duramax LBZ engine in it. In my quest to add a little more power, I’m stepping up to a Garrett PowerMax Stage 1 turbocharger. I know I’ll have to remove a lot of parts to get the turbo swapped out. My question is, while everything is being pulled off, should I buy a new EGR cooler and EGR valve or take the time to clean the stock ones along with cleaning the intake manifold? If cleaning is OK, what is the best cleaner? Unfortunately, they do smog inspections where I live, so I don’t have the luxury of just deleting/bypassing the EGR system.
Caleb R
via the Internet
When it comes to EGR coolers, you’re lucky your truck has a Duramax and not a Cummins or Ford Power Stroke engine, as Duramax EGR coolers are less expensive to replace than the other two. Most of the shops we talk to about this topic favor replacement instead of cleaning, because the labor cost for thoroughly cleaning an EGR cooler is about the same as just putting in a new unit. Sinister Diesel, Bostech Fuel Injectors, and Bulletproof Diesel each provide good replacement choices.
You can usually clean the EGR valve of carbon and soot, saving several hundred dollars in the process. Just make sure not to get cleaning solvents/fluids on any electrical components if they are present. The intake can be cleaned as well.
Cleaning is an option on the EGR cooler, but not one we’d recommend because it’s difficult for the DIYer to get it thoroughly clean, and any residual chunks of carbon can break off, potentially creating other issues.
If you want to try cleaning the EGR cooler, we recommend first checking with your local radiator shop to see if they can service it using an ultrasonic cleaner. Otherwise, don a pair of rubber gloves and fill the cooler with a strong degreaser such as Simple Green or Krud Kutter, leaving it to soak overnight. Flush with clean, warm water and keep repeating the process until the water coming out of the cooler runs clear.
During the second cleaning, it may be helpful to half-fill and shake the cooler vigorously to help dislodge the crud. Even after all that work, nothing guarantees the cooler is really clean. And, if it’s not, it’ll quickly clog up again. 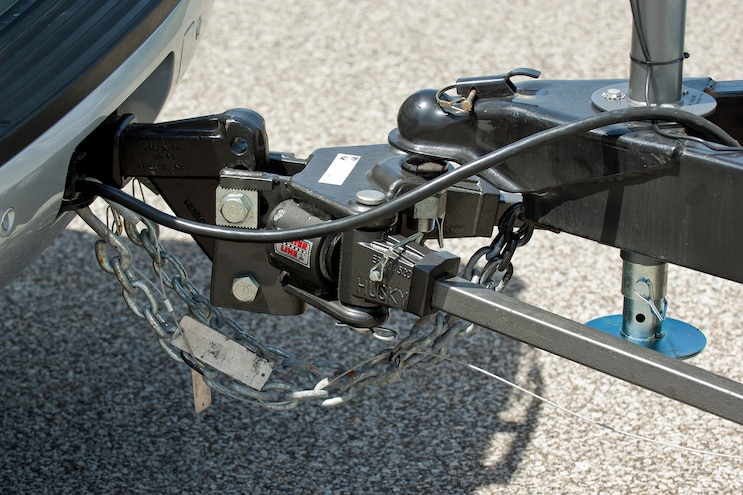 View Photo Gallery | 4 Photos
Photo 4/4   |   003 Level Tow
While airbags can help level the tail of a pickup towing a trailer with too much tongue weight, using a weight-distributing hitch brings a lot more safety and benefits.
A Level Tow
- I occasionally tow a Jeep TJ and a Polaris side-by-side on a tandem-axle behind a ’14 Ram 1500 EcoDiesel. The truck always sits tail-low with the toys in tow, and I want to level it for better steering. Right now, I have the hitch shank reversed so the ball sits above the bumper. Will a Class V hitch and airbags help?
Mark Denman
via the Internet
That’s a nice selection of toys. We’re envious! No, a stouter hitch will not change the truck’s nose-high, tail-low attitude, nor does it change towing capacity. Yes, air-helper springs do a great job leveling heavily loaded pickups. However, airbag springs aren’t the proper solution. What you are encountering is the effect of too much tongue weight, which is the weight of the trailer pressing down on the hitch ball.
Although you don’t give specifics, based on your description, it’s a good bet the weight of the loaded trailer is approaching 7,000 pounds, which is near the maximum towing capacity of your truck. The Ram 1500 has a hitch “weight-carrying” limit of 5,000 pounds and 500 pounds tongue weight (TW). The TW on your truck is probably close to 700 pounds (or more) with the load mentioned, depending on how you have the vehicles positioned on the trailer in relation to its axles.
Ideally, using a weight-distributing hitch is the best solution. Ram Trucks actually requires using the device on its ½-ton pickups when towing trailered loads weighing more than 5,000 pounds. A properly set up weight-distributing hitch will significantly improve your 1500’s overall handling, keep it sitting on an even keel, and be in complete compliance with Ram Trucks towing recommendations.