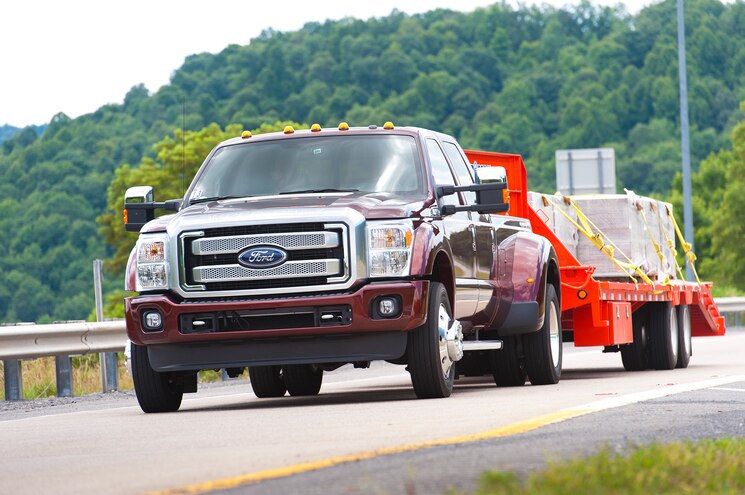 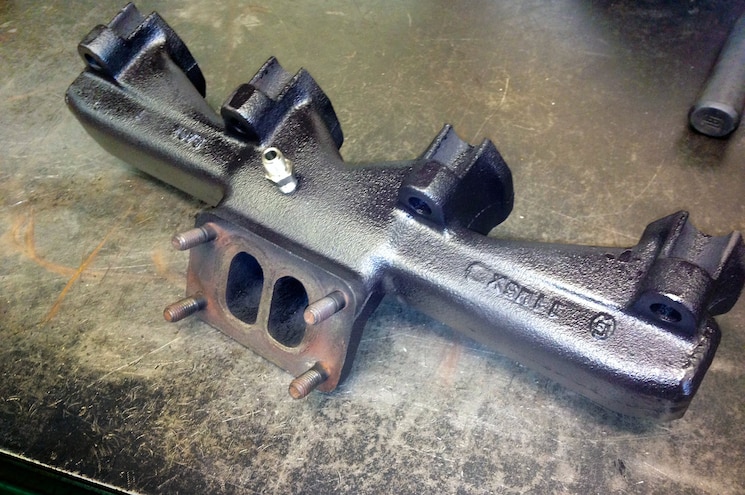 View Photo Gallery | 5 Photos
Photo 2/5   |   Slicing off and capping the outside ports of a junkyard 5.9L Cummins 6BT exhaust manifold is an economical way to make a center-outlet 4BT manifold. This mod places the turbocharger farther away from the firewall, for vehicles that have engine-bay constraints.
Cheap Manifold Mod
I was having a closer look at a 3.9L Cummins 4BTAA engine that I plan on putting in my ’92 Ford Bronco and noticed the turbocharger sits at the rear of the exhaust manifold with the gases exiting to the rear. I want to mount the engine as far back as I can and leave enough space so I don’t have to mess with the stock air conditioning. Is there another 4BT exhaust manifold that places the turbo farther forward or a different manifold I can use to relocate the turbo?
Mike Wilson
via the Internet
The rear “low-mount” turbo location is a common problem for some of the 4BT swaps where space in the engine bay is at a premium. An inexpensive and easy way to get the clearance you are looking for is to find a used 6BT manifold and modify it. John Barricklow, the owner of JB Custom Fabrication in Salem, Oregon, has built several 4BT-powered Broncos and says “You can cut and cap off the flanges for #1 and #6 cylinders on a junkyard 6BT manifold, making it a center-outlet 4BT manifold. It bolts right up and allows you to position the turbo higher and away from the firewall.” One nice aspect about the Cummins manifold is that it’s made from quality low-carbon steel, which makes it easy to MIG weld. John recommends pre-heating the areas being capped off with a torch before welding. If you want something more custom, ZZ Custom Fabrication’s owner, Greg Young, says his company carries all the flanges and parts to fabricate your own setup, or they can build a manifold for you. (Steed Speed is in the process of completely redesigning its 4BT exhaust manifold and hopes to have units available in 2017.) There are also a number of stock 4BT manifolds of different configurations on eBay and other Internet sales sites that may provide other workable alternatives. 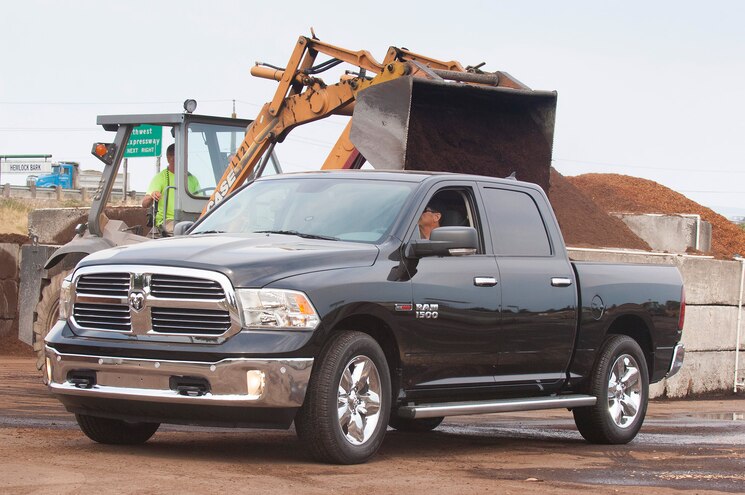 View Photo Gallery | 5 Photos
Photo 3/5   |   Newer diesel-powered vehicles are prone to experiencing frequent diesel particulate filter (DPF) regenerations (to burn out soot buildup in the diesel particulate filter). Owners of pickups driven around town or that idle a lot will see more regens than those primarily driven on the highway.
EcoDiesel Regen Frustrations
I have a ’14 Ram 1500 EcoDiesel with about 12,000 miles on it. I drive it to work across town (about four miles each away) and drive it on the highway several times a month with a camper loaded in the bed. The engine goes into regen mode for almost every tank of fuel. Every time the message says to regen, I have to take the truck down the highway for 30 miles so it doesn't go into limp mode. I really like the 3.0L EcoDiesel engine, but I’m getting very frustrated with having to regen with every tank. I already had to take it to the dealership once, and technicians say everything is normal. Is it?
Lenny Speilman
-via the internet
The ’13-and-newer 3.0L EcoDiesel engines use both “passive” and “active” regen modes to clean the diesel particulate filter (DPF). What you are experiencing is the “active” mode. Passive means the EGT is high enough under the conditions to clean the DPF without needing additional fuel during the exhaust stroke. (Think self-cleaning oven.) The engine is doing this quite often during normal driving, and you’ll see a message on the Electronic Vehicle Information Center that says: “Exhaust System— Regeneration in Process Exhaust Filter XX% Full.”
During active regen (when you receive the message telling you to “safely drive at highway speeds to remedy”), the engine control module is stepping up the burn-off procedure and requires driving the truck (at 50 to 55 mph for up to 35 minutes) until the regen is finished. Shutting down the engine before the active regen completes will require the process to be done all over again with the next start up.
The ECM triggers an active regeneration when it receives a signal from the exhaust sensor that indicates backpressure has reached a certain threshold and/or driving style/conditions match factory-set ECM parameters that will command regen. Here’s what Ram engineers tell us:
“We actually use both approaches to trigger a DPF regeneration. If PM (particulate matter) make is slow and steady, then we use time-based strategy. If PM accumulates more rapidly due to duty cycle or type of operation (think highway vs. driving in stop-and-go traffic where you have a lot of throttle excursions), then regeneration is triggered based on pressure drop across the DPF. This is determined using a differential pressure or delta-P sensor that is connected to both the inlet and outlets of the DPF. The delta-P sensor provides an electrical signal to the engine control module, allowing it to determine when regeneration is required. “Ideally, DPF regeneration is transparent to driver and requires no ‘intervention’ on his or her part. However, if the DPF does not get hot enough for a long enough period of time to initiate or complete the regeneration process, then a warning message may be displayed that directs the driver to operate vehicle on the highway.”
Either way, a more aggressive burn-off of soot in the DPF during an active regen is done by cutting off diesel exhaust fluid (DEF) injection and adding more fuel into the engine during the exhaust stroke. These steps greatly increase EGT and the heat inside the DPF compared to a passive regen.
The DPF’s clogging percentage isn’t an actual physical representation of how much soot is in the filter. It’s like the engine oil life indicator, which details how close the engine is to reaching a harmful performance threshold in the exhaust system based on: 1) exhaust backpressure, and 2) factory ECM calibrations.
In all actuality, if the DPF is 85 percent full of soot, there will probably be so much backpressure that the engine won’t run. 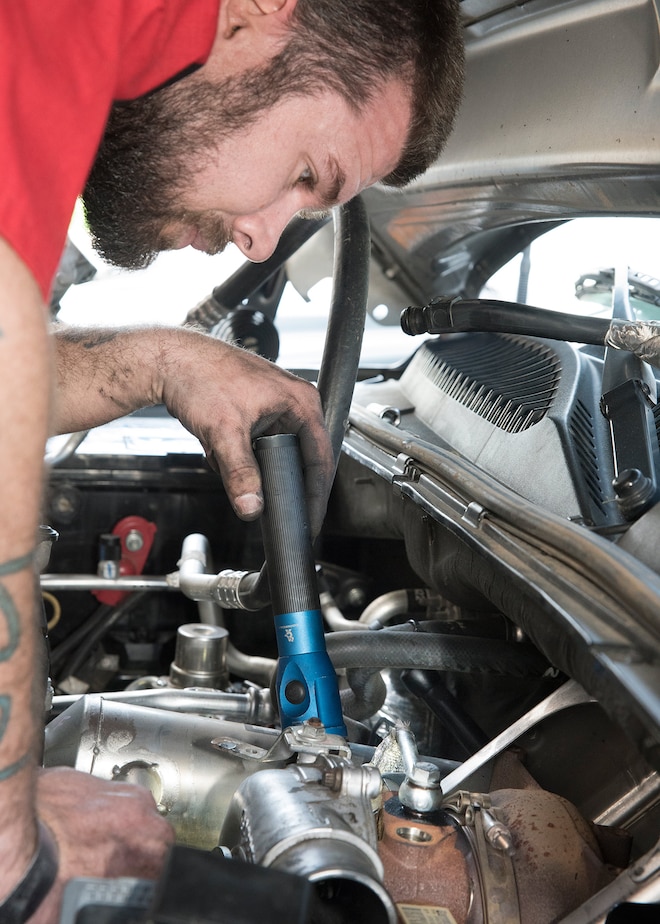 View Photo Gallery | 5 Photos
Photo 4/5   |   Boost-related problems after a turbocharger swap are not uncommon, and they’re caused by leaks in the exhaust system. A close inspection of up-pipes, boots, and intercooler tubes usually reveals the culprit.
Slow Boosting
I had a mechanic do some last-minute work to replace the high-pressure oil pump of my ’04 Ford Super Duty’s 6.0L engine just before I moved to another state. I hit the road the morning after the work was done. Highway boost during the road trip stayed around 4 psi, and I noticed the turbocharger slowly builds boost to about 8 psi, then it comes on strong. If I back off the throttle for an instant, it loses all boost. Any idea what could be going on? The truck is stock with 154,000 miles on it.
Corey Smith
via the Internet
This behavior is typical of an exhaust leak somewhere. Something may have been misaligned or not tightened to specification during reassembly. Check everything in the exhaust system that feeds the turbo. Pay special attention to the turbo and intercooler boots and pipes, manifolds, and up-pipes. The latter are prone to leaking, as they are hard to access with the cab on. The slightest exhaust leak in any of those areas will affect boost in the manner you describe.

View Photo Gallery | 5 Photos
Photo 5/5   |   Ford TSB 16-0041 is said to fix an issue experienced by some ’15-to-’16 6.7L engines that shudder and lose power during DPF regenerations. The warrantied repair requires replacing the exhaust valves in the driver-side cylinder head.
Jackhammer Regens
I put on about 1,200 highway miles a week towing box and flat trailers with my ’15 Ford F-250. At around 35,000 miles, the 6.7L engine started shuddering, pinging, and losing power during DPF regenerations. I went right to the dealer and was told this is a warrantied emissions issue that requires pulling the cylinder head on the driver side and rebuilding it with new exhaust valves. Less than a month after I got the truck back, the problem resurfaced and the dealer rebuilt the same head again. That repair lasted just shy of 70,000 miles. Now the truck is back for its third round of warranty repair. I love Big Blue, but this is really testing my patience. Has Ford found a sure-fire fix for this?
Larry Crutchfield
-via the Internet
Apparently, Ford has found a fix for what’s being called the “jackhammer regen” and loss of power on some ’15-to-’16 Super Duty pickups with 6.7L engines. According to TSB 16-0041, issued March 7, 2016, the first step is the dealership reprogramming the powertrain control module (PCM) of the affected truck with integrated diagnostic system (IDS) release 99.03 or higher.
In some instances, the TSB also authorizes 16 hours of shop time to remove the driver-side cylinder head to replace the exhaust valves and seals, along with a number of other parts required when doing the repair. The work is covered under the Provisions of New Vehicle Limited Warranty Coverage and Emissions Warranty Coverage. We’ve reached out to Ford engineers to find out what was specifically causing this problem during regen and have yet to get a reply.