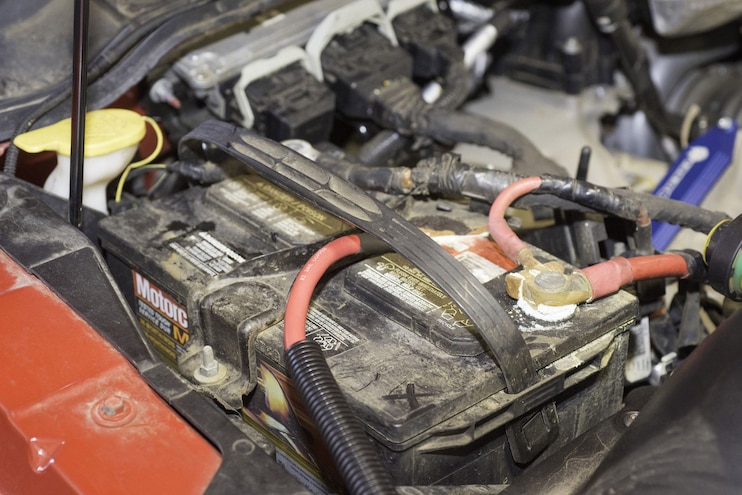 It happens every day to drivers everywhere. Hop in your ride, turn the key (or push the button), and you’re going nowhere fast.
The two basic lack-of-fire categories are a no-crank condition or one in which the engine cranks but won’t start. No crank means the starter motor is not turning the engine to kick off the combustion process. Crank but no start refers to the starting system working fine, but the engine rotates without ignition.

All kinds of issues can instigate the more common no-crank situation. 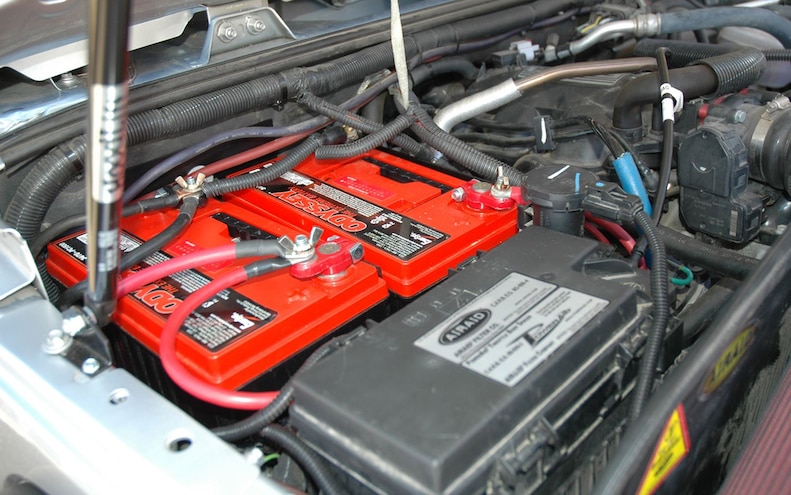 View Photo Gallery | 9 Photos
Photo 2/9   |   Shop Class No Start Battery
The Battery
A plain old bad battery is often the problem. A slow crank, no crank with instrument panel indicators flickering, or stone-dead electrics are typical symptoms. All are signs of insufficient amperage (current flow) from the battery to power the starter.
There are several different battery-capacity ratings used, but cold cranking amps (CCA) is the one you should focus on. CCA is defined as how many amps a 12-volt battery can produce at 0 degrees Fahrenheit for 30 seconds with voltage not dropping below 7.2. Rating cold is important because batteries work better in warmer temperatures. So a failing battery may not show symptoms until a cold winter morning. CCA is also often used to evaluate battery testing equipment.
How many CCA do you need? The bigger the better; every vehicle has a minimum-capacity battery specification to efficiently power all of its electric components. If yours is rated at 500 CCA, replace with a battery at or above that mark. 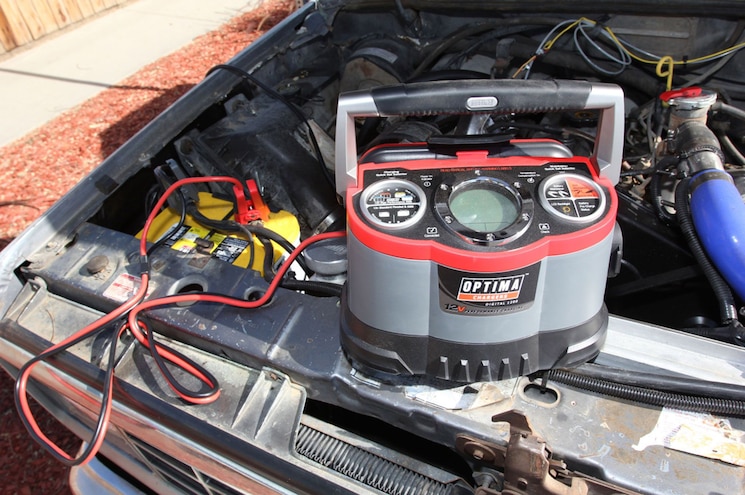 View Photo Gallery | 9 Photos
Photo 3/9   |   Shop Class No Start Battery Charge
Dead (Good) Battery?
A dead (insufficiently charged) battery is not necessarily bad. Diagnosis begins with charging and testing the battery itself. But what if it tests good? There are a few cases where a bad battery passes the test, but more often than not there’s an underlying cause.
We know a battery cannot keep dishing out amps without getting something in return. That’s where the alternator comes into play. With the engine running, there will be about 14 volts coming from the alternator, and the amount of amperage flow is dictated by alternator capacity, engine speed, and electrical load on the charging system. With the alternator working correctly, all components are happily powered up and the battery will have a good charge after shutdown for the next start-up.
But when an alternator fails, the necessary amperage flow no longer exists to power everything. So the vehicle is running off the battery, and voltage steadily drops from the needed 12 volts. Lights dim, electronic components go crazy, hopefully a charging system warning indicator gives you a heads up, and eventually voltage is not enough to run the engine’s fuel and ignition systems. The engine shuts down, and you pull off the road. 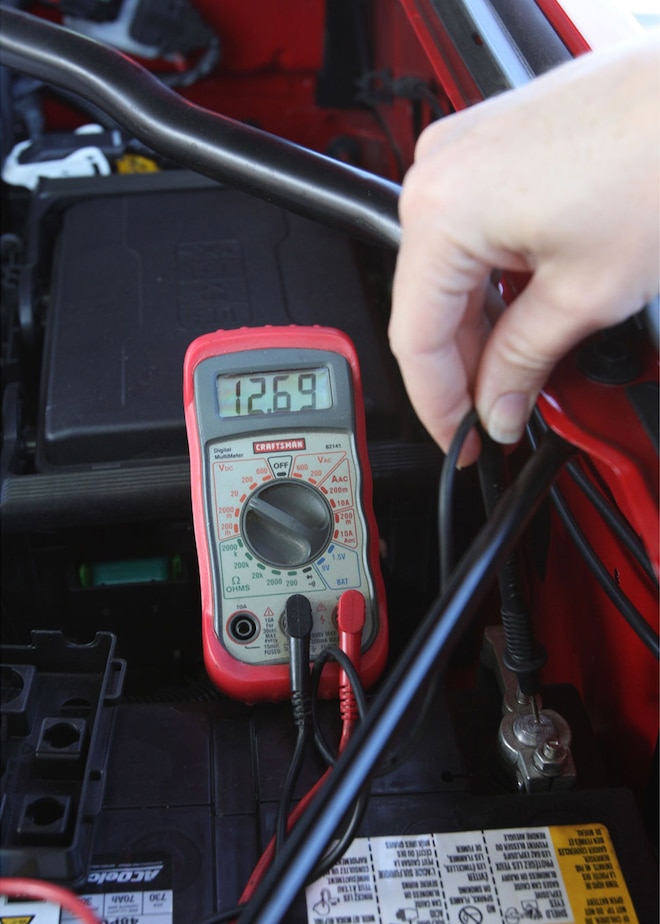 View Photo Gallery | 9 Photos
Photo 4/9   |   Shop Class No Start Battery Check
At that point, there’s not enough juice left in the battery for the starter to crank over the engine. But you typically had plenty of warning.
Anyone who drives a hybrid or EV may wonder why there’s no beltdriven alternator under the hood, even though the vehicle still uses a 12-volt battery to power lights, audio, and almost everything else. The answer is what’s called a DC/DC converter. Many EVs use a lithium-ion battery rated up to near 400 volts, which would fry your radio. The DC/DC unit converts that mega-voltage down to a 14-volt range and varies amperage flow as needed. This powers all the vehicle’s components and maintains a charge on the 12-volt battery—just like an alternator.
Good battery, alternator doing its job, but a dead battery and no crank when it’s time to get to work in the morning: This situation is often caused by what we call excessive parasitic draw.
When you switch off the ignition, lock the doors, and go to bed at night, electrical components continue using a small amount of amperage from your battery (parasitic draw). Stuff like clock and radio preset memory uses some, but there are a number of electronic control units that go into a “sleep mode.” A good example is a security-system control unit. It requires a small amount of electricity to keep one eye open while sleeping. So it’s semi-awake to sound the alarm when an intruder opens a door without using a key or remote.
A common number is a maximum parasitic draw of 50 milliamps, but even with the growing number of ECUs used in late models, technology is keeping parasitic draw well below that.
Let’s say an ECU fails and doesn’t go to sleep or an input (switch, sensor, and so on) to the ECU is keeping it awake when it shouldn’t. That ECU stays in full-power mode, as with the ignition on, draws too much amperage, and drains the battery overnight—just like leaving your lights on.
Bad Connection
Right up there with the frequency of bad batteries, poor connections also produce a no-crank.
The first picture that comes to mind is a seriously corroded positive battery terminal. Ohm’s Law—adding resistance to a circuit powered by a given voltage (12 volts from the battery)—will reduce current flow (amperage). That dirty terminal produces a voltage drop. Say we have 12 volts coming out of the battery and we lose 6 volts at the terminal. The starter is now getting half the needed voltage to draw enough amps to efficiently run the starter and turn the engine. The result is a slow- or no-crank.
Corroded or loose connections in the starter circuit sometimes act up a little differently. Lights, radio, and all electric components are operating as designed. But when you turn the key and the high amperage to the starter begins to flow, a voltage arc is produced at the suspect connection. This can completely break the circuit, and it’s lights out everywhere.
Corroded or loose connections can affect starter operation anywhere in the starter circuit. Typically a heavy-gauge wire (cable) is routed to the starter directly from the positive terminal of the battery. But that’s only half the trip. To complete the circuit, we need continuity all the way back to the negative terminal.
Often, the cable from the negative battery terminal (ground) is bolted to the chassis. Now let’s think about this: The starter is bolted to the engine and the engine is suspended by rubber engine mounts, which act as insulators. So there’s no strong ground path from the starter back to the battery. That’s where a separate chassis-to-engine ground cable completes the circuit, and just like that corroded positive battery terminal, the same symptoms will result from high resistance. 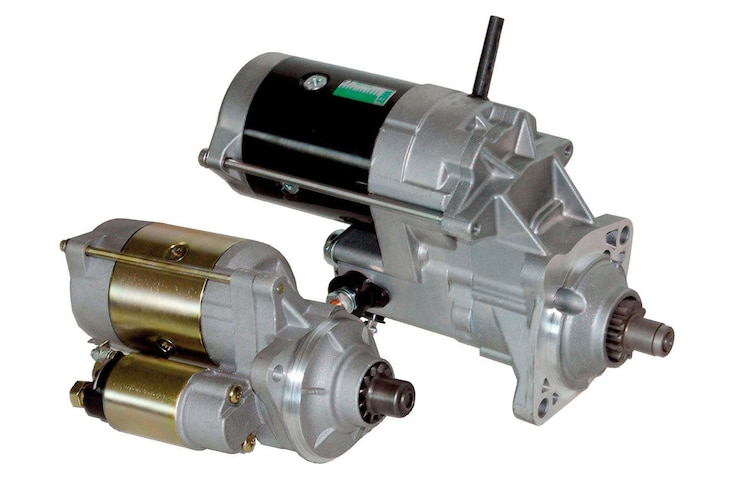 View Photo Gallery | 9 Photos
Photo 5/9   |   Shop Class No Start Starter
Of Course, the Starter
All this stuff we’ve been going over involves supplying the starter motor through its main circuit with the amperage it needs to spin and fire an engine. But starters fail, too.
Starter motors use a surrounding electromagnet (field coils) or permanent magnet against an inner/rotating electromagnet (armature). The opposing magnetic fields, when activated by current, produce rotation of the motor. When you turn the key, 12 volts from the ignition circuit are applied to the starter solenoid. The solenoid does two things: One is it extends the small starter drive gear so it meshes teeth with the engine’s flywheel (ring gear, torque converter, and so on). At the same time, it’s a heavy-duty relay that connects the positive battery cable to the electromagnet(s) within the starter. The gears are engaged simultaneously, battery power is supplied to the motor, and the engine cranks.
What’s goes wrong? A failed solenoid can engage the drive gear but not complete the connection from the battery. This produces a “click, click” from the starter when you turn the key, but no crank. An open circuit within the windings of the starter’s electromagnets can do the same thing. Numerous types of short circuits within the motor can produce no crank or slow crank with an excessive amperage draw. Back to Ohm’s Law: Less resistance with the same voltage increases current flow (amps).
Starter Activation
We mentioned the 12 volts from the ignition circuit applied to the starter solenoid that gets everything going, but that voltage doesn’t show up once in a while and, again, no crank.
It’s no secret that bad connections at multiple locations can kill the circuit. There may be a failed ignition switch, blown fuse, starter relay, bad powertrain control module, and the list goes on. But aftermarket security systems certainly don’t help.
As part of vehicle security, OEMs will use no crank, crank/no start (shut down the injectors), or both to disable ignition if it’s detected that an intruder is trying to start the car. Aftermarket systems lean more toward the simpler of the two and prevent starter operation. Low-quality electronic components, in addition to shoddy installation with poor circuit connections, put the non-OEM systems up on our high-risk, no-crank list.