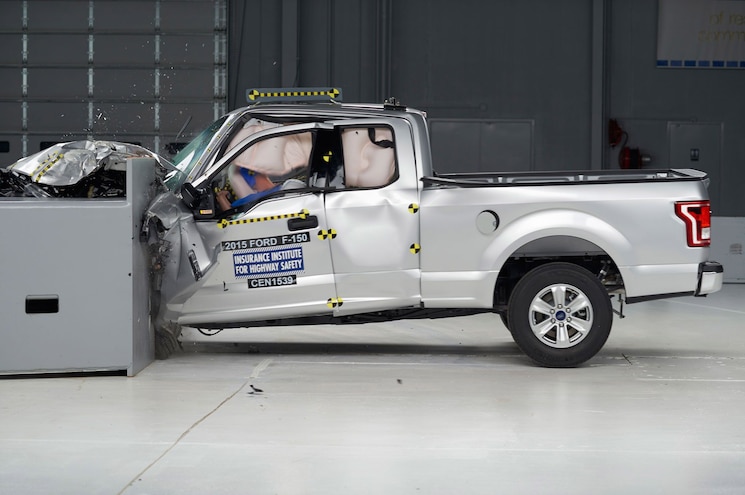 Protecting drivers and passengers during a collision has always been a challenge for automakers, but technology has made significant strides in safety since the early 1950s. But it all begins with the base structure of any vehicle.
Common sense tells us the bigger, the better. A 3/4-ton truck meeting head on with a compact car is a no-brainer as to who wins the battle. But the structural design of the body and frame or unibody may give the little guy a fighting chance.

In the earliest years of automobile production, the perception was the more rigid the structure, the safer the car. Meaning if you hit a concrete wall and the heavy-gauge steel up front was so strong that the front bumper barely moved, it would prevent occupants from being crushed inside the passenger compartment. Made sense at the time, but it didn’t take into consideration the assault on individuals by kinetic energy.
Kinetic energy is simply the force of motion. So a rigid structure striking a fixed wall at 50 mph will stop dead in its tracks, but the occupants are still going 50 mph. This results in ejection through the windshield, serious bodily injury from impact with the dash or steering wheel, or internal injuries resulting from organs sluicing through bones. 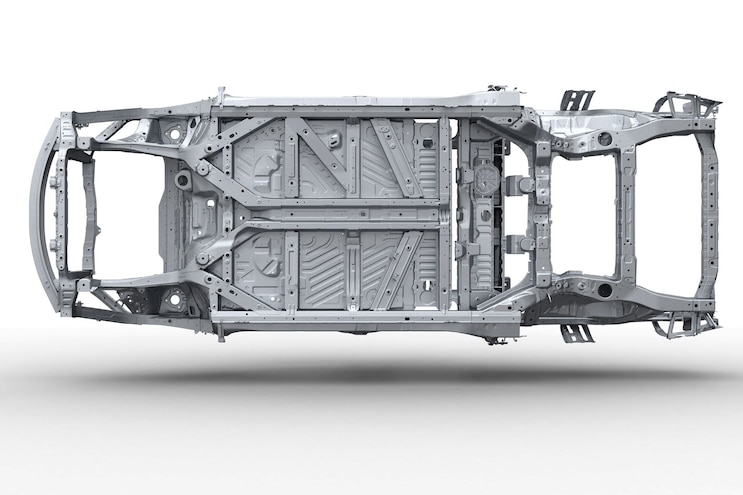 View Photo Gallery | 7 Photos
Photo 2/7   |   Shop Class Pickup Truck Crash Safety Devices Crumple Zones
In 1937, an Austro-Hungarian engineer named Béla Barényi patented the original “crumple zone” concept. Then working for Mercedes-Benz, his idea evolved, resulting in production of the ’59 Mercedes W111.
The design maintained a rigid passenger compartment to shield occupants, but added front and rear sections of the car that deformed (crumpled) on impact. This deformation absorbed kinetic energy during a collision and lessened the effect on occupants. Crumple zones have since been advanced through design modifications and use of materials, but Barényi was the guy behind it all.
Cushioned dashboards, doors structured for side-impact protection, and safety glass all add to the mix.

Another related vehicle safety feature that was conceived in the 1930s, but not deemed a U.S. manufacturer regulation until 1968, was the collapsible steering column.
Before then, steering columns consisted of a solid steel shaft connecting the steering wheel to the steering gearbox, which is bolted to the vehicle frame. During a high-speed collision, the solid column could produce fatal blunt-force trauma to the chest and head as kinetic energy projected the driver forward against the fixed steering wheel. 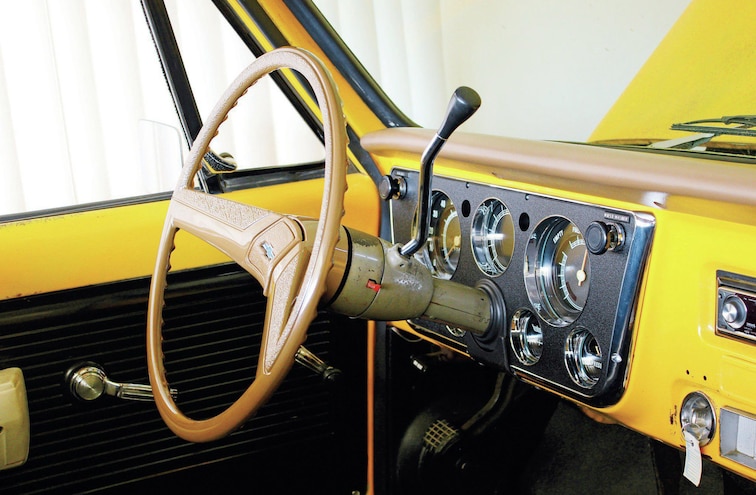 View Photo Gallery | 7 Photos
Photo 3/7   |   Shop Class Pickup Truck Crash Safety Devices Steering Column
There are currently multiple designs of collapsible columns, but they all share the same principle as a crumple zone in absorbing kinetic energy through deformation. A simple example is a column shaft constructed in two parts: an inner and outer sleeve. The sleeves are joined together with nylon shear pins. During normal operation, the two sleeves are secured together. On impact, the shear pins break and the inner sleeve collapses inside the outer sleeve, making the column half its original length and cushioning the driver’s impact with the steering wheel. At the same time, the two sleeves uphold a mechanical left and right connection to sustain steering control.

We started with vehicle structure, but a seatbelt is as important a safely device. In addition to deformation of the front end and column to absorb kinetic energy in a frontal crash, the seatbelt secured passengers to the seat, preventing ejection or subsequent contact with the dash or steering wheel.
Lap (or two-point) seatbelts positioned at the waist were first used in passenger-car production. This limited passenger ejection, but steering wheel and dash contact was still an issue, combined with spinal-column injury due to the passenger’s unrestrained upper body forced forward. 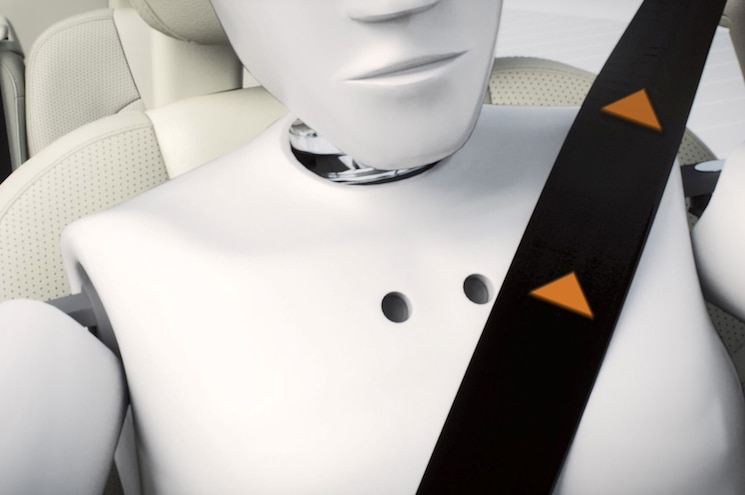 View Photo Gallery | 7 Photos
Photo 4/7   |   Shop Class Pickup Truck Crash Safety Devices Seat Belt
The first standard three-point belt was part of the ’59 Volvo 122. The addition of a belt crossing the chest significantly aided in securing passengers to the seat. Today, three-point belts are used throughout the industry, along with retractors for ease of use and pretensioners to pull the occupant up against the seat during a wreck.
Head restraints also play a safety role at the seat, especially during a rear-end collision. Supporting the back of the head reduces the violent rocking back and forth that causes neck injuries (whiplash).

An airbag is considered a passive restraint as opposed to a seatbelt. While a seatbelt requires action by the occupant to buckle up, airbags function automatically. A new system to cushion occupants from the dramatic effects of kinetic energy during a collision, airbags brought vehicle safety to a new level. 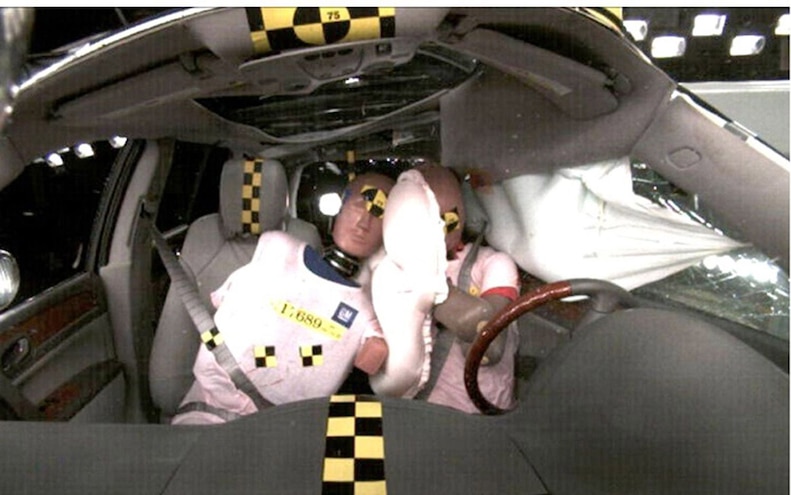 View Photo Gallery | 7 Photos
Photo 5/7   |   Shop Class Pickup Truck Crash Safety Devices Air Bags
By electronically igniting a chemical charge, gases expand and inflate a fabric bag to cushion occupants during a crash. The ignition command comes from an electronic control unit, triggered by impact sensors and following an algorithm using additional data inputs (vehicle speed, braking, which impact sensors were activated, and so on).
Airbags were used commercially in motor vehicles in the 1970s, but they didn’t really catch on until the early 1990s. It began with a single driver’s unit in the steering wheel, but has expanded throughout modern cars and trucks (passenger, side curtain, seat mounted, knee bolster, and still adding on). Although airbags will deploy without the use of a seatbelt, the advantage decreases significantly.

All of the above deals with protection during a crash, but how about avoiding the crash altogether?
Who remembers driving a truck with four-wheel drum brakes? They didn’t stop worth a damn compared to disc. Part of the reason was heat dissipation. Brake fade occurs when the linings (pads or shoes) overheat and brake effectiveness is drastically reduced. Drums surrounding shoes don’t give off heat nearly as efficiently as pads on discs open to outside air. So brake fade happens more readily with drums during high brake demand such as long-term downhill driving. Of course, engine braking should always be used in that type of situation.
There are still vehicles produced today with drum brakes in the rear because most braking is needed up front, and drum brakes are cheaper than disc. 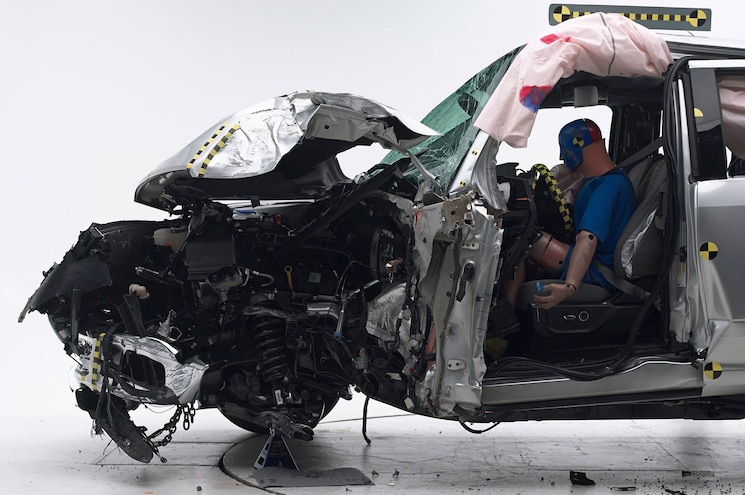 View Photo Gallery | 7 Photos
Photo 6/7   |   Shop Class Pickup Truck Crash Safety Devices Crash Test
Antilock or antiskid braking systems go back to the 1950s in aviation use. The first electronic system was developed in the 1960s for the supersonic Concorde transport.
ABS delivers two major advantages. In most situations, it can reduce braking distance, but just as important, it helps maintain steering ability during as skid.
Snow or ice is a good example. No ABS, go straight ahead and slam on the brakes, all four wheels lock up and you slide in the direction the vehicle was traveling. Turning the wheel left or right has slim to no effect in altering direction.
The ABS ECU views the speed of each wheel. When it sees “0 mph” at a particular wheel, it blocks the hydraulic pressure induced by your foot on the brake pedal. Using electrically controlled valves (modulator), the system rapidly blocks and releases pressure to prevent lockup of that wheel. This in turn maintains enough traction at the front wheels to alter the path of the vehicle with steering.

Electronic Stability Control is often used in conjunction with ABS and Traction Control systems. It boils down to preventing understeer, oversteer, and rollover during low traction and/or excessive speed conditions to prevent a crash.
The opposite of ABS, ESC and traction control rapidly apply instead of blocking brake pressure to wheels individually. Along with reducing electronic throttle application and incorporating additional data inputs, the system does a great job of keeping a vehicle on the road. 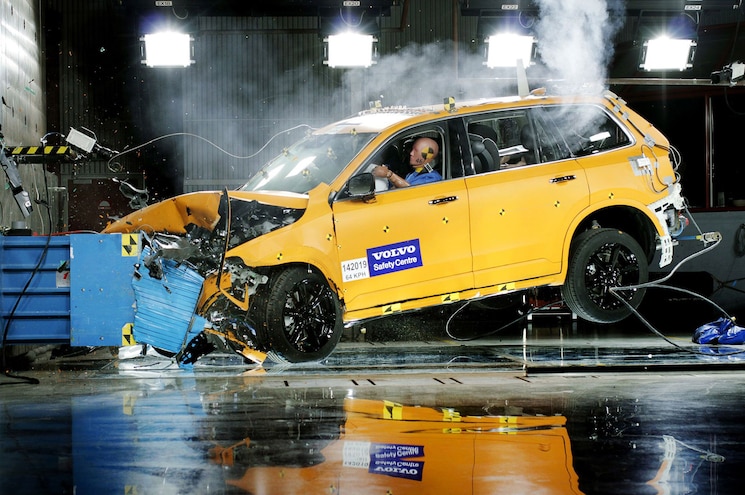 Like it or not, vehicle safety technology is on a path toward self-driving cars. We’ve seen test examples and, hopefully, learned development is not quite there yet.
We’re getting hints of the self-driving concept from sub-systems already being used in everyday production, many requiring radar, sonar, optical, and GPS sensing.
Lane-departure systems can warn the driver when the vehicle is wandering out of its lane or automatically steer it back in line. Automatic braking systems emit an audible and visual warning prior to hard braking when an imminent crash is detected, and both systems are becoming widespread in new-car production.
Automatic parking has been out for a while to assist through automated steering (while the driver handles gears, gas, and braking). Remote-control parking is in its early stages, where the driver controls it from outside the vehicle and the automated systems deal with the rest, but it’s limited to straight forward and back in and out of tight spaces.