Your Diesel Questions Asked and Answered

You’ve Got Questions, We’ve Got Answers 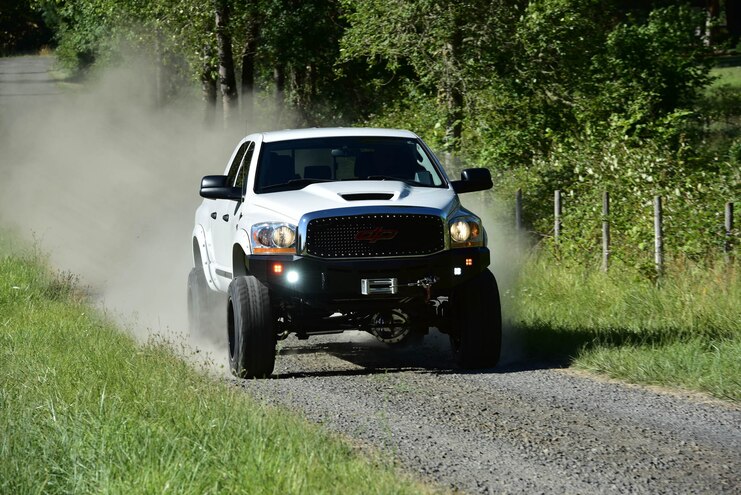 Baby DMax Biofuel
QUESTION: Chevrolet says the 2.8L Duramax LWN engine in my '17 Colorado is B20 compatible. What would happen if I ran it on a fuel with more bio than that? Why not B100? (I'd love to start home brewing.) What mods would be necessary to burn B100 in a 2.8L Duramax?
Marc Simpson
via email 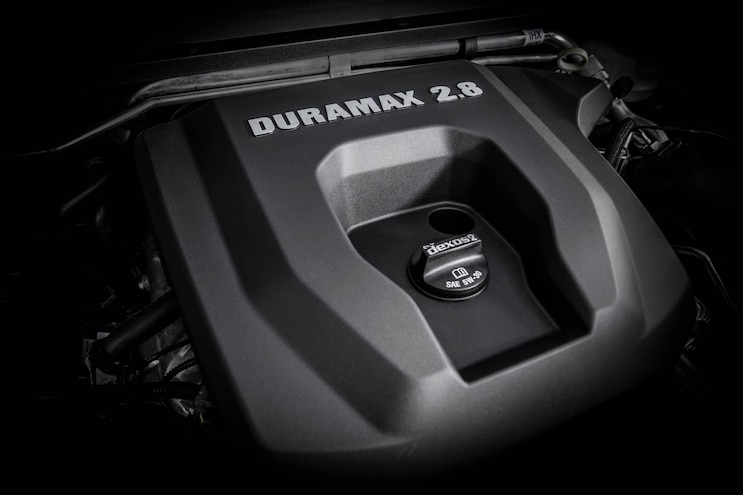 View Photo Gallery | 6 Photos
Photo 2/6   |   Using biodiesel fuels in engines that exceed the factory recommendations, such as using B100 instead of B20 in the GM 2.8L Duramax LWN, can lead to serious fuel-related mechanical issues and void the factory warranty.
ANSWER: First, it's important to understand that B20 and B100 diesel fuels are as different as apples and oranges. A decade ago, many diesel owners were asking the same questions with hopes of becoming biodiesel moonshiners. A white paper on the topic was written by the National Biodiesel Board (biodiesel.org) entitled "Guidance on Blends Above B20." According to that detailed report, B100 has a number of shortfalls that should discourage any owner of a modern diesel from using home-brewed biodiesel fuel like the proverbial plaque. Among B100's shortfalls are: cold flow properties where B100 starts to gel around 32 degrees (or warmer) Fahrenheit; B100 softens and degrades certain types of elastomers and rubber compounds over time, like those found in older trucks' fuel systems; B100 acts as a cleaning solvent that can dissolve any sediments left in the fuel tank and lines from #2 diesel fuel, clogging fuel filters; B100 has stability and degradation issues, so it has to be used shortly after it's made and shouldn't be stored for more than six months; B100 has about a 9 percent lower energy content than #2 diesel, which has a negative impact on both power and fuel economy; and blends higher than B20 can cause a large amount of unburned fuel to make its way past the piston rings and into the oil pan because the biofuel's viscosity is higher than B20 or #2 diesel fuel; use of B100 can also lead to engine oil sludge problems; B100 adversely affects lead, cast iron, zinc, and tin. Luke Langellier at S&S Diesel Motorsport says, "B100 users should also be aware it can create issues with common rail fuel systems, primarily due to how it interacts with water. Rather than moisture in the tank settling out, biofuel tends to carry the water in suspension and transport it through the rest of the system. It's not uncommon for us to get injectors or pumps in for testing that have been sitting for an extended period of time, and corrosion or scaling has occurred in the components, ruining them. We can often tell by appearance and smell if they had biodiesel." So, all these concerns need to be considered if you plan on home-brewing B100, including controlling impurities and variances in quality from batch to batch.
Maximizing MPG
QUESTION: I own an '06 Ford F-250 and want to know how I can obtain better fuel economy than the 13.5 mpg town/highway I'm seeing from the 6.0L Power Stroke engine. The only things I have added are a 4-inch straight pipe from the turbocharger back and Gearhead's SLR+ ECM tune. I've also added a 4.5-inch lift with 35x12.50R20 tires. Axle gearing is stock 3.73.
Jake Roberts
via email 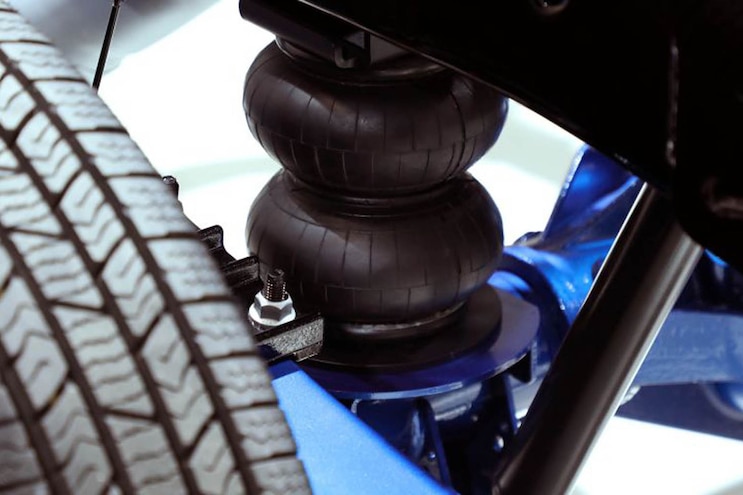 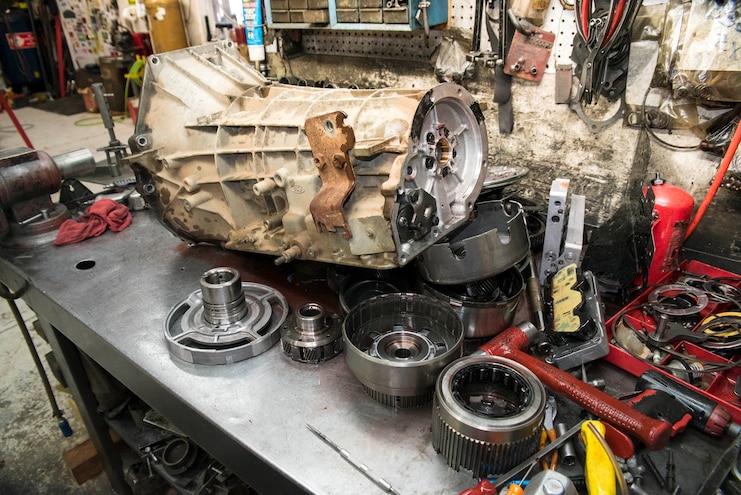 View Photo Gallery | 6 Photos
Photo 5/6   |   E4OD four-speed automatic transmissions were used in Ford trucks from 1989 to 1997. During that time, they went through many internal design changes, especially in the latter years, to accommodate the first 7.3L Power Stroke engines. E4ODs evolved into the 4R100, which makes it easy to rebuild an early F-250 or 350's transmission into a very strong hybrid E4OD/4R100.
ANSWER: Those early E4ODs, used in Ford trucks and Broncos from 1989 to 1997, went through several internal-design changes, especially in the latter years. The transmissions from '94 models and into mid-'97s saw the biggest modifications, because they had to handle the torque of the turbocharged Power Stroke diesel engines. Those modifications finally led to the E4OD evolving into the 4R100. According to Phil Mitchell, the lead technician and E4OD/4R100 rebuilder at Geezers Garage in Coburg, Oregon, it's easy to rebuild your early E4OD into a very strong hybrid E4OD/4R100. He's rebuilt more than 1,000 of those generation Ford automatics during a couple of decades working for AAMCO, and now at Geezers Garage. Phil suggests using a mix of "like-new" used '97 Power Stroke E4OD and '98 4R100 components to replace some of the weaker parts common to the '89-to-'95 F-150/F-250/Bronco transmissions. One of the most critical upgrades on any pre-'95 E4OD is replacing the center support and center shaft with parts from a '97 E4OD or any 4R100. Another critical upgrade is replacing the stock E4OD aluminum planetary gears found in those early E4ODs with steel versions found in 4R100s and Super Duty E4ODs. He also suggests using high-performance 4R100 Alto PowerPacks that have Red Eagle frictions and Kolene steels for all the clutches, along with installing a good shift kit like the "Tugger" from TransGo. Installing an F8 pump and TransGo 4R100 LU boost valve, replacing the three-friction E4OD direct drum with a four-friction version from a V-10 4R100 transmission, and replacing the two overdrive clutch steels and frictions with four thin ones make a world of difference. Doing this kind of hybrid rebuild will give you a stout '97 Power Stroke E4OD/'98 Super Duty 4R100. Along with the rebuild, you should look into installing a matched torque converter. TCI Automotive's "E4OD Maximizer" might be a good option for this particular application. Make sure you use Mercon/Dextron III ATF, too, as using the wrong transmission fluid will quickly destroy the clutch frictions.
7.3L Hiccup
QUESTION: I have an '02 Ford F-250 with 131,000 miles on it. The Check Engine light comes on when the engine is started and it runs rough—almost as if it has a problem with the injectors. I had the diagnostic trouble code (P1316/injector module) cleared, but it keeps coming back. If I drive 15 to 20 miles, the engine smooths out and the Check Engine light goes away. This is very puzzling. Could something be amiss with the wiring harness for the injectors or the injector drive module?
Jason Robbins
via email 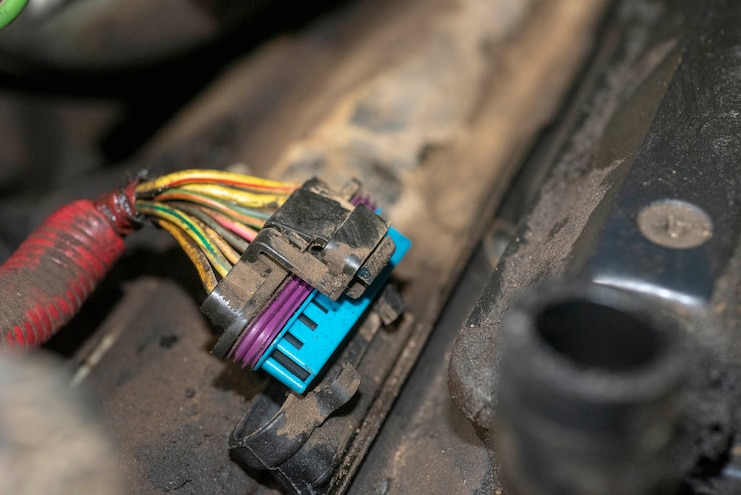 View Photo Gallery | 6 Photos
Photo 6/6   |   A common trouble issue with 7.3L Power Stroke engines is loose connections at or in the under valve cover harness that controls the injectors and glow plugs. A scan tool is the best way to check the integrity of the UVCH. But an ohm-meter can also be used. If the two outer pins read 0.8 to 2 ohms, it's good. The next two toward the center pin should read less than 5.0 ohms.
ANSWER: The P1316 diagnostic trouble code just lets you know there are additional codes stored in the injector drive module. "You need a scan tool capable of performing an injector electrical test (buzz test)," says Kenneth Tripp of Tripp Trucks. "When you run the buzz test, it will display codes stored in the IDM. Only then can you properly diagnose the problems." Kenneth says a last-resort test sans the proper scan tool is disconnecting each harness plugging into the valve cover gasket and checking the pins with an ohm-meter or test light. With the test light lead connected to the Positive post (+), touch each of the outer two pins both on the left and right sides of the valve cover gasket itself. Doing so checks the injectors-to-glow-plugs connection. If the connection is completely broken, the test light shouldn't light. Kenneth warns that if the truck is of higher mileage and it has faulty glow plugs, this way of testing could send you on a diagnostic goose chase. The integrity of the under valve cover harness can also be checked with an ohm-meter. Use the meter to check the two outer pins on each side as noted above. They should read 0.8 to 2 ohms. The next two toward the center pin should read <5.0 ohms. If no test light or ohm-meter is available, remove the driver-side valve cover and inspect the injector-to-glow-plug harness and its connection with the valve-cover gasket. The '99-and-up harnesses, although redesigned to one single connector to "fix" the '94 -to-'97 7.3L engines, are prone to melting the connectors and gaskets and becoming disconnected under the valve cover. If this is the case, Ford sells a retainer clip kit to fix this (2C3Z-14A163-AB). Kenneth says "No, you don't have to replace the gasket and injector harness. Just install the new retainer clip kit." If the harness is bad, use the OEM replacement, not an aftermarket version, because Ford's has the locking clip and provisions to keep the valve cover from damaging the harness when it's bolted back on. While you are looking at the valve cover and connections, make sure the bolt-together connection, where the harness goes directly over the driver-side valve cover, isn't rubbing on the cover, creating an intermittent short. Obviously, a harness connection concern isn't the only possibility of what is causing your engine's issues. It could also be a faulty IDM, wiring harness, or injector coils. (Check out our 7.3L "Top-End Reseal" article on this topic: trucktrend.com/how-to/engine/1706-tips-to-make-ford-7-3l-top-end-re-sealtune-up-easier/).