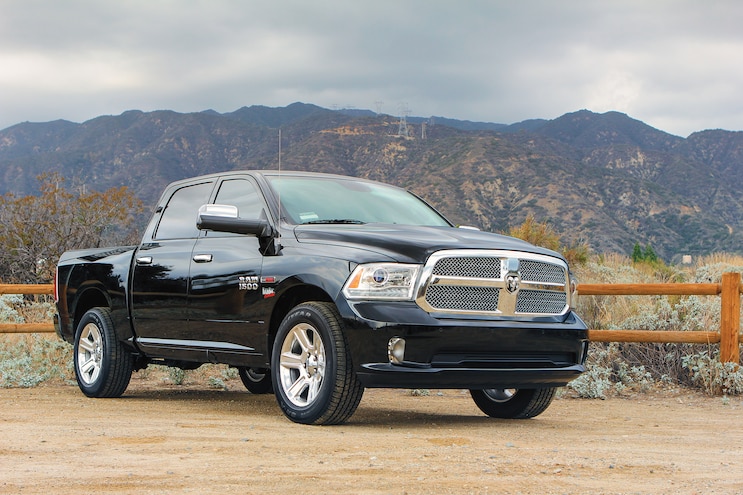 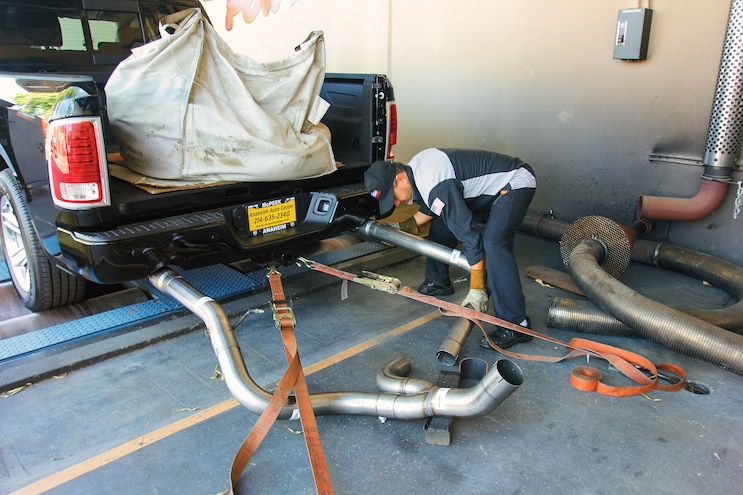 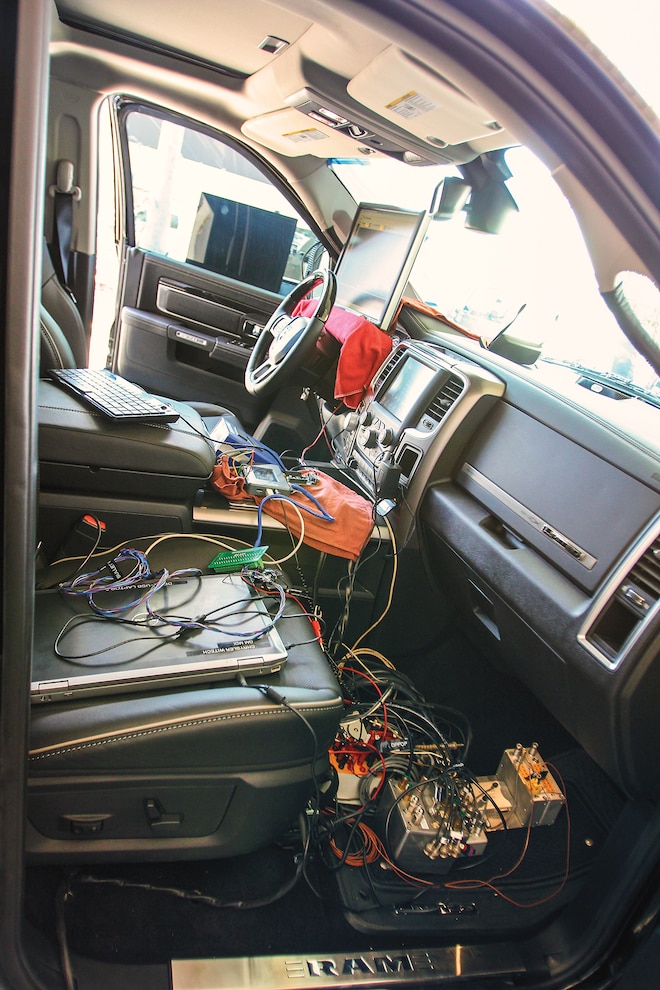 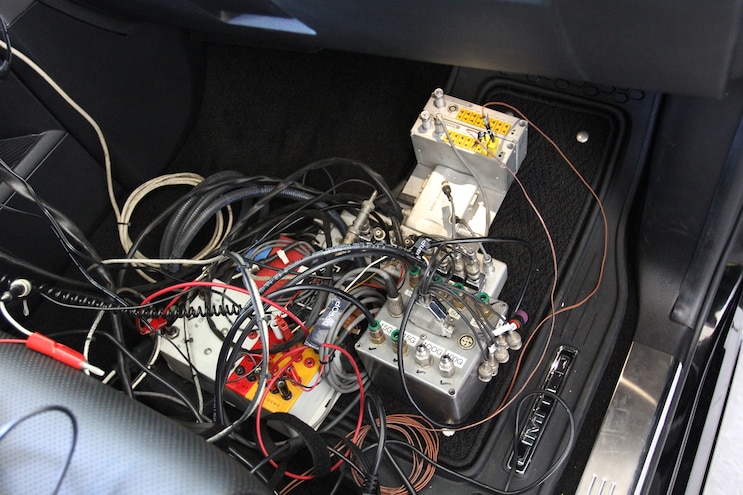 View Photo Gallery | 27 Photos
Photo 4/27   |   06 2015 Ram 1500 EcoDiesel Data Collection Equipment
Numerous sensors (see list) are fed into a voltage box, a pressure transducer module, a thermocouple junction box, and a data transfer unit that sends all the information to a laptop computer for logging. Information is provided to the setup using the custom probes and gauges, along with readings taken from the truck’s on-board diagnostics (OBD-II) and controller area network (CAN Bus) systems. 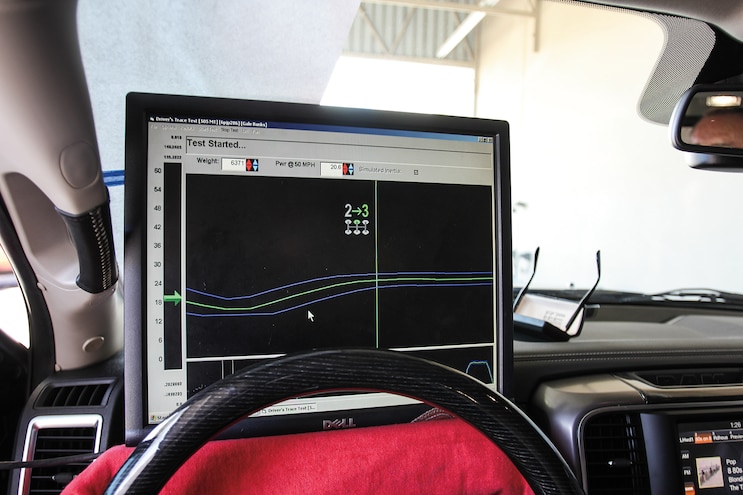 View Photo Gallery | 27 Photos
Photo 5/27   |   07 2015 Ram 1500 EcoDiesel FTP 75 Emissions MPG Testing Screen
Between tests, the crew in the emissions lab let us take a turn manning the throttle during a fuel economy test simulation. The goal is to keep the green arrow as close to the green line as possible without hitting the blue lines. We did OK for almost 2 minutes before the arrow turned yellow and then a simulated decline put us into the red, which would have voided a real test. We were told that technicians who can’t keep the arrow green don’t last long as emissions testers. 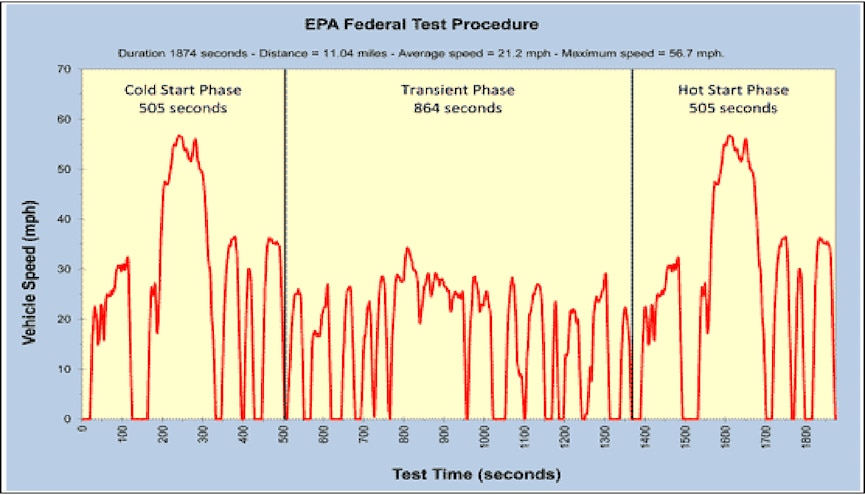 View Photo Gallery | 27 Photos
Photo 6/27   |   09 EPA FTP 75 Federal Driving Cycle Test Proceedure Graph
The EPA’s Federal Test Procedure for simulated city driving is called FTP-75, and it takes more than half an hour to perform. It puts vehicles through a simulation of driving 11.04 miles with an average speed of 21.2 mph and a maximum speed of 56.7 mph. If you spend too much time outside the boundaries, a truck or car has to cool down completely before another attempt at running a full test can be made. 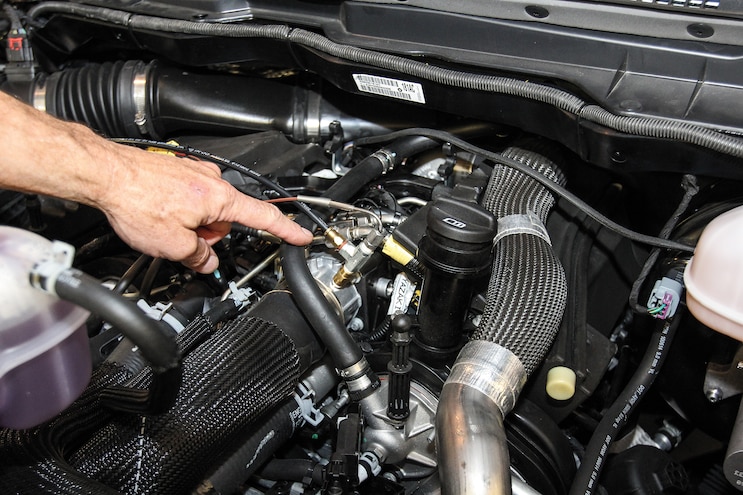 View Photo Gallery | 27 Photos
Photo 7/27   |   08 2015 Ram 1500 EcoDiesel Underhood Boost Pressure And Temperature Gauges
One of the many custom sensor setups installed by the team at Banks is this combination of a pressure gauge and temperature probe to measure the pre-throttle intake charge. 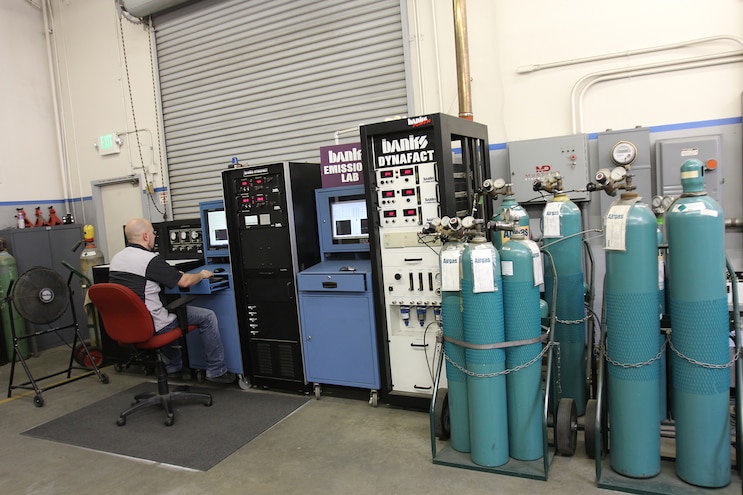 View Photo Gallery | 27 Photos
Photo 8/27   |   10 Banks Power Emissions And MPG Lab Equipment
The Banks Dynafact system is used to measure emissions, which tell the technicians how much fuel is used during the FTP-75 test. After each dyno run, the gas tanks on the right are used to recalibrate the equipment.
More Power, Torque, and Boost
Performance measurements were gathered using a chassis dyno that’s rated to handle more than 1,500 lb-ft of torque. In stock form, the Ram EcoDiesel made a maximum of 215 hp and 367 lb-ft of torque at the rear wheels (the factory’s crankshaft ratings are 240 hp and 420 lb-ft). The Stinger System is a straightforward setup consisting of improved intake and exhaust parts, along with a programmer for the 3.0L V-6 diesel engine. Lessons learned during the development of the Banks 630T engine (based on the VM Motori design used in the Ram 1500 pickup and the Jeep Grand Cherokee) helped engineers develop a package that delivers a nice improvement in horsepower, torque, and turbo boost.
The kit includes: a drop-in Ram-Air filter, an aluminum Silencer Delete Tube (that gets rid of the factory’s insulated and constrictive flattened plastic tube, which quiets the sweet sound of the turbo), a 4-inch cat-back Monster Duals exhaust system (to reduce exhaust gas temperature and reduce backpressure) with stainless tips available in chrome or black (a single-tip exhaust setup is also available), and the Banks Bullet engine tuner along with an A-pillar mounting pod. The programmer has calibrations for three on-the-fly power levels (Stock, Tow, and Sport) and also works as a display for boost and fueling levels. Once the truck had all the parts installed, the Ram was strapped down on the chassis dyno again and made 252 hp and 413 lb-ft of torque—a measured improvement of 37 hp and 46 lb-ft of torque over stock. In addition to the added performance, the peak boost was improved from 24.6 psi up to 26.1 psi, which should be useful for drivers accelerating from a dead stop and during passing maneuvers.
Quicker 0-to-60 and 40-to-60-mph Times
It was no surprise when testing showed the Ram’s acceleration improved with the Stinger System set in Sport mode. While stock, the ½-ton ran from 0 to 60 mph in 9.88 seconds, but the upgrades dropped that time to 8.98 seconds. Acceleration from 40 to 60 mph also improved with a time of 4.38 seconds compared to 4.96 seconds without the modifications.
More MPG
The Ram EcoDiesel already returns the best fuel mileage of any ½-ton truck with ratings of 21 city/24 combined/29 highway mpg for two-wheel-drive models and 19/22/27 with four-wheel drive. An EPA Federal Test Procedure, FTP-75, is a dyno-performed operation that measures a vehicle’s city driving cycle by comparing emissions output to fuel usage. It takes more than half an hour to perform and puts a car or truck through a simulation of driving 11.04 miles with an average speed of 21.2 mph and a maximum speed of 56.7 mph. Dyno runs using the FTP-75 emissions test showed the Stinger kit can improve the truck’s fuel economy.
The technicians at Banks Power had to construct a custom exhaust-catching setup for the Ram Limited’s dual outlet exhaust (which is possibly the first factory-offered dual setup available on a diesel pickup sold in the U.S.—email us if you know about a predecessor). As the man running the equipment tells us, “Carbon goes into the engine as fuel, and it has to come out, so it’s just a matter of reading how much diesel is burned to gauge the fuel economy.” In stock form, the truck got 21.16 mpg, and in Sport mode it achieved 23.82 mpg—an increase of 2.66 mpg. This rating combined with the added power, torque, and boost, showed us how the Stinger system unlocks plenty of extra potential from the ’14-to-’16 Ram 1500’s 3.0L EcoDiesel engine. View Photo Gallery | 27 Photos
Photo 10/27   |   01 2015 Ram 1500 EcoDiesel With Banks Stinger Front Side View
Banks Power bought this ’15 Ram 1500 EcoDiesel to be a shop truck and testbed for 3.0L V-6 performance products. The team managed to find an early model year pickup with the Limited trim that includes the traditional crosshair grille design seen here, unlike late ’15 and ’16 trucks with the new, unique fascia and gigantic “RAM” lettering on the tailgate. 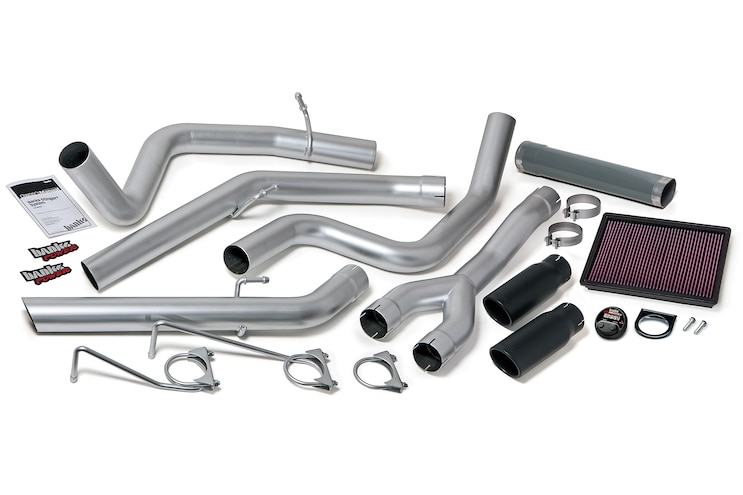 View Photo Gallery | 27 Photos
Photo 11/27   |   02 Ram EcoDiesel Baks Power Stinger System Upgrades
Ram-Air drop-in filter for the factory airbox, a high-volume turbo Silencer Delete Tube (the gray part in the top right of the photo), and a 4-inch cat-back Monster Exhaust. The kit is also available for EcoDiesel trucks that come with a single exhaust, and it can be ordered with the high-temperature, black-coated, stainless steel exhaust tips shown here or chrome tips such as those used in this project. 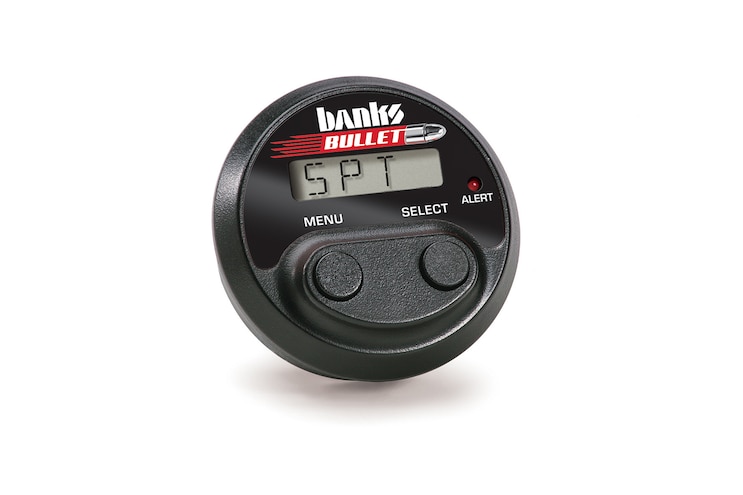 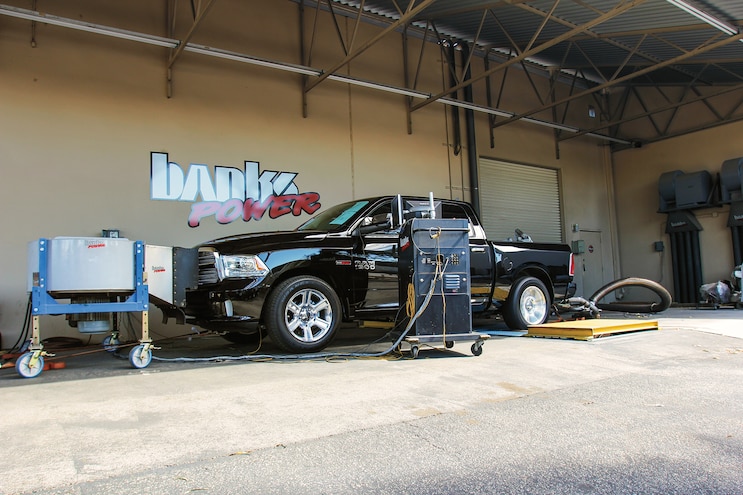 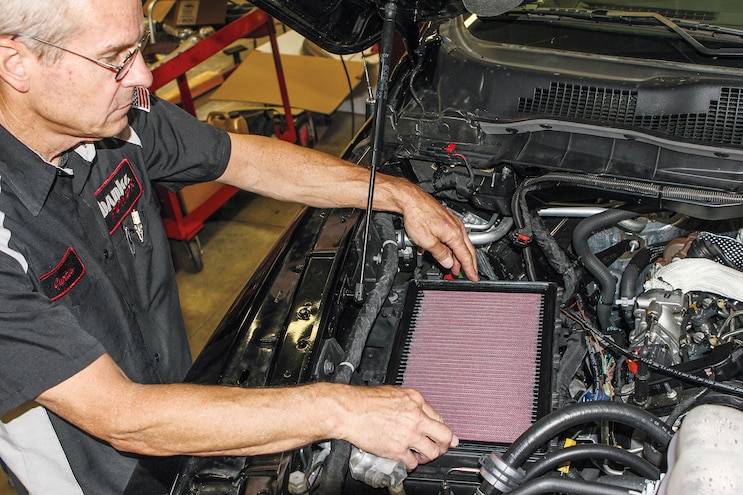 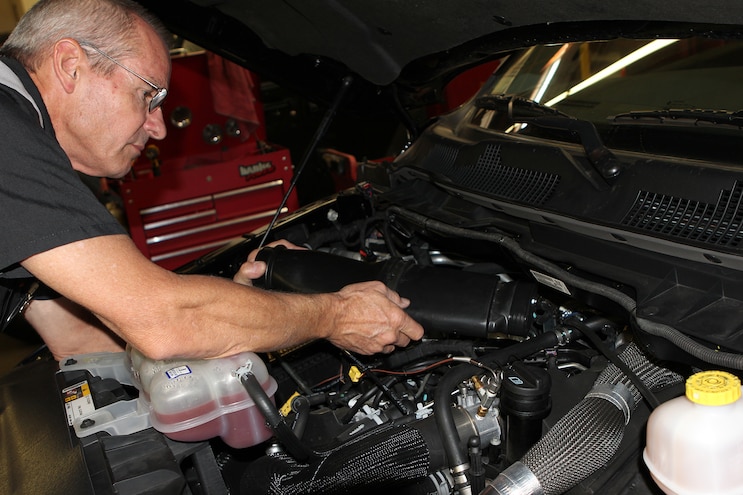 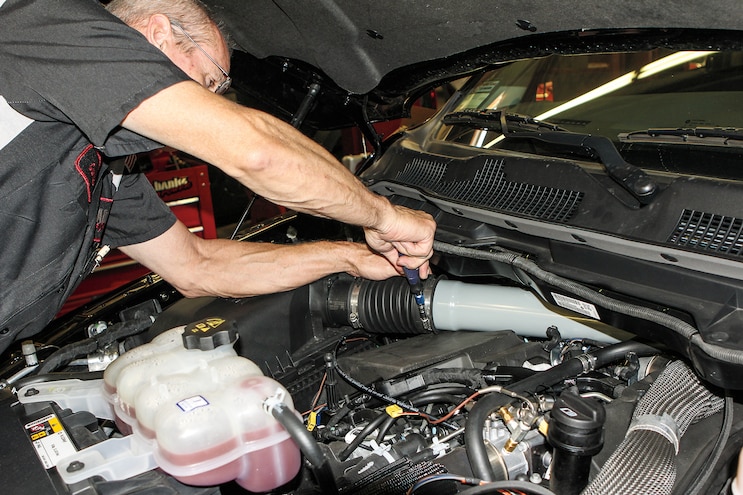 View Photo Gallery | 27 Photos
Photo 16/27   |   14 2015 Ram 1500 EcoDiesel Banks Power Stinger System Intake Silencer Delete Tube Installation
The Stinger System includes a Silencer Delete Tube that replaces the restrictive factory part with a custom aluminum pipe for improved airflow while increasing the sound heard from the turbo. We doubt fans of Diesel Power will mind the added “noise.” Along with the air filter, exhaust system, and programmer, this part helps to increase the maximum boost from the stock level of 24.6 psi up to 26.1 psi. 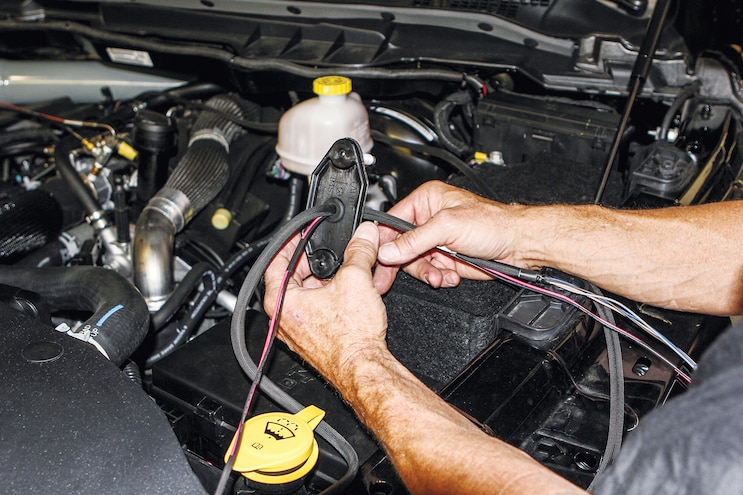 View Photo Gallery | 27 Photos
Photo 17/27   |   15 2015 Ram 1500 EcoDiesel Banks Power Stinger System Bullet Tuner Wiring
The Banks Bullet power programmer is connected under the hood to the manifold absolute pressure (MAP) sensor, the fuel rail pressure (FRP) sensor, and a power source in the fuse box. The factory clutch master cylinder plate is used as a pass-through for all the wiring after a 13/16-inch hole is drilled for access. 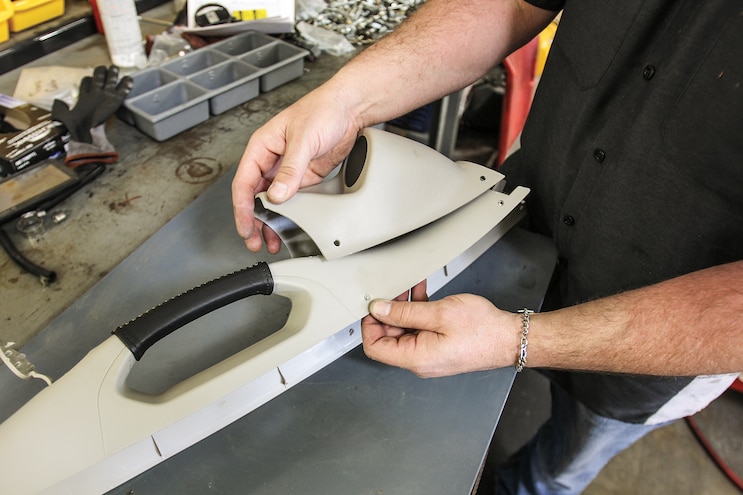 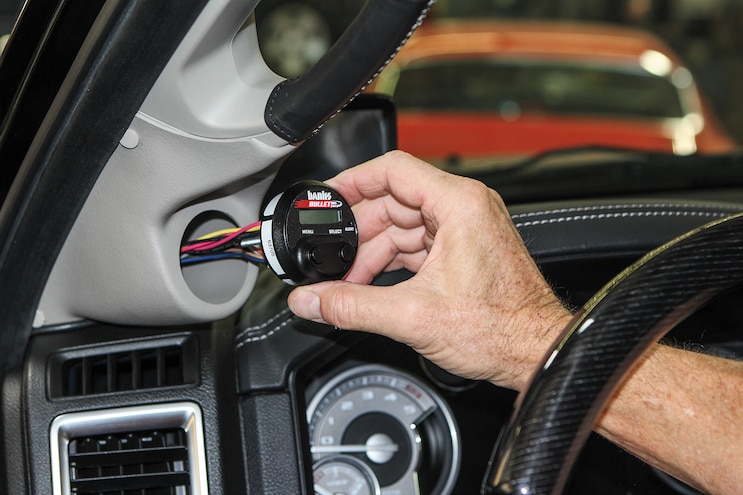 View Photo Gallery | 27 Photos
Photo 19/27   |   17 2015 Ram 1500 EcoDiesel Banks Power Stinger Sytem Bullet Tuner A Pillar Installation
Once the pod is attached to the A-pillar, wiring is routed from the firewall and attached to the programmer. 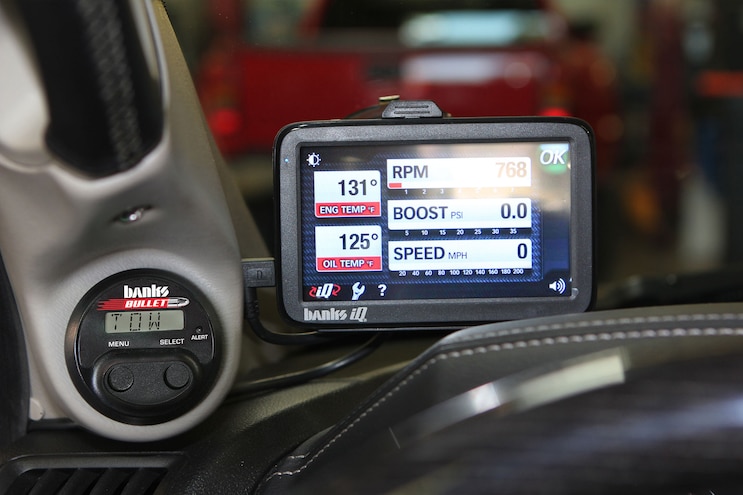 View Photo Gallery | 27 Photos
Photo 20/27   |   18 2015 Ram 1500 EcoDiesel Banks Power Bullet Tuner And IQ Monitor
The Bullet has three performance settings (Stock, Tow, and Sport) that can be changed while driving, along with a temperature-limiting safety feature. It can be used to display boost or fuel pressure and can be combined with the Banks iQ monitor shown here (not included with the Stinger System). 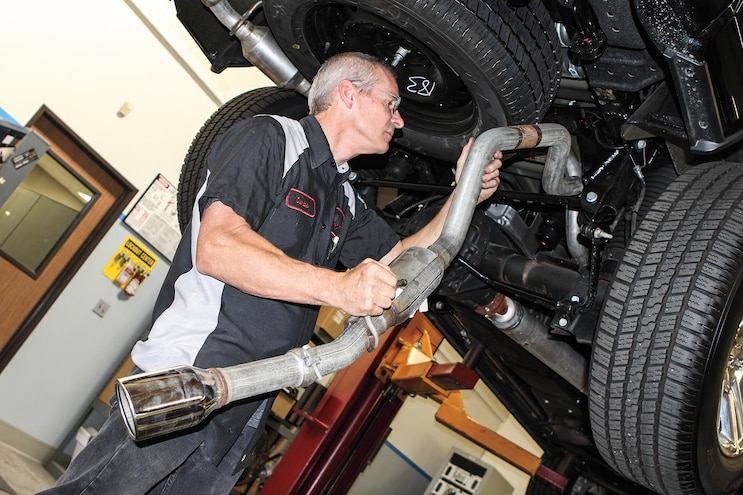 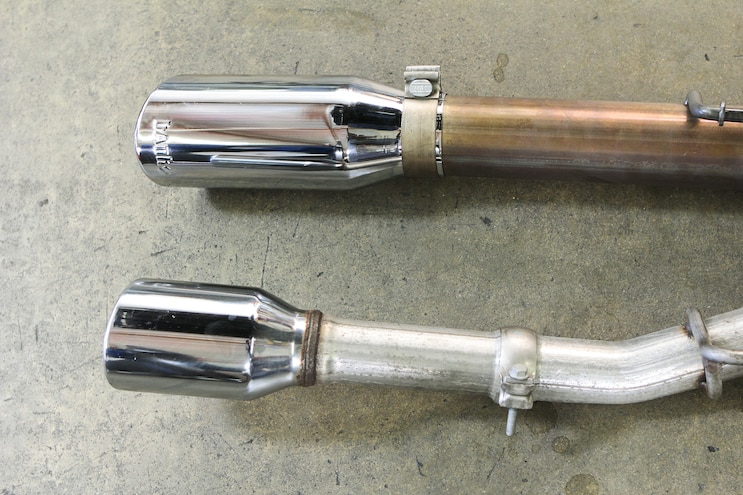 View Photo Gallery | 27 Photos
Photo 22/27   |   20 2015 Ram 1500 EcoDiesel Banks Power Monster Exhaust Versus Stock Exhaust
The Monster Exhaust uses mandrel-bent 4-inch–diameter intermediate pipes that are much larger than stock and comes with custom hangers for installation. The longer stainless steel exhaust tips are available in the chrome finish seen here or with a high-temperature black coating as shown in the photo of parts included in the Stinger kit. 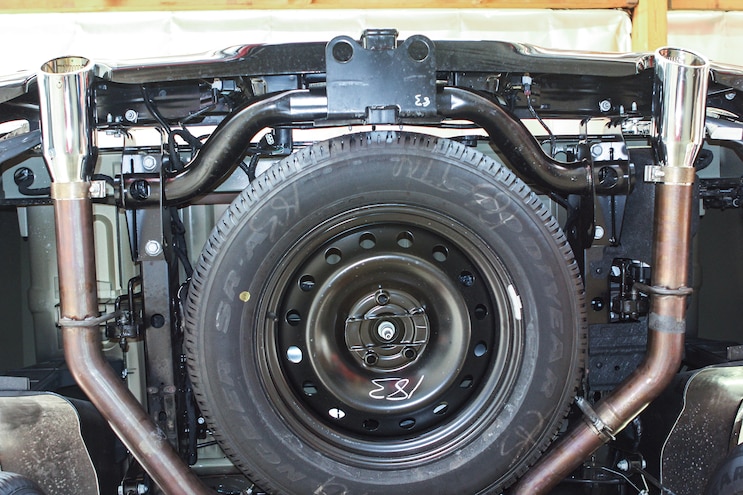 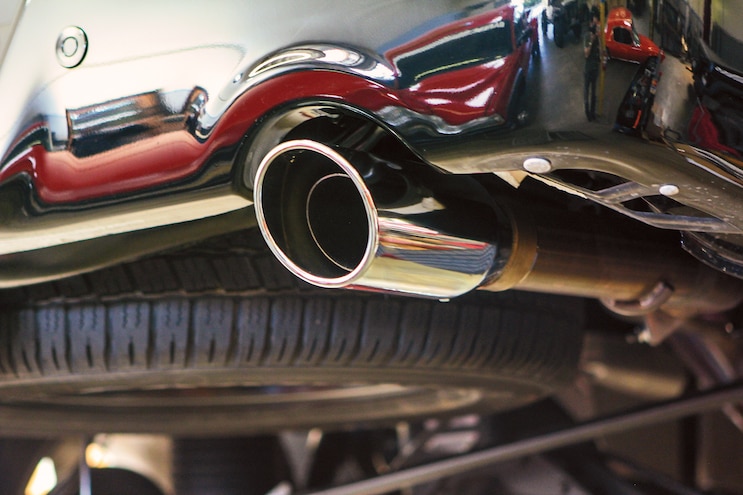 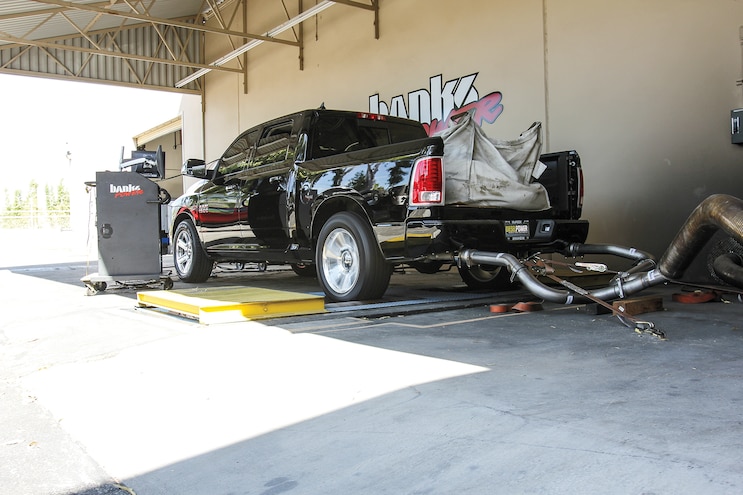 View Photo Gallery | 27 Photos
Photo 25/27   |   23 2015 Ram 1500 EcoDiesel Dyno Run With Banks Power Stinger System Installed
With all the Stinger System parts installed, the Ram EcoDiesel was put back onto the chassis dyno. Multiple runs with the Sport tune selected showed the truck made a maximum of 252 hp and 413 lb-ft of torque at the rear wheels. That’s an improvement of 37 hp and 46 lb-ft of torque over stock, along with an FTP-75 projected improvement in city driving fuel economy of 2.66 mpg. 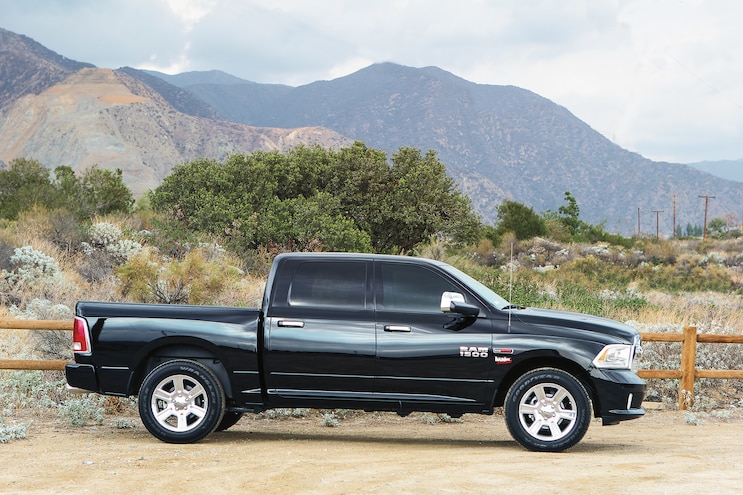 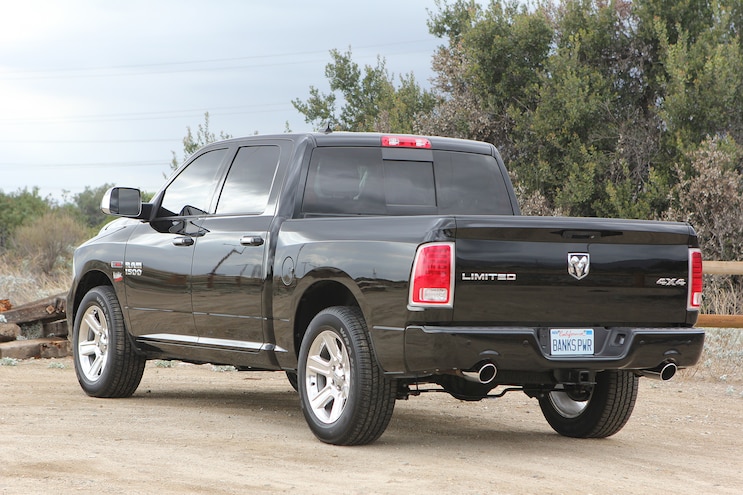