Turbocharger insights for those who are new to boost. 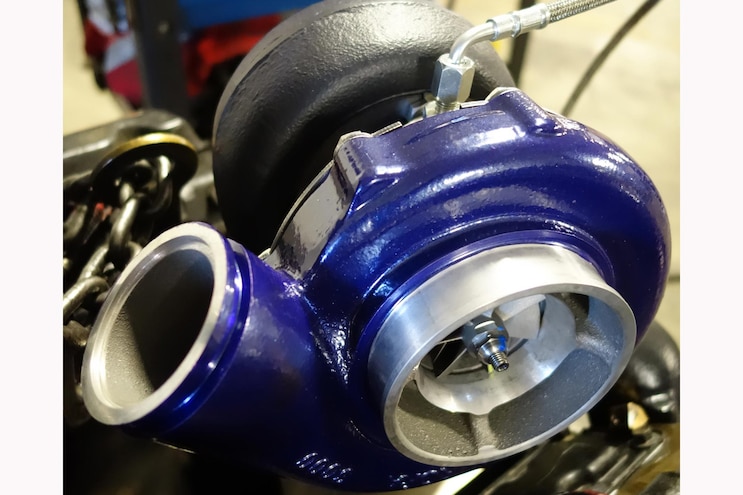 Learn More Here!
What Is Diesel Blow-By?
What Is Diesel Runaway?
How To: Rebuild Your Own Turbo
In most performance-diesel circles, turbochargers arguably are an oil-burner's most important component. To many enthusiasts, size matters—a lot—as we often see trucks with incredibly large single-turbo setups, or rigs featuring multiple 'chargers, installed in an effort to achieve the most horsepower and torque that an engine will support.
From a factual, technical standpoint, big is not necessarily better with regard to turbos, as maximizing an engine's air (intake and exhaust) efficiency ultimately is essential for making power. As a rule of thumb, put the horse before the cart, and build an engine that makes good power, before adding the turbo(s). Insane boost pressure of big or multiple turbochargers does not automatically guarantee efficiency, so, we feel a well-designed engine still reigns as the No. 1 piece of the performance puzzle.
Selecting the correct turbo system ('charger size) for any truck's engine involves performing a non-painful math calculation, after determining the engine's naturally aspirated, and required airflow (both in cfm) and then dividing the required airflow by the engine's NA number. This will yield the boost-pressure ratio for the engine (the ratio of boost pressure to atmospheric pressure). 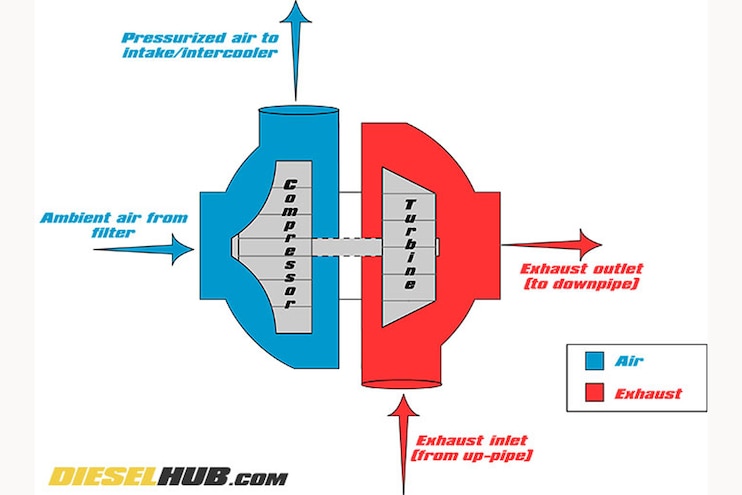 View Photo Gallery | 7 Photos
Photo 2/7   |   004 Top Turbo Questions And Terms
For some enthusiasts, despite understanding the basic principles of turbocharging any engine, let alone a diesel, there also are terms and theories that fall into a gray area of sorts and require clarification—especially for newcomers to the hobby. With photo assistance from our friends in the turbo and diesel space—Precision Turbo & Engine and Dieselhub.com—we hope this report leaves those folks with a little more awareness and answers to a few questions that are often asked about turbocharging.

What Does A/R Mean? 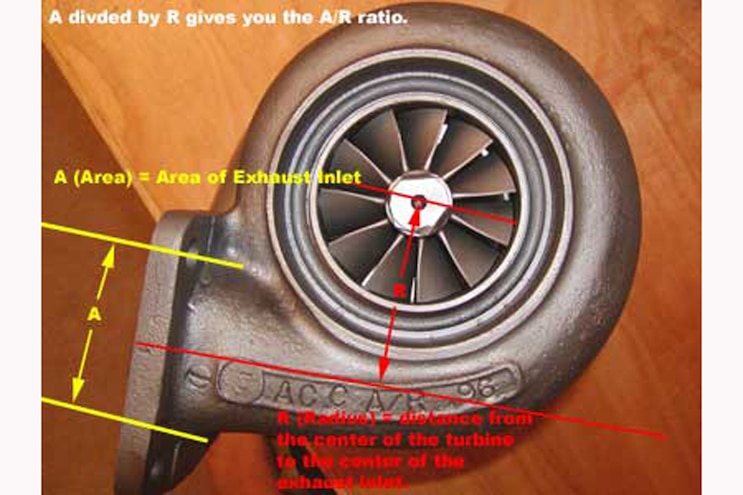 View Photo Gallery | 7 Photos
Photo 3/7   |   007 Top Turbo Questions And Terms
A turbocharger's A/R (aspect ratio) typically is the number that is cast into an exhaust-turbine housing that identifies the size of the housing, from the inlet to the radius from the center of the turbine wheel. Basically, the larger the number, the bigger the housing. Exhaust-gas velocity plays a major role in a turbo's spooling (turbine wheel speed). As the exhaust volume in the housing's volute decreases, gas is able to maintain velocity and a high energy level. However, if the A/R is too small, it becomes a choke point, increasing backpressure and preventing the turbo's ability to increase horsepower. A/R values are presented as .35, .47, .68, .84, 1.00, 1.15, and so on. While a turbine housing's A/R has a huge impact on a turbo's efficiency, the effect doesn't carry over to the compressor housing.

What Is Boost Creep? 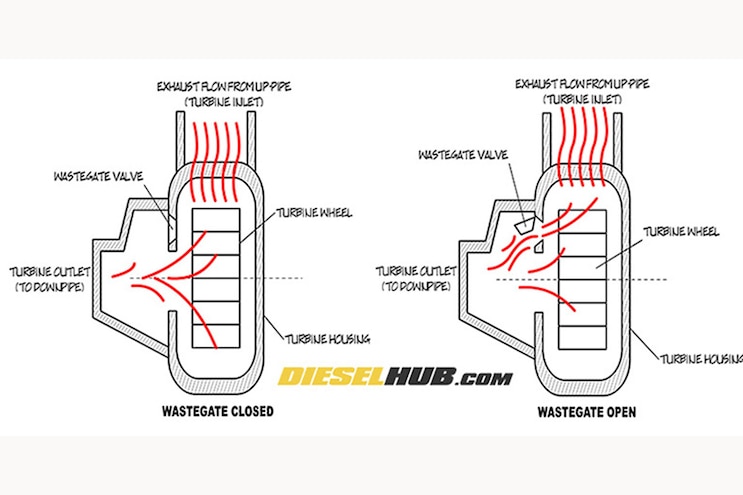 View Photo Gallery | 7 Photos
Photo 4/7   |   003 Top Turbo Questions And Terms
Boost pressure is predicated by turbo-shaft speed. A wastegate is used to bypass exhaust energy from the turbine wheel and slow the shaft speed, reduce intake airflow, and subsequently regulate/control boost pressure. As engine rpm increases, boost creep occurs when the output surpasses a predetermined threshold. The condition is basically caused by an open wastegate's inability to support the volume of exhaust that's bypassing the turbine wheel. A damaged or sticking wastegate can lead to a turbo producing more pressure than the engine can support for a long period ("overboost").

What Does Overspeeding Mean? 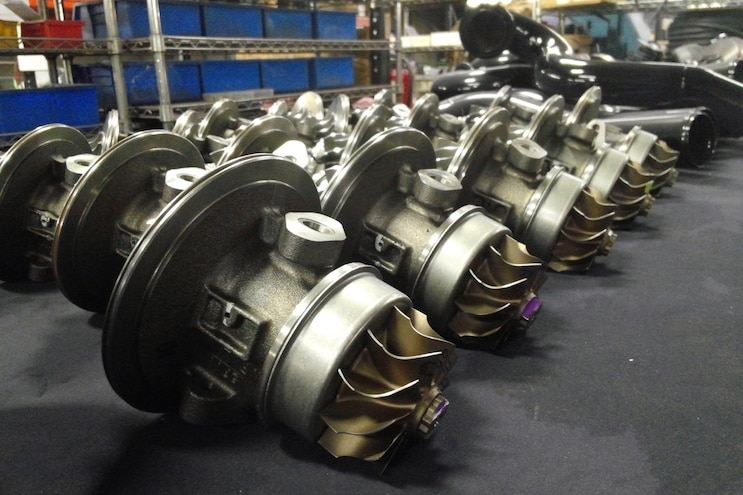 View Photo Gallery | 7 Photos
Photo 5/7   |   009 Top Turbo Questions And Terms
Overspeeding a turbo occurs when a turbocharger's rpm exceeds its manufacturer-specified limit, which results in damage to the turbine and/or compressor wheels, bearings, etc. Turbo overspeeding subsequently can lead to overboosting the engine, resulting in serious damage and possible catastrophic failure. Imbalanced intake airflow due to a restriction of some sort or a breach in the intake tube, or overfueling—as we discussed in reports on diesel engine blowby and runaway—all are conditions that promote engine overspeeding.

When You Hear Turbos Being Referred to by Four-Digit Numbers ("62/66," for example) What Does This Mean? 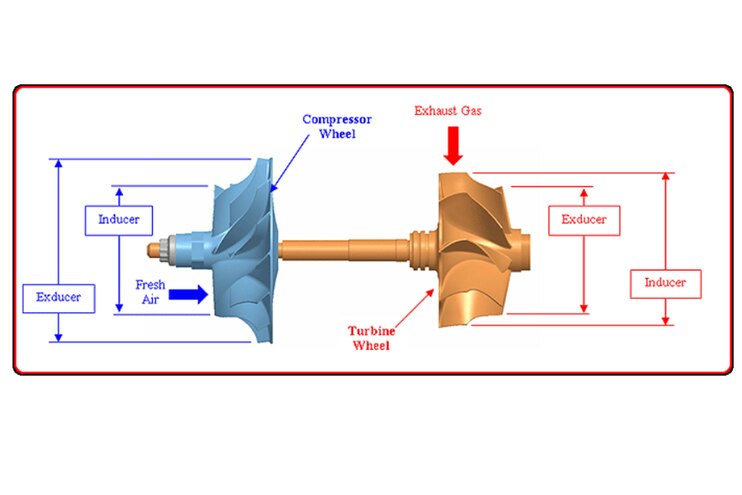 View Photo Gallery | 7 Photos
Photo 6/7   |   006 Top Turbo Questions And Terms
Using Precision Turbo's 'chargers as examples, the numbers represent the diameters of the inducer and exducer on the compressor and turbine wheels (measured in millimeters, from tip to tip of the blades on each wheel). With a 62/66, the first two digits are the compressor wheel size (62mm). The last two numbers refer to the size of the turbine wheel (66mm).

What Does "Shaft Play" Mean? 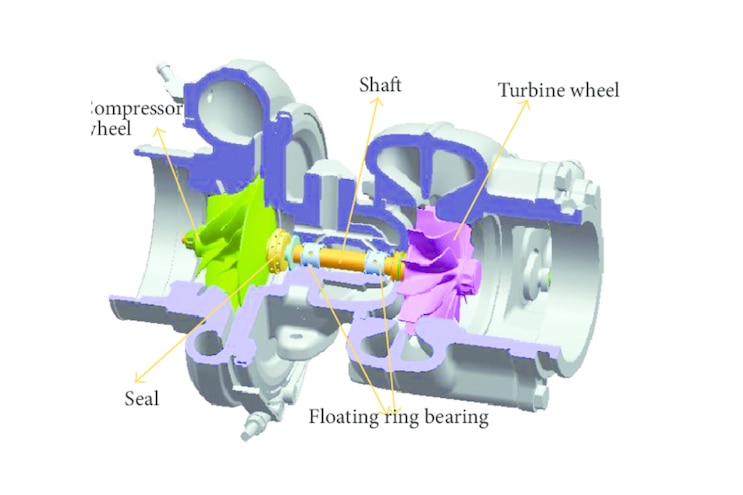 View Photo Gallery | 7 Photos
Photo 7/7   |   005 Top Turbo Questions And Terms
The turbo's shaft is exactly that: a shaft that links the compressor and turbine wheels. While popular belief stresses there should not be any play (unregulated movement) in the shaft, this belief actually isn't completely true. The fact of the matter is, some side-to-side movement is fine. However, a turbo should not have excessive shaft play. Meaning, the shaft should not feel sloppy or loose, and there should be no evidence of the compressor or turbine wheels touching down on their respective housings. Special measurement tools are needed to know if a turbo has too much shaft play.