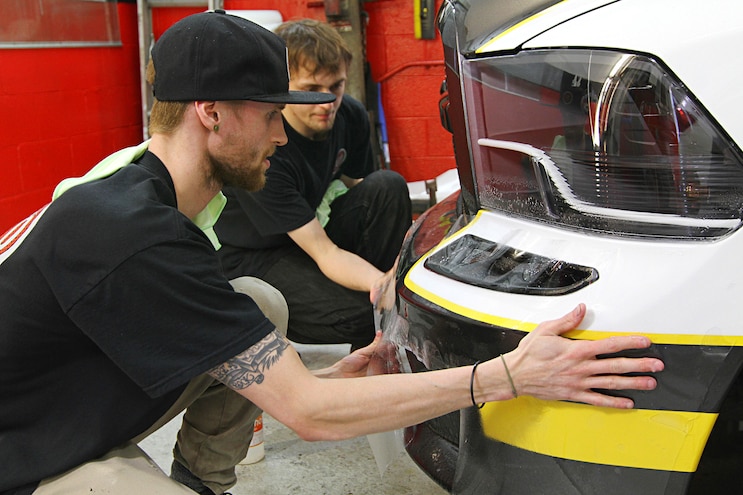 Stone chips. Bug bites. Road debris. After all the hours of painstaking detailing, the prospect of subjecting the shiny finish of one’s truck to the harshness of the highways is enough for some enthusiasts to keep their rides in the garage. And for those with a brand-new vehicle, the instinct to protect its paint is as old as carnauba wax.
Twenty years ago, front-end bras were all the rage for paint protection—even if they didn’t exactly look great, and sometimes caused more harm than good when improperly installed covers ending up scratching paint. But hey, it’s the 21st century, and new technologies like polyurethane-based films offer better options for keeping errant rocks and kamikaze dragonflies from leaving lasting impressions on your ride.
Texas-based XPEL Technologies is on the leading edge of paint protection film. The company’s range of products allows you to pretty much cover your entire vehicle in a virtually invisible coat of polyurethane armor. Its material has elastomeric properties that allow it to essentially “heal” itself when a stone bounces off of it. It also resists staining when a bird decides to use your truck for target practice.
Wanting to learn more, we borrowed designer Murray Pfaff’s Ram 1500 SEMA-stunner known as the Draggin’ Wagon. It’s a daily driven show truck, so he was more than thrilled at the prospect off adding a layer of protection to its custom paintwork. We took it to Motor City AutoSpa, in the Detroit suburb of Royal Oak, Michigan. The shop is an authorized installation facility, which was important, because apart from some door-edge and rocker-covering kits, XPEL doesn’t simply offer universal systems with 20-foot rolls of the film. The film is pre-cut to fit the contours of specific vehicles, and as we discovered by observing the process, the finesse of a professional was most definitely necessary to achieve a seamless, invisible-appearing result.
As for the cost of the installation, it varies significantly, along the lines of that old hot-rodding adage: Speed costs—how fast do you want to go? In the case of an XPEL film installation, it’s more like: Paint protection costs—how much do you want? With Pfaff’s truck, we went with a pretty standard front-end protection package that covered the entire ,front fascia, headlamps, grille and about 4 inches on the leading edge of the hood. Including the several hours of labor involved, the tab came to about $800. That’s not chump change, but as a hedge against the perhaps higher cost of paint repair down the road, it was a worthy investment.
You can ratchet up the protection from there, covering the entire hood or front fenders. Motor City AutoSpa owner Matt Lifter and manager Colin Rumschlag have even performed custom installations that essentially wrapped entire vehicles. Such jobs cost thousands of dollars, not hundreds, but it’s hard to argue with the results. Without pointing to the nearly invisible edge of the film on certain body panels, there’s no giveaway to spotting the crystal-clear protection wrap.
And that’s the ultimate goal, invisible, unobtrusive paint protection that lets the color and depth of the paint finish shine through. The age of going braless is finally upon us! 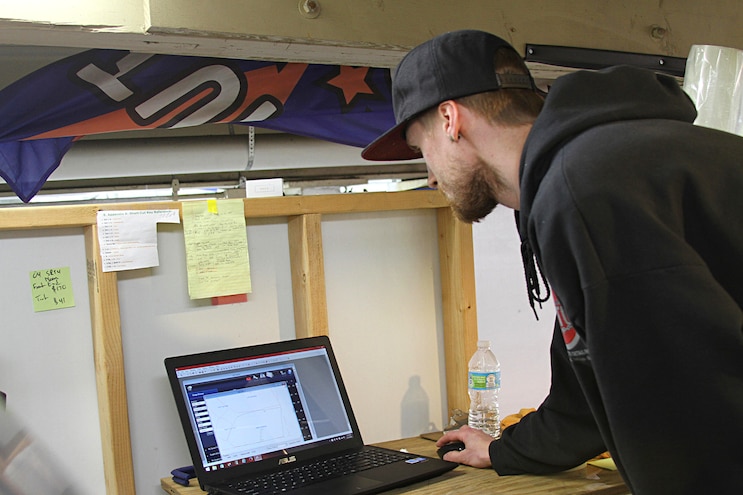 View Photo Gallery | 17 Photos
Photo 2/17   |   Rather than stocking rolls of vehicle-specific film kits, the installer pulls up the vehicle—a 2014 Ram 1500 in our case—on an XPEL database that shows the patterns and dimensions for the multiple pieces that compose the kit. View Photo Gallery | 17 Photos
Photo 3/17   |   After loading a sheet of the protective film, the patterns are plotted and cut on a custom tool. The method reduces waste and eliminates the need to stock multiple kits, particularly because the range of protection choices varies significantly. This method ensures each kit is cut to demand. 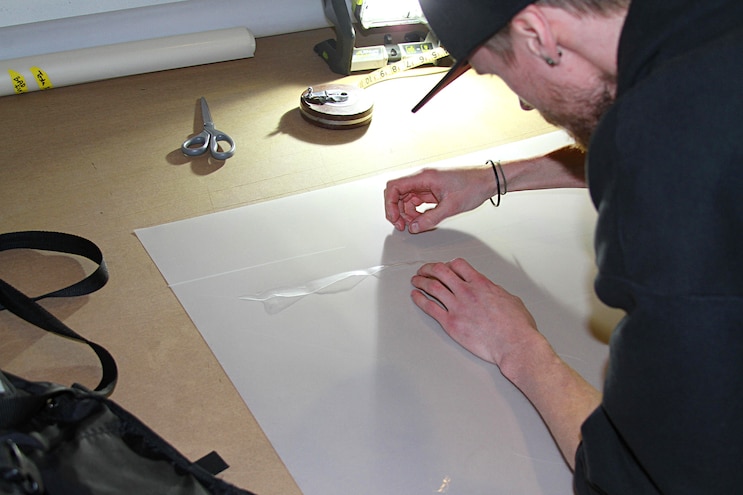 View Photo Gallery | 17 Photos
Photo 4/17   |   After the patterns are cut into the film, the individual elements of the kit are pulled back to prevent them from “healing” back into a single sheet again. We used XPEL Ultimate material for this project. It’s a clear urethane film, but there are also films for satin paint wraps and thicker, heavier-duty films for off-roading and commercial applications. View Photo Gallery | 17 Photos
Photo 5/17   |   While the film was being cut and prepared, the truck itself was also prepared. A clean, smooth and blemish-free surface is essential for the best result. In this case, the front of the Ram was even buffed after washing to ensure the smoothest surface. 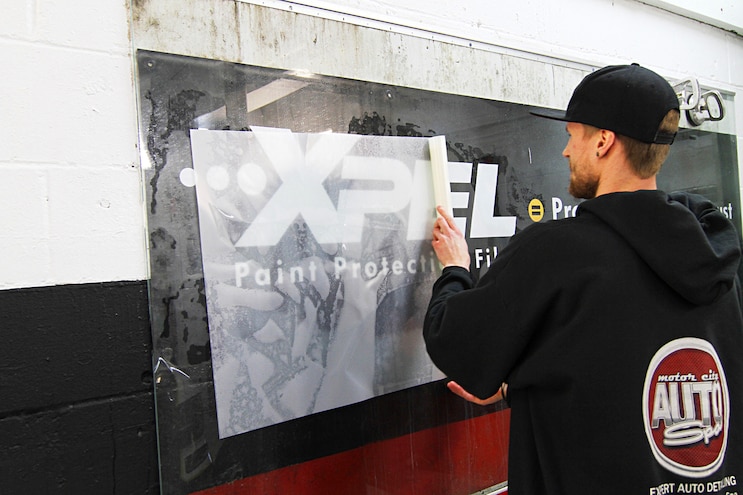 View Photo Gallery | 17 Photos
Photo 6/17   |   Next, the film was rolled onto a wet sheet of glass in preparation for the installers at Motor City AutoSpa to pull off each of approximately a dozen individual pieces of the kit for Ram project vehicle as needed. 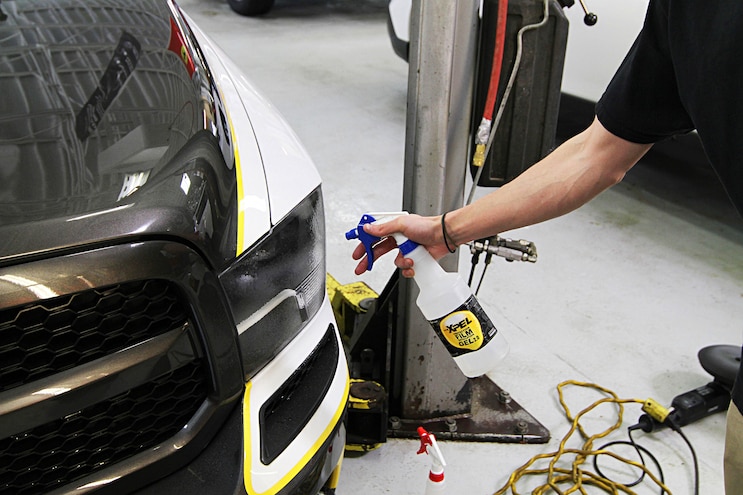 View Photo Gallery | 17 Photos
Photo 7/17   |   The installation begins with the headlamps lenses, which are sprayed with a lubricating application gel to make the film easier to position. 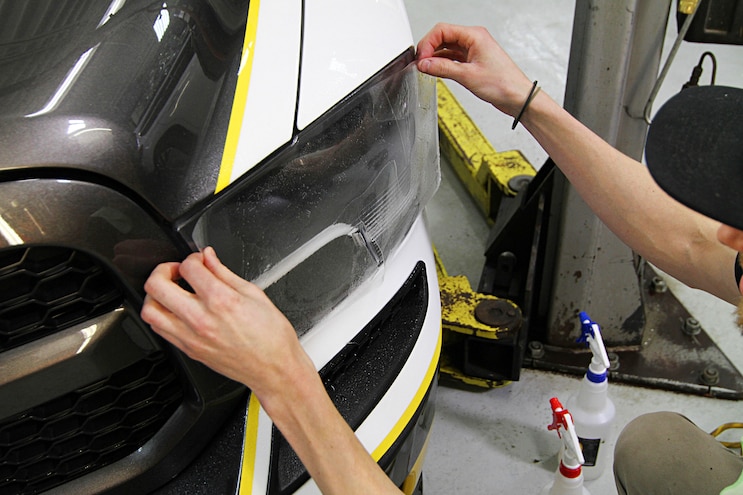 View Photo Gallery | 17 Photos
Photo 8/17   |   The perfectly trimmed film lays on the application gel much like installing an adhesive graphic. And while the gel allows the film to float momentarily, it adheres pretty quickly. An alcohol solution is also used to extend the mobility of the film. 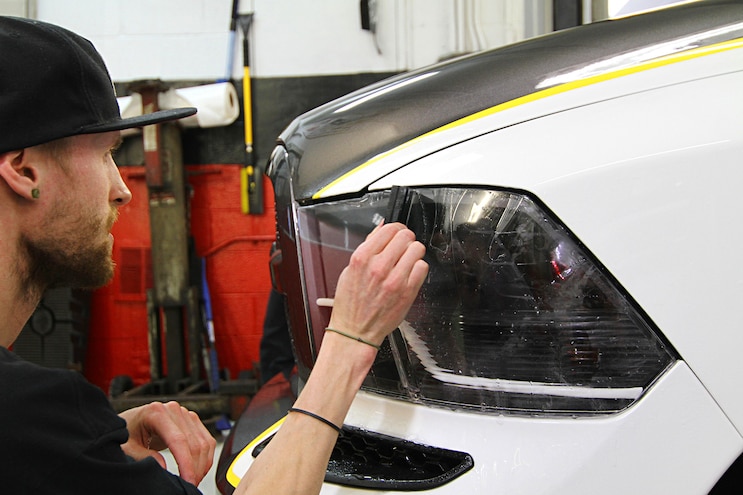 View Photo Gallery | 17 Photos
Photo 9/17   |   Finally, a squeegee is used to affix the film in its final position. It’s a little trickier than it appears, because there are virtually no totally flat surfaces on today’s vehicles, meaning it’s a slow, methodical process to avoid wrinkles on compound curves and corners. View Photo Gallery | 17 Photos
Photo 10/17   |   Next up is the piece that covers the front edge of the hood, extending back about 4 inches from the hood’s edge. XPEL offers total hood coverage, but the contours and vents on the custom aftermarket hood on Murray Pfaff’s Ram wasn’t in the pattern database, so the decision was made to go with the front-edge wrap. 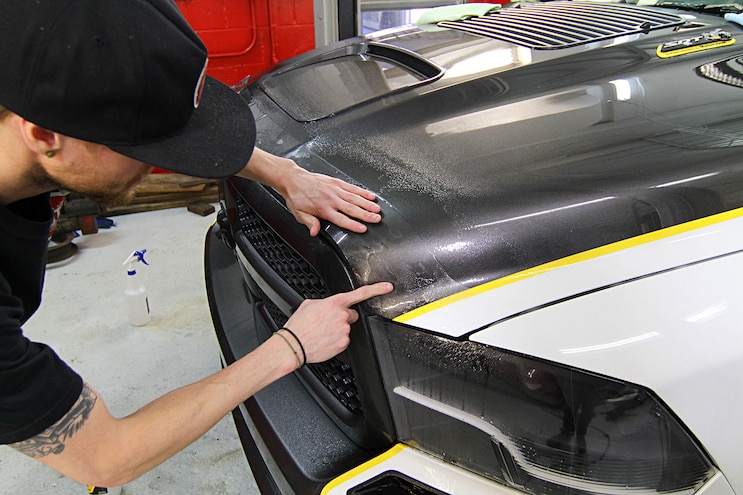 View Photo Gallery | 17 Photos
Photo 11/17   |   The three-dimensional contours of the hood require the film to stretch to conform to them. It takes finesse and experience to lay the film precisely, especially because it really looks at first as if there’s no way it will fit. 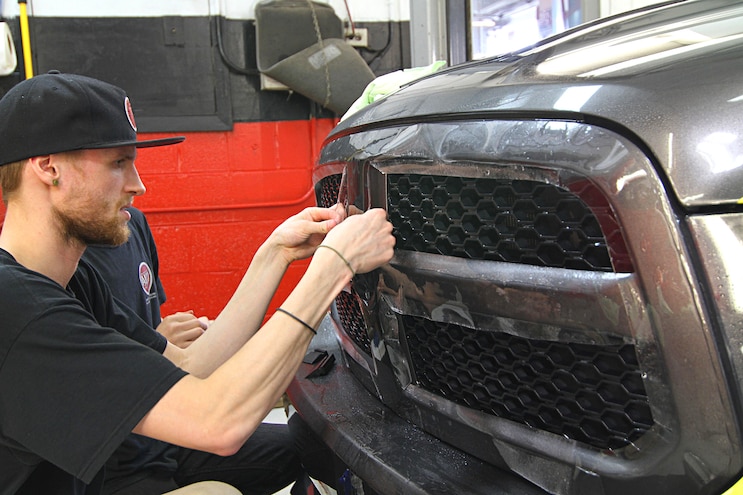 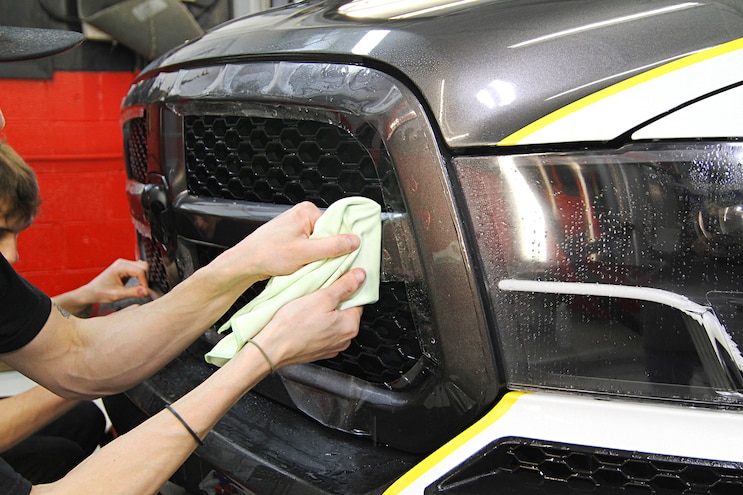 View Photo Gallery | 17 Photos
Photo 13/17   |   The multiple planes on the grille bars and grille surround took patience and time when fitting the film. A cloth was sometimes used over the squeegee to provide a softer, smoother touch when pressing the film into place. 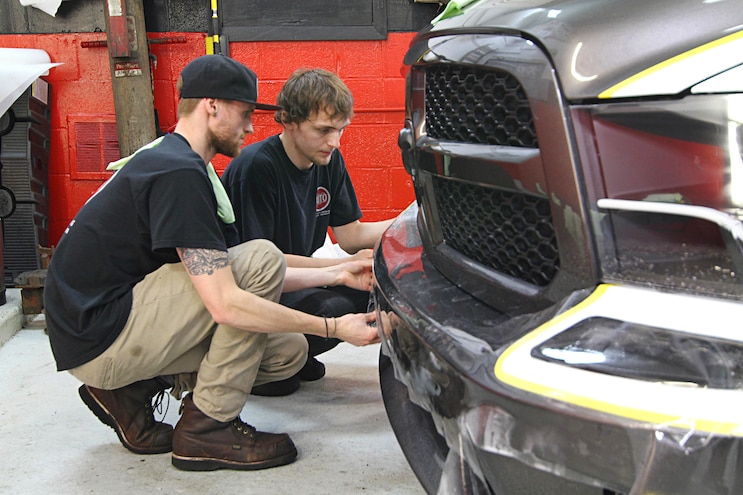 View Photo Gallery | 17 Photos
Photo 14/17   |   The largest piece of the installation was the wrap for the front bumper cover. In addition to its size, multiple contours made it difficult to line up before squeegeeing it into place. The film indeed stretches to fit the contours, but nothing like a heat gun is used to shrink it into place. It’s all about the finessing into place without wrinkles or bubbles. 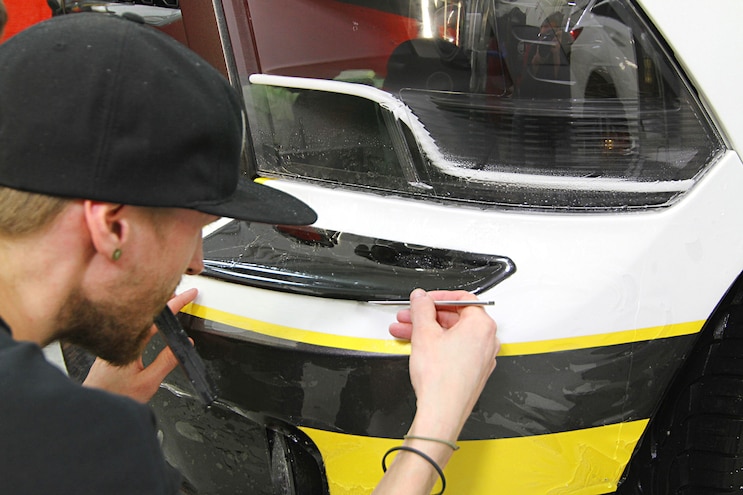 View Photo Gallery | 17 Photos
Photo 15/17   |   Some elements required trimming, such as around the custom air inlets on top of the bumper cover. A steady hand with a blade is all it took to modify the “stock” film pattern. 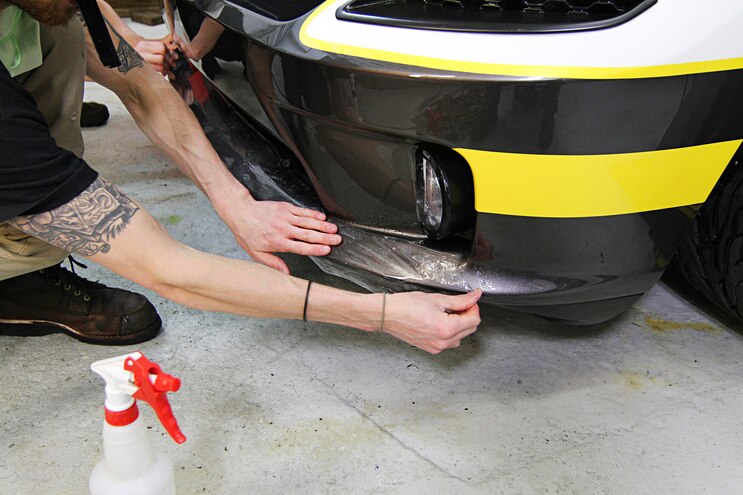 View Photo Gallery | 17 Photos
Photo 16/17   |   The final elements wrapped around the bottom of the bumper cover, but the sharp contours made them just as tricky to install as the other pieces. They were stretched and plied into place, completing an installation process that took about three and a half hours from the moment the patterns were cut out. 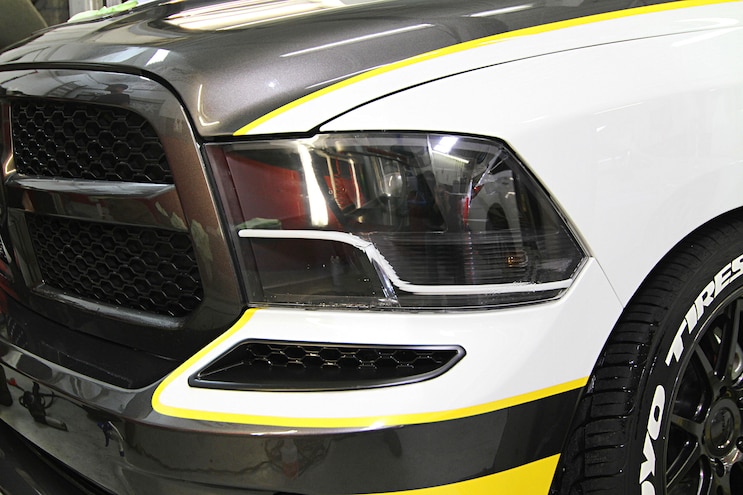 View Photo Gallery | 17 Photos
Photo 17/17   |   It’s basically impossible to tell the front of Murray Pfaff’s Draggin’ Wagon has been fitted with the XPEL film. It carries a 10-year warranty against cracking or yellowing and even provides some dent resistance. It’s almost too bad such an investment is virtually invisible.

- OF
By Barry Kluczyk
21 Articles

Truckin
Truckin
how to
How to Update Your Truck with a Frontend Conversion
Bringing new life to an old and tired-looking truck
Marcel Venable – Oct 14, 2020
Truckin
Truckin
how to
Replacing Rusty C-10 Floors and Rockers with New Components from LMC Truck
We go over the replacement and repair of rusty floors and rocker panels i...
Marcel Venable – Oct 6, 2020
Truck Trend
Truck Trend
features
How to Protect Your Wrangler JL Rockers With Rock Sliders
Rock sliders are as much about function for your Jeep as they are style, ...
Sean P. Holman – Oct 5, 2020
Truckin
Truckin
how to
Rebuilding Our Freshly Painted Silverado with custom bumpers, steps, lighting and LEDs
Rebuilding Our Freshly Painted Silverado With Move, Anzo, LMC, N-Fab, ATC...
Jeremy Cook – Sep 9, 2020
Join Our FREE Truck Trend Network Newsletter