It’s a given that just about any time you head out on a job, your work truck is going to get dirty—and the paint will likely become pitted or contaminated, as well. There’s just no getting around that reality of the working guy’s world. But since you’re a pro and potential customers judge your company by the quality of your equipment, you want to keep your rig looking clean and undamaged.
This leads us to XPEL’s paint protection film. It’s designed to keep your paint looking as good as new, year after year, no matter how much grit and grime you encounter. It’s nearly invisible and can be applied not only to the hood and front valence but also to the headlights, side mirrors, and doors—actually, your entire pickup, if so desired. The big news is that this film is available in precut patterns for 70,000 different production vehicles and can be hand-cut and applied to unusual van or truck-body styles not often seen (if that’s the kind of rig your company operates). Note that not all brands of films are created equal. XPEL Founder Tim Hartt was originally a distributor and pattern maker for another well-known film manufacturer. Deciding to improve on the product’s clarity, longevity, and some other features, he introduced his own line in 2006.
Today, XPEL’s most popular clear film product is the Ultimate, consisting of a polyurethane film with an acrylic polymer adhesive on the underside, plus a clearcoat on top made of elastomeric polymers. Referring to this new, elastic topside coating, Hartt says, “That’s where the magic happens.” How so? XPEL’s Ultimate actually has the ability to “self-heal” micro scratches, he points out, since elastomeric polymer tends to flow somewhat, filling in lower spots, especially in the presence of heat. The main advantage, though, is that XPEL film is designed to prevent chipping from pebbles and other debris along with contamination from road oils that can collect in the pores of the paint and cause yellowing.
Hartt notes that certain areas of the country need extra protection, such as the Southeast, where, during mating season, love bugs can cake up on paint and eat into the paint finish (giving a whole new meaning to that old song lyric, “Love is in the air”). Also, road salt obviously poses a problem in cold climates, as do airborne pollutants in urban areas. With XPEL’s film, these contaminants wash off easily with standard car soap, and the surface can be waxed or polished for extra protection and a show-quality shine. Whatever your location or climate, having an extra layer of protection makes good sense, not only to avoid the cost of a repaint, but to keep your work truck finish looking “profreshional.” 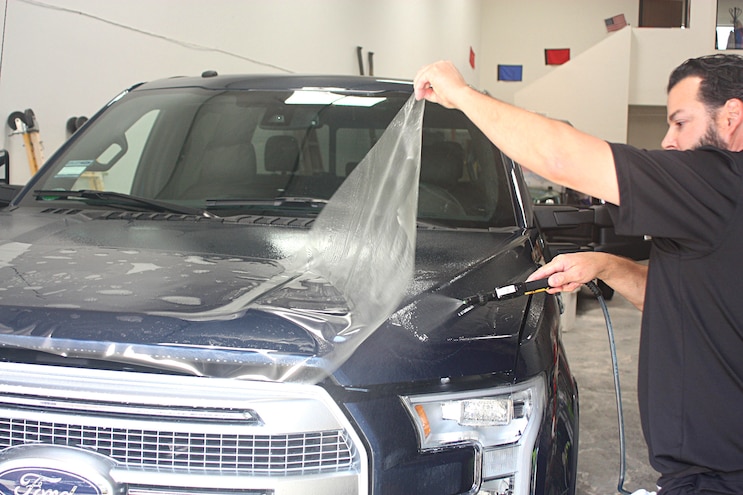 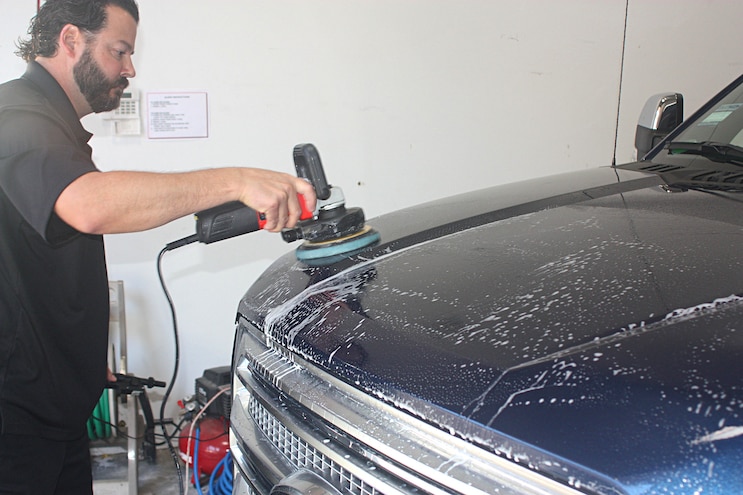 View Photo Gallery | 17 Photos
Photo 3/17   |   Before applying the XPEL film, do a thorough cleaning, preferably with a soft buffing pad and lots of soap and water. 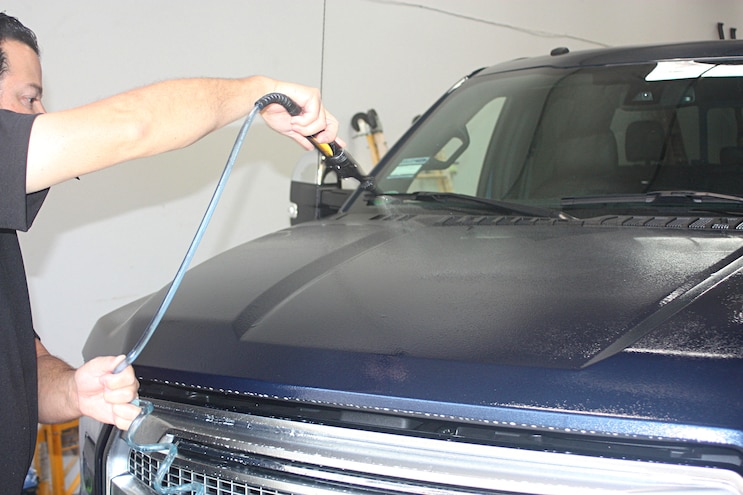 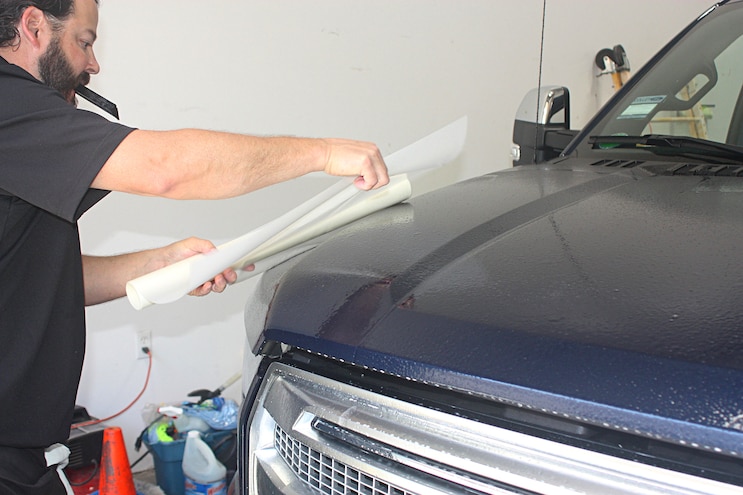 View Photo Gallery | 17 Photos
Photo 5/17   |   XPEL film is usually installed by a professional trim shop (especially for a custom, hand-cut application), as it requires a fair level of expertise and fitting time. First, the cleaned surface of the vehicle is wet down with XPEL’s special film gel solution. The XPEL film typically comes in pre-cut patterns mounted on white backing paper. The film peels off the backing paper as it’s attached to the body. The rest of the backing separates off as it’s unrolled. 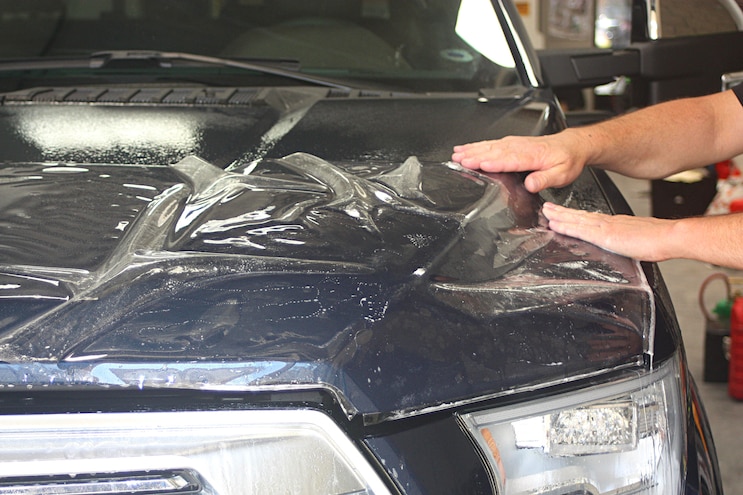 View Photo Gallery | 17 Photos
Photo 6/17   |   The gel polymer, previously sprayed on the body to keep things moist, allows the film to be adjusted to the exact position. 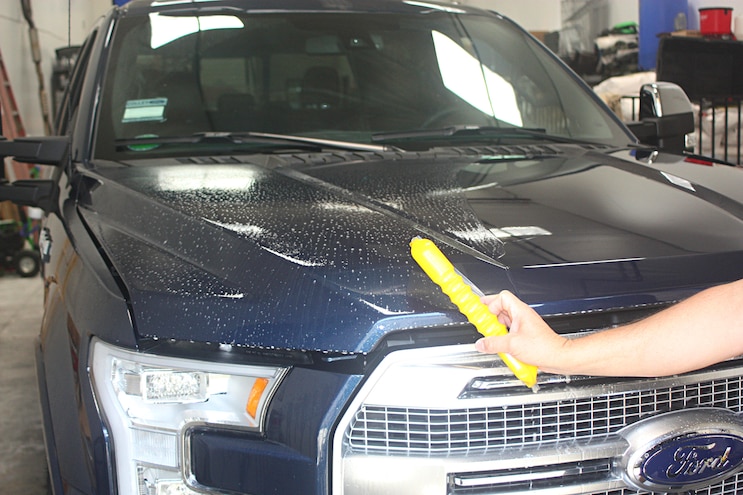 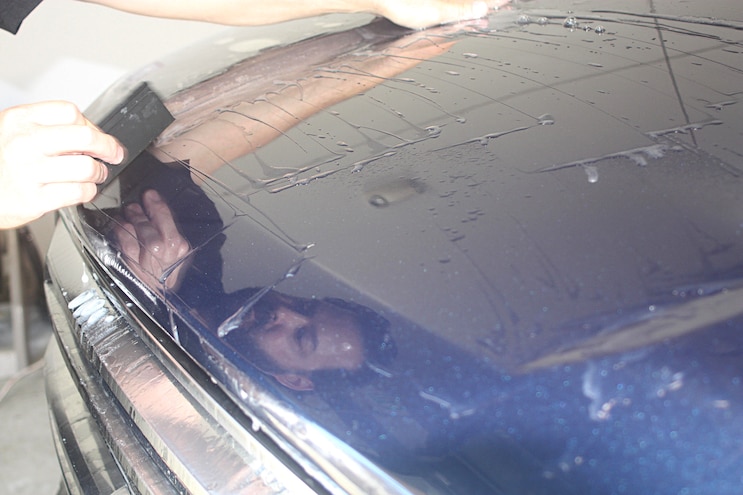 View Photo Gallery | 17 Photos
Photo 8/17   |   Any excess solution and air bubbles are squeegeed off the body. Experienced hands are needed to get it right. 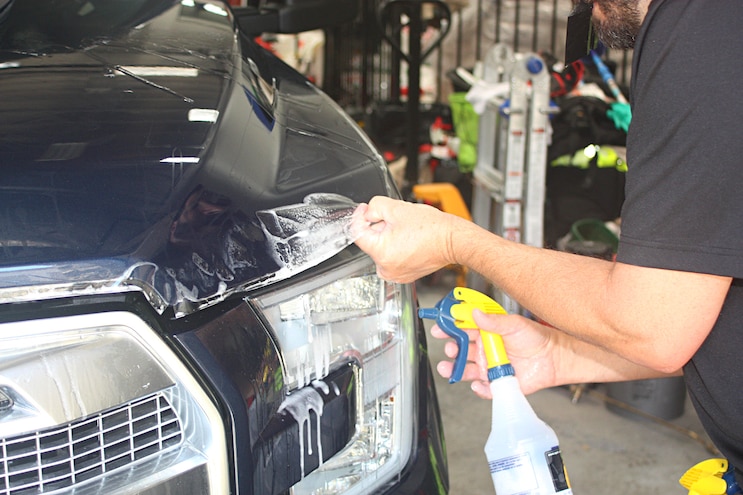 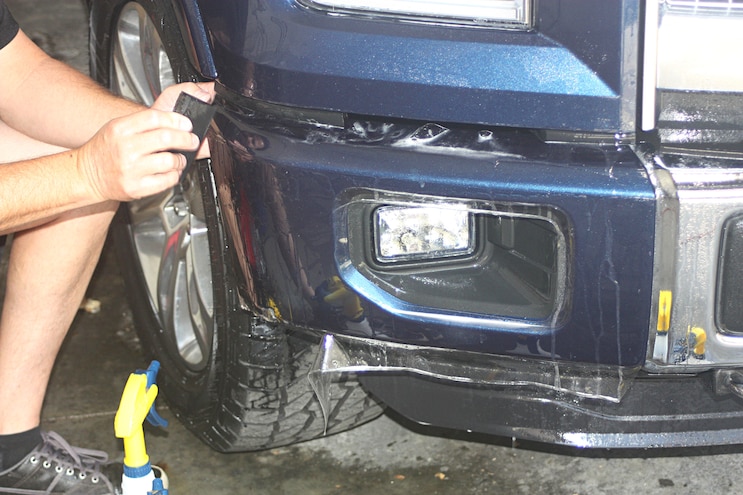 View Photo Gallery | 17 Photos
Photo 10/17   |   Some areas are more intricate than others, with multiple and reverse contours and cutouts for lights and/or emblems, which take a deft touch and might require using a heat gun to stretch and mold the film. 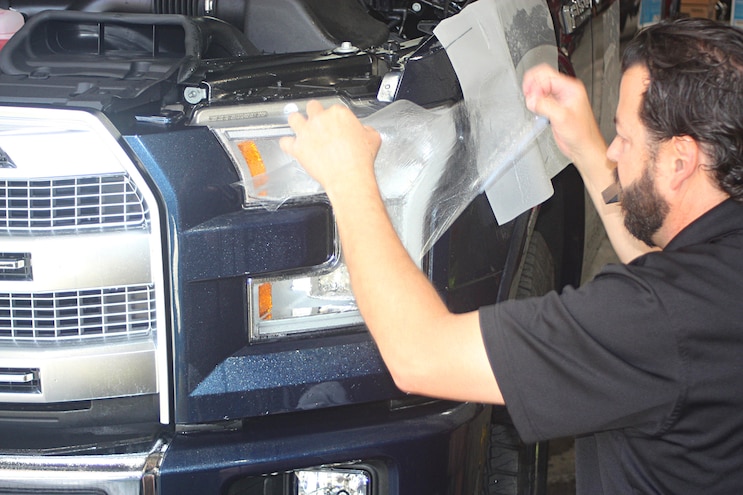 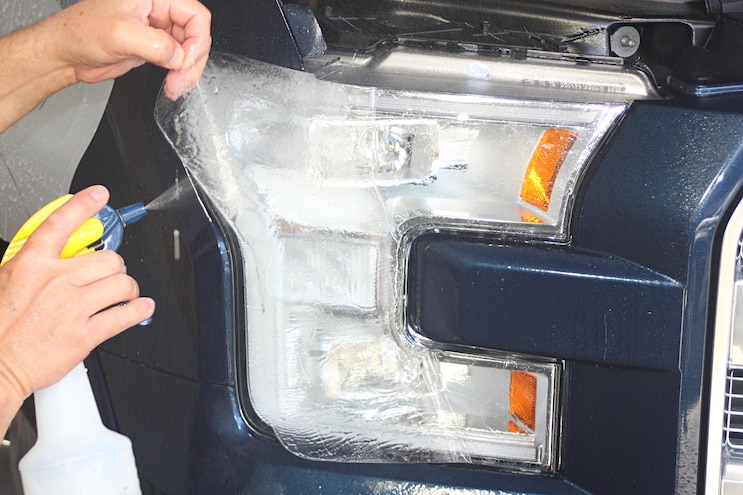 View Photo Gallery | 17 Photos
Photo 12/17   |   One clear advantage of XPEL film is that it can be applied to headlights. Pre-cut patterns make for much easier fitment, and the film protects lights from pitting and splatters. 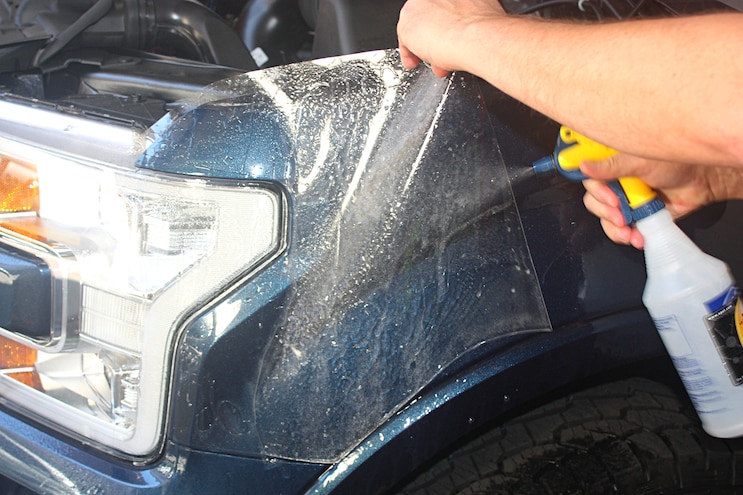 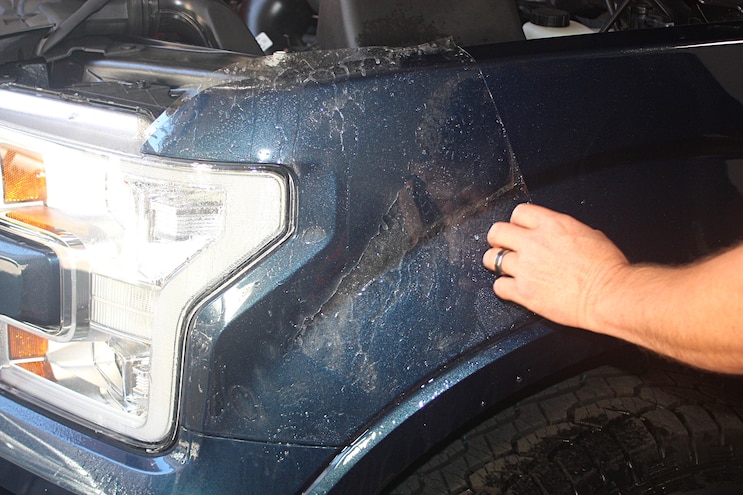 View Photo Gallery | 17 Photos
Photo 14/17   |   Any area of the body that protrudes into the airstream can be protected with XPEL film to provide invisible protection. Fender edges, side mirrors, door handles, and other high-wear areas can all benefit from coverage. After frequent contact and wear, the film can be replaced easily if need be, as any residue of adhesive simply rubs off by hand. 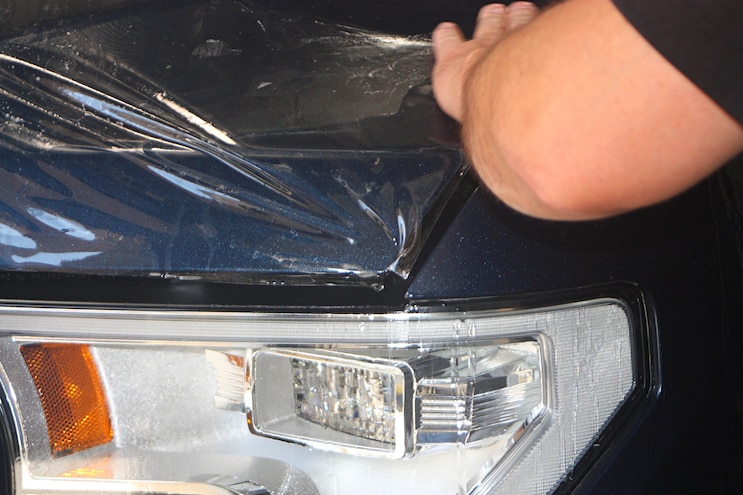 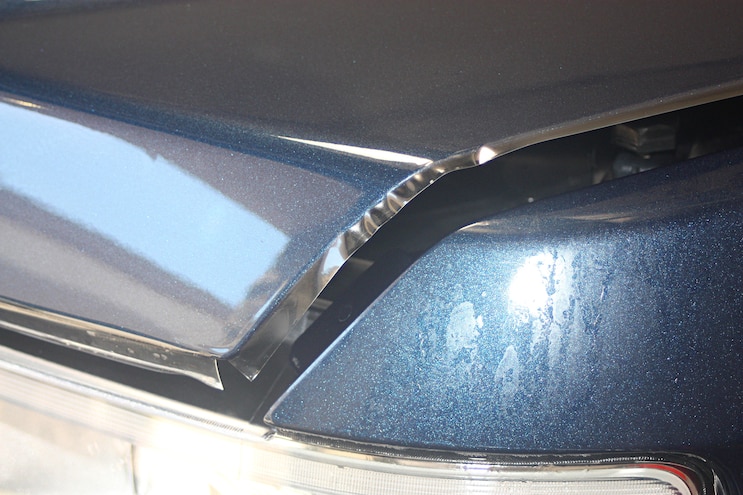 View Photo Gallery | 17 Photos
Photo 16/17   |   Once the film is fitted properly, any overlap is trimmed off carefully and then wrapped over the edges to match the contours of the body. 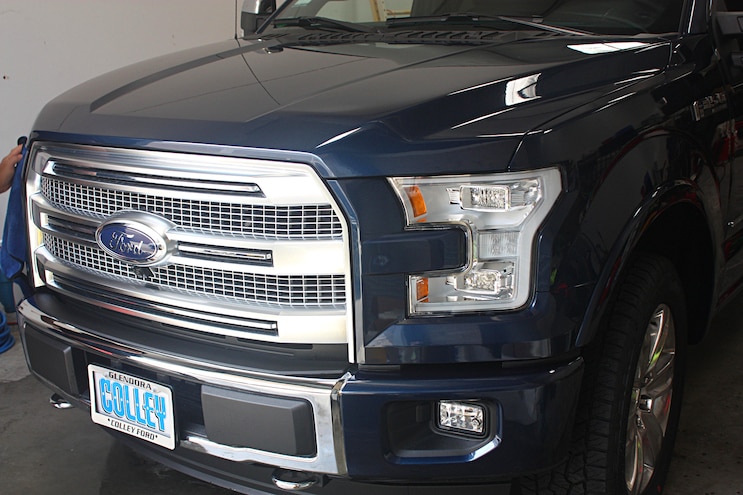 View Photo Gallery | 17 Photos
Photo 17/17   |   Once installed and dry, the XPEL film is barely visible. Prices range depending on the extent of coverage, starting as low as $500 for small sections. The cost of covering larger areas, including the entire vehicle, runs anywhere from $2,500 to $4,000 (but that’s still far less than a new paintjob, which would be more vulnerable to damage).