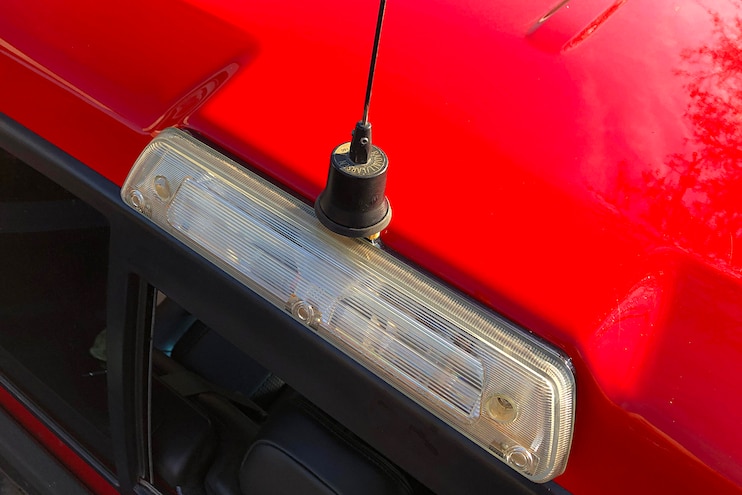 In our increasingly connected world staying in contact is crucial. When venturing out into the wild the need for a reliable communication device becomes exponentially greater. Citizen Band, or CB for short, radios have been the gold standard in off-road communication for decades. While these radios are inexpensive they also have severe range limitations. Thankfully the rise of amateur radio use has increased the ability for off-roaders to communicate from just a few yards with CBs to potentially hundreds of miles.
There are still a few drawbacks to amateur radio. The largest disadvantage being the need to carry a special license to operate, or alternately purchase a pre-programed “race radio” from one of the many suppliers. Then there’s the cost of entry, while a CB can be had for a Jefferson, a decent amateur radio will start around $300 and climb from there. Still, when needed those extra miles of range could mean the difference between life and death, so the cost is truly justified.
Picking the right radio and where to mount it is the first half of a two-part equation. The second is where and how to mount the antenna. Amateur radio antennas ideally need to be mounted high and near a large ground plane (like the roof of a truck). Undoubtedly if you’re reading this you too get squeamish at the thought of drilling a large hold in the roof of your expensive pickup. Thankfully the team at BulletProof Diesel and Neal Technologies share the same aversion and developed an elegant solution to this problem.

View Photo Gallery | 17 Photos
Photo 2/17   |   For decades the best solutions for mounting a CB or HAM radio antenna to a pickup was drilling a massive hole in the roof or using an inferior magnetic mount. Sure, a few different styles of universal mounts exist, however none could be described as particularly classy. Enter BulletProof Diesel and Neal Technologies and their machined aluminum, vehicle specific, third brake light antenna mount.
By designing a mount that sandwiches between a pickup’s cab and center high-mount stop light they have retained the height advantage and nearness to a large ground plane while avoiding the need to drill a large hold in the cab. The company’s antenna mounts are machined from aluminum, powder coated black, and come with a high-quality gasket to keep the elements where they belong. There are models available for both first and second-generation Ford Raptors, all years of Ford F-Series Super Duty, 2015 to current F-150, 2009 to 2018 Ram 1500, 2010 to 2019 Ram HD, and 2014 to 2018 Silverado and Sierra.
Follow along as we install one of these beautiful antenna mounts on our 2013 Ford F-150 SVT Raptor. 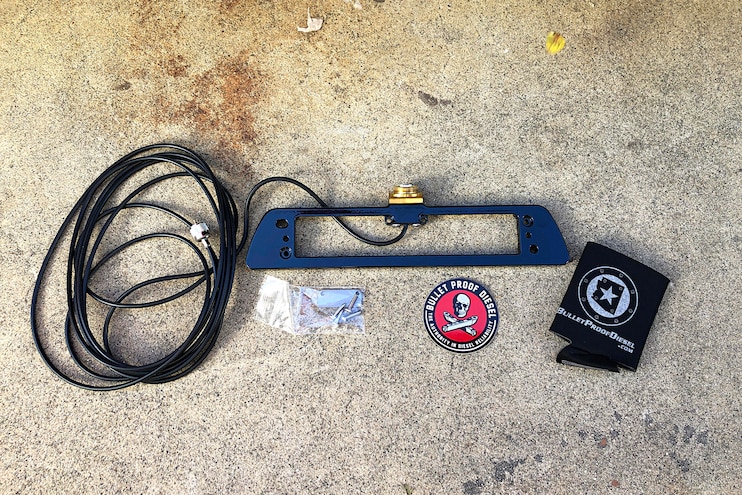 View Photo Gallery | 17 Photos
Photo 3/17   |   Included in the package is everything you’ll need to get the job done. The mount comes powdercoated black and with a gasket to keep the elements out. All hardware and screws are included, along with a sweet sticker and can coozie. 15 feet of coax cable is included, and longer lengths can be custom ordered. 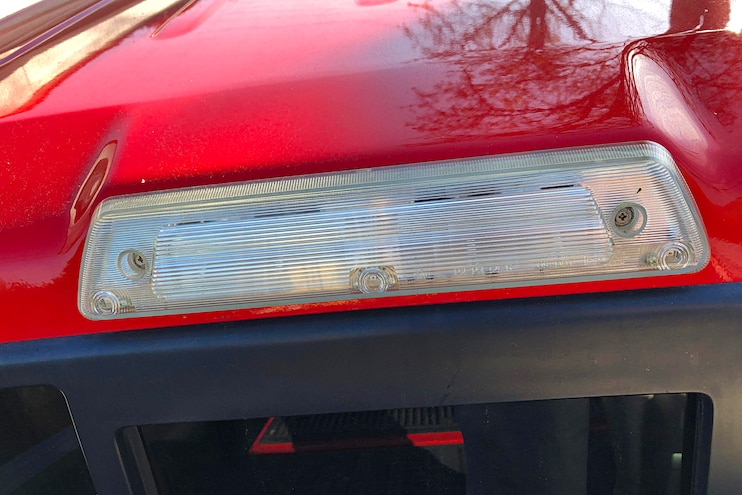 View Photo Gallery | 17 Photos
Photo 4/17   |   Our test subject is a 2013 Ford F-150 SVT Raptor, and unlike most Raptors this one is destined for a hard life of bombing through the desert. BulletProof’s antenna mount is intended for use with the factory brake light, and retains all factory functions. 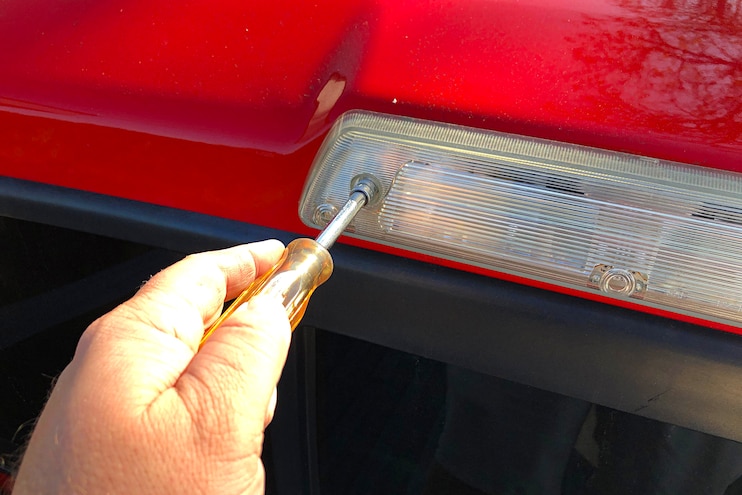 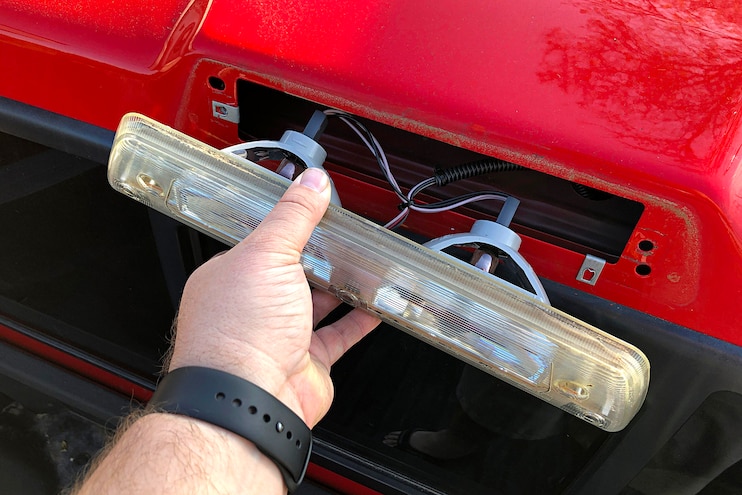 View Photo Gallery | 17 Photos
Photo 6/17   |   With the screws removed, gently pull the brake light away from the cab. It might take a bit of wiggle if the gasket has fused to the cab, just be careful not to damage it. 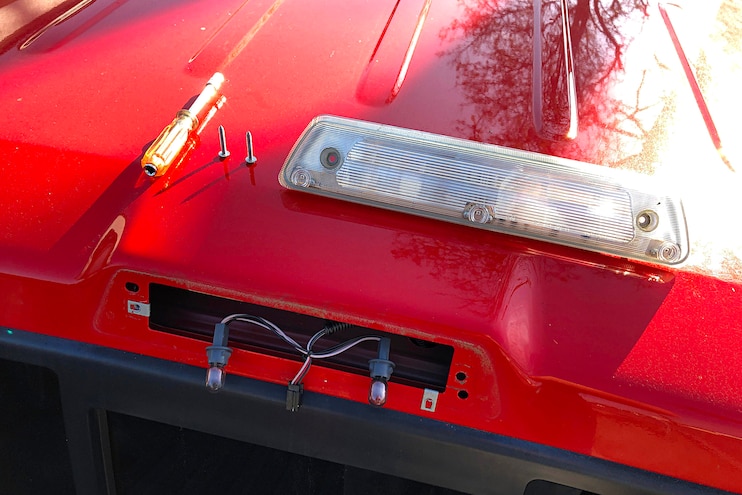 View Photo Gallery | 17 Photos
Photo 7/17   |   Next, remove the two cargo lamp bulbs and unplug the connector for the brake light LEDs. Different models will have different bulb arrangements, so be sure to consult a manual if you’re unfamiliar with the removal procedure. If the lights have been on be careful when removing the bulbs, as they can be quite warm. 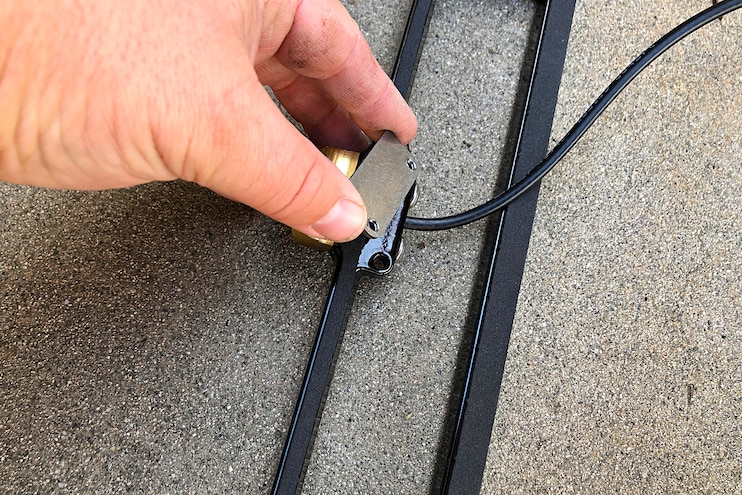 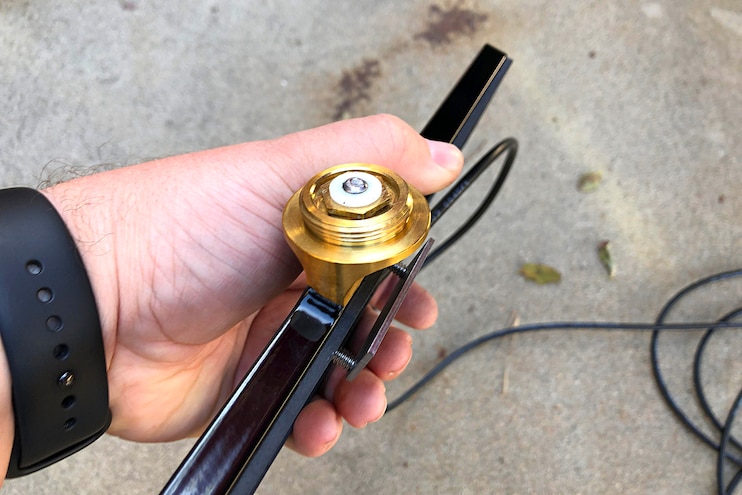 View Photo Gallery | 17 Photos
Photo 9/17   |   Before installing the mount, loosely attach the support bracket to the rear of the mount. Leaving it plenty loose will make installation on the truck easier. 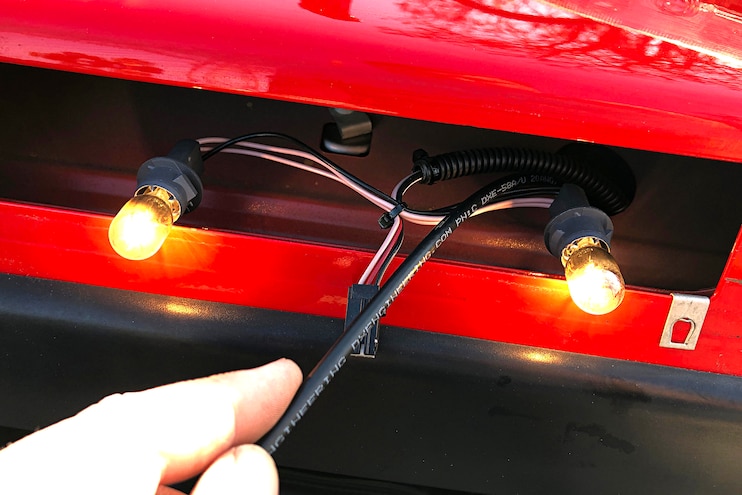 View Photo Gallery | 17 Photos
Photo 10/17   |   The last step before installing the mount is to feed the coax cable into the cab of the truck. We passed the cable into the cab by following the same route as the brake light wiring. The cable was tucked up behind the headliner and routed up to the front of the cab. 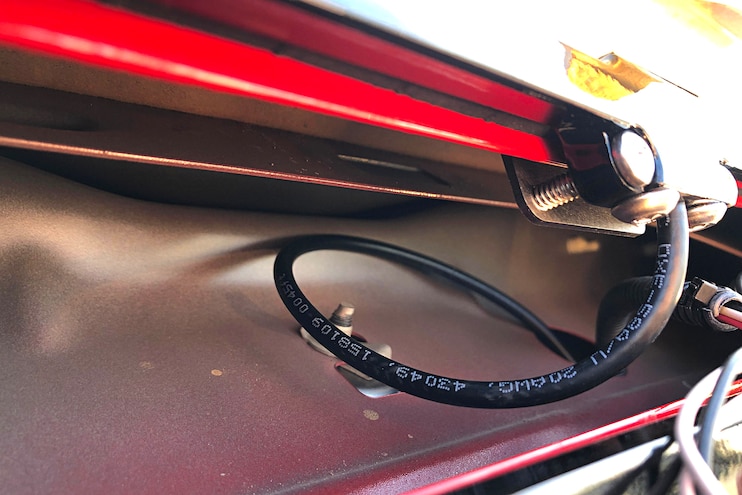 View Photo Gallery | 17 Photos
Photo 11/17   |   After routing the cable, slide the antenna mount into place. Ensure that the support bracket is behind the cab sheet metal. 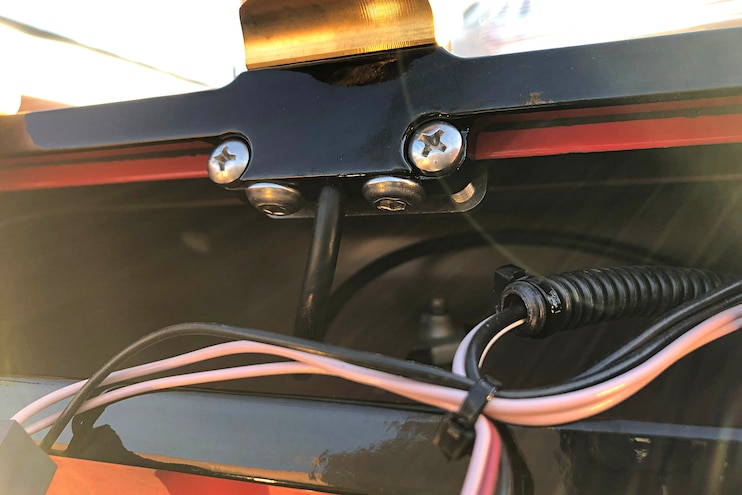 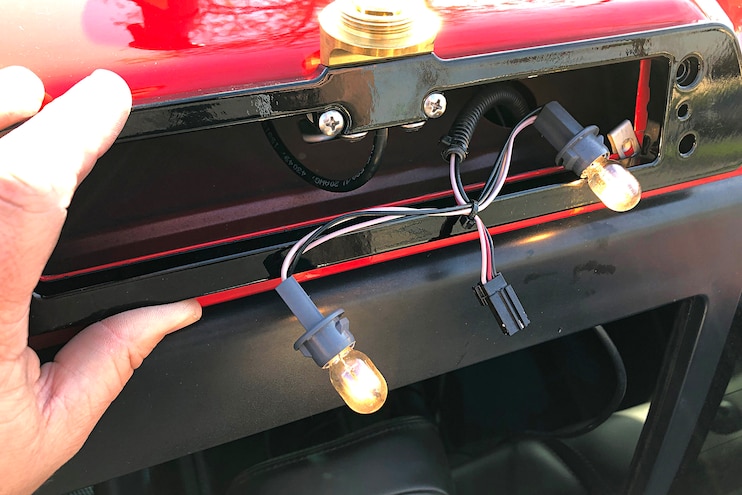 View Photo Gallery | 17 Photos
Photo 13/17   |   Next, line the mount up with the factory brake light mounting holes in the cab. Route the cargo lamp bulbs and brake light plug through the center of the antenna mount. 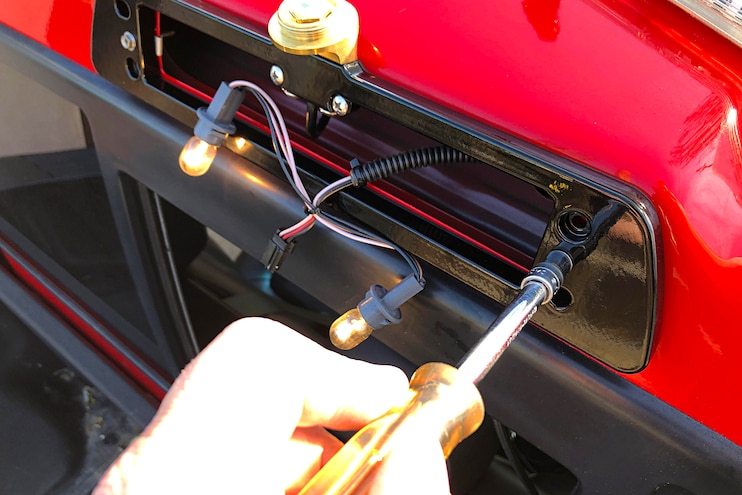 View Photo Gallery | 17 Photos
Photo 14/17   |   With the mount lined up temporarily attach it with the factory mounting screws. Once in place the support bracket screws can be tightened. 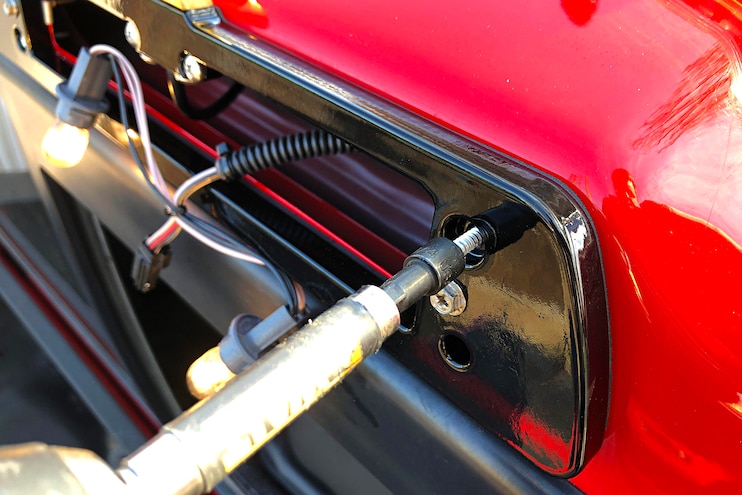 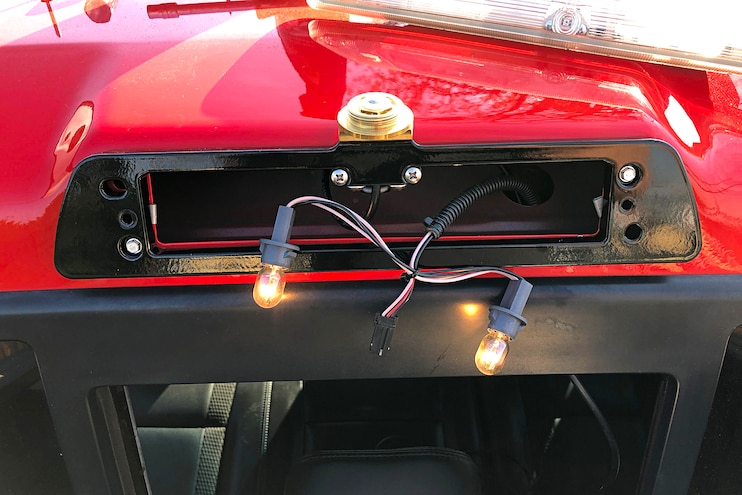 View Photo Gallery | 17 Photos
Photo 16/17   |   Once installed the BulletProof antenna mount provides a clean and classy solution for what used to be nothing more than a utilitarian operation. View Photo Gallery | 17 Photos
Photo 17/17   |   From start to finish, not including routing the coax cable, the entire installation took around 15 minutes. We’re certain that this mount will easily outlast the truck and is more than worth the price of admission.