How To: Removing Pinstripe and Light Rust

Pre-wrap prep efforts for our 1995 Ford F-350 appearance makeover continue with DIY projects on the body and hood. 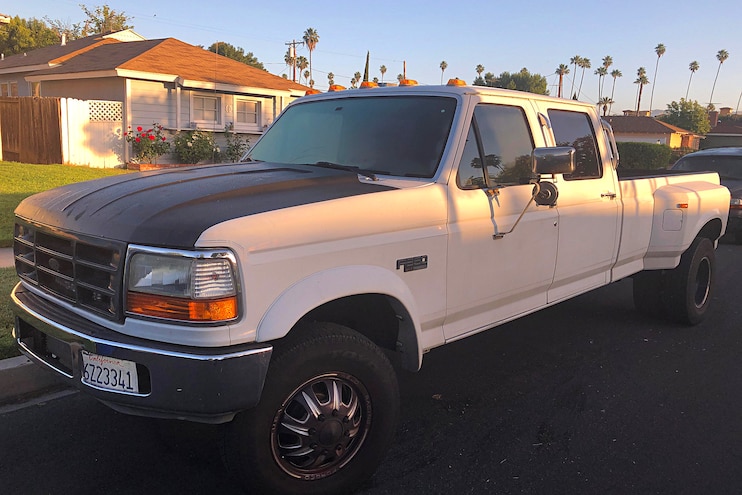 More on This 1995 Ford F-350.
How to Prep a Truck Bed for LINE-X Coating
What Is LINE-X?
Bringing newcomers to this series quickly up to speed, we're currently in the process of bringing "new life," appearance-wise, to a 1995 Ford F-350 crew-cab dualie (nicknamed "Big White") that has been in Diesel Power's fleet for several years.
With approximately 170,000 miles, the truck's original Ultra White paint is in good shape, but faded nonetheless, as are blue-and-gold pinstripes from front to rear; they're accents that we're sure set Big White apart from similar rigs during its mid-'90s heyday.
We're giving the old girl's body panels a refresh, by way of a Raceskinz-conceptualized wrap featuring Avery Dennison Graphics Solutions' Metallic Blue, Gun Metal Grey and Black vinyl. As noted in our previous report about LINE-X bed coating, "prep work" is essential for any type of automotive refinishing. It makes no difference whether a truck is being repainted or wrapped, the surfaces that are receiving color need to be clean and as smooth as possible. With this being the case, two areas on Big White must be addressed before we can proceed. The pinstripes and a few small rust areas on the LMC Trucks cowl hood must go!
Diesel Power Editor KJ Jones spent a full day eliminating the offending enamel and oxidized steel, and he documented the how to remove pinstripe and rust process, with photos and a series of quick DIY videos that highlight key procedures. Check it out!

How to Remove Pinstripe

From the moment Mike Smith of Raceskinz said, "The pinstripes have to go," how to remove them—as easily as possible—became a minor obsession. The thought of having to get rid of enamel paint (that at this point is well baked on) was daunting, to say the least.
After turning to Google and YouTube, using Acetone, water, and several rags proved to be the unanimous recommended method, as opposed to fine-grit sandpaper. Plenty of arm strength (both arms) is required, but the Internet experts fail to share that detail.
The process isn't tedious, it's just time-consuming, especially when you're working with a big subject like a crew-cab dualie. Two cans of Acetone and pretty much a full day of your time are the primary resources for knocking out this project, and, honestly, the all-white result (after finishing the effort by giving the truck a good bath) had us second-guessing our choice to change the color.

Big White sports an all-steel cowl hood from LMC Truck. Five very small rust spots developed in the bonnet, and like the pinstripes, they also need to be cleared and the metal sealed. Credit Jonathan Light of In Focus Performance Marketing for putting us onto KBS Coatings of Valparaiso, Indiana, a company that specializes in the subject of rust repair ("Rust Stops Here" is the company's motto).
Using KBS "System Sampler Kit;" a totally DIY package that features a cleaning agent called KBS Klean, Rust Blaster primer and Rust Sealer, and following its detailed instructions, KJ had the hood stripped of rust, prepped and sealed in about an hour. Of course, the amount of time to complete the process really depends on the area(s) requiring attention, but the bottom line is, this effort is three-steps easy, and the finished product is a good, smooth, durable seal on the areas of concern in Big White's hood.