Not if you have Banks NAV for the Banks iQ 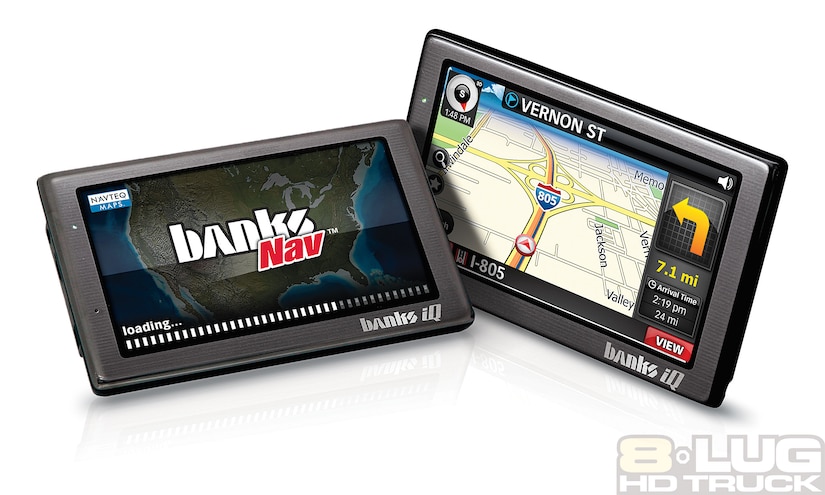 Banks Power has released the Banks NAV to be used in conjunction with the Banks iQ. When we reviewed the Banks iQ Dashboard PC after its initial production, we were impressed with the capabilities built into it—and now the engineers at Banks Power have revised the hardware to make it even more powerful. To recap, the Banks iQ is a 5-inch touch screen display dashboard PC with a micro SD card slot and a GPS receiver. The latest model has a faster dual-core microprocessor, more internal memory, and to appease the audiophiles amongst its owners, it now has a convenient external audio output jack. The more powerful CPU and additional memory boost processing speed and reduce time when switching between the various Banks “environments.” The extra horsepower also enhances the video post processing, which makes the graphics smoother and more appealing to the eye.
View Photo Gallery | 4 Photos
Photo 2/4   |   banks Nav For The Banks Iq Lost banks Iq
Banks NAV leverages the horsepower from the Banks iQ dual-core CPU and street smarts from the 24-channel GPS receiver to create a capable turn-by-turn navigation system. The GPS map software is installed on a micro SD card that plugs into the Banks iQ. Voila, instant GPS—no other hardware is required. Don’t let the size of the Banks NAV micro SD card fool you, the software is feature-packed and capable of providing turn-by-turn voice-prompted driving aids to more than 7 million points of interest (POI), including phone numbers, throughout the United States and Canada. Don’t let this daunting number intimidate you. POIs can be searched by category, name, proximity to the vehicle’s current location, or by destination location. Data entry for route destination uses anticipation algorithms to predict locations and employs progressive letter elimination to speed the selection process. In other words, the software will remove letters from the alphabet that are not valid for entry. Destination routes may be entered by address, crossroad, or a saved favorite destination. Routes are then calculated and displayed on the main map view page.
View Photo Gallery | 4 Photos
Photo 3/4   |   Powered by the Banks iQ Dashboard PC, the Banks navigation software is a feature-packed addition to the already powerful iQ environment. The software functions similarly to other standalone GPS units providing turn-by-turn directions, route detours, and directions to a broad selection of points of interest. What sets this unit apart from the competition is the integration of the iQ Dashboard PC.
The navigation software will work with Banks tuners and the SpeedBrake. However, you are unable to change the tuner or brake setting while the GPS is in operation. The tuner and brake will operate at the last setting prior to engaging the NAV software. Fuel economy monitoring is also active, and the device records the mileage and tank mileage range while in navigation mode.

Banks NAV uses the Banks iQ’s processing and GPS muscle, so you won’t need another device propped up on the dashboard.
A. The map view has three viewing modes, heading up, north up, or 3D, which are selectable on the main map page—not buried deep within a submenu.
B. Identifies the next route direction change in navigation mode or the next approaching road in map mode.
C. Turn-by-turn view, distance and direction of next maneuver.
D. Displays the estimated arrival time and distance to destination.
E. Turn-by-turn view selection. Choose between this main view and the Guidance View list, which identifies all the required maneuvers for the route.
F. Indicates the destination of the desired POI or current road traversing.
G. Main menu button for access to the six primary user selections: Where To?, History, Nearest POI, Go Home, Save to Favorites, and Settings.
H. Touch-N-Go quick access to stored destinations.
I. Zoom in and out on the map view.
View Photo Gallery | 4 Photos
Photo 4/4   |   banks Nav For The Banks Iq Lost navigation Screen Shot

- OF
By Joe Burnside
39 Articles

Truckin
Truckin
how to
1972 Chevy K5: Resurrecting the Sublime Blazer- Part One
Resurrecting the Sublime Blazer, part one.Off Road Evolution installs new...
Jeremy Cook – Oct 23, 2020
Truckin
Truckin
features
1972 Chevy K5: Resurrecting the Sublime Blazer- Intro
Recently, Truckin embarked on a little project that had been probably ten years in the making, ressu...
Jeremy Cook – Oct 22, 2020
Diesel Power
Diesel Power
how to
Becoming BluMajik
It has long been said that “good things come to those who wait.” We tend to agree with this idea...
K.J. Jones – Oct 22, 2020
Truck Trend Network
Truck Trend Network
how to
How To Mount A Power Tank In Your Wrangler JL
Power Tanks are one of those products that once you have used one, it’s tough to go back to anythi...
Sean P. Holman – Oct 20, 2020
Join Our FREE Truck Trend Network Newsletter