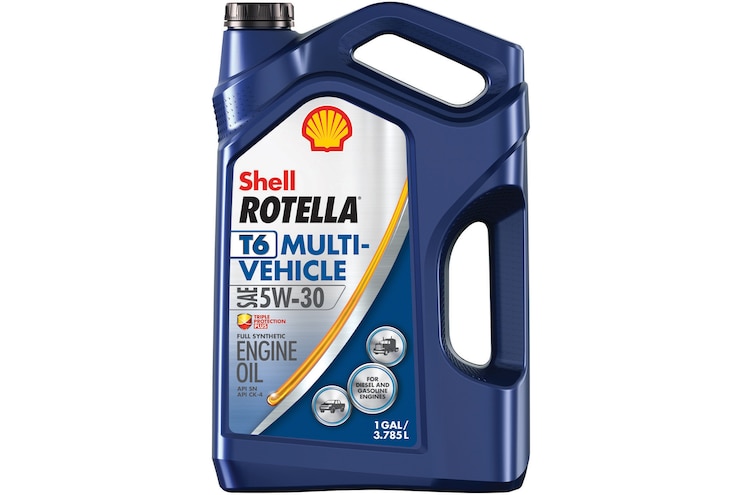 Often the bane of most fleet operators and consumers is stocking different oils for gasoline and diesel engines. A new oil by Shell aims to solve this issue by offering a 5W-30 full-synthetic heavy-duty oil for both gasoline and diesel engines, including Class 6-8 heavy-duty trucks. Plus, this oil is good for use in new and older vehicles without any modifications. It is likely the largest advance in engine oil in quite some time and will improve fuel economy when replacing heavier oils.
Introduced at the 2016 SEMA Show in Las Vegas, the new multi-vehicle Shell oil is meant to satisfy consumer demands for a single oil to use in the two different engine types, simplifying oil purchases. Also, since diesel oil changes are typically more expensive than gasoline, this new oil could save consumers and fleet managers money. 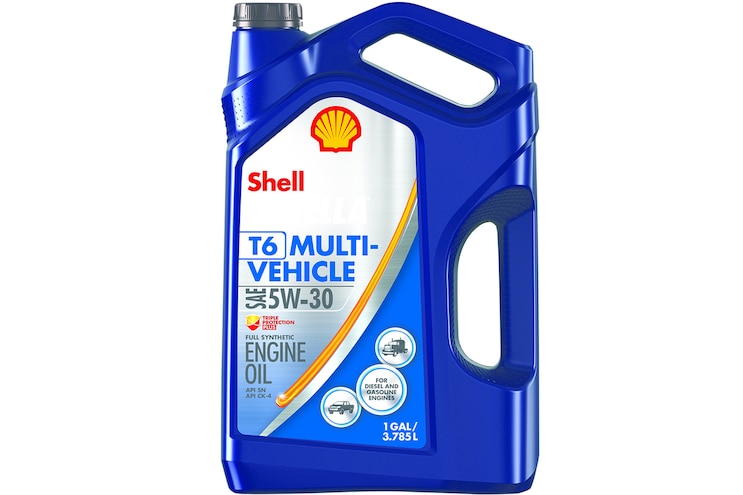 View Photo Gallery | 3 Photos
Photo 2/3   |   Rotella T6 Multi Vehicle US
“One of the reasons we really started to come out with this product was the feedback we got from our customers,” Dan Arcy, Shell’s global OEM technical manager for the Americas says. “They really loved the way the Rotella products worked in their diesel trucks. They wanted something to work in their gasoline pickup or SUV.”
Developing this oil required Shell to do a number of things to make it meet certain requirements, especially on passenger cars. Specifically, Shell engineers had to work with the levels of phosphorous (a main oil conditioner); too high of a phosphorous level has been linked to excessive wear of engine parts.
“We had to design the oil with a lower phosphorous level so it would provide protection to the catalyst in that application,” Arcy says. “Then we had to introduce non-phosphorous chemicals to boost the oil to give the diesel side the protection it is accustomed to from the Rotella products.”
Starting work on this challenge back in June 2011, Shell engineers first developed new oil formulas and then bench-tested these new prototype oil formulas on a lab table, looking at various attributes of the oil’s performance, like wear, dispersancy, and corrosion, for example. It was then tested to meet certain American Petroleum Institute (API) requirements. Finally, there was one more test.

View Photo Gallery | 3 Photos
Photo 3/3   |   Updated Rotella T6 MV US
“One of the things Shell does with our Rotella oil is put it out in the field and run it,” Arcy says. “For our next-generation engine oils, we have accumulated more than 45 million miles in all testing in all sorts of applications and vehicles.”
Testing also included more than 50,000 hours in heavy-duty equipment, gasoline taxi cabs in New York City, and various pieces of construction equipment.
Another benefit of thinner oils is better fuel economy. While many think only truck manufactures have to worry about meeting tougher CAFE standards, third-party suppliers like oil manufacturers are also facing this challenge. Developing new products to help OEMs meet their fuel economy targets is a big part of their future business plans. Shell is no exception, and this oil can offer improved fuel economy of 2.8 percent when compared to 15W-40 oils.
The new Rotella T6 Multi-Vehicle 5W-30 full-synthetic oil also meets PC 11 (proposed category 11 of oils). This new category, which went into effect December 1, 2016, drove new advancements in oil, like the T6 Multi-Vehicle Oil and two new categories: CK-4 and FA-4. The CK-4 replaces the current CJ-4 standard for higher-performance oils and the FA-4 is a fuel economy oil. The main difference between these two oils comes down to backward capability, meaning the CK-4 is a direct replacement for current oils in all current vehicles. FA-4 engine oils are designed primarily for next-generation engines with limited backward capability.