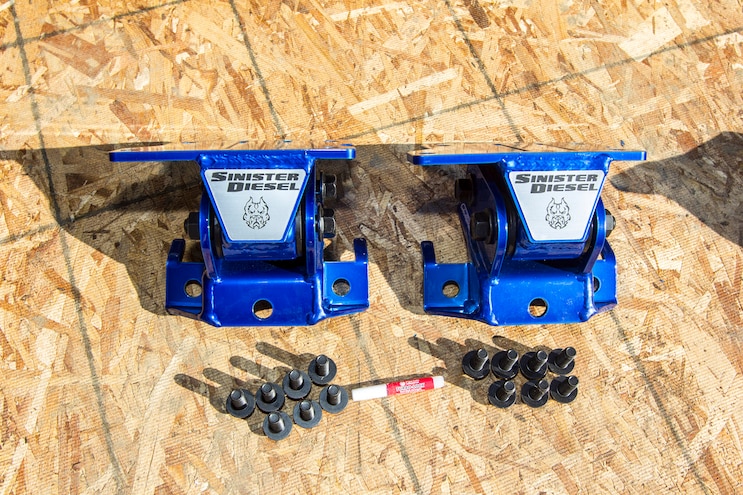 By now, we’re all familiar with the Duramax’s ability to produce vast amounts of horsepower and torque with nothing more than a few bolt-on parts and quality tuning. However, with the oldest of GM’s 6.6L diesel engines now reaching legal driving age themselves, it’s not surprising to see a few parts failures here and there. One area of concern—though rarely acknowledged by common owners and enthusiasts alike—lies in the factory engine mounts. Age, heat cycles, and stress from constant movement are all common causes of mount failure. Top that with the extreme torque a hopped-up engine can produce, and you’ve got the perfect storm for engine mount destruction.
Once one or more of the mounts fail, the engine is allowed more freedom to move about, placing undue stress on the transmission case at its mounting point. The best case is the transmission mount also fails; the worst case is the transmission housing itself cracks open. Fortunately, there is a solution. Sinister Diesel has recently pulled the wraps off its new Duramax engine motor mounts. Unlike the factory rubber mounts, Sinister’s version utilizes thick steel plate that is TIG-welded and produced in two separate halves joined together by a pair of polyurethane bushings and high-grade fasteners. The mounts are powdercoated Sinister’s signature blue and come with a lifetime warranty. Owners of ’01-to-’10 LB7, LLY, LBZ, and LMM trucks rejoice, because the mounts fit all of these trucks.

View Photo Gallery | 10 Photos
Photo 2/10   |   The complete Sinister engine mount kit includes both right and left side mounts, new mounting hardware, and a tube of thread locking compound. It will set you back about $400, which is double the cost of new factory replacements, but for what you get it’s well worth the cost of entry.
Replacing the engine mounts on a Duramax is not as complicated of a task as it might seem at first glance. While accessing the bolts can be a bit tricky, the job can be done in your driveway with an assortment of handtools. Not feeling up to the task? Any reputable diesel shop can do the replacement in a few hours. 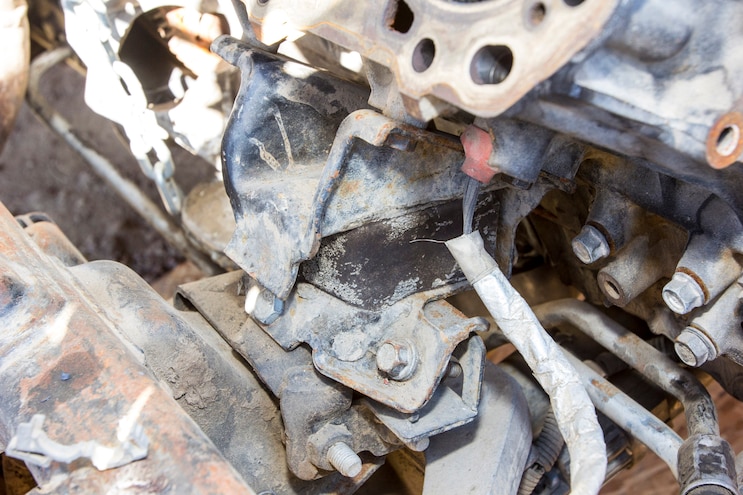 View Photo Gallery | 10 Photos
Photo 3/10   |   The trickiest part of the install is physically getting to the mounts. You’ll need to remove the fender liners on both sides, the steering shaft coupler, and the driver-side boost tube. With those parts removed, you will have access to the mounts. We’ve pulled a few more parts out of the way, in an effort to better show the process. 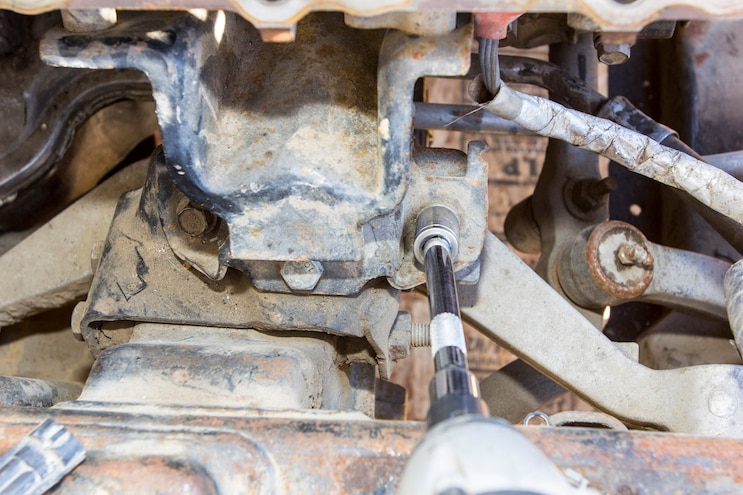 View Photo Gallery | 10 Photos
Photo 4/10   |   Working on one side at a time, eradicate the old, worn-out mount by first removing the three bolts that attach it to the frame. 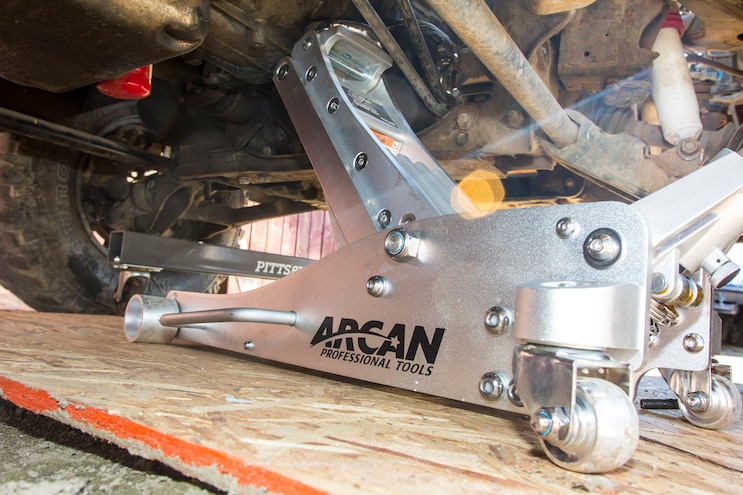 View Photo Gallery | 10 Photos
Photo 5/10   |   With the frame bolts out, the next step is to gently raise the engine by applying pressure to the transmission bellhousing with a floor jack or similar implement. This will provide enough room to loosen the four bolts holding the factory mount to the engine and slide it out of the way. 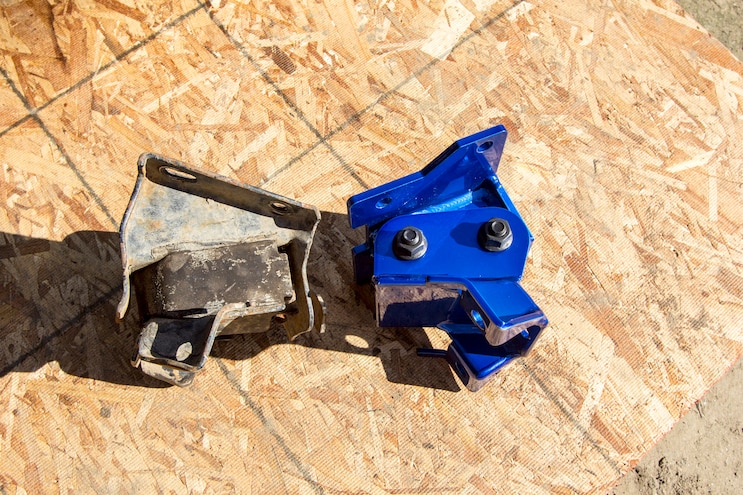 View Photo Gallery | 10 Photos
Photo 6/10   |   When the mounts are placed side by side, it’s easy to see why the Sinister mounts are much better. And who can resist the allure of their gorgeous blue powdercoat! 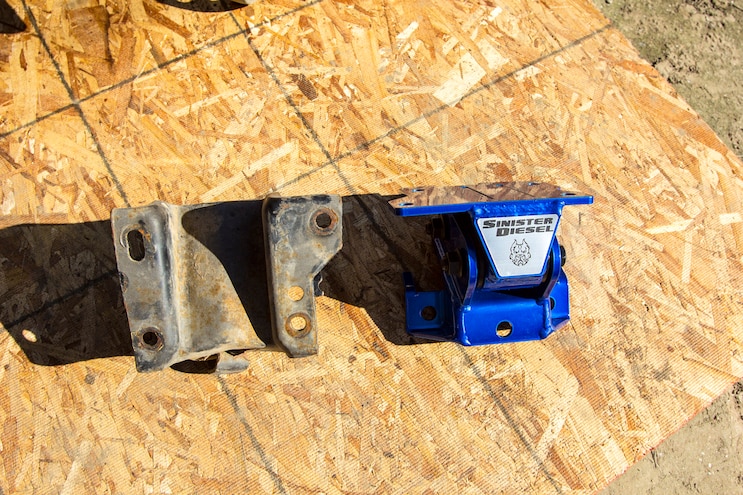 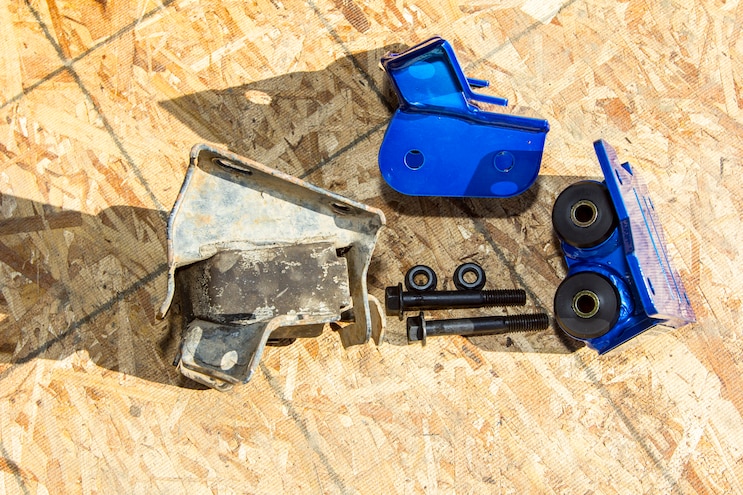 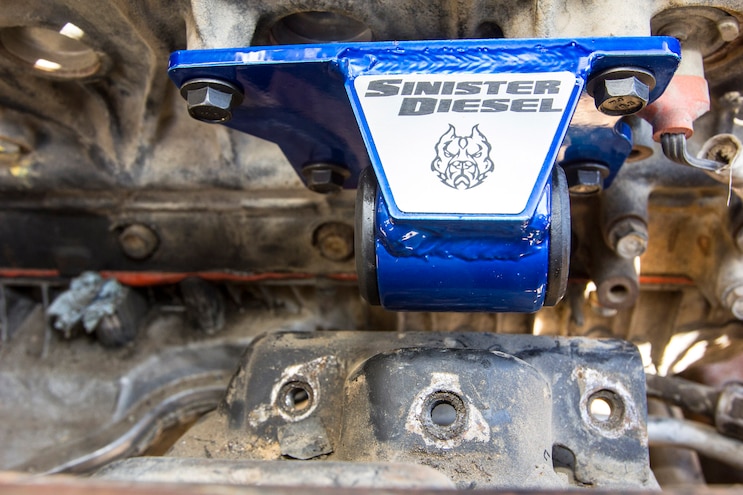 View Photo Gallery | 10 Photos
Photo 9/10   |   It’s easiest to install the two halves of the new mounts separately. First, the engine-side plate goes on, followed by joining the frame-side plate with it. With the two halves joined, the engine can be lowered back into place and the remaining bolts torqued. Don’t forget the thread locker when installing the provided hardware. 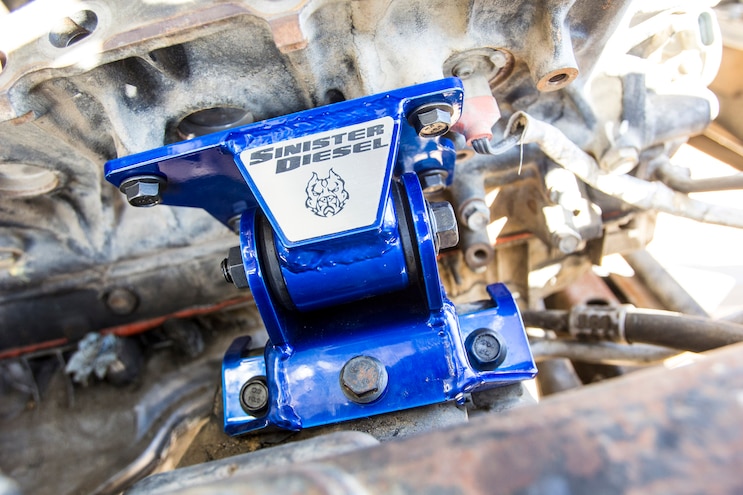 View Photo Gallery | 10 Photos
Photo 10/10   |   Congratulations on completing the first side. Now follow the same steps on the other side, reinstall any parts that were removed to gain access, and you are good to go.