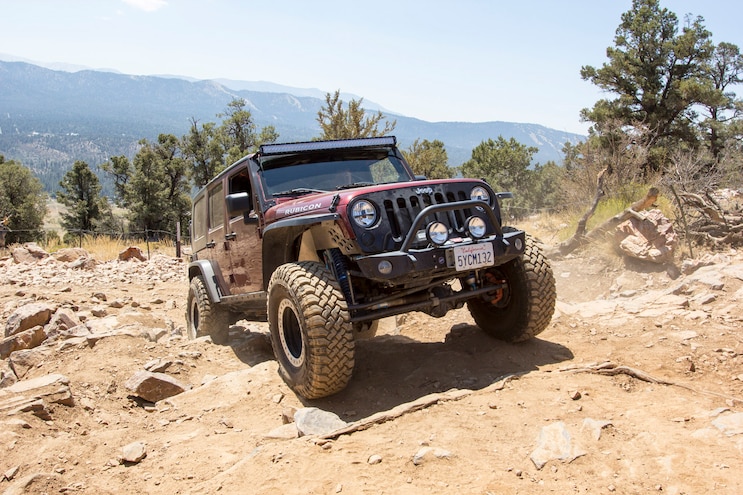 The factory headlights on the ’07-’16 Jeep Wrangler are bad—plain and simple. And when the Jeep is of the lifted variety, they become even more substandard. Their shortcomings are magnified when away from ambient city street lighting. That’s right, they suck. Fortunately, LED upgrades have become wildly popular and highly affordable.
Light-emitting-diode (LED) technology has been around for decades, but until recently, it’s remained out of reach to most individuals. However, thanks to advancements in technology and, let’s face it, overseas manufacturing, the cost has come down to a point where it’s now attainable. And because of the fad of putting LED lightbars on absolutely everything, there are more options than ever before. 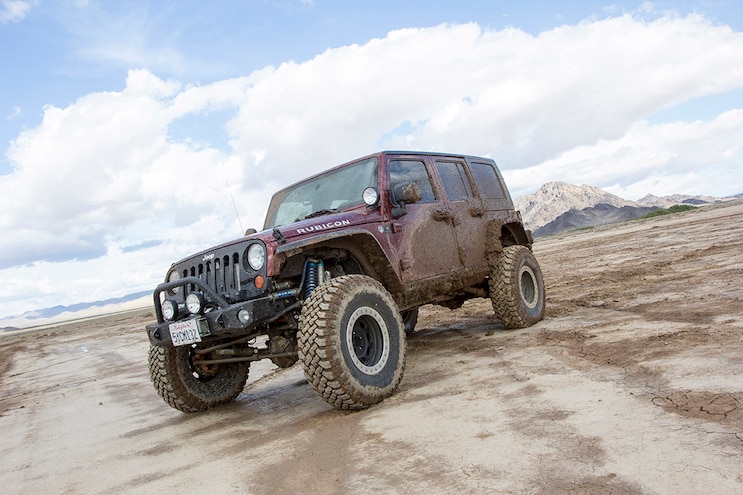 View Photo Gallery | 19 Photos
Photo 2/19   |   (Before) While we didn’t dislike the look of our Wrangler, we knew it could be modernized. The clear headlights and amber turn signals didn’t compliment the blacked-out grille very well, and the round A-pillar lights looked out of place on a mostly square Jeep.
Wanting to upgrade the performance of our Wrangler’s lighting without breaking the bank while also improving the look, we opted to install the full suite of available upgrades from Anzo USA. Anzo has been in the business of upgraded lighting for more than 30 years and has positioned themselves right in the sweet spot of the market. Their products are of a far higher quality than the low-cost knockoffs flooding the market, while being markedly less expensive than the ultra high-end allowing us to get far more bang for our buck.
Installation of all of the new parts took about two hours and was done in our driveway with common hand tools. While the install is straight forward, you will need a basic knowledge of, and tools for, wiring for the front turn signal resistors. Instructions were nearly nonexistent, so keep your smart phone handy if you’ve never changed your bulbs before. Overall, we’re beyond pleased with our upgraded LED lights and get questions about them everywhere we go.

View Photo Gallery | 19 Photos
Photo 3/19   |   (After) When done right, LED lights can give a Wrangler a clean modern look while providing more light than ever possible before with traditional round incandescent auxiliary lights.

LED lights are a fantastic upgrade and the output is truly superb. However, while Anzo’s headlights are DOT approved we immediately started getting flashed by oncoming traffic thinking that our high beams were on. While this may not be a uniquely LED issue, driving a lifted Jeep with bright lights that land square in the typical econobox sedan’s windows is not often met with understanding. For this reason it is very important that the headlights are properly adjusted as such to not get a friendly visit from the local constable. His lights are brighter and more colorful.
We also ran into issues with the roof bar singing away. This is not an issue unique to Anzo, but it does come with the territory of roof-mounted LED bars. Anzo provided a piece of weather stripping with the note to apply it to one of the cooling fins to dampen the harmonics. We needed to cover all of them to stop any sort of audible resonation. And remember the aforementioned constable? Be sure to also check your local laws about the legality of running a lightbar uncovered on the highway, as it’s not allowed in most places. 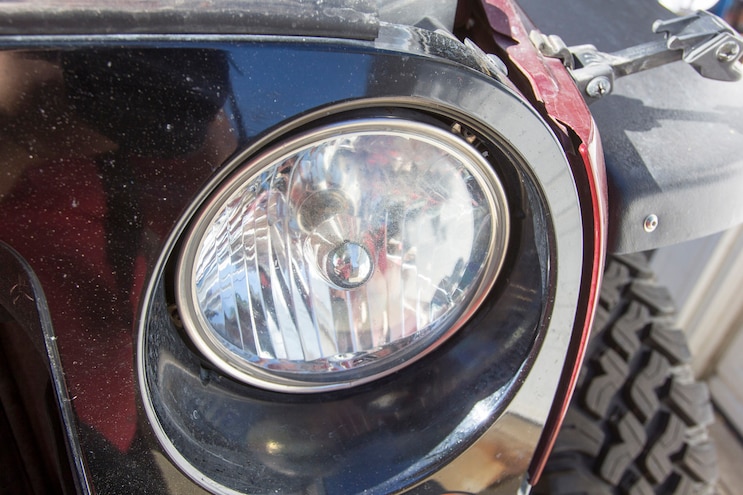 View Photo Gallery | 19 Photos
Photo 4/19   |   After nine years in the blistering sun, our Wrangler’s factory headlights had become slightly yellowed but had held up well overall. The light output, however, was seriously lacking. 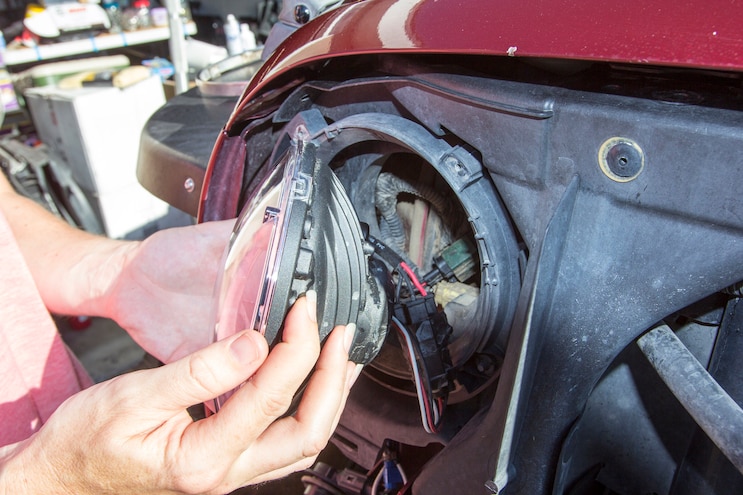 View Photo Gallery | 19 Photos
Photo 5/19   |   With the grille removed, the headlight retaining ring is loosened with the use of a T-15 Torx bit. The new LED headlights from Anzo are shipped with an H4-to-H7 adapter harness to combine their universal plug with the Wrangler’s factory harness.

View Photo Gallery | 19 Photos
Photo 6/19   |   Looking at the lights, the upper half is used as the normal low beam, and the lower half is the high beam optic. The crossbar in the center can be had in either black or chrome and features Anzo’s lightning bolt logo. 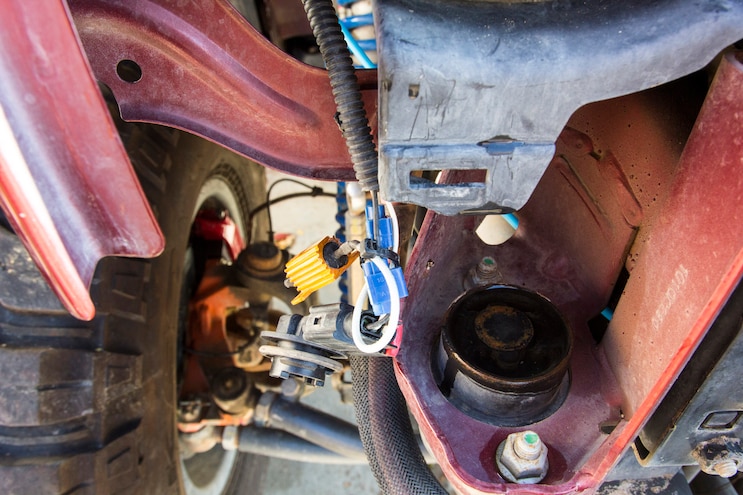 View Photo Gallery | 19 Photos
Photo 7/19   |   Moving to the marker lights, we opted to install Anzo’s smoked version to compliment our black grille and black-accented headlights. Since the amber LEDs draw less current than the factory incandescent bulbs, a resistor needed to be spliced in to keep the factory computer from thinking there was a dead bulb and keep the blink rate normal. 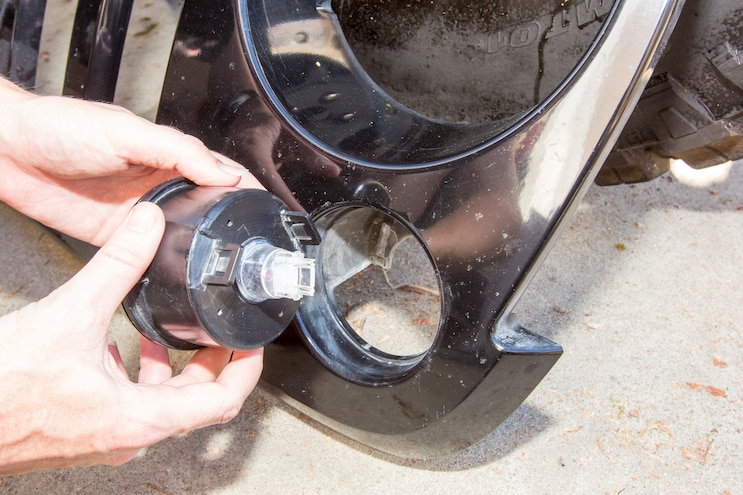 View Photo Gallery | 19 Photos
Photo 8/19   |   Utilizing plastic clips molded in the body, Anzo’s marker lights, which double as turn signals on the Wrangler, install exactly as the factory units do. However, due to their added length, they tend to interfere with the forward-most body mount. 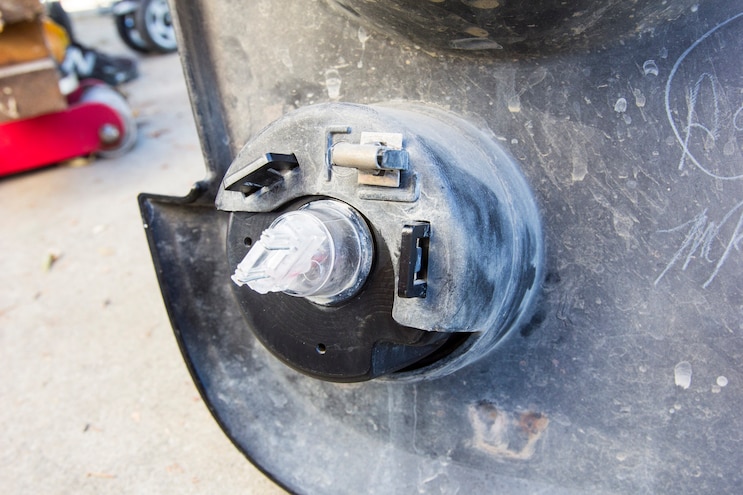 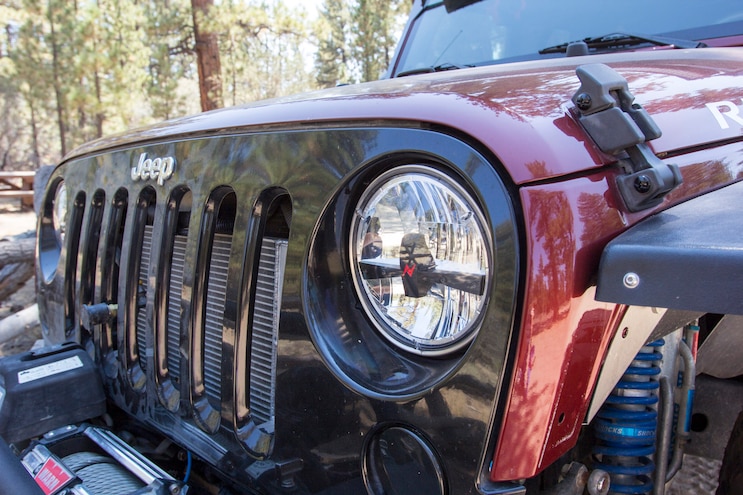 View Photo Gallery | 19 Photos
Photo 10/19   |   We opted for the black center accent on the headlights and smoked markers to match our blacked-out grille. With everything back together, the Anzo headlights and markers add a nice bit of flair to go along with their improved light output. 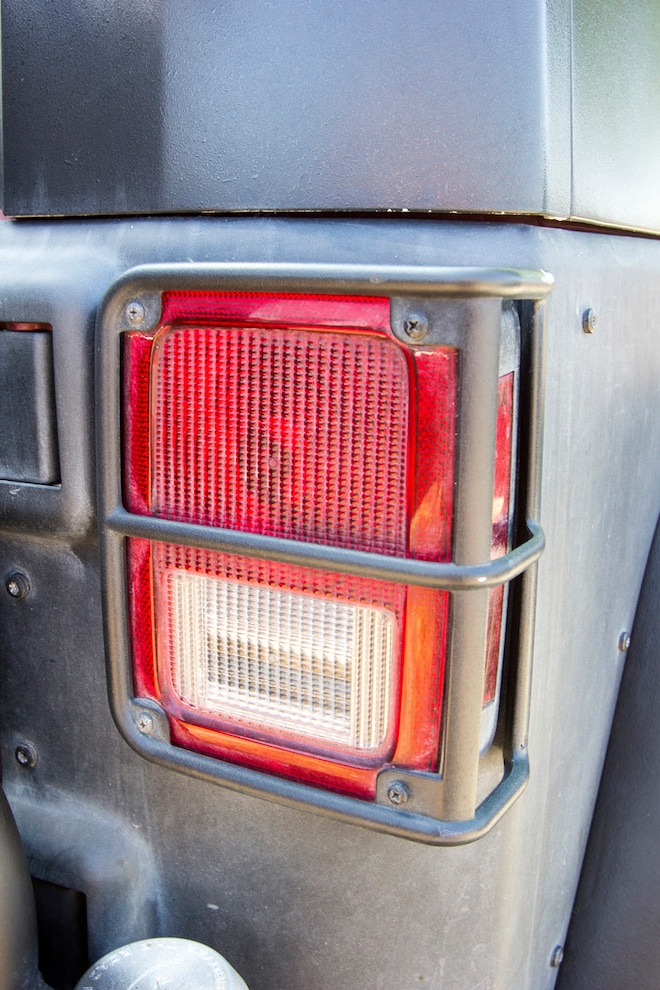 View Photo Gallery | 19 Photos
Photo 11/19   |   With the front done, we headed to the rear of the Jeep. The factory taillights were adequate in ’07 when the JK Wrangler was introduced, but by today’s standards, they’re awfully plain. 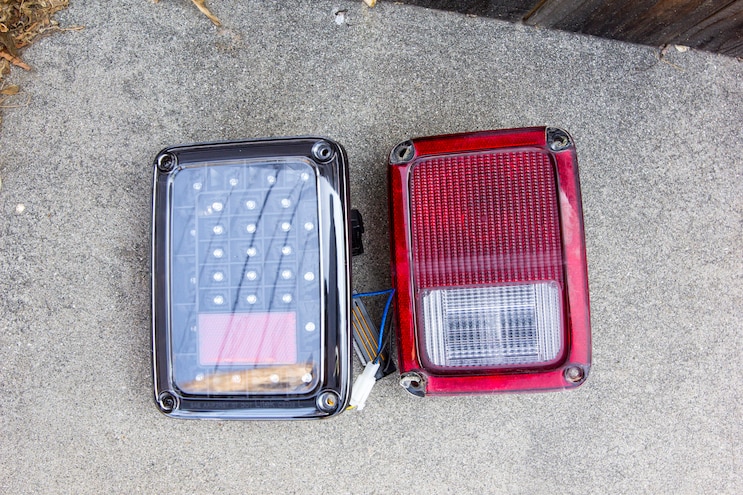 View Photo Gallery | 19 Photos
Photo 12/19   |   We again opted for the blacked-out version of Anzo’s LED taillights to stick with out Jeep’s theme. They can be had in chrome, black, or smoked to suite any taste. 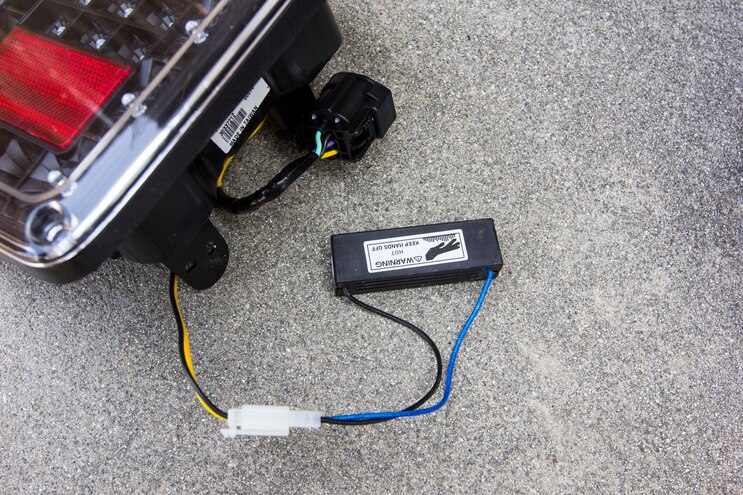 View Photo Gallery | 19 Photos
Photo 13/19   |   Like the front, the rear taillights require a resistor to ensure the proper blink rate of the rear turn signals. Unlike the front, however, the rear came set up with a plug-and-play unit rather than one requiring splicing. 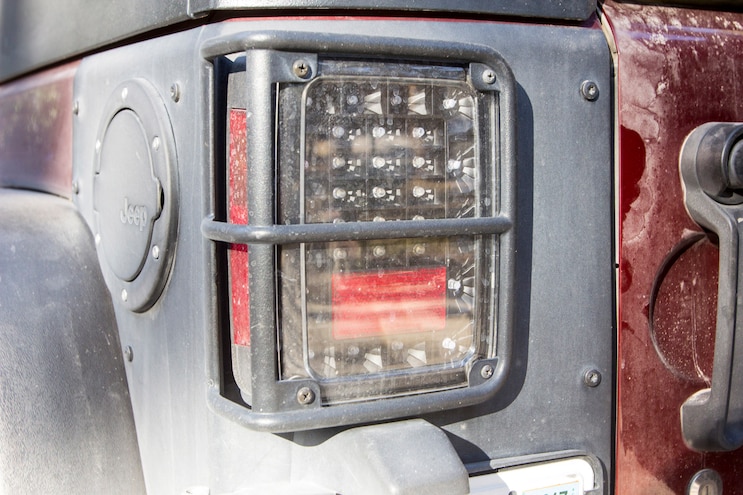 View Photo Gallery | 19 Photos
Photo 14/19   |   The taillights install exactly like the factory units do, and their fit and finish is on par with OEM. Two screws hold the lights to the body, and there are no issues with aftermarket covers such as our Mopar guards. 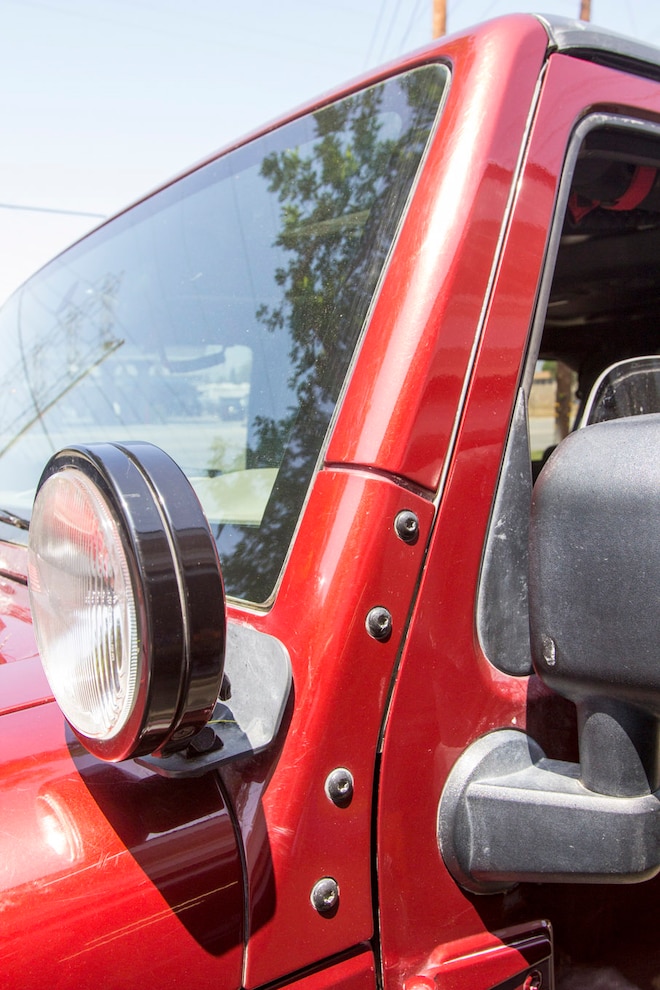 View Photo Gallery | 19 Photos
Photo 15/19   |   A-pillar mounted lights have been all the rage since the Wrangler was introduced in 1986, but times and styles change. After years of faithful service, our old Hella lights were no longer working and the brackets had faded to a chalk color, so it was time to upgrade. View Photo Gallery | 19 Photos
Photo 16/19   |   We decided to ditch the round lights and instead install a 52-inch LED bar along the roof, as has become popular these days. Fortunately, Azno offers not only the lightbar but also the brackets to mount it. These brackets are made from formed steel, are powdercoated black, and use the existing windshield hardware to attach to the Jeep. 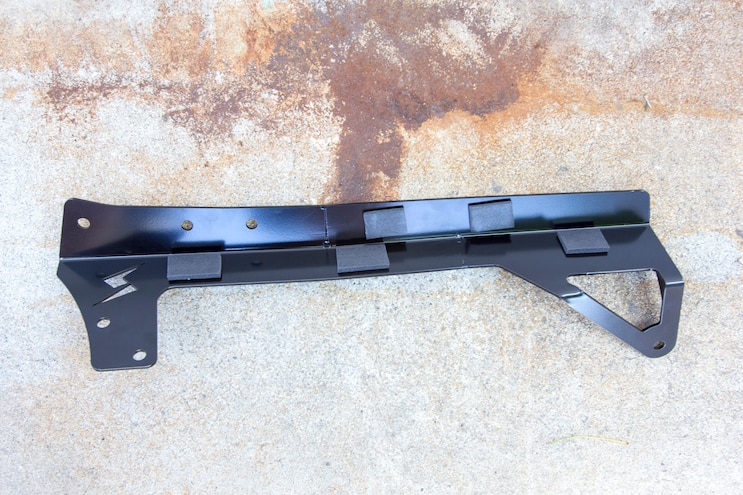 View Photo Gallery | 19 Photos
Photo 17/19   |   Supplied with the brackets are small nuggets of foam complete with an adhesive backing. These are meant to protect the Jeep’s paint from damage caused by the brackets rubbing. It’s best to test fit the brackets first to determine the proper placement, as the included instructions don’t mention where they will be needed. View Photo Gallery | 19 Photos
Photo 18/19   |   We opted for the largest LED bar that Anzo offers, which is their double-row 52-inch unit. Each diode draws 3 watts, for a total draw of 252 watts and 16,800 raw lumens of light. This is a more than enough to light up even the darkest trail. 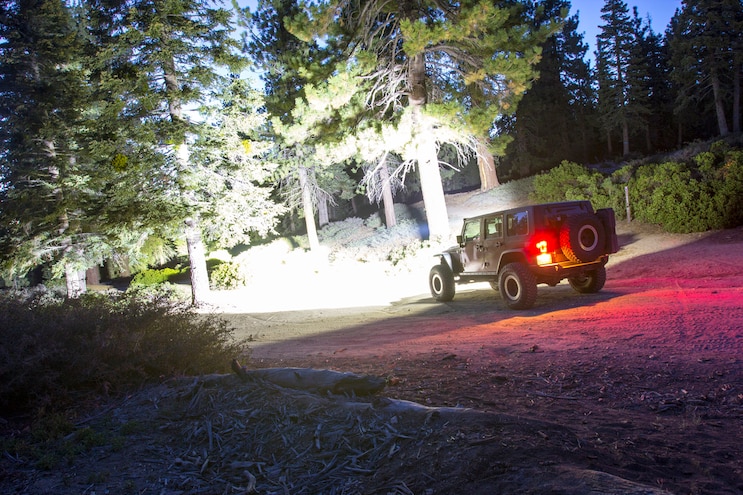 View Photo Gallery | 19 Photos
Photo 19/19   |   All told, the full suite of LED light upgrades from Azno offered us better looks, improved safety on the road, and an abundance of light for the trail.