Alpine’s Party In A Box 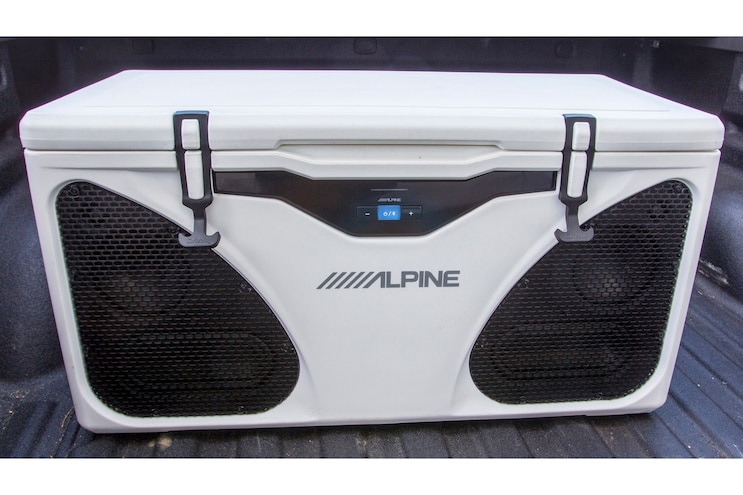 Almost as important as our pickups are the things we put in to them, the places they take us, and the memories that we make with them. No matter where the adventure leads, whether it’s camping in the mountains, biking in the hills, racing on the track, or relaxing on the beach, there’s one accessory that almost always accompanies the fun. Richard C. Laramy of Joliet, Illinois, filed for a patent on the very first portable ice chest on February 24, 1951. His request was granted in December 1953 and tailgating has never been the same since.
For the bulk of its deceptively short life the basic design of the cooler has remained largely unchanged: a plastic shell over foam insulation. There were a few variations over the years, such as Coleman’s metal-sided cooler, which is still sought after today. Arguably the cooler’s first major advancement in technology came at the end of the 2000s, as Roto-molded plastic ice chests took over as the new premium boxes. Able to keep ice longer, resist intrusion from even the fiercest land mammals, and look cooler doing it, brands like Grizzly and Yeti cemented themselves at the top of the food chain.

View Photo Gallery | 10 Photos
Photo 2/10   |   Alpine markets the ICE cooler for use when tailgating with trucks and SUVs. During our time with the cooler, we decided it’s also a great fit for boaters and UTV enthusiasts alike. Any place that has 12V power and no stereo needs an ICE.
Fast forward a few more years and we now find ourselves on the cusp of the next great revolution in the science of party. Alpine, a world leader in mobile electronics and audio, teamed up with the cooler makers at Grizzly to combine 180 watts of Bluetooth-controlled beats with a high-capacity 56-quart cooler. What they’ve created is the first-of-its-kind Alpine In-Cooler Entertainment, or ICE for short.
Before we go any further, we need to address the elephant in the room: price. With a street price of $1,500, this ice chest definitely isn’t for the casual enthusiast. Alpine’s ICE is a gadget for those with a taste for the finer things and the means to acquire them. Since a base Grizzly cooler in a similar size will set you back nearly four bills by itself, we weren’t awfully shocked at price tag that the ICE carries, but that doesn’t make it sting any less. 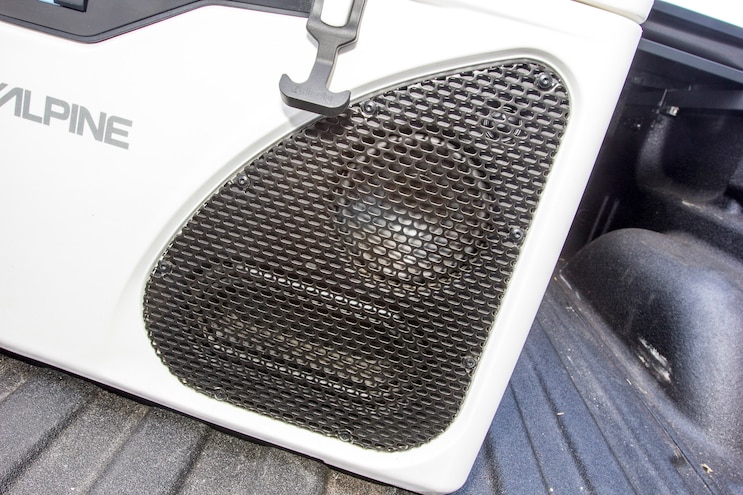 View Photo Gallery | 10 Photos
Photo 3/10   |   With the end goal being to deliver high quality sound, Alpine spared no expense on the audio components. Specifically designed for ICE is a pair of 5 1/4-inch components with 1-inch tweeters and a pair of 4x8-inch bass radiators.
Make no mistake—ICE is anything but your base cooler. The outer shell is custom Roto-molded to the exact specifications that Alpine requested to house its speakers, amplifier, and control system. A pair of 5 1/4-inch waterproof two-way component speakers is mounted in the front of the cooler, along with a pair of 4x8-inch bass drivers. The speakers are powered by a 90-watt-per-channel amplifier that sources its power from a standard 12V receptacle with either 10- or 15-amp user selectable input voltages.
We spent a few weeks with one of Alpine’s ICE coolers in our possession and were able to put it through its paces in a variety of situations. The first thing that we noticed is that it’s heavy. Empty, ICE tips the scales at 48 pounds. And although Grizzly’s nylon rope handles are comfortable and confidence-inspiring—we never doubted they would hold up to the weight of the loaded cooler—its width makes the cooler a bit too cumbersome for one normal-sized person to carry when it’s loaded. If you’ve got a huge wingspan, your mileage may very. 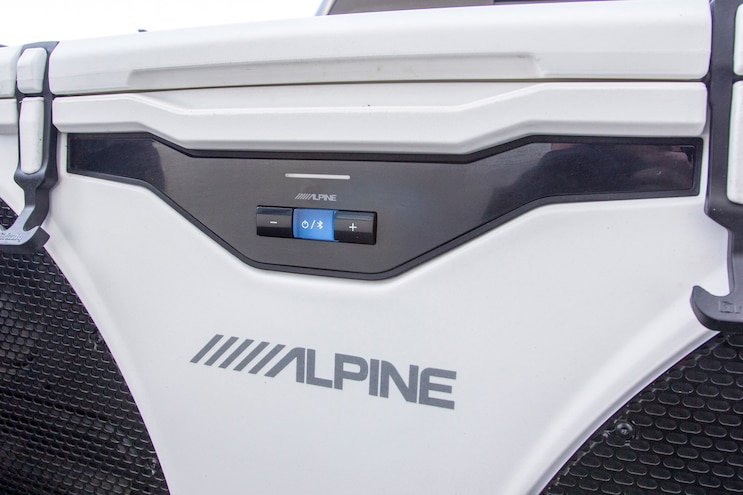 View Photo Gallery | 10 Photos
Photo 4/10   |   Controls are minimalistic, with only three buttons gracing the face. Power and Bluetooth sync share a button in the middle, while volume up and down grace the outer edges. An illuminated bar indicates volume level at the cooler, though volume can also be controlled via the Bluetooth device.
Despite losing some interior space to the speaker enclosures, we found the size of ICE to be perfect for a three-day weekend. Capable of holding 56 quarts, it’s often also referenced as holding 72 cans. While this fact is true, it’s without ice. We loaded the cooler down with a variety of beverages, from tall and frosty to a half-gallon of milk. Topped with 20 pounds of ice and left outside in the sun, it took two days for the ice level to melt to the point where we wanted add more, though it wasn’t explicitly necessary. Topped off with another 16 pounds the cooler kept solid ice for another week, which was truly impressive given the amount of time it spent being opened.
While the cooler is impressive in itself, it’s the speakers that really blew us away. We connected the cooler to our vehicle’s 12V power port, synced our iPhone to its Bluetooth connection, and proceeded to piss everyone off with its power. To say the cooler gets loud is a bit of an understatement, and we only had it connected to 10-amp power; connected to 15 amps, it kicks even harder. Sound quality was second to none, even out in the open air. The bass was deep and vocal tones crisp. The Bluetooth connection is said to work for about a 30-foot radius, and we found this to be mostly true. If you duck behind an object, such as, say, the other side of your pickup, the signal can become compromised. Our solution was to leave the phone near the cooler and control it via our Apple Watch. Nerdy, we know, but it worked great.
Our time with Alpine’s ICE was too short, and it was a sad day when we had to say goodbye. In theory, concept, and execution, we’d have to say that Alpine and Grizzly absolutely nailed it. The cooler is truly in the upper echelon, not only of coolers but of mobile electronics as well. The ability to take high-quality music wherever your sense of adventure takes you, without needing a separate stereo, fills a need that we didn’t even know existed. Our biggest grumble still revolves around the price, as it’s too steep to find its way into our garage any time soon. But we’re certain that those who do pick one up will be nothing short of thrilled with this amazing piece of tech. 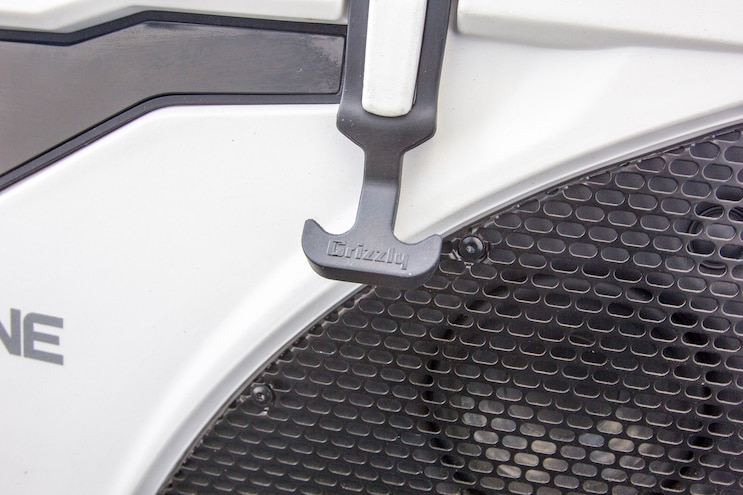 View Photo Gallery | 10 Photos
Photo 5/10   |   Grizzly’s Bear-Claw latching system uses a pair of rubber clasps to hold the cooler’s lid shut. On cold days they can be quite stiff, providing a very positive latch. They are especially great at keeping kids’ hands away your cold ones. 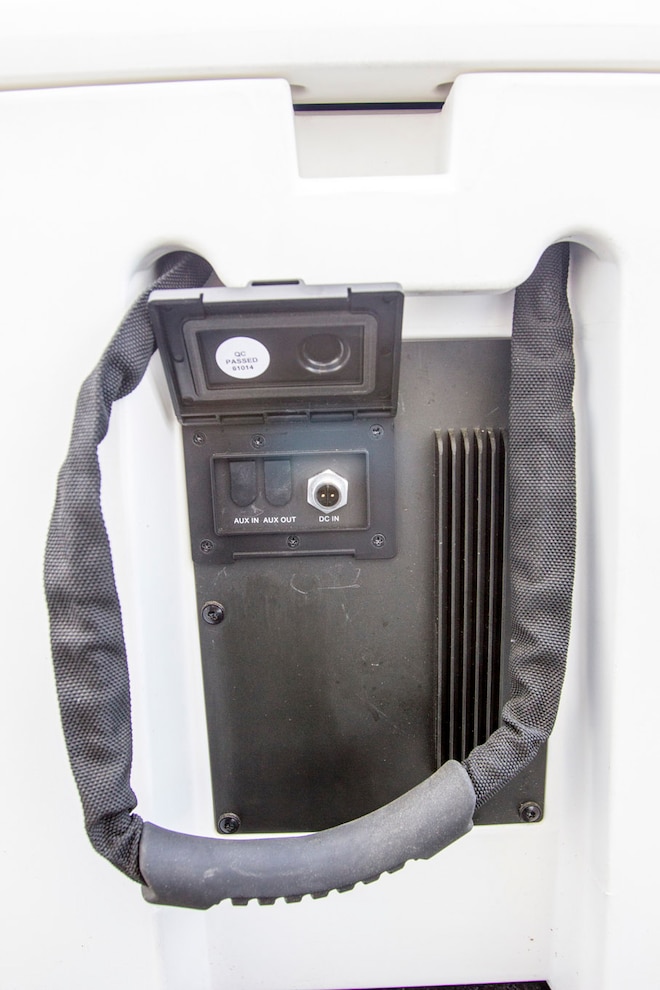 View Photo Gallery | 10 Photos
Photo 6/10   |   The cooler’s amplifier is mounted along the right edge near the handle. Also located here is the DC power port, along with 3.5mm input and output jacks. Feeling real crazy? You can link multiple ICE coolers together via these jacks. For ICE 2.0, we’d love to see a 120V option so we can use the cooler for home-based parties as well. View Photo Gallery | 10 Photos
Photo 7/10   |   A massive 2-inch drain plug ensures that the cooler drains quickly and completely when the party is over. We can’t imagine this plug is cheap to replace, so a tether would be a nice addition. 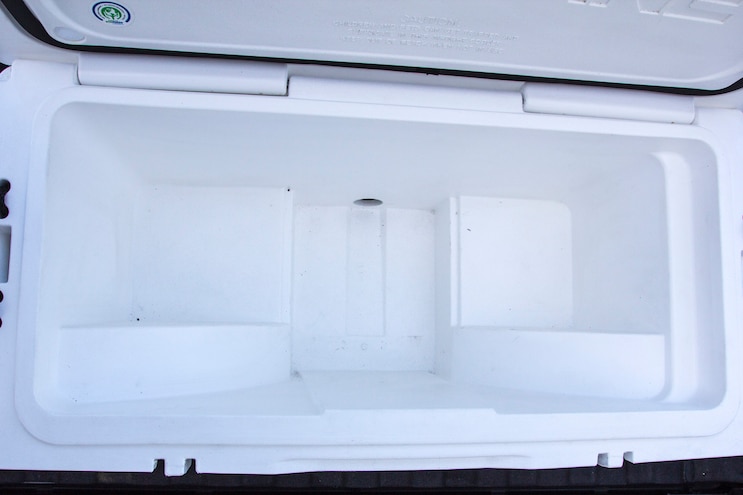 View Photo Gallery | 10 Photos
Photo 8/10   |   Looking from the top down you can clearly see the molded pockets that house the cooler’s speakers and electronics. Alpine designed these with the proper air space to produce the killer sound they desired. 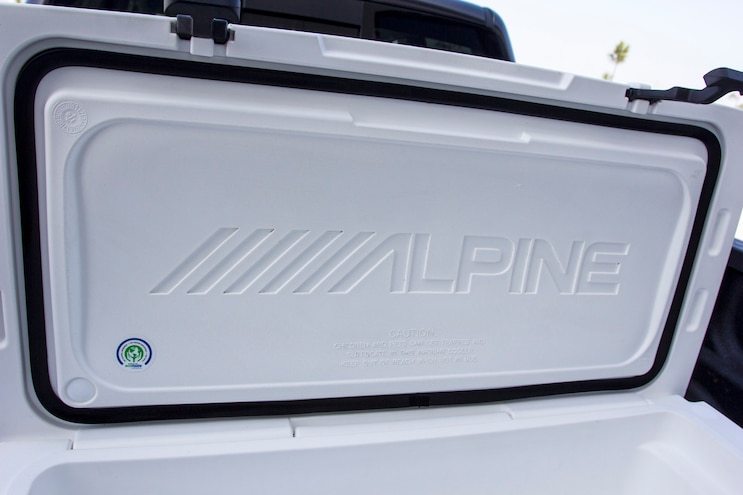 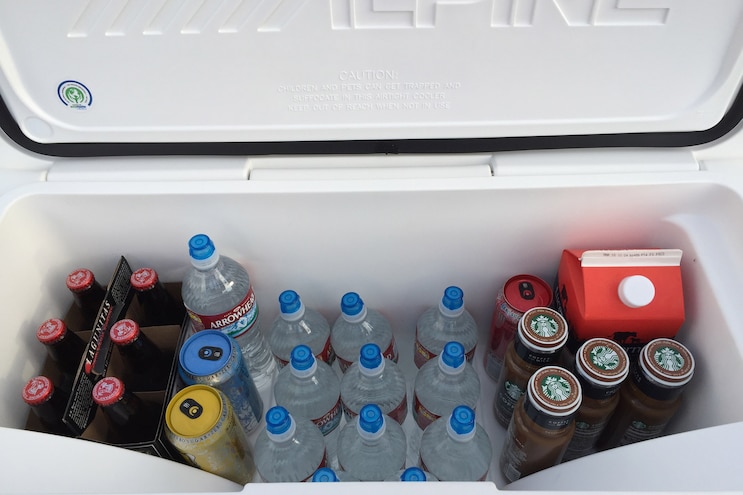 View Photo Gallery | 10 Photos
Photo 10/10   |   We loaded the cooler down with a sixer of local brew, three 16oz energy drinks, a dozen sport-top water bottles, four chilled coffees, and a 1/2 gallon of milk. This left us room for nearly 30 pounds of ice. While it may not be 72 cans, it’s definitely enough to get the job done.