Light the Way with Custer Products 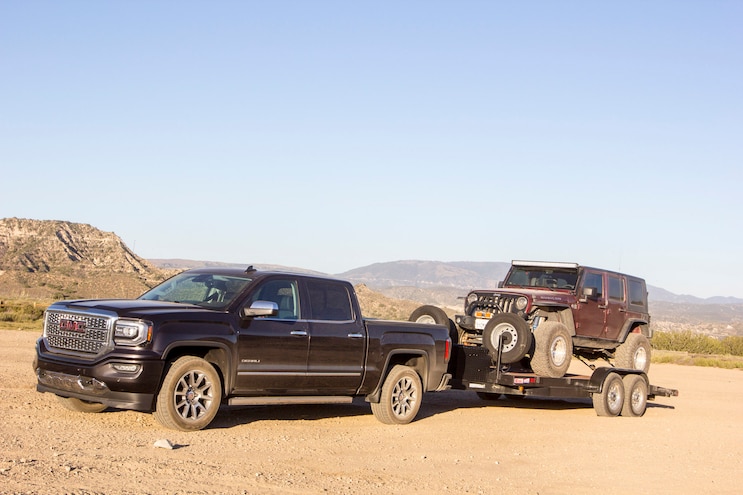 It’s arguable that an operator’s trailer is his second most important tool, behind only the pickup towing it. And as anyone who has towed anything before can attest, one of the most frustrating experiences (aside from reversing, for some) is loading, unloading, and maneuvering in the dark.
There’s no secret that utility trailers today come woefully ill-equipped when it comes to lighting, often sporting nothing more than the bare minimum for DOT compliance. Ancient incandescent technology is still the standard, and any kind of weatherproofing is almost certainly an upcharge. Fortunately, we live in a time when light-emitting diode (LED) technology is improving at a quick pace, and prices are dropping equally as rapidly.
When it came time to set about upgrading the lighting on our utility trailer, we turned to the lighting experts at Custer Products. Custer deals in all things lighting, from heavy industrial applications to towing, agricultural, marine, RV, and more. For our project, we tapped the company’s new Never Night line of off-road lights, along with its Lite-It utility lights. Being able to upgrade all our trailer’s lighting from one catalog was certainly a nice touch, but it’s worth noting that Custer doesn’t sell direct to the public, meaning the lights need to be acquired through a distributor, such as your local trailer parts house or online truck and trailer parts retailers.

View Photo Gallery | 8 Photos
Photo 2/8   |   Whether you’re hauling heavy equipment, tools and gear, or toys on the weekend trailer, visibility is of the utmost importance. Nothing is more frustrating than loading up in the dark with a subpar flashlight taking up space in one of your hands or having your trailer hit by the yuppie SUV driver who isn’t paying attention to anything but Facebook.
Overall, we’re extremely pleased with the fit and finish of all the Custer light products we tested. The power output is impressive given the small packages, and the company has applications to fit any need or desire. We’ve always been of the opinion that it’s exceedingly important to be able to see and be seen when it comes to operating with a trailer in tow, so adding an LED light package is a no brainer. We’d encourage anyone who tows to follow suit. 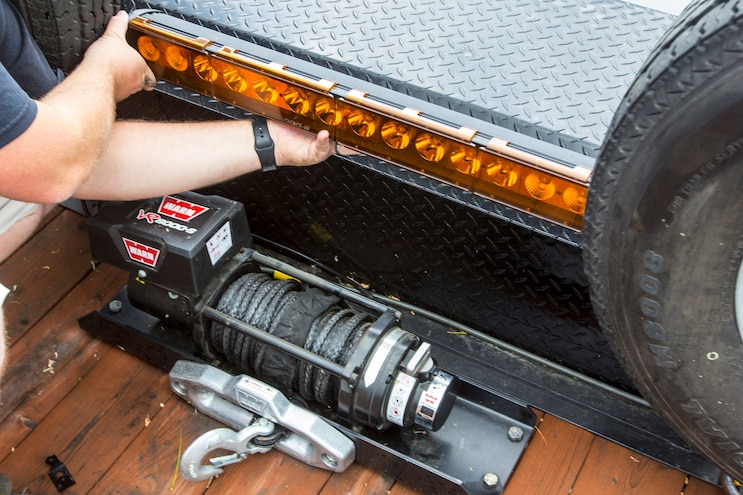 View Photo Gallery | 8 Photos
Photo 3/8   |   Lightbars have become an incredible fad in the pickup space over the past few years, led largely by the increase in quality and reduction in price. However, not many people have thought to adapt them for trailer use. With a desire to light up the trailer deck, we opted for a 30-inch worklight from Custer Products’ Never Night line. This bar is overkill, producing 12,600 lumen while drawing 140 watts. It uses 14 10-watt CREE LEDs, carries an IP67 rating for water and dust intrusion, and is covered by a three-year warranty. We opted to add amber covers to help diffuse the light and tone the brightness down for our desired use. 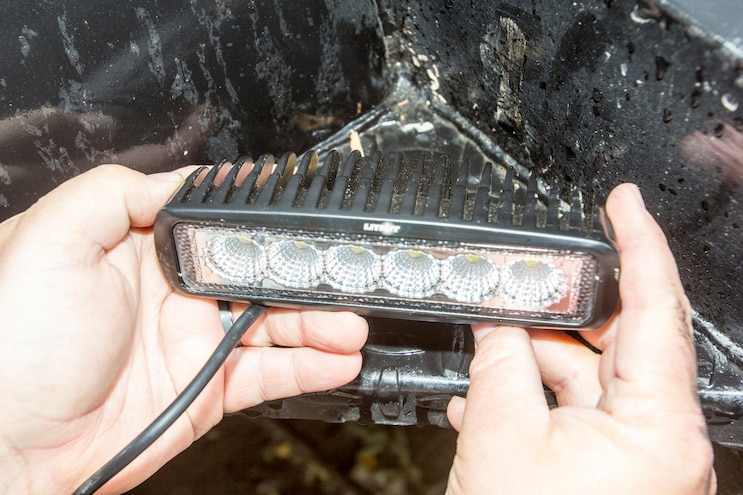 View Photo Gallery | 8 Photos
Photo 4/8   |   We don’t always work on projects on the deck of our trailer—they sometimes happen off to the side. Knowing this, we opted to install four 18-watt work lights facing outboard, two on each side of the trailer. These lights have a compact size and utilize six 3-watt LEDs with a 90-degree beam pattern. The mounting brackets are a bit difficult to attach to the housing, but it’s nothing out of the ordinary for the LED light industry. Careful consideration had to be made when it came to mounting these, as their placement needs to avoid interfering with the deck, and they need to tuck up high enough to not get knocked off by road debris—all while not impeding use of the trailer. Our preferred mounting position turned out to be a place we frequently used as a step, so it was quickly on to Plan B. 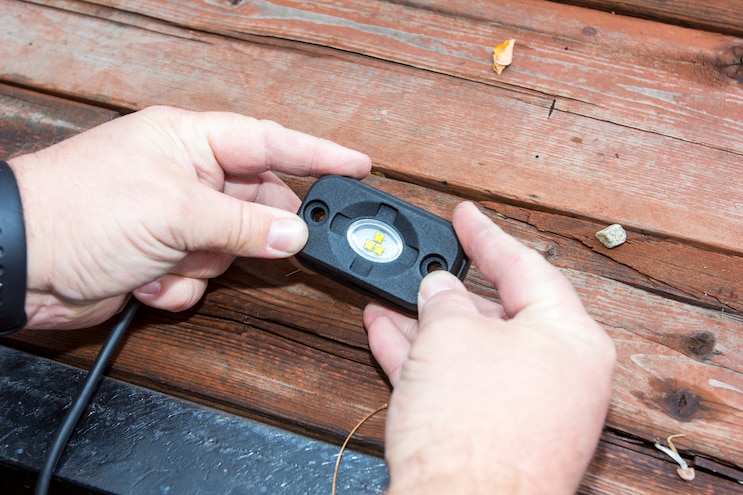 View Photo Gallery | 8 Photos
Photo 5/8   |   Of all the fads we were glad to see die, neon underglow lights are certainly near the top of the list. However, when thinking of where light would be most needed on our utility trailer, we came to the realization that lighting up the area directly underneath and around the trailer would pay dividends in low-speed maneuvering and backing operations. It would also be helpful should the need to replace a tire at night occur. To fill this need, we chose a quartet of 15-watt compact work lights. The lights measure 1¾ inches tall by 3 inches wide and are ½-inch thick. They sport three 5-watt LEDs and broadcast 1,260 lumen in a 120-degree pattern. The lights also come with two super-trick rubber mounting pads. We opted to place them fore and aft of the axles, lighting up the area under the deck. 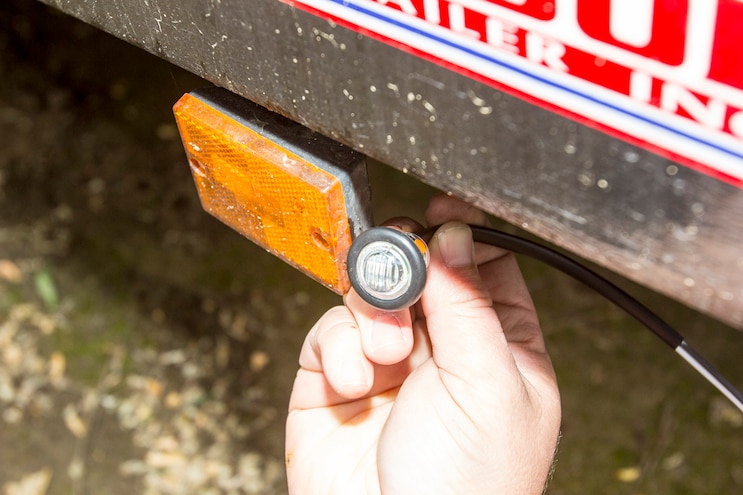 View Photo Gallery | 8 Photos
Photo 6/8   |   It’s not only about seeing, but being seen as well. Factory marker lights typically meet the DOT’s bare minimum requirements, and trailer manufacturers aren’t adding any extras. We replaced our clunky incandescent marker lights with these slick LED units. The markers mount in a ¾-inch hole, have a clear lens, and glow amber. They carry full DOT approval and are far brighter than the trailer’s factory lighting. In addition to replacing the factory lights, we also added six more as cheap insurance against rogue SUV encounters. 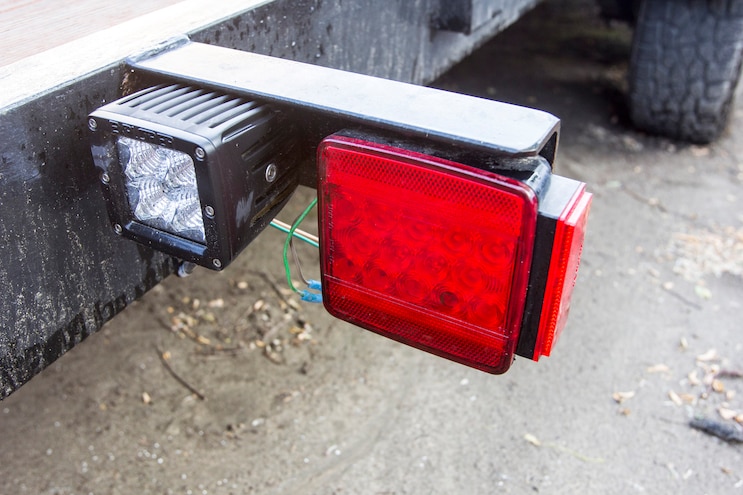 View Photo Gallery | 8 Photos
Photo 7/8   |   While we were updating the lighting, we decided it would be prudent to do the taillights as well. It’s shocking how old the technology is that manufacturers still use—even on high-end utility trailers. We pitched our factory lights in favor of Custer’s slim LED units. Each one uses 15 LEDs; at 2 inches thick, they’re about half the size. The stud mount employed is universal and made for a simple installation. However, the wiring is much improved, which meant we needed to splice them into our factory wiring. They are available with and without a license plate light. We opted to go without since our plate already has an LED light on it, keeping us legal at night. 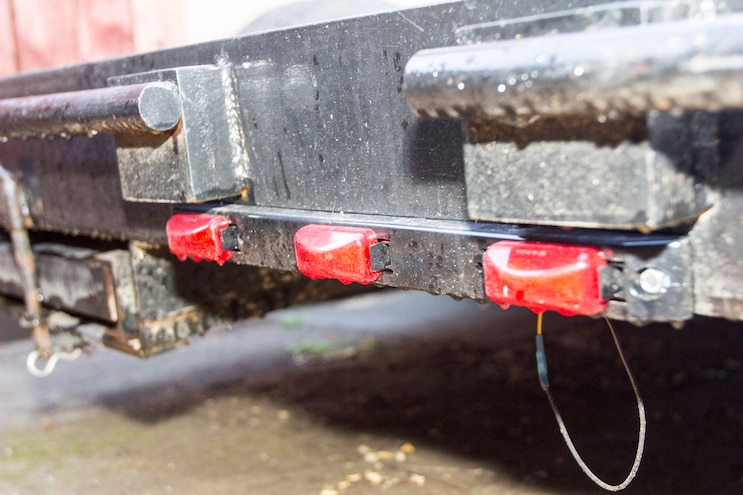 View Photo Gallery | 8 Photos
Photo 8/8   |   Rounding out the lighting package is an LED rear marker light. The bulbs in our factory marker died just months after it was purchased, so upgrading to LED was a no-brainer. The Custer unit was a bit wider than our factory-installed bar, meaning we needed to drill new bolt holes, which, in the grand scheme of things, was no big deal and well worth it to round out the upgrade package.