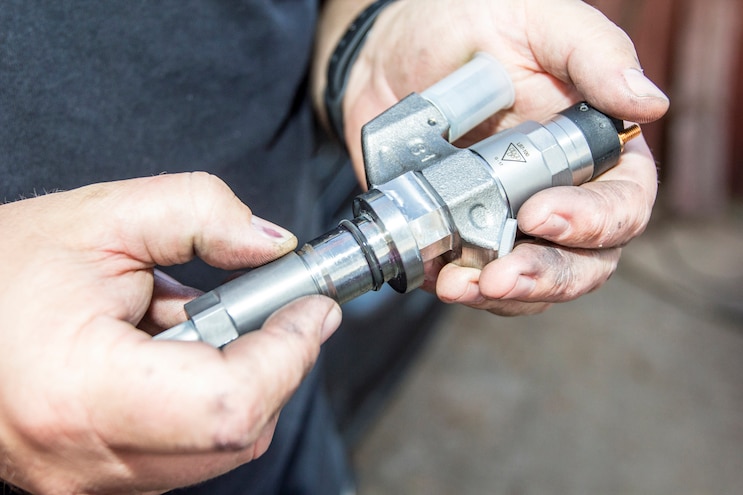 If you want to make your diesel go fast, there are only two things you need to make it happen: more air and more fuel. Of course, that’s entirely oversimplifying the situation, but you get the picture. No matter which diesel engine you have, the limiting factors are the same: the factory turbo can only flow so much air and stock injectors so much fuel. Once you’ve maxed those out, it’s time to upgrade.
Our LB7 Duramax already had the turbocharger improved by converting it to a Fleece “Cheetah,” and we’d upgraded our stock CP3 to a 42-percent-over unit from Industrial Injection. With a goal of putting 650 hp to the ground, stock injectors weren’t going to cut it. For this, we turned to the experts at Dynomite Diesel Products. Dynomite has been in business for nearly two decades and either builds, modifies, or services fuel injectors for practically all the modern diesel pickup engines, and even a few less-than-modern units. And if you frequent the diesel drag race or sled pull scenes, you’ll recognize their products as powering some of the fastest and most powerful pickups on the circuit.
Diesel injectors are rated two ways: in horsepower-over-stock and percentage of flow over stock. To allow a little wiggle room for future improvements, we opted for Dynomite’s 100hp injector set, which flows 45 percent more fuel than factory. Dynomite claims these will support up to 750 rear-wheel horsepower, and we should see up to a 1-mpg increase in fuel economy as well.
Installation is straightforward and follows any normal injector service protocol. A pyrometer is recommended to keep tabs on exhaust gas temperature with any injector with a flow rate greater than factory. While small nozzle upgrades can be made with no adjustment to tuning, at the level we’re running, it’s suggested that aftermarket tuning be employed.

View Photo Gallery | 31 Photos
Photo 2/31   |   LB7 injectors are known as the most troublesome of all Duramax injectors. Fortunately, throughout its years of service, Bosch continually improved the design of the LB7’s fuel injectors. And when combined with the knowledge the aftermarket has accumulated, what we’re left with is a unit that is far more reliable today than when first introduced. Still, even the best LB7 injectors are said to need servicing after about 100,000 miles. 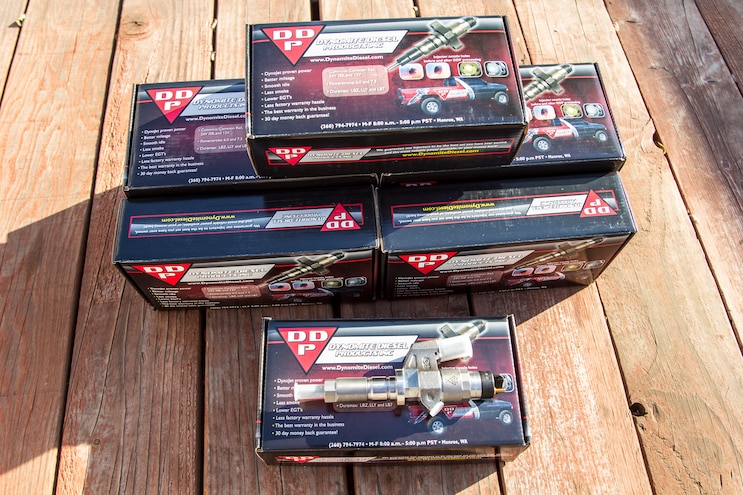 View Photo Gallery | 31 Photos
Photo 3/31   |   What was delivered from Dynomite Diesel Products was nothing short of beautiful. Like kids on Christmas, we enjoyed opening each and every one of the individual boxes, even though we knew what was inside.

View Photo Gallery | 31 Photos
Photo 4/31   |   There’s no mistaking a DDP injector. The company’s logo is laser-etched into the body. 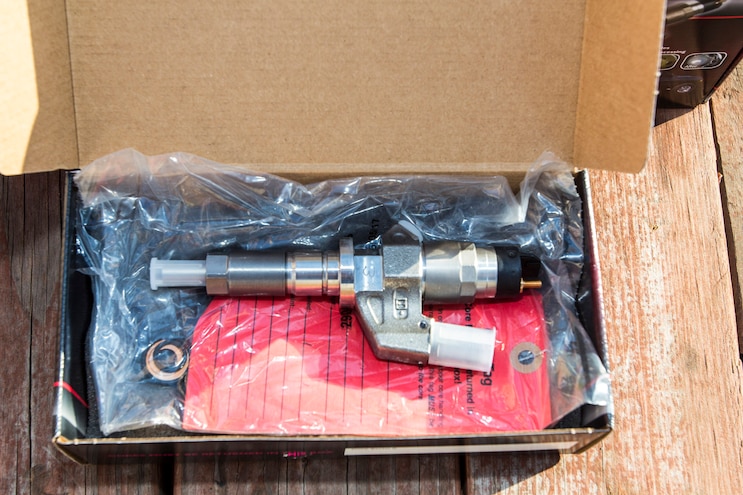 View Photo Gallery | 31 Photos
Photo 5/31   |   Inside the box is everything needed to install the new injectors. They come with two O-rings, a copper washer, and a return tag for your old core. 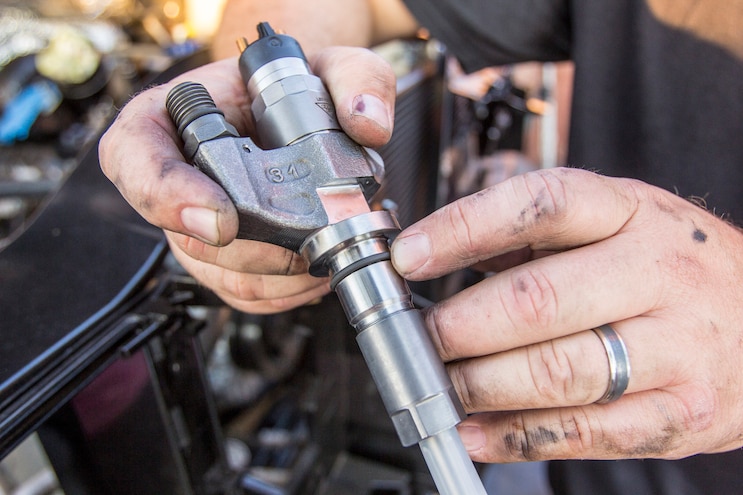 View Photo Gallery | 31 Photos
Photo 6/31   |   It’s important to remember to install the two O-rings. One goes on the injector body and the other on the high-pressure fuel inlet. You’ll want to lube the body O-ring with clean oil before dropping it into the cup. 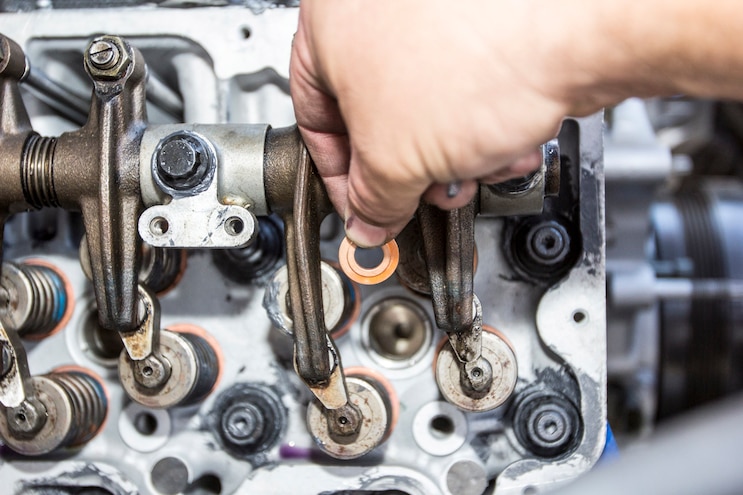 View Photo Gallery | 31 Photos
Photo 8/31   |   Also critically important is the copper washer that sits between the injector cup and nozzle. Carefully drop the washer into the bore and ensure it is sitting flat at the bottom before proceeding. 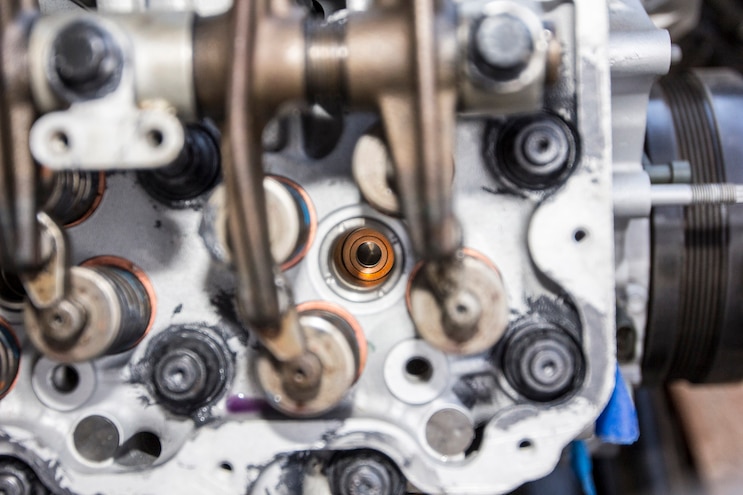 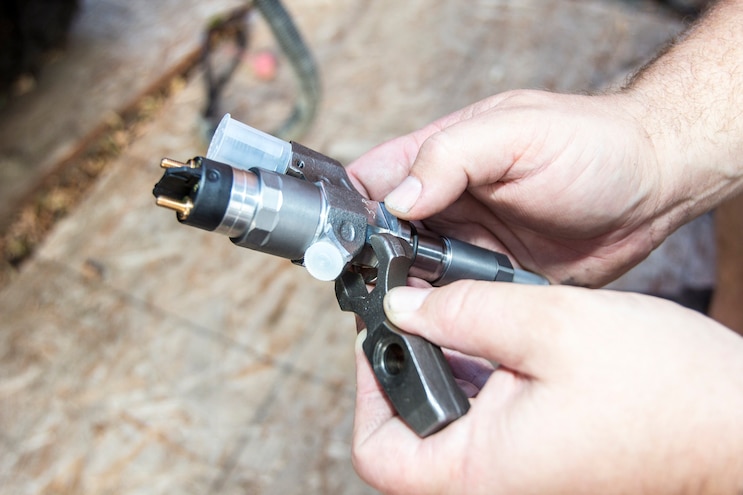 View Photo Gallery | 31 Photos
Photo 10/31   |   The injector hold-down serves the purpose of both locating the injector in the cup and keeping it in place. Make sure these are aligned properly, as they only go one way. View Photo Gallery | 31 Photos
Photo 11/31   |   Next, carefully align the injector with the cup and lower it down into the bore. It’ll take a little pressure to get the O-ring seated, and you’ll feel the positive engagement when it happens. There are specialty tools available to aid in holding both the injector and hold-down clamp, however, we found it easy enough to do without. 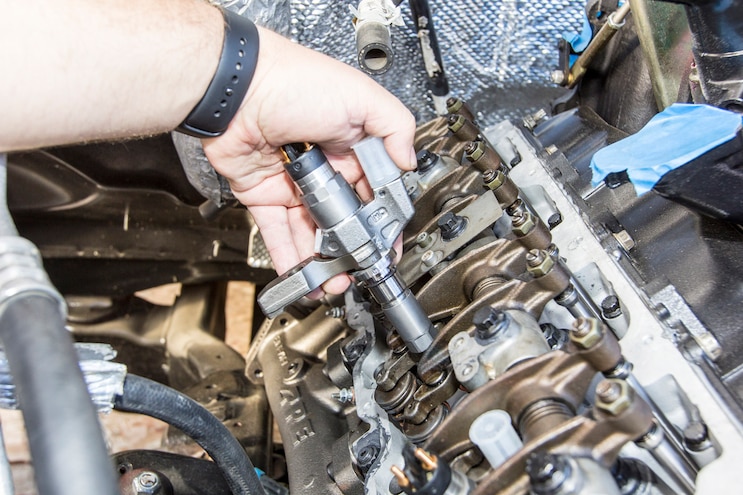 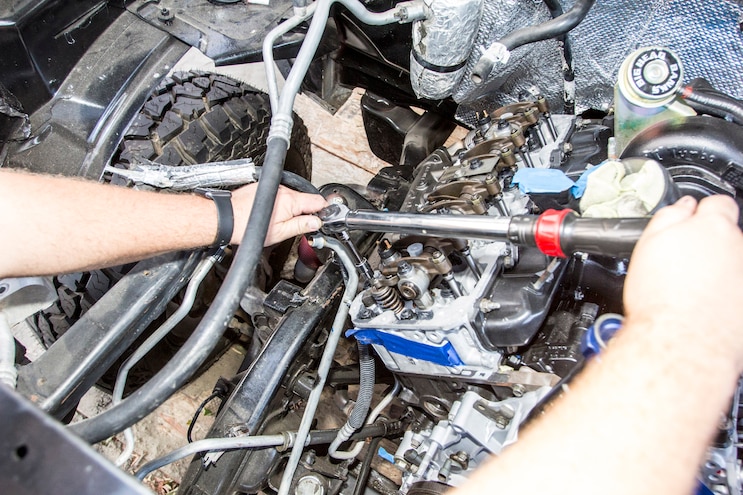 View Photo Gallery | 31 Photos
Photo 13/31   |   With one bank of injectors installed, we proceeded to torque the brackets to the required 37 ft-lb. It’s important to torque these bolts properly, as too little torque can cause the bolt to back out and the injector to come loose from the cup—and too much can damage the aluminum head. 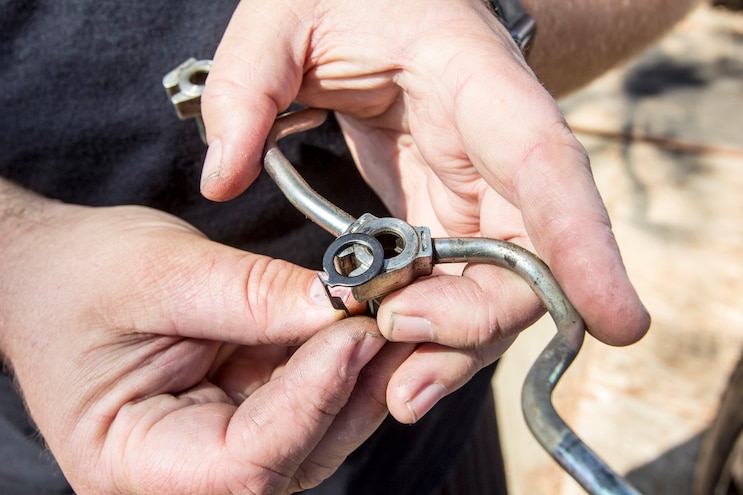 View Photo Gallery | 31 Photos
Photo 14/31   |   After installing the injectors, the return lines can go on. The fuel returns use a banjo bolt that threads into the injector body and special washers to keep them sealed. We replaced these washers with new units from Merchant Automotive. 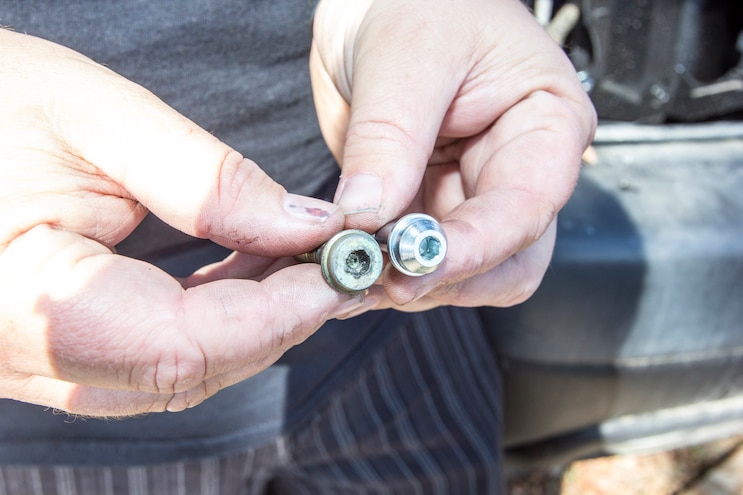 View Photo Gallery | 31 Photos
Photo 15/31   |   Another failure point is the banjo bolt itself. The factory bolts (left) have a shallow head and are known to strip after even just one use. Merchant Automotive offers replacement bolts (right) with significantly deeper heads, allowing the 5mm Allen wrench enough purchase to not immediately destroy the bolt. 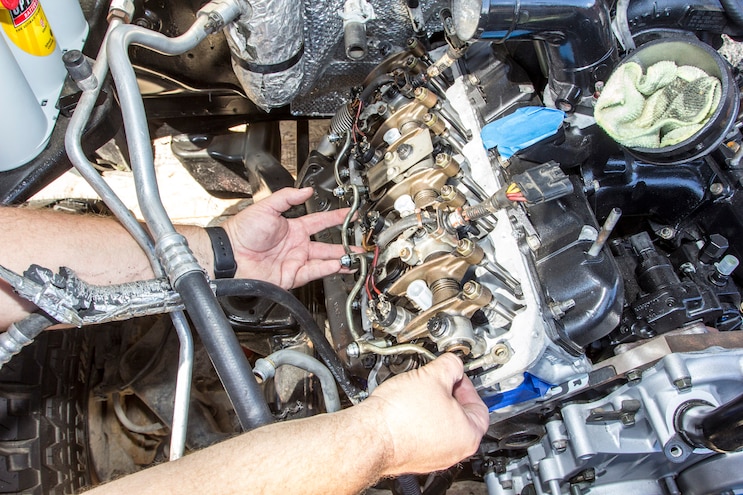 View Photo Gallery | 31 Photos
Photo 16/31   |   We found it easiest to install all four bolt and washer sets before lowering the return line into place. 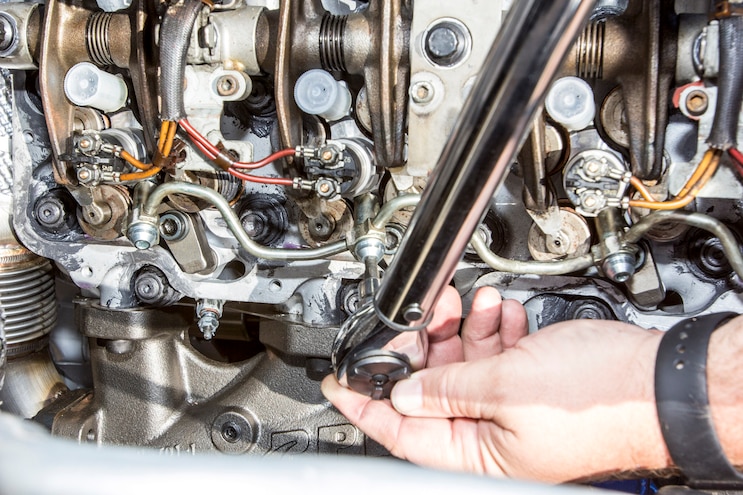 View Photo Gallery | 31 Photos
Photo 17/31   |   The return bolts are torqued to 12 ft-lb—no more, no less. A good 3/8-inch-drive 5mm Allen socket pays dividends when working on a Duramax engine, as a lot of factory bolts utilize that size fastener. 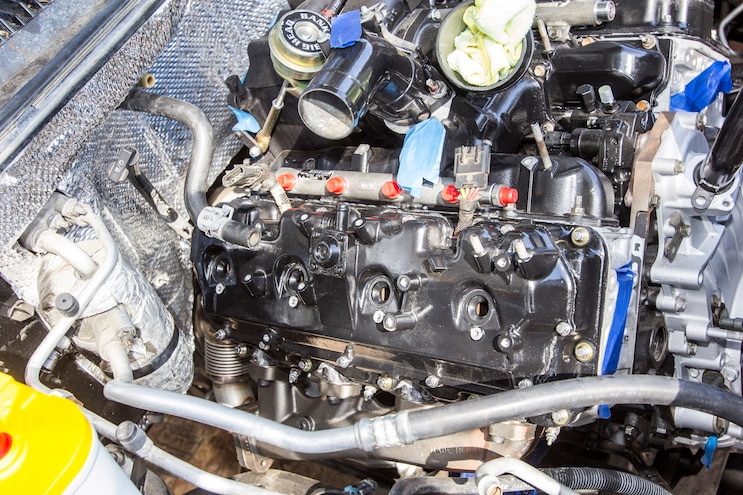 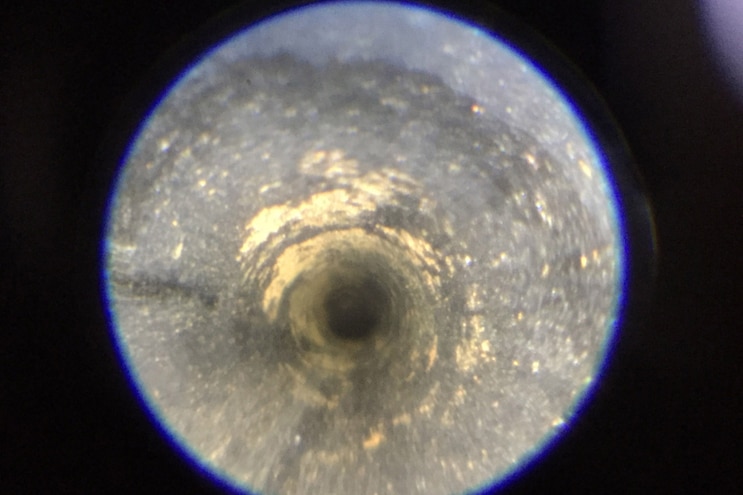 View Photo Gallery | 31 Photos
Photo 19/31   |   Another issue that plagues LB7 engines more than any other is corrosion inside the high-pressure fuel lines. Often impossible to see with the naked eye, this decay is caused largely by water and other impurities in diesel fuel. Using a bore scope, we’re able to see just how bad the inside of our factory lines was. If any of these particles were to come free, it could easily clog the small orifices within the injector, leading to poor performance and costly repairs. 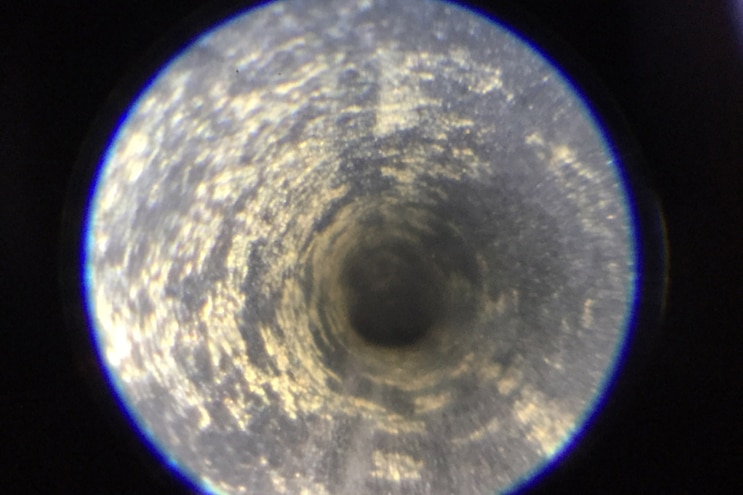 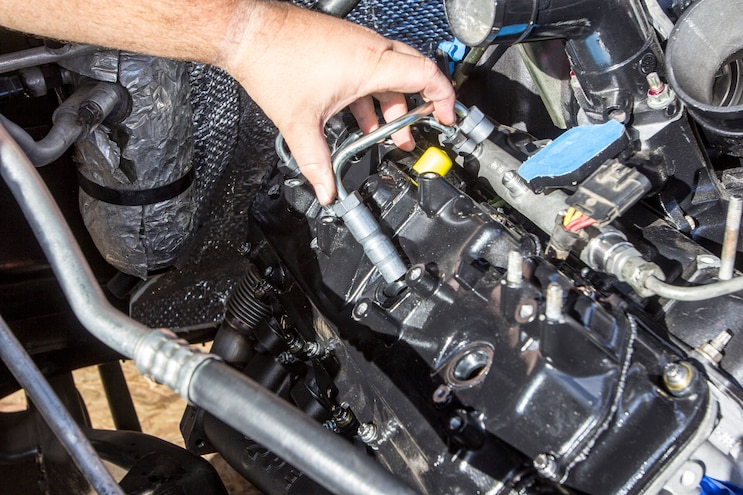 View Photo Gallery | 31 Photos
Photo 21/31   |   Fortunately for us, Dynomite also offers replacement high-pressure lines. These lines are brand-new. They are not refurbished old lines or cheap knockoffs (which do exist on sites like eBay). It’s imperative to get quality lines from a reputable source, since the knockoffs oftentimes cause more problems than the old dirty lines would have. It’s universally recommended to replace these high-pressure lines whenever the injectors are removed. 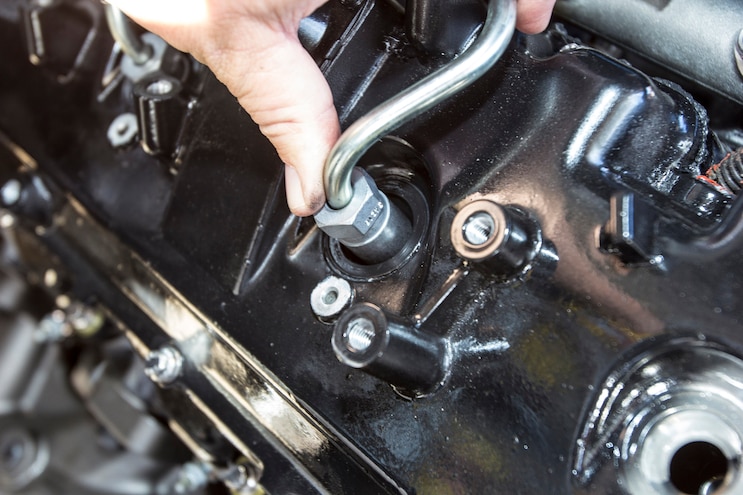 View Photo Gallery | 31 Photos
Photo 22/31   |   The high-pressure fuel lines slip through a grommet in the upper valve cover and onto the injector. Each line is specific to a cylinder, so if it doesn’t fit, don’t force it. Stop and find the correct one. We also chose to replace the valve cover grommets at this time, ensuring many years of leak-free operation. 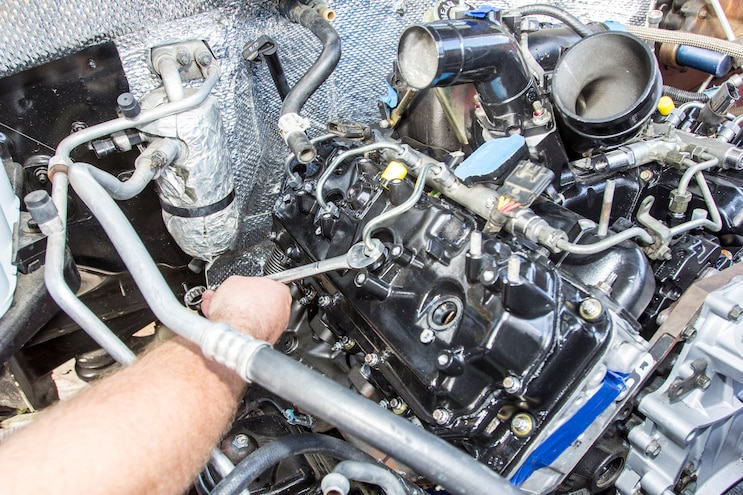 View Photo Gallery | 31 Photos
Photo 23/31   |   Tightening is handled by a ¾-inch open-end or pipe-nut wrench. These nuts should be tightened firmly, but not so much as to damage the injector or fuel rail. The official torque spec is 30 ft-lb. 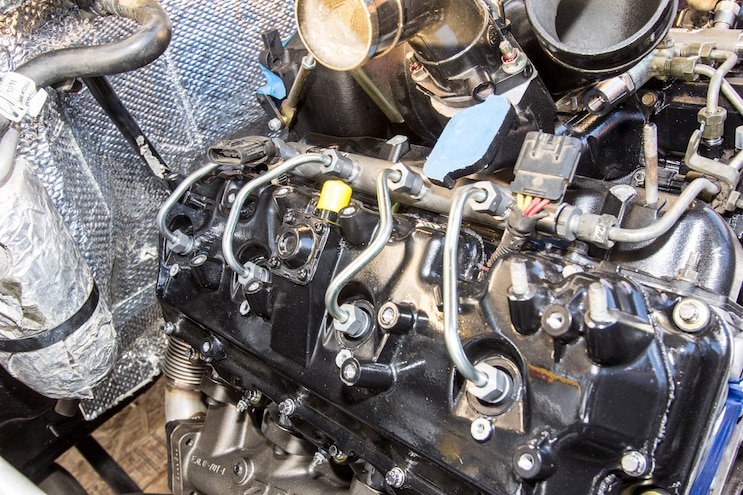 View Photo Gallery | 31 Photos
Photo 24/31   |   With all four high-pressure lines in place, the final step is to install the retaining clips. The operation is repeated on the other bank.
Inside the Dynomite Injector
LB7 Duramax injectors are largely throwaway items. Very few people rebuild them, simply because the cost of a new body is less than the effort of rebuilding it. Performance increases are handled by way of the nozzle and needle. Dynomite sets itself apart from the competition via the way it enlarges the nozzle orifices. There are two common methods of creating the microscopic holes needed to inject high-pressure diesel. The first is electro discharge machining (EDM). EDM is a process by which an electrically charged wire burns a hole through metal. The second is Extrude-Honing, during which a small abrasive is used to create or enlarge a hole.
Most factory nozzles are created using the EDM process. However, the companies that build injectors for the OEMs use highly advanced machines that are able to control the angle and speed of the wire insertion precisely. These manufacturers also use a process called abrasive flow machining (AFM) to clean up any imperfections left by the EDM process and to balance flow rate. When aftermarket companies use EDM to enlarge injector nozzles, they rarely go to the trouble of abrasive flow machining afterward and typically have older and less advanced equipment.
The team at Dynomite does it differently. They start out with an OEM nozzle, or a nozzle that’s been machined to their specifications, and then use an Extrude-Hone to enlarge the orifices. They then polish the inside of the nozzle and radius the inside of the holes. This provides for better atomization of the fuel, which results in less smoke, less heat, and ultimately, more power. Each nozzle is individually honed and then each injector set is balanced to within a 1-liter-per-minute variance from the highest to the lowest flowing. By comparison, factory injectors are often considered acceptable if the flow rate is within 2 to 3 liters per minute.
All of this combines to create an injector that provides impeccable power and reliability while also running clean and smooth. 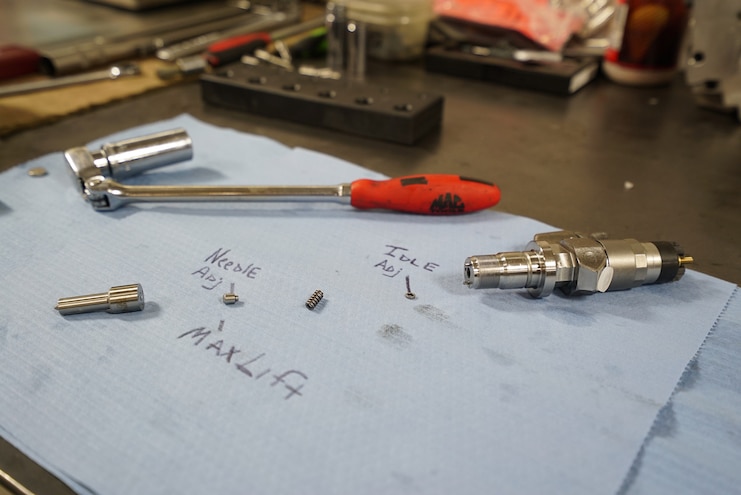 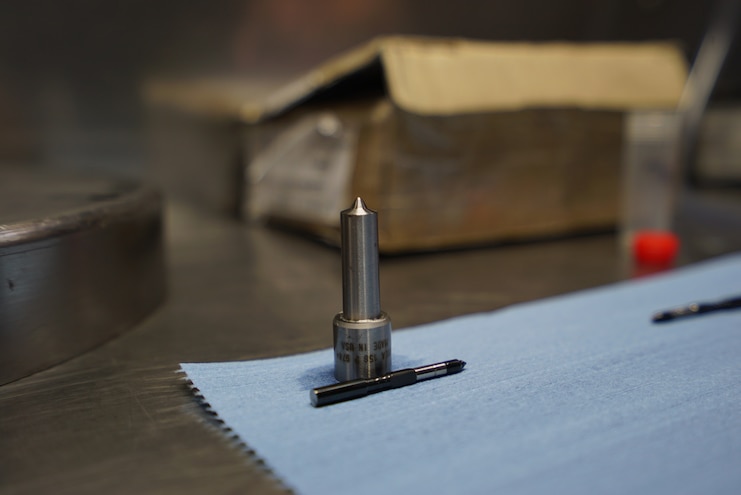 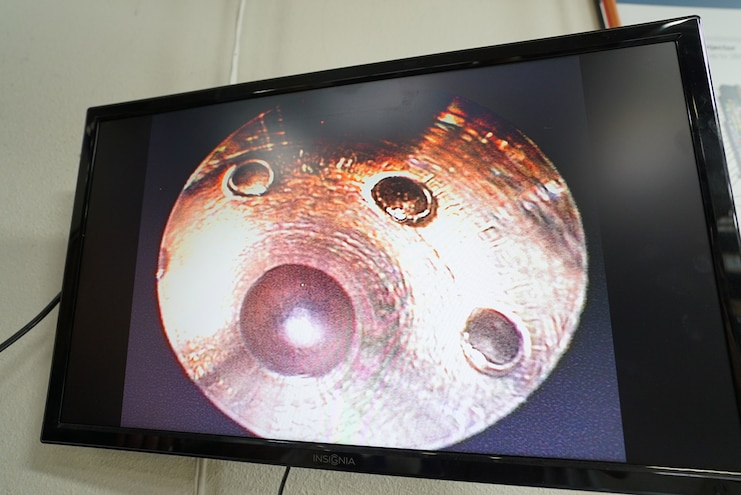 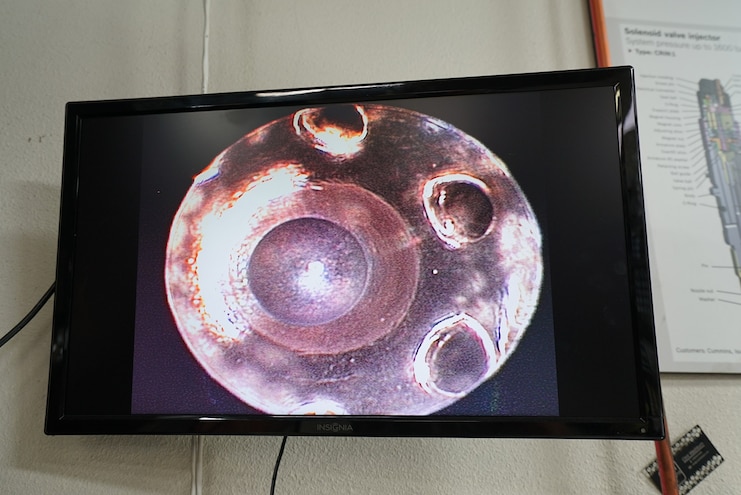 View Photo Gallery | 31 Photos
Photo 28/31   |   And here is the “after” shot. Note the radiuses on the orifice edges and the polish to the nozzle bore.
What Is a “Race Valve”?
There’s a phrase that gets thrown around a lot when talking about Duramax fuel systems. What people call a race valve is simply a plug that takes the place of the high-pressure relief valve. On our LB7, it’s located on the fuel distribution block in the valley, however, on later engines it can be found on one of the high-pressure rails. The theory goes that under heavy load, with hot tunes, or larger injectors, the relief valve can bleed off too much pressure, causing a drop in performance. To alleviate the problem, companies such as PPE sell a plug that replaces the relief valve entirely. Pretty simple in theory.
LB7s have less of an issue with the fuel pressure relief valve than other Duramaxes, but we still didn’t want to chance a degradation in performance. With the engine apart, it literally took minutes to install PPE’s race valve on our fuel system. With all the accessories in place, plan for half a day, a few thrown tools, and a pile of swear words.
While the Internet has mixed opinions of race valves, most are in favor of them. The biggest issue is the possibility of overpressurization. This is caused more by poor or aggressive tuning rather than by the mechanical bits. We’re confident it was the right choice and will complement our fueling setup well. 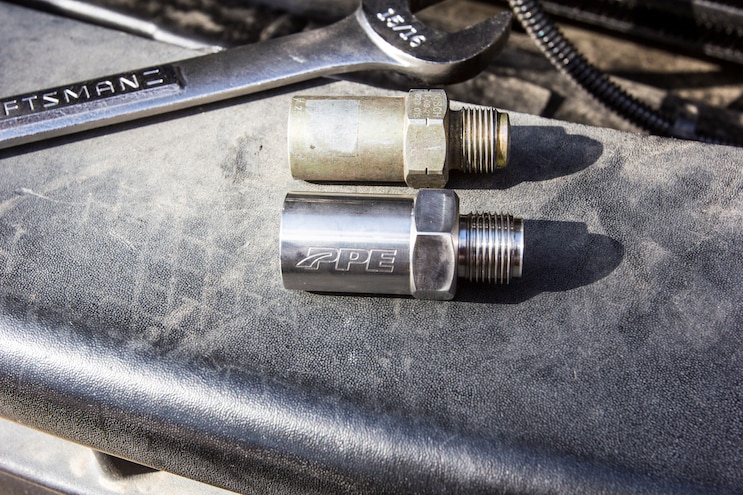 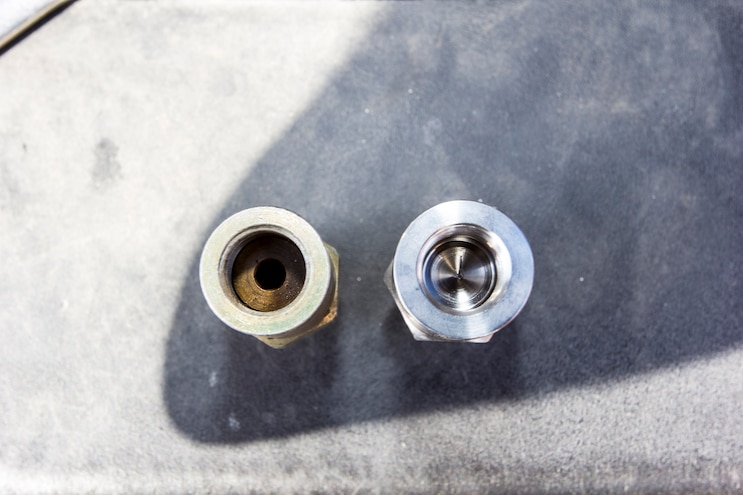 View Photo Gallery | 31 Photos
Photo 30/31   |   Notice the PPE race valve (right) is a solid piece of machined stainless steel, while the factory fuel pressure relief valve (left) has a hole in the middle leading to the spring-loaded valve within. 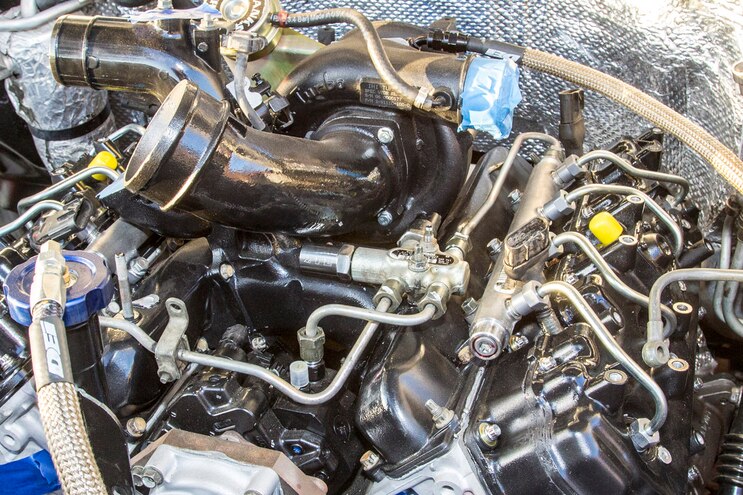 View Photo Gallery | 31 Photos
Photo 31/31   |   On LB7 engines, the fuel pressure relief valve is located on the fuel distribution block mounted to the driver-side intake manifold. LLY, LBZ, and LMM engines (along with 6.7L Cummins engines) have the valve located within the fuel rail. None of which are particularly easy to access.