High-Output Alternators Save the Day 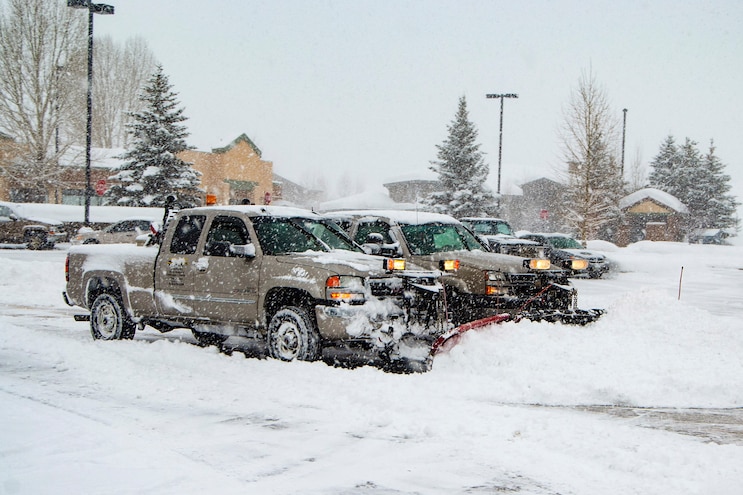 It doesn’t matter whether it’s in the deep chill of winter or the heat of summer, on a work truck, emergency vehicle, or personal rig—the last thing a driver wants to see or hear are dim headlights and the clickity-clickity-click sound of a dead battery.
All too often that’s the case when diesel-pickup owners run the heat or air-conditioning at full blast, with a raft of auxiliary lights shining brightly…while doing things like slowly plowing deep snow through the night.
Depleting a battery’s charge due to a stock alternator’s inability to support the demand for power isn’t of much concern for most diesel owners, because the unit generally provides enough amps to handle normal demands.
“What many truck owners forget about alternators is their purpose is to support a fully charged battery or batteries under increased electrical loads—not to charge up completely dead or dying batteries,” says Matthew Logan of Mechman Alternators.

Electrical accessories such as power inverters, winches, business radios, snowplows, emergency lights, onboard air compressors, trailer battery chargers, and similar auxiliary components place a big electrical load on the charging system.
Combine their amp draw with the normal amount of juice needed to run a later-model diesel pickup—which can be as much as 90 to 95 amps (computer systems, injection pumps, lift pumps, HVAC, lights, stereo, and other factory components)—and it’s easy to overpower the typical output of the stock 140- or 180-amp alternator.
Enthusiasts who know their work and recreational needs are going to place a high demand on the electrical system typically order the dual-alternator option when they purchase a truck. The $300 to $400 investment is a small price to pay for doubling amp output.
Those who later realize their truck’s single alternator isn’t cutting it have only one alternative: upgrade. There are many aftermarket manufacturers that specialize in high-output alternators and dual-alternator kits. 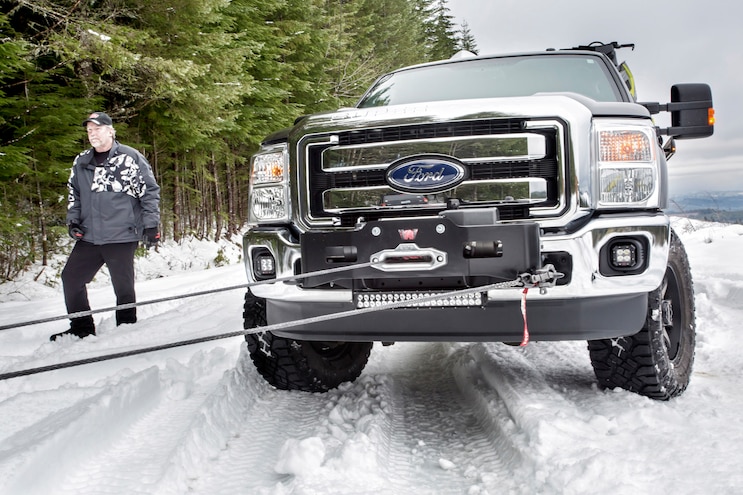 View Photo Gallery | 16 Photos
Photo 3/16   |   Heavy-duty electric winches put the biggest hit on batteries. The larger winches used on heavy-duty pickups, such as Warn Industries’ 16.5ti Thermometric Self-Recovery unit, draw more than 500 amps under full pull. Even smaller-capacity winches will easily outpace the rate at which a single alternator can feed the batteries.

The term “high-output” for alternators simply means the new, rebuilt, or rewound unit is capable of producing more amps across the board than a stock unit. In the realm of diesel pickups, a high-output alternator produces more than three times the amp output of a stock alternator.
Speaking of output ratings, make sure you’re comparing apples to apples. The sure way to compare alternator performance is if the alternator manufacturer’s ratings are done using international testing standards: ISO 8854 or SAE J56. Such test standards verify how much an alternator can produce at 6,000 rpm (alternator shaft speed) under controlled bench-test conditions at a temperature of 70 to 75 degrees Fahrenheit and voltage at 13.5 volts. Any other alternator “testing” or “rating” should prompt a few more questions toward the supplier about testing methods.
An SAE J56-certified test also provides ratings for “idle output” at 1,500 rpm and “maximum rated speed” output. The resulting numbers are stamped on the alternator. For example, an alternator that has an SAE J56 rating of “150/300 13.5V” made 150 amps at 1,500-rpm alternator shaft speed and 300 amps at 6,000 rpm, at a test voltage of 13.5 volts. 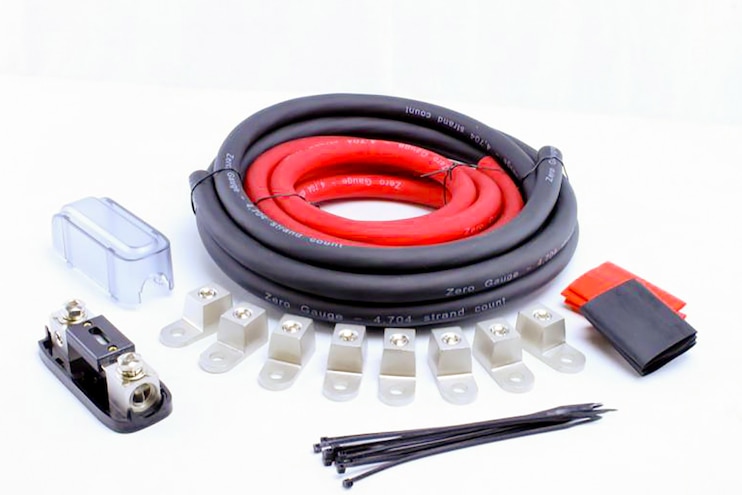 When shopping for a new alternator, there are some components inside the case that typically mean the difference between one of standard OEM build quality and one custom-built for handling high-amp draw in demanding diesel situations.
An alternator consists of a rotor turning inside coils on the inside of a case, called the stator. But Dave Walters at Mean Green Alternators explains a little deeper: “Copper wire must be magnetic grade, and the stator-slot insulation needs to be good for 200 degrees Celsius for high-output alternators, especially those used in diesel-powered vehicles, because of higher underhood temperature than a gas-powered pickup.”
An alternator generates a lot of heat as it produces amperage until auxiliary or weaker batteries are charged. Batteries don’t like excessive heat. The higher the ambient temperature of a battery, the less charging voltage and amperage it can take before it starts boiling the electrolytes inside.
A tightly wound, trapezoidal, hot-forged rotor is necessary for achieving higher amperage. “The rotor’s magnetic strength is determined by the amp draw multiplied by the number of turns in the coil,” Dave explains. “An even better low-engine rpm, high -output rotor is the permanent-magnet rotor, but it is more expensive to produce.” 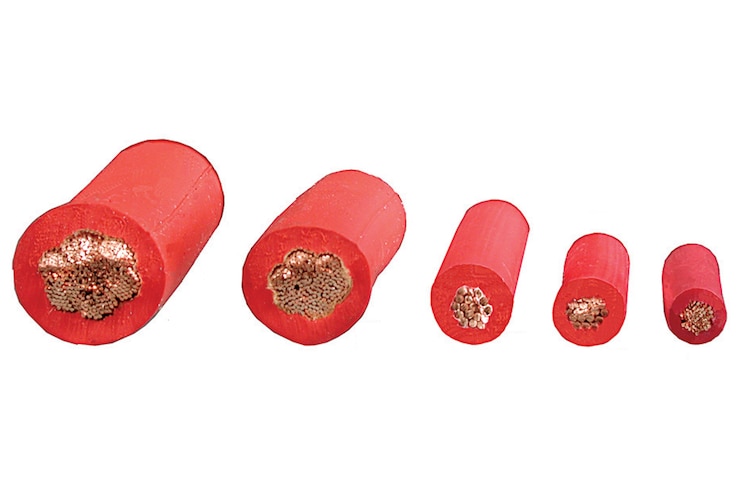 View Photo Gallery | 16 Photos
Photo 5/16   |   The charge wire is very important, and its length and gauge must be scrutinized. Powermaster Motorsports’ Todd Ryden says, “As current requirements to support the demands of accessories and added electrical components grow, the gauge of the charge wire needs to fatten up to support the output of a larger alternator.” “One-aught,” or 1/0 wire (far left), is ideal for the charge wire on alternators producing more than 250 amps.

Upgrading to a higher-output alternator requires replacing the power and ground cables to the battery with heavier-gauge cable to accommodate the higher amp flow. In most diesel applications, this means running 1/0 AWG flexible copper (4,704 strands) or 2/0 CCA (copper-clad aluminum) cable on alternators producing more than 240 amps. It’s also prudent to replace the drive belt and clean or replace all the terminal ends.
“Providing a ground from the alternator housing directly to the engine block or battery ground is becoming a necessity with higher outputs,” says Powermaster’s Todd Ryden. He also suggests replacing ground straps if the pickup is more than a decade old, including chassis and body/firewall grounds. If the batteries are more than five years old, they should also be replaced.
Todd also says powdercoated and anodized aluminum brackets, which are becoming very popular, sometimes do not provide an adequate ground. That’s why all grounding surfaces need to be clean and the metal bare, ring terminals need to tightly fit the bolts or fasteners, and star washers need to be used instead of lock washers for best contact. Taking these steps will maximize the circular current flow and help reduce the work the alternator has to do to keep the batteries charged.
If your truck is in need of being amped up, we’ve listed a few of the premium high-output alternators to help speed up your search. Stepping up to any of these will be a big boost and keep your truck’s batteries topped off under demanding conditions. 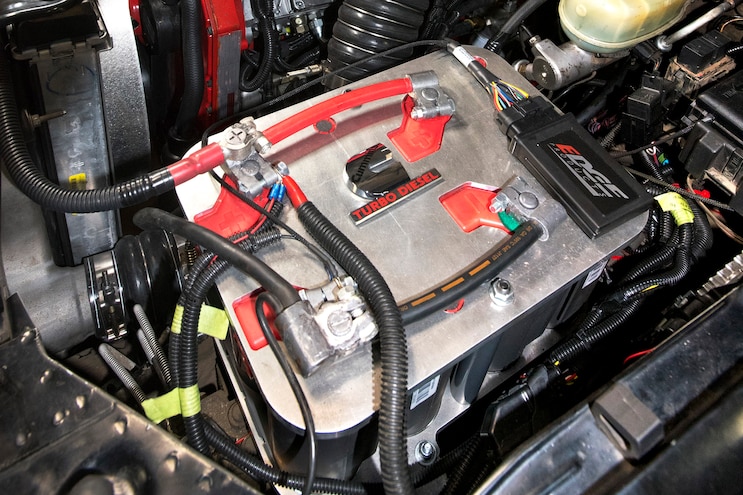 View Photo Gallery | 16 Photos
Photo 6/16   |   Running a high-output alternator (or dual alternators) does little good if the cabling and connections between the alternator and the batteries is improperly done. New batteries and fine-strand cables of the correct gauge are critical to maximizing alternator performance. 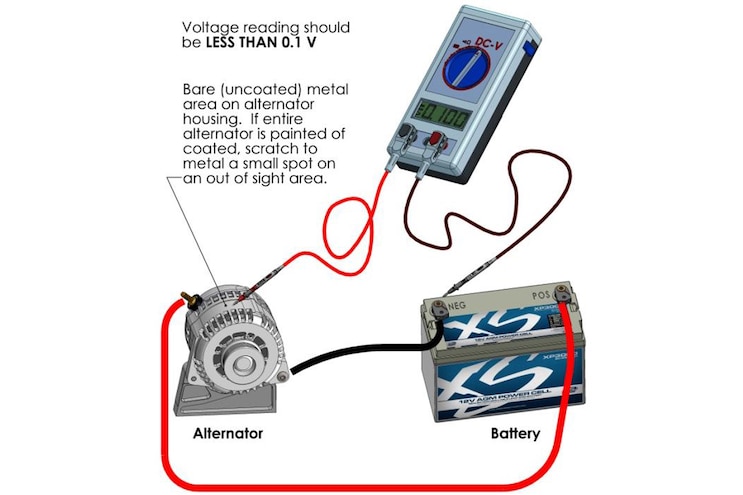 View Photo Gallery | 16 Photos
Photo 7/16   |   After installing a high-output alternator, Mechman techs recommend doing a “charge-path test” of both the ground and power circuits. Voltage measurements on both tests should show less than 0.1 volt. If the reading is higher, there’s a problem with the integrity of ground and/or power connections. (Illustration courtesy of Mechman Alternators) 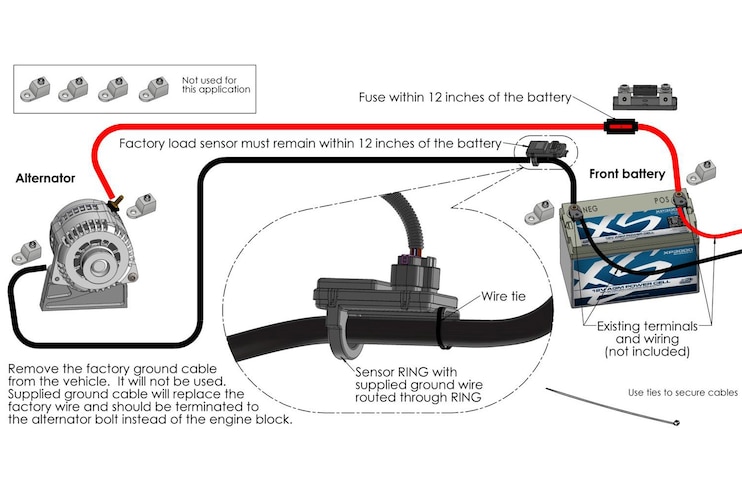 View Photo Gallery | 16 Photos
Photo 8/16   |   GM uses special inductive load sensors attached to the ground cables between the alternator and batteries. The ring-type sensors must be reinstalled on the heavier-gauge battery cable when upgrading to a higher-output alternator, as this Mechman illustration shows. 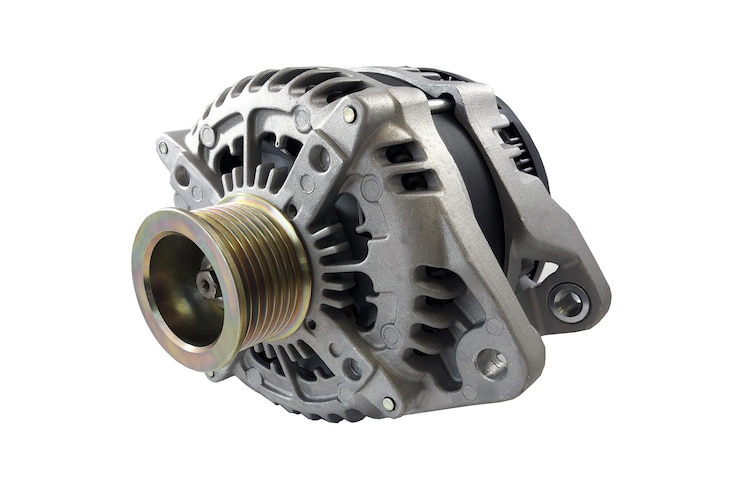 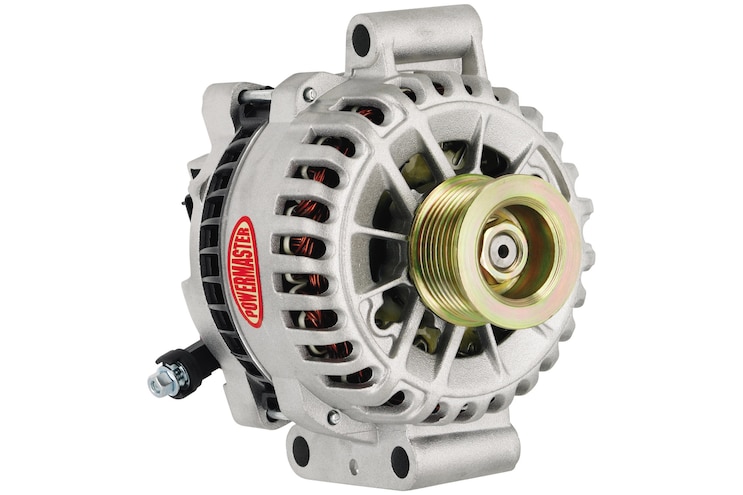 View Photo Gallery | 16 Photos
Photo 10/16   |   Powermaster’s 48787 alternator is a direct bolt-in upgrade for Ford’s older 7.3L Power Stroke engine. It produces 130 amps at idle and 200 at the top end. Powermaster, which offers high-output alternators for a wide range of vehicles, dyno-tests every alternator at its West Chicago, Illinois, manufacturing plant. 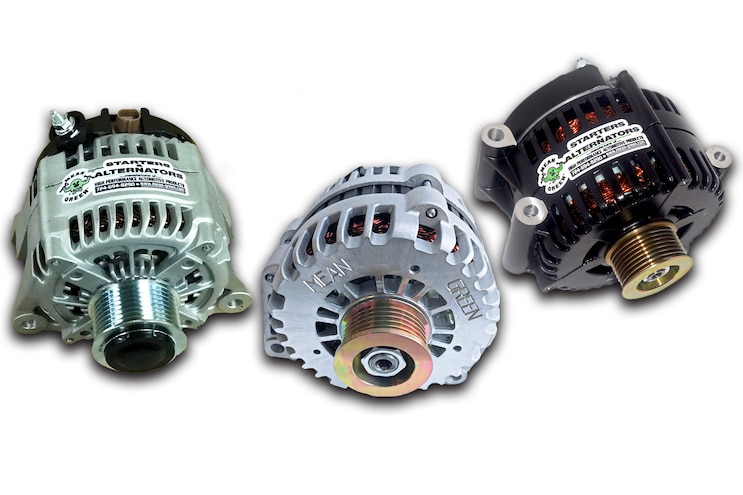 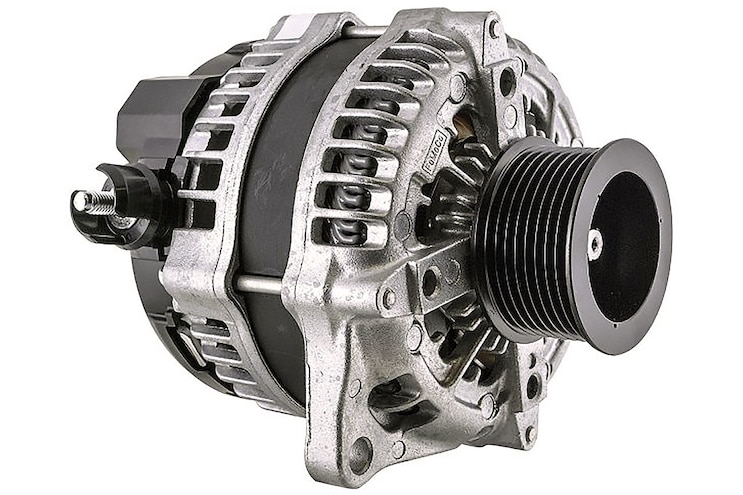 View Photo Gallery | 16 Photos
Photo 12/16   |   This exact-fit, high-output alternator from PowerBastards is designed specifically for ’11-to-’16 Ford diesels. It is said to deliver 150 amps at idle and 300-plus amps at full output. The brand-new unit uses the same mounts and electrical connections as the stock alternator. 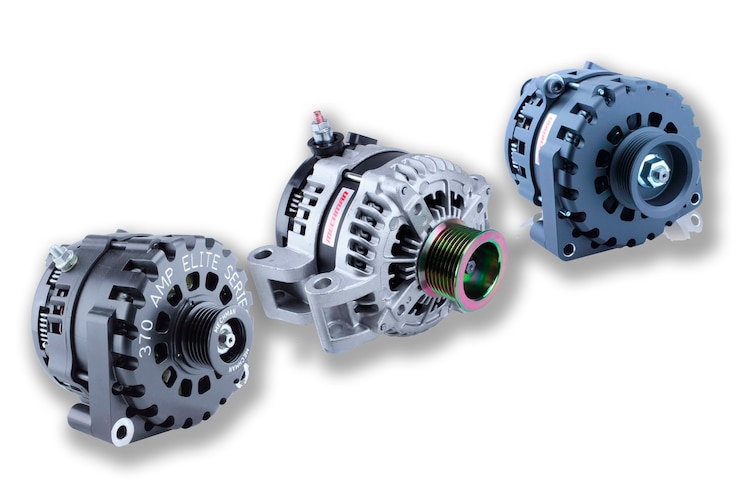 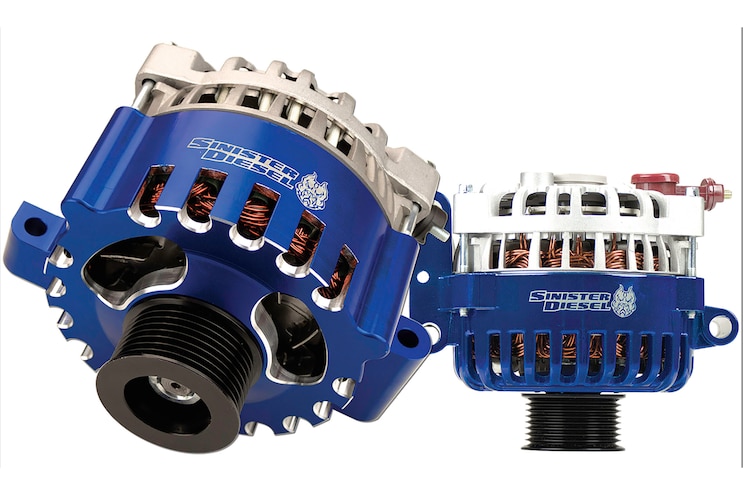 View Photo Gallery | 16 Photos
Photo 14/16   |   Sinister Diesel high-output alternators for late-model Ford Power Stroke, Cummins, and Duramax engines are available with up to 250 amps of output in some applications, featuring an upgraded high-amperage regulator, stator, and high-temp bearings (select models). All are available with either a powdercoated or anodized Sinister Blue billet cover. 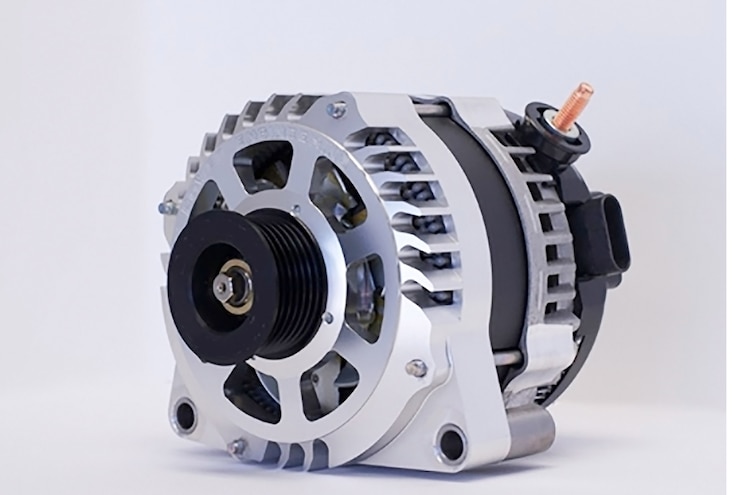 If you don’t need more amp output but want more amps available at idle and low engine rpm, the easy upgrade is swapping the factory pulley for a smaller-diameter “power” pulley. Installing a smaller-diameter pulley on the alternator shaft speeds up the rpm of the armature so more amps are produced at that engine rpm. A higher alternator speed also helps its internals cool better under load because its cooling fan is spinning faster. (The typical “high-output” aftermarket alternators utilize a power pulley.) 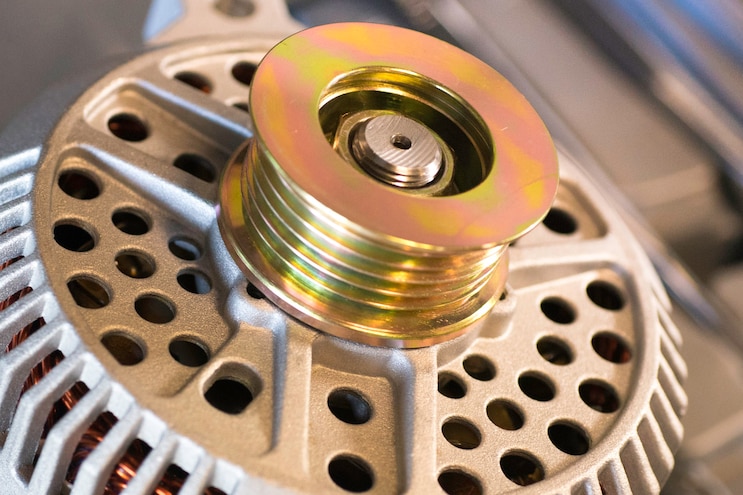 View Photo Gallery | 16 Photos
Photo 16/16   |   Sidebar Alterantor Power Pulley
Most Ford, Ram, and GM vehicles use alternator pulleys with diameters of 2¼-, 2 3/8-, 2½- or 2 7/16 inches. Replacing one of those with a 1 7/8 or 2-inch pulley increases the alternator’s shaft rpm for a given engine speed, thus increasing the output without needing to increase engine-idle rpm.
To determine the amperage output of your diesel’s alternator, divide the diameter of the crankshaft pulley by the diameter of the alternator pulley. Then multiply that number by engine rpm. For example, a 6-inch crank pulley with a 2-inch alternator pulley gives a 3:1 ratio. If the engine is idling at 800 rpm, the alternator shaft is spinning at 2,400 rpm, and at 1,800 engine rpm, the shaft is spinning at 5,400 rpm with that pulley combination.

Battery isolators on vehicles equipped with an auxiliary battery are very popular (they facilitate starting an engine using a rig’s primary battery, in the event the second cell is dead). However, installing an inline isolator isn’t a good idea with today’s diesel pickups.
“Depending on the design of the isolator, there can be as much as a 1-volt drop in charging voltage going through the isolator,” says Mechman Alternator’s Matthew Logan. “That small drop in voltage freaks out the RVC (GM) systems with inductive load sensors on the battery cables the computer uses to control the voltage regulator.”
Matthew also warns that using a battery isolator for the 6.7L Power Stroke and Cummins engines of Ford and Ram trucks should also be avoided because those ECM-controlled smart-charging systems operate at lower voltages under certain vehicle conditions to promote better fuel economy and component longevity. A battery isolator can also drop voltage below 13 volts and actually lead to the batteries being discharged.