Protecting the Rear of Our Silverado 2500HD 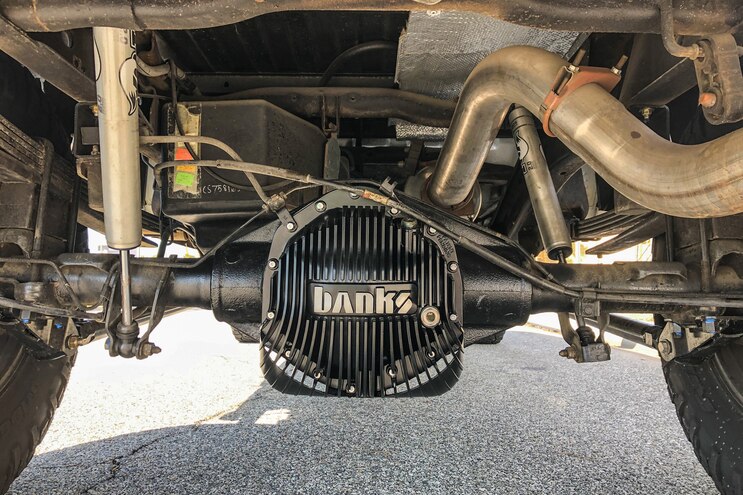 Unless you've still sporting a Motorola flip phone and relying on AOL dialup internet, you should be aware of both the existence of aftermarket differential covers and the YouTube video series from Gale Banks Engineering (aka Banks Power) regarding the negatives of the traditional flat-back aluminum covers. Not ringing a bell? Check out the links below before moving on.

Do Diff Covers Work or Are They Just Bling? Part 1 of 3

What's going on behind your stock diff cover?

What's going on behind your flat-back diff cover?

How to Engineer the PERFECT Differential Cover

With more than a year into research and development, and a patent from the US Patent and Trademark Office, the Banks diff cover is the real deal. And while Gale Banks makes some big claims in his videos, we're not in a position to confirm or deny any of them, so use your best judgement while watching the videos. 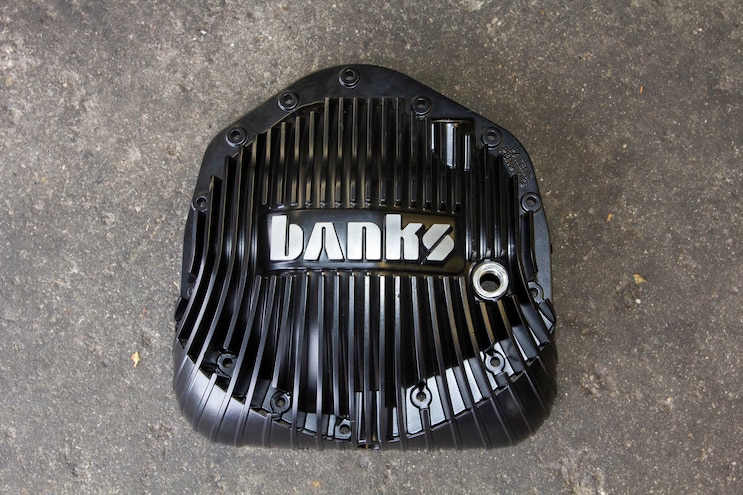 View Photo Gallery | 14 Photos
Photo 2/14   |   The team at Gale Banks Engineering (AKA Banks Power) spent more than a year designing the company's new differential cover. Gale was adamant that if the company were to take on the task that the cover would have to first be functional. Because of this, the cover incorporates special cooling fins and air ducts that direct cool air over the cover.

We did, however, want to see one of these new covers for ourselves. And let us tell you, they in high demand! It features: a curved back so that fluid flows more easily to the pinion and pinion bearings; air ducts that channel cool air to the fins on the back of the cover; and internal heatsink fins. There's a lot to love about the Banks cover. Fill and drain plugs have become standard fare on aftermarket covers, but Banks takes it a step further and adds a sight glass for easy fluid checks. Finishing off the package is a Viton O-ring seal and chrome 12-point fasteners.

To try out the cover for ourselves, we went over to the axle experts at South Bay Truck & 4x4, where Frank Gilliland had the new cover installed in no time. Mind you, we were there with our 2002 Chevrolet Silverado 2500HD for other gear work anyway. The Banks diff cover can be installed in your driveway with basic hand tools in about 30 minutes. 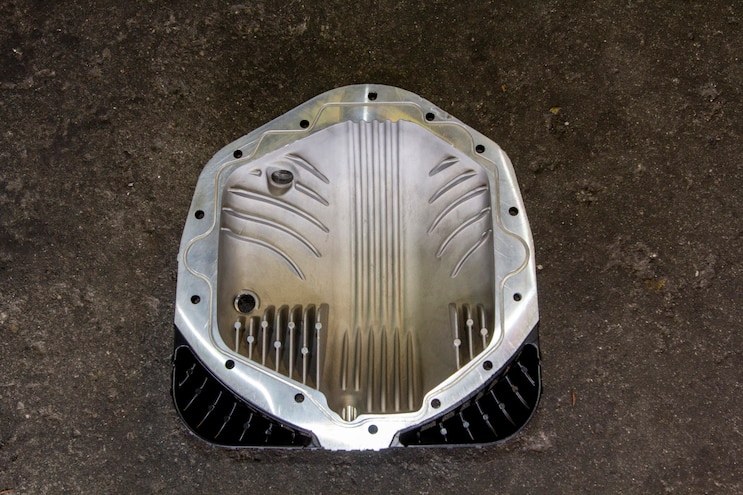 View Photo Gallery | 14 Photos
Photo 3/14   |   Inside the cover, you'll notice something quite different than most aftermarket differential covers the inside is curved. The vast majority of aftermarket high-capacity covers have a flat back, and it's this that Gale Banks takes issue with. Gale and his team found that a curved cover better directs fluid flow from the ring gear back to the pinion gear and bearings. 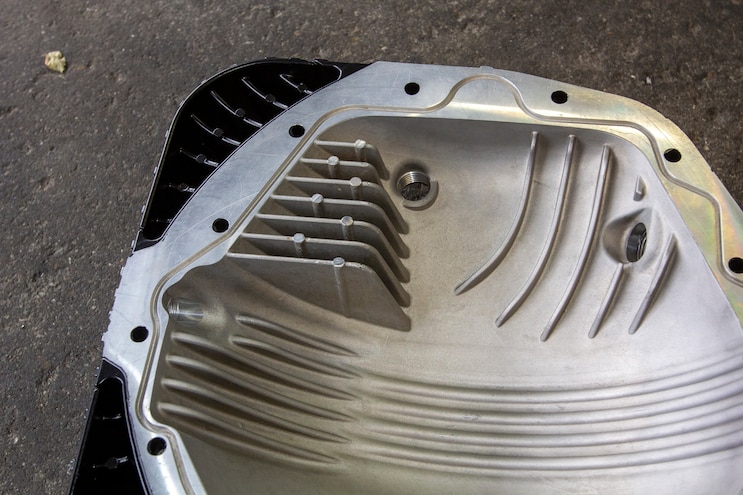 View Photo Gallery | 14 Photos
Photo 4/14   |   Also, inside you'll find large cooling fins. These internal fins act as heatsinks that work to transfer head from the fluid to the cooling fins on the outside of the cover. 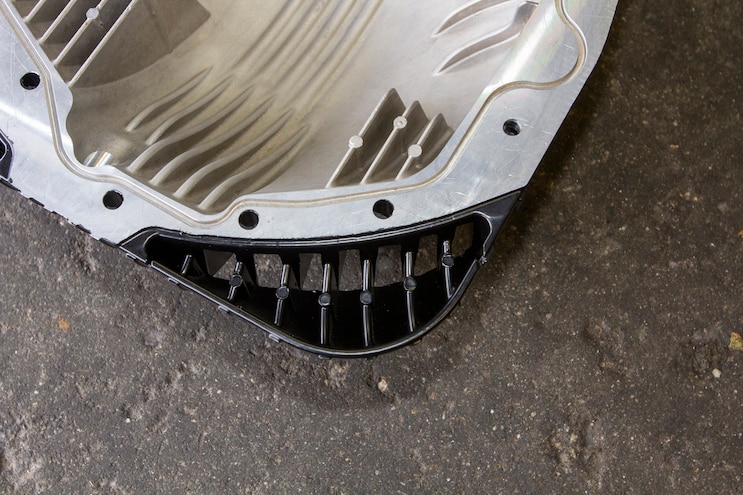 View Photo Gallery | 14 Photos
Photo 5/14   |   From the backside you can get a clear view of how the cooling air ducts work. By hanging below the differential, they are able to scoop air and direct it through the exterior cooling fins. Don't worry, Banks has designed these scoops to break off in the event of impact, say with a rock or road debris. This way the scoops will separate without compromising the cover's oil holding ability. 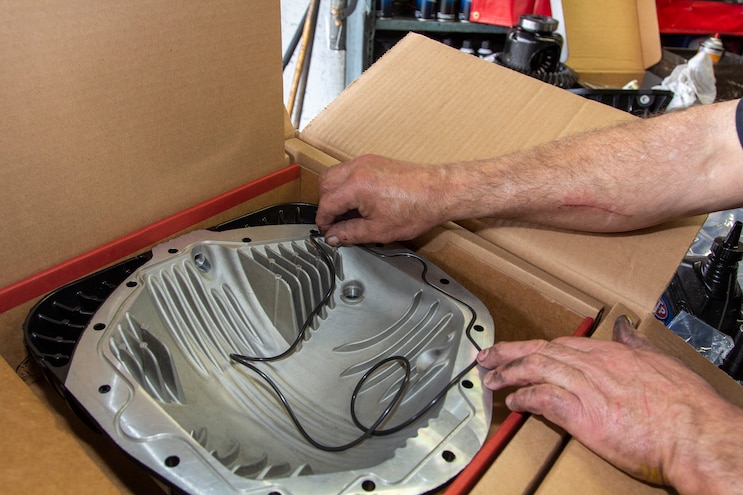 View Photo Gallery | 14 Photos
Photo 6/14   |   There are several ways to seal a differential cover. Traditionally, sealants such as RTV or silicon gasket makers have been used. Also common for some differentials, such as our GM Corporate 14-bolt (which shares a cover bolt pattern with the AAM 11.5 and 11.8-inch differentials), are paper gaskets. Banks takes a different approach, however, and machines each cover to accept a Viton O-ring seal. 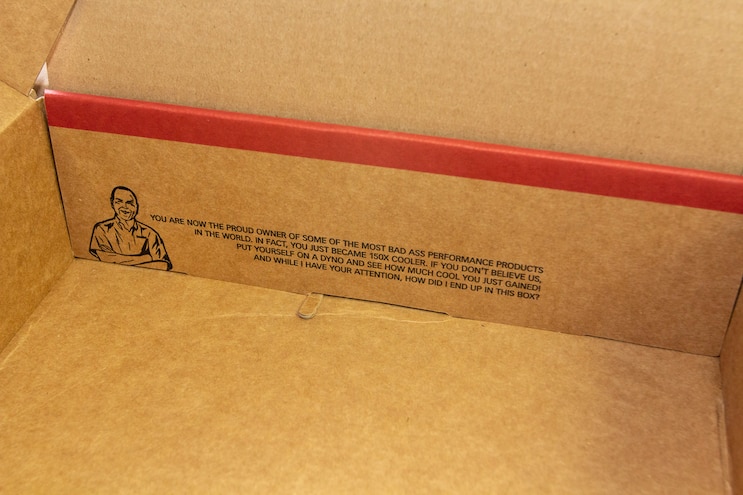 View Photo Gallery | 14 Photos
Photo 7/14   |   We rarely look inside the boxes that our parts come out of, however this one caught our eye pretty quick. Cartoon Gale certainly amused us. It's all about the little things, you know? 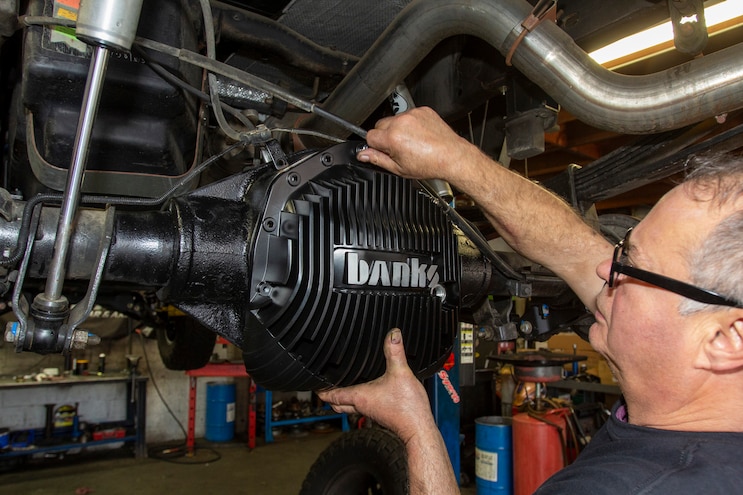 View Photo Gallery | 14 Photos
Photo 8/14   |   We won't go too deep into how to remove the old cover because it's a pretty simple operation. With the old cover off and the old gasket material cleaned from the mating surface, the new Banks cover can be installed. Banks provides custom chrome 12-point bolts to attach the new cover to the differential. 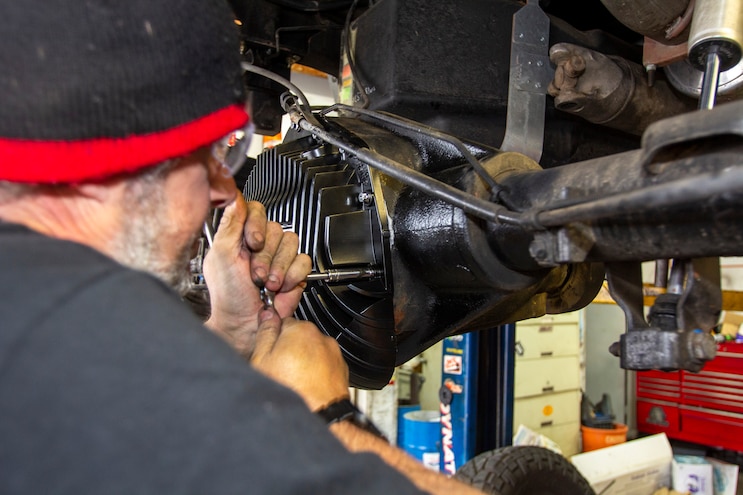 View Photo Gallery | 14 Photos
Photo 9/14   |   Once the 14 bolts that secure the cover have been started by hand, they can be tightened with a wrench. Avoid power tools, as these bolts are easy to strip or break. Banks provides a torque spec of 22 ft-lbs for the provided bolts. For reference the factory bolts torque to 35 ft-lbs. 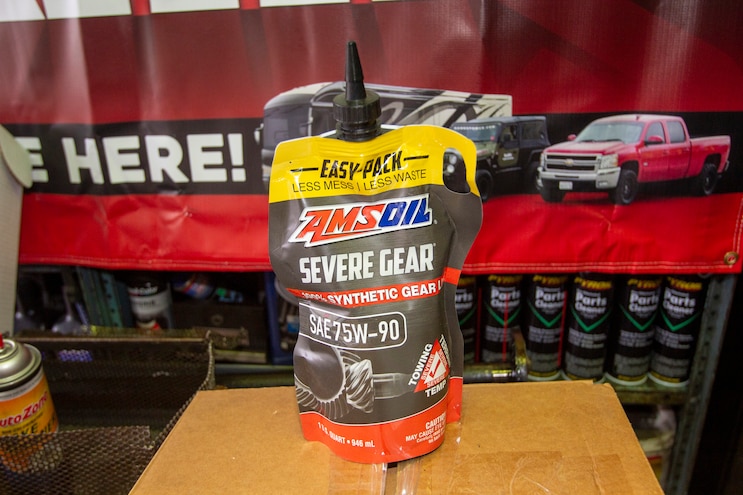 View Photo Gallery | 14 Photos
Photo 10/14   |   Banks recommends Amsoil for filling the differential after installing their cover. We've been fans of Amsoil for many years, so we didn't disagree. Amsoil's new Easy Pack lube sacks make for an easy job of filling many hard to reach components. 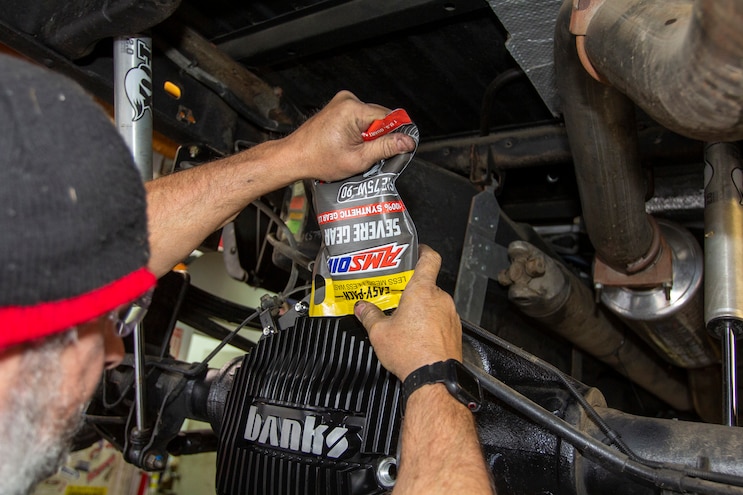 View Photo Gallery | 14 Photos
Photo 11/14   |   The crew at South Bay Truck & 4x4 squeezed about four quarts into the axle. It's worth noting that the Banks differential cover is not a "high-capacity" cover. In their testing, Banks engineers found the higher fluid capacities to not necessarily be an advantage. 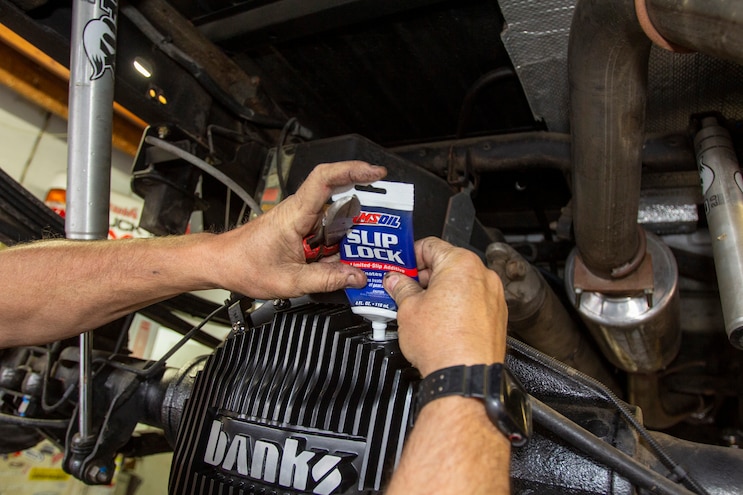 View Photo Gallery | 14 Photos
Photo 12/14   |   Because our truck is equipped with a Dura Grip limited-slip differential, we needed to add a friction modifier to the oil. This fluid works to minimize the chatter felt from the clutch packs inside the carrier. 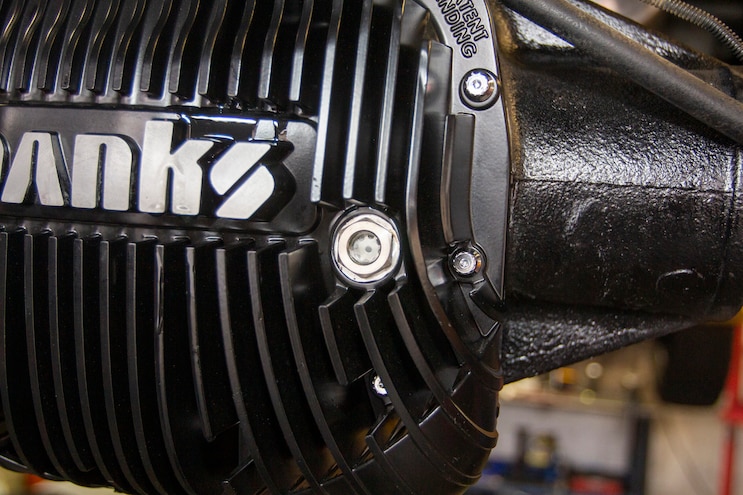 View Photo Gallery | 14 Photos
Photo 13/14   |   One of the nice features of the Banks diffcover, aside from the fill and drain plugs, is the sight glass. Banks has positioned the sight glass so that when the fluid level is midway in the glass the axle is full. This makes fluid checks quick and simple. 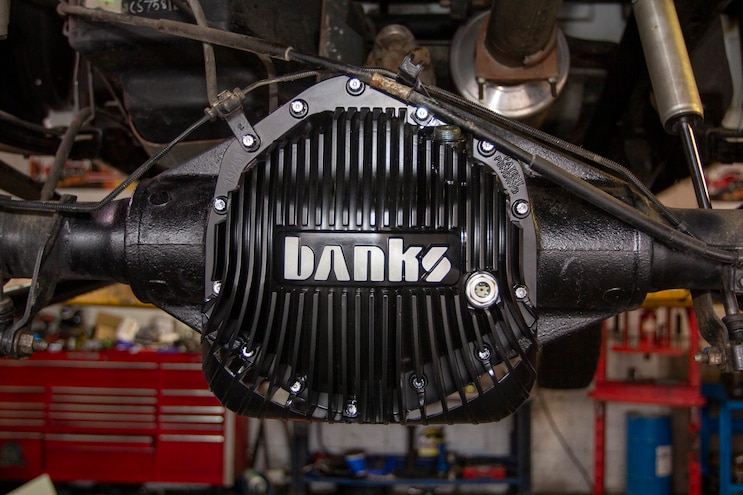 View Photo Gallery | 14 Photos
Photo 14/14   |   Although it looks a bit like a Darth Vader helmet at first glance, the Banks differential cover adds both functionality and design to the rear of the truck. Covers are available in both black, as seen here, and raw aluminum for those who wish to customize their cover.