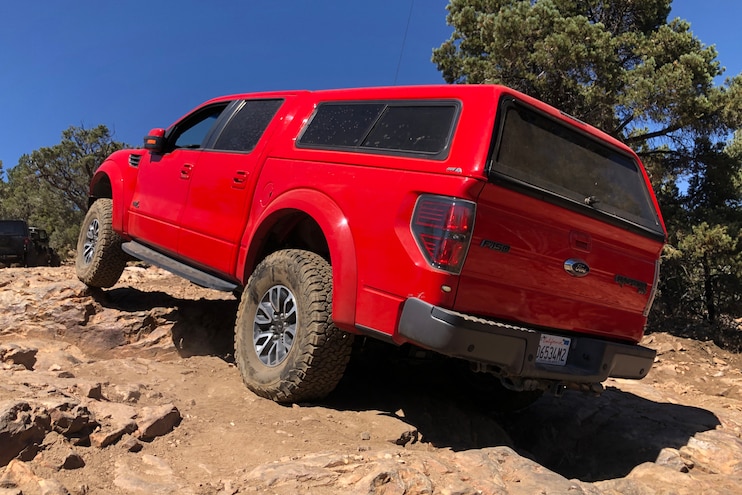 In our ever-enduring quest to make our trucks more useful we've happened upon BuiltRight Industries. BuiltRight is a small company based out of Connecticut and headed by 2018 SEMA Launch Pad winner Matt Beenen. They are dedicated to bringing high-quality, American-made products to the masses. While the company's catalog is limited at the moment, focusing on the most popular pickups first (Ford's F-150 and Super Duty lines), Matt says they'll have something for everyone very soon.
Eager to add more functionality and storage to our 2013 Ford F-150 project, we grabbed a BuiltRight catalog and ordered up nearly everything. 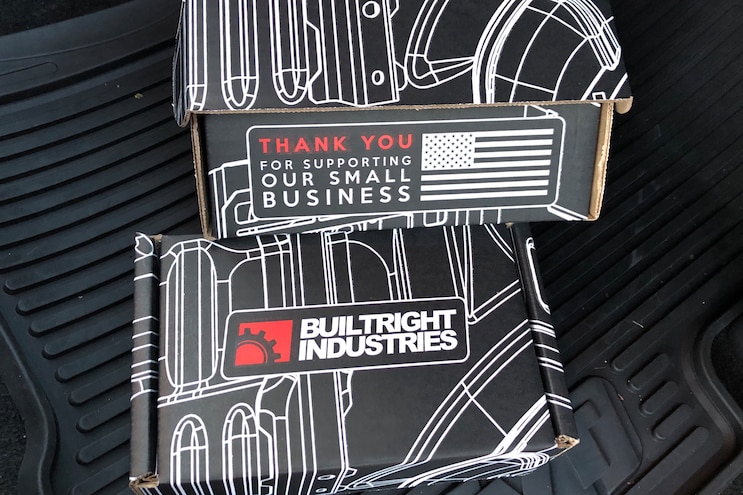 This one may seem like a no-brainer in the days when manufacturers are using every available inch of cab space. However, Ford for some reason decided to allow owners to flip up the rear seat bottoms but not lower the backrests despite building a latch and hinges into them. In an even weirder turn, Ford allowed just one half of the seat to open on 2015 and up F-150s and 2017 and up Super Duty pickups. Thankfully, BuiltRight offers a solution to easily access this otherwise unused space. 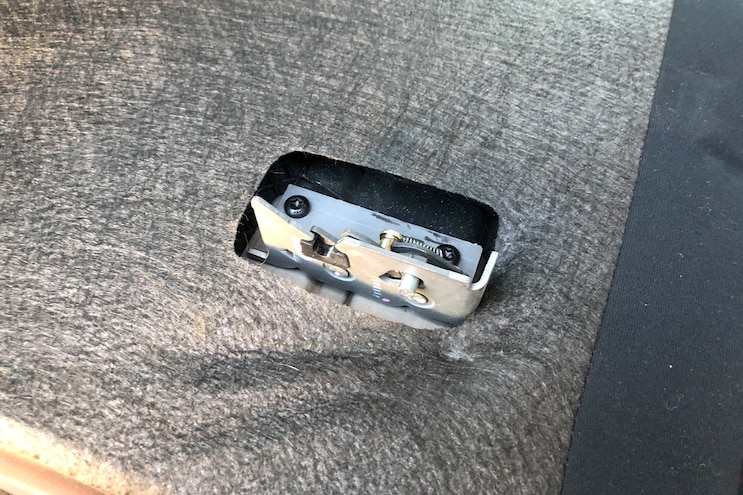 View Photo Gallery | 20 Photos
Photo 3/20   |   Seen here is the factory rear seatback release mechanism. It takes a little finesse, and small hands, to reach the release mechanism, but it's not impossible. We reached in and grabbed it with a small box wrench, though any tool with a closed end will work. 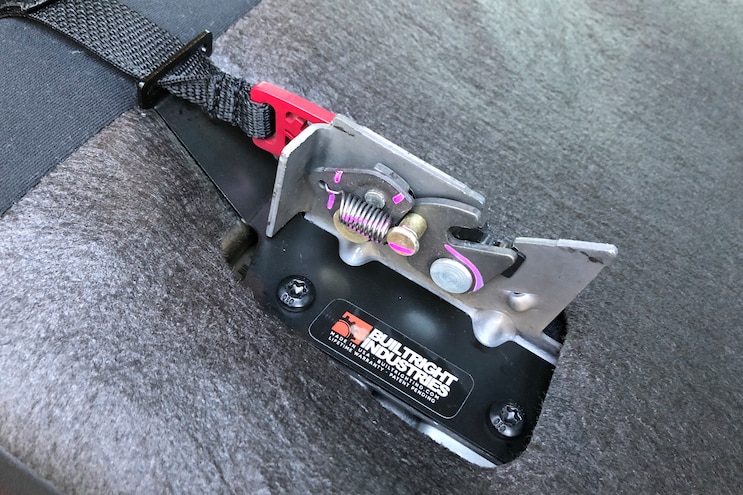 View Photo Gallery | 20 Photos
Photo 4/20   |   BuiltRight's solution involves a simple bracket that holds an aluminum catch over the release nub. A quick tug on the attached strap releases the seat from the rear of the cab. After reading the direction it took us about half an hour to install both latch release mechanisms. 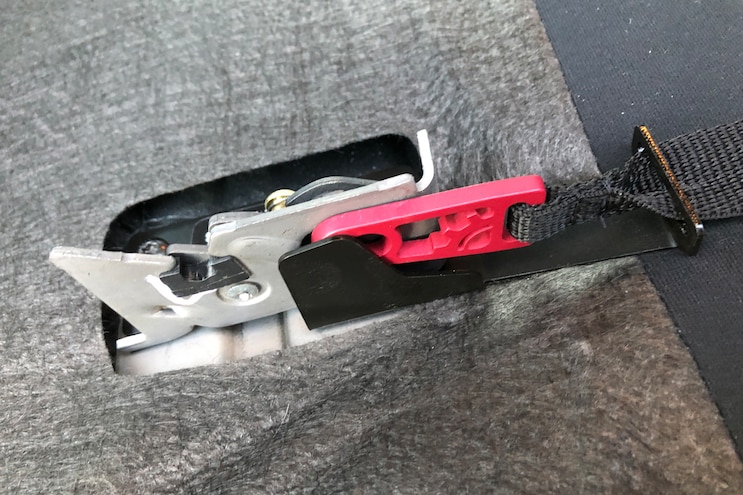 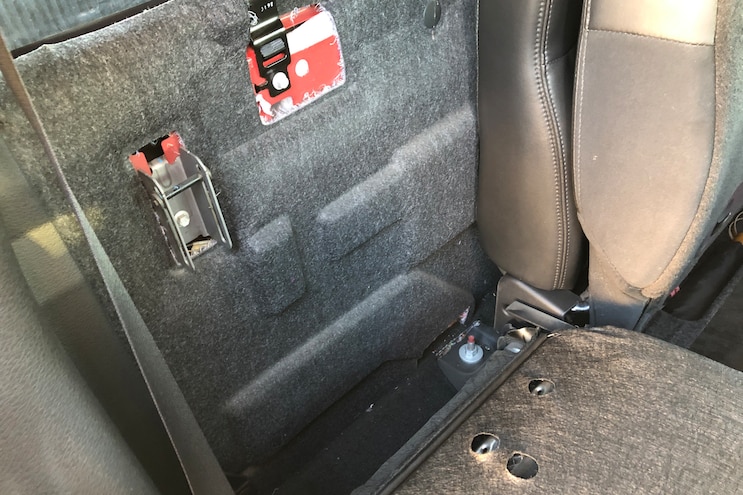 With the F-150's 2009 redesign Ford added a nifty little tray to the center of the dash. Unfortunately, this tray isn't quite large enough to hold anything useful. Wallets and sunglasses fly out on the easiest of turns, making it more of a conversation piece than actual storage. The BuiltRight dash mount provides a rigid mounting point for all types of accessories, including the most popular RAM Mounts. The mount is laser cut, CNC formed, and requires drilling only two holes to secure. 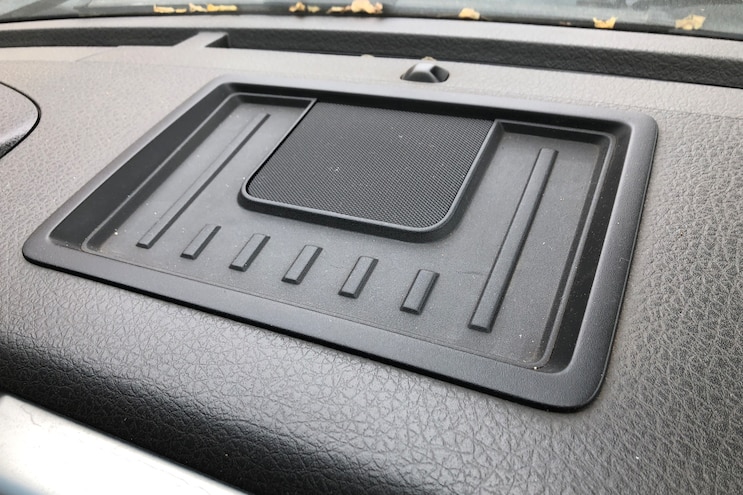 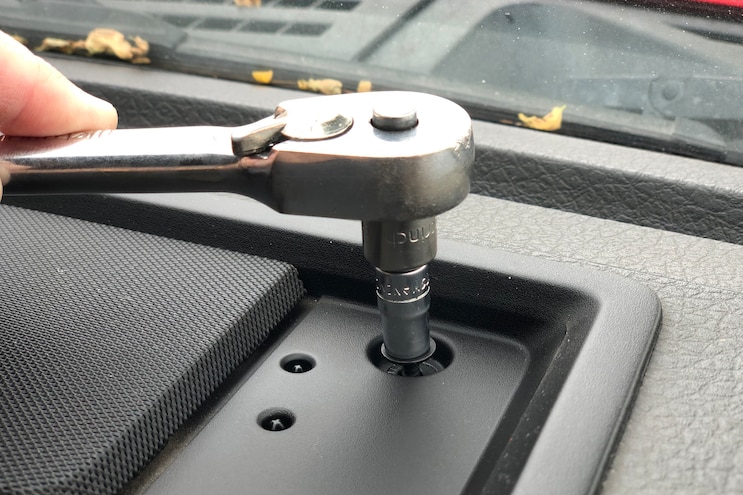 View Photo Gallery | 20 Photos
Photo 8/20   |   Removing the tray is simple. With the liner out two small bolts are all that secure it to the dash. Once unbolted the tray slides up and out. If your truck has the Sony audio system as ours does, you'll need to unplug the small speaker as well. 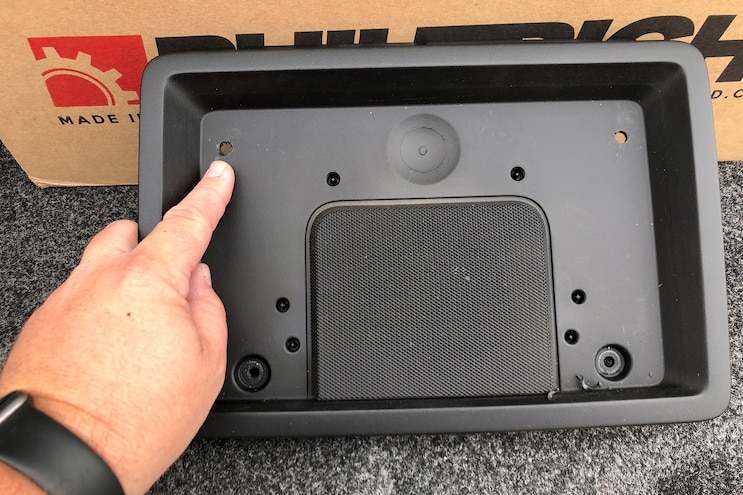 View Photo Gallery | 20 Photos
Photo 9/20   |   Using the dash mount as a template we marked and then drilled the two small holes needed to secure it to the tray. 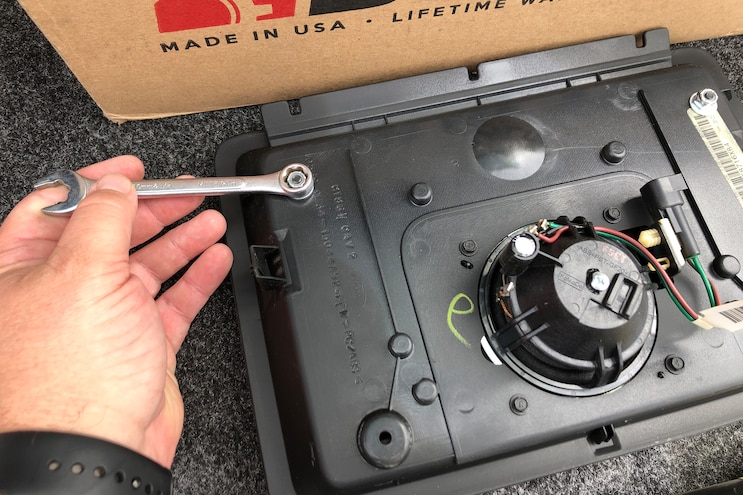 View Photo Gallery | 20 Photos
Photo 10/20   |   Before putting the tray back in the truck, we installed the liner in the tray and then the new dash mount. We then tightened up the new bolts. The BuiltRight dash mount uses these two bolts and the two factory bolts to secure itself. 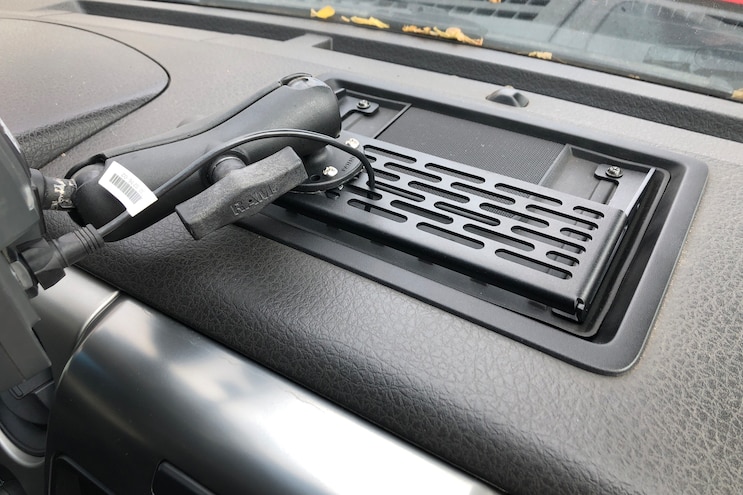 View Photo Gallery | 20 Photos
Photo 11/20   |   The laser-cut slots are perfect for securing RAM Mounts along with any number of other automotive accessories. Some ideas include dash cams, radar detectors, and GPS units. The tray is still a conversation piece, but at least now it's useful.

Have you ever looked at a pickup bed and wondered if something better could be done with the wasted space in the corners? Well, wonder no more as BuiltRight offers a bedside rack system that adds functionality in places previously left empty. These racks are CAD designed, laser cut, CNC formed, and have a lifetime warranty. Gear mounting options are only limited by your imagination, and yes, you can keep the factory tie-down point. Racks are available now for 2009 and up Ford F-150s and 2017 and up Super Duty pickups. Ram, GM, Toyota, and Jeep are coming soon. 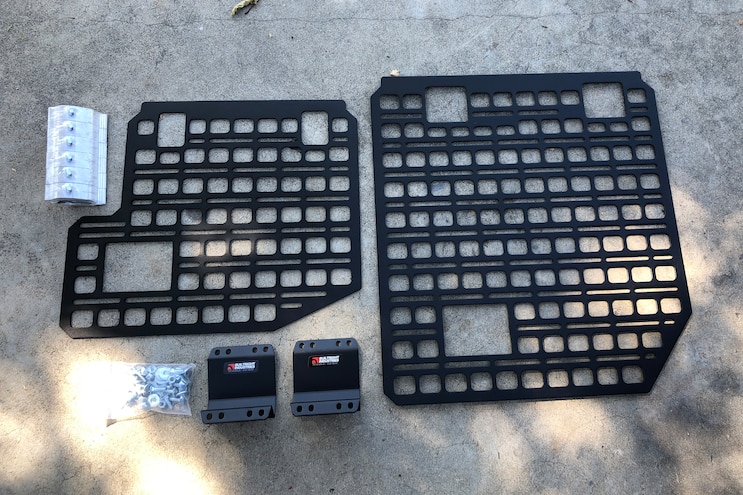 View Photo Gallery | 20 Photos
Photo 12/20   |   The bed rack kit comes with four panels, one for each corner. For our F-150 the rear panels are the large ones, while the small panels fit at the front of the bed. Included are the mounts used to secure the panels to the bed. If added strength is desired, the company offers clamps that hold the panels to the bedrail. 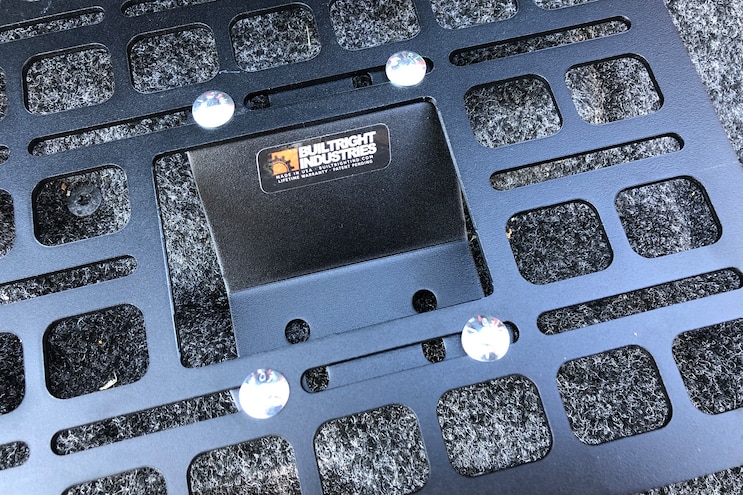 View Photo Gallery | 20 Photos
Photo 13/20   |   Panels are held in place with brackets that mount to the factory tie-down points. The brackets are held to the panels with carriage bolts for a clean look and easy installation. 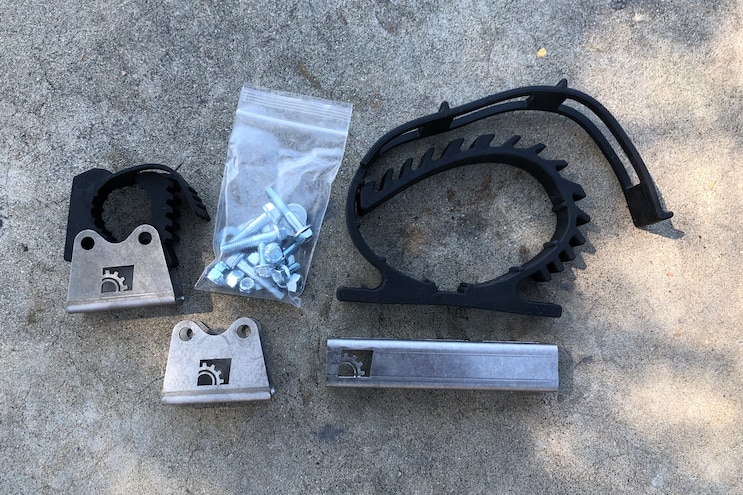 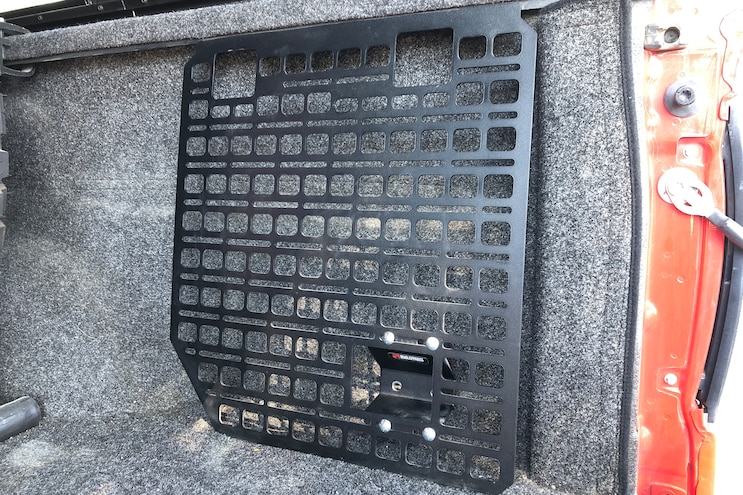 View Photo Gallery | 20 Photos
Photo 15/20   |   When mounting in the bed, the panels slide in behind the bedrail. These panels have been tested to work with spray-in bedliners, BedRug liners like we have, or no liner at all. They will not work with drop-in plastic liners. Most bed caps and tonneau covers are also compatible. 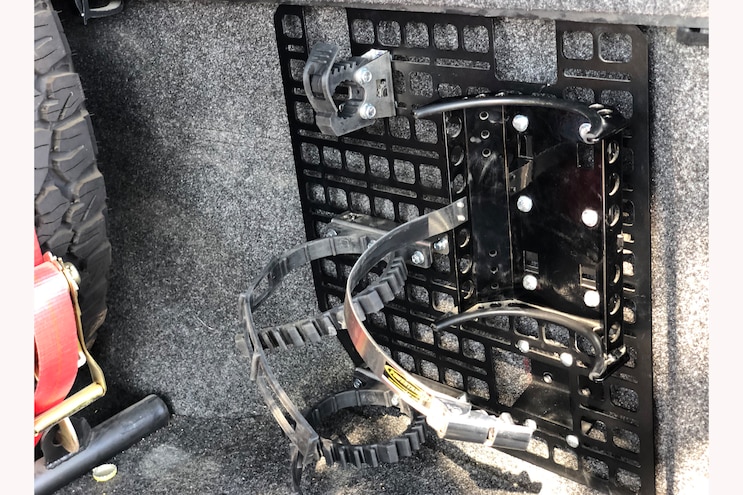 View Photo Gallery | 20 Photos
Photo 16/20   |   Unless you have freakishly small hands, any accessories that you plan to mount on the rack should be attached prior to bolting the rack in place. Our perfect layout took a few tries to get right, so don't fret if you don't like your first draft. 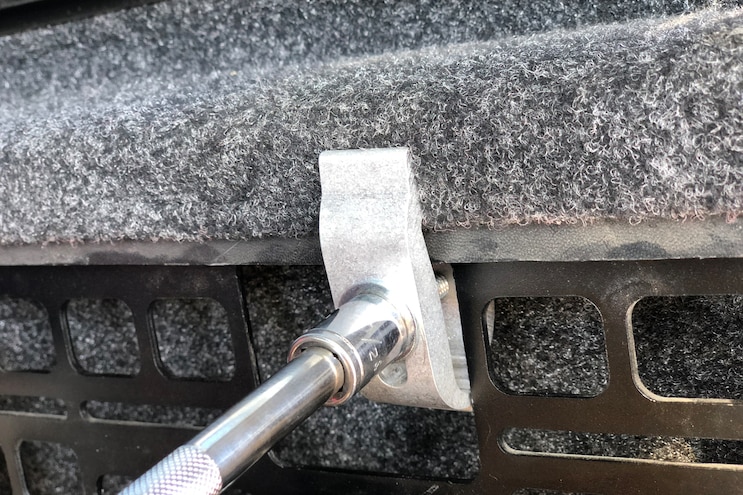 View Photo Gallery | 20 Photos
Photo 17/20   |   The optional accessory clamps grab the backside of the bedrail and the rack, clamping them to each other. We placed two on each rack and recommend it if you're going to mount heavy items as we did. 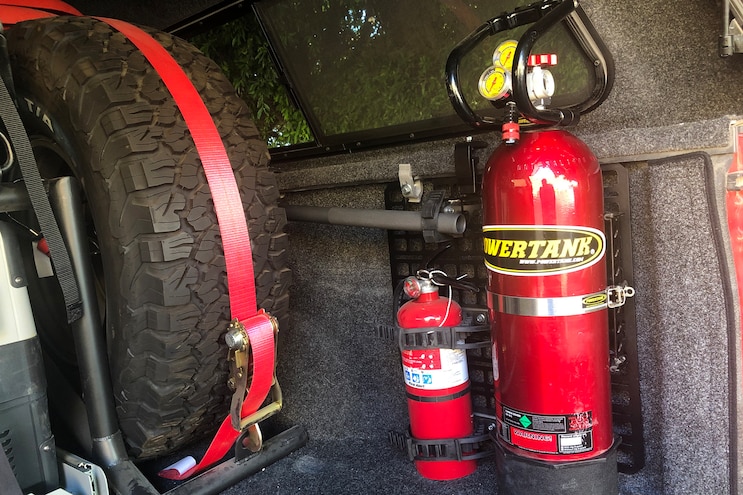 View Photo Gallery | 20 Photos
Photo 18/20   |   The options for mounting gear to the bed racks is nearly limitless. We used one of our racks to hold a fire extinguisher, a 15-pound PowerTank, and one end of our ProEagle jack handle. We've put hundreds of off-road miles on this setup and have noted no movement.

For all of those little things that you just can't seem to find a good home for but need frequently, there's the Velcro Tech Panel. These panels, offered in three sizes, have Velcro hook-and-loop fasteners on the back side and will firmly stick to any carpeted surface. A great example of which is on the underside of the rear seats. For our application we have a BedRug carpet kit in the bed, and the inside of our ARE bed cap is also lined with carpet. This gives us the ultimate in flexibility for keeping small items within reach. 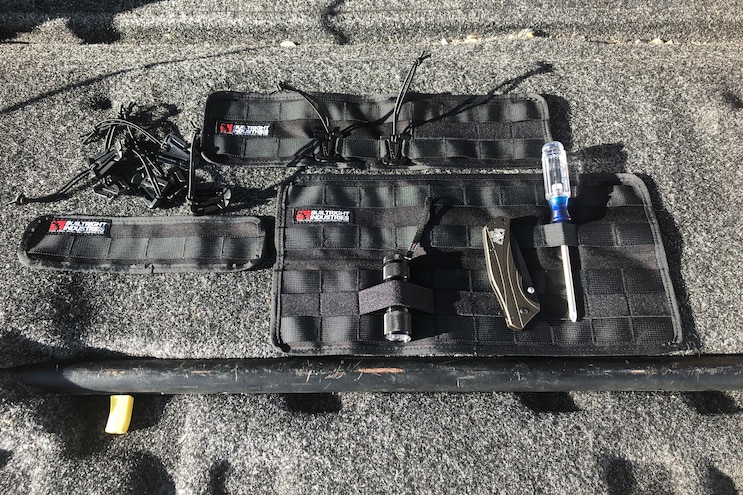 Just a personal peeve of ours, but we hate large mast antennas. So, the first thing we did when we acquired our new-to-us 2013 Raptor was to swap out the factory antenna for an anodized billet aluminum one from BuiltRight. 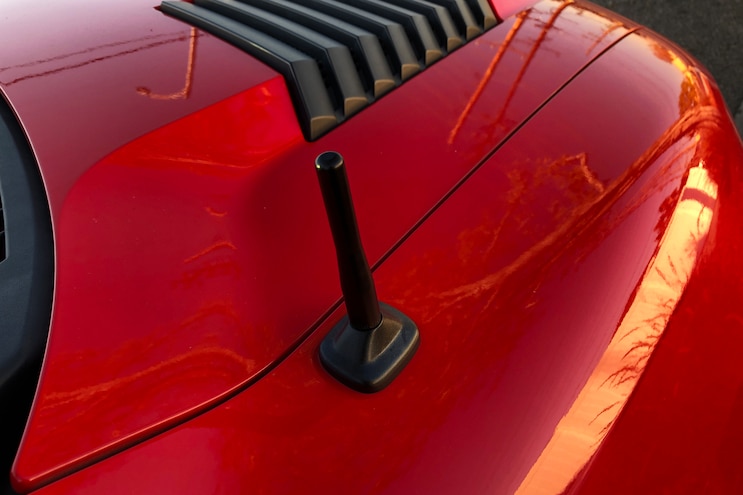