Million Mile Tundra: The Tear Down 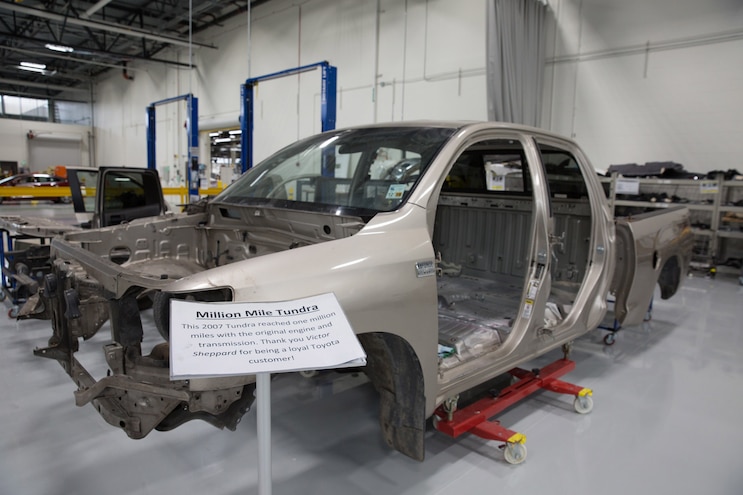 After spending a few months touring various Toyota facilities, the Million-Mile Tundra’s body, interior, and engine were recently torn down to examine just how well each individual piece held up during its life. The plan was to identify any defects and work with engineering to ensure they don’t arise in future products. Unfortunately, the plan didn’t go exactly as they hoped. The remarkable Tundra—driven relentlessly, often overloaded with cargo—was, well, unremarkable in that nothing significant was out of spec. The ’07 Tundra, now known affectionately as the “Beast,” quite literally could still be going strong today. 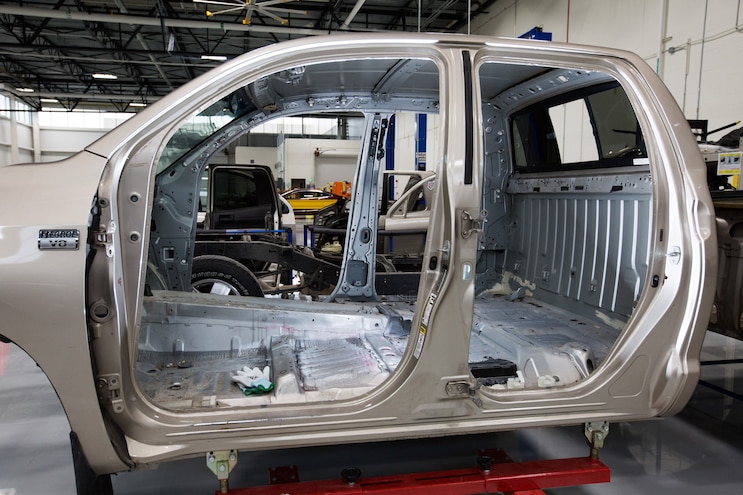 The Heart of the Beast

It was the night shift on March 28, 2007, at Toyota’s Huntsville, Alabama, engine plant when the Beast’s 4.7L V-8 began life as a non-descript piece of cast iron. Machined on site and then transported on a line around the facility, the engine was quality-checked several times before making its way onto a shipping crate bound for Toyota’s San Antonio, Texas, assembly plant. The engine was one of several thousand the facility would build that year.
When the plant opened in 2003, it only built the 4.7L 2UZ-FE engine and was the only facility outside of Japan to build a V-8. Being a new plant with a small group of employees helped create a family atmosphere with quality being the main focus as they had a lot to prove to the bosses Japan. 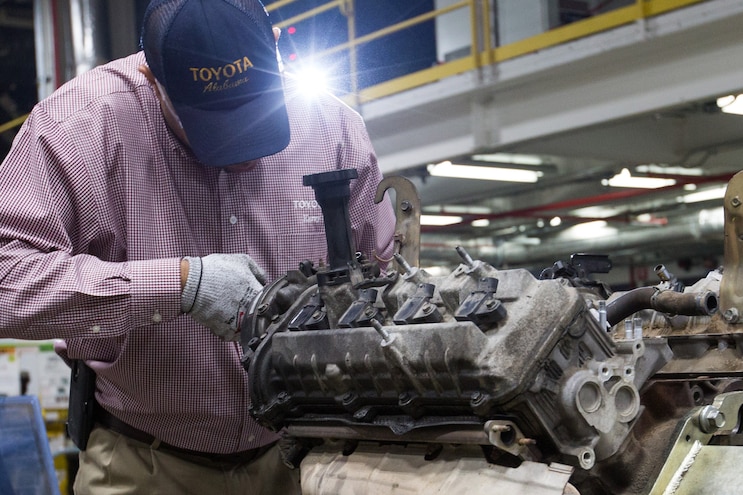 View Photo Gallery | 54 Photos
Photo 3/54   |   Million Mile 2007 Toyota Tundra Tear Down Engine
“Our goal was make the best quality we could.” Shane Perry, Toyota production group leader said. “I don’t think a million miles ever crossed our minds, at least not mine.”
When the Beast’s engine made its way back home, the Huntsville team was very eager to examine it. However, exactly how they would examine the engine created a considerable debate.
Perry wanted to start the process by putting the engine on a dynamometer to see how its performance had degraded over time. However, Bruce Myatt, Toyota quality manager, was very concerned about damaging the engine. 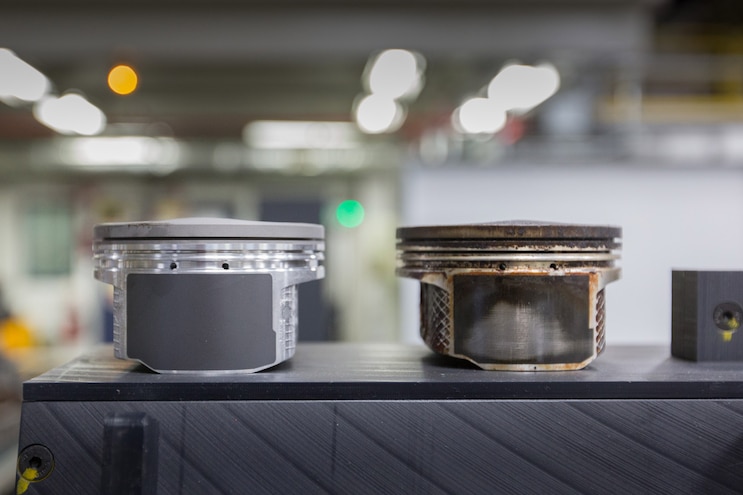 View Photo Gallery | 54 Photos
Photo 4/54   |   Million Mile 2007 Toyota Tundra Tear Down Pistons Comparison
Also making the dynamometer issue tough was the fact that Huntsville doesn’t build the 2UZ-FE engine anymore. Its dynamometer is set up for only the engines the plant currently builds, and it would need to make, modify, and even scavenge a part from a display to connect the engine to the dyno.
“Perry called me one night and said they’d hooked it up,” said Myatt. “I was hesitant. He said it idled really well.”
The next night, the team turned it over and pushed the engine to its 5,700-rpm redline.
“It was exciting to see the power figures from the engine in our cell,” said Gary Baker, quality team leader. “The engine performed better than many new engines off our line.”
Perry says the better numbers are likely due to the engine being broken in. However, for a mill with a million miles on it, the dynamometer results are very impressive. The team now knew they had a good engine on their hands.
Tearing it down would confirm their suspicions. From the piston heads, valve stems, crankshaft journals, and the block itself, the engine was in impeccable condition and impressed everyone who saw it. 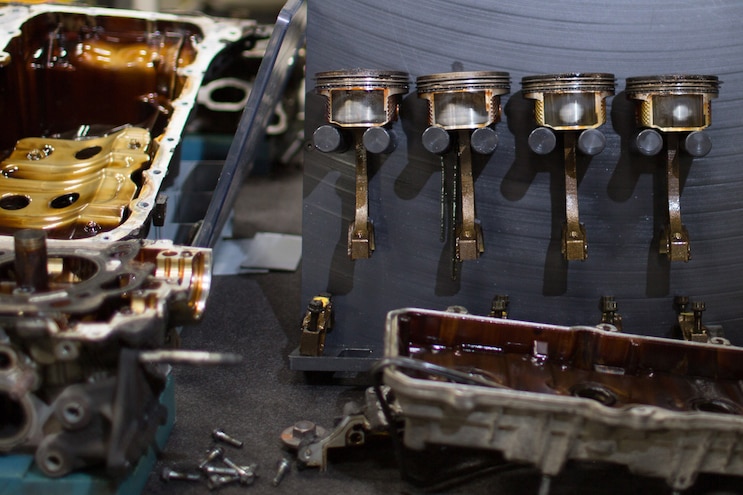 View Photo Gallery | 54 Photos
Photo 5/54   |   Million Mile 2007 Toyota Tundra Tear Down Internals
Examining the parts in person is quite amazing. There is very little carbon buildup on the valve stems, the cross hatching is still visible on the cylinder walls, and the crankshaft journals have no visible wear marks. The only thing they found was one slight mark on a bearing.
“We remeasured the head, the block, and cams in our lab,” said Connie Roberts, Toyota quality manager. “Nothing was abnormal. It wasn’t within specifications, but after a million miles it isn’t going to be. The biggest surprise to me was the bearings. They are probably the cleanest I’ve ever seen come out of an engine.”
After examining the parts, measuring them against specs and testing the engine on the dyno, the team was pleasantly happy to discover as it sits, the engine would have scored a 99/100 on their quality tests—high enough to pass it as a good engine.
“We have seen our durability test engines have a considerable amount more wear and tear than this engine,” Myatt said several times during our visit. Each time he says it, he smiles.

The Rest Of The Truck

Sitting 615 miles north of Huntsville lays the rest of the Tundra, as a collection of parts for the first time since it rolled off the assembly line on April 10, 2007. Like their Alabama colleagues, Toyota engineers didn’t initially start tearing it down. Rather, they all were eager to drive it, including one of the original ride and handling engineers from when the truck was first being developed.
“It held up extremely well,” said Stephen Provost, senior principal engineer in vehicle performance development. “The performance at the end was amazingly close to the original truck. We do an initial mileage accumulation with the trucks and then we drive them after that to get a sense of how they will perform through what would be considered a normal life cycle. It was amazing to see how close this Tundra was to a normal accumulation mile vehicle.”
Impressed with the driving dynamics of the truck even after all the miles, the team started meticulously disassembling the truck, including removing the body from the frame. Each part was labeled with similar parts on a collection of shelves. Also, like their Alabama colleagues, what they didn’t find is the amazing part of the story. 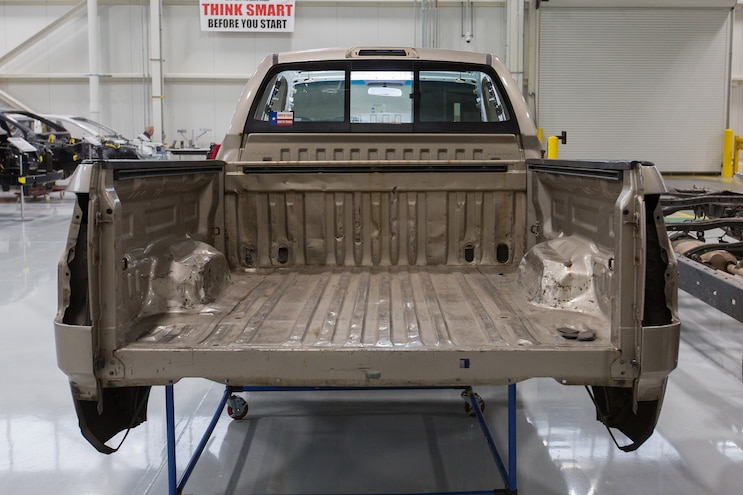 View Photo Gallery | 54 Photos
Photo 6/54   |   Million Mile 2007 Toyota Tundra Tear Down Bed
The most visual reminder of what Sheppard used the truck for is the bed. Elevated on a rolling stand, the engineering team was able to thoroughly examine the bed from all angles. Looking at all the dents from the top and underneath, the team didn’t find a single instance of a deformity due to their engineering. In fact, the only major damage is found on the wheel wells, which Sheppard told the team was due to pallet, a common item he loaded the bed with, being wider than advertised.
Remarkably, the tailgate itself still worked, even after Sheppard’s numerous cross-country hauls, ranging from 1,500 to 2,700 pounds, were loaded and unloaded. The only causality was the dampener, which, to no surprise, didn’t work as well as a brand-new unit.
“Now we can learn from it and how it was used,” said Kevin Gileo, executive program manager for the Tundra. “Then, we can feed that data back into the future development of the truck.”
Another area of interest is the frame and leaf springs. Sheppard carried a considerable amount of weight long distances through a variety of weather and road conditions. With Toyota’s history of frame rust issues, as well as the amount of weight often in the bed, the expectation was there would be something to see. Like much of the truck, the unremarkable is the remarkable. The frame didn’t show any surface rust and the leaf springs were in good shape.
“It is surprising with the loading this went through, how well the leaf springs held up,” said Gileo. “To be honest, we don’t really have a million-mile expectation, but it met our expectation.”
On the inside, Toyota engineers have stripped the truck down to the bare metal. Remarkably, it looks very much like it did when it came off the assembly line and is rust free. 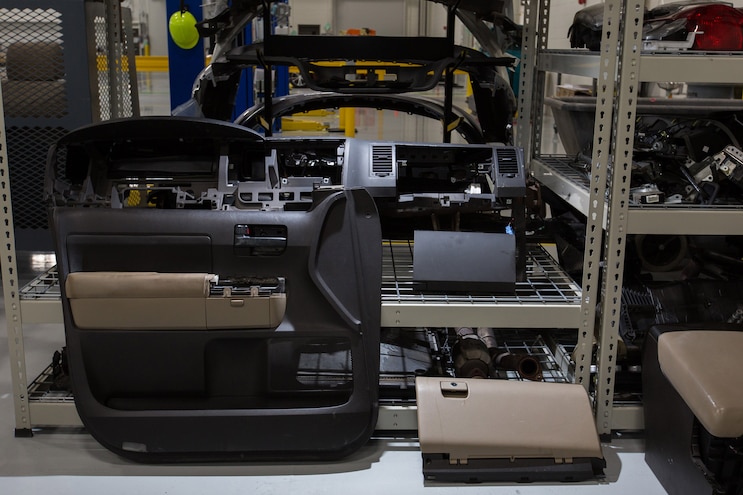 View Photo Gallery | 54 Photos
Photo 7/54   |   Million Mile 2007 Toyota Tundra Tear Down Interior Parts
Looking at individual components, it is really remarkable how well multiple items still work. For example, the driver side door latch, an item Sheppard had to use thousands of times, still worked exactly to specifications. The center console latch and the glovebox are the same. Each of these items worked like it did when it first came off the line.
Then there is the driver seat. This was a key item for Toyota engineers considering Sheppard said he often slept in the truck and by no stretch of the imagination is he a small guy. In fact, the seat was such a source of excitement and curiosity it was shipped to Japan to be examined by the team over there.
Now back at the technical center for our visit, it sits alongside the cloth interior that once covered it. After being thoroughly examined by American and Japanese engineers, the seat was found to be completely functional and meeting specification. 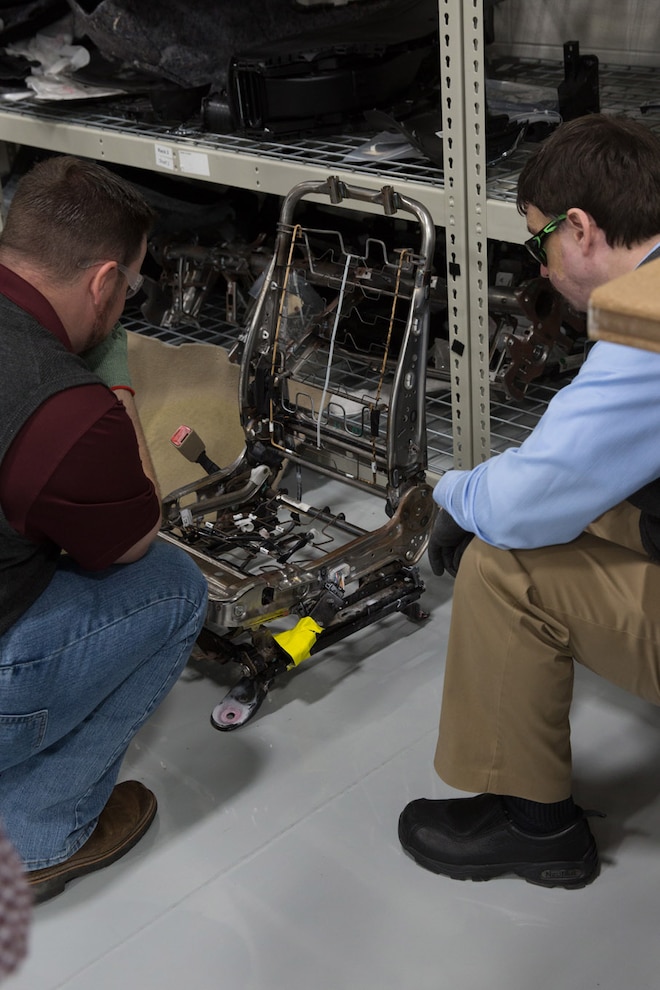 View Photo Gallery | 54 Photos
Photo 8/54   |   Million Mile 2007 Toyota Tundra Tear Down Seat
“To be honest with you, I think the reason it traveled so much was the condition it is in,” Gileo said. “Seat architecture isn’t just a Tundra product, this is used in a variety of Toyota and Lexus products globally and various engineers wanted to see it. It is impressive how well it held up.”
There is a lot of testing that goes into seat development, but you can’t replicate this amount of wear and tear.
Toyota engineers did find one tear on the cloth about the length of a quarter. This tear could have been from a variety of things and was a concern until they noticed the tear was just on the surface. It never made it through the rear of the seat padding.
The reality is this truck—designed in Michigan, built in Texas, unique to Toyota’s global portfolio, and with a million miles on it—could still be on the road today with such a short list of broken items that the mechanics wouldn’t believe you if you brought it in for repair. 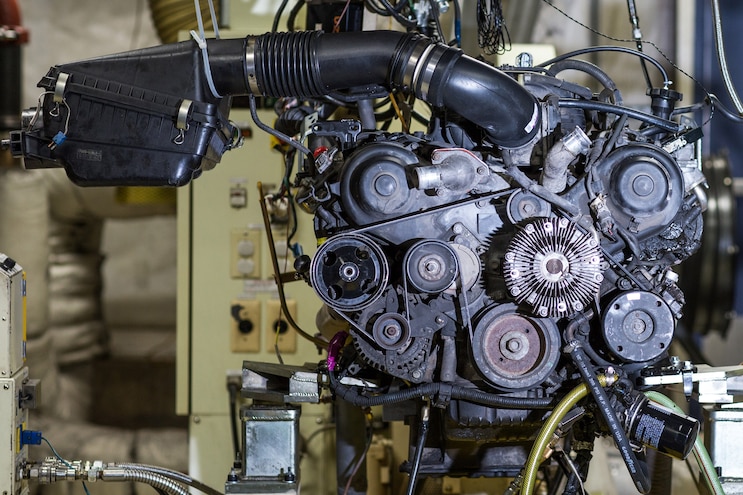 With the truck thoroughly disassembled, both the Toyota Technical Center and Huntsville, Alabama, plant have similar plans for it. It will each bring in suppliers to look over their specific parts and continue to show off the components to various Toyota engineers.
Then, it will each rebuild the truck in a way to display it. Huntsville, Alabama, plans to use it as a training tool for new employees when they talk about quality. The Toyota Technical Center plans to setup a permanent display in a new expansion they have been working on.
In each case, the story is the same. The Million-Mile Tundra will be a visual display of Toyota’s mantra of quality, durability and reliability. Well, until Sheppard brings in another million-mile Tundra to replace it. He is already well on his way.