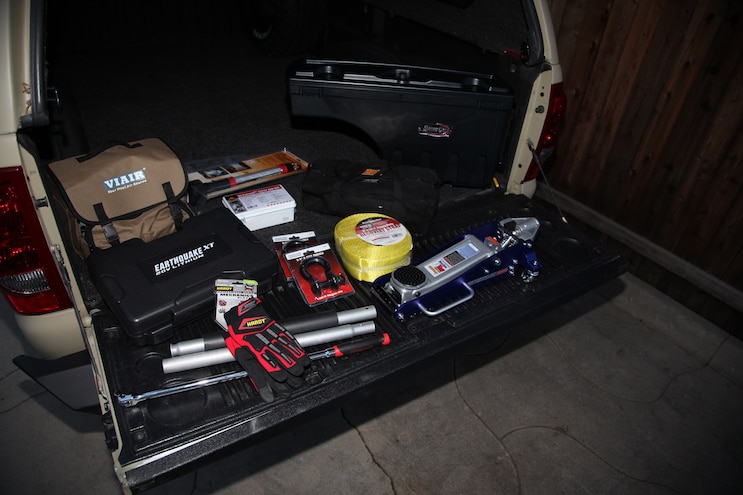 If you’ve been following along for the last year or so, you know our Beat to Neat Silverado project has come a long way. Our ’03 Silverado 1500 work truck has had engine mods, an interior makeover with custom audio, paint, a shell, a rack, bumpers, lighting, and a complete suspension rebuild with a 7-inch lift, 35s, and 4.56:1 gears. At this point, we’re ready to hit the trails and have some fun. But that got us thinking: Wouldn’t it be nice to have a lot of the items we would take on a trip loaded up in the bed permanently, so we don’t have to destroy the garage and toolbox at the last minute like we usually do when we’re trying to leave town? That sounded pretty good to us!
With our reservoir shocks, rear sway bar, and custom exhaust, there was no way we were going to fit a 35-inch spare in the stock location, so we contacted Titan Fuel Tanks—not for an auxiliary tank, but for an in-bed spare tire mount. 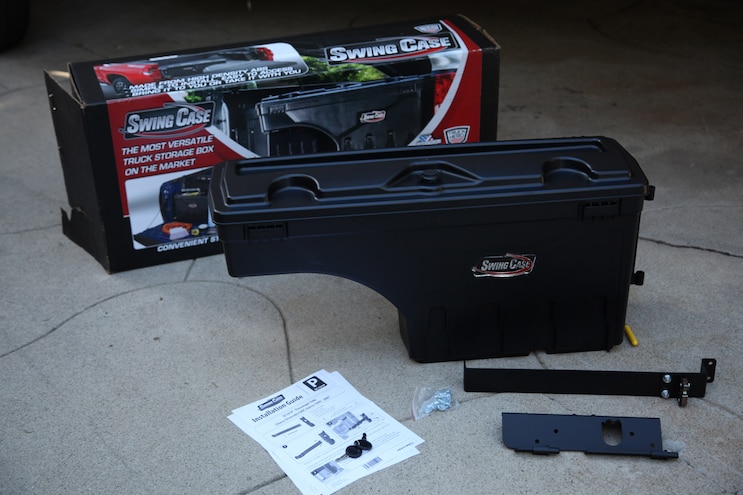 View Photo Gallery | 19 Photos
Photo 2/19   |   One of our main goals was to have many of our emergency items onboard the truck at all times and not rolling around in the bed. UnderCover’s SwingCase fit the bill perfectly. Once installed, it pops on and off without tools, and the twist-lock allows opens the SwingCase with or without a key. It’s made of lightweight, high-impact, ABS plastic, and, best of all, once you release the lever you can easily access it from the back of the tailgate.
The Spare Tire Buddy is super easy to install and took away the headache of figuring out a way to mount a spare. We also found an 18-inch factory steel wheel and wrapped it with a matching General Grabber ATX, just like the tires on the truck. We decided to add some storage on the same side of the truck and contacted UnderCover for one of its SwingCases. As the name implies, the case remains secured to the bedside, until you pull the release lever and the case swings out over the tailgate. It’s easily reachable while standing behind the tailgate. Since we’ll be airing the tires down, we wanted a way to air them back up on the fly, so we got in touch with Viair for its 450P Automatic Compressor. Finally, we needed a way to change a tire, since there is a sub enclosure where the factory tools used to be located. We did a little shopping spree at the local Harbor Freight and procured a Pittsburgh 1½-ton jack, a ½-inch Pittsburgh Pro breaker bar, and a ½-inch-drive Earthquake XT lithium cordless impact. We already had a tool bag handy from our friends at JP magazine, so we filled it with essential tools, including a set of ½-inch deep sockets. In case we get stuck, we grabbed a 9,000-pound recovery strap and a couple D-ring shackles that fit right into our Move bumpers. Finally, we threw in a few extras, like a first-aid kit, a rechargeable LED light, and a set of Hardy mechanics gloves.
We may not have everything we’ll need out on the trail, but we’ve got a pretty good start. After more than a week of driving, the items strategically packed into place in the SwingCase and around the spare have stayed put. We’re right at the finish line with our Over/Under build, so keep an eye out for a complete feature in an upcoming issue. 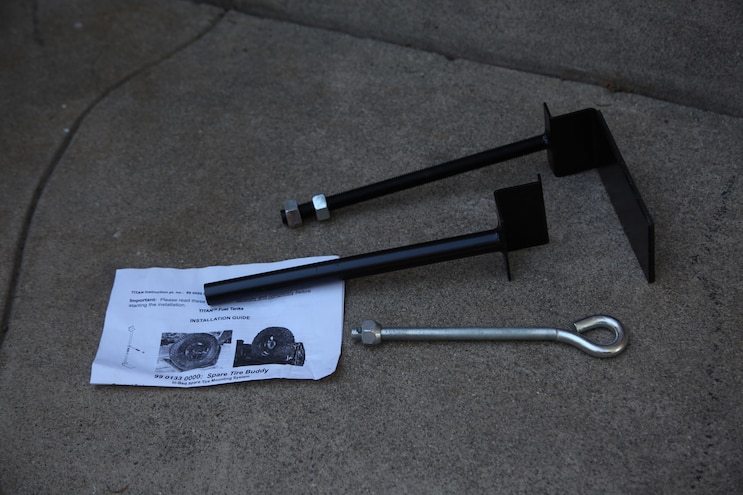 View Photo Gallery | 19 Photos
Photo 3/19   |   Once we realized a 35-inch spare was not going back under the truck, we searched for an easily installed spare tire mount that didn’t require a bunch of drilling. Titan is known for auxiliary fuel tanks, but its Spare Tire Buddy was just what we needed. 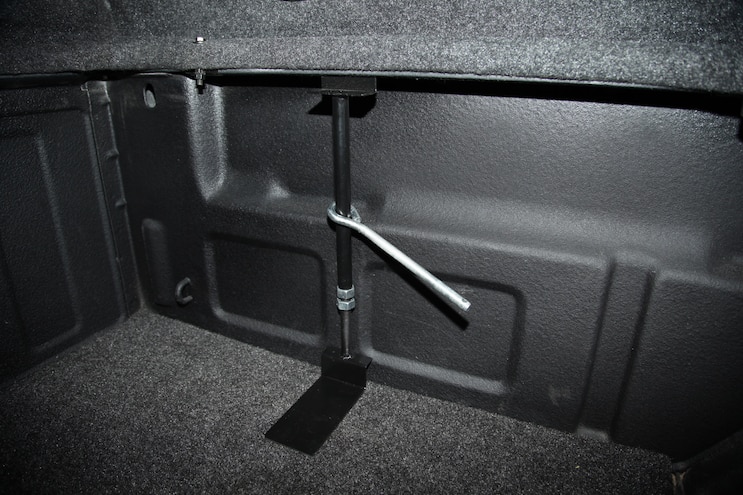 View Photo Gallery | 19 Photos
Photo 4/19   |   We assembled the mount in a matter of seconds, then loosely mounted it to the bedrail so we could roll the tire up and see where to permanently mount it. 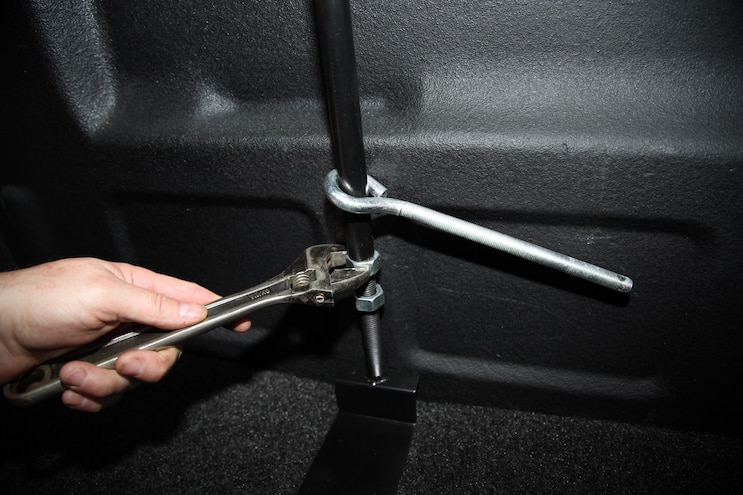 View Photo Gallery | 19 Photos
Photo 5/19   |   Then we tightened the nut to lock the mount in place between the bedrail and bedfloor. A second nut locks the first in place. 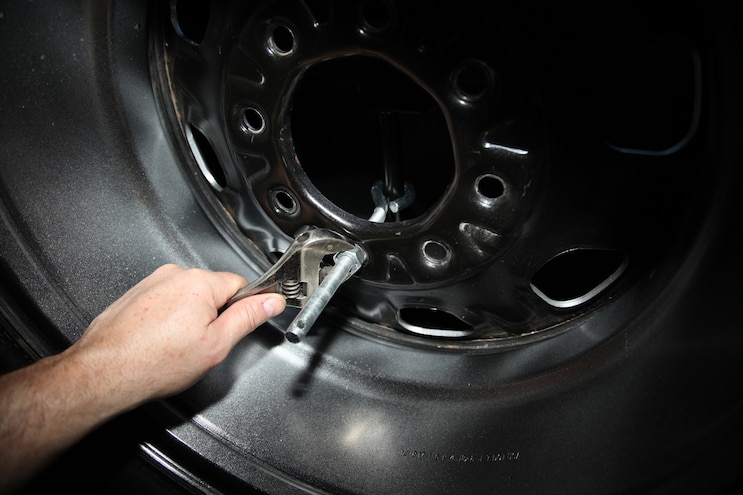 View Photo Gallery | 19 Photos
Photo 6/19   |   Then we rolled the spare into place, slid the eye-bolt through one of the lug holes, and snugged it down. 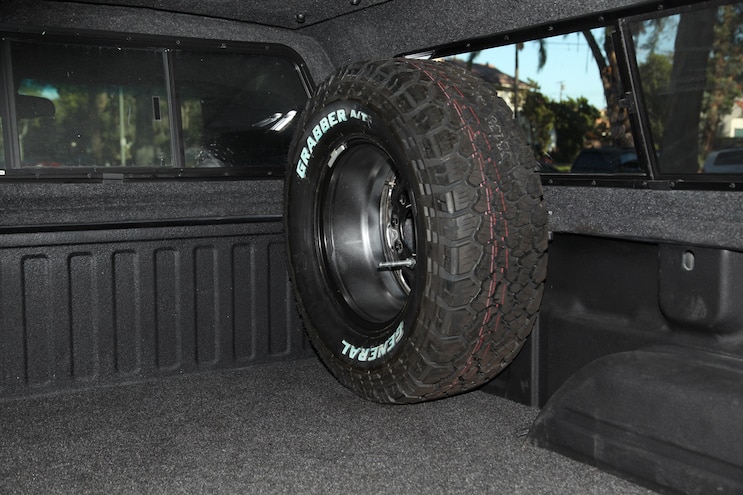 View Photo Gallery | 19 Photos
Photo 7/19   |   The General Grabber ATX looks right at home secured up in the bed. After a couple hundred miles of driving, not a single rattle. 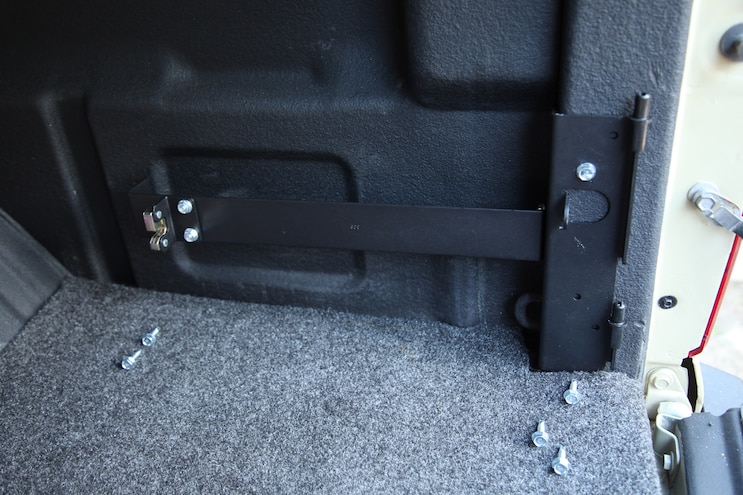 View Photo Gallery | 19 Photos
Photo 8/19   |   The SwingCase install began with these two brackets being bolted together. Then it was placed snug on the rear stake pocket and as far down as the tie-down anchor will allow. 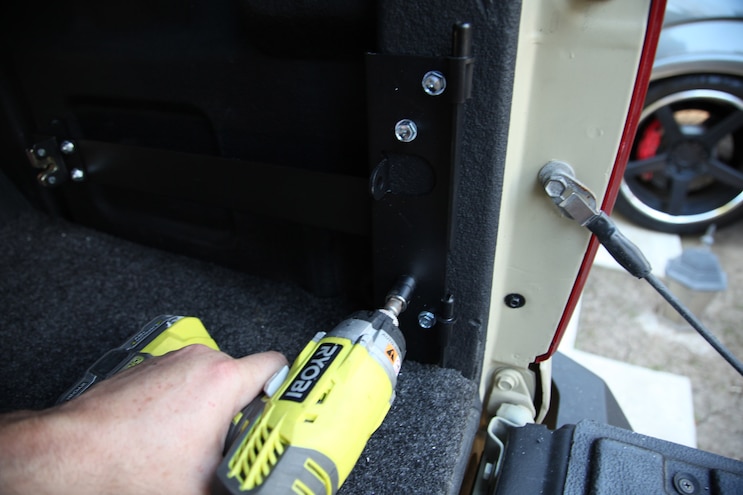 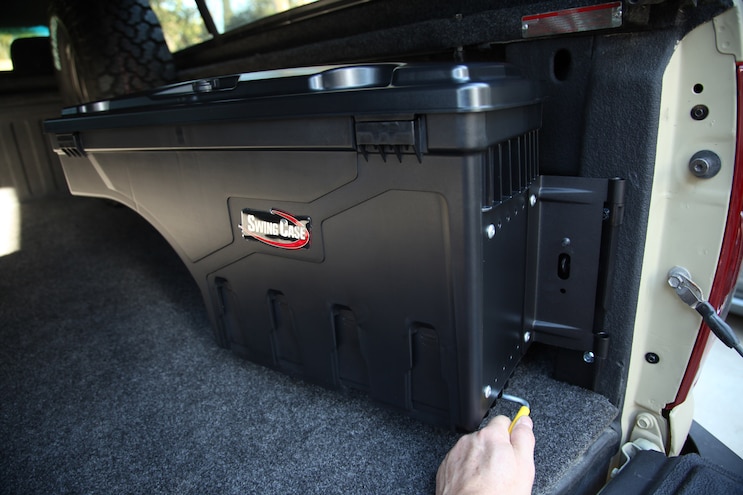 View Photo Gallery | 19 Photos
Photo 10/19   |   From there, we set the SwingCase on the hinge, and we were pretty much done. We pushed it back and it locked into place on the first try. 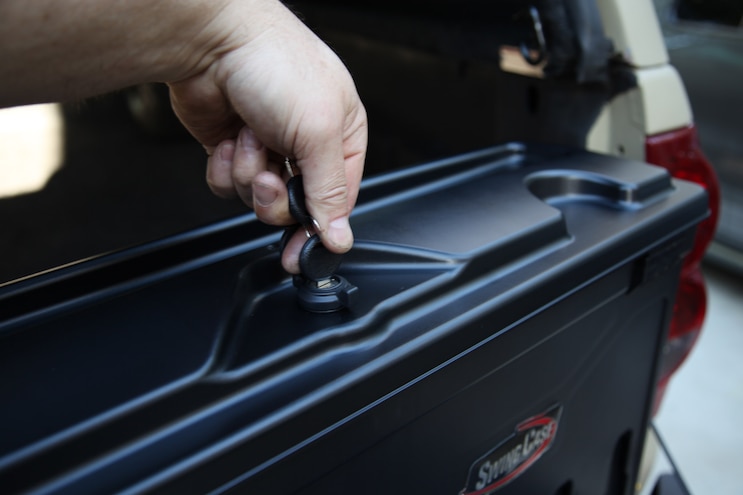 View Photo Gallery | 19 Photos
Photo 11/19   |   The SwingCase comes with a set of keys for the twist lock, giving you the option of keeping it closed with or without locking it.

View Photo Gallery | 19 Photos
Photo 12/19   |   Another security feature is the ability to lock the SwingCase into place on the bedside with a standard padlock. We like the added layers of security even if someone breaks into the shell. 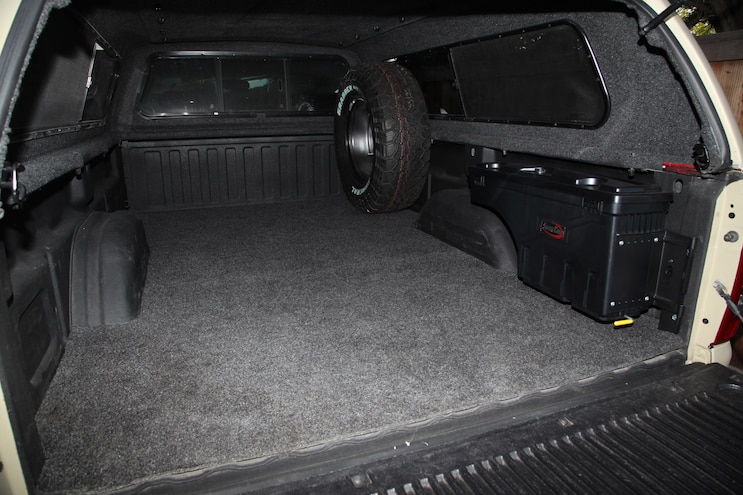 View Photo Gallery | 19 Photos
Photo 13/19   |   Our bed area was looking pretty good; now we just needed to load it up with all the essentials for an off-road excursion. 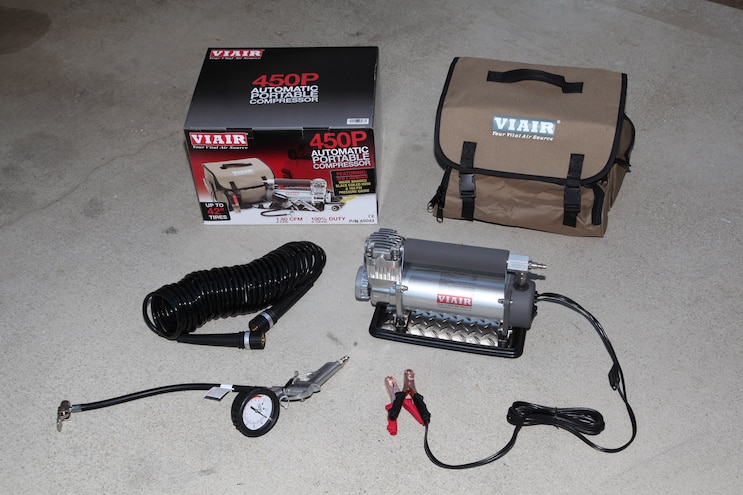 View Photo Gallery | 19 Photos
Photo 14/19   |   The Viair 450P-Automatic features an automatic shut-off function in a powerful portable tire inflator that will fill a 42-inch tire! The 100-percent-duty-cycle unit is capable of pressures up to 150 psi and can be operated for up to 40 minutes at a time before needing a rest. It even comes with a close-ended gas station–style air gun for added convenience. 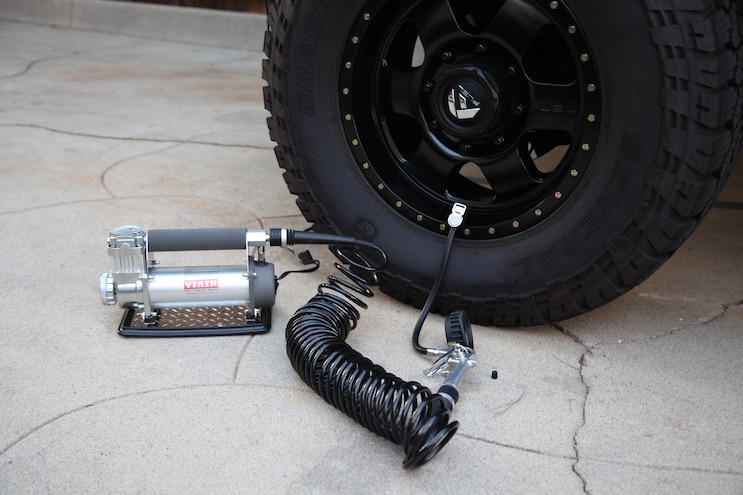 View Photo Gallery | 19 Photos
Photo 15/19   |   We hooked the Viair portable up and gave it a whirl. The automatic shutoff function comes into play when moving from tire to tire, or when checking the tire pressure. A standard compressor must be turned off between fills, or while checking tire pressure, which can turn into running back and forth to turn the unit on and off. We’ve actually wanted one of these units for a long time. 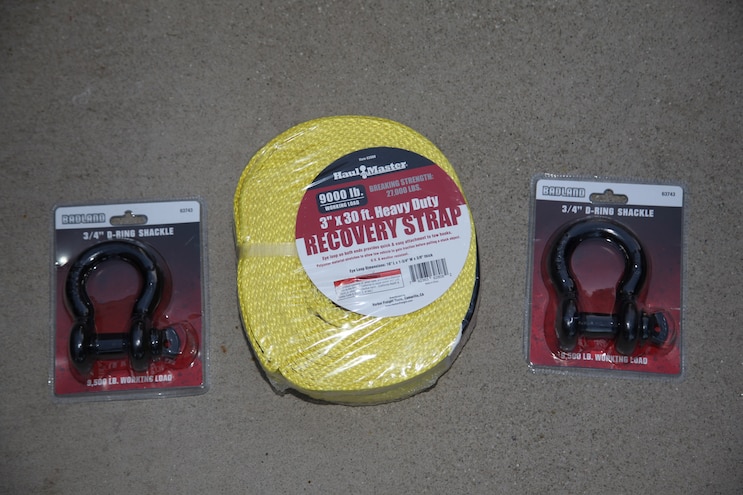 View Photo Gallery | 19 Photos
Photo 16/19   |   So we’ve got a fullsize spare, we’ve got storage, and we’ve got onboard air. The next thing we thought about was getting out of a bind on the trail. We hit the local Harbor Freight for a 9,000-pound recovery strap and a couple D-ring shackles that fit right in our Move bumpers. Check that one off the list! 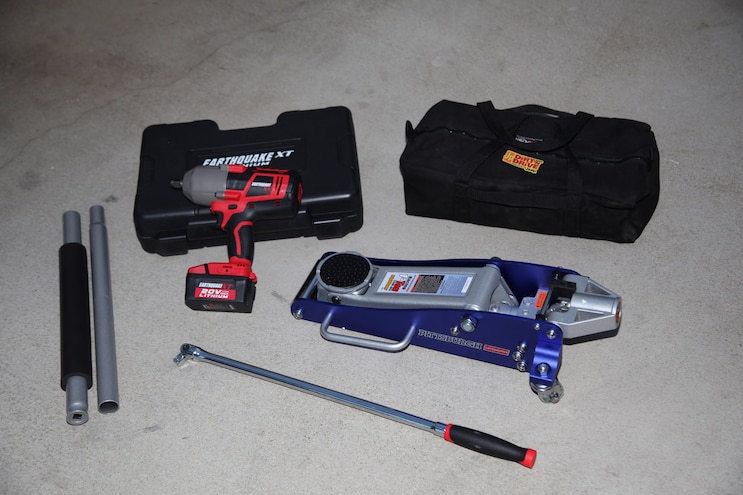 View Photo Gallery | 19 Photos
Photo 17/19   |   Changing a tire was next on our list, since all the factory tools were now obsolete. First, we packed up a tool bag (that was a very nice giveaway from JP magazine) with all the essential handtools, including a complete ½-inch socket set. Then it was Harbor Freight to the rescue again with its 1½-ton aluminum jack, Pittsburgh ½-inch breaker bar, and Earthquake XT 20V Lithium ½-inch drive cordless impact gun. This bad boy offers 1,200 ft-lbs bolt breakaway torque, making lug nut removal or accessible suspension repairs easier than ever. 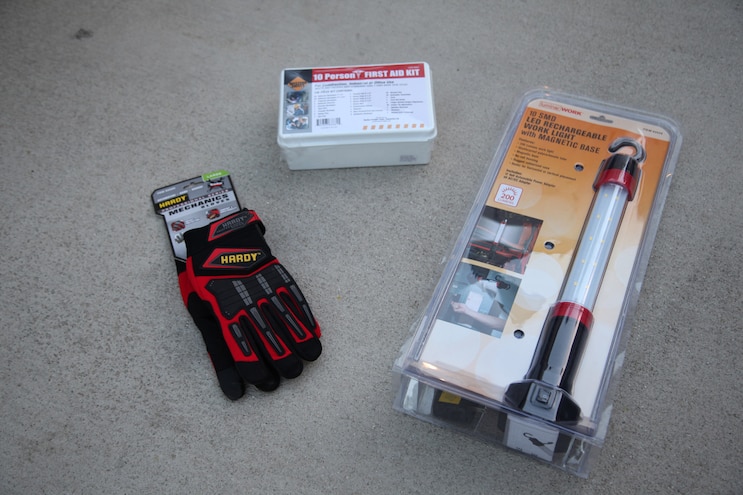 View Photo Gallery | 19 Photos
Photo 18/19   |   A few other items we picked up from Harbor Freight to load in the SwingCase were a set of new Hardy mechanic gloves, a rechargeable LED light (that can plug into the USB port on the shell), and a basic first-aid kit. Now, how are we going to fit all this in the truck? 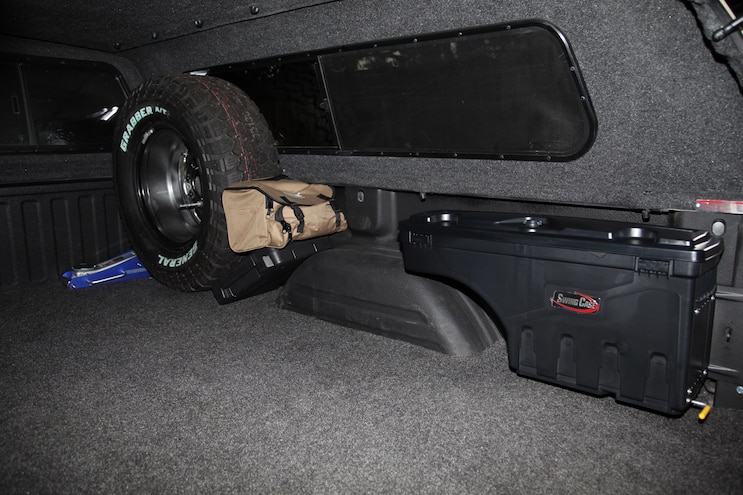 View Photo Gallery | 19 Photos
Photo 19/19   |   The jack wedged under the tire, the impact and compressor wedged in between the wheelwell and the tire, and the rest is in the SwingCase. It’s not too scientific, and some tie downs might be added for the trail, but for the last couple hundred miles nothing has moved. Stay tuned for the grand finale of Project Over/Under coming soon!