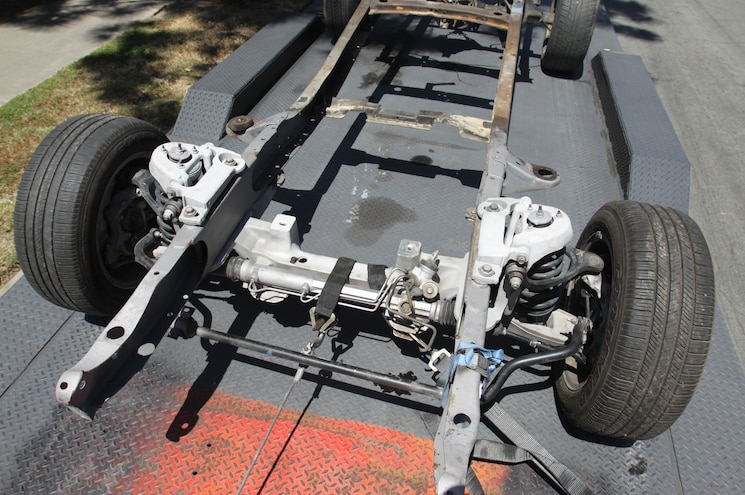 It was Elwood Blues in The Blues Brothers movie who made cop car parts cool with his famous line, "It's got ... cop tires, cop suspension, cop shocks ..." Who doesn't like cop car suspension? As it turns out, one of the most popular swap going these days is underpinning various classic trucks with the front suspension off of the venerable Crown Victoria, including the '67-'72 Ford F-100 vintage of our own Project Speed Bump.
Thanks to the shared 34-inch framerail spacing, the Crown Vic assembly is easily adapted to the 1967 Ford F-100 and is an affordable alternative for those on a tight budget. Swapping to a Crown Vic frontend nets the project vehicle coilover shocks, 12-inch vented disc brakes with twin-piston calipers, sway bar, rack-and-pinion steering, better handling than what could have ever been imagined with the old twin I-beam suspension, and an approximately 4- to 5-inch drop. Best of all, the whole hub-to-hub assembly unbolts from the donor vehicle with just 10 bolts and all of the serviceable parts are readily available at any auto parts store. The swap is proving popular enough that RideTech has even developed a height-adjustable, bolt-in coilover for the setup. 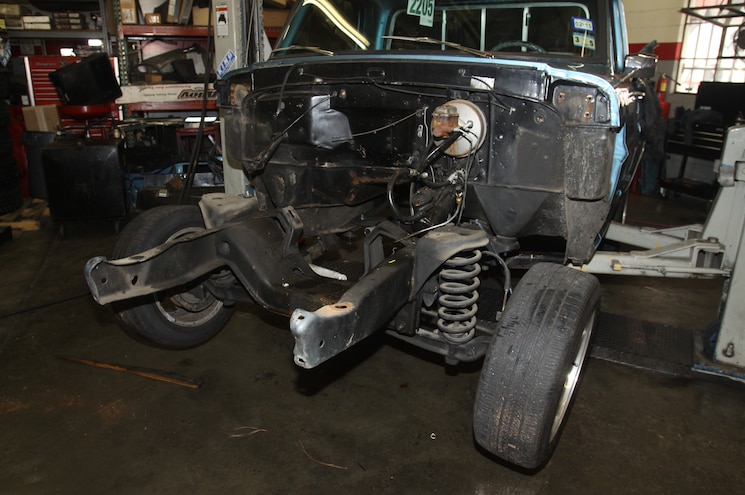 View Photo Gallery | 21 Photos
Photo 2/21   |   01 Our first order of business was to strip the truck of its tired 351 and the entire front clip. While it isn't necessary to take your truck down to this level of disassembly, it certainly makes the modification much easier.
Donor cars with the correct suspension for this swap are the '03-'09 Crown Vics, Mercury Grand Marquis, and Lincoln Town Cars, as well as '03-'11 P71s (Police Interceptors) and can be had for around $400-$750, depending on condition and location. Prices have been steadily going up over the past couple years, however, finding one has never been easier, as sellers have popped up on eBay who specialize in finding good assemblies and sometimes even include shipping. Local junkyards and Craigslist are other places where these can be sourced, but watch out for ones that came off of cars that have been driven hard and put away wet, as the beefy aluminum crossmember can develop stress cracks. Also shy away from any donor cars that were in a frontend collision. If you decide to go looking on your own, make sure the seller includes the entire hub-to-hub assembly, all 10 mounting bolts, uncut brake lines, calipers, discs, sway bar and bolts, and the rack with all of its lines, also uncut.
Keep in mind that while pre-'03 Crown Vics have a similar body style, the suspension is different and won't work. Also shy away from high-mileage PIs and taxis that are more likely to have served a much tougher life. If you have to have a PI with the stiffer spring rate, find one that served as the Chief or Watch Commander's car. Keeping in mind that that these are used components, your best bet, as always, is with a relatively low-mileage car. In fact, the frontend for this swap came off of a Mercury Grand Marquis that had less than 100K miles on the clock, driven by a little old man in Arizona. Perfect. 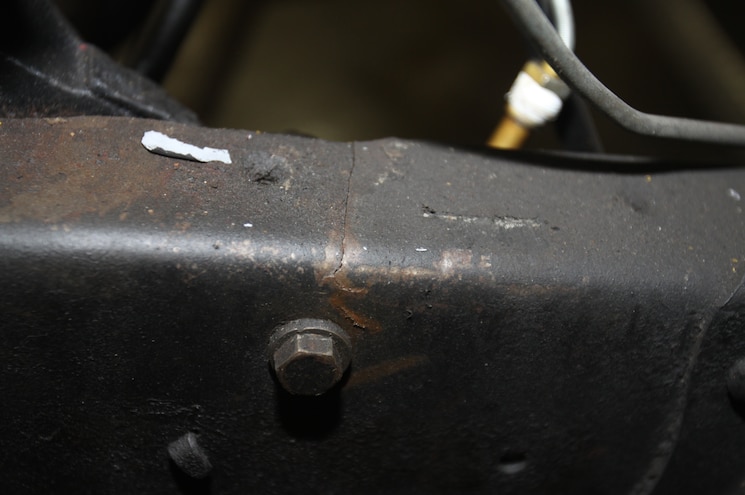 View Photo Gallery | 21 Photos
Photo 3/21   |   02 With the frame exposed, we noticed a crack where the steering box mounts—a fairly common problem on this vintage of Ford trucks.
Once you locate a good assembly, the next problem that will have to be solved is in regards to wheels and stance. The Crown Victoria setup is several inches wider from hub-to-hub over a stock F-100 with I-beams, but because of the big wheelwells, the trucks can swallow up the extra width easily with the right wheel and tire package. We've seen everything from stock Mustang wheels to custom, one-off rims filling the fenders. Purists should note that the larger brakes limit the smallest wheel diameter to 16 inches. Also keep in mind that the Crown Vic has a 5x4.5 bolt-pattern, while the Bumpsides came stock with a 5x5.5-inch bolt pattern. Solutions range from 5x5.5 to 5x4.5 wheel adapters on the rear to keep the wheels the same, redrilling the rear axles and drums for 5x4.5, installing the wider '80-'83 F-100 9-inch with the 5x4.5 pattern, using an Explorer 8.8-inch axle (narrower than the too-wide Crown Vic 8.8), or having a custom axle made. We'll share with you what direction we decide on in a future Project Speed Bump installment.
With OE quality, heavy-duty aluminum construction, and incredible parts availability, the Crown Vic swap is tough to beat for anyone looking for an IFS setup, especially on a budget. For our swap we headed to Off Road Evolution in Fullerton, California, for the installation. While ORE is known for insane off-road vehicle builds, they do amazing fab work for any vehicle and did an incredible job on Project Speed Bump. When everything was all said and done, we proved that you don't have to rob a bank to get cop car suspension on your truck. If you missed any of part 1 get caught up here: Project Speed Bump Part 1 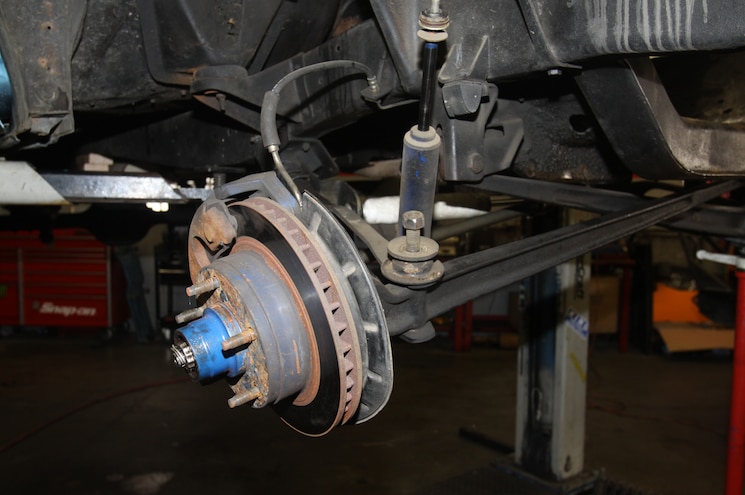 View Photo Gallery | 21 Photos
Photo 4/21   |   1967 Ford F 100 I Beam
03 Next it was time to say goodbye to our twin I-beam suspension. Our truck had been upgraded with discs at one point, and we were able to sell our front suspension to offset the cost of the Crown Vic assembly. Prior to removal, be sure to mark the centerline of your hubs on the frame. This will be your reference point for placement of the new suspension. 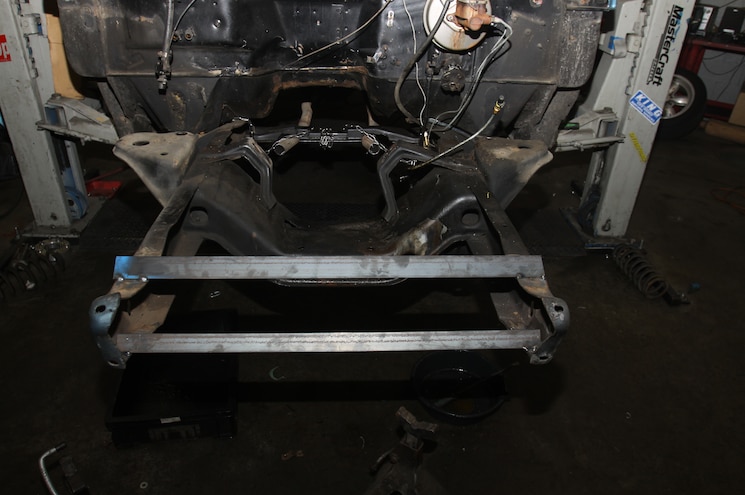 View Photo Gallery | 21 Photos
Photo 5/21   |   1967 Ford F 100 Frame Gusset
04 Before we could start removing the massive factory crossmember, we tack-welded some angle iron to the front of the frame to keep the rails from moving out of place. 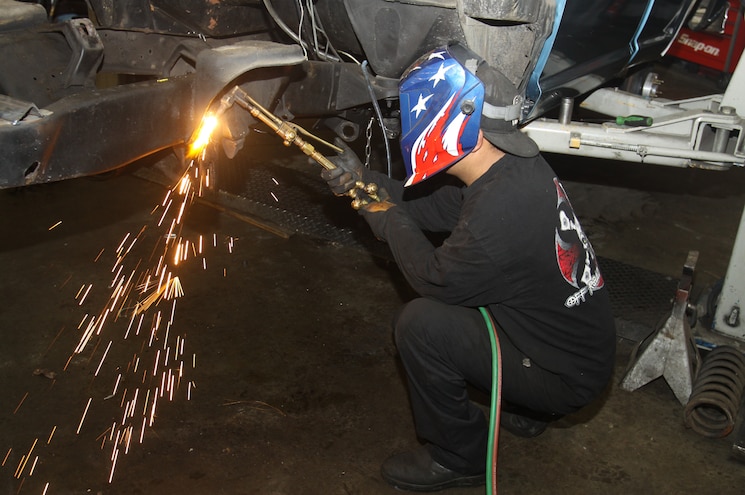 View Photo Gallery | 21 Photos
Photo 6/21   |   1967 Ford F 100 Torching Rivets
05 One of the most time-consuming parts of the process was torching, cutting, or drilling (your choice) the rivets holding crossmember in place and removing the coil buckets. 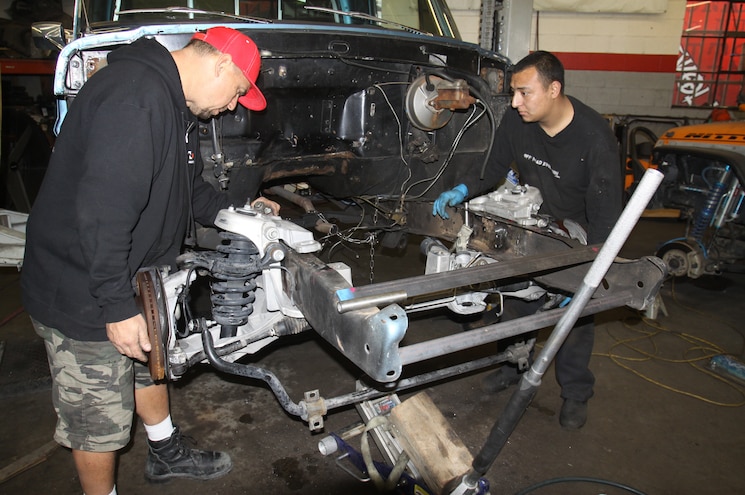 View Photo Gallery | 21 Photos
Photo 7/21   |   1967 Ford F 100 Crossmember Test Fit
06 After removing the coil bucket and crossmember, we test-fitted the new front end. There are diagrams available online for where the new crossmember should be placed, but you are in good shape if you keep the centerline of the new suspension inline with the stock hubs. For those who want to make a slight wheelbase change to clear larger wheels, this is the step where that must be decided. 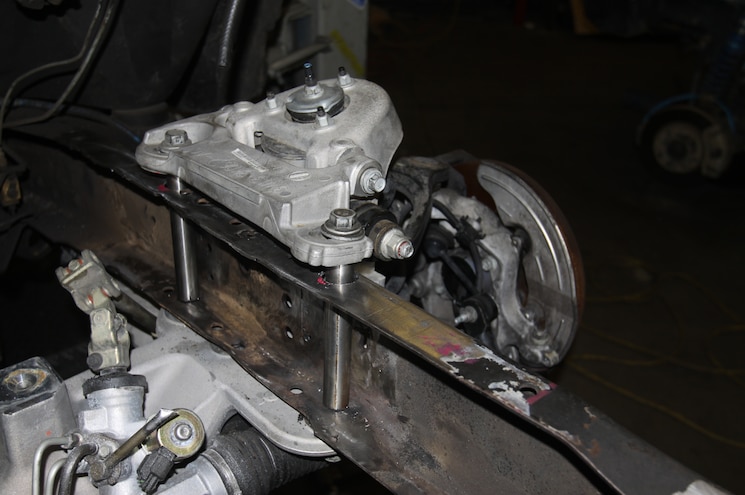 View Photo Gallery | 21 Photos
Photo 9/21   |   1967 Ford F 100 Bolt Sleeves
08 In this photo, you can see that while the F-100 frame width is correct for the Crown Vic assembly, the F-100 frame is actually too short. To properly support the new suspension, we cut bolt sleeves to match the height of the Crown Vic's crossmember brackets. 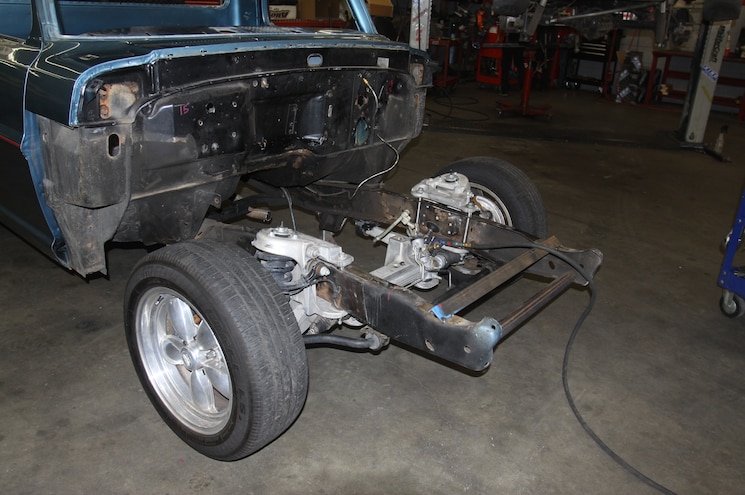 View Photo Gallery | 21 Photos
Photo 10/21   |   1967 Ford F 100 Sitting On Suspension
09 After all four holes were drilled and sleeved, we tightened the bolts and lowered the truck down, where it rested on the new suspension for the first time. 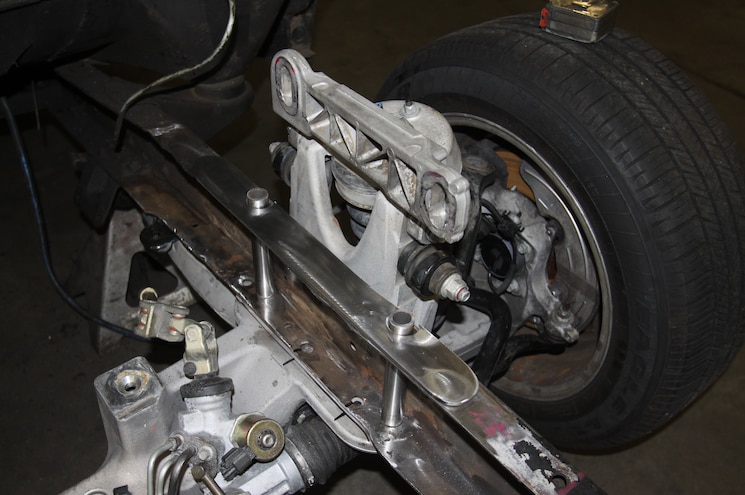 View Photo Gallery | 21 Photos
Photo 11/21   |   1967 Ford F 100 Frame Plates
10 To strengthen this section of frame to better match what is necessary for the IFS to work properly, stiffening plates were fabricated out of 3/16-inch steel plate. The rounded ends help to spread the load and decrease the chances of frame cracks forming from stress. 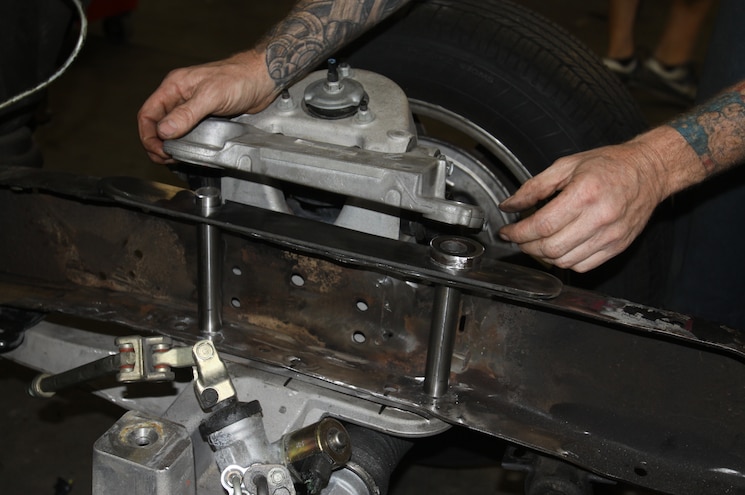 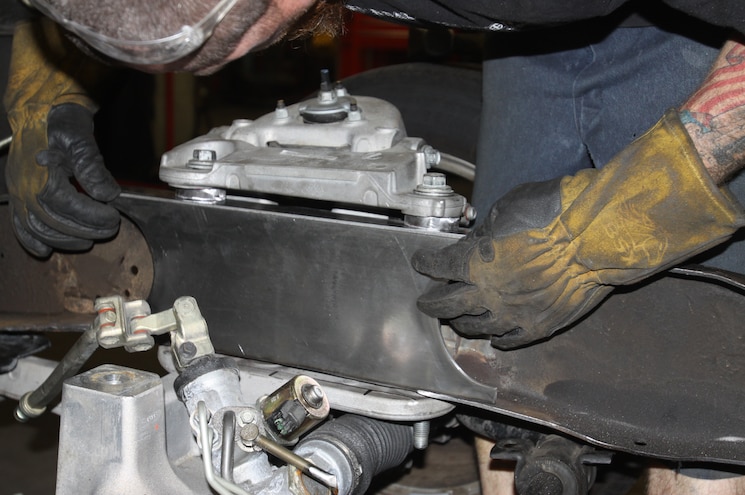 View Photo Gallery | 21 Photos
Photo 13/21   |   1967 Ford F 100 Boxing Plates
12 The last order of business was to create a 3/16-inch plate to box the frame. Notice the fish-mouth cuts on the end of the plates to allow the frame the ability to flex without causing a stress crack. 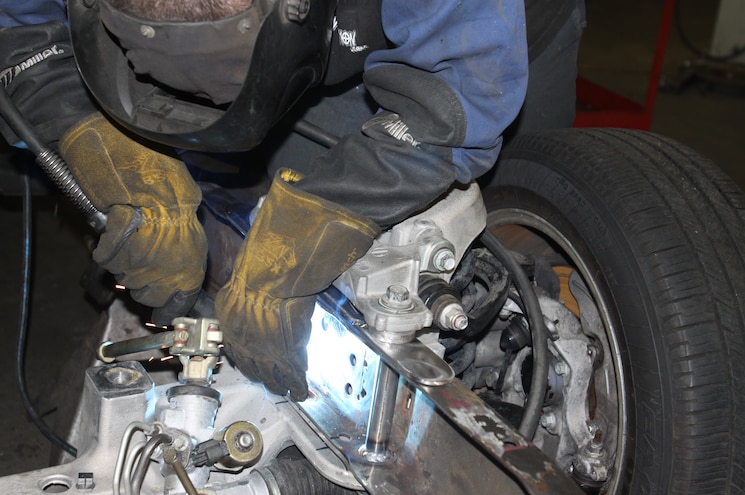 View Photo Gallery | 21 Photos
Photo 14/21   |   1967 Ford F 100 Welding Sleeves
13 Once all of the metal pieces for the crossmember were fabricated, it was time to start burning some metal. You can see the bolt sleeves being welded here. 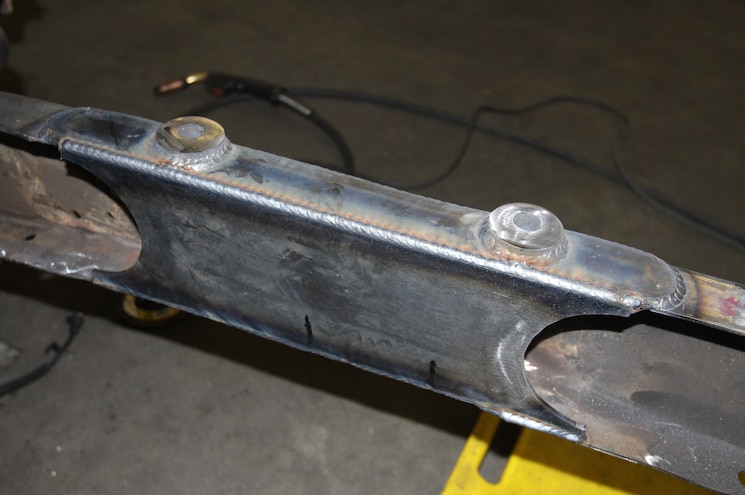 View Photo Gallery | 21 Photos
Photo 15/21   |   1967 Ford F 100 Boxed Rails
14 This is the final result after welding the new plates to the frame. We also filled in the spacers, giving a nice, even mounting surface for the Crown Vic crossmember bracket. 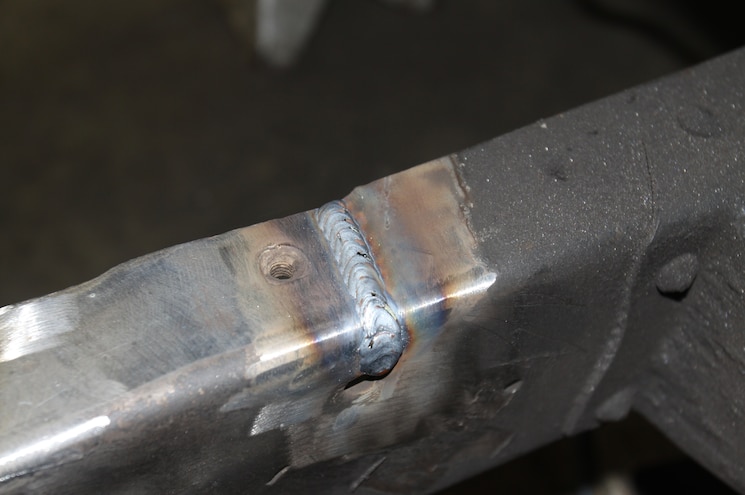 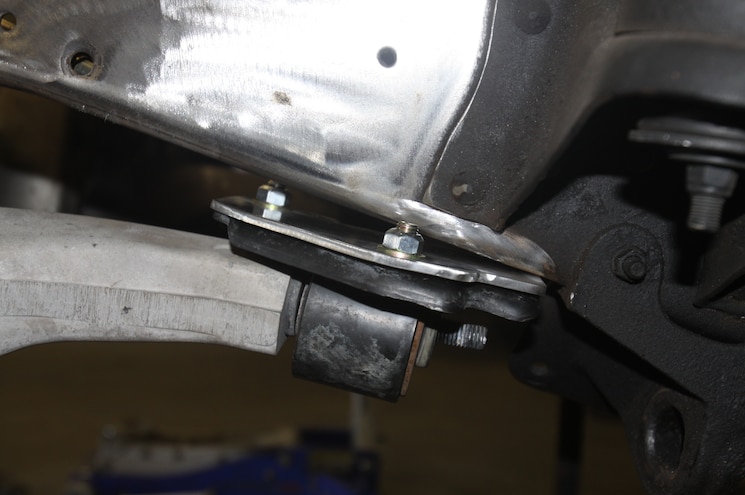 View Photo Gallery | 21 Photos
Photo 17/21   |   1967 Ford F 100 Control Arm Mount
16 The final piece of the conversion requires mounting the Crown Vic's lower control arms to the F-100 frame. As you can see here, the frame curves to the right where the lower control arms need to mount. 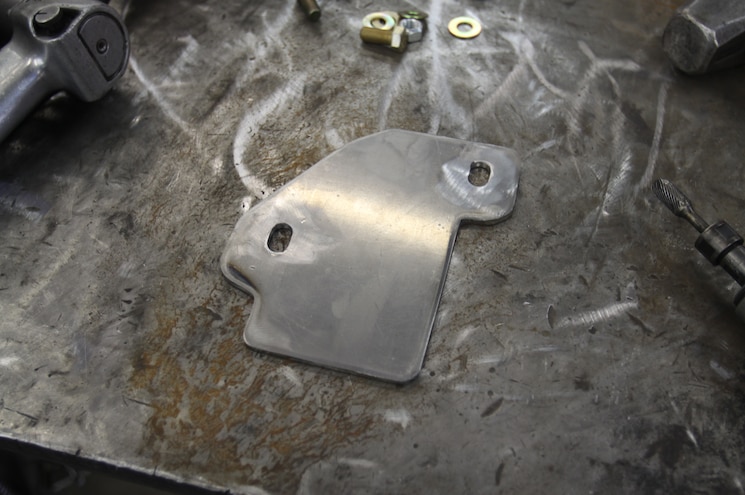 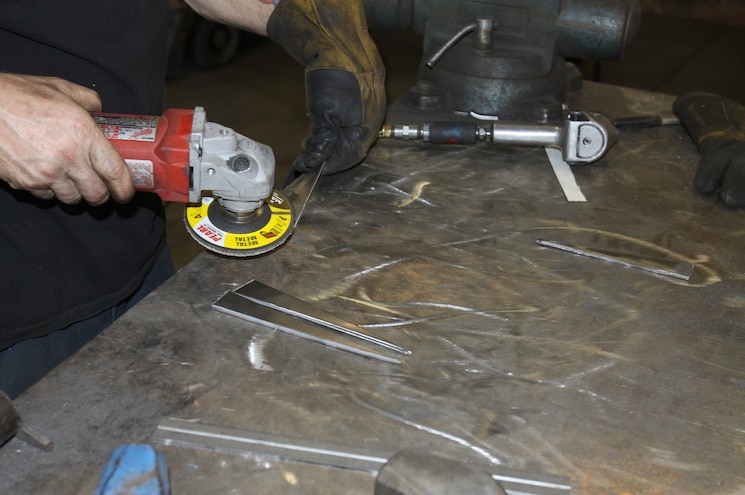 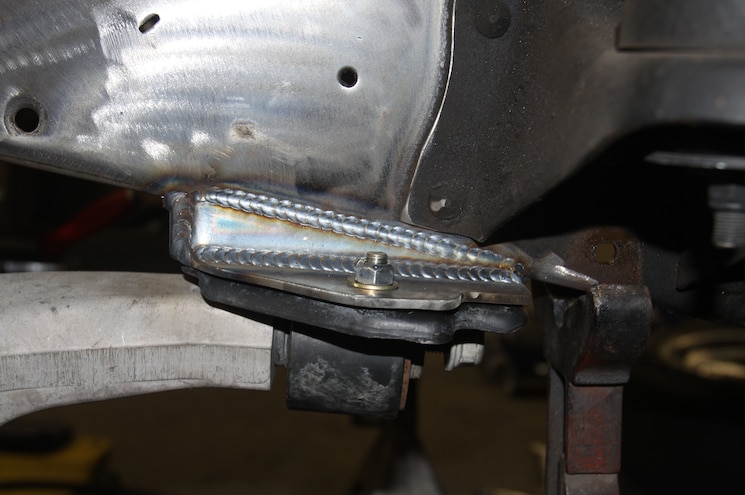 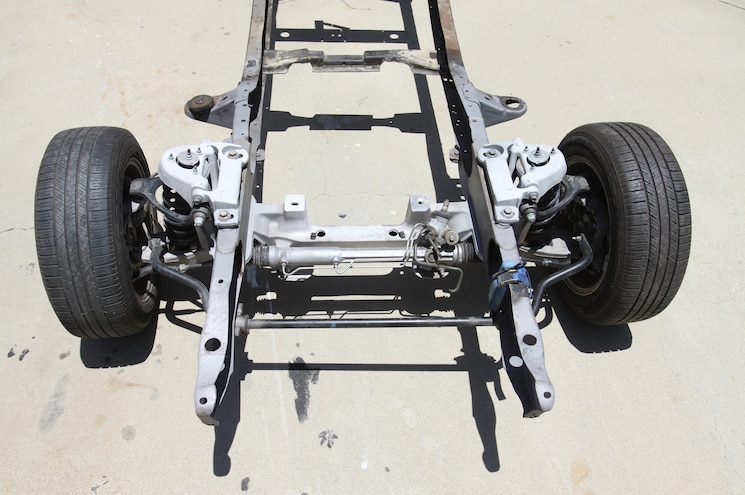