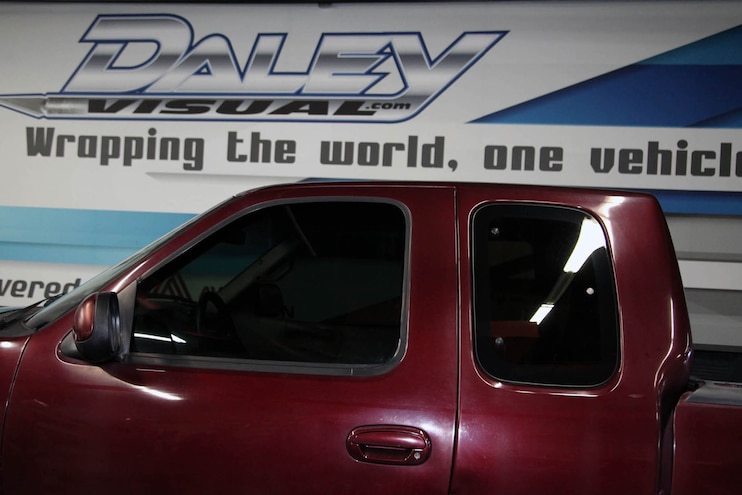 You may still remember a few years back when we dragged this beaten-down 1997 Ford F-150 Lariat out of the parking lot and got it back on the road. This is the very truck that Ford delivered to Motor Trend Magazine back in 1996 for testing, and subsequently won the coveted Truck of the Year award for '97- the first year of this body style, and somehow the truck has remained a member of the staff ever since. After seeing it abandoned in the parking lot, Truckin commandeered the F-150 and brought it back to life with a minor overhaul, and it has served us well as a parts hauler and occasional tow vehicle. As we mentioned in the last installment, where we completely revamped the interior at TMI, we recently jumped in the truck to find that the head unit had been stolen, along with a few other odds and ends. The battery was also totally dead. And that is what precisely what prompted another series of upgrades to our workhorse. We never liked the clear door glass on this truck, especially with the Super Cab windows and rear glass being so dark, which is factory by the way. We figured that a little privacy and UV protection would help protect the new upholstery, and maybe even make the truck slightly less inviting for future break ins. 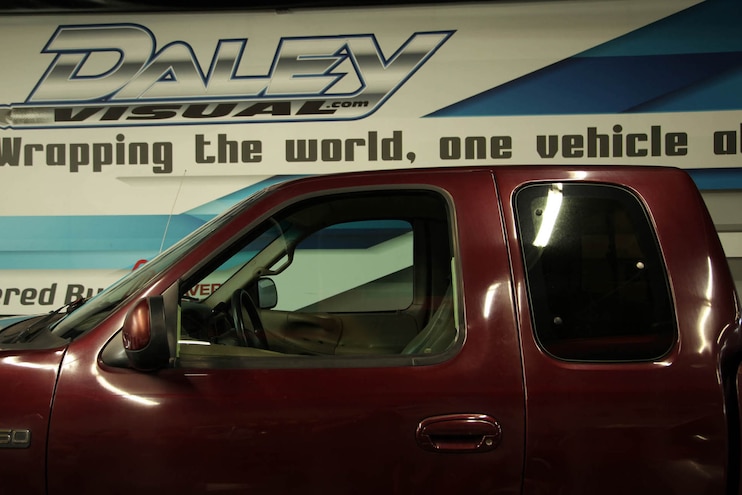 View Photo Gallery | 26 Photos
Photo 2/26   |   As you can see, there is a stark contrast between the crystal-clear door glass and the factory tinted Super Cab glass. This is what we set out to remedy. We pulled the truck into the shop at Daley Visual and we got to work.
When it comes to window film, or "tint" we always just thought there were two kinds. The stuff that turns purple after a year, and the stuff that doesn't. but there has been a lot of advancement in this industry in recent years, and one of the big players is Dub IR Luxury Window Tint. DUB IR film is made from advanced nano-ceramic laminated film that is scratch resistant, non-reflective, and supremely easy to apply and shrink. Color stable construction gives true color and the non-metal construction provides enhanced UV protection. The film will actually help both driver and passengers feel cooler, while being protected from those damaging rays of the sun. Dub IR film is even guaranteed against fading, peeling, cracking, adhesive failure and delamination. With our materials handled, we just needed to get over to our installer to apply it.
Daley Visual is a well-known name in the vinyl wrap business, and we have worked with them many times in the past. What you may not know is that in addition to vinyl wraps and graphics, they do all sorts of other outfitting and accessorizing of trucks- including window tint. Josh and the crew provided quick, expert installation, and it wasn't long before we were back on the road.
We've got a whole bunch more in store for our old F-150, so make sure and check back for our next installments, and check out the websites in the source box to learn more about tinting the glass in your truck. 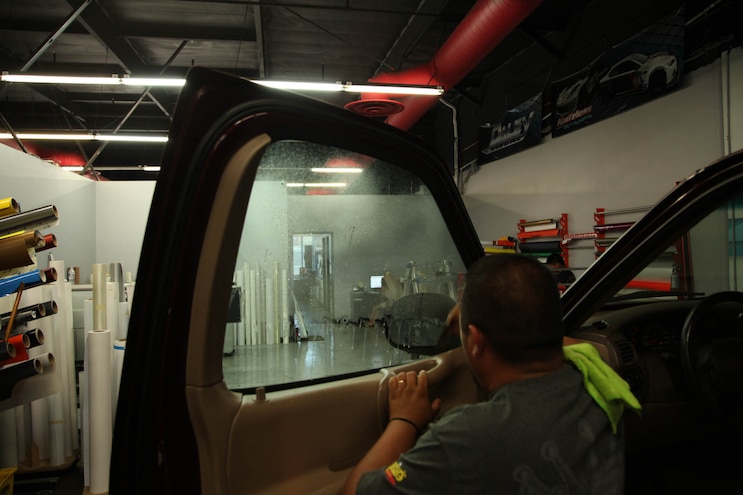 View Photo Gallery | 26 Photos
Photo 3/26   |   1997 F150 Daley Visual Tint 2
New trucks have dirt in every nook and cranny. Old trucks are 100 times worse. The job begins with a thorough spraying, razor blading, and wiping down of the glass-inside and out. All of the surrounding rubber is cleaned up, too. It only takes a few little contaminants between the glass and film to turn an expert job into a mediocre job. 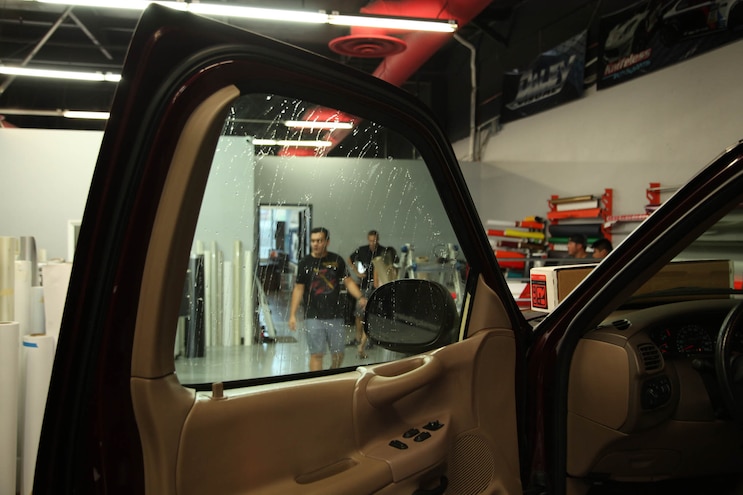 View Photo Gallery | 26 Photos
Photo 4/26   |   1997 F150 Daley Visual Tint 3
Soon, both sides of the glass were clean. Even still, the glass and rubber will be sprayed and wiped down a few more times before the job is complete. 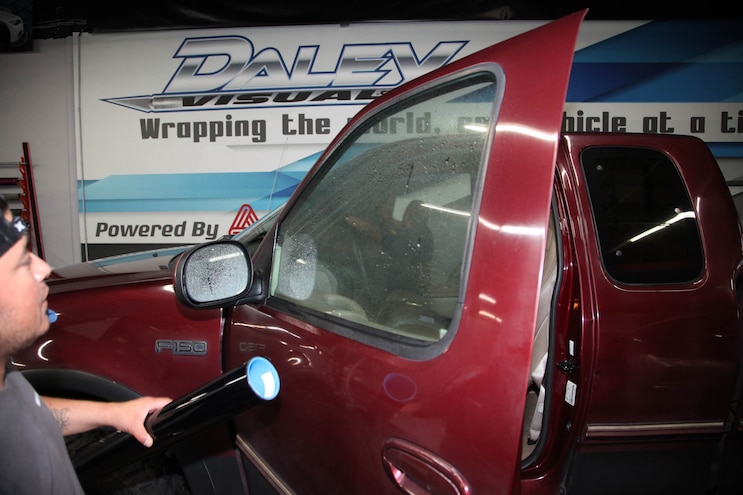 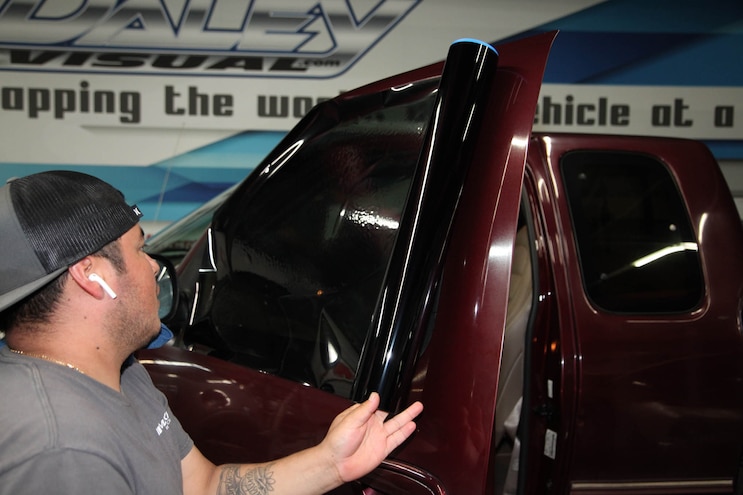 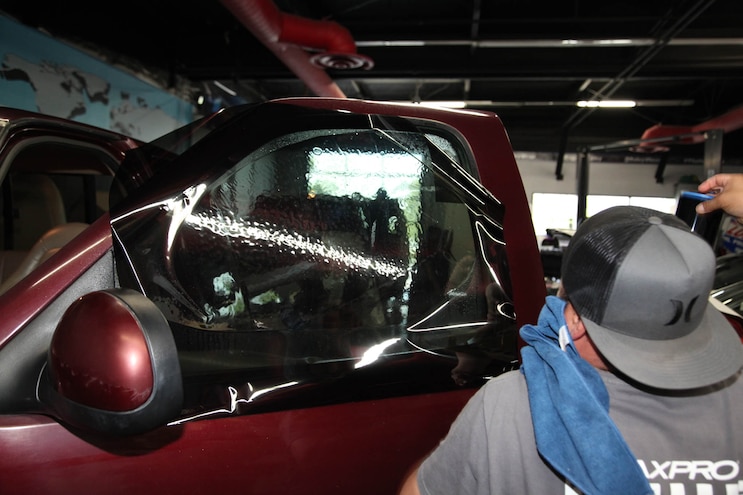 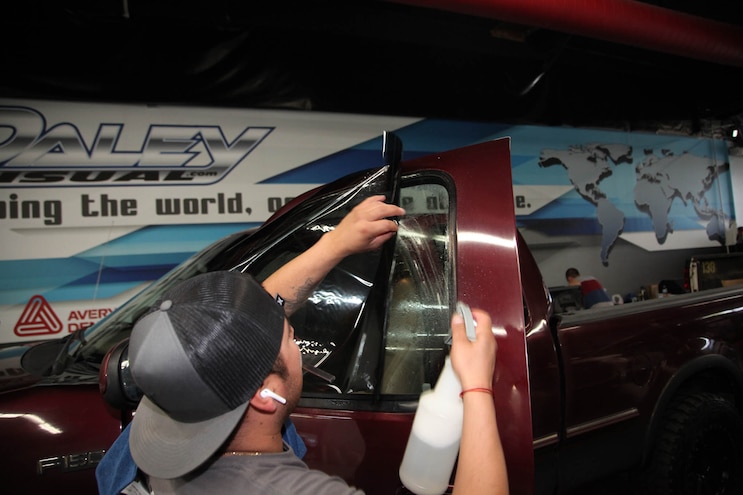 View Photo Gallery | 26 Photos
Photo 8/26   |   1997 F150 Daley Visual Tint 7
Even more solution is sprayed so the film will stick into place. The solution is usually a few drops of plain dish soap and water. 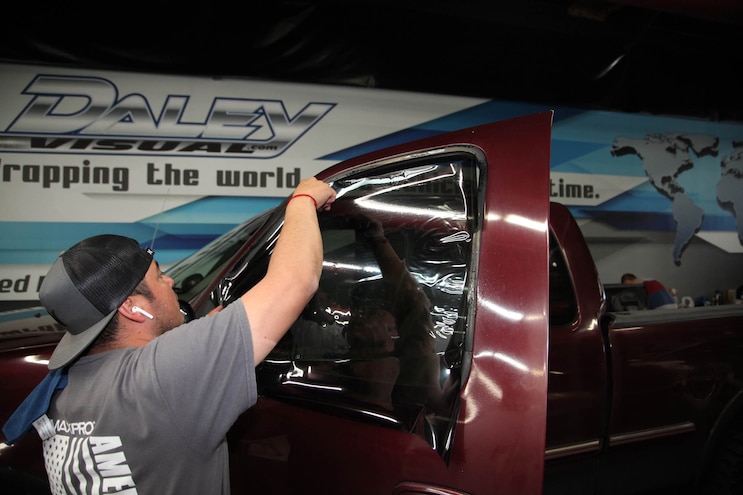 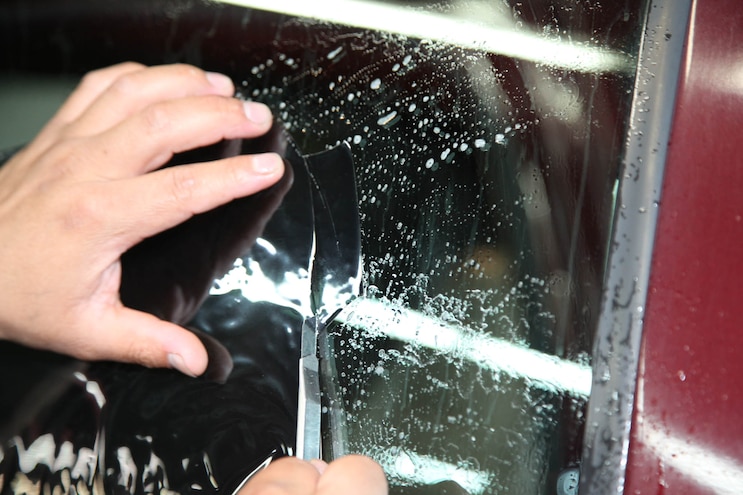 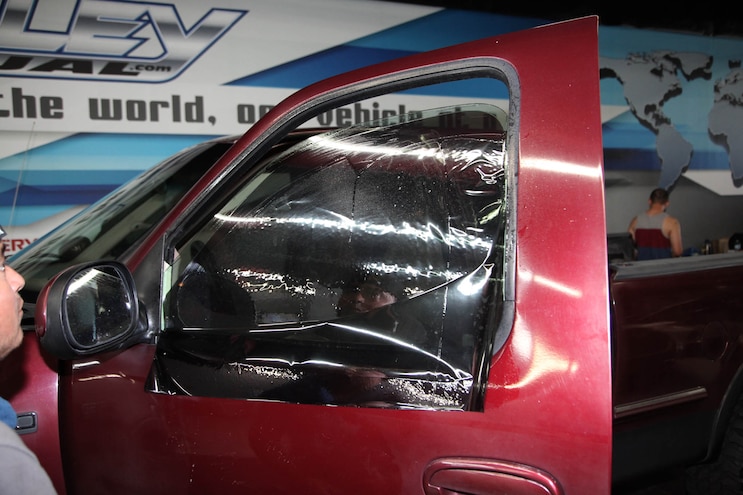 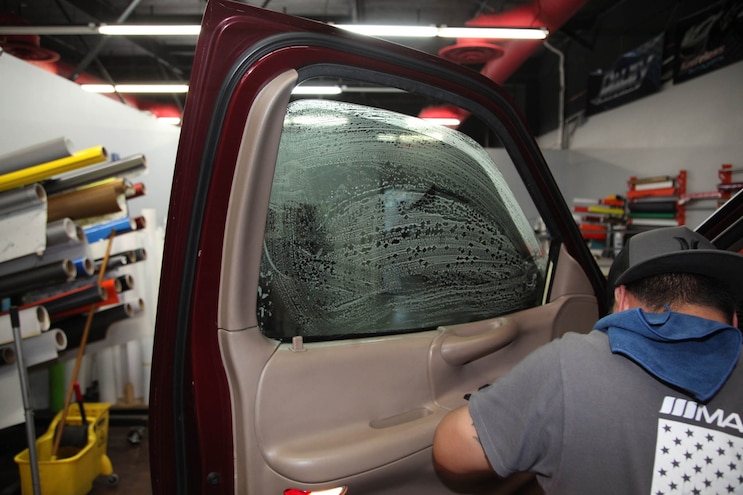 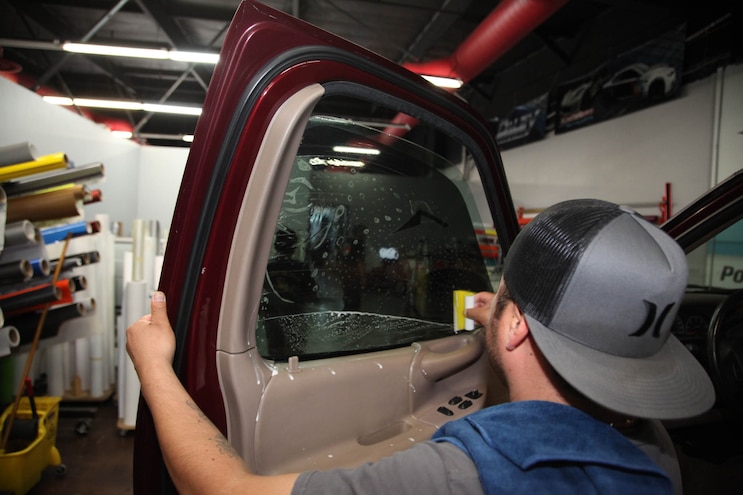 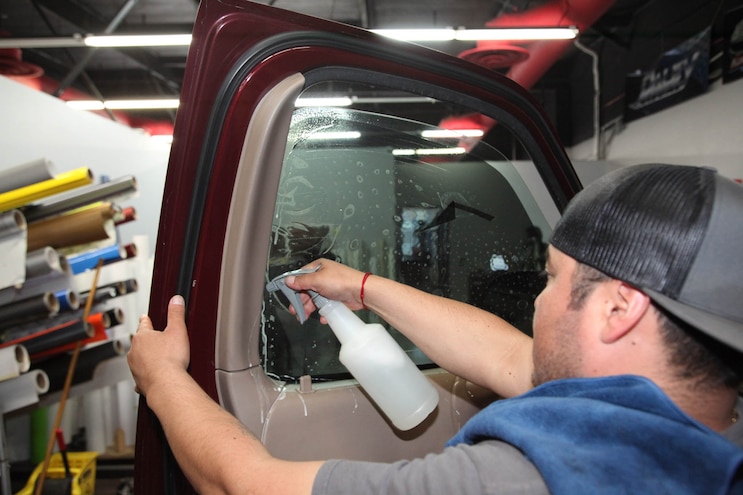 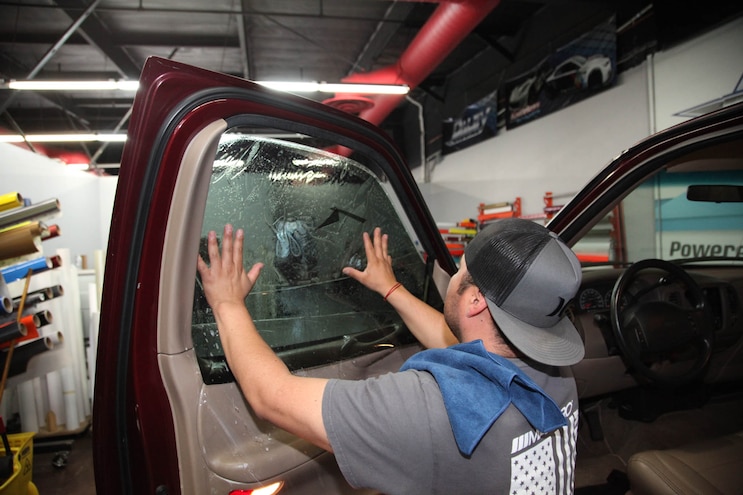 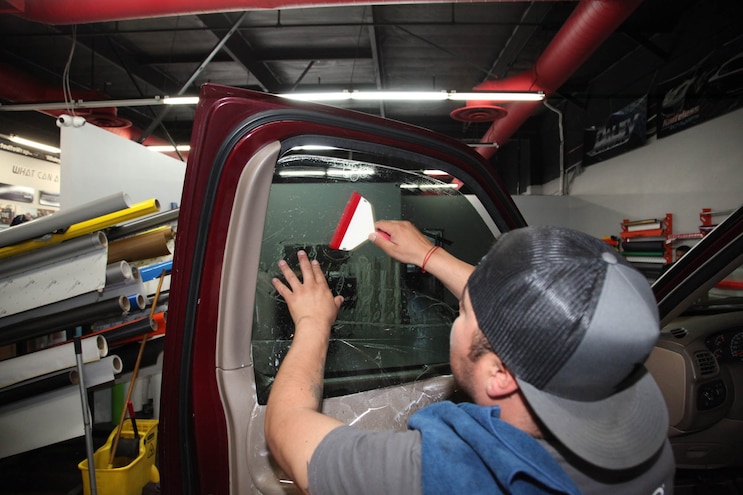 View Photo Gallery | 26 Photos
Photo 16/26   |   1997 F150 Daley Visual Tint 15
With the film lined up perfectly with the top of the glass, the top area was squeegeed until all of the water and bubbles are worked out the edges. 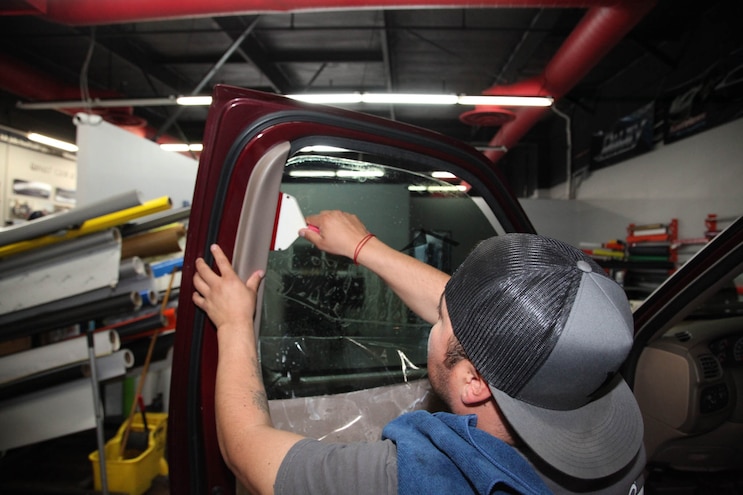 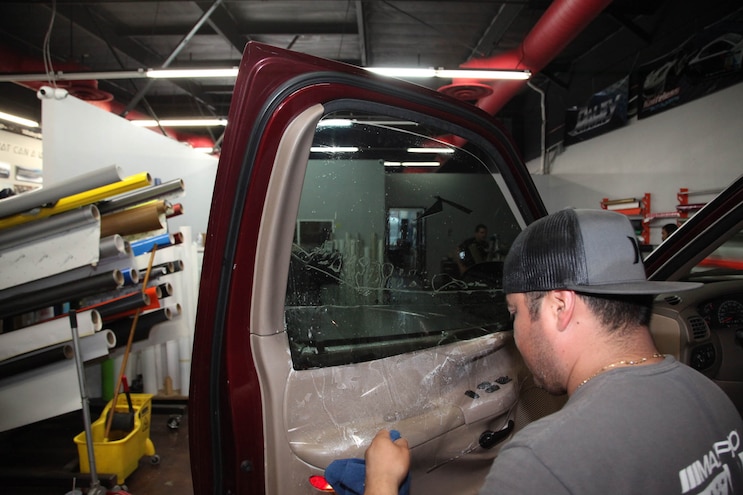 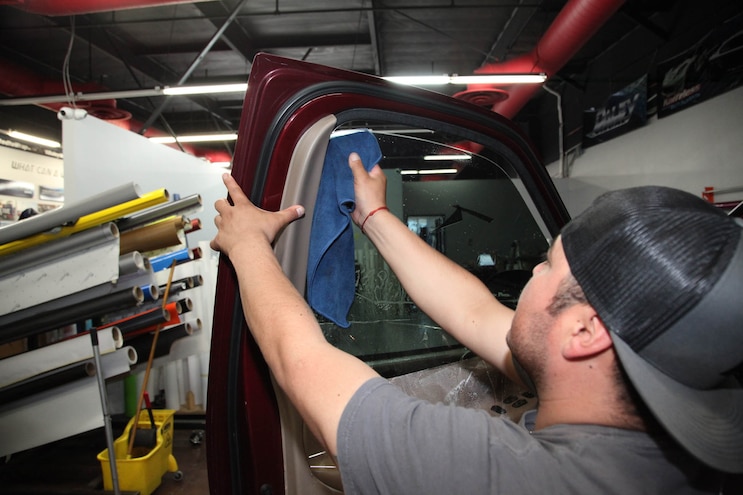 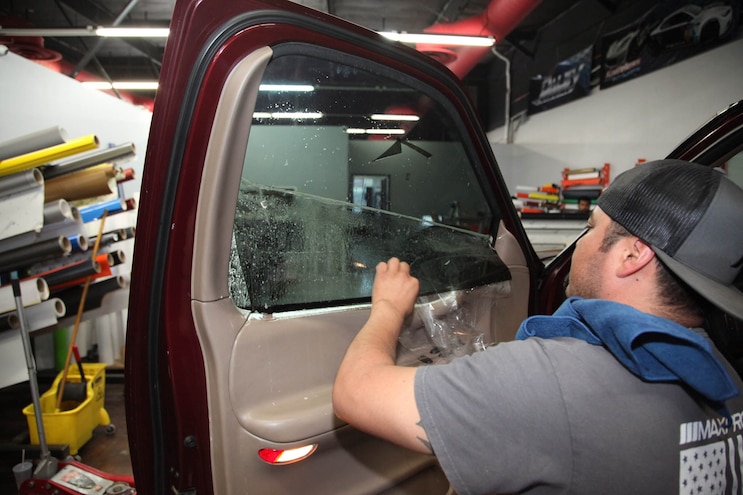 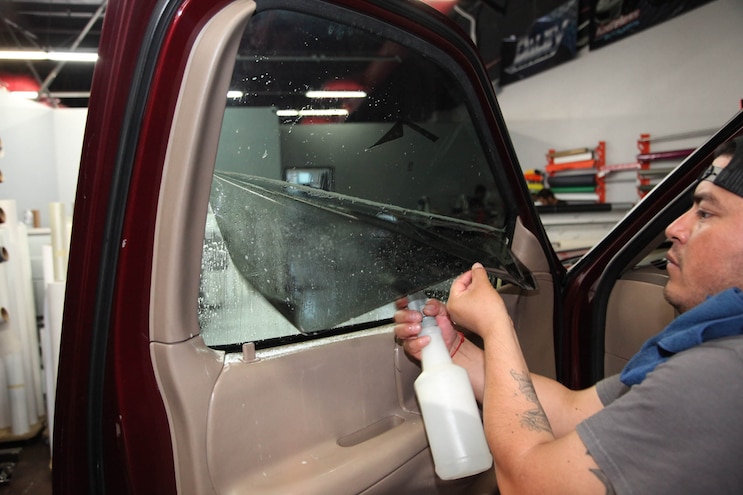 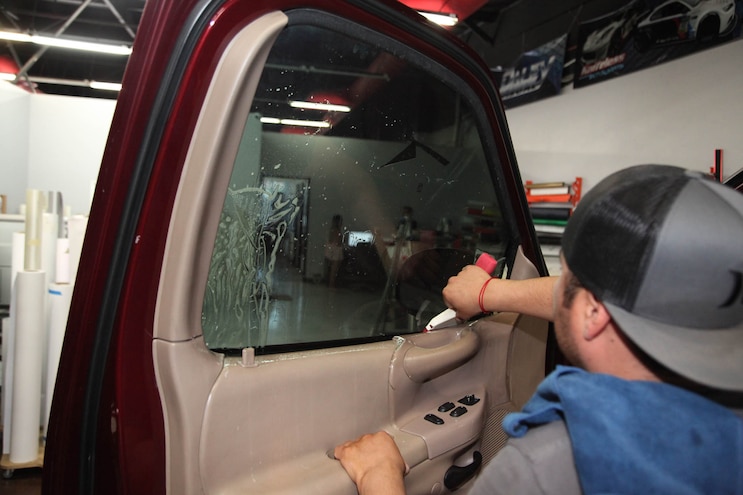 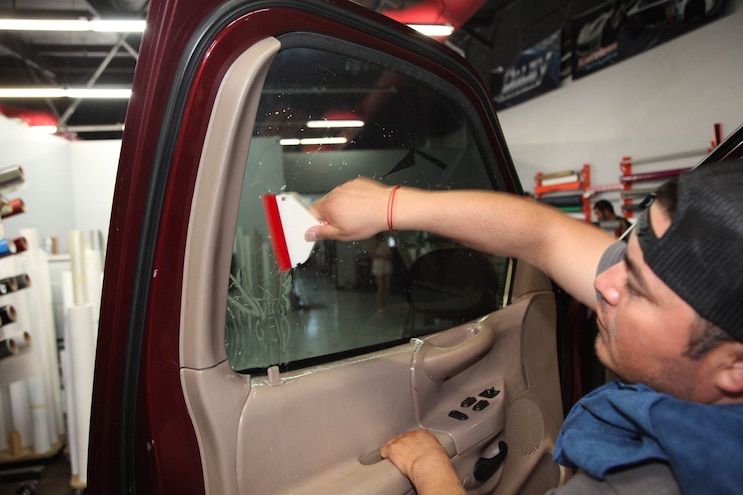 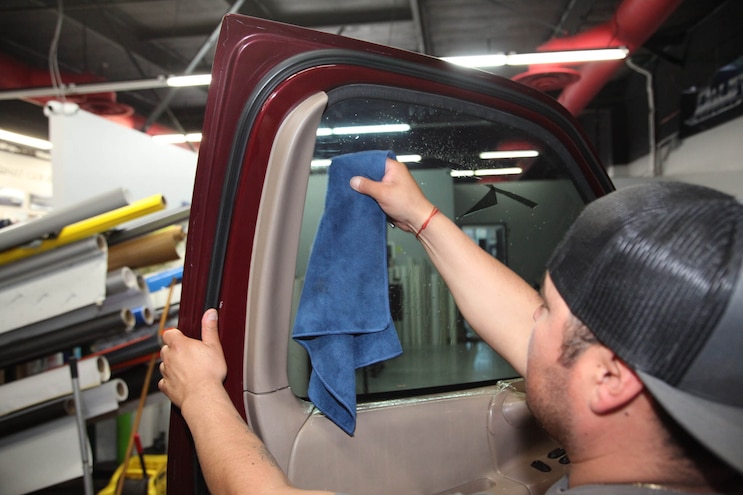 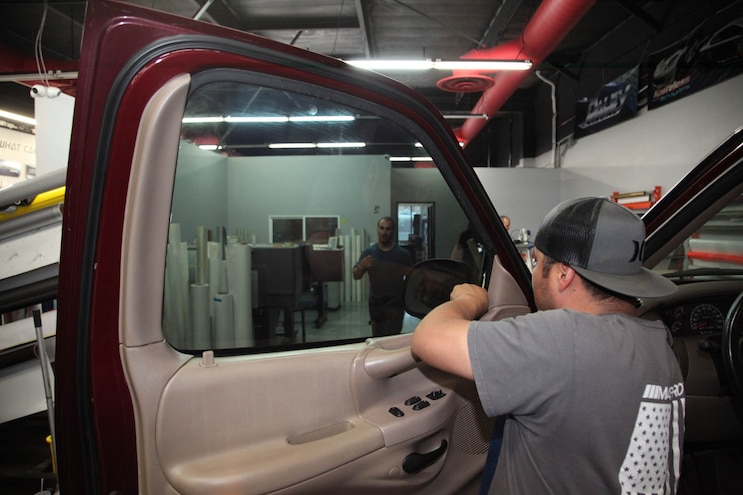 View Photo Gallery | 26 Photos
Photo 25/26   |   1997 F150 Daley Visual Tint 24
We checked all the felts and film edges once more before moving on to the other door. It recommended that you wait 24-48 hours before rolling the windows down, just to make sure the film is adhered properly, Afterall, its just a big, clear sticker! 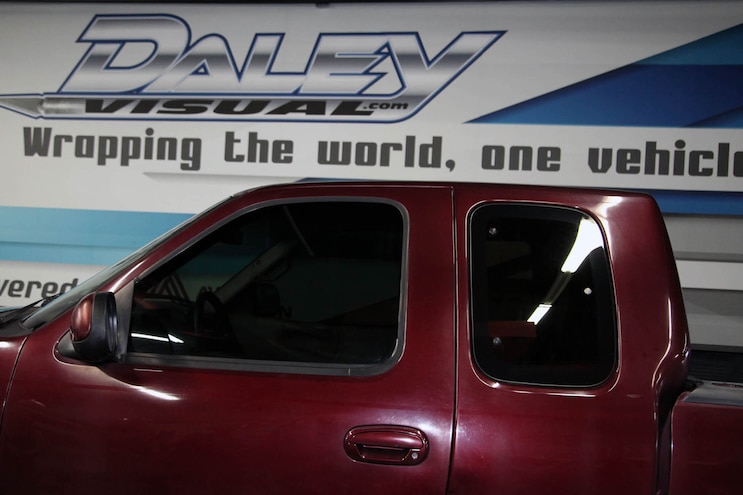 View Photo Gallery | 26 Photos
Photo 26/26   |   1997 F150 Daley Visual Tint 25
Our goal of having some privacy and matching the rear glass was met. In fact, it was near perfect, thanks to Daley Visual and their stellar work. Check back soon to see what else we have in store for the TOTYl Ressurection Ford!

Truckin
Truckin
how to
Window Tinting Install with Dub IR Film at Daley Visual
You may still remember a few years back when we dragged this beaten-down ...
Jeremy Cook – Feb 19, 2020
Truckin
Truckin
how to
We Install a Front Runner Low Profile Roof Rack on a 2014 Toyota Tundra
More on this 2014 Toyota Tundra Project! Trail Ready Tundra: Part One Our...
Jeremy Cook – Feb 11, 2020
Truckin
Truckin
features
2003 Chevy Silverado- Project Over/Under
We’re finally calling it done. The $500 work truck we picked up well over a year ago has had all m...
Team Truckin – Oct 21, 2019
Truckin
Truckin
how to
1971 Chevy Suburban- Project Rebirth‘71 Suburban, Part 5: Heard but Not Seen
Our project 1971 Chevy Suburban is well on its way to becoming a reliable...
Bryan Fross – Aug 21, 2019
Join Our FREE Truck Trend Network Newsletter