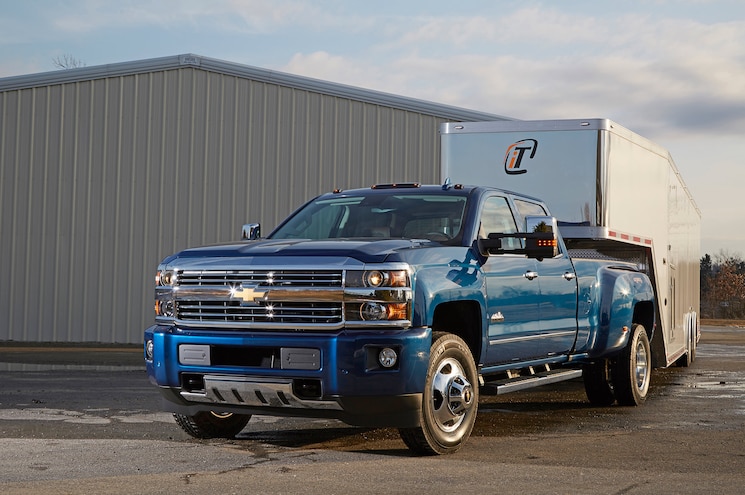 We’ve seen it a hundred times: a novice trailer tower gets into a situation where he or she needs to back up a truck with a trailer attached. Before selecting “R” on the transmission shifter, there is a long pause while this person tries to mentally prepare for what comes next. The grip on the steering wheel tightens, knuckles turn white, pupils dilate, sweat starts to form on the brow, and the mental game of which way to turn the wheel starts to creep into his or her driving psyche. We’ve even seen these people give up to have someone with more experience take the reins.
The auto industry is characterized by constant change. Sometimes, the changes are minor, like the addition of a new color or a new grille design. Other changes are more significant and can leave buyers kicking themselves for not holding out another year to get the bigger, better, cooler feature. When it comes to this scenario—and trailer towing in general—not since the advent of the backup camera have we seen such advancements in towing technology. Both Ford and GM are aiming to make the towing experience a better one, although they’ve taken vastly different approaches. The ’16 model year brings us an ingenious way to back up a trailer from Ford, and an extra set (or six) of eyes from GM. In an effort to get to know these systems better, we got our hands on an example of each, hitched up trailers, and gave them a spin. 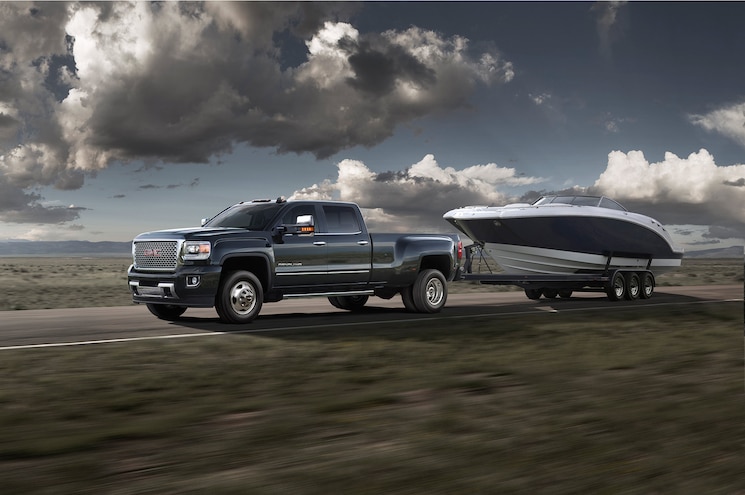 View Photo Gallery | 13 Photos
Photo 2/13   |   Pickup Truck Towing Boat
GM’s Trailering Camera System
GM is offering owners of ’14-to-current Silverado and Sierra 1500, 2500, and 3500 trucks a cool, integrated trailering camera system that will work with all trucks equipped with the available trailer-towing mirrors.
Codeveloped with Echomaster, the system includes two cameras integrated into the sideview mirrors and a third wireless camera that mounts onto the rear of the customer’s trailer to provide full visibility behind the trailer. These work in conjunction with the truck’s tailgate and CHMSL-mounted cameras. Similar to Honda’s Lane Watch system, when the driver activates either the left or right turn signal, the corresponding camera sends a live video feed into the center screen. The system can also accommodate an optional fourth camera that can be mounted anywhere the driver wishes, including inside the trailer, if transporting livestock or other sensitive cargo. Views of any of the cameras can be activated at any time by the driver, and the lane change function can be disabled when a trailer is not attached.
While our time with the system was brief, it was nothing but enjoyable. The mirror-mounted cameras give a perfect view of your trailer relative to where curbs and other obstructions may be. They also provide a second view of the truck and trailer’s blind spot, ensuring safe lane changes. While wireless in the sense of connectivity to the truck’s head unit, the camera for the rear of the trailer needs to be wired to the trailer’s lighting system. This provides power to the unit and activates the wireless signal transmission. When we tested it on our 43-foot gooseneck trailer, we had no signal loss issues due to length or obstruction.
The system is available through Chevrolet and GMC dealers and starts at $999, excluding tax and installation. And if you don’t already have towing mirrors, expect to pony up for those as well. 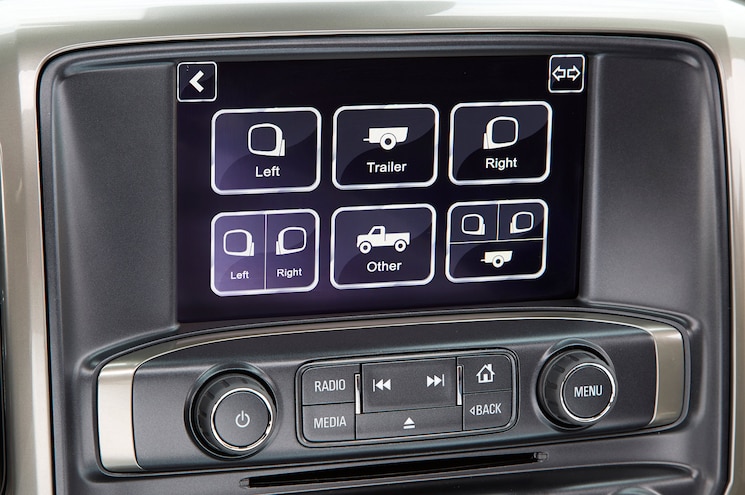 View Photo Gallery | 13 Photos
Photo 3/13   |   Inside the truck, the different camera views are selected by pressing the home button for five seconds, which brings up this screen. From here, you can view each camera individually, or together in different split-screen combinations. 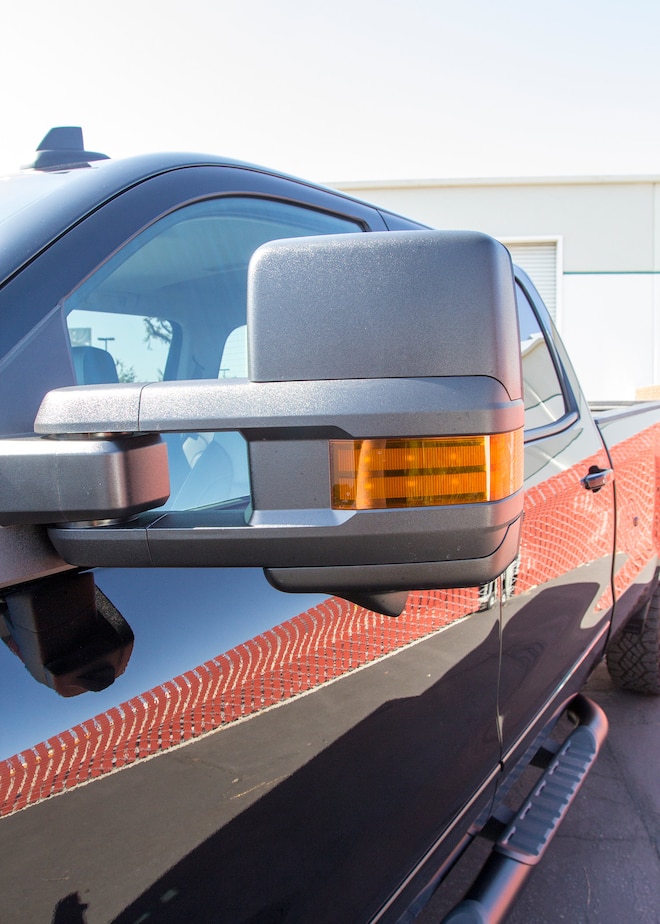 View Photo Gallery | 13 Photos
Photo 4/13   |   Assuming you have the optional trailer-towing mirrors, the system’s sideview cameras are installed on the bottom of them. If you don’t have the towing mirrors, they too can be purchased and retrofitted. 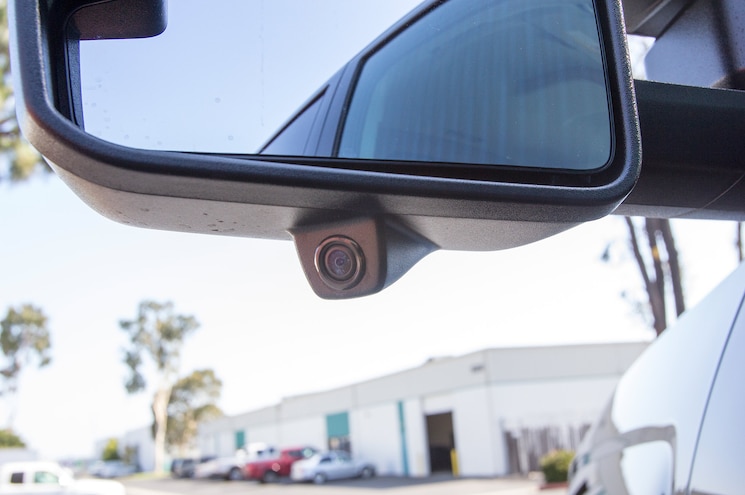 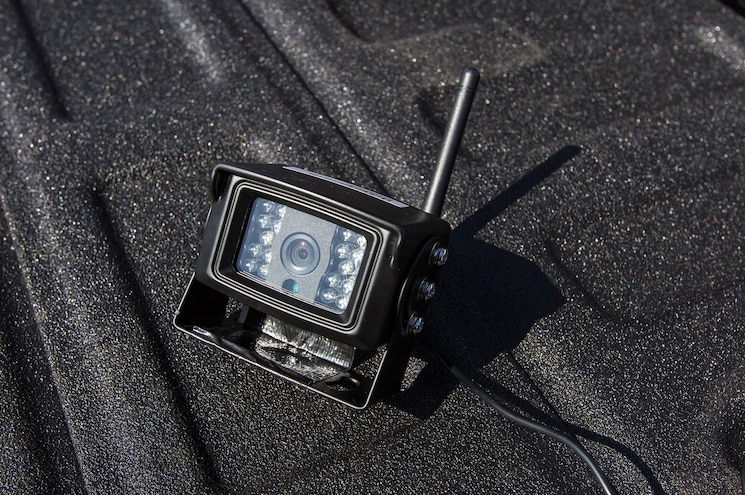 View Photo Gallery | 13 Photos
Photo 6/13   |   With the kit comes one wireless camera for placement wherever you choose (though GM suggests its use as a rearview camera on the back of your trailer). A second one can be added to the system, and multiples can be purchased and synced with the system if you have more than one trailer. 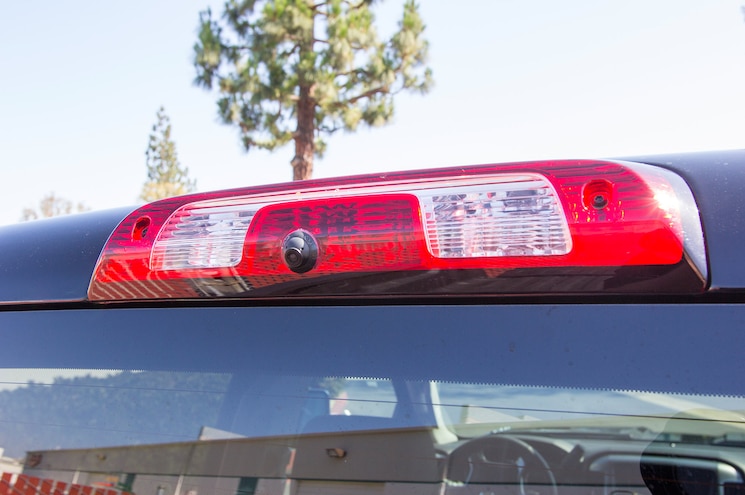 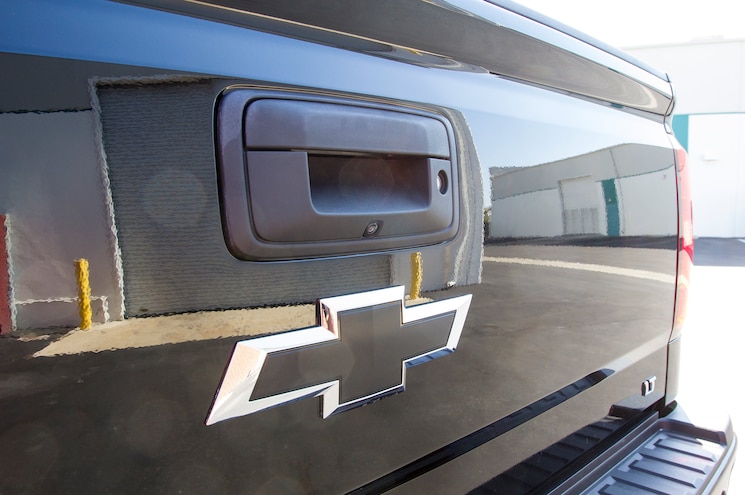 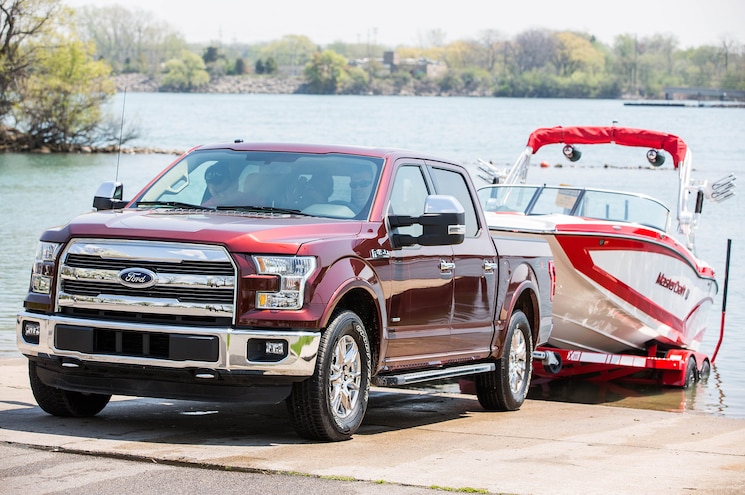 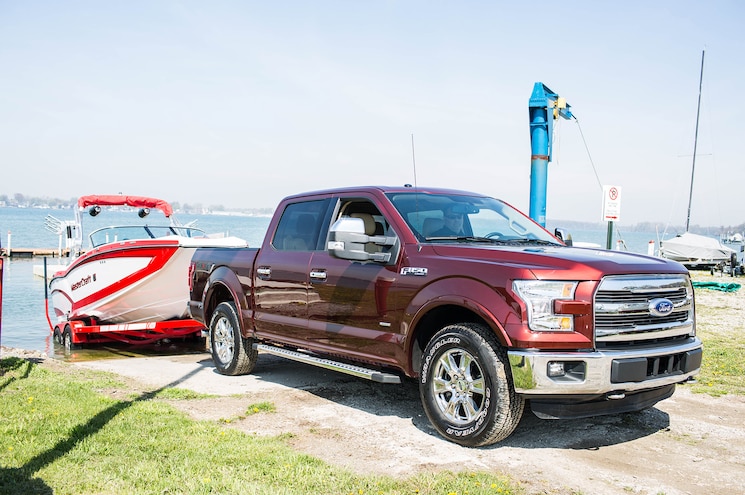 View Photo Gallery | 13 Photos
Photo 10/13   |   Red Ford Pickup Truck Towing Boat Side View
Ford’s Pro Trailer Backup Assist
Having heard the desperate cries from novice truck owners everywhere, Ford has developed a new technology where backing a trailer no longer has to be an intimidating part of truck ownership. Marketed as Pro Trailer Backup Assist and launching on the ’16 Ford F-150 in all trim levels as part of the trailer tow package (save for the XL, where it can be had á la carte), Ford’s latest technology will allow anyone the ability to safely and competently back up a trailer.
Utilizing the backup camera, electric steering, and other sensors, Pro Trailer Backup Assist adds a sole control knob above the trailer brake controller to the interior of the truck. After a brief setup with a trailer, the system is engaged using the on/off button in the center of the control knob. Once ready, it’s as easy as working the throttle and brake, while steering with the knob—hands completely off the wheel. The system has the ability to keep a trailer backing up straight, despite bumpy or crowned surfaces, and will steer the truck, based on the driver’s inputs to the knob. If released, the knob returns to center and will straighten out the trailer and tow vehicle.
To protect the truck and trailer, Pro Trailer Backup Assist incorporates safeguards that will prevent the trailer from getting into an angle from which it can’t recover and saving the rig from a jackknife situation or from going too fast. The system also detects hands on the wheel and, sensing a driver intervention, will return full manual control to the driver immediately.
The technology works by attaching a special sticker “target” to the tongue of the trailer, then applying four crucial measurements used in the Pro Trailer Backup Assist algorithm. The measurements are: 1) The distance from the license plate to the center of the ball. 2) The distance from the ball to the sticker. 3) The distance from the camera lens to the center of the sticker. 4) The distance from tailgate to the center of the axle (or pivot point of multi-axle trailers). These measurements are entered through the Driver Information Center and, once completed, are assigned to a trailer that can be named by the driver.
A crucial part of the system, the supplied sticker, might not look like much, but it is an engineering marvel in its own right. Designed to be effective in all weather and light conditions, the sticker features both matte and gloss finishes and has even undergone extensive durability testing against peeling, cracking, and even UV fading.
We spent a few days in a ’16 F-150 Sport towing a 7,500-pound load that included a vehicle strapped down to an 18-foot flatbed trailer. Equipped with the 2.7L EcoBoost V-6 engine, our truck was right at the limit of its capability. However, we were most interested in the Pro Trailer Backup Assist function. Interestingly, our test vehicle was not equipped with a trailer brake controller, which struck us as odd given the Pro Trailer feature.
After entering the measurements, we began with a simple straight-line backup test, which the truck performed flawlessly. From there, we tried more complex maneuvers, which, with years of towing experience under our belts, took quite a bit of getting used to. At first, we brushed the system off as just a gimmick for small boat trailers, but by the end of our time with it we were believers. Having finally mastered the system, we seamlessly backed our trailer into its tight parking spot seemingly easier than ever before.
Pro Trailer Backup Assist is relatively inexpensive, adding only $395 to the cost of an F-150, given that a towing package box is already checked. Unfortunately, due to the use of electronic power steering, this feature will be relegated to only the F-150 for now, as Super Duty still uses a traditional hydraulic steering system. 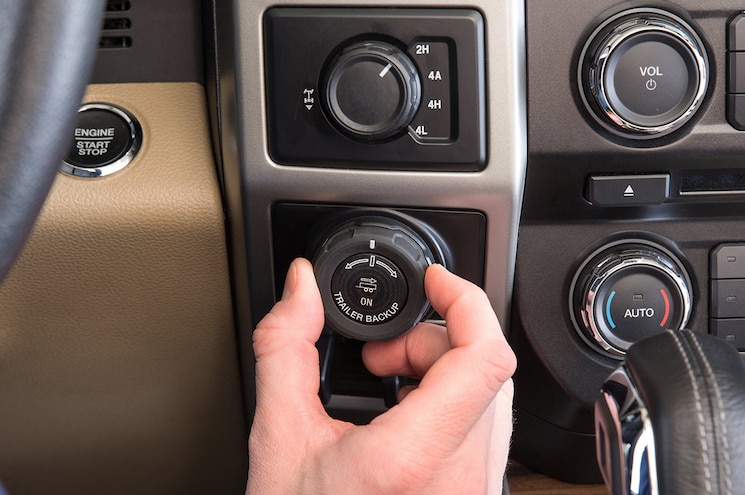 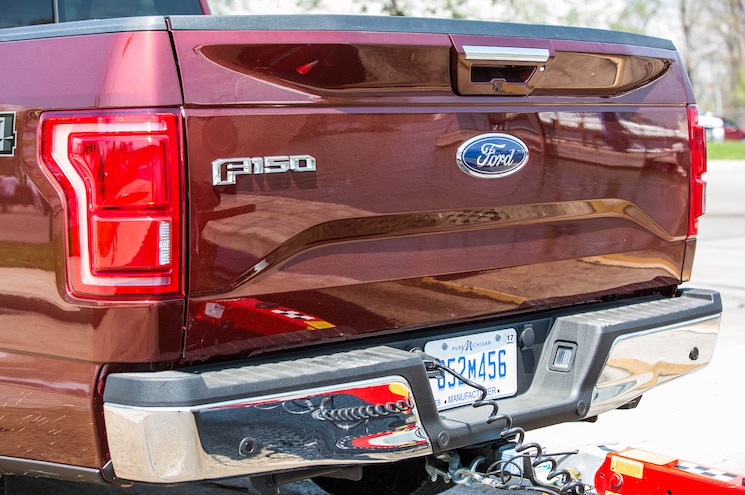 View Photo Gallery | 13 Photos
Photo 12/13   |   The system utilizes the truck’s rearview camera, a special trailer tongue–mounted sticker, and a series of four measurements to control movement. Setup is easy, with six stickers provided and room for 10 trailers to be stored in the truck’s driver information center. 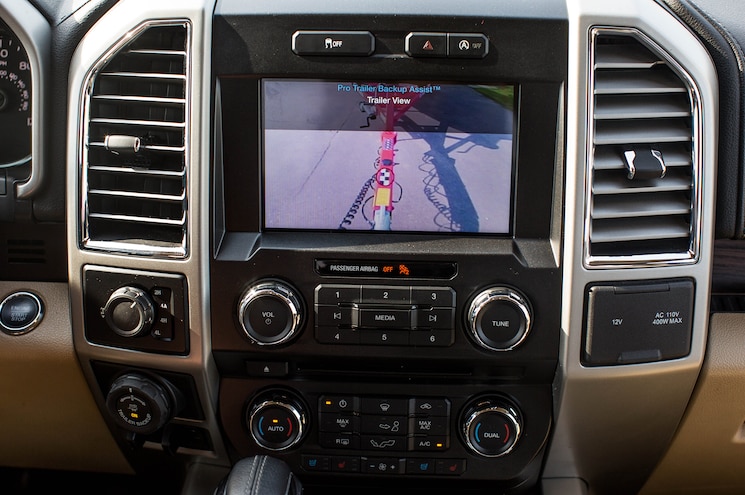 View Photo Gallery | 13 Photos
Photo 13/13   |   When active, the trailer tongue is viewed on the screen. However, this view is not very useful, as the driver should be paying attention to where the trailer is going, not what the tongue is doing.