How to Install a BD Diesel Exhaust Brake Adam Metters spends the majority of his workweek sitting behind the wheel of his ’99 Dodge Ram 3500 dualie, towing heavy trailers over long distances in the Pacific Northwest. A lot of the driving takes him across several mountain ranges, where the truck’s hopped-up 5.9L Cummins engine’s power is put to the test. It’s never let him down.
However, the rig’s weak link is its brake system, which takes a beating once the truck crests the top of the mountain passes and begins the descent into the lowlands. Like many diesel pickup owners who tow full-time with trucks that don’t have the luxury of computer-controlled “grade-braking” systems, Adam spends a lot of money on brake jobs, but that might be a thing of the past.
Hoping to improve his Dodge Ram’s stopping power, Adam is having Springfield, Oregon–based Dunks Performance install BD Diesel Performance’s universal exhaust-brake kit. We’re there to see how it’s done. 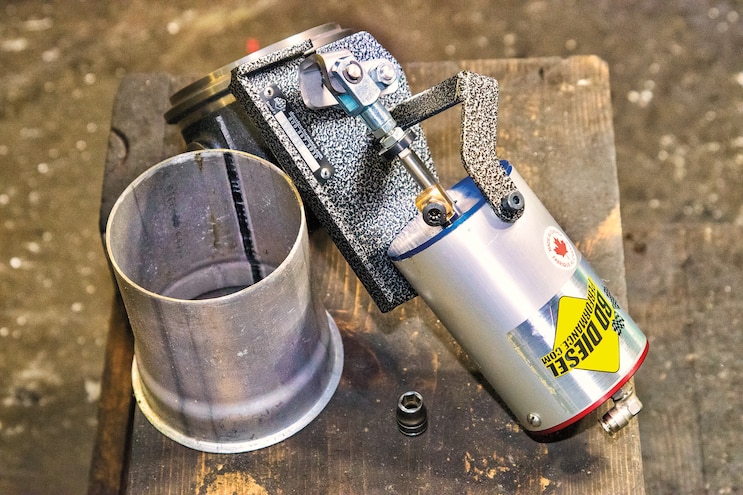 For those who are not familiar with exhaust brakes, the principle is very simple: Restrict the engine’s exhaust flow downstream from the turbo when the throttle is lifted so the increased backpressure works against the engine, slowing it down. It’s a great secondary braking system for trucks that tow or haul heavy loads, and it functions by hydraulically opening the exhaust valves, releasing compression during the engine’s power stroke. (They’re also known as Jacobsen “Jake” brakes, the devices you hear used in big rigs.)
An exhaust brake is just a valve in the exhaust system that partially closes when the throttle is lifted. If the exhaust is completely blocked off, some serious braking will happen. But, at the same time, the pressure that builds upstream (which can reach 60 psi) will either explode the exhaust system or do serious damage to the engine.
To ensure those types of issues don’t occur, exhaust brakes like BD’s universal device can be adjusted to limit backpressure so as to not exceed the engine builder’s specifications: The Power Stroke should not exceed 40 psi, Cummins 60 psi, and Duramax 55 psi.
This is also why it’s critical the engine’s valvesprings be of a higher rating than the exhaust brake’s backpressure setting. If the exhaust valvesprings are too weak to hold against the backpressure, the valves can be forced open and possibly strike the pistons. 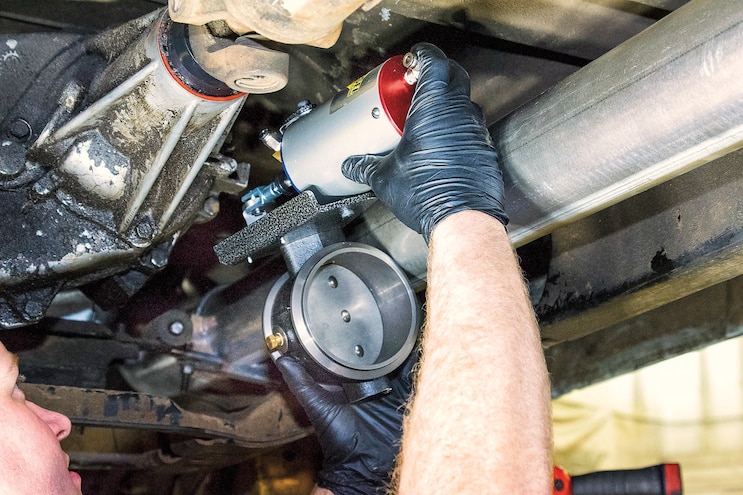 View Photo Gallery | 14 Photos
Photo 3/14   |   Eric Dunks of Dunks Performance finds a suitable location to mount the exhaust brake, directly across from the front differential. The brake needs to be upstream of the catalytic converter, if so equipped.

Installing BD’s Universal Exhaust vacuum-operated, remote-mount brake kit is straightforward: The butterfly-style actuator assembly is mounted in the exhaust between the turbo and catalytic converter, with the activation switch connected to the truck’s throttle system and a control switch in the cab.
In our installation, we’re replacing the toggle-type switch that’s included in the kit with an optional ($69) push-pull switch that mounts on the manual transmission’s shift lever. This places the exhaust brake system’s On/Off switch in a location that’s far more driver-friendly than an out-of-reach dash-mounted switch.
The reverse-power upgrade brings 150 bhp of braking power to bear when the exhaust brake is activated, significantly slowing the big dualie—and whatever it has in tow – without Adam having to touch the brake pedal. The additional braking power will also slow down those brake jobs that cause downtime. 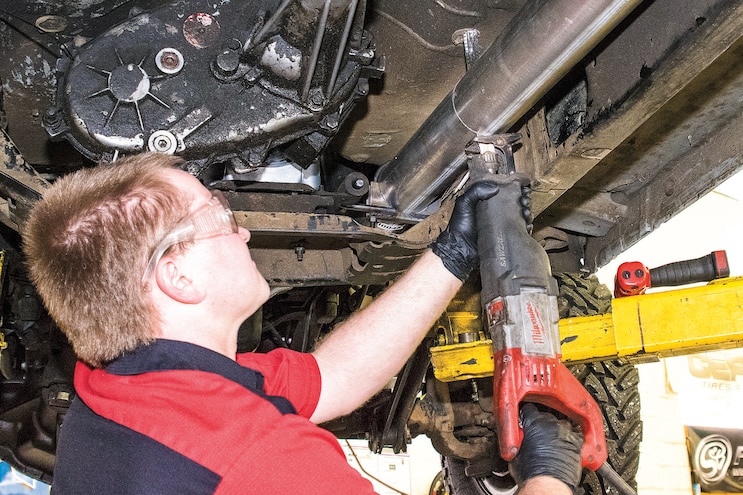 View Photo Gallery | 14 Photos
Photo 4/14   |   After marking the location for the brake, Eric cuts the exhaust where the forward adapter is welded into place. 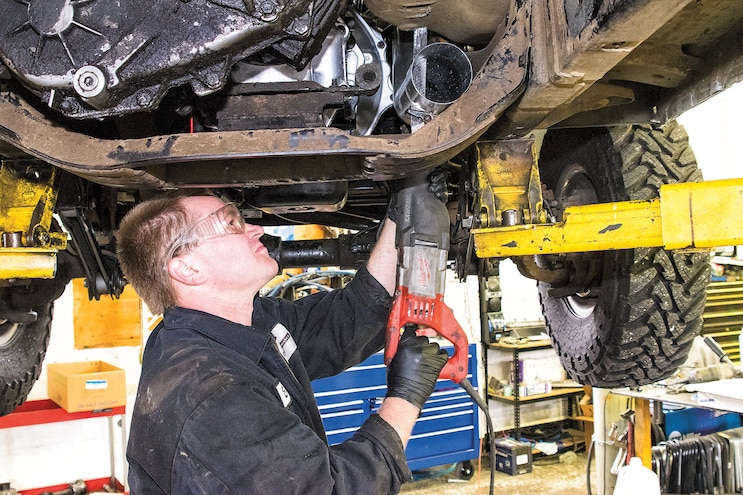 View Photo Gallery | 14 Photos
Photo 5/14   |   A second cut is required to shorten the downstream end of the exhaust so the brake unit and rear adapter fit without having to modify the rest of the system. 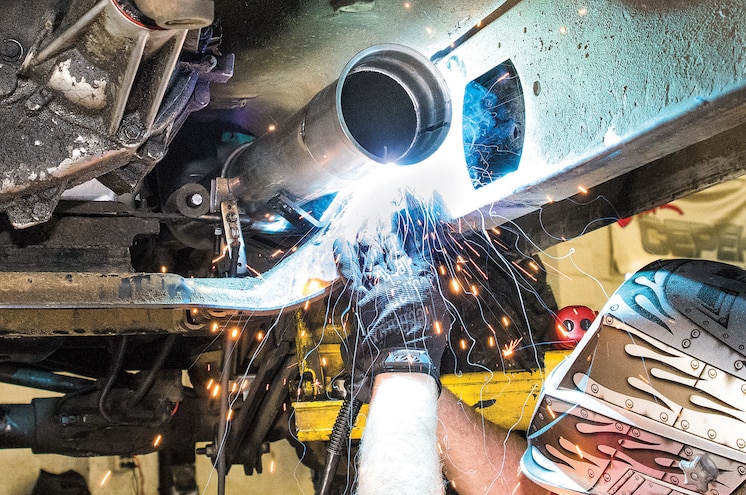 View Photo Gallery | 14 Photos
Photo 6/14   |   The forward adapter is tack-welded into place on the exhaust pipe after making sure it is in the proper location. The same is done on the rear section of the exhaust. 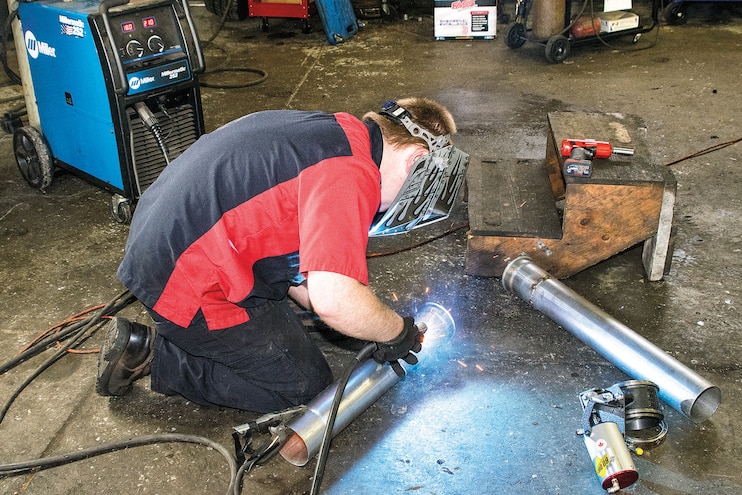 View Photo Gallery | 14 Photos
Photo 7/14   |   Keeping the exhaust backpressure from leaking is critical for maximizing engine braking, so Eric welds the exhaust-pipe adapters off the truck to ensure the installation is leak-free. 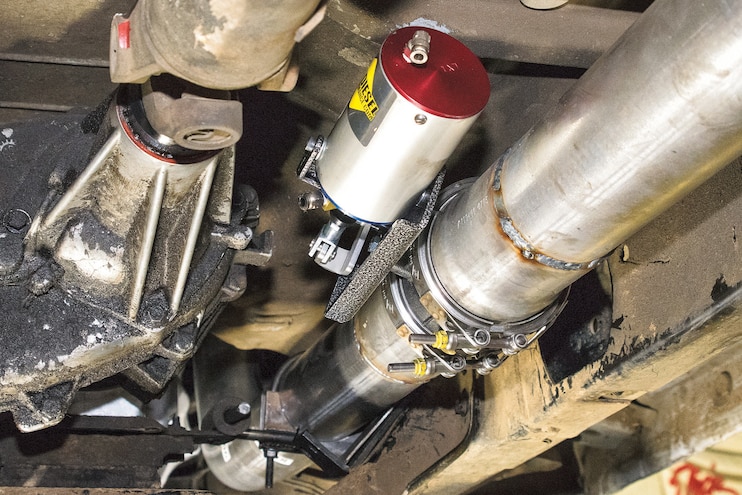 View Photo Gallery | 14 Photos
Photo 8/14   |   The kit includes V-clamps to make both the sealing and positioning of the exhaust-brake assembly trouble-free. We rotated the brake so it sits as high as clearance allows, just in case Adam has to make any water crossings. 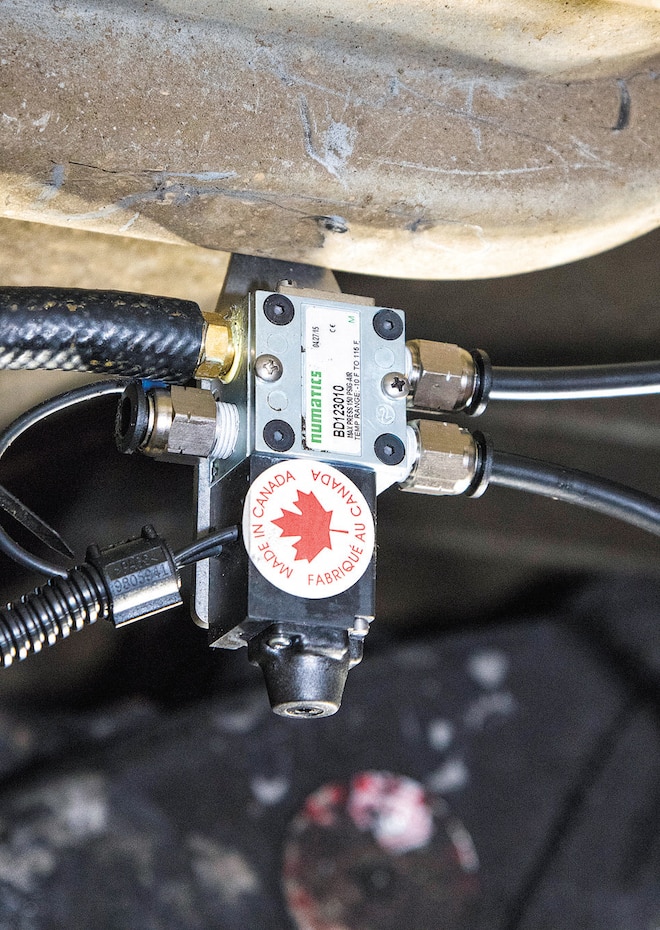 View Photo Gallery | 14 Photos
Photo 9/14   |   This control valve, which has to be mounted vertically on the framerail, uses vacuum from either the brake booster or vacuum pump on the engine to actuate the butterfly valve that restricts the exhaust. 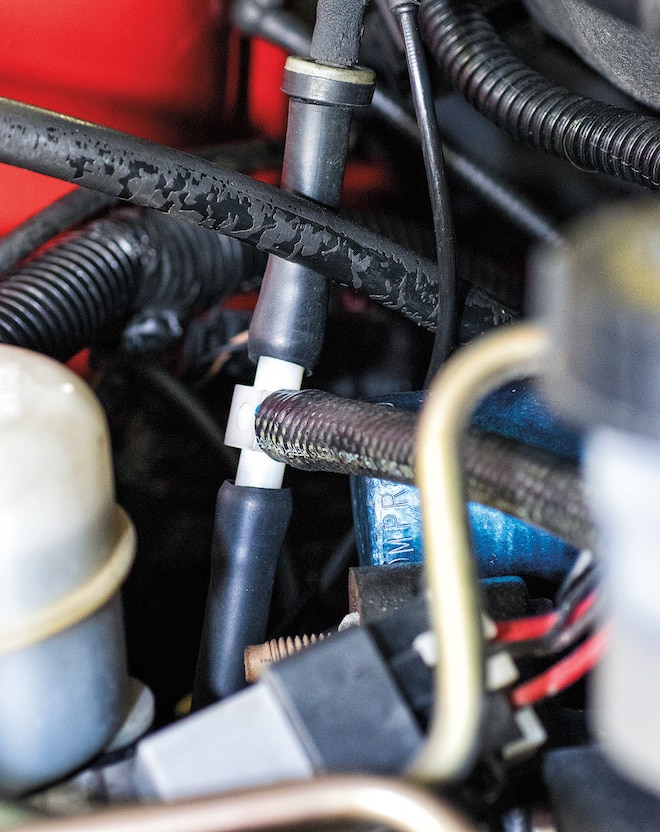 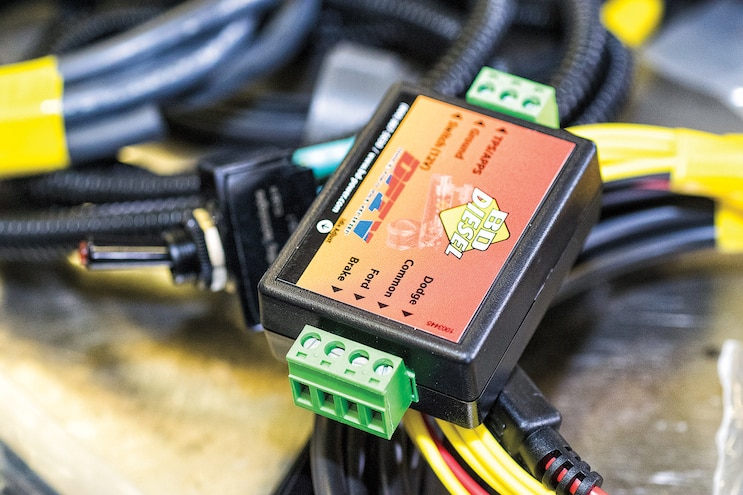 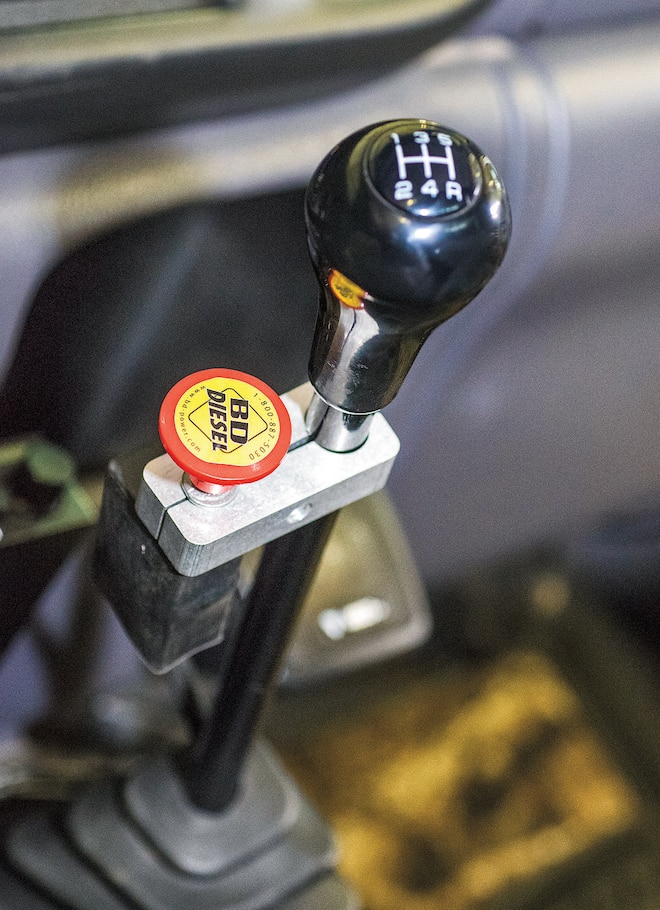 View Photo Gallery | 14 Photos
Photo 12/14   |   A convenient option for those with manual transmissions is this push-pull switch that lets the driver turn the exhaust brake system on or off. 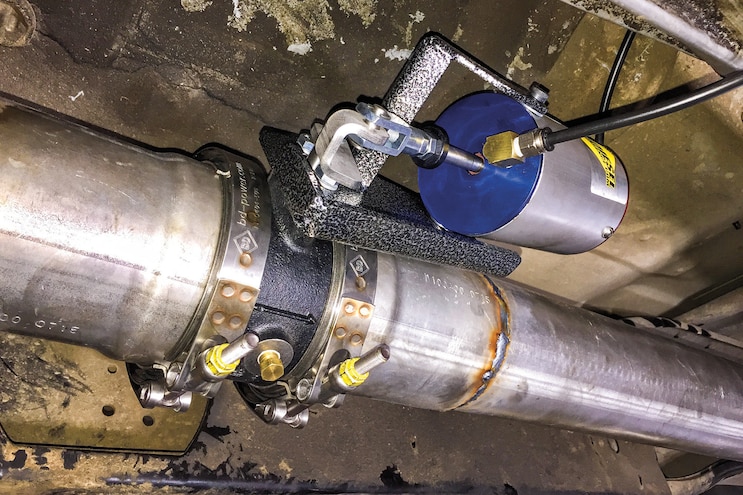 View Photo Gallery | 14 Photos
Photo 13/14   |   It’s surprising how such a simple modification to the exhaust can make such a big difference in braking. 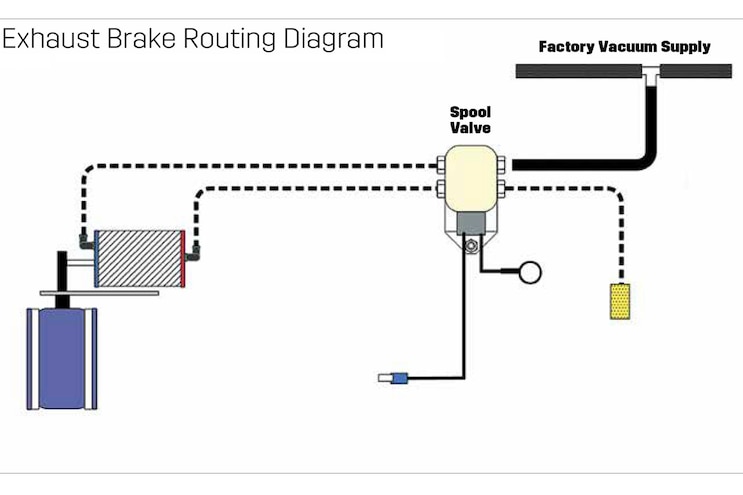