How To Troubleshoot a Tow-Vehicle’s Electrical Circuits for Towing 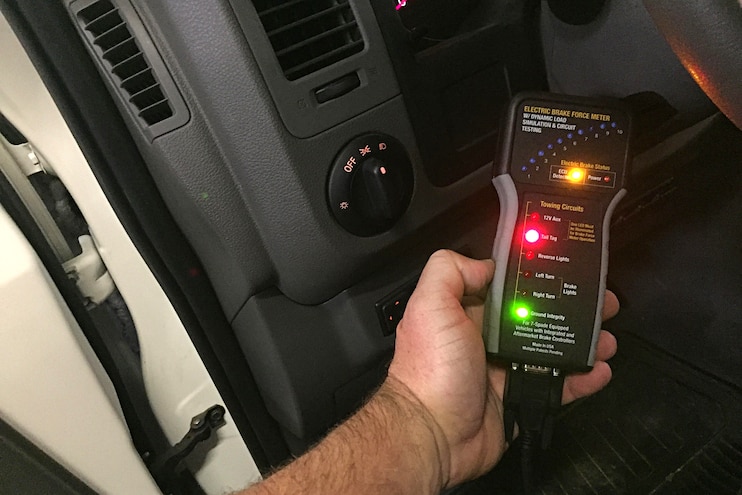 Have you ever had a trailer’s electric brake or lighting systems not operate properly and weren’t sure where the problem originated? It could be the result of an electronic brake controller, electrical wiring, or plug malfunction on the truck, or maybe something is faulty on the trailer. Lighting issues can originate from many of the same sources. Diagnosing any electrical problem can be difficult, especially when it is not known whether the problem is on the trailer or the truck, and checking a brake controller’s output with regular handtools is almost impossible to accomplish. That’s where Innovative Products of America’s Electric Brake Force Meter with dynamic load simulation and circuit testing comes into play.
The handheld device uses a dynamic load-simulation program and a truck’s towing circuits to test aftermarket and integrated trailer brake controllers. It includes a 25-foot cable that plugs into the seven-way, spade-pin, trailer-plug receptacles that are commonly found on most trucks. The meter is powered by a truck’s 12-volt auxiliary circuit or the taillights when it’s activated via the plug. 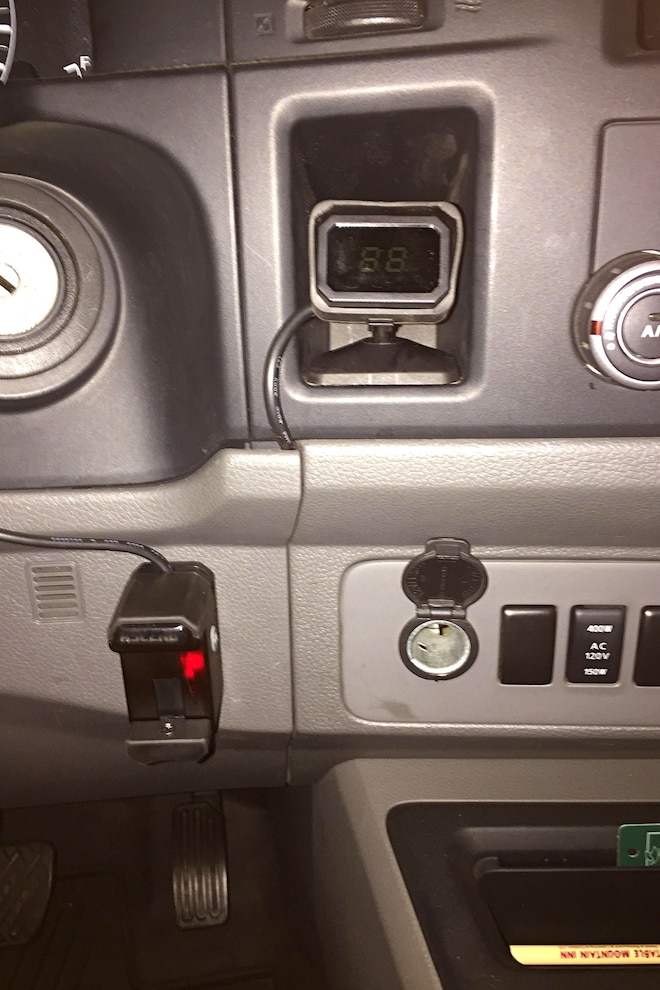 View Photo Gallery | 16 Photos
Photo 2/16   |   A Husky Ascend brake controller is installed in the Truck Trend Network van. Since the van is used to tow different trailers, we want to make sure all the trailer-related electrical circuits are working correctly. In order to confirm all the lights, power, and electric-brake-controller systems are good, we’re using the Electric Brake Force Meter from Innovative Products of America to check them.
A microprocessor inside the meter simulates the typical loads that are imposed on a trailer’s brakes to provide real-time gain and timing data from the controller. These readings are visible via an LED display at the top of the meter. The simulator can also verify that an adaptive (speed-/load-sensitive) brake controller is operating properly.
The handheld device allows the user to quickly test and troubleshoot electrical circuits, including the chassis ground. A yellow LED confirms the ECM is present, while a green bulb verifies there is a ground. A series of red LEDs indicate which circuit (brake, turn signal, taillight, reverse, and 12-volt auxiliary) has been actuated or is present. When a light comes on, it indicates a specific function is working. However, if nothing illuminates when the meter is activated, a problem with the vehicle’s electrical system may be present.
Being able to easily see and test each trailer circuit on a tow vehicle makes it much easier to diagnose where a problem exists: on the truck itself or the trailer. We installed a new electronic trailer brake controller in the Truck Trend Network support van and wanted to make sure everything works correctly before we pull a trailer. Follow along, as we use IPA’s Electric Brake Force Meter to ensure all circuits are good to go and make necessary adjustments to the controller. 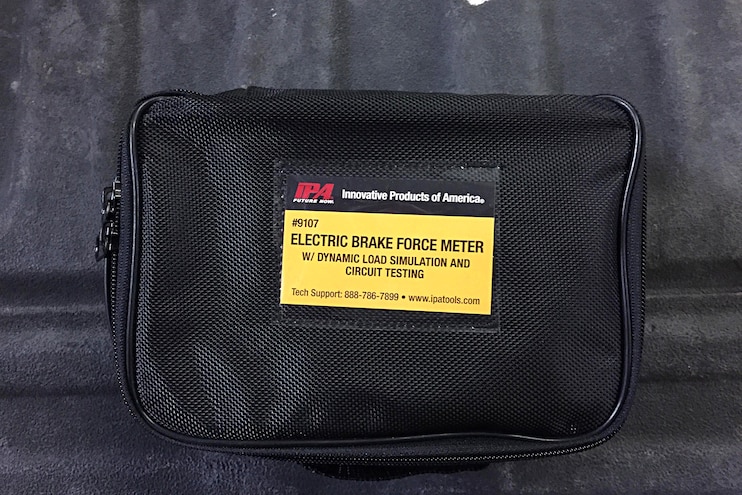 View Photo Gallery | 16 Photos
Photo 3/16   |   The system’s carrying case holds a meter, 25-foot cable with plug, and instruction manual. The cable was unraveled then plugged into the bottom of the meter. 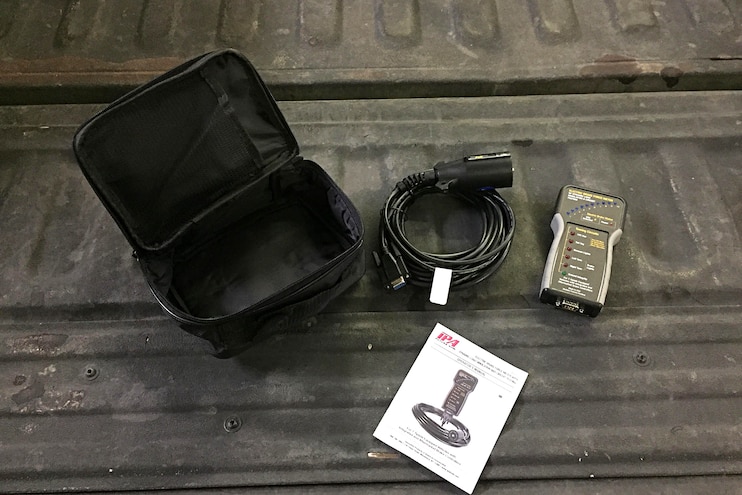 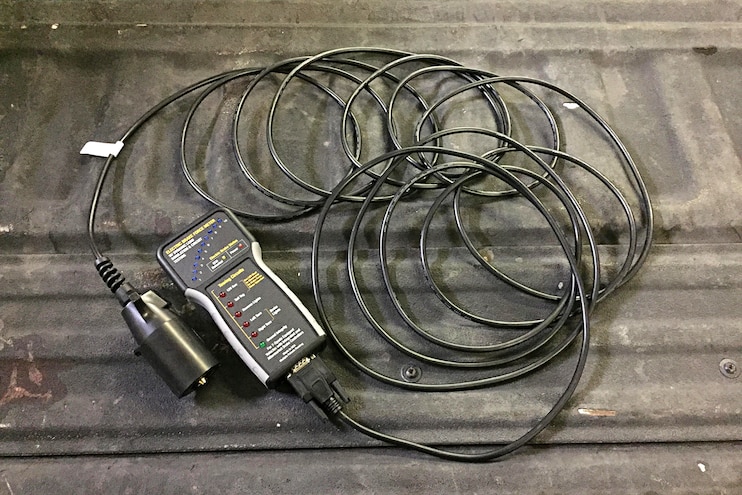 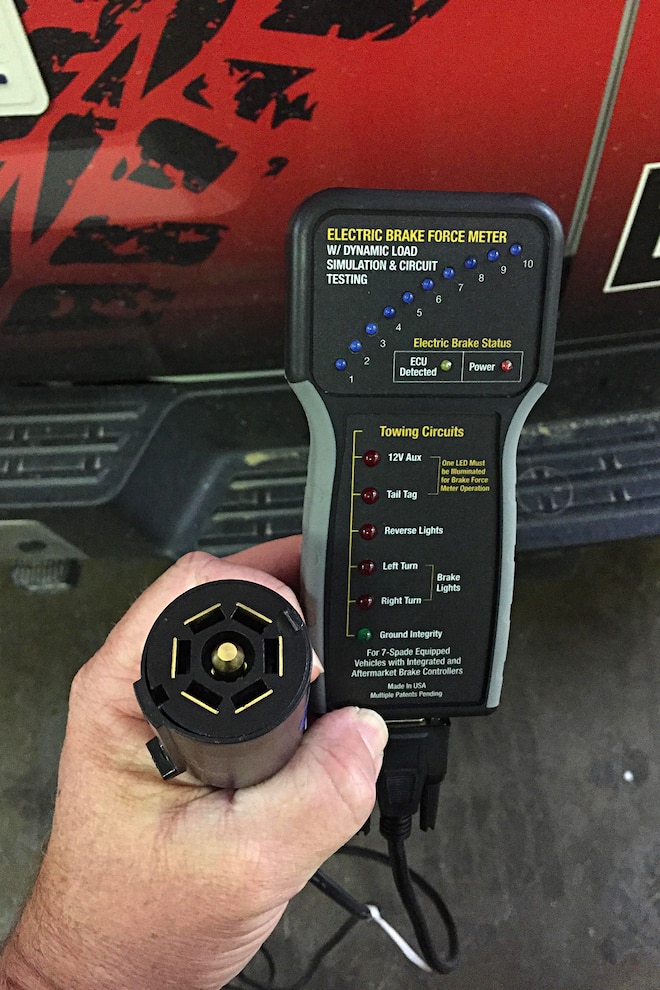 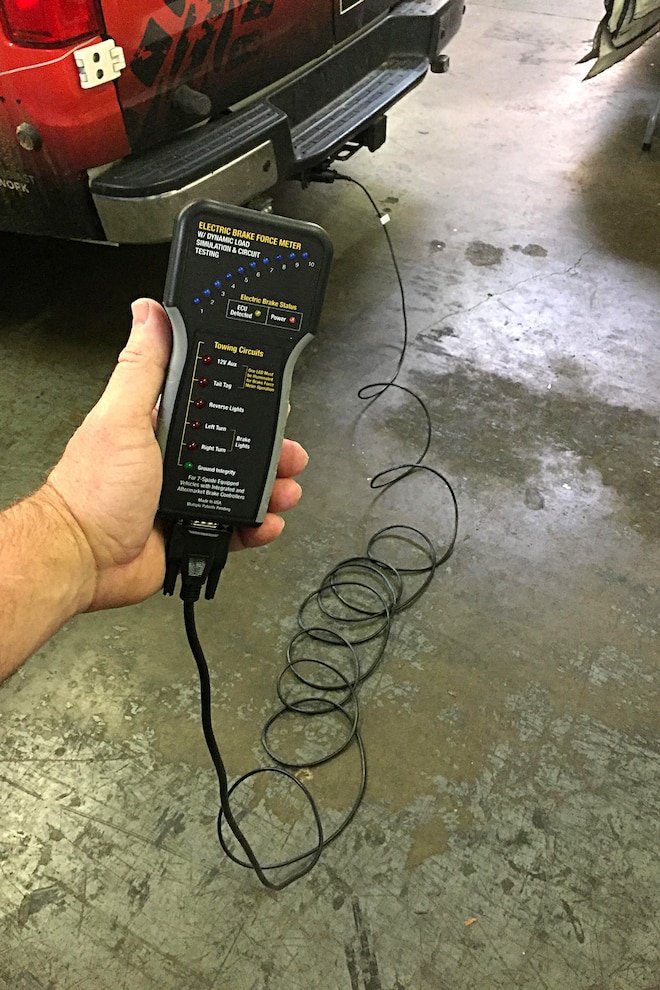 View Photo Gallery | 16 Photos
Photo 7/16   |   Once the seven-pin plug is connected, it’s important to make sure the cable doesn’t become tangled so it will easily stretch to the front of the vehicle. 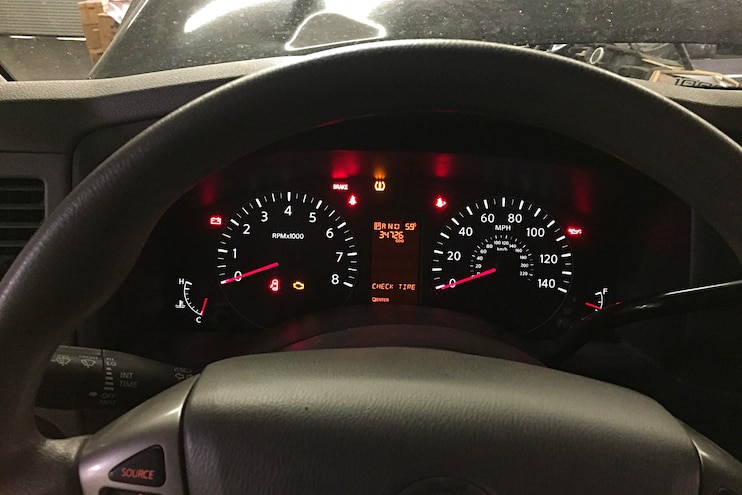 View Photo Gallery | 16 Photos
Photo 9/16   |   Turning the ignition key to the “Run” position with the engine off allows us to continue testing the rest of the circuits. 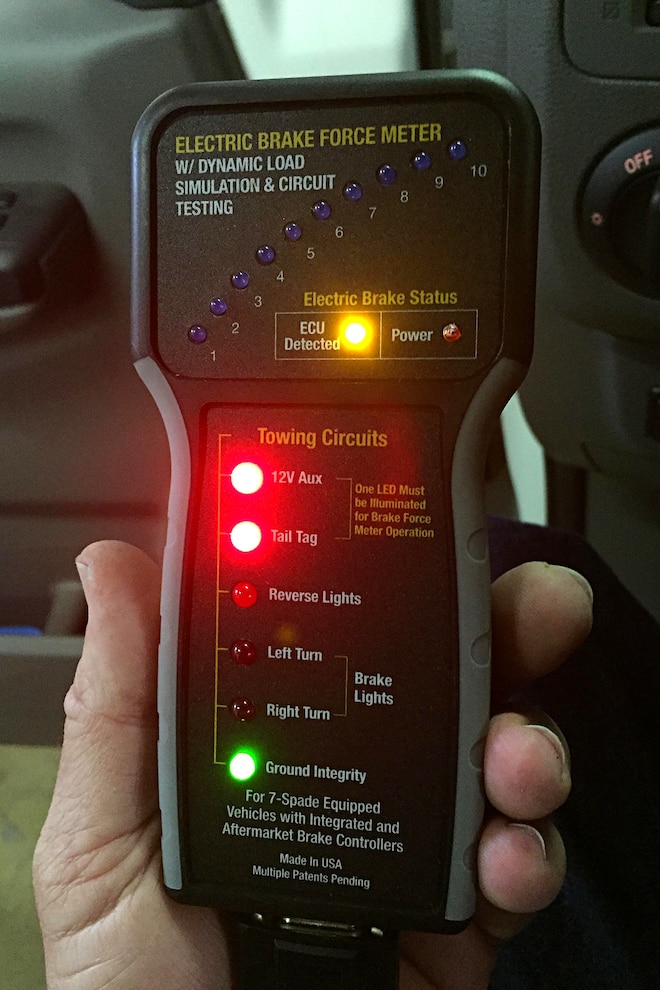 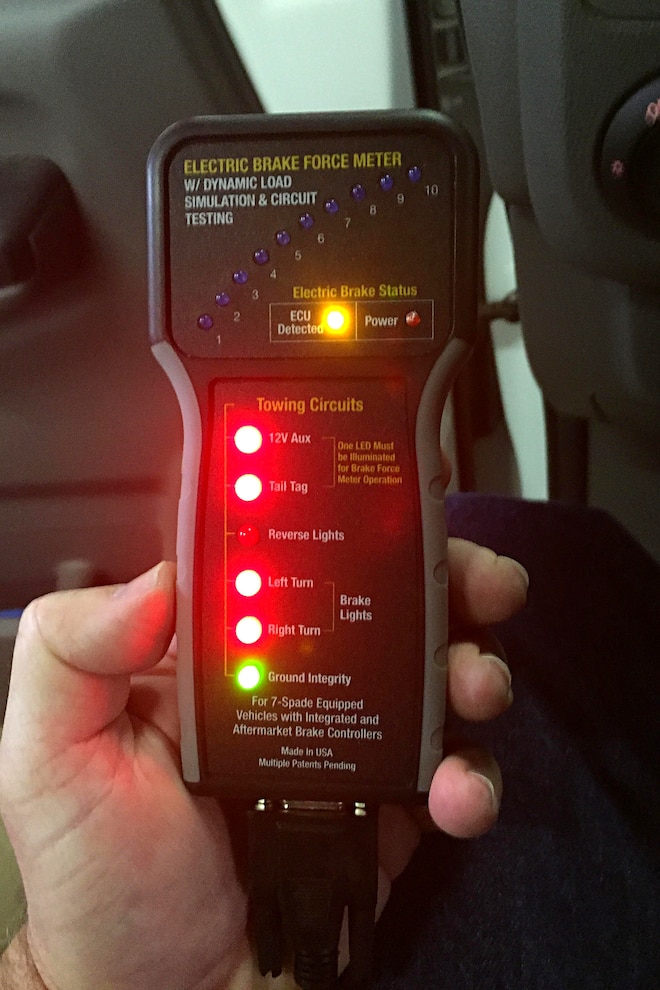 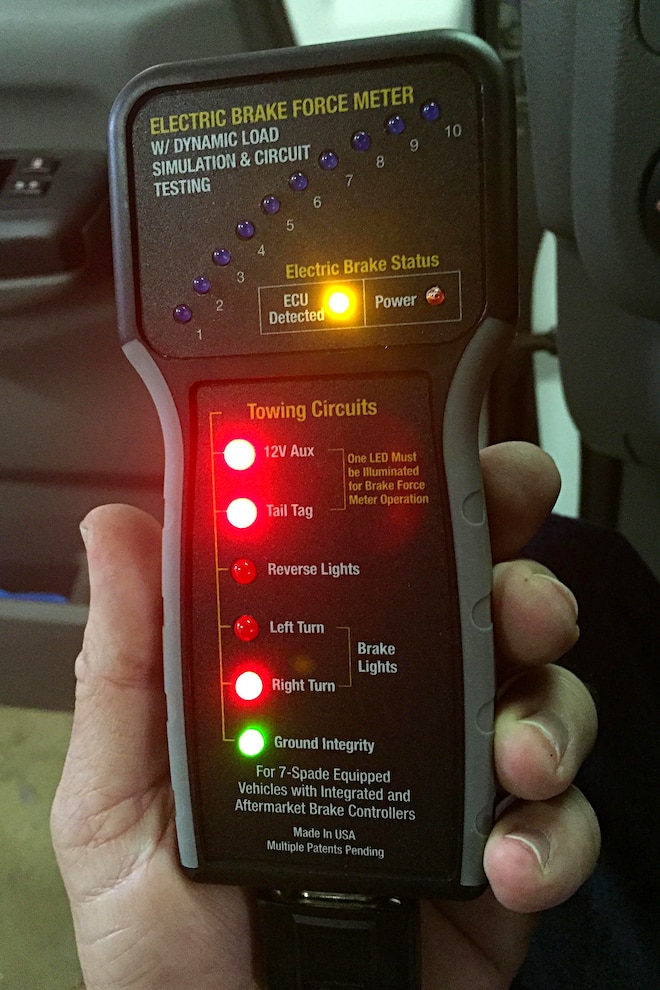 View Photo Gallery | 16 Photos
Photo 12/16   |   Each turn signal’s state of operation is confirmed by red LEDs that correspond to the left and right signals. 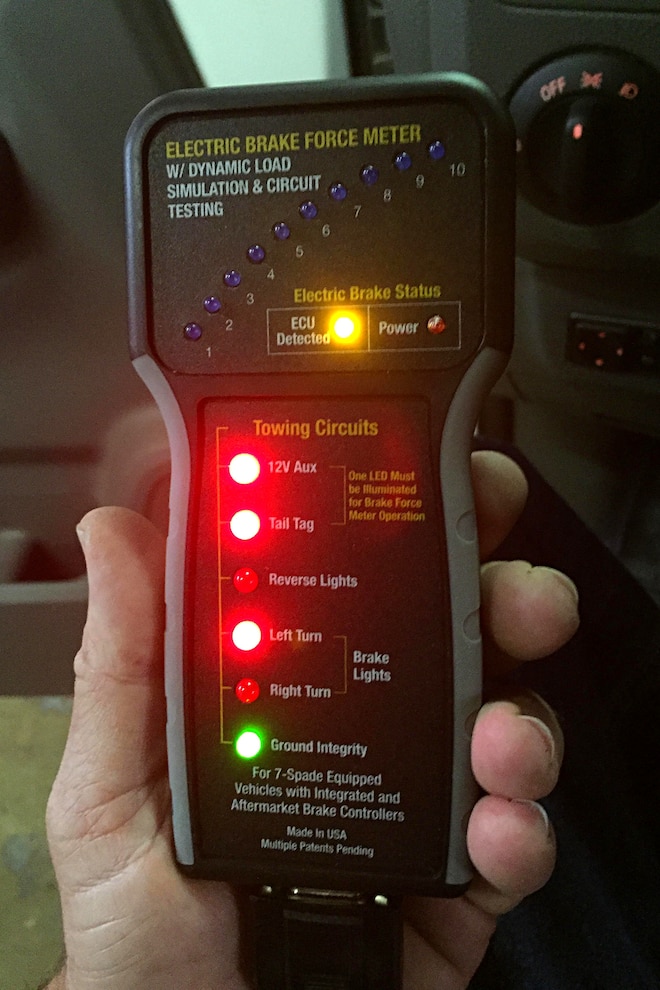 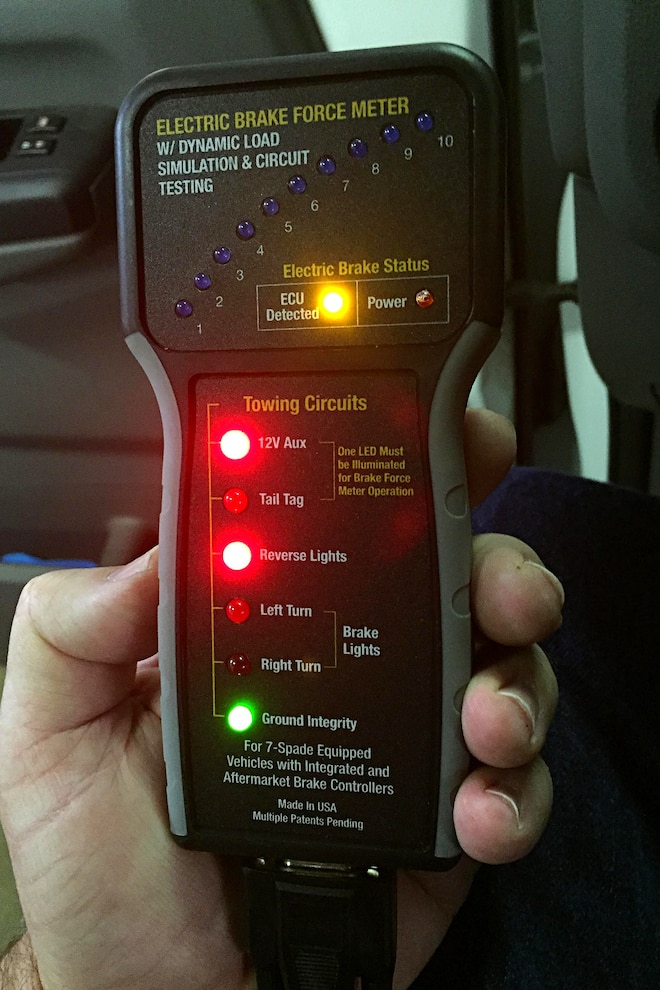 View Photo Gallery | 16 Photos
Photo 14/16   |   Putting the transmission into Reverse lights up the corresponding LED on the meter, which tells us the plug is wired for trailers equipped with reverse lights. 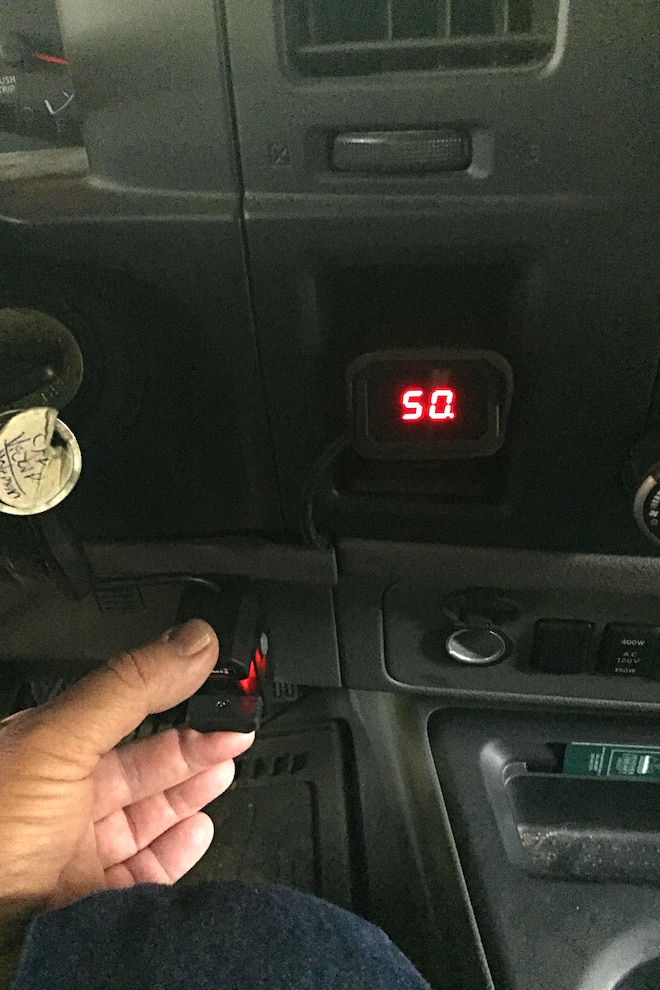 View Photo Gallery | 16 Photos
Photo 15/16   |   Actuating the electronic brake controller by hand allows us to easily test the unit’s output and make adjustments. The Brake Force Meter’s microprocessor simulates trailer-brake loads and displays the amount of gain and timing the brake controller is putting out in real time using blue LEDs. This allows us to see how our adjustments affect the trailer brakes’ sensitivity. 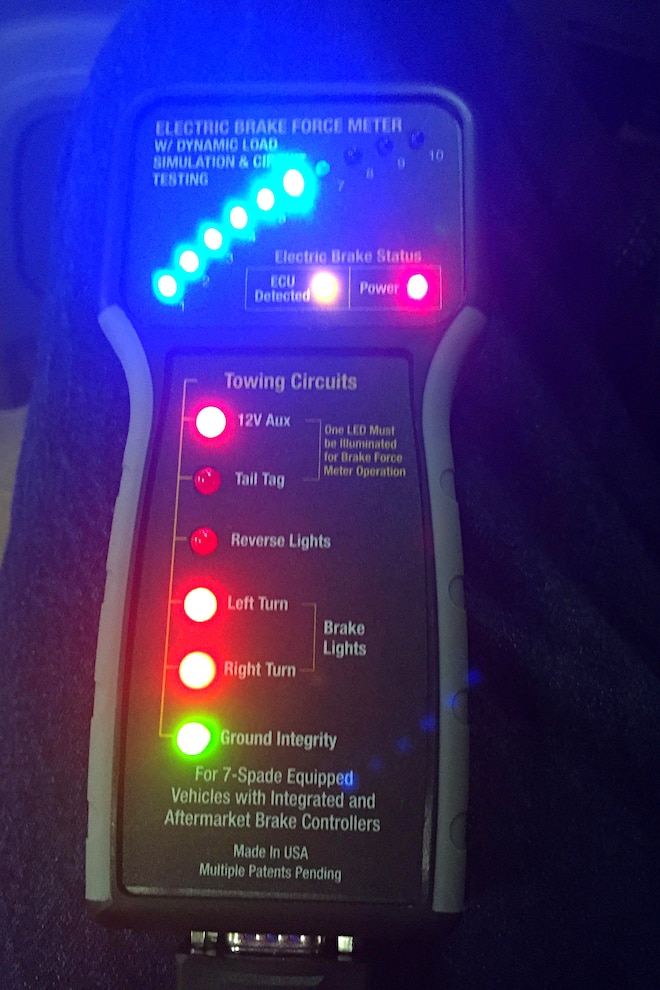