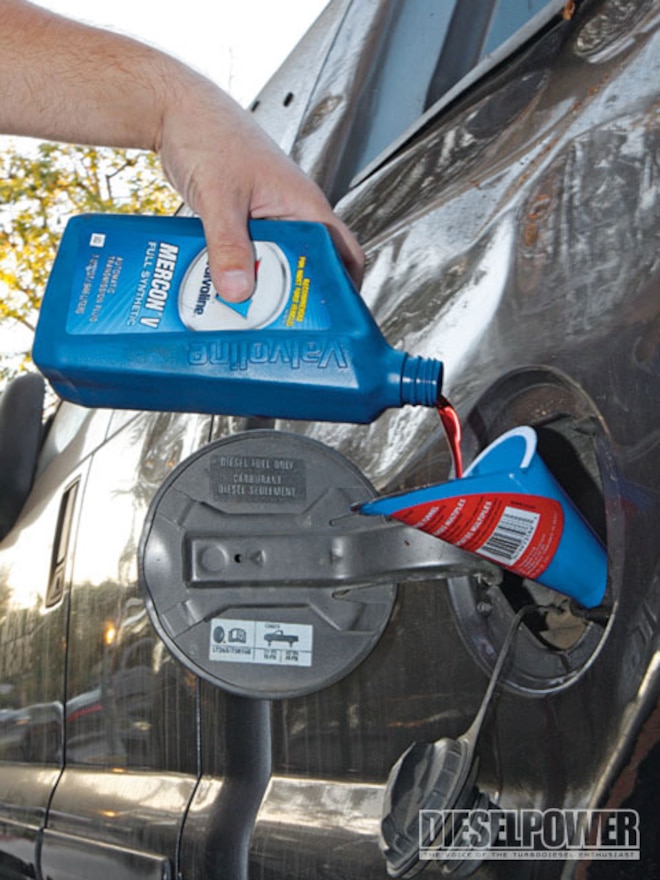 View Photo Gallery | 10 Photos
Photo 2/10   |   automatic Transmission Fluid Fuel atf Fuel
Whether you know it or not, if you own a diesel-powered vehicle, you essentially have alternative fuel-burning capabilities. This is especially true if you own an older diesel (pre-common-rail). Rudolf Diesel himself designed the first diesel engine to run on coal dust, then discovered it would also run on peanut oil. In recent years, biodiesel, vegetable oil, and additives have been all the hype. But what about running something that's free in your diesel, like used automatic transmission fluid?
Saving At The Pump
Yes, that's right, used automatic transmission fluid. Richard Snyder has been running ATF as his primary fuel in his '02 7.3L Power Stroke for nearly two years now. When we caught up with him, he reported that the 90% ATF, 10% diesel mixture he's been burning has caused no problems to date.
The Next Alternative To High Diesel Prices?
While ATF is a questionable alternative to diesel fuel, let us explain to you Snyder's elaborate, but simple system he uses to safeguard his engine. First, a 12-volt Tuthill transfer pump pumps used ATF from a 55-gallon drum through a three-micron spin-on filter to make sure no miniscule metal shavings find their way into the fuel system. Then, he uses a fuel pump nozzle to get the fluid into his Excursion's fuel tank. The last step is adding cetane booster to each tank. The best part about his setup is that he uses his vehicle's battery as a power source for the pump. With a simple plug adaptor, he can fill up anywhere, provided that it has used ATF. In addition, he religiously changes fuel filters every 5,000 miles, and has a spare with him at all times.
Real-World Impressions
Idling seems to be the only time Snyder's 7.3L emitted anything. A faint, light haze of smoke is visible, but disappears during freeway driving. He told us that the only time he experienced a loss in power was when running a 100% used ATF mixture. This may have something to do with the fact that ATF doesn't burn as readily as diesel. According to our research in lower flammable limit (LFL) and upper flammable limit (UFL), we found that diesel will burn sooner and longer than ATF, which translates into more complete combustion. And, as ATF was not intended to be combusted, no BTU (British Thermal Unit) rating exists to compare it to diesel. We suspect ATF's BTU rating is lower than diesel, but despite this, Richard claims that neither his mileage nor power has dropped since he started running his current 90% used ATF, 10% diesel blend. In addition to saving at the pump, Snyder claims his EGTs are 100 degrees cooler, and the engine runs quieter.

View Photo Gallery | 10 Photos
Photo 6/10   |   Imagine planning a road trip where all your fueling stops were transmission shops.
The Other Side, Into The Unknown
Of course, it is not recommended that ATF be burned as fuel. Francis Healy of the Chevron Fuel Technology Team, says that "the root cause comes from blending ATF with ULSD" for lubricity reasons. According to Healy, the lack of lubricity found in early mixes of ULSD is no longer a problem, as fuel manufacturers now add necessary lubricants during refinement. As far as the long-term effects of running used ATF as fuel, Healy spoke on behalf of Chevron. "We (Chevron) can only speculate, but under higher fuel pressures (namely common-rail engines), the engine won't last, and can cause extreme wear on injection systems."
Royal Purple Inc., and Jim Miller of Opti-Lube believe that burning used ATF as fuel will leave hydrocarbon deposits behind that will not burn cleanly. Being that paraffinic oils (which are essentially long chains of hydrocarbons)exist in ATF, we would have to agree with them that an ash (basically soot) would be left behind. Our research confirmed this point even further, as we discovered that diesel vaporizes 40 times better than ATF. In addition, Miller stated that it definitely will not help with water/fuel separation, and that cold start-ups would be difficult.
Burn At Your Own Risk
Older indirect-injection and early direct-injection diesels may be more tolerant than common-rail engines when running used ATF due to lower injection pressures. But, long-term affects are still unknown. Anything you gain in saving money at the pump could potentially be lost in catastrophic repairs later. In our research we found no reports of engine failures resulting from burning filtered, used ATF as fuel. Jeff Garmon of Garmon's Diesel Performance in Griffin, Georgia, agrees that used ATF works, and believes that running a 100% mixture would make no performance or mileage difference in '89-'981/2 12-valve Dodges, and told us that "any of your low-pressure fuel injection systems will run it, no problem."
We wouldn't call it a gamble, but it is definitely risky, being that no real mainstream testing has been conducted on burning filtered, used ATF as fuel. In the end, it's up to the diesel owner. Snyder is more than happy running used ATF, and it has saved him a lot of money at the pump, but taking that chance might not be in the cards for other older diesel owners. Nevertheless, a lot of our readers are mechanics, and may have a good idea of where and how to get ahold of considerable amounts of used ATF. All we can say is that it hasn't failed Snyder yet in more than 18,000 miles, and is an unproven alternative to unstable diesel prices.

View Photo Gallery | 10 Photos
Photo 10/10   |   Being that Snyder has useable 12-volt power by simply hooking up to one of his Excursion's batteries, he can take the kit with him anywhere. For a recent road trip his wife made to Oregon, Snyder filled these five-gallon cans with used ATF for her to bring along for some free fill-ups.
CAUTION - Possible Pitfalls:
* ATF is not a legal road fuel
* Cold weather start-ups will be harder
* Hydrocarbon and ash deposits can be left behind
* Common-rail fuel systems won't handle it, as they are more temperamental. So, don't run it through your CP3 or piezo injectors
* Pollution increases, exhaust fumes may be harmful, and some smoke may be visible at idle
* May be hard to get ahold of used ATF, as many shops use their used fluids as fuel for their multi-fuel (alternative fuel) shop heaters
* There is no guarantee that even a one-micron filter will remove all metal shavings and other deposits/particles from used ATF
* You never know exactly what has been thrown into a recycled oil pan or waste oil bin at your local shop. There is no guarantee that anti-freeze, brake fluid, or even gasoline wasn't deposited into the same pan.