Automatic Transmission - How It Works 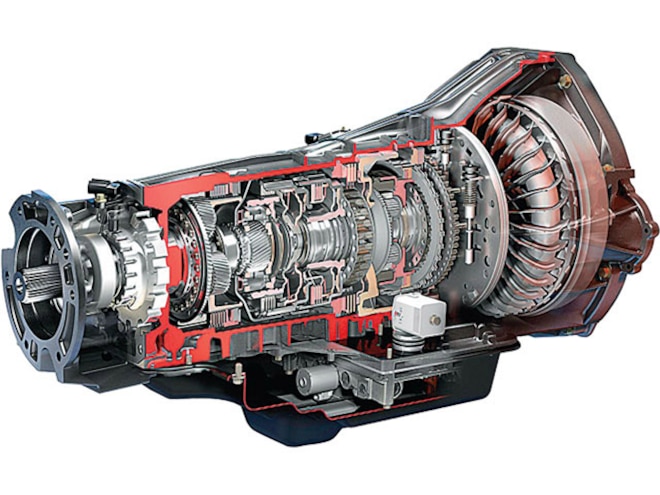 View Photo Gallery | 6 Photos
Photo 2/6   |   automatic Transmission side Angle
Automatic transmissions are the transmissions of choice in today's diesel realm. They've come a long way over the last decade, and are now beefier and more complex than ever before. This is an effort to combat the monster torque numbers factory trucks make. In this section of How It Works, we'll explain the components that make these monsters function, and how they hold up to the massive stresses imposed on them.
Planetary Gearsets
The heart of an automatic transmission is the planetary gearset. Planetary gearsets allow a transmission to have several different gear ratios, with different clutches holding certain components stationary. Planetary gearsets are made up of a sun gear, planet gears and the planet gears' carrier, and the ring gear (also known as the annulus gear). Each of these three components can be the input, output, or can simply be held stationary.
Torque Converter
A torque converter is essentially a fluid coupling device that transmits power from the engine to the transmission. Not only that, a torque converter acts like a clutch in that it allows your truck to stop and the engine to idle with the transmission still in gear. Diesel transmissions feature lockup converters, which effectively couple the transmission directly to the engine, stopping slippage, allowing more power to get to the wheels, and providing better fuel economy. All current diesel-specific transmissions have lockup torque converters. When does lockup occur? For example, on our '97 Power Stroke's E4OD transmission, lockup occurs after the transmission shifts into Third gear, and before it shifts into Overdrive (32 mph). It often feels like a shift in itself.
Valvebody & Shift Kits
Think of an automatic transmission's valvebody as a hydraulically imprinted circuit board. Considered the brain of the transmission, the valvebody is made up of two sides, which look like a maze of hydraulic passages with a separator plate in between. Each passage in the valvebody has a different purpose and directs fluid to the numerous valves that activate the appropriate clutch pack to shift into the correct gear. Aftermarket shift kits can change shift firmness, timing, and efficiency by adding stiffer shuttle valve springs, check balls to block certain passages, and often feature additional holes in the separator plate for increased fluid flow. Shift kits reduce slippage between gear changes and often prolong transmission life.
Going Through The Gears In A FOUR-Speed Automatic With Overdrive
In First gear, the small sun gear is forced clockwise by the turbine in the torque converter. When this happens, the planet carrier attempts to rotate counterclockwise, but can't because a one-way clutch, which only allows clockwise rotation, keeps it stationary. As this happens, the ring gear turns the output shaft.
In Second gear the transmission's two planetary gearsets lock together as one solid unit sharing a planet carrier. The first stage of the planet carrier uses the large sun gear as the ring gear. So basically, the first stage is made up of the sun (the smaller sun gear), the planet carrier, and the ring (the larger sun gear). The input is the small sun gear, and the ring gear (large sun gear) is held in place, while the output is actually the planet carrier. All four-speed diesel transmissions have a 1:1 ratio in Third gear. This happens when the clutches engage and lock each sun gear to the torque converter turbine. This makes both sun gears turn in the same direction, which in turn makes the planet gears lock up because they only turn in opposing directions. This effectively locks the ring gear to the planets and makes everything spin as one solid component (hence, 1:1).
In Overdrive, a shaft attached to the torque converter housing is connected by a clutch to the planetary carrier. The small sun gear is allowed to spin freely, while the larger sun gear is held in place. Essentially, nothing is connected to the torque converter turbine, so the only input comes from the converter housing.
What To Expect From A Shop Rebuilding Your Stock Transmission:
*The transmission should be completely disassembled to check everything. While some parts may not need to be replaced, it's good peace of mind to know nothing was overlooked. All clutches,clutch plates, seals, bearings, shafts, and even planetaries should be thoroughly inspected before being given the OK to operate another 100,000 to 500,000 miles.
*Have the valvebodies disassembled, cleaned, and inspected. This will ensure none of the valves stick once the truck is up and running again.
*Once an electronic transmission is bolted in, all transmission vitals should be monitored via a scan tool to clear previous codes thrown by the transmission control unit (TCU), and to make sure the TCU and your engine's ECM reprogram themselves correctly.

View Photo Gallery | 6 Photos
Photo 6/6   |   automatic Transmission max Atf
Automatic Transmission Fluid
Much more important than in manual transmissions, automatics, due to their sheer complexity and quantity of moving parts, require considerable amounts of transmission fluid. Automatic transmission fluid's main purpose is to aid in valve operation (allowing the transmission to shift), lubricate all the gears, reduce rotating assembly friction, and keep the internals at adequate operating temperatures. Most automatic transmission fluids offer ingredients like anti-wear additives, high-temperature thickeners, detergents, dispersants, and rust preventatives. DP
Upgrading A Transmission
What do you get when you have a transmission rebuilt? You may have asked yourself this question in the past, or may be wondering about it right now. The answer can vary, depending on the type of build you're looking for. For example, rebuilding a factory transmission may be as simple as replacing its soft parts (clutch plates, seals, and gaskets). Depending on the transmission's condition, it may also need a new torque converter, input, intermediate or output shafts, sprags, or even planetaries.
What To Expect From A Shop Building You A Performance Transmission:
*Transmission technicians will most likely build your transmission with an idea of the kind of power you plan to make with the engine in mind, or will ask you to provide a list of current modifications done to the engine. Then, with a baseline power number to work with, they can decide what it takes to withstand the stresses that amount of power will exert. In some cases however, it's unknown how far an owner plans to go with an engine. With this type of situation it doesn't hurt to swing for the fences. Going this route will offer peace of mind to those planning on stepping up power in the future knowing that their transmission will handle whatever the engine can dish out.
*An upgraded torque converter is a must. The most common upgrade is to a triple-disc converter with a billet steel coverto avoid any slippage. Other common upgrades in performance transmissions are aftermarket stators, as well as flexplates.
*Performance valvebodies, often with a shift kit and an after-market pressure regulator, provide adequate fluid circulation and trouble-free shifts.
*Although you may have to request a billet input, and an intermediate or output shaft, it may be worth it. Depending on your power level, at the very least, the input shaft should be upgraded because it suffers most of the load from the engine.
*All clutches should be replaced with upgraded units that provide an increase in surface area for optimum holding power, better heat absorption, and shorter lock-up time, which will lead to less slippage.
*Friction plates should also be replaced with aftermarket units for increased heat dissipation and wear life.
*All seals, sealing rings, gaskets, and washers should be replaced.
*An aftermarket transmission cooler and deep transmission pan should be included for optimum cooling.