The Makings Of A Bulletproof Ford 4R100 Transmission 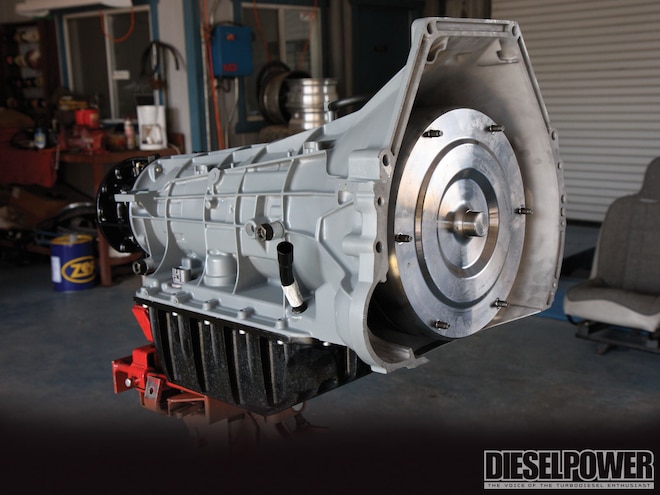 The release of Ford's Super Duty in 1999 kick-started an explosion of aftermarket performance parts for the revamped 7.3L Power Stroke. But dieselheads quickly found the weak link: the 4R100 transmission. Much like the E4OD (offered behind Power Strokes from '941/2 to '97), with just a hot performance tune and a heavy right foot, the stock slushbox could be destroyed rather easily.
View Photo Gallery | 18 Photos
Photo 2/18   |   diesel Power ford F250 Super Duty Transmission transmission Rebuild
One shop that's been specializing in 4R100s (and any Ford transmission, for that matter) since the beginning of diesel truck performance is John Wood Automotive. Over the last decade and a half, owner John Wood has seen all kinds of transmission failures, and each bulletproof transmission he puts together today is the result of extensive, hands-on research and development. With a full line of transmissions for Ford trucks, he's built a reputation of doing the little things that make an automatic durable, reliable, efficient, smooth shifting, and according to his customers-indestructible.
Over the winter we got our hands on an '00 Ford F-250 Super Duty with an ailing factory automatic transmission and took it to Wood. Once there, we were able to see his expertise in action, as he transformed the stock, burnt-up 4R100 into a rock-solid, tow- and track-ready unit.
View Photo Gallery | 18 Photos
Photo 3/18   |   The first signs of internal damage were visible after the 4R100's transmission pan was removed. A considerable amount of metal was present in the bottom of the pan, and the magnetic drain plug had accumulated a lot of debris as well (arrow). John Wood told us that this was probably due to the clutch plates breaking down and coming apart.
Affordably Priced
Thanks to longtime engineering friend John Corrao (who has offered an array of knowledge over the years), Wood is able to build a transmission unlike anything else offered on the diesel truck market. Wood's entry-level transmission (called the Tow Master) features a triple-disc torque converter with a billet front cover, new clutch plates, custom pressure plates, a modified coast clutch drum and reverse hub assembly, a modified valvebody, and is rated to support 375 hp at the wheels. It also comes with a written, 3-year/50,000-mile warranty. And the best part is: At only $3,600, it doesn't cost an arm and a leg to have a reliable, built automatic transmission. But don't let the low price mislead you. By machining his own components and doing nearly everything in-house, Wood is able to keep his overhead costs very low.
Shifting Mannerisms
We don't know what it is about the aftermarket, but neck-snapping shifts aren't ideal in built automatics intended for street use, or in towing applications. Once the tires spin and traction is lost (during a hard shift) you've often already lost the race, or some of your towing momentum (there's nothing worse than anticipating a whiplash-like shift with 12,000 pounds behind you). We agree with Wood that the best shift a transmission can make is a nice, clean shift transition with a very quick rpm drop-not one so firm you feel it in the truck's dash.