Heavy Hauling with A Modded Cummins 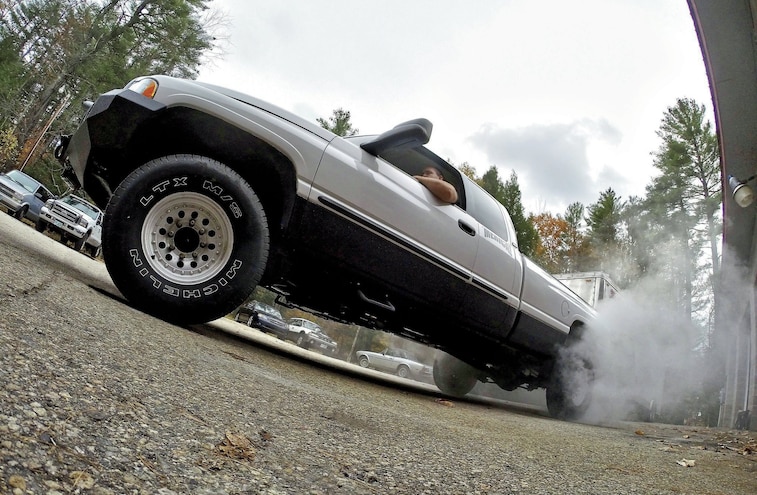 If you believe in reincarnation, there’s no shortage of earthly objects that would supremely suck to spring back to life as. Top of our list of stuff we’d rather not be reincarnated as include a porta-potty at bike week in Sturgis, South Dakota; a New York City taxicab; a bedsheet in a Vegas hotel room; and a clutch assembly strapped to a Cummins turbodiesel engine. If you’re dealt any of these hands, chances are you did something really egregious in your past life, so enjoy the punishment—you probably earned it.
A buddy scored a clean, low-mileage Cummins-powered second-generation Ram a few months back, complete with the desirable NV4500 five-speed. He was stoked right until the clutch started slipping a week later despite having only 70,000 miles on the ticker and having enjoyed a pampered upbringing. However, premature clutch failure isn’t uncommon in these trucks, and the fact that this one was already knocking on death’s door meant it probably wasn’t up for the task in the first place. Add a recently installed Edge tuner, a 4-inch turbo-back exhaust, and 40hp injectors into the mix, and the factory clutch didn’t stand a snowball’s chance in hell.
There are several aftermarket clutch options to choose from for these trucks, but only a couple offer a substantial upgrade from stock without the cost, noise, driveability, and pedal effort considerations of a full-blown competition clutch. Since more than 1,600 lb-ft of torque isn’t in this truck’s future, the one that was deemed best-suited to our application (and maybe even erring a little on the overkill side) was the Street Dual Disc Clutch from South Bend Clutch. If you’re reading this and you own a Cummins-powered Ram with a manual tranny, there’s a real good chance you’ve heard of South Bend Clutch. The company has a reputation for reliably making the connection between insanely powerful diesels and their transmissions with its dual-disc clutch kits. 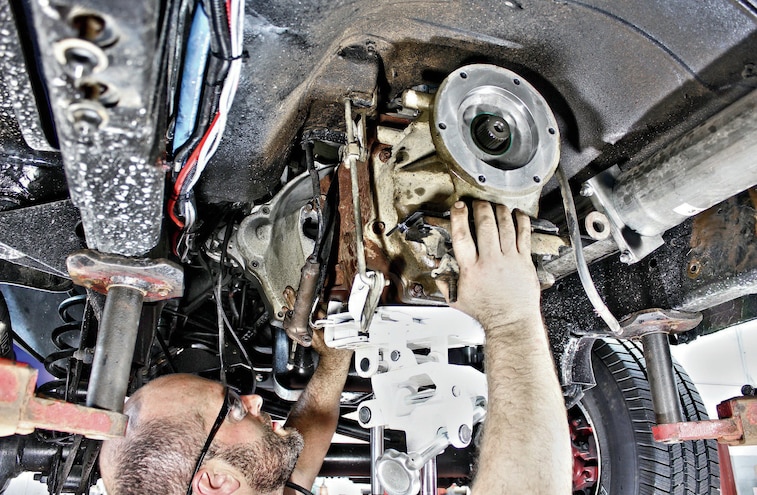 View Photo Gallery | 15 Photos
Photo 2/15   |   The first step in our quest for holding power was to liberate the driveshafts, transfer case, and the transmission from the underside. Working with a rust-free truck, the driveline came out unbelievably easy—not something we’re used to ’round here in the Northeast.
Rated for 550 to 750 hp and up to 1,400 lb-ft of torque, the Street Dual Disc Clutch kit has all the holding power this particular truck would ever need, with ample grip in reserve for any future power-adders, larger tires, and for towing every ounce of the truck’s rated capacity. By employing dual-friction discs with a ½-inch-thick separator plate sandwiched in between, torque loads are now dealt with by twice the holding force. Each friction plate is faced with ceramic friction “buttons” on one side and organic on the other. Why the different materials? There are a couple of reasons: First, a full-ceramic-faced clutch is either in or it’s out (there’s no slipping it in traffic or off-road situations that require finesse), so to allow for a more forgiving engagement, the organic-faced sides ride on the flywheel and pressure plate bearing surfaces. The other reason is ceramic friction surfaces are able to work within a much higher heat range than organic, so where heat is likely to build on either side of a separator plate’s bearing surfaces, ceramic makes the most sense. Match this newfound holding power with the larger 13⁄8-inch-diameter input shaft (stock is 11⁄4) that’s part of the package and our connection between engine and transmission just got a whole lot more reliable.
Our buddy had just finished his South Bend-recommended 300- to 500-mile break-in period as of writing this, and we’re happy to report that he couldn’t be more satisfied with his truck’s new ability to put power to the ground. No matter what the rpm range, the power level to which his programmer is set, the weight he happens to be towing, or how many smoky burnouts he does, this clutch has yet to show weakness. While you still can’t slip it like a factory clutch, and—despite the noise damping efforts—you can still hear the clutch doing its job, it’s hard to argue with the reliable holding power afforded by this particular South Bend clutch system.
After 70,000 miles of comparatively light use, our factory clutch disc, pressure plate, and flywheel were spent! Slippage when only a moderate level of power was applied (not to mention the chatter upon engagement thanks to some pretty pronounced “hot-spotting”) meant that towing anything was off the table. Since this was a work truck, we needed a solution that we could depend on to keep the truck up and running and doing its job. 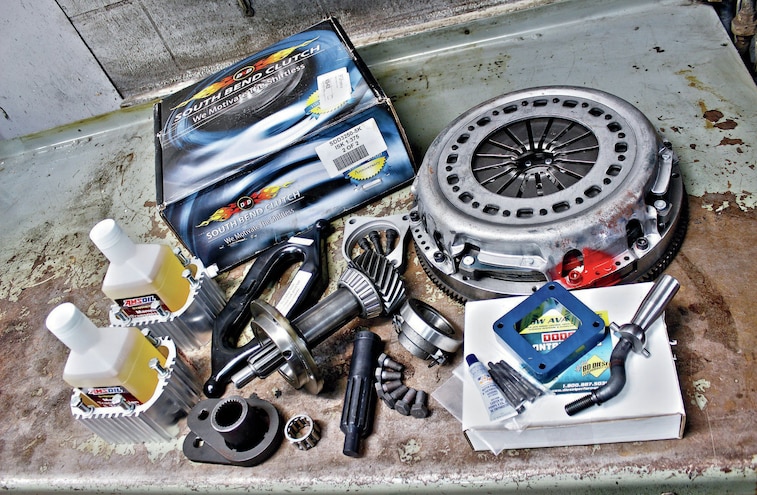 View Photo Gallery | 15 Photos
Photo 5/15   |   Soth Bend Sdd3250 5k Dual Disc Clutch Kit
The South Bend SDD3250-5K Street Dual Disc kit comes with everything needed to upgrade your factory clutch system and transmission input shaft to reliably transfer power from a modded Cummins 6BT in your NV4500-equipped Ram. While we were at it we also installed a pair of Fast Coolers and a BD Diesel Performance Short Shift Kit. The tool in the foreground is used to torque the Fifth gear retaining nut prior to welding it on. Keep reading to see why this is an important step. 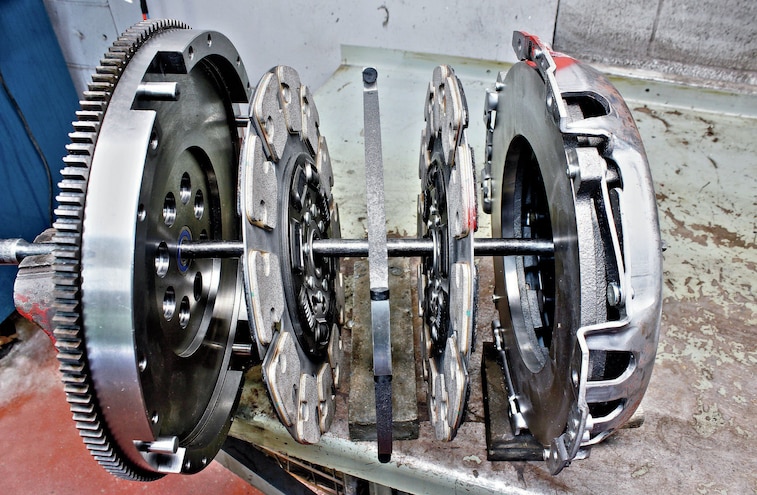 View Photo Gallery | 15 Photos
Photo 6/15   |   Soth Bend Sdd3250 5k Dual Disc Clutch Kit Assembly
When one doesn’t do you must use two. This photo gives you an idea of how the Dual Disc Clutch works, with all the components lined up in their respective order when installed. As an assembly, this clutch kit is massive and heavy and is balanced to ensure smooth operation. Each part gets tagged with red paint, and these marks must line up during installation to maintain balance. 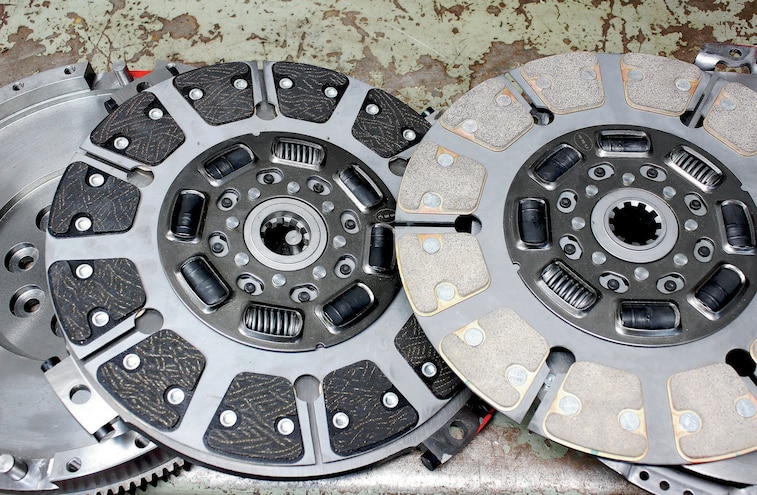 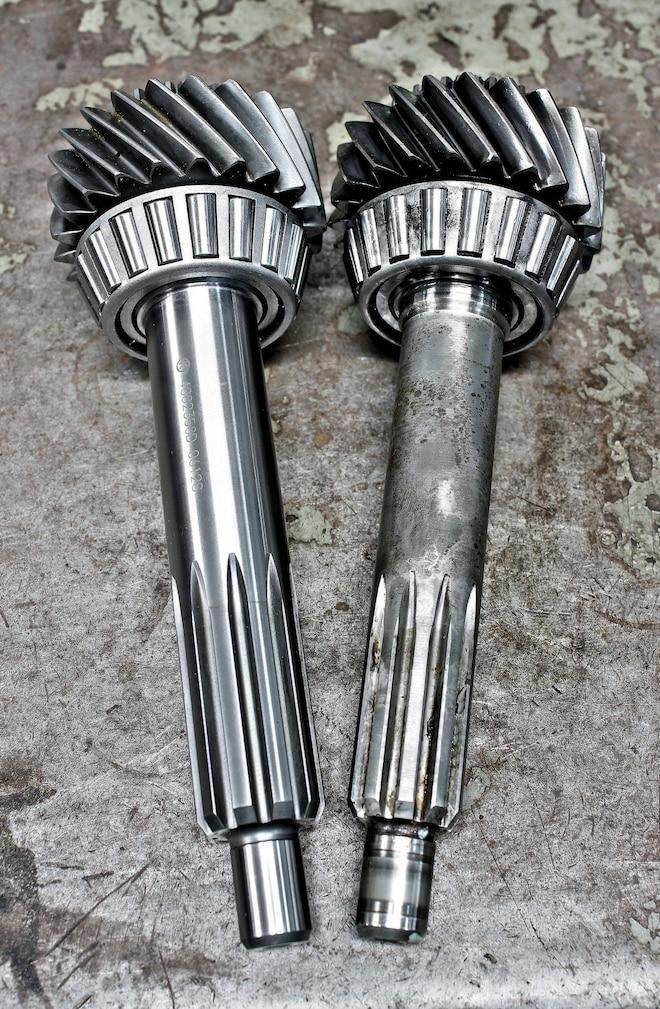 View Photo Gallery | 15 Photos
Photo 8/15   |   Input Shaft Comparison
When ordered as a package, an upgraded 13⁄8-inch diameter input shaft (on left) is part of the program. With the monumental increase in the Dual Disc’s ability to latch onto torque, the larger diameter input shaft assembly will offer insurance against catastrophic failure. Swapping inputs is a super-easy, bolt-in proposition once the transmission is out—unless you need to adjust the shaft’s endplay. 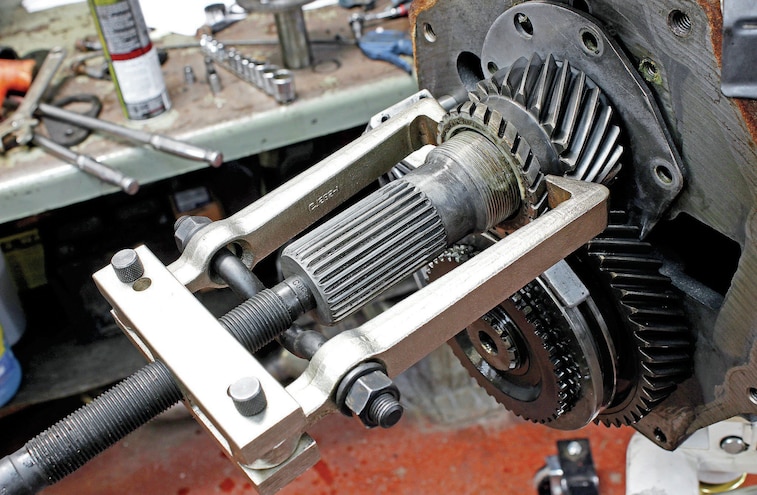 View Photo Gallery | 15 Photos
Photo 9/15   |   Pulling Input Shaft
After checking with a dial indicator, we discovered that our input shaft endplay was a couple thousandths more than the specified range. Rectifying this requires partially disassembling the rear of the transmission to install the requisite shim spacer between the rear bearing and bearing retainer—not something we’d recommend to anyone tackling this chore for the first time. 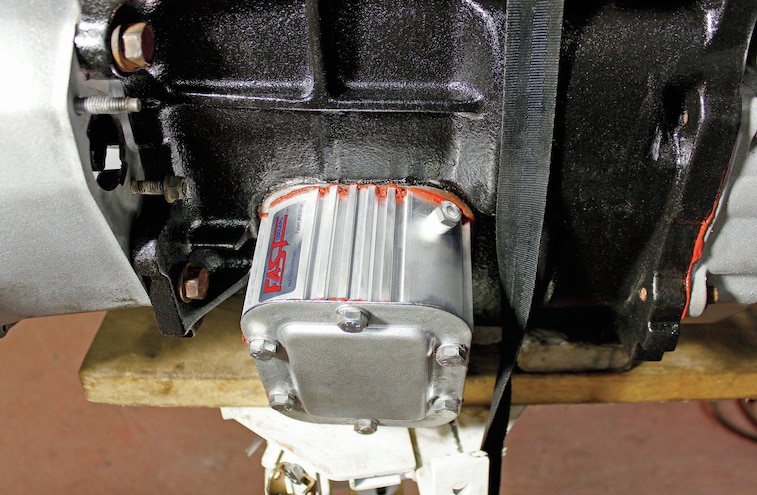 View Photo Gallery | 15 Photos
Photo 10/15   |   Fast Coolers Installed
With a fresh coat of paint applied to the case, we installed a pair of finned-aluminum Fast Coolers to help keep transmission temps in check before hoisting the transmission into place. Essentially a pair of large heat sinks, these coolers get bolted to the factory PTO output bosses on the transmission and add a quart of fluid capacity per side. They represent cheap insurance for your overworked transmission, and we’ve noticed an average of nearly a 30-degree reduction in transmission oil temps since installing them. 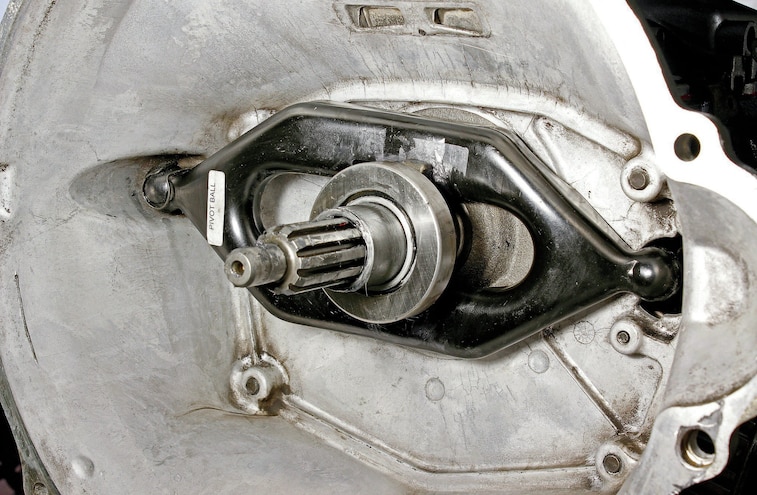 View Photo Gallery | 15 Photos
Photo 11/15   |   Pivot Fork
A new pivot fork and throwout bearing are part of the South Bend kit. However, before you install them, you must unscrew the pivot ball the fork hinges on, remove the washer hiding underneath, and screw the pivot ball back into place to allow clearance for the new fork. A heavy-duty hydraulic master cylinder is an option offered through South Bend, but ours was in good working order so we stuck with the original. An included aluminum spacer for the starter motor also needs to be installed between the starter and bellhousing for proper gear mesh on the new flywheel.
Spend enough time rowing the gears in an NV4500 and you’ll lose Fifth gear. The culprit is usually the Fifth gear retaining nut backs off enough to allow the gear to slide off its splines. A quick-’n’-dirty fix—one that can be done with the transmission bolted in place—is to remove the tailshaft housing, retorque the Fifth gear nut using the special splined socket and spanner wrench, and tack weld the nut to the ’shaft. You’ll hear varied opinions on whether or not this is a good idea and that welding could potentially weaken the hardened mainshaft. We’ve personally witnessed this fix go the distance, so we went ahead and burned the nut on as a preventative measure while it was convenient to do so. 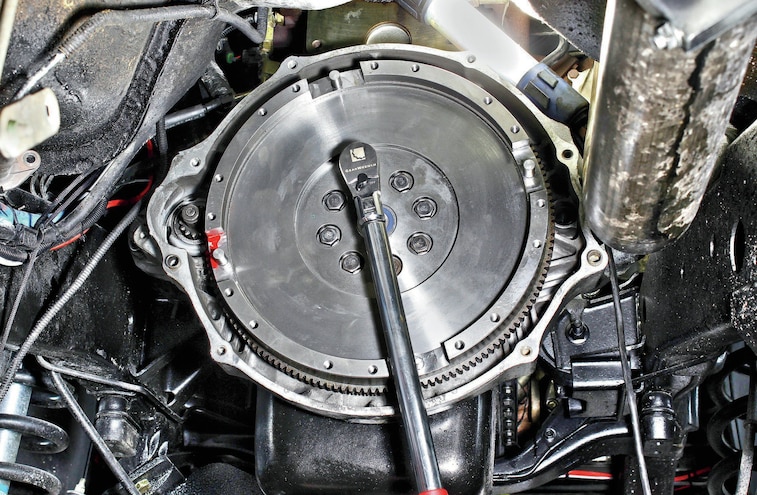 View Photo Gallery | 15 Photos
Photo 14/15   |   Flywheel Install
The last step before hoisting the transmission into place and reinstalling the rest of the driveline was to bolt up the new flywheel and clutch pack. After a liberal dose of red Loctite, the flywheel bolts get torqued to 95 ft-lb. Don’t forget to line up all your red marks on the clutch pack before using the included alignment tool to mesh each component’s splines together and finally bolting it all up to the flywheel. 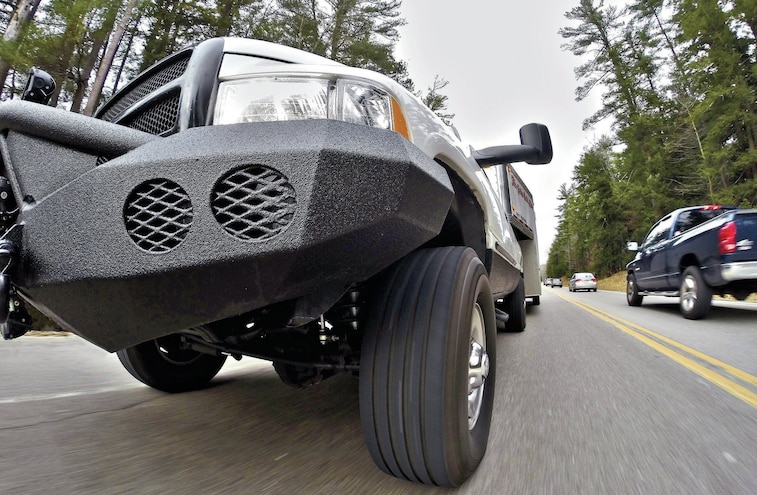 View Photo Gallery | 15 Photos
Photo 15/15   |   Cummins Truck Pulling Trailer
Wrestling with a stock 7,000-pound truck is not a job we’d want if we were a clutch, let alone in a modified Cummins-powered truck that frequently tows heavy loads. Where the factory clutch is easily overpowered in this scenario, the South Bend Street Dual Disc Clutch doesn’t even break a sweat. The slight increase in pedal effort is barely noticeable compared to the factory clutch—you do hear the dual-friction discs and separator plate doing their job at certain rpm levels, but it’s a small price to pay when you need this level of holding power.

- OF
By Ben Battles
1 Articles