Big-3 Blend: Part 1 - How to Combine Ford’s Super Duty With a Cummins/Allison Powertrain 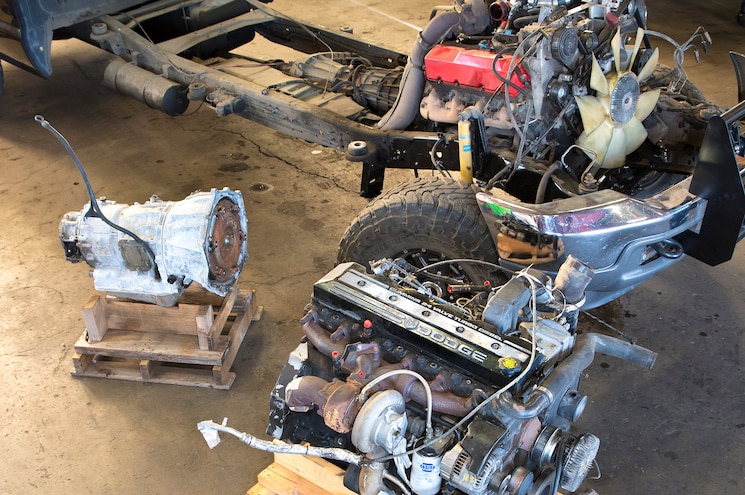 Shawn Smalley and his family were 900 miles from home, pulling a 36-foot toy hauler, when the 7.3L Power Stroke engine in Shawn’s ’01 Ford F-250 let go. What had been a wonderful family vacation riding ATVs and enjoying other outdoor adventures had suddenly taken a very costly nosedive. It was decision time.
Like many other Super Duty owners over the years, Shawn had a tough decision to make: rebuild the blown engine or get rid of the truck and buy another—a costly proposition either way. His 4x4 Crew Cab had nearly 230,000 miles on the odometer, both truck and engine were well maintained, the body was straight, the interior comfortable, and the chassis tight. 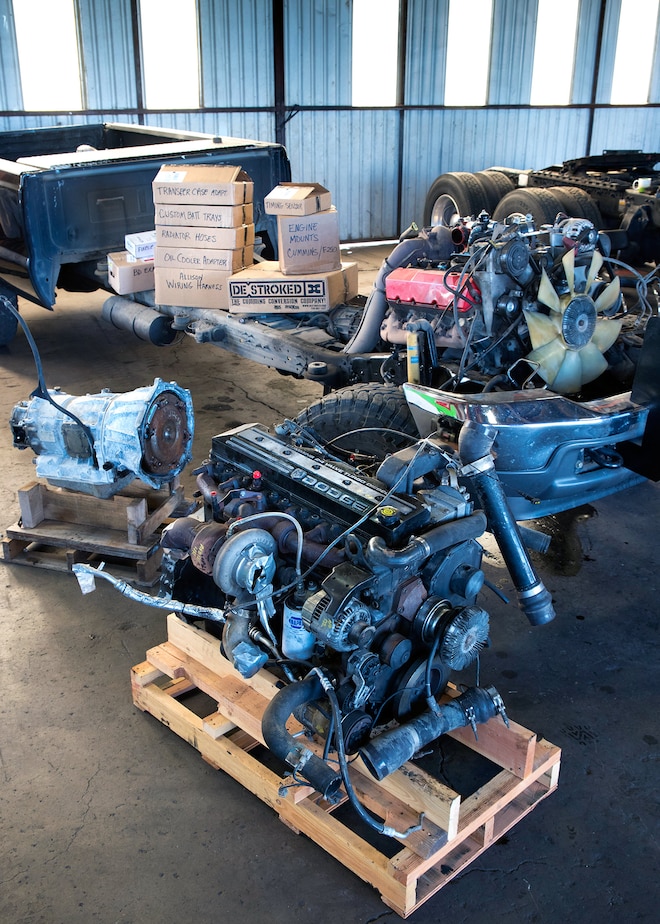 View Photo Gallery | 16 Photos
Photo 2/16   |   Ford Cummins Swap
But Shawn had reservations about the 7.3L Ford and how it would hold up even after a complete rebuild. The repairs would cost more than $10,000 by the time the machine work was done and everything else was considered. That’s when he decided a third alternative would better suit his needs: replace the dead Power Stroke with a 24-valve, 5.9L Cummins powerplant and, at the same time, ditch the Ford automatic transmission for an Allison unit.
Mixing parts from other brands may seem sacrilegious to die-hard Blue Oval fans, but Shawn isn’t fazed by the crossbreeding. It’s all about practicality and long-term goals. “It makes sense,” says Shawn, who also is the owner of Mobile Diesel Service in Oakland, Oregon. “Ford’s Super Duty cabs are roomy and comfortable and don’t start rattling like Chevys and Dodges do as they get older. The 24-valve Cummins is simple and reliable compared to the Ford, cheaper to repair, cheaper and easier to hot-rod, and it should last a million miles. 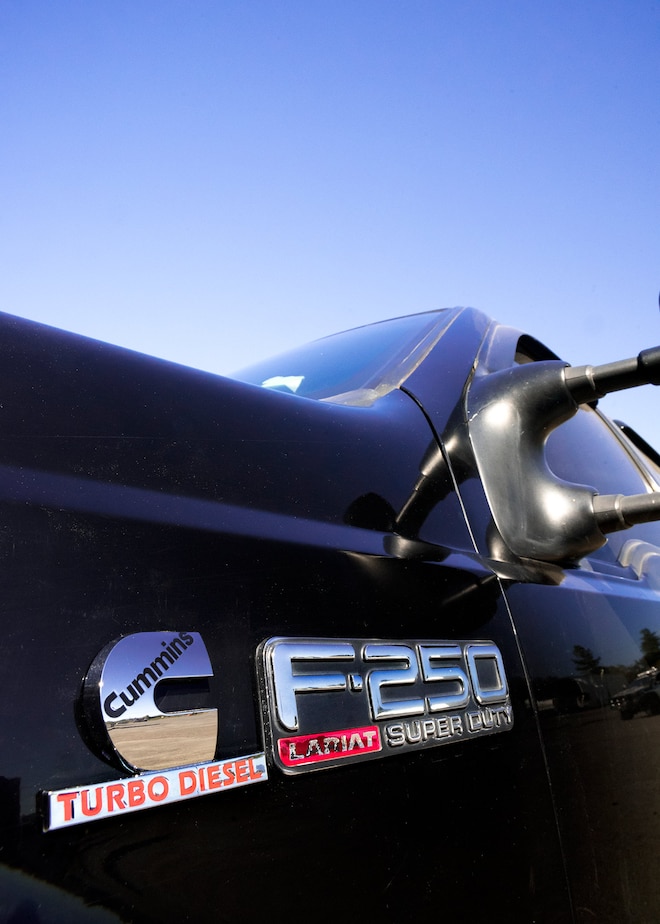 View Photo Gallery | 16 Photos
Photo 3/16   |   Cummins F 250 Diesel
“And the Allison? It’s well known for its reliability and toughness. So, for me, doing the conversion instead of dumping money into rebuilding the 7.3L is a triple win. My plan is to keep this truck around for another 15 years, and the added cost of the conversion is cheaper than buying a used Super Duty.”
Getting It Done It’s not difficult to find used Cummins engines and Allison transmissions, because millions of each have been produced over the years. Shawn needed to make only a couple of phone calls to track down an ’01 5.9L engine, wiring harness, and an Allison 1000 automatic (all with relatively low miles), for a total cost of $5,500.
Since finding the engine and transmission is easy, what about all the parts needed to mate Ford with Cummins with Allison? That can be a little trickier. We called Aden McDonnell at GOS Performance to get the answers. His company in Livingston, Montana, has been doing Ford/Cummins/Allison conversions for more than a decade, and he knows every nuance of “de-stroking” a Super Duty.
GOS Performance is also the storefront for DeStroked, a supplier of parts and complete kits for diesel conversions, be it replacing a Power Stroke or Duramax powerplant with a Cummins or adapting an Allison automatic transmission to a Super Duty or a Dodge Ram.
That’s why Shawn turned to GOS Performance for his Ford/Cummins/Allison conversion, which we’re following from start to finish. It doesn’t matter whether you call the end result a “Fummins,” “Cord,” or even a “CF-250,” the bottom line is, we think it’s very likely that a truck built this way will be around for a lot of years. 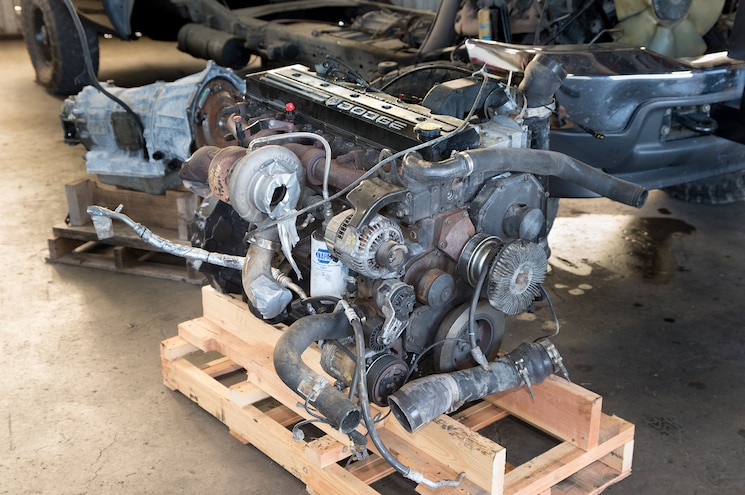 View Photo Gallery | 16 Photos
Photo 4/16   |   Used Cummins engines are plentiful. Look for one with low miles and complete with the wiring harness. We picked this one up for $3,500, and it’s certified to be in good running condition. 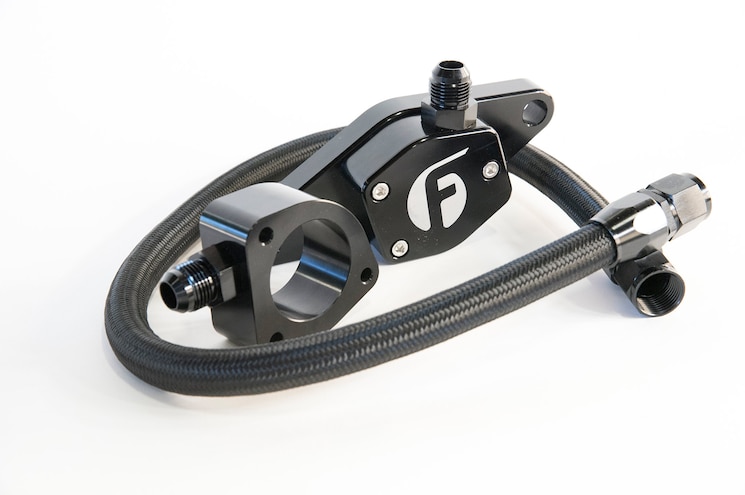 View Photo Gallery | 16 Photos
Photo 11/16   |   Cummins I-6 engines are known to have some cooling issues with the rear two cylinders. We’re eliminating those concerns by installing this Fleece Coolant Bypass kit. 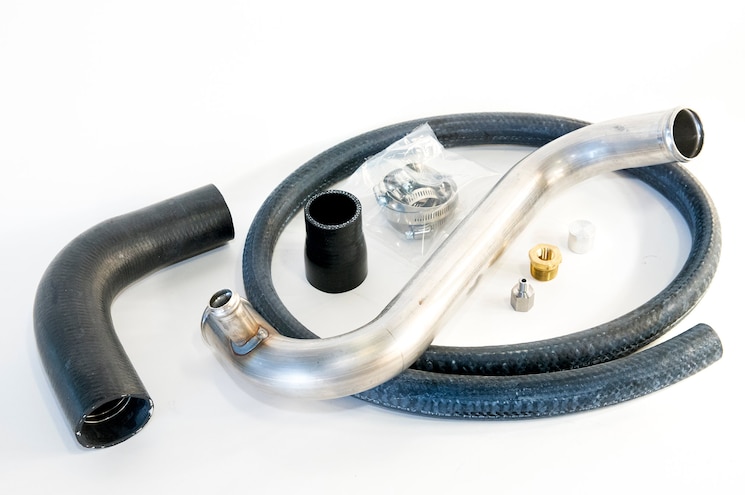 View Photo Gallery | 16 Photos
Photo 15/16   |   Another item in the conversion package that helps makes the swap easier is this lower radiator hose kit, which eliminates the need for running to the parts house to track down the correct fittings and hoses.