The newest diesel engines and powertrains offered by GM, Ford, and Dodge have energized diesel-pickup enthusiasts and aftermarket manufacturers alike--for good reason. Performance has entered a whole new realm, and these current diesels have a lot of potential.

The Duramax 6600 diesel engine and Allison 1000 Series five-speed automatic transmission first became available in the 2001 Chevy/GMC 2500HD/3500 Silverado and Sierra. Since then, the Duramax and Allison have helped GM gain market share by establishing an excellent reputation for power and durability. While we know the Duramax can tow and haul, we're just beginning to learn about its true hot-rod capability. 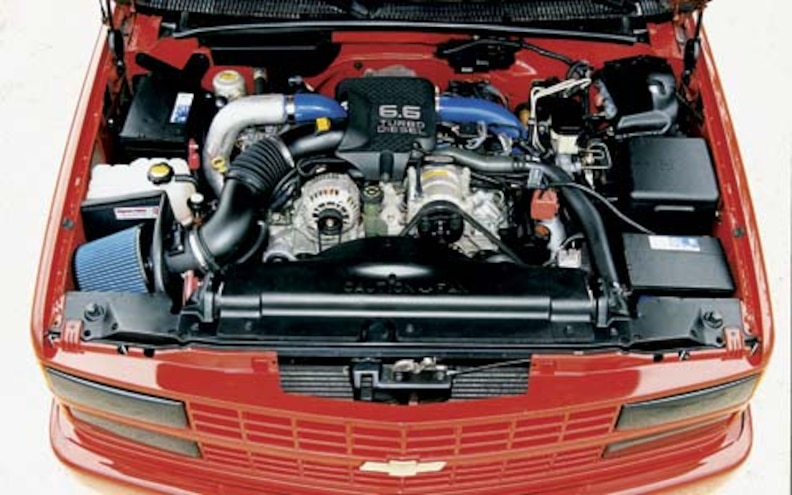 View Photo Gallery | 9 Photos
Photo 2/9   |   The layout of all underhood components closely matches that of a new truck. A modified 2002 Dodge Cummins intercooler was added behind the grille. Space is limited, but there's room for a full-width intercooler and a custom A/C condenser, with minor mods to the grille and parking-light assemblies.
The lightest diesel pickup available from GM would be a standard cab 2WD heavy-duty 3/4-ton, which weighs approximately 5800 pounds. Extended cab, crew cab, and 4WD models weigh proportionally more--approaching 7000 pounds. However, even these weighty diesels have produced quarter-mile performance in the 12-second range when using the right combination of aftermarket power products.
Taking performance to the next level involves shedding weight, which means if you want a lightweight GM diesel hot rod, you'll have to build it yourself. Our truck is a 1989 Chevrolet Silverado K1500 flareside 4x4, equipped with a new 2002 Duramax 6600 crate engine, an Allison, and an NVG263 pushbutton transfer case obtained from GM Powertrain. This project was created to explore the performance potential of the Duramax 6600 and Allison automatic when fitted to a lightweight yet street-legal full-size 4x4 truck, having a race weight in the neighborhood of 4700 pounds.
How fast is it? When this truck first hit the streets earlier this year, it was still equipped with the original 10-bolt half-ton rear differential. By the time this story was written, a beefier custom rear diff with a locker and disc brakes was in the pipeline. The 10-bolt is only marginally strong enough at stock power levels and would be inadequate once the engine is broken in and horsepower is doubled. However, who could resist doing some preliminary testing? When launching with only a mild powerbrake (to protect the stock rear diff), this truck will peel off 0-to-60 times in seven seconds flat and quarter-mile times in the low 15s at nearly 100 mph, when using factory programming for 300 horsepower and 520 pound-feet of torque. (The only performance mods completed so far include installation of a Magnum Force air-intake system from U.S. Diesel Parts and a Kennedy Diesel four-inch custom exhaust.) To put these performance numbers in perspective, we tested a stock 2001 Duramax-equipped GMC crew cab shortbox 4WD 2500HD weighing 6550 pounds. It produced two-second-slower 0-to-60 and quarter-mile times.

The process of converting the project truck--with its original 5.7-liter gas engine and TH700R4 automatic--to Duramax/Allison power began in spring 2002. Determining the fit of the engine and transmission and fabricating custom motor mounts happened rather quickly. However, the project stalled once we began to ponder the electrical/electronic aspect of the conversion. It wasn't until fall 2003 that a decision was made to strip the truck of the original dash and electrical system and install all-new components to match the new engine and trans. Except for the tail- and headlight harnesses, essentially all of the truck's original electrical system was ripped out and replaced with new factory wiring harnesses, junction blocks, and fuse panels. To complement the new electrical system, a 2001 model-year instrument-panel cluster and dash assembly were installed to update the appearance of the interior and to correctly interface with the Duramax and Allison.

View Photo Gallery | 9 Photos
Photo 3/9   |   The Allison is much larger than the original TH700R4, but it fits the C/K chassis surprisingly well, requiring only minor adjustments (no cutting) to the transmission tunnel. As a point of reference, the Chevy/GMC TH400 and 4L80-E bell housing and flexplate bolt patterns are the same as those used by the Allison.
Work started in earnest in December 2003 and continued nonstop through May. When added to the time required to fit the engine/trans to the 1989 chassis, the powertrain conversion took approximately six months.
What's next? Once the new rear differential and traction bars are installed, the real performance testing can begin. Plans are to take the engine to at least 600 horsepower, using a combination of currently available aftermarket power products. Diesel-pickup quarter-mile times have steadily fallen as diesel-engine technology improves and the aftermarket makes more strides in horsepower and torque gains. We think this Duramax is up to the challenge, and a full report will appear in a future issue.
Tracking Down Parts
New engines and transmissions are available directly from any GM dealer. If you're resourceful, you may find a used Duramax diesel engine, Allison transmission, and even an occasional complete conversion package on eBay. It's also possible to locate good used individual parts through a salvage center, or you can buy a complete salvage vehicle, which would contain all the factory components needed for a conversion project.

View Photo Gallery | 9 Photos
Photo 4/9   |   This is how it all started. The 1989 Silverado is shown here in original condition, and the Duramax and Allison have just arrived.

View Photo Gallery | 9 Photos
Photo 5/9   |   Aside from the new dash, the interior was updated with 1995 Suburban six-way power lumbar leather seats and console. Graphite carpet was laid, a gray headliner was installed, and all interior trim panels were painted to match.

View Photo Gallery | 9 Photos
Photo 6/9   |   This is a purpose-built truck--it's not built to tow or haul, but to allow the Duramax and Allison to perform to their full potential. Compared with the original 5.7-liter gas engine, the new powerplant has up to three times the power, twice the fuel economy, and lower emissions.

- OF
By Jim Bigley
2 Articles