Put the Power Down 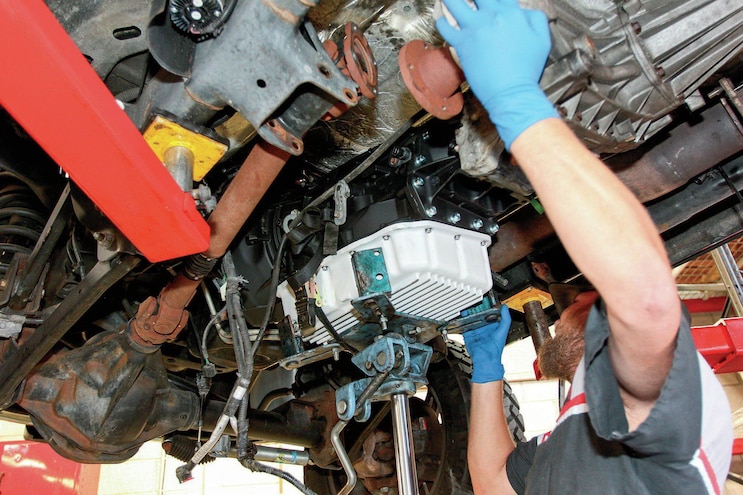 The automatic transmission has been a given option through most our time behind the wheel, but that wasn’t always the case. In the early ’30s there was no such animal.
The main purpose behind any transmission is gear reduction to enable usable torque at the drive wheels, with the limited amount of engine power to back it up. Picture a rear-wheel-drive car with one end of the driveshaft bolted to the crankshaft and the other to the rear axle. You’re going nowhere fast—like taking off from a stop in Fifth gear.
With the use of gear reduction and a clutch, manual transmissions solved the problem. A simple example of gear reduction is a two-gear train. A smaller diameter drive gear (ten gear teeth), which is turned by the engine, is meshed with a larger diameter driven gear (20 teeth). This produces a 2 to 1 gear ratio (2:1). The driven gear will turn in the opposite direction of the drive gear and at half the speed. Although the process reduces speed, it’s doubling the torque (or twisting force) now available at the driven gear. The driven gear rotates the driveshaft, in turn the real axle. The ring-and-pinion gears inside the rear axle apply additional gear reduction, and with tire diameter included in the equation, this gives us a final drive ratio. With these numbers, vehicle speed can actually be determined by engine rpm. 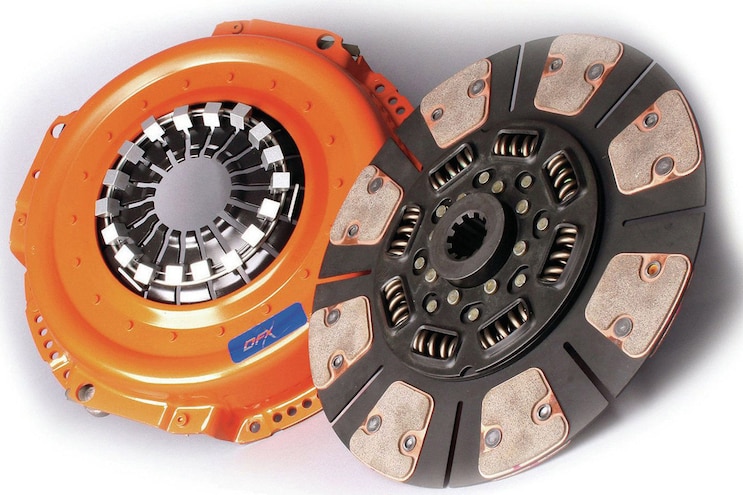 View Photo Gallery | 14 Photos
Photo 3/14   |   Shop Centerforce Clutch
No matter the gear ratios, we still need some help taking off from a stop and shifting gears. That’s where the typical clutch comes into play. It’s comprised of a clutch disc surfaced with friction material (just like brake pads) and splined to the transmission’s input shaft (main shaft). The disc is sandwiched between the flywheel and a pressure plate, which are both attached to the engine’s crankshaft. With your foot off the clutch pedal, the clutch is engaged, meaning the spring-loaded pressure plate is clamped down on the disc locking it to the flywheel. When pushing down on the clutch pedal a release bearing applies force to the pressure plate springs and releases the disc, unlocking the transmission from the engine. While varying engine speed with clutch pedal application we can produce smooth takeoffs and shifts. 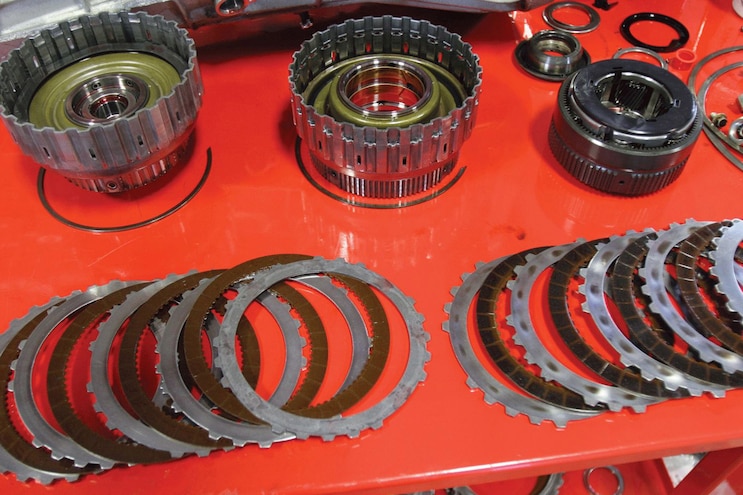 The theory behind just dropping a transmission into gear and driving started at the beginning of the 20th century, but the first mass-produced automatic didn’t happen until 1939. General Motors’ Hydra-Matic became available as an option on ’40 Oldsmobile models. It was a four-speed plus reverse with a fluid coupling that enabled automatic up and downshifting, while keeping the engine running at a stop while in First gear or reverse. 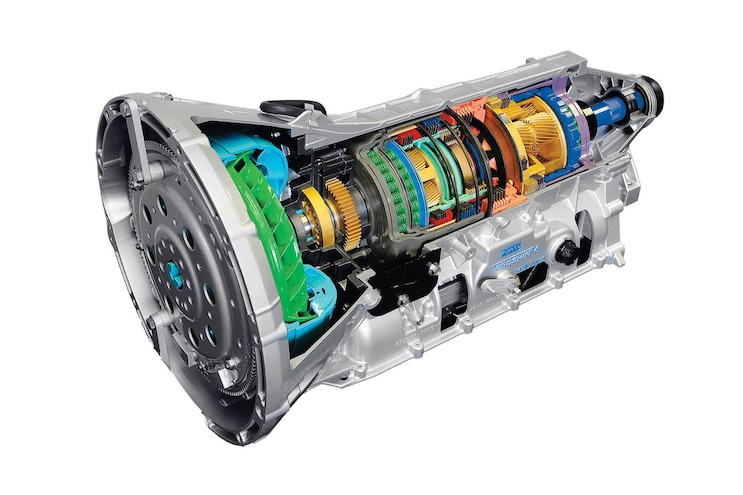 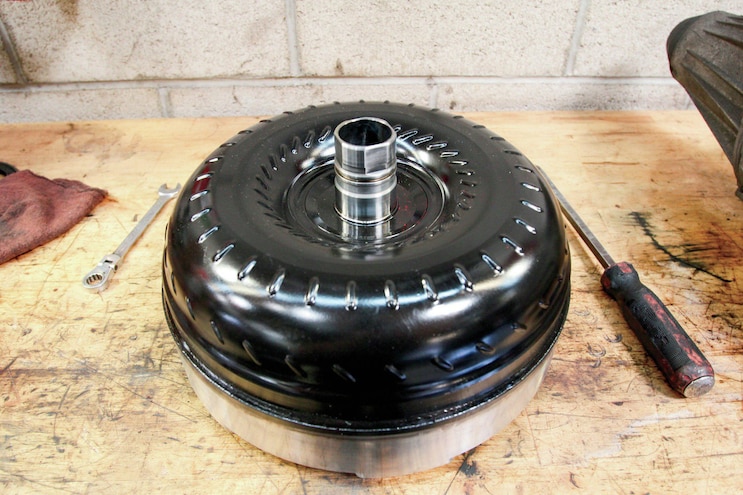 View Photo Gallery | 14 Photos
Photo 6/14   |   Shop Triple Disc Torque Converter
The torque converter or fluid coupling eliminated the need for a clutch to produce a smooth takeoff from a stop with the use of hydraulics, as opposed to a mechanical connection between the engine’s crankshaft and transmission.
Internally, the torque converter uses an impeller (driven by the engine), a turbine which drives the transmission, and a stator in-between that directs fluid flow returning from the turbine to the impeller. The blades of the impeller push fluid at the turbine blades, forcing the turbine to spin and drive the transmission. The stator channels the fluid coming back from the turbine in a direction that enhances the rotation of the impeller. This is what makes torque multiplication possible. 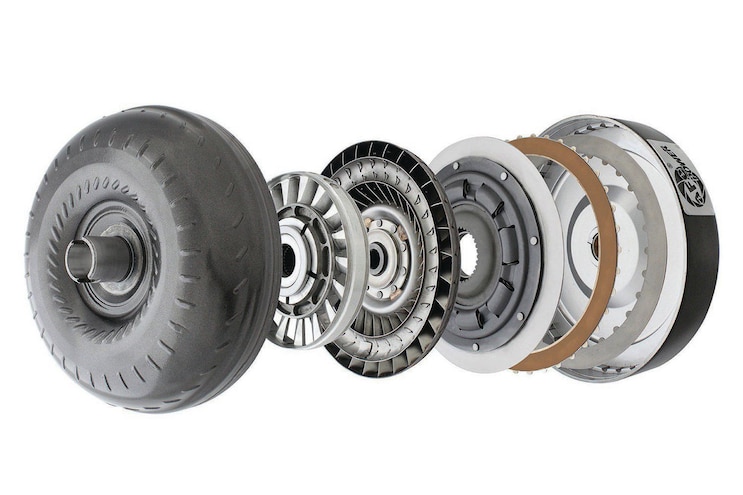 View Photo Gallery | 14 Photos
Photo 7/14   |   Shop Torque Converter Basics Pulled Apart
The stall phase of the converter is what keeps an engine running at a stop. The impeller is still rotating with the engine while the turbine is at a standstill, but torque multiplication doesn’t occur until higher engine speeds. Therefore there’s minimal load on the engine that permits idle.
Modern torque converters use an internal lockup clutch that mechanically connects the engine to the transmission under high-speed low-load conditions to increase efficiency. 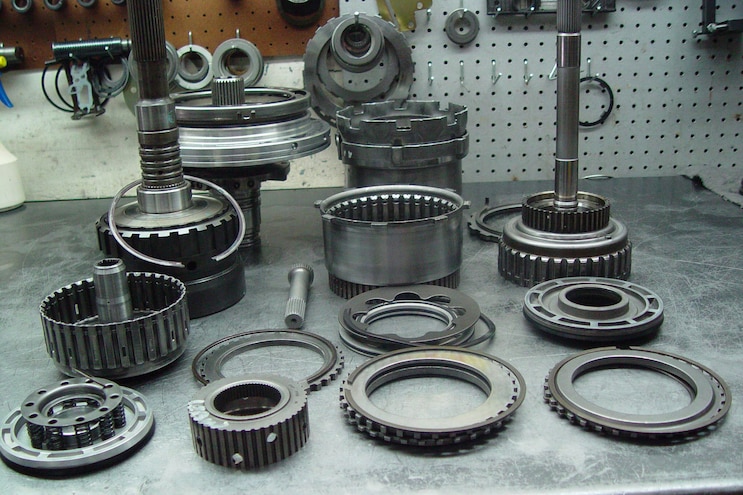 Manual transmissions use side-by-side shafts and gears to provide shifting of ratios, but most automatics go a different route. Instead the input and output shafts are placed end-to-end with the use of a complex network of gears inside of gears.
A simple planetary gearset includes a sun gear; planet gears and a carrier; and a ring gear, used in conjunction with other planetary sets.
No more shift forks—shifting occurs with hydraulic pressure applied to internal clutches, and servos which contract bands around specific clutch housings. All components are positioned in line with the input and output shafts. 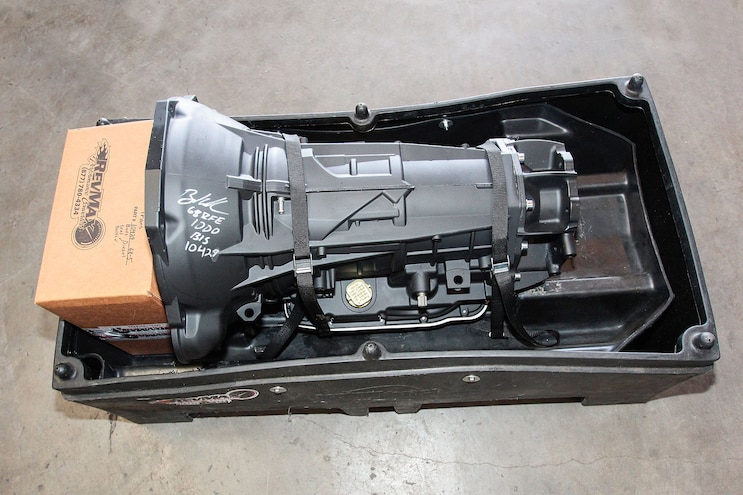 Automatics utilize hydraulics everywhere they can, with pressure produced by an internal pump. Clutches and bands applied and released to produce gear shifting are controlled by a valve body. The valve body includes a large number of spring loaded hydraulic valves. Example: Pressure is applied to a shift valve causing it to move to one side against spring pressure and then routes hydraulic pressure though passages to the specific clutch or band to accomplish the correct shift.
Prior to computer control, shift force and timing (how hard and when a shift takes place), was determined by vehicle speed, throttle position, or vacuum, which reflected load on the engine.
• Manual Valve
The manual valve is just that, positioned by the shifter to determine driver’s preference on gearing. Typically L1 or L2 apply clutches or bands to provide engine braking on deceleration while preventing further upshifting.
• Governor
A spring-loaded valve attached to the output shaft controlled by centrifugal force. The faster the output shaft spins the greater the pressure allowed through the valve. This provides pressure relative to vehicle speed to help determine shifts applied by the valve body.
• Throttle Valve
The governor supplies vehicle speed relevant pressure to aid in automatic shifting, but pressures determined by engine load must also be applied to shift accurately. A throttle valve is controlled by a cable or linkage moving with throttle position. Traveling at 55ph in Fourth gear and you apply full throttle, the transmission will downshift to Third or Second with high pressure at the needed clutch or band to provide the performance shift. This is due to the high throttle pressure received by the valve body, in relation to governor pressure.
• Vacuum Modulator
The modulator uses a rubber diaphragm with engine manifold vacuum applied to control the throttle valve. This is another means of determining engine load used on certain models.

All currently produced passenger cars and light-duty trucks are equipped with electronically controlled transmissions, either by means of the powertrain control module or an independent transmission ECU.
The base hydraulics of an automatic transmission remain intact, but electronic solenoids, sensors, and switches are used, which eliminate the need for a governor, throttle valve, and related fluid passages and valves.
Now control units use electronic sensor inputs through an algorithm to determine shift timing and pressures before commanding shifts with electronically controlled valves. The more information available, the more accurate and efficient transmission operation becomes.
Input and output shaft speed sensor data is used not only to provide vehicle speed, but can also determine if a transmission slipping. Engine vacuum, mass airflow, throttle position, coolant temperature, and others add to the mix to increase efficiency and determine failures.
An example of transmission control aiding in engine efficiency is late shifting after a cold engine start. Warm engines burn the cleanest with highest mpg. Late shifting increases engine rpm to reach normal operating temperature as quickly as possible. 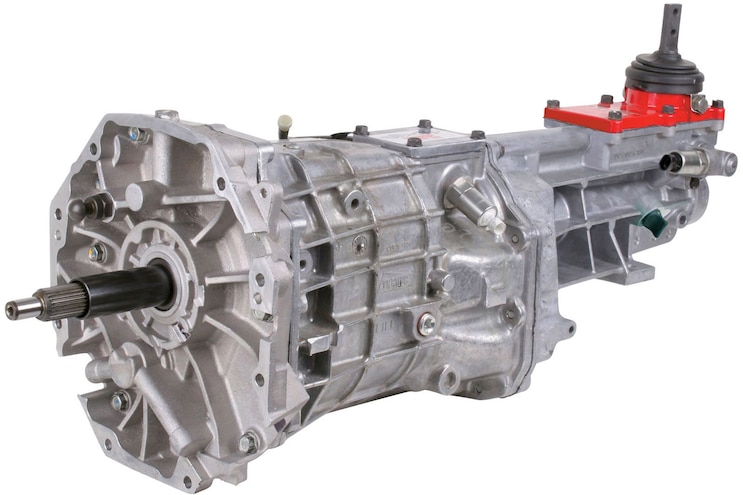 There are several different configurations, dependent on engine positioning. Transaxles mostly apply to front-wheel-drive applications.
It’s basically combining a transmission and differential in the same transmission case. Two axles (halfshafts) come out of the unit directly to the drive-wheels, as opposed to a single driveshaft to an independent rear axle/differential. 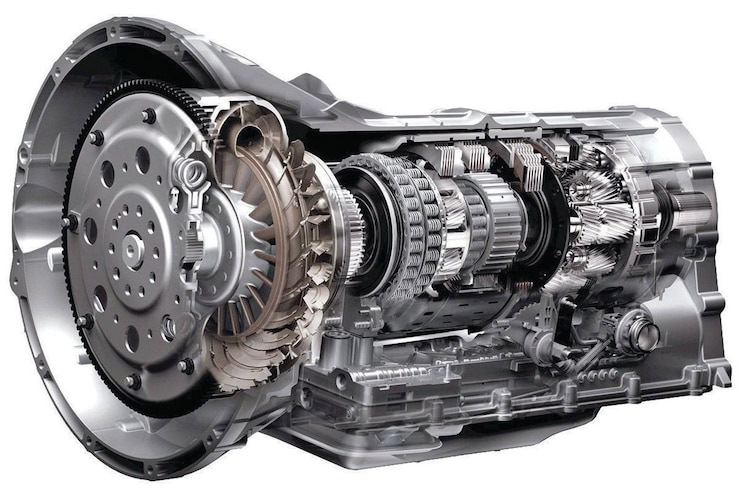 There are several different designs, but the most common in automotive use is VDP (variable-diameter pulley).
Let’s go back to the manual transmission’s side-by-side main shaft and counter shaft; a CVT is the same thing, but not with multiple gears with teeth. Instead a steel V-belt is used between a drive and driven pulley.
The widths of the pulleys are variable. When the drive pulley is at its widest position and the driven pulley at its narrowest, we’re in a high gear ratio position.
Due to the V shape of the belt and angle of the two pulley halves, when the drive pulley is narrowed its diameter increases as the belt moves outward. The opposite takes place at the other end of the belt at the driven pulley. The pulley halves become wider and the belt moves inward. This process effectively changes gear ratios in a seamless manner. The widening and narrowing of the pulleys is accomplished with hydraulic pressure or electronically controlled by the PCM or transmission control unit with the use control solenoids.
The CVT is more efficient than an automatic using planetary gearsets for two reasons. One is the nearly unlimited number of gear ratios that can be applied while driving and varying pulley diameters, instead of the limitations of a four-, five-, or six-speed. The other is the momentary loss of torque when shifting gears. A CVT retains constant contact between the torque converter and drive wheels. 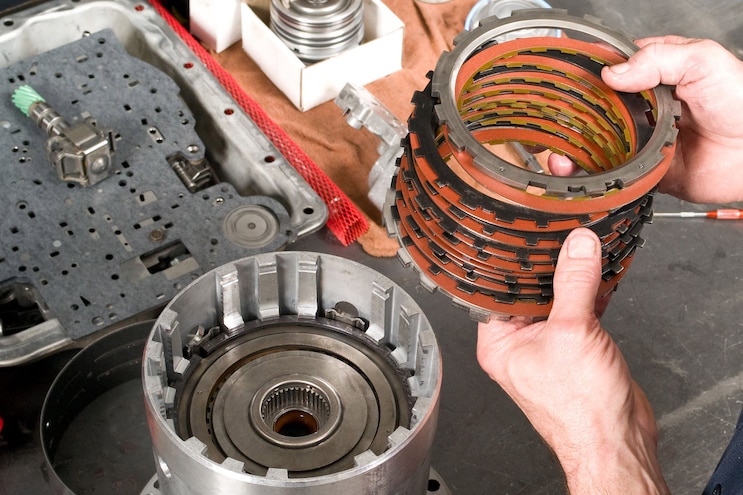 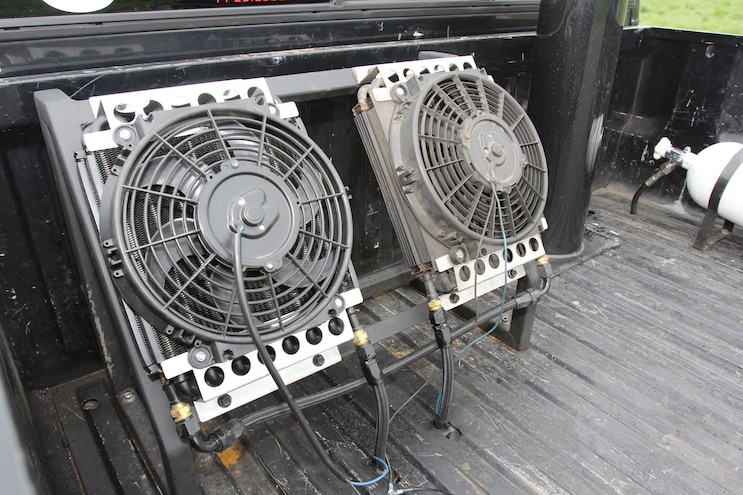