Traction When You Need It 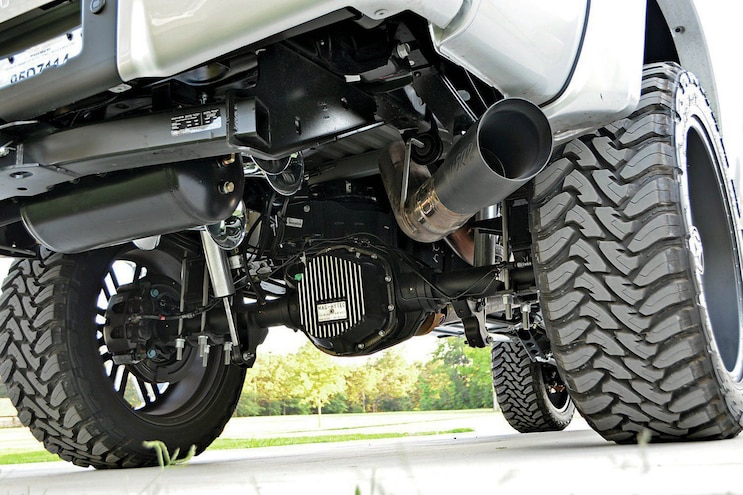 Traction is pretty much doubled between tires and street (or dirt, rocks, mud, snow, and so on) by driving four wheels instead of two.
Let’s start with the basics of an American-built pickup we’ve known forever. We’ll take a plain-Jane two-wheel-drive and add the necessary components to build a four-wheel-drive truck.
For argument’s sake, we’re working on a rear-wheel-drive ½-ton pickup with a V-8 bolted to a four-speed automatic. The transmission’s output shaft is splined to the front yoke of the driveshaft, which is bolted at the other end to a solid rear drive axle with two U-joints in between to compensate for various real-world driveline angles. The rear drive axle includes a limited-slip differential, with left and right axleshafts driving torque at the rear wheels. Objective: We want to drive the front wheels at the same time.
To do this, we need another driveshaft aimed forward and linked to a front drive axle turning the front wheels. This is accomplished with a gearbox affixed to the rear of the transmission. The added box is referred to as a transfer case. 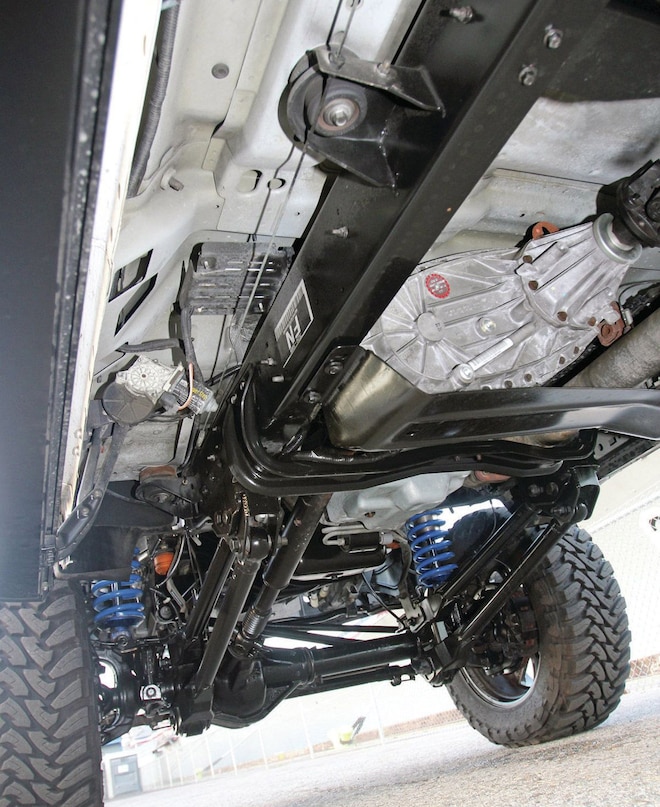 View Photo Gallery | 14 Photos
Photo 2/14   |   Shop Class How Four Wheel Drive Works Transfer Case
In our example, the transfer case is a two-speed gearbox, which is typically chain- or geardriven. The transfer case gives us a choice of two-wheel high, four-wheel high, or four-wheel low engagement (plus neutral on many trucks). Two-wheel high disengages the front driveshaft and axle, using a direct drive between the transmission and rear differential for street driving. Four-wheel high engages the front driveshaft and axle, but maintains the same 1:1 gearing for higher speeds. Four-wheel low is the fun part: Thanks to a gear reduction in the transfer case, all four wheels are driven through a significantly lower gear ratio, typically ranging from 2.72:1 to 4:1, increasing torque at the wheels for low-speed off-road conditions.
The front wheels are connected to their respective axleshafts by locking hubs. The simplest of these is a manual design that requires the driver to get out of the vehicle and turn the hubs one quarter-turn to engage them with the drive axles. An advantage to this is the front wheels can be totally disengaged from their axleshafts when in two-wheel drive, reducing friction and improving fuel efficiency. They also tend to be a bit more reliable.
Some part-time four-wheel-drive vehicles offer automatic locking hubs that connect the front wheels to the drive axles. These hubs operate by closing on the drive axles when they start to turn, usually through a slide lock. To disengage the hubs from the drive axles when in two-wheel drive, reversing the truck a few feet moves the slide lock back to the open position. These offer a few advantages, the foremost among them convenience and shift-on-the-fly capability. However, they can be less reliable and may exact a fuel-economy penalty. 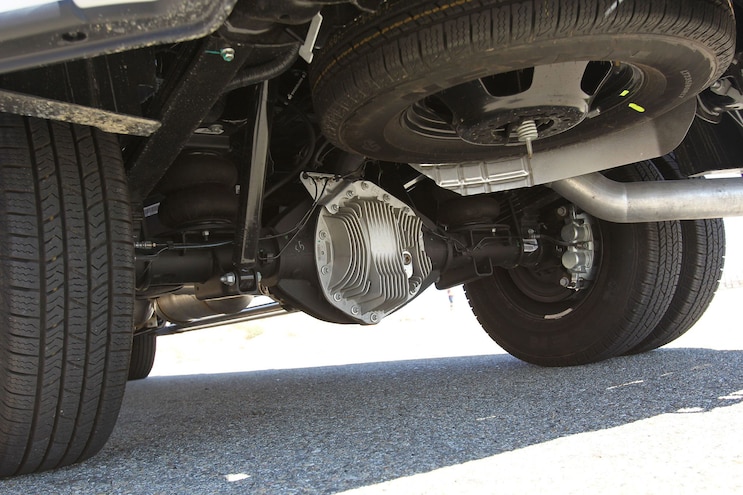 Before we go any further, let’s review the function of a differential. An open differential is what allows a vehicle to freely make turns. The driveshaft rotates the differential’s pinion gear, which turns a ring gear bolted to the differential housing (carrier). This converts the rotation of the driveshaft 90 degrees to outward rotation at the left and right axleshafts—and, in turn, the wheels. When making a left turn, the right wheel must rotate at a higher speed than the left because it’s covering more ground. If the axleshafts were locked together at the differential, the right rear tire would skip or drag on the pavement. It’s forced to rotate at the same speed as the left.
Inside the differential’s carrier housing are four gears that make everything work. Two side gears splined to the axleshafts meshed with two spider or pinion gears affixed to the carrier. This allows the left and right axleshafts to rotate at different speed, enabling free turning.
The open differential is a great device with one significant drawback: It permits the wheel with the least traction to spin, while the other remains stationary. We’ve seen it before, one wheel on a patch of ice and the other on dry pavement. The wheel on ice spins, the wheel with good traction doesn’t, and you’re going nowhere fast. 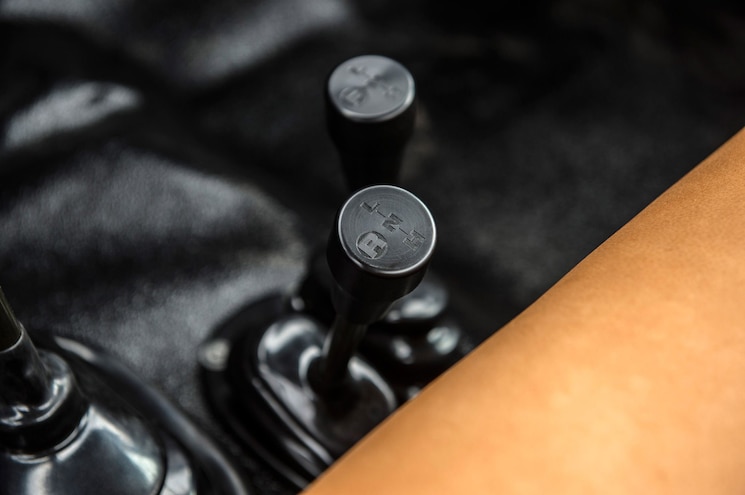 View Photo Gallery | 14 Photos
Photo 4/14   |   Shop Class How Four Wheel Drive Works
That’s where a limited-slip differential comes into play. A common method is the use of spring-loaded clutch packs. The clutches keep the two axleshafts semi-locked together under a specified pressure. Going back to the “one wheel on ice” scenario, the locking pressure will continue to distribute some torque to the wheel with good traction and hopefully get the vehicle off the ice. Meanwhile, when traction is equal at both wheels, the clutches slip at a defined torque range and permit smooth turning.

Our hypothetical pickup is considered part-time four-wheel drive because the transfer case allows the option of two-wheel drive. When engaged in either four-wheel drive position (high or low), the front and rear driveshafts are locked together and turning at the same speed. This is the ultimate for low-traction conditions, but it’s a worst-case scenario on sticky pavement. Just like a drive axle with its axleshafts locked together would cause wheel skip during turns on dry pavement, the same thing applies front-to-rear when a part-time transfer case locks the front and rear drive axles. So on a part-time system, four-wheel drive should only be used under low-traction conditions. Otherwise, drivetrain damage is bound to happen. 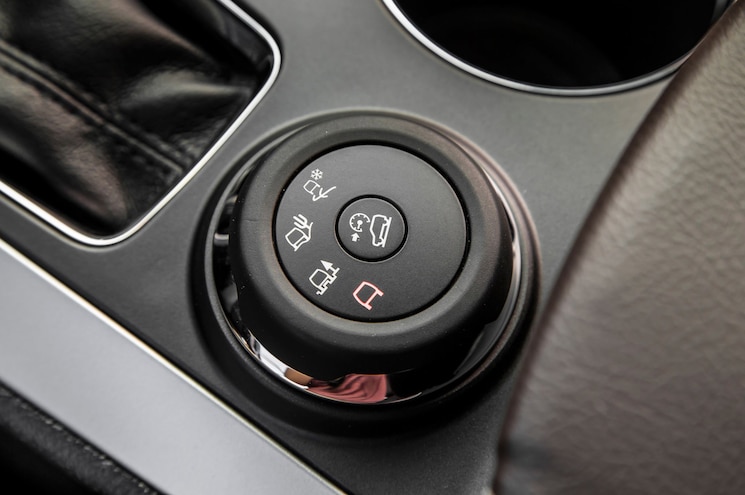 Full-time four-wheel drive uses the same basic setup as part-time with the elimination of locking and unlocking hubs at the front drive axle, no more two-wheel drive engagement, and the addition of a differential within the transfer case to allow both front and rear axles to remain engaged at all times. Full-time is always driving four wheels, but allows for different wheel and driveshaft speeds front to rear. This is another example of an open differential’s limitations. Using the ice patch example, going up an inclined driveway and both front tires hit the ice patch, the front tires spin and we lose torque at the rear wheels. Just like a drive axle, the addition of a limited-slip mechanism at the transfer-case differential improves the situation considerably. This enables full-time four-wheel drive to be used in all traction conditions while continuously driving four wheels.
Some full-time systems incorporate the ability to fully lock the driveshafts at the transfer case at low speeds. This eliminates any disadvantage compared with part-time four-wheel drive during off-road use. Low-speed locking of rear axle shafts and front axle differentials is also an option on certain models.

All-wheel drive is similar to full-time four-wheel drive, minus the two-speed transfer case. Some all-wheel-drive systems are virtually front-wheel drive the majority of the time, until torque is applied to the rear drive axle when conditions warrant.
Current technology uses torque vectoring on some all-wheel drive vehicles. Torque vectoring distributes torque to each drive axle and/or wheel dynamically, when needed. This is accomplished by a network of electronic-control units utilizing data such as wheel speed, yaw rate, throttle position, and so on. Following a super-fast algorithm, commands are sent to adjust torque applied by automated differentials, in conjunction with braking and electronic throttle control as used with stability and traction control systems.
An example of torque vectoring at a differential is the use of an ECU-controlled electric motor at each of the two clutch packs. Rotation of the motor positions a cam to vary clutch pressure, and therefore which axle gets the correct amount of torque to optimize traction and handling under a given condition. For example, Acura’s SH-AWD system applies a bit more torque to the outside rear wheel when cornering, improving stability and grip. 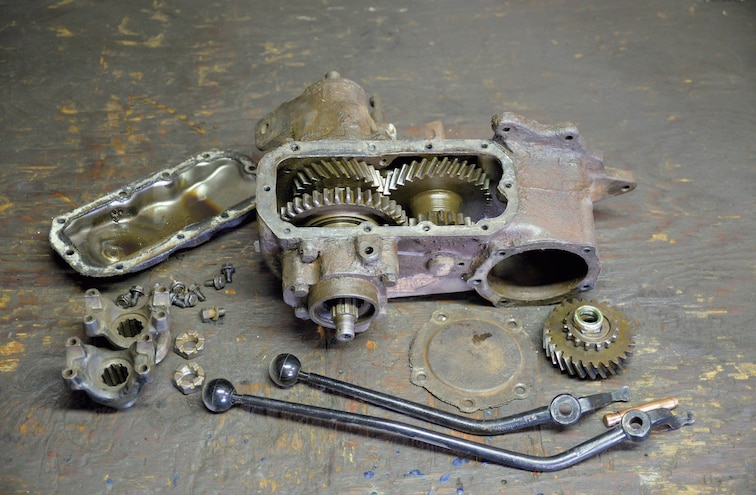 Our hypothetical pickup demonstrates one of the simplest platforms in four-wheel-drive technology. All kinds of systems and add-ons have been on the market for quite some time, utilizing electronic control with the use of motors and actuators, vacuum diaphragms, and hydraulic applications. You don’t have to get out of your truck to manually lock or unlock front hubs or grab a shifter to engage the transfer case, and you can fully lock a differential with the push of a button if applicable.
Most true four-wheel-drive trucks still use a solid rear drive axle, but many utilize an independent front suspension. Instead of a solid axlehousing, the differential is mounted to the frame, with external constant-velocity axles driving the wheels.
The complex electronics, automated suspension and driveline controls, traction, anti-lock, and stability systems make it pretty easy on a driver. Just press the button indicating your current terrain, and let technology dial-in the optimal adjustments.
The utilization of torque vectoring is on the forefront of all-wheel technology. Electric vehicles with a drive motor at each wheel may be the simplest and most accurate means available, and these types of hybrid/electric vehicles could potentially become commonplace in the future.