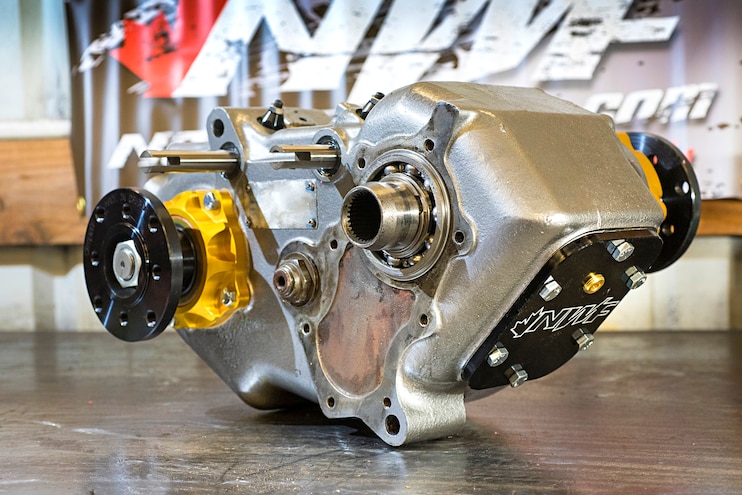 Put enough torque on any four-wheel-drive drivetrain component and it’ll break. Just ask competitors who run King of the Hammers, Ultra 4, Mountain Havoc or our own Diesel Power Challenge. The part that takes the brunt of the torque loads is the transfer case; any internal weakness is instantly spotlighted by resounding catastrophic failure when massive amounts of torque meet massive amounts of traction.
That’s why the decades-old, gear-driven New Process 205 t-case, used under the Big Three’s full-size trucks from the late ‘60s through the early ‘90s, has found so much favor among the competition crowd when it comes to building custom rigs with massive power. The venerable t-case is as stout as they come.
As robust as the NP205 is, there’s a weakness: the output shafts. Under extreme loads the rear output shaft is prone to snapping clean at the yoke spline, or ripping apart at the oiling ports behind the output shaft gear. The front output shaft has similar issues when huge amounts of torque are generated under severe conditions.
The weakest of these t-cases are the early NP205s found under GM trucks, which came with 10-spline output shafts. Later GM versions were updated to the stronger 30-spline output shafts. Ford’s heavy-duty NP205 was fitted with even stronger 32-spline shafts, which many swap into the GM t-cases to make them stronger.
The good news is there’s a big-boy upgrade: Ditching the factory output shafts and replacing them with the monster 34-spline versions offered by Northwest Fabworks LTD (www.northwestfab.com). This NP205 retrofit makes the t-case capable of “handling 1,000hp and 54-inch tires” boasts Kris Kusznieryk, the president of NWF.
They look like they would stand the test, too. The NWF replacements are 1 ¾-inch, CNC-machined, 8620-billet steel output shafts, which are 63-percent larger than the factory shafts as measured between the splines and bearing surface where OEM failures occur. Comparing NWF’s output shafts to the OEM is like comparing baseball bats to billyclubs.
Montpas Off-Road and Fabrication’s owner, Steven Montpas, needed an NP205 that could withstand massive torque loads for a special 4x4 project he’s working on at his Sutherlin, Oregon shop. He’d sourced a junkyard ’72 Chevy 10-spline t-case for all of $150, gutted it, and cleaned up the re-useable parts.
To make it “bullet-proof,” he went all-out and turned to NWF for a “Titan Series NP205 Transfer Case Upgrade Kit”: Titan output shafts; twin-stick rails; Rockwell 34-spline flanges; SLE kit; seals, bearings and CNC-‘d billet aluminum covers.
We caught up to Steven just as he was getting ready to pack the old NP205 full of NWF’s good stuff. He’d already had the case machined to accept the Titan output shafts’ larger bearings and seals, and painted the case and billet pieces. We’ll show you the highlights of the rebuild here, plus some tips we learned that make “super-sizing” the NP205 to stand up to copious amounts of diesel power a walk in the park.