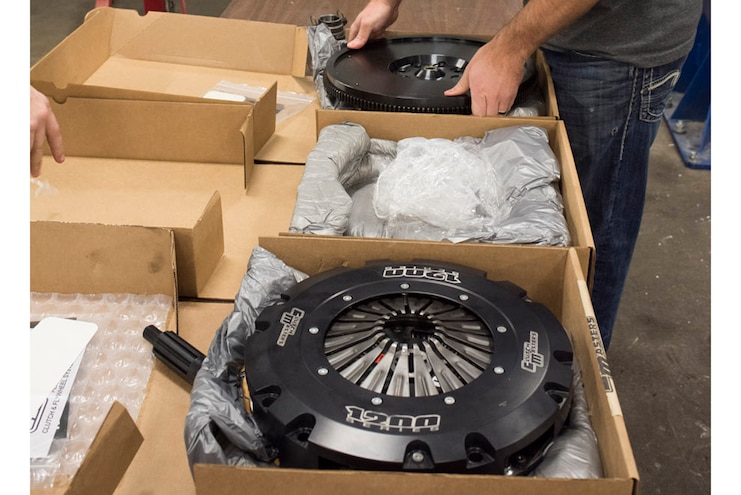 There is an ongoing debate among truck enthusiasts about which transmission—automatic or manual—is better for a diesel pickup. The advantages and disadvantages of both can be debated for hours with no real resolve. No matter what your opinion is, the choice ultimately comes down to a person’s preference, based on want, need, or a combination of the two.
Both transmissions have nuances, which, of course, include components that eventually wear out. For manual transmissions, the clutch assembly becomes worn out by use (driving style), time, and mileage, and it eventually has to be replaced. Parts fatigue because the clutch connects the engine to the transmission. It is operated by a pressure plate that applies force to a disc or discs that push against a flywheel, connecting the engine and transmission.
Every time the clutch pedal is depressed to shift gears, the pressure plate releases the discs, and the connection is severed. Then, when the pedal is released, the pressure plate reengages the discs to the flywheel. The reconnection of the discs and pressure plate (which are normally spinning at slightly different rates) causes wear, and any slippage that occurs during this union increases wear. Depending on a person’s driving style, a clutch can provide years and thousands of miles of faithful service. Such variables as big horsepower, oversized tires, heavy trailers, and/or a driver who likes to hot-rod around can make a clutch’s service time frame much shorter. 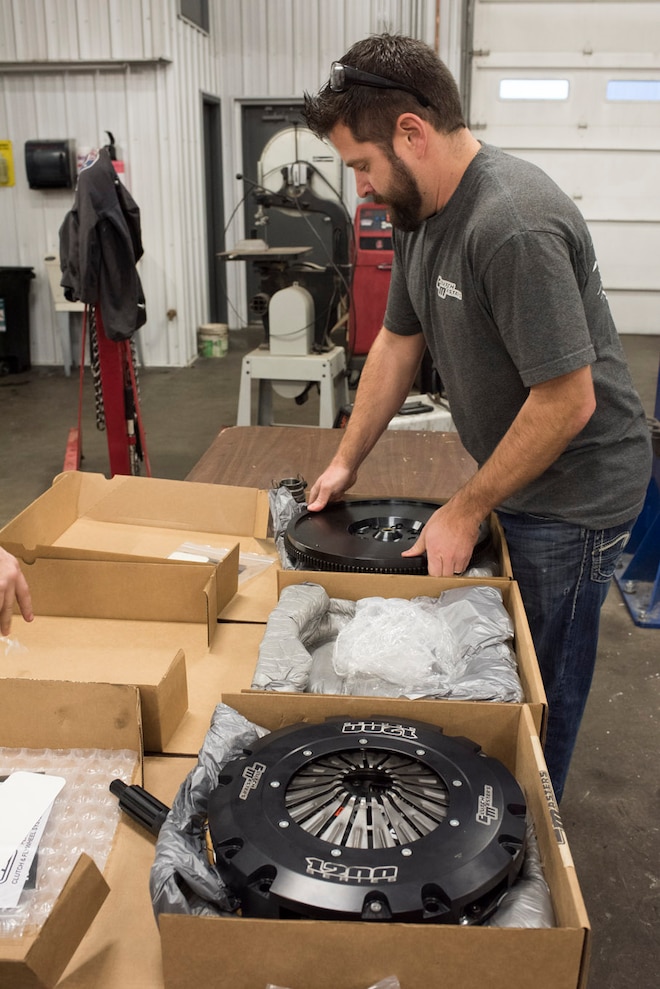 View Photo Gallery | 20 Photos
Photo 2/20   |   Travis Booher from Clutch Masters unboxes the Race version the company’s FX1200 twin-disc clutch.
When the time comes to replace the clutch in a diesel truck, an owner may consider upgrading to a stouter unit that has more clamping force and better disc material. This especially holds true for those who work their truck’s clutch really hard on a regular basis, doing things like towing or drag racing. Companies like Clutch Masters engineer clutches to meet the needs of those consumers and their vehicles.
Clutch Masters’ offerings include fitments for a broad range of diesel pickups. The company’s CNC-machined covers and flywheels are made in-house to ensure qualities such as balancing and stock height specifications are spot on (for ease of fitment). In early 2018, Clutch Masters released a new performance clutch, the FX1200 Twin Disc, which is designed to handle the big horsepower and torque demands of modern diesel rigs.
The FX1200 is offered in two versions (for ’94-to-’16 Dodge and Ram trucks powered by Cummins engines): Race and Street. Both units use a strapped midplate to reduce rattle along with one rigid and one sprung disc for smoother engagement. The “Race” (TD12R) clutch uses six-puck ceramic discs to provide maximum holding capacity, while the “Street” (TD12S) piece is comprised of organic material. The pressure plate provides 3,200 pounds of clamping force and, when paired with the ceramic discs, is able to withstand up to 2,000 lb-ft of engine torque and the rigors of excessive towing weights. 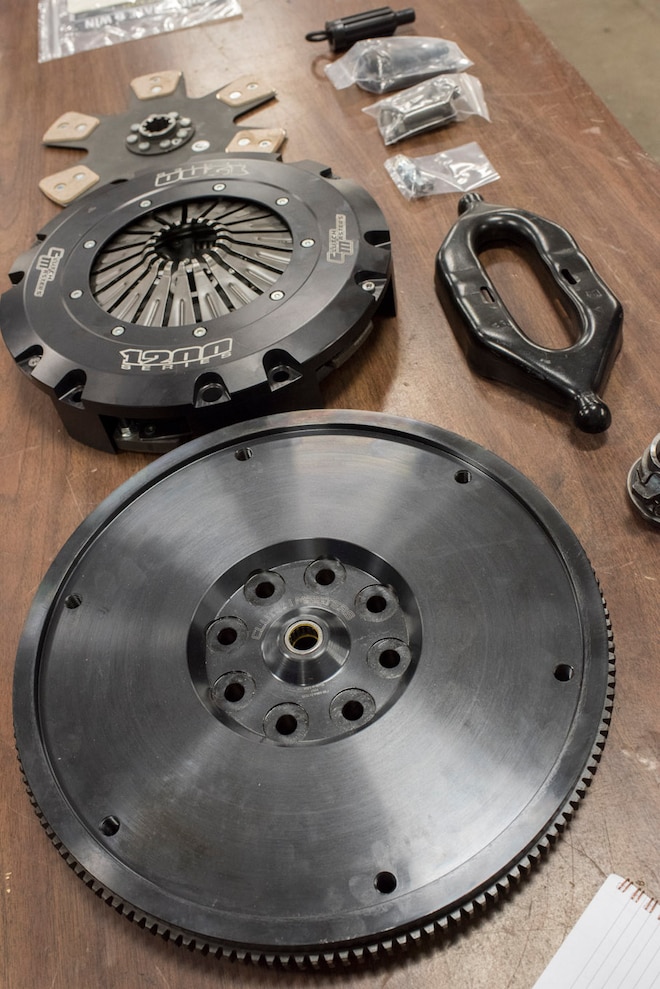 View Photo Gallery | 20 Photos
Photo 3/20   |   The FX1200’s pressure-plate cover and flywheel are CNC-machined in-house at Clutch Masters. Keeping everything proprietary helps guarantee stock-like fitment, exact balancing, and quality control. Ceramic six-puck discs (one rigid and one sprung) are used in the race clutch, with 3,200 pounds of pressure-plate clamping force to ensure a strong connection is made. All the hardware, bearings, and components needed for installation are provided in the kit.
The FX1200’s aluminum cover assembly with pressure plate, two discs, pressure-plate ring, midplate, and billet-steel flywheel (an aluminum version is available for some applications for greater weight savings) is 10 percent lighter than equivalent OEM components. The reduction in weight helps prevent excessive chatter and gear rattle, while also reducing turbocharger lag by allowing the engine to rev more freely. A release bearing, clutch fork (with pivot ball and clip), pilot bearing, and pressure-plate bolts are included with each system.
We had the opportunity to check out a Clutch Masters FX1200 Twin Disc Race clutch assembly being installed in an ’05 Dodge Ram 3500, at Gomer’s US Diesel Parts in Missoula, Montana. The Race version was selected to support the truck’s heavily modified 5.9L Cummins engine’s (100hp injectors, 33-percent-over Industrial Injection CP3 injection pump and Thunder 330 turbocharger, FASS Fuel Systems Titanium 150-gph lift pump, and a Mads Smarty programmer) increased power levels and the work normally demanded of it. 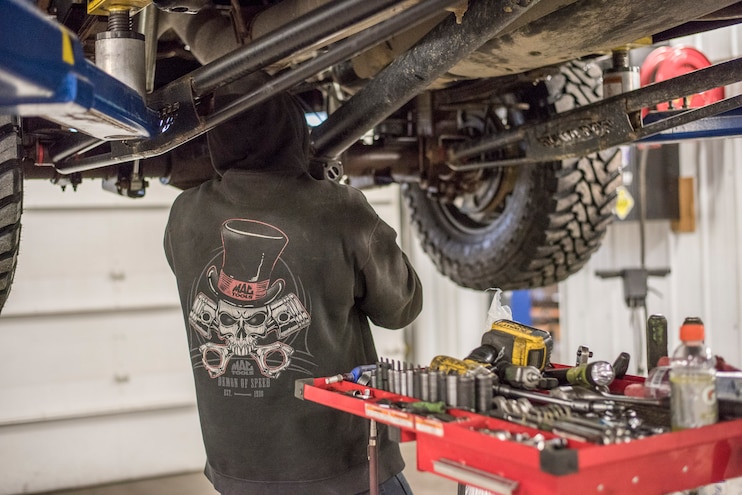 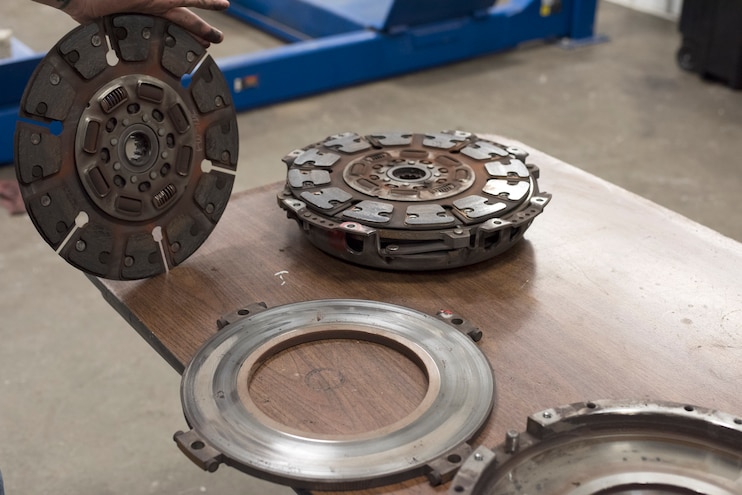 View Photo Gallery | 20 Photos
Photo 9/20   |   A look at the clutch assembly after removal shows it has been worked hard by the Dodge Ram. 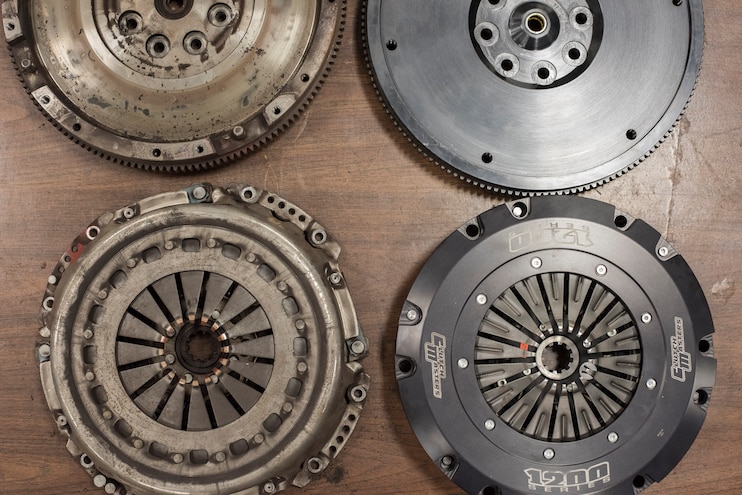 View Photo Gallery | 20 Photos
Photo 10/20   |   A side-by-side comparison of the old clutch and the FX1200 shows a distinct difference between the pressure plates and flywheels. 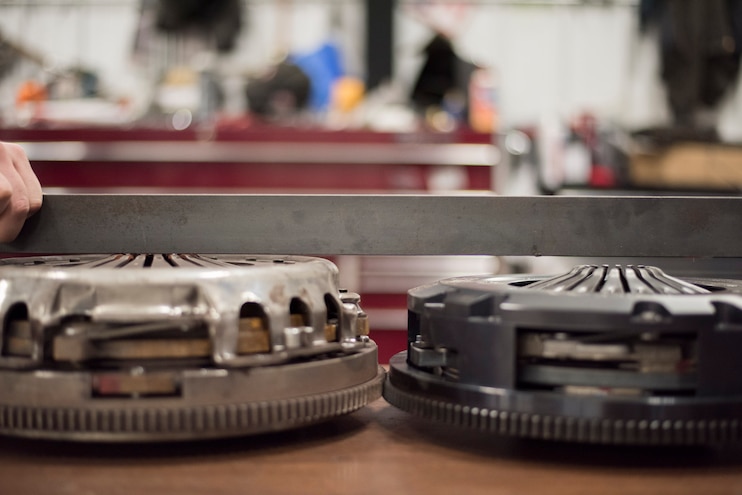 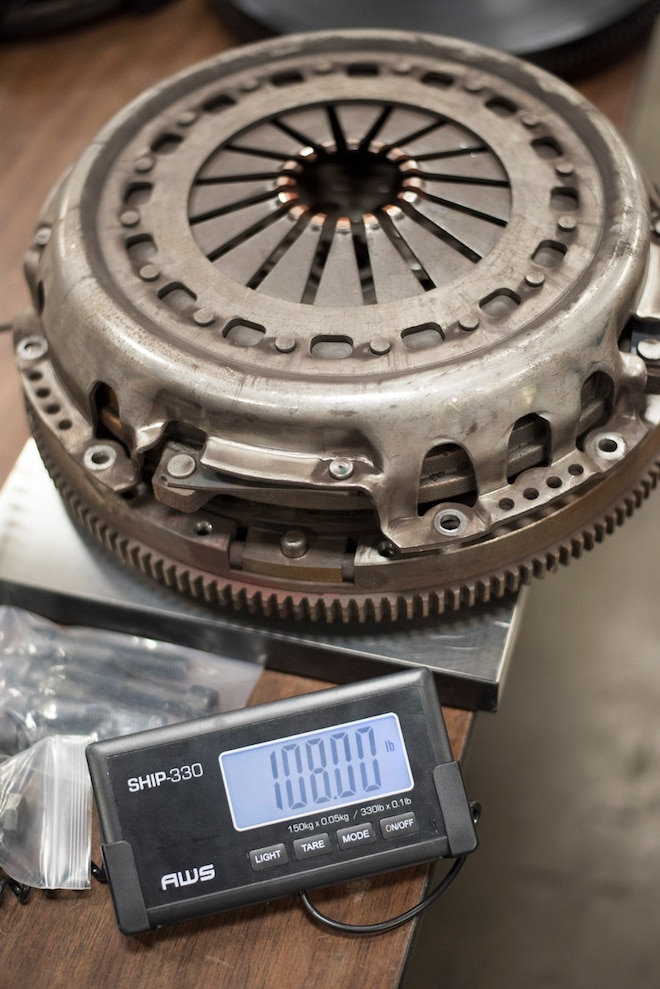 View Photo Gallery | 20 Photos
Photo 12/20   |   The precisely CNC-machined cover and flywheel of the new clutch are an average of 10 percent lighter than their stock counterparts. With our two clutches on the scale, we see the FX1200 is 5 pounds lighter than the unit it is replacing. 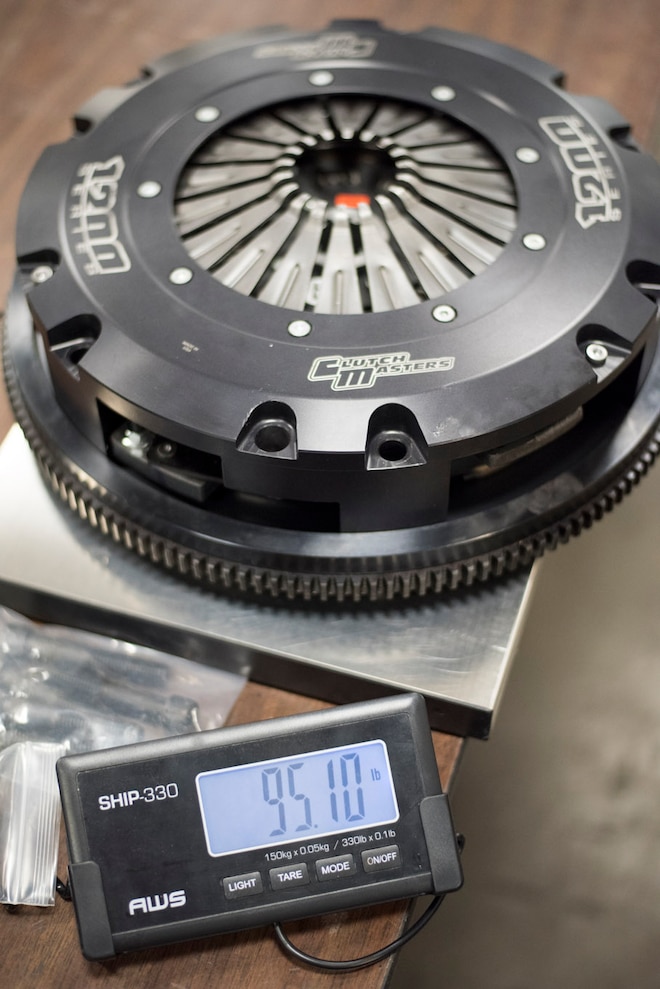 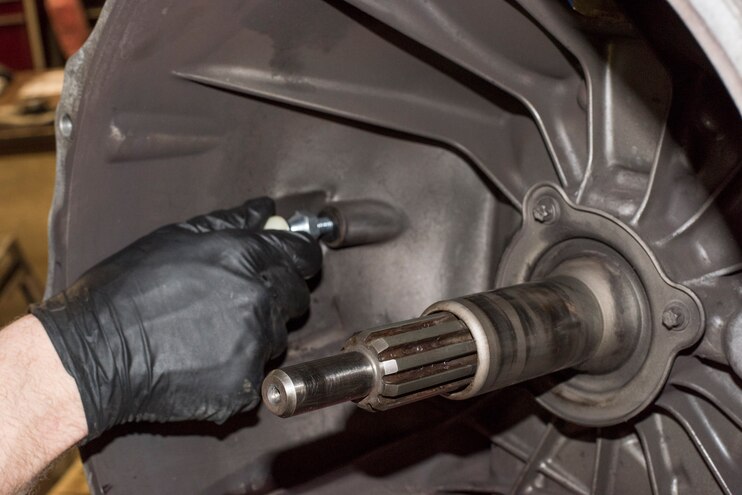 View Photo Gallery | 20 Photos
Photo 14/20   |   Kodi swaps the clutch-fork pivot ball in the bellhousing with a new one that is included with the FX1200. 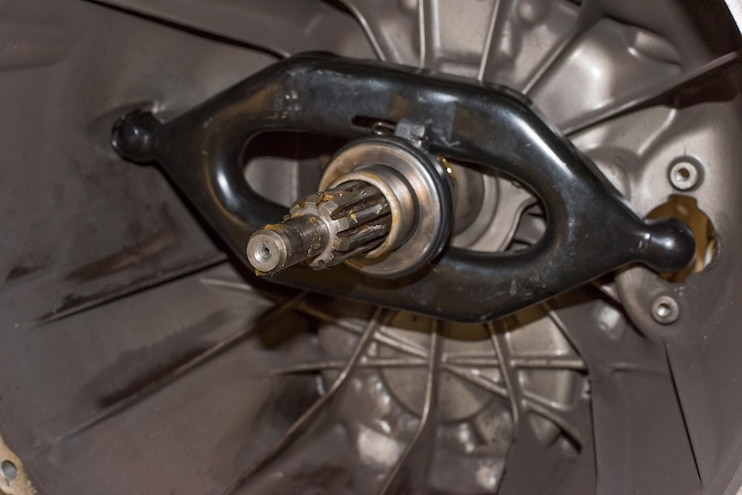 View Photo Gallery | 20 Photos
Photo 15/20   |   The release bearing is attached to the clutch fork with the included clips and then installed on the transmission so the bearing can slide on the input shaft. One end of the fork attaches to the pivot ball, while the clutch-pedal slave cylinder actuates the other end. 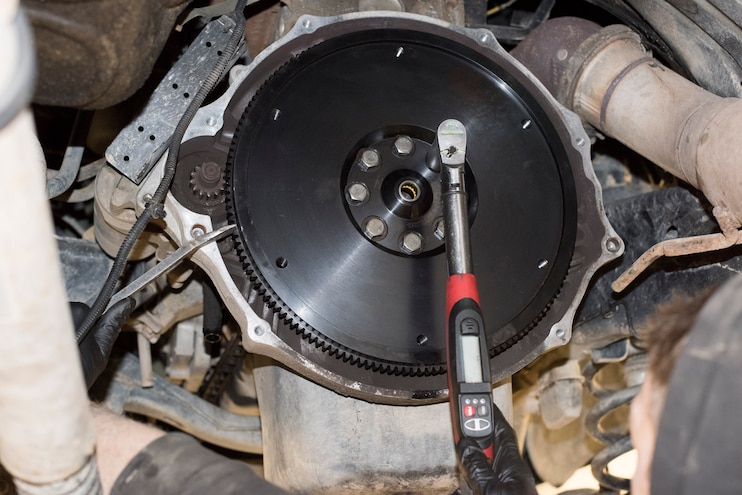 View Photo Gallery | 20 Photos
Photo 16/20   |   The flywheel is installed, and the bolts are torqued to specifications. 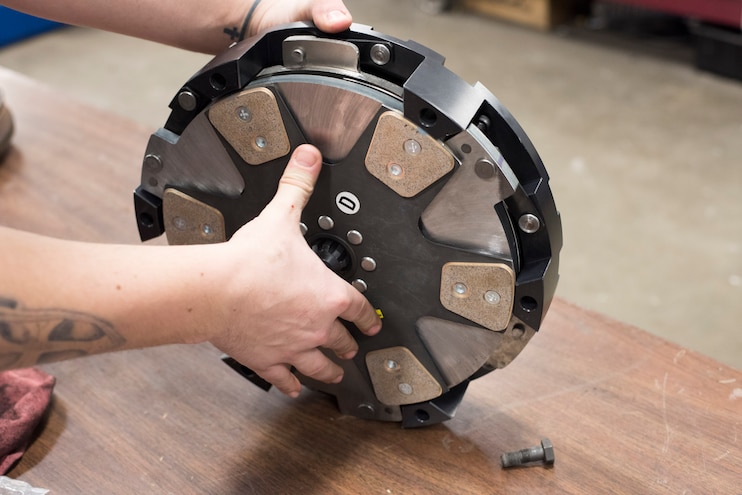 View Photo Gallery | 20 Photos
Photo 17/20   |   The two ceramic discs, midplate, and pressure plate are assembled on a workbench before being installed in the truck. 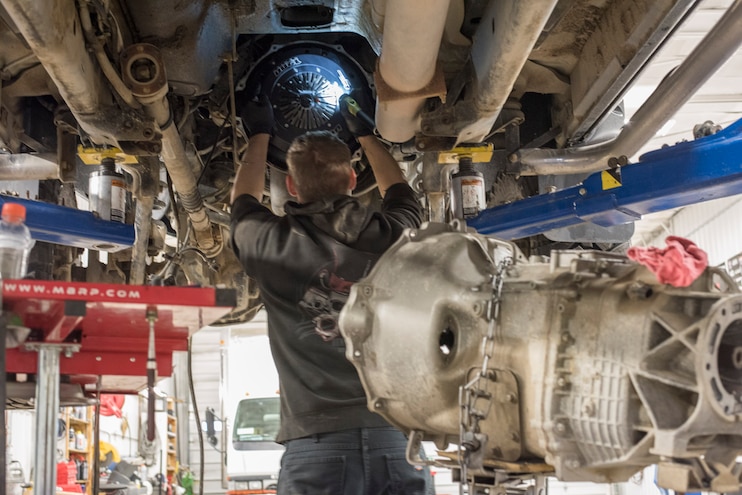 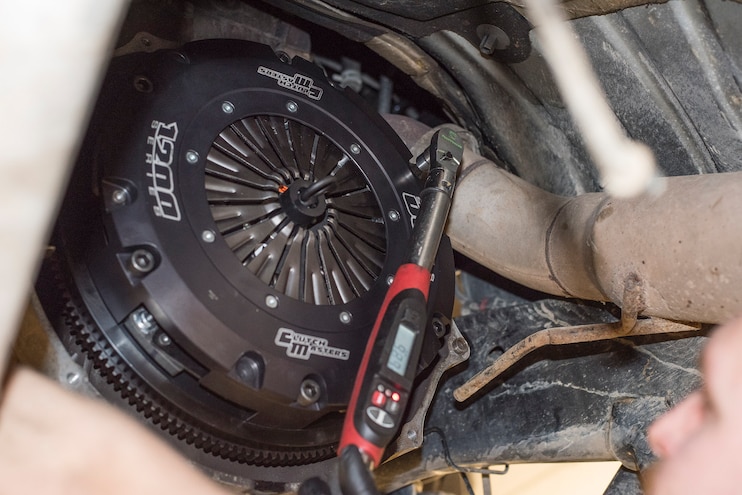 View Photo Gallery | 20 Photos
Photo 19/20   |   A clutch-alignment tool is used to ensure the discs are properly aligned. Then the pressure plate bolts are secured with the correct torque value. 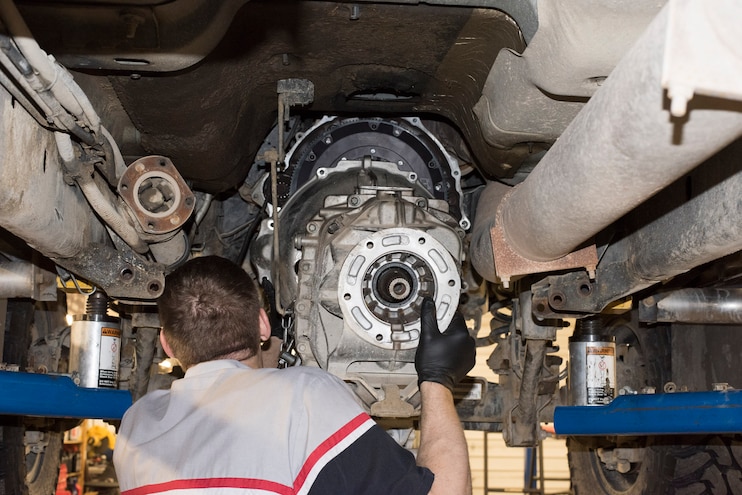