How To Quiet A Noisy Ram HD Twin-Disc Clutch 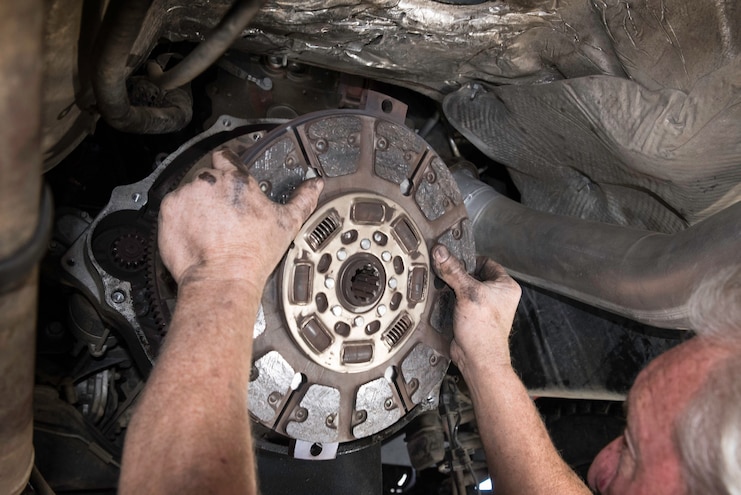 Even before the customer shut off the engine and walked into Mobile Diesel Service’s office, the technicians in the southern Oregon shop knew what the issue was with his ’13 Ram 3500. The noise and distinctive rattle when the clutch was disengaged could be heard above the sound of air guns and shop compressors. The truck’s twin-disc clutch was in dire need of some TLC. By the sound of it, the most likely cause of the cacophony could be attributed to the anti-rattle snubbers being shot and no longer doing their job.
A year and a half earlier, the same rig had a slipping stock clutch. Mobile Diesel upgraded the 6.7L Cummins–powered pickup with a South Bend Clutch G56-OK-HD twin-disc to handle the additional power gained from an exhaust, ECM tuning, and other modifications, which most likely contributed to the stock clutch’s early demise.
According to the owner, the rattling noise began several months earlier and had gotten progressively louder. Ruben Villalobos, an MDS technician who specializes in such matters, put the Ram on the rack and pulled the clutch. Sure enough, even before the clutch was disassembled, he could clearly see the hard plastic anti-rattle snubbers were missing from the center plate of the clutch. Hence, the primary cause of the obnoxious rattling when the clutch pedal is depressed. 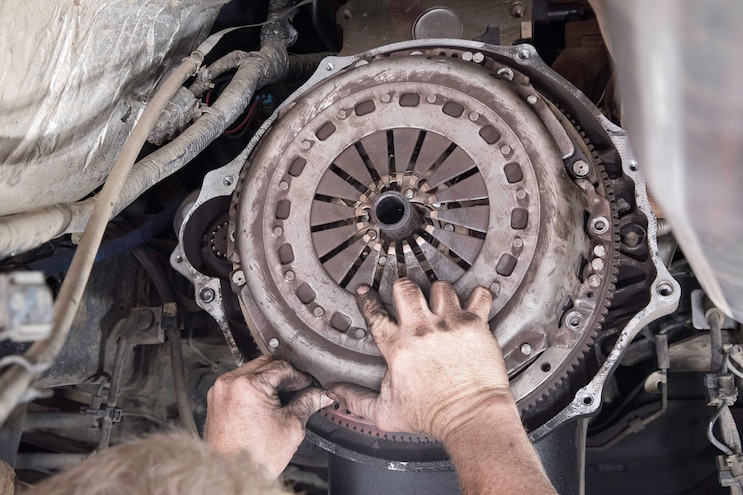 View Photo Gallery | 23 Photos
Photo 2/23   |   Ram Twin Disc Clutch
All twin-disc clutches make noise as a direct result of the center, or “floater” plate, which is the intermediate flywheel between the clutch discs, vibrating against the locating notches in the flywheel when the clutch pedal is depressed. There are numerous methods used by clutch manufacturers to damp the noise generated by the inherent movement of the floater plate. South Bend uses hard, button-like neoprene snubbers, one on each side of the four locating ears.
Why these snubbers fail is difficult to pinpoint. “A clutch is a wearable product, so it really comes down to how the truck is being used and how it’s driven,” says Manseil Washburn, the head of the South Bend Clutch diesel division. “Snubber failure in this instance could be attributed to the truck being hooked up to a trailer all the time. But it's more likely hard jolts to the drivetrain, such as when spinning tires suddenly get traction, that flatten out the snubbers prematurely.”
Manseil says the loss of the tiny internal noise dampers can also be caused by one or more of them not properly fitting in the holes in the ears of the center plate, causing them to loosen prematurely. They may have also gotten hot from slippage, which can happen when backing up a trailer. Excessive heat leads to the plastic snubbers falling out or disintegrating. Or it could be a combination of all of the above.
One thing that is almost certain when one fails is the others will soon follow. The missing piece causes the center plate’s vibration to increase, which places even more force on the remaining snubbers. The good news is they are easy to replace once the clutch is out. South Bend typically sends a packet of the “Neoprene Anti-Rattle Center Plate Snubbers” (PN MV11-1) to customers free of charge.
“We haven't made a change to those [snubbers] in a couple of years, but the newest versions have a little taper on the protrusion that fits into that center plate, so they're going to be stronger initially because they fit the hole better,” Manseil says.
As you see in the photos, Ruben replaces the snubbers and throw-out bearing (PN N070SA-HD), which also shows signs of wear. The rest of the clutch assembly still looks new—even after 70,000-plus miles. In the end, six hours of rack time and $60 worth of parts is all it takes to make a Ram’s obnoxiously loud clutch whisper quiet.

View Photo Gallery | 23 Photos
Photo 3/23   |   Pro tip: Before pulling the transmission, the electronic transfer case is shifted into four-wheel drive. This allows the front output yoke on the transfer case to be turned by hand, making it much easier to align the transmission input shaft with the clutch during reinstallation. 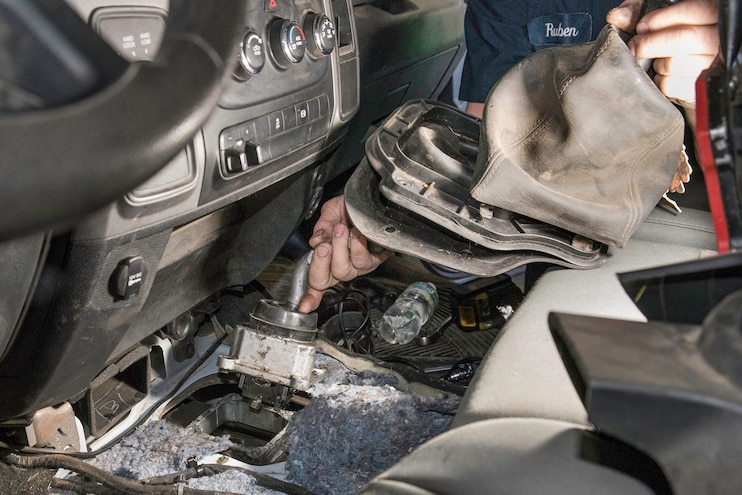 View Photo Gallery | 23 Photos
Photo 4/23   |   We remove the plastic trim and six 5/16-inch bolts that secure the shifter to the G56 six-speed manual transmission, so the gearbox can be taken out easily. Note: Shift the transmission to Neutral to ease reinstallation. 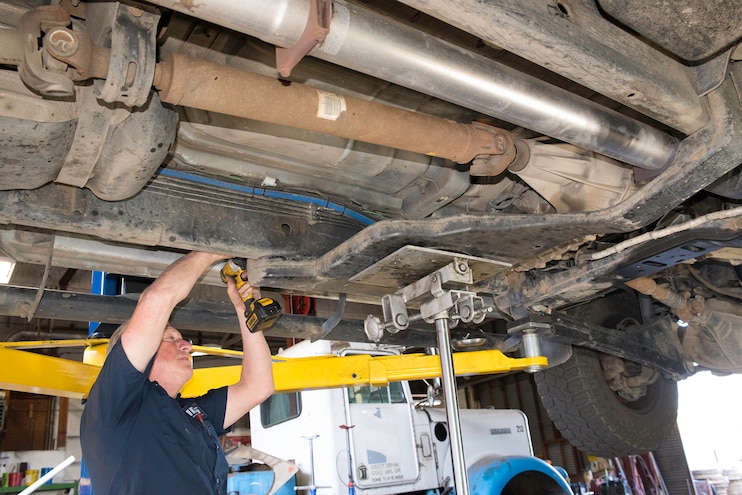 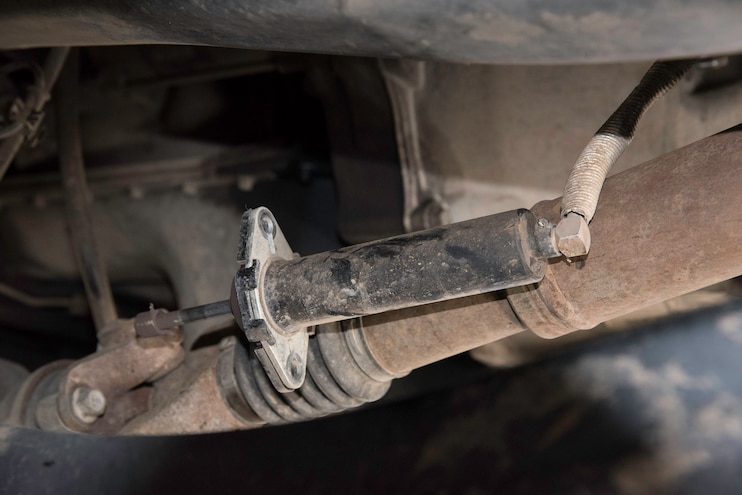 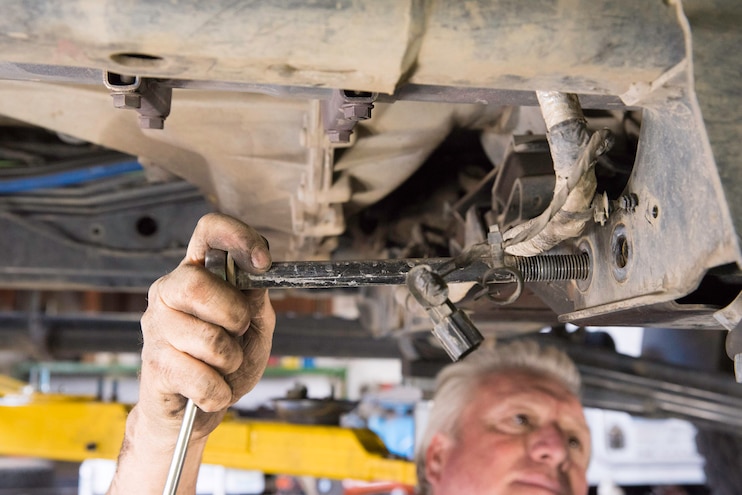 View Photo Gallery | 23 Photos
Photo 7/23   |   With the G56 six-speed manual transmission/transfer case assembly bolted to the jack, Ruben pulls out the four 15/16-inch bolts that hold the crossmember to the frame. Make sure you have a stout jack, because there’s about 450 pounds suspended above your head. View Photo Gallery | 23 Photos
Photo 8/23   |   Before we lower the transmission/transfer case/clutch assembly, Ruben unhooks the frame clips that hold the DEF wiring harness so he can slide it up and over the transfer case without actually having to disconnect all the wiring. View Photo Gallery | 23 Photos
Photo 9/23   |   Pro tip: Rent, borrow, or steal a 33-inch-long, ½-inch drive extension for your air-impact gun. The long extension really makes getting to the upper bolts that hold the bellhousing to the block a lot easier. 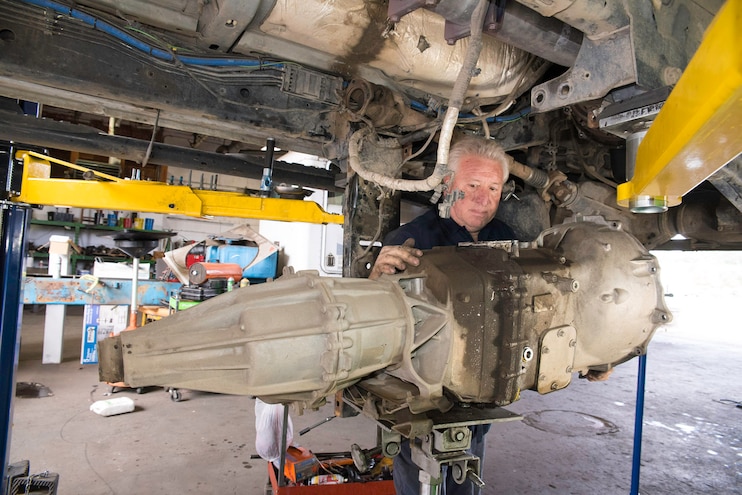 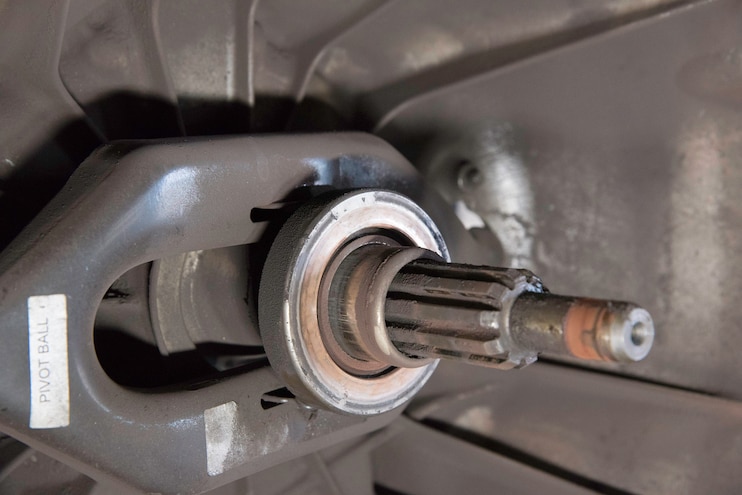 View Photo Gallery | 23 Photos
Photo 11/23   |   With the transmission down, inspecting the throw-out bearing is easy. This one is bad, so it is being replaced. Riding the clutch or sitting with the clutch pedal depressed for long periods of time will shorten any throw-out bearing’s life. 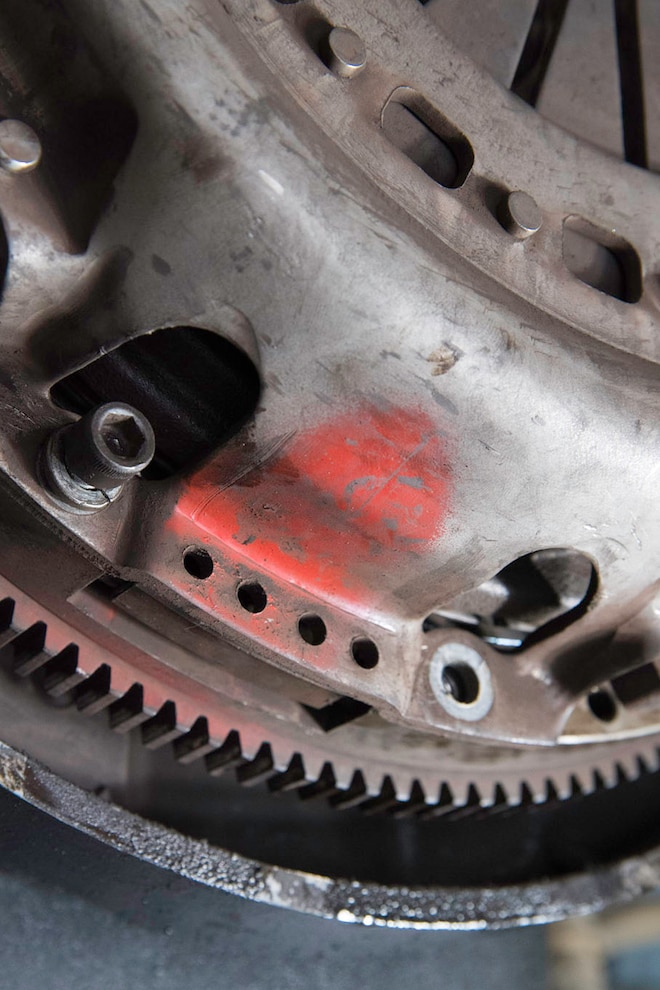 View Photo Gallery | 23 Photos
Photo 12/23   |   Before we remove the clutch assembly, Ruben shows us where the manufacturer marks the position (red paint) of the components after everything is balanced. It’s critical the clutch goes back together with the parts in the same location. 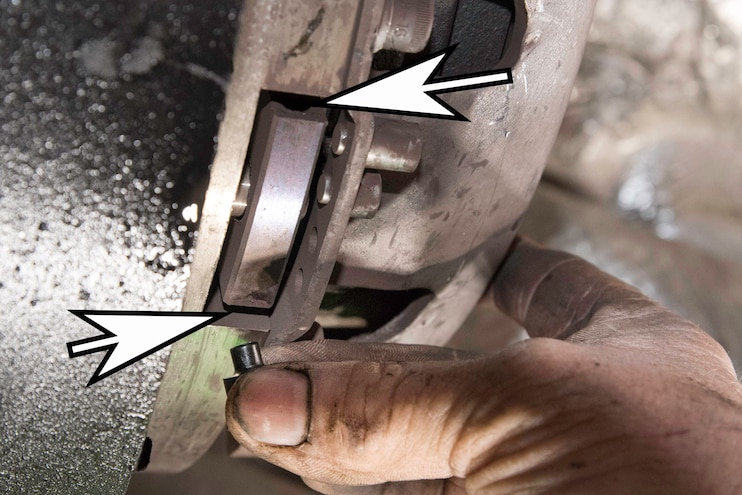 View Photo Gallery | 23 Photos
Photo 13/23   |   Here’s the cause of most of the clutch racket: missing anti-rattle snubbers on the twin-disc’s center plate, or “floater plate.” 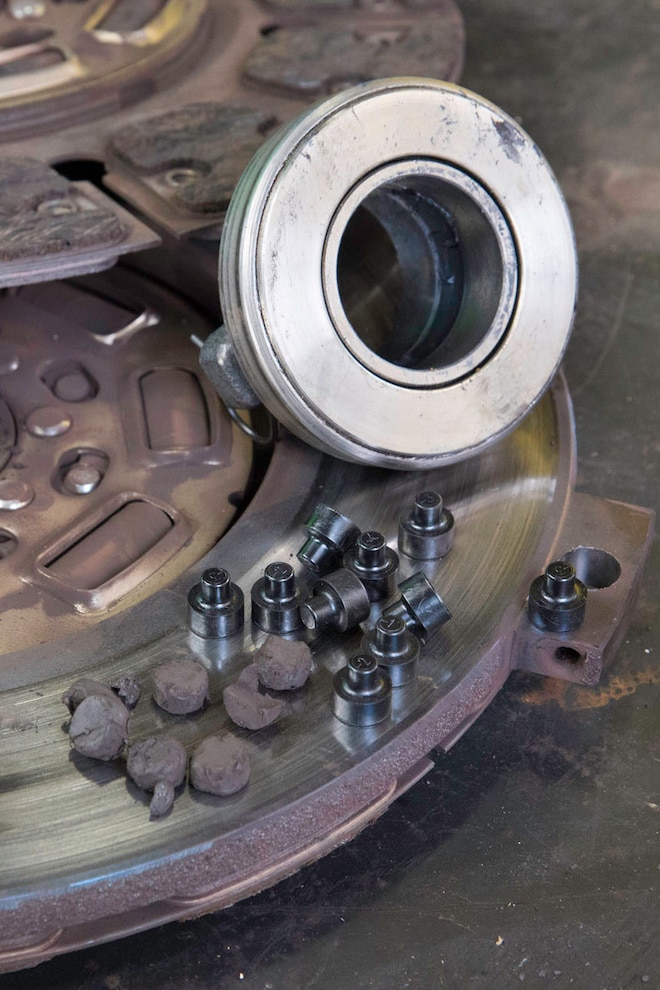 View Photo Gallery | 23 Photos
Photo 14/23   |   When we take the South Bend twin-disc clutch apart, the old snubbers fall out. All are in different stages of damage and deterioration. We install new snubbers from South Bend (PN MV11-1), along with a throw-out bearing. 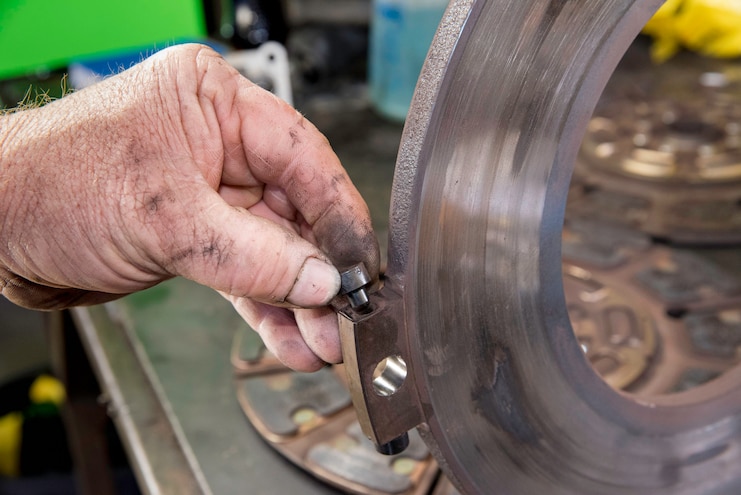 View Photo Gallery | 23 Photos
Photo 15/23   |   The hard Neoprene snubbers fit tightly into the holes that align the ears of the twin-disc’s center plate to damp the engagement/disengagement of the clutch discs. 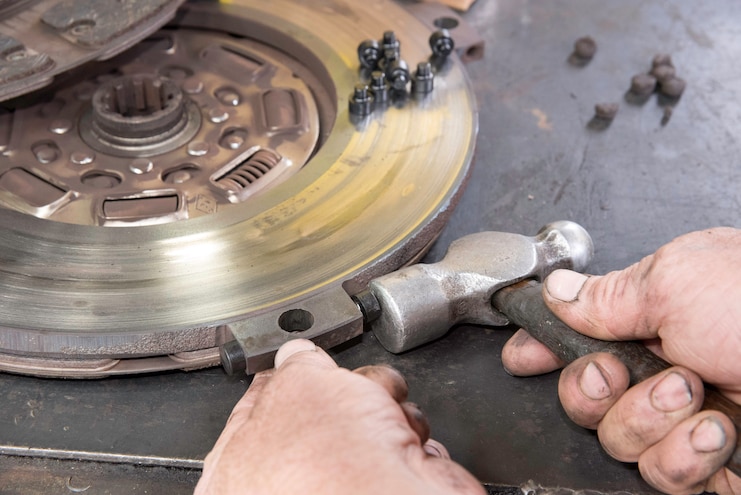 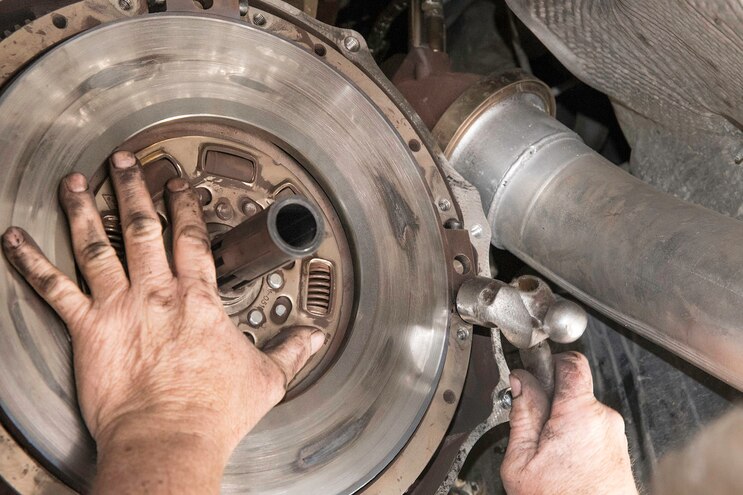 View Photo Gallery | 23 Photos
Photo 17/23   |   It’s a tight fit trying to get the center plate back into position with the new snubbers installed. It takes patience and a very light touch with a ball-peen hammer to get the ears to slide into place without damaging the Neoprene buttons. A second pair of hands can be a great help during this part of the process. 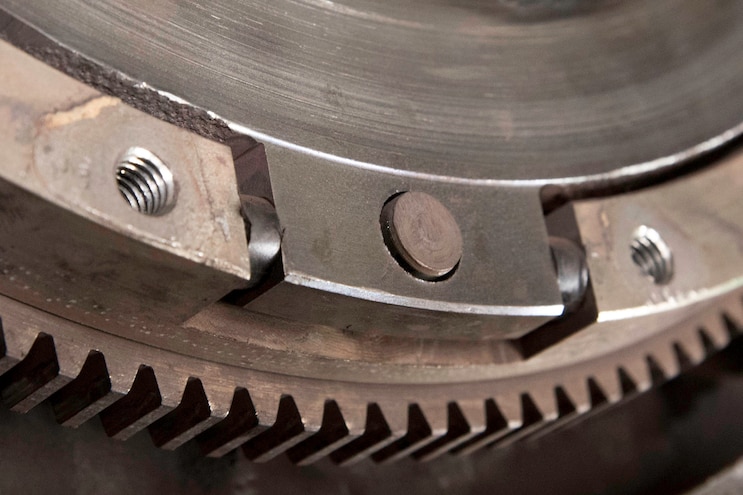 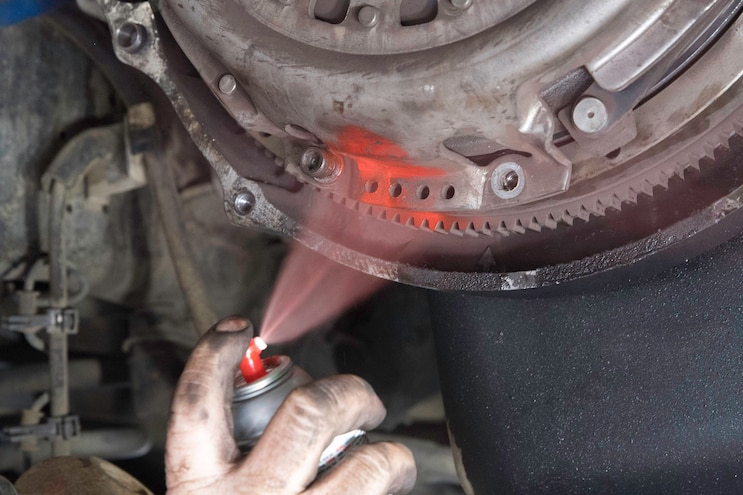 View Photo Gallery | 23 Photos
Photo 19/23   |   Ruben marks the clutch assembly with red paint. We reassembled the clutch so that all the parts are in their original location. Indexing in this manner ensures the clutch stays balanced. 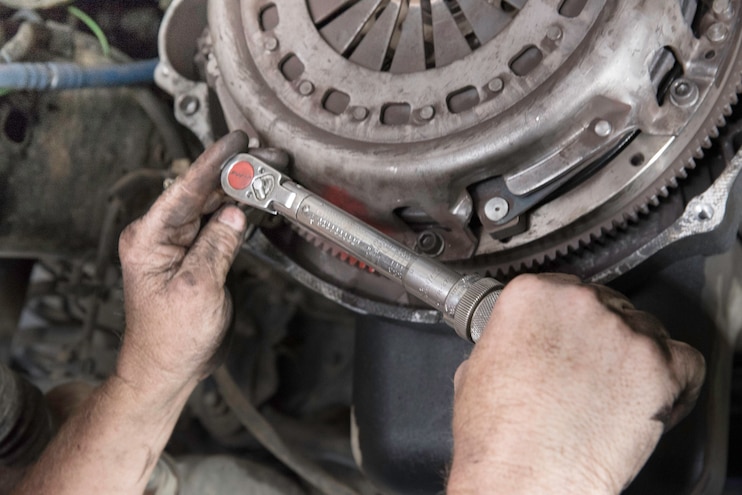 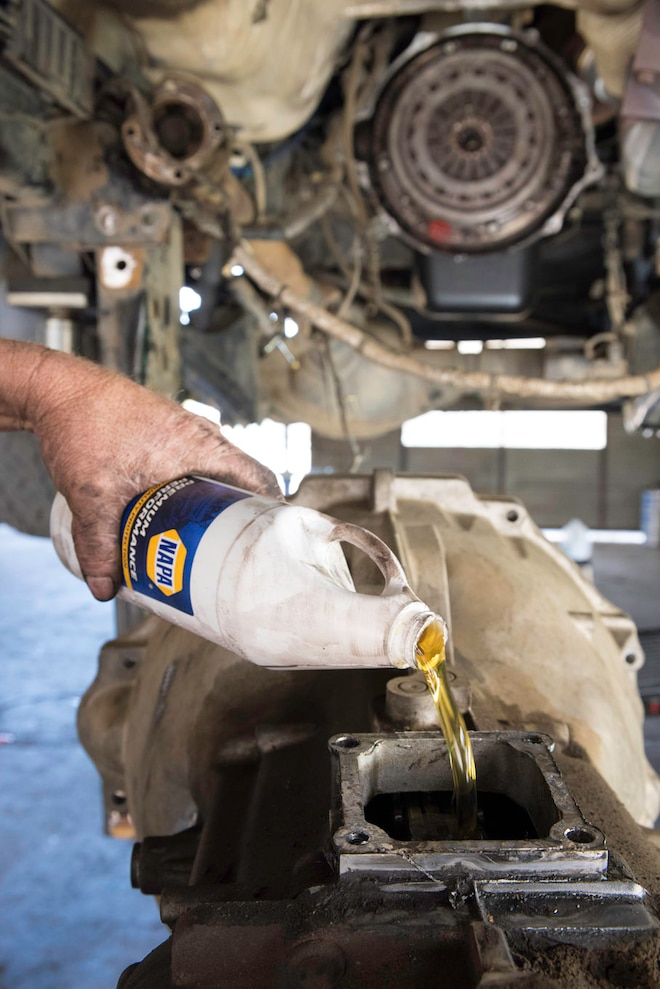 View Photo Gallery | 23 Photos
Photo 21/23   |   Here’s where South Bend and Ram differ in theory. Ram specifies the G56 be filled with 4.95 quarts (9.9 pints) of ATF+4. South Bend suggests refilling the six-speed manual with 6 quarts of a full-synthetic SAE 50 engine oil. Manseil says the company does that to: 1) help reduce harmonics created by the engine and twin-disc-clutch, as they are transferred through the transmission and into the cab; and 2) because the higher-viscosity engine oil makes the G56 shift smoother (by reducing gear speed). (Note: Ram will not warranty a transmission that isn’t filled according to its factory specifications.) 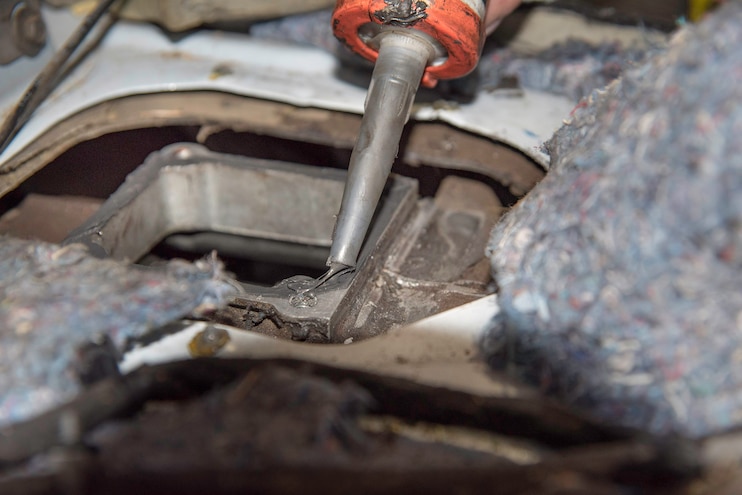 View Photo Gallery | 23 Photos
Photo 22/23   |   Ruben cleans the shift tower mounting face and then lays on a thin line of RTV sealant to ensure there are no fluid leaks when the shifter is back in place. 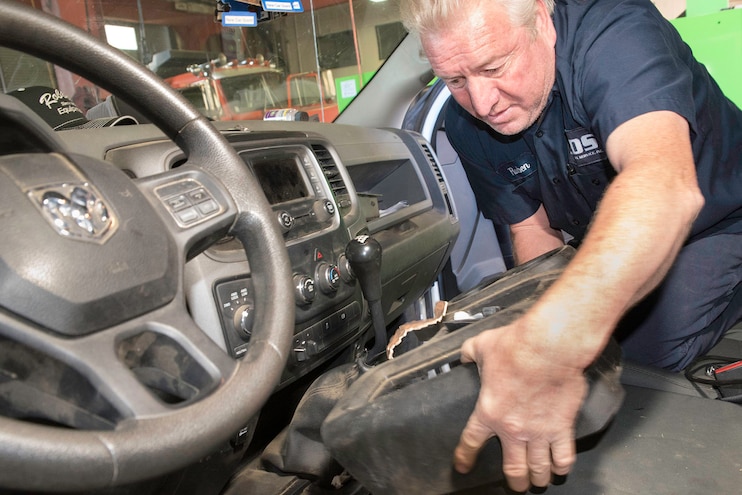 View Photo Gallery | 23 Photos
Photo 23/23   |   Repairs are finished by replacing all the plastic trim around the shifter and taking the truck for a testdrive. The difference is startling, as the repaired clutch is now whisper quiet—just like it came from the factory—and the shifts are velvet smooth.