How to Service a GM Automatic Transmission

Giving our 700R4 some attention with the help of Duralast & Lucas. 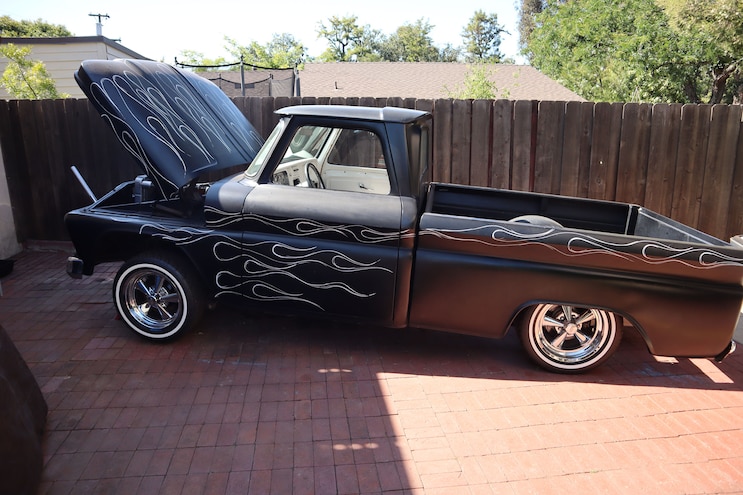 We're roundin' third on our maintenance kick on Truckin magazine's longest-running truck project. What started as simply knocking the dust off our '64 "GMC" to hit some cruises during the great quarantine of 2020 has turned into a pretty fun adventure, and after today the truck will officially be back on the road!

On the outside, we started off by ditching the factory GMC logo and adding in a custom tube grille insert from Glory Grilles. Then we serviced the SBBC brakes and bolted up a set of 17-inch Cragar S/S wheels and Diamondback Classic skinny whitewalls to give the whole truck a whole lot more '60s attitude. On the first cruise, we immediately realized that our long-neglected truck had some issues. It ran rough and a little hot, which made it hard to restart, and it even slipped out of overdrive and back into third gear a couple times. For the former, we replaced almost all of the ignition components and fine-tuned the engine for the first time in 20 years. Then we replaced the thermostat, the thermostat housing, hoses, clamps, and coolant to get rid of a leak and hopefully help the engine run a few degrees cooler. Finally, we needed to address the 700R4 that we installed almost 15 years ago.

View Photo Gallery | 19 Photos
Photo 2/19   |   We were itching to get our '64 back on the road with its new tune-up, but we had one more thing to do. The 700R4 automatic transmission we installed about 15 years ago had never been serviced—not even after break-in. It's not quite as bad as it sounds; we've probably only put 15,000 miles on it since then.

We see a lot of people that do some of their own maintenance on their truck but have no interest in learning about their GM automatic transmission. The truth is, while doing a full rebuild is definitely best left to the professionals, doing a basic service, or even adding a shift kit, is something that just about anyone can tackle. The fluid plays such an important role in the function of an automatic transmission that simply changing the filter and fluid can make a big difference in the tranny's performance and extend its life exponentially if done on a regular basis.

To show how easy it is to service a 700R4 (the part numbers are different, but the process is the same for almost all older GM automatics), we jumped in a did just that on our '64 in just a couple hours in our driveway—the same place where all the work has been performed on this truck lately. We ordered up a Duralast filter and gasket kit, and we dug deep in the garage for a six-pack of Lucas semi-synthetic fluid to refill the transmission to appropriate levels. It's important to remember that all of the fluid does not drain when you remove the pan—it is actually only about half. But if you're having issues, it gives you a chance to inspect the pan for metal or clutch material, remove it, and replace the filter that is full of it.

In our case, the magnet only showed a minimal amount of clutch and no metal. Not bad since we never serviced the transmission after break-in. Check out the process below and check back because we have some other ideas for this truck that you won't want to miss! 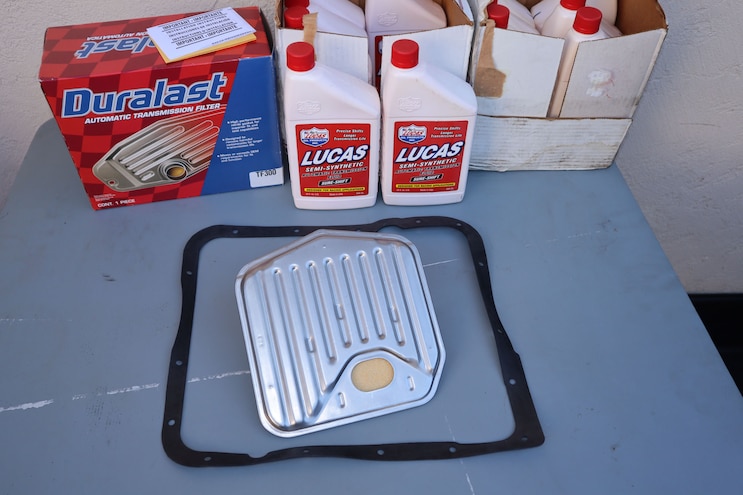 View Photo Gallery | 19 Photos
Photo 3/19   |   We picked up a Duralast service kit from AutoZone and went digging in the garage for our supply of Lucas semi-synthetic transmission fluid. We knew there was some in there somewhere! 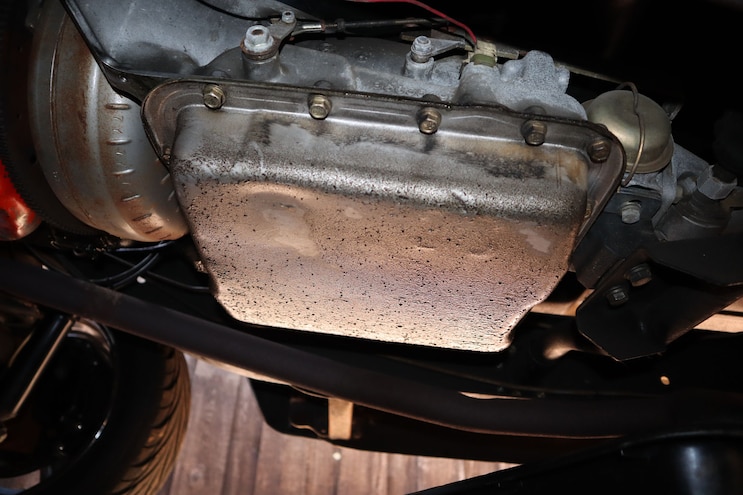 View Photo Gallery | 19 Photos
Photo 4/19   |   On our last cruise, the transmission dropped down into third gear a couple times, so we knew this was a necessary action. With the C10 in the air and on jack stands we were ready to go to work. 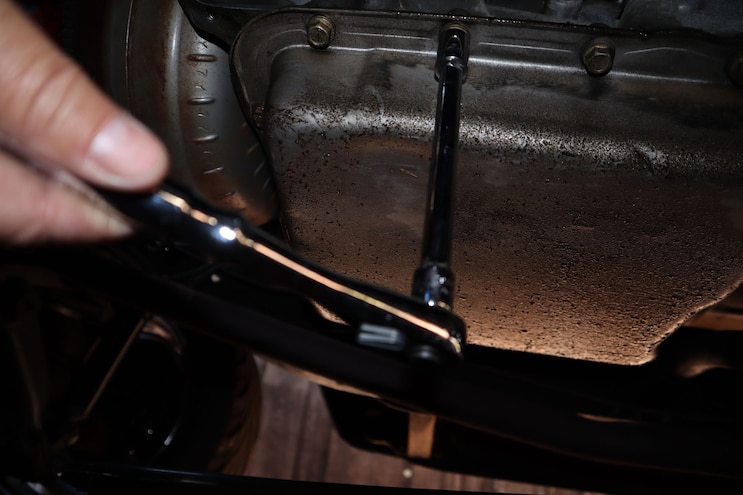 View Photo Gallery | 19 Photos
Photo 5/19   |   We began by removing the rearmost bolts first, then worked our way to the front. A large drain pan was ready and waiting. View Photo Gallery | 19 Photos
Photo 6/19   |   That way, when you begin to loosen the bolts across the front rail, you can control the stream of fluid coming out of the back of the pan and not make a giant mess. 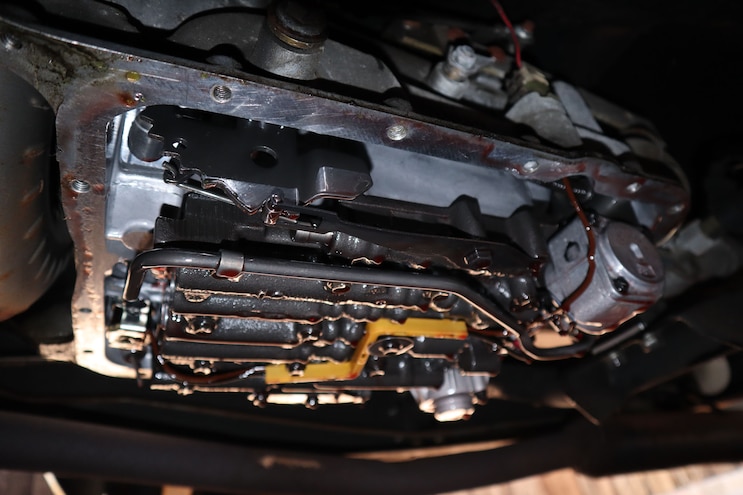 View Photo Gallery | 19 Photos
Photo 7/19   |   Eventually, we dropped the pan completely, and the gasket came off with it. (Sometimes they come off in several pieces and the mounting surface requires lots of scraping and cleaning.) Then we removed the filter. What you see now is the valve body. That's what you remove and modify when installing a shift kit, but that's a lesson for another day. Besides, ours already has one! 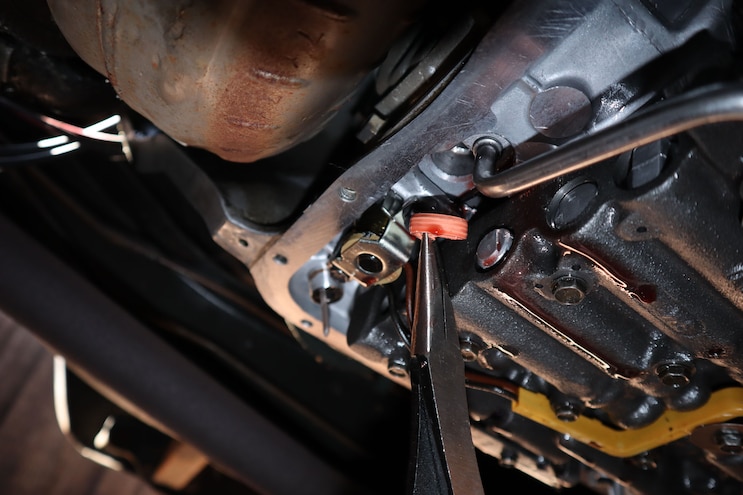 View Photo Gallery | 19 Photos
Photo 8/19   |   This is where a lot of problems occur when doing a service. The seal for the filter that plugs into the case likes to harden and get stuck there. If you try to shove another one on top of it, the filter won't seat and may not even fit under the pan. A pick and needle-nose pliers solved the problem. 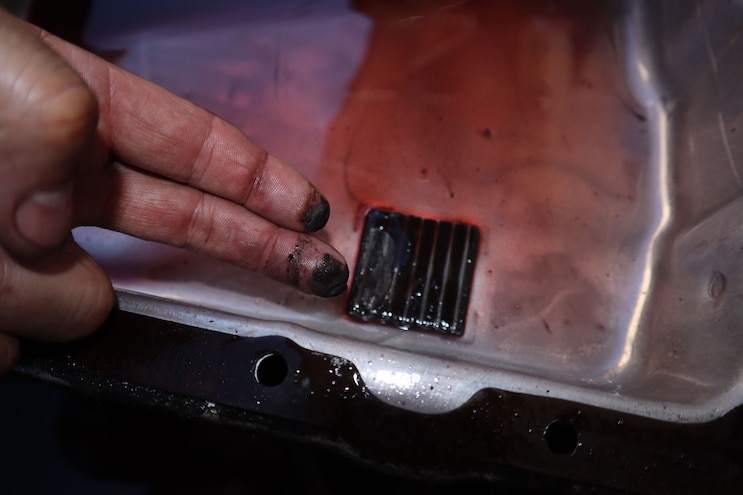 View Photo Gallery | 19 Photos
Photo 9/19   |   There is a magnet in most pans, and its purpose is to catch any metal dust or shavings before it recirculates. Ours had a little sludge on it, but since this is the first service since it was broken in, what we saw was pretty minimal. 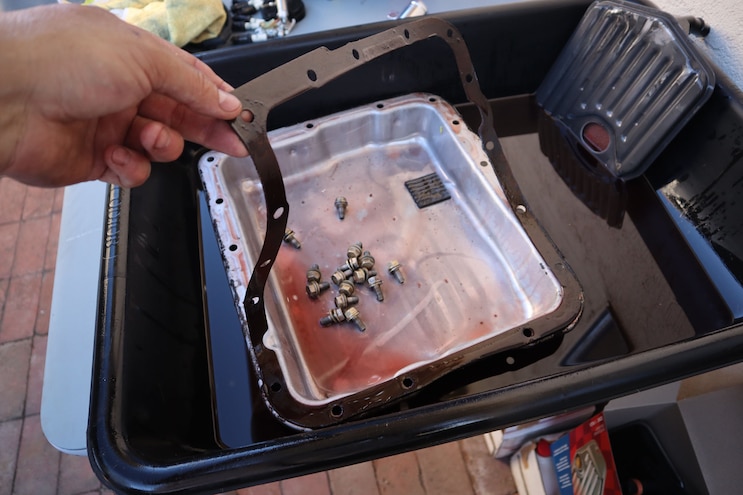 View Photo Gallery | 19 Photos
Photo 10/19   |   At this point, the pan gasket and drained filter went in the trash, the fluid was recycled, and the pan and bolts went to the sink. Also, we realized that less than four quarts of fluid were drained. It should be closer to six. Now we know our fancy dipstick is reading wrong, and why the truck was dropping out of overdrive so easily. 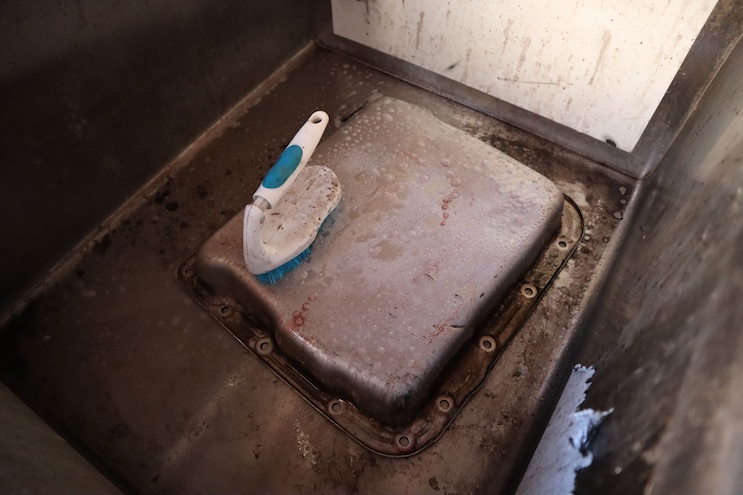 View Photo Gallery | 19 Photos
Photo 11/19   |   Usually we use solvents and carb cleaner to get the pan cleaned up. But today we used water-based degreaser in the garage sink. 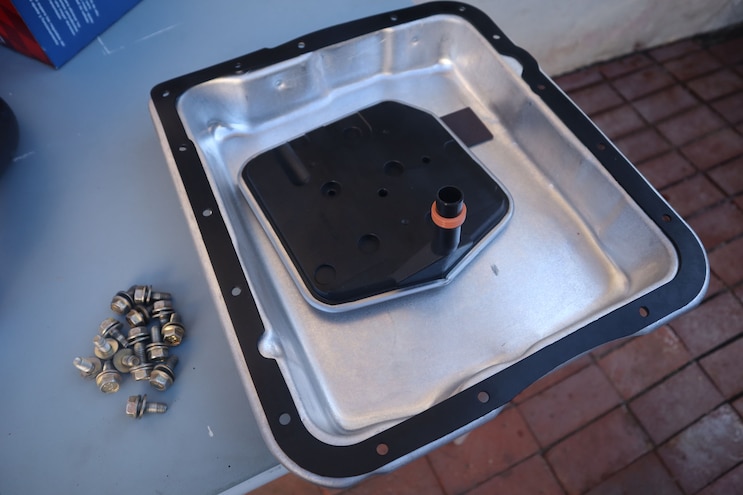 View Photo Gallery | 19 Photos
Photo 12/19   |   Soon, everything was all cleaned up and ready to be reinstalled, including the new gasket and filter. 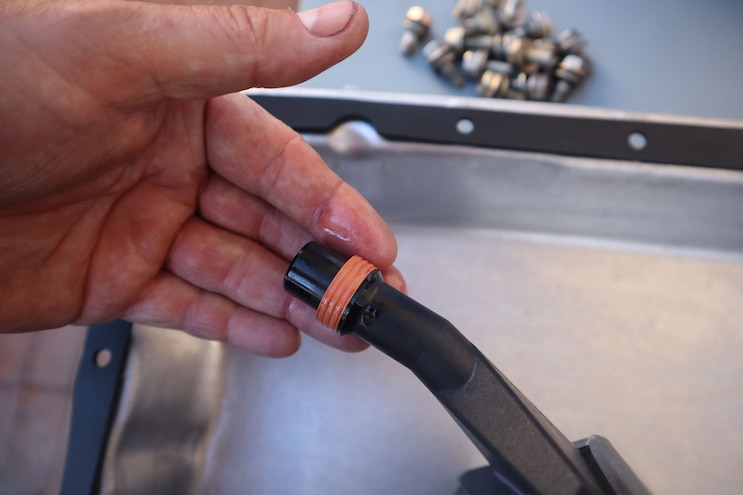 View Photo Gallery | 19 Photos
Photo 13/19   |   We added a little fluid to the new filter seal, just to make sure it seats all the way in the case with ease. 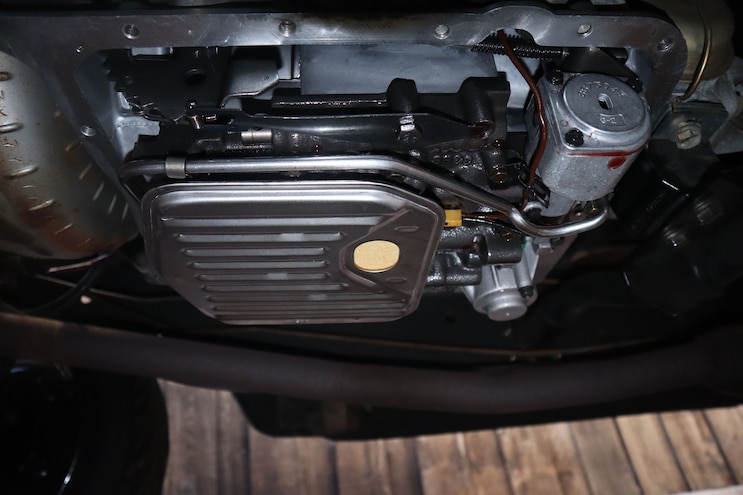 View Photo Gallery | 19 Photos
Photo 14/19   |   The filter was pushed into place and we were ready for the pan. We wiped down the mounting area with lacquer thinner to make sure it was totally free of debris. 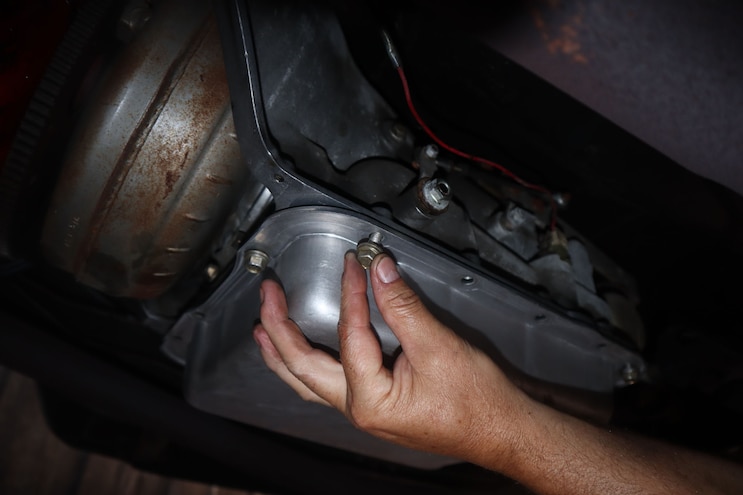 View Photo Gallery | 19 Photos
Photo 15/19   |   Normally we use a little adhesive with the pan, but the directions said not to with this type of gasket. We set the pan in place and got the bolts started. 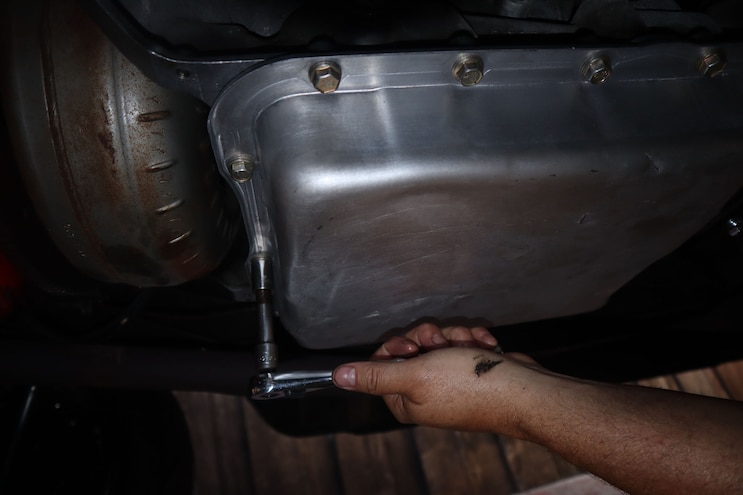 View Photo Gallery | 19 Photos
Photo 16/19   |   Now we snugged the bolts down in an alternating pattern. The torque specs for the pan bolts is 80-inch-pounds. 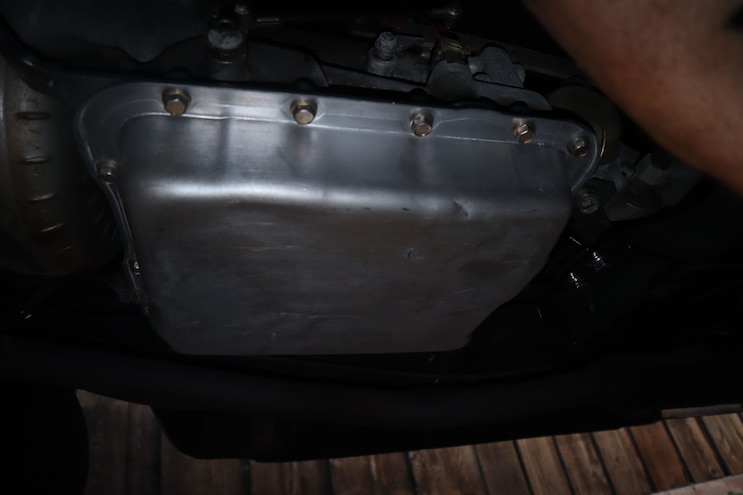 View Photo Gallery | 19 Photos
Photo 17/19   |   At this point, we were all done underneath the truck and even cleaned up all around the area. 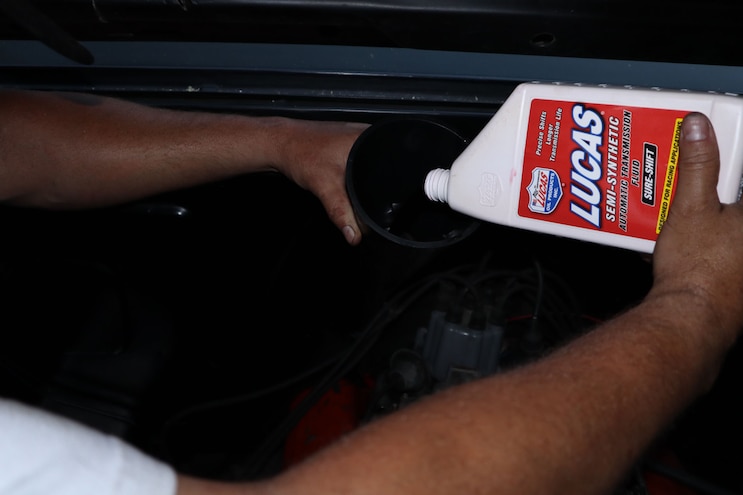 View Photo Gallery | 19 Photos
Photo 18/19   |   With the truck on the ground. We added the fluid. Since we were obviously low before, and we know that the 700R4 will usually take six quarts after a service, we added four, ran the truck up to temperature, checked our dipstick, and continued with process up to six quarts so we would now know exactly how to read on our fancy-if-not-accurate dipstick. 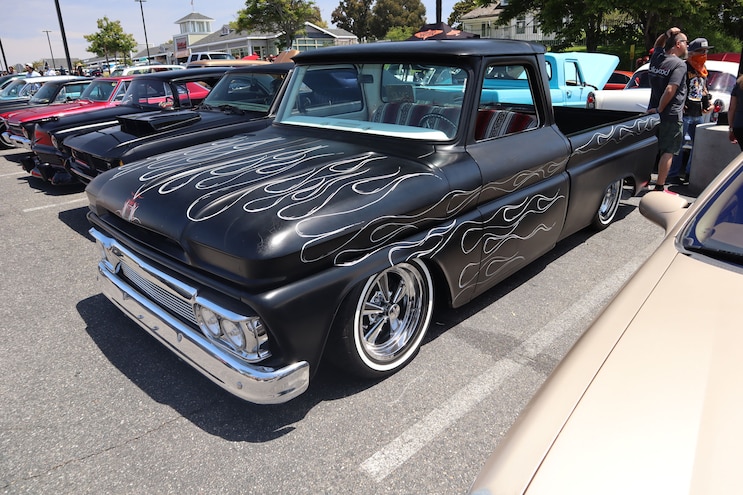 View Photo Gallery | 19 Photos
Photo 19/19   |   And just like that, after a few days of labor, our project '64 has a whole new lease on life. The truck ran cooler, quieter, and hasn't dropped out of overdrive prematurely since! A great running truck is all the motivation we need to keep working on it- and hitting all the local cruises!