Our Tired Tires Get Retired 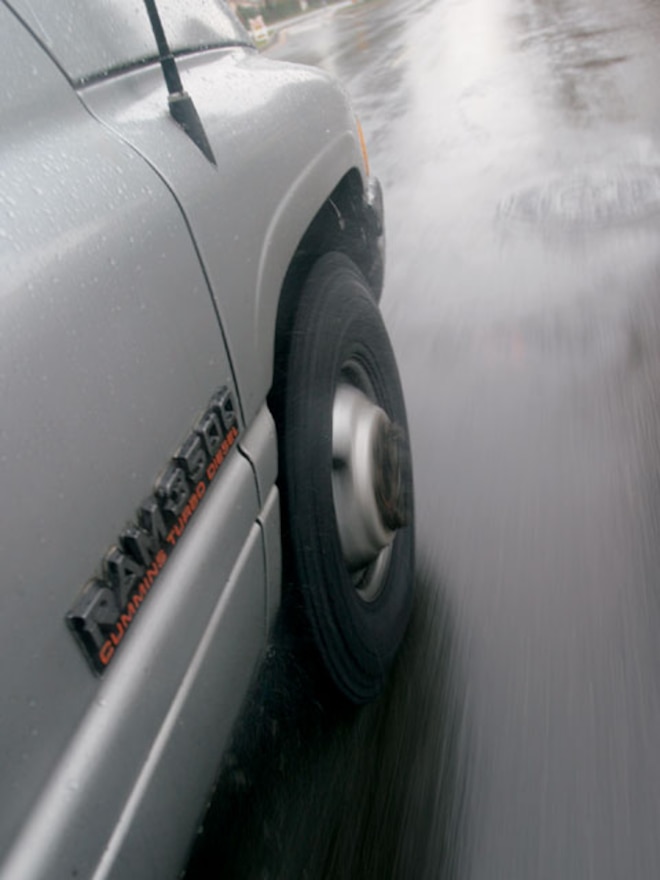 View Photo Gallery | 15 Photos
Photo 2/15   |   nitto Tire Test outside Tire View
Our Project 12 valve has seen a lot of miles, and its mismatched tires had reached the end of their lifespan. We were especially worried about the front tires, which had seen about 20,000 miles on a bad alignment. It was time for new ones, and we were on the lookout for tire that would be good for the truck's all-purpose needs.
The tires we chose were nitto Dura Grapplers. They had a tread pattern that was aggressive enough for good traction in the dirt and in wet weather, had an "E" load rating, and included a 45,000- mile warranty. Nitto also claimed that even with the deep tread, ride noise would still be at a minimum. Once we had our seven new tires (don't forget the spare!) We started our testing. 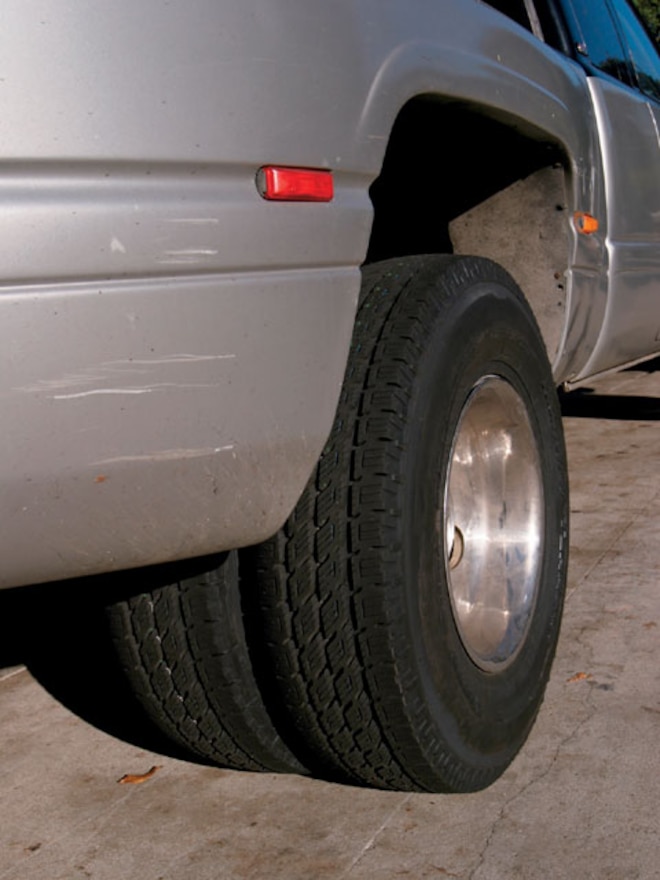 View Photo Gallery | 15 Photos
Photo 3/15   |   nitto Tire Test dually
For our first series of tests, we used an accelerometer to measure traction in both wet and dry conditions. With our old tires, our best dry pavement launch produced an acceleration reading of .59Gs.
With the new nittos in place, we got a reading of .62Gs, or about a 5-percent improvement. Nitto claims great wet weather traction, and we were lucky enough to get rain on the day of our test. Our testing procedure in wet conditions was to accelerate hard in second gear, then let off as soon as the rear tires broke loose. We'd then record the peak number. In the wet, our previous best was a .41G reading, so we were pleased when the nittos produced a .45G maximum-a solid, 10-percent improvement. 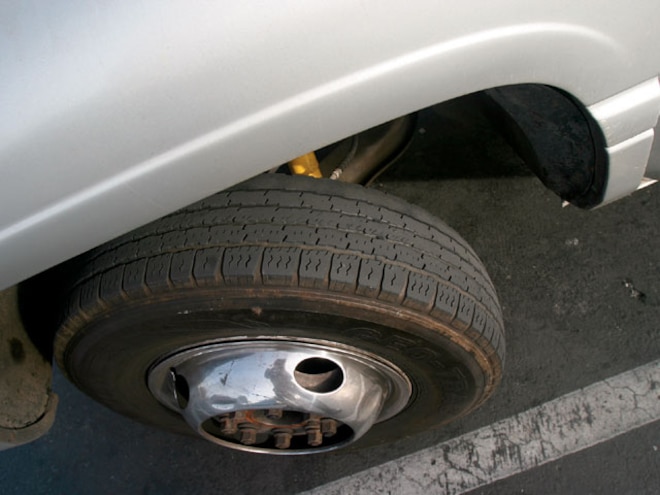 View Photo Gallery | 15 Photos
Photo 4/15   |   Even from a few feet away, it was clear our front tires were also in bad shape.
For the noise test, we based our readings on an "annoyance scale." We rolled up the windows, turned the radio off, and drove for a while just listening to the tires. Even if it's not loud, a steady hum can drive the driver nuts after a while. Our stock tires were full on-road tread, so they made almost no noise at all. Since the Dura Grapplers were more of an all-around tire, we were expecting some sound, but were pleasantly surprised. Even with six of them making contact with the road, they were barley audible, even at 75 mph.
When our testing was over, we found the Dura Grapplers' performance to be as good or better than advertised. Sizes range from 235/85r16 all the way up to 275/65r20's. For those of you who deal with bad weather, you'll also be happy to know the tires are m&S rated (mud and snow), so dealing with the elements should be no problem. Price is also a factor when buying seven tires, and considering their mileage (tread wear) rating, load rating, and traction capabilities, we consider the Dura Grapplers to be a pretty good value.

View Photo Gallery | 15 Photos
Photo 8/15   |   nitto Tire Test accelerometer
What's An Accelerometer?An Accelerometer Is A Device That Is Used To Measure G-forces. Braking, acceleration, and handling can all be broken down into how many Gs the vehicle can produce. For a street vehicle, anywhere between .4 and .7G is a normal First gear acceleration reading, while 4WD trucks or cars with sticky tires can produce .7 to 1.0G upon a hard launch. Often, traction, and not horsepower is a limiting factor, and since our dualie could spin all four rear tires in first gear upon accelerating, we were able to use a G-tech accelerometer to measure traction. As a side note, many electronic accelerometers can be used to time 0-60mph runs, quarter-mile times, and more. More often than not, they are very accurate as long as the road surface is completely flat and the machine is zeroed out at a perfect .00G before acceleration tests begin.