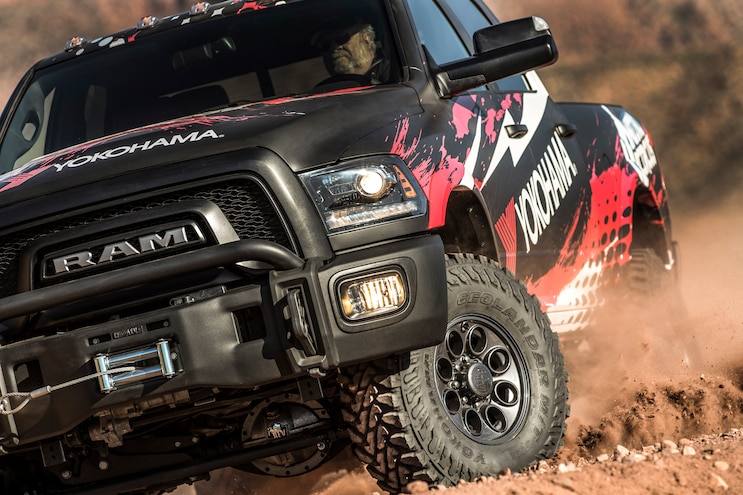 When we first started out in this game, tire technology evolved slowly, and we were always chomping at the bit for something new, as it could sometimes be years before a new or redesigned off-road-rated truck tire hit the market. These days, the new creations come fast and furious, with many more brands reinventing themselves much more often. Some might say we even get a little jaded about it from time to time.
But when Yokohama Tire extended the invite to come out to western Colorado and test out their new, built-from-scratch, Geolander M/T G003, we jumped right onboard. Yokohama put themselves on the map many years ago in the desert racing world with the Super Digger, a tire that held its own (some would say dominated) all the way into the ’90s with the introduction of the very first of the Geolander line. 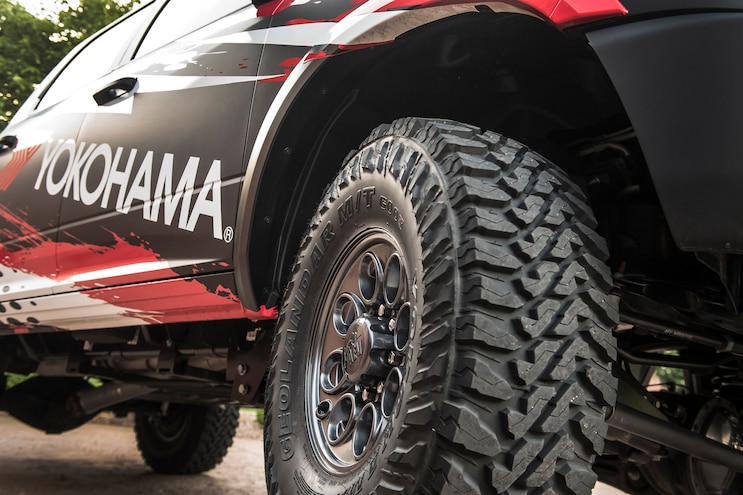 View Photo Gallery | 25 Photos
Photo 2/25   |   Yokohama Geolander M T G003
This new M/T G003 was designed from the ground up. It’s a tall order to create a tire that hardcore off-roaders appreciate that still has decent road manners. After three days of driving on them in various trucks, SUVs, and purpose-built race vehicles, though, we think they pulled it off. And the marketing department has doubled down with its “Go Strong!” campaign. Not only are they sponsoring Travis Pastrana’s Nitro Circus series and giving away the fully built Ram Power Wagon you see on these pages, but they also signed on as the title sponsor of the NORRA Mexican 1000 race. Something that you know we’re a big fan of around here, if you’re a regular reader.
Getting into the nuts and bolts of the M/T G003, it’s available in 37 sizes right out of the box, ranging from 15- to 20-inch rim diameters and a 37-inch height. New features on the M/T include an aggressive sidewall design, Geo-Shield technology, and a special triple-polymer compound. According to the company, that gives the new Geolander “intimidating good looks, superior strength, proven performance, and excellent traction in all on- and off-road terrains, from everyday highway driving to attacking steep, jagged rocks, muddy trails, and desert sand.”
Rigorous independent testing shows that the M/T outperforms leading competitors in several important areas, including longer-lasting tread life (8 percent longer) and shorter stopping distance on wet roads (51 feet shorter). Plus, testing reveals the M/T is 2.3 decibels quieter on the road. 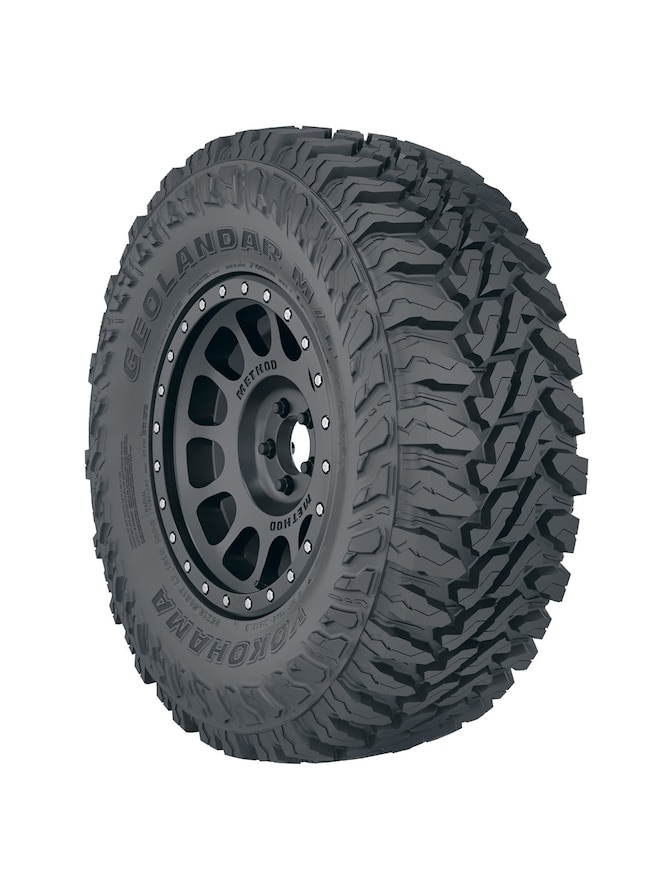 View Photo Gallery | 25 Photos
Photo 3/25   |   Yokohama Geolander M T G003 Tire
Digging even deeper into the M/T G003, we learned more about the all-new design. The Geo-Shield construction incorporates multiple sidewall plies, steel belts, a full nylon cap, and a high turn-up carcass, which according to Yokohama, creates a stronger tire that provides strength and protection, even in the harshest off-road conditions. Their longer-lasting tread is the result of a new, high-density compound and a wider, flatter profile that creates exceptional wear performance. Speaking of traction, it comes from a triple-polymer tread compound combined with optimized sipes and an ideal block-to-void ratio, which provide outstanding grip and significantly shorter stopping distances on wet roads. The noticeably quieter ride on the road is due to the advanced variable-pitch tread on the M/T, which assures a quiet, on-highway ride while maintaining off-road performance. The aggressive sidewall armor gives the tire a distinct look and delivers off-road traction and damage protection.
Once we arrived in Gateway, Colorado, we first jumped in the AEV and 37-inch Geolander M/T G003-equipped Ram Power Wagon for a Truckin-exclusive test drive down the road and up a mountain. While we were given explicit instructions to take care of the truck, as it was to debut at a Nitro Circus event the next week, we wasted no time filthifying the truck, running it up some extremely steep dirt roads at probably a higher speed than the marketing folks would have recommended. What we quickly learned was this tire was not intimidated, and tires were still as quiet as any 37-inch tire on an HD truck could be. All of the mud we acquired was back out of the tread in no time. 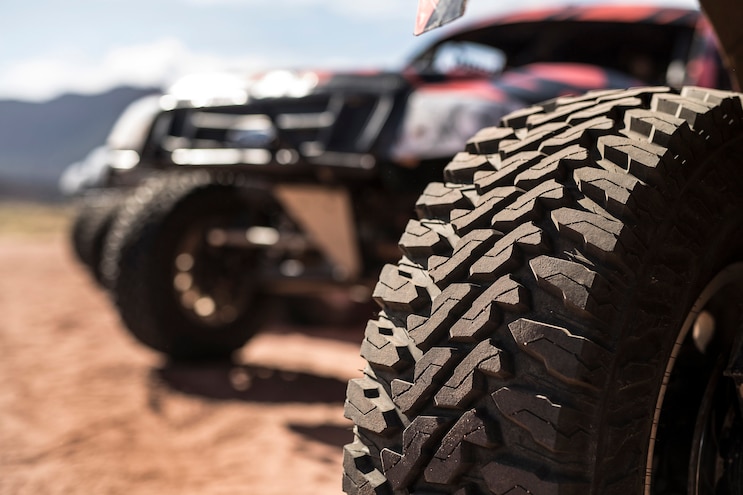 View Photo Gallery | 25 Photos
Photo 4/25   |   Yokohama Geolander M T G003 Tread
The next, day we split our time between some trail driving in Geolander-equipped, but otherwise stock, Jeep JKs, and some track time in the VORE race trucks on a track prepped by none other than Supercross champ Ricky Johnson. We took in the breathtaking views as we meandered along the mountaintops, moving from Colorado to Utah and back again many times. We took every opportunity possible to try and break the tires loose and hitting any obstacle possible on our slow-speed journey. The tires performed great the whole time, including the highway drive back to camp. Later on in the race trucks, which we had some previous experience in, we skipped the lecture and headed straight for the jumps. Once again, the M/T G003s did everything they were supposed to do and nothing that they weren’t. On an entertaining side note, we’re pretty sure we had the big air of the day award locked, until Ricky took us for a ride—and to school!
People have all sorts of criteria for what they want to see in a mud-terrain tire. No one tire can be all things to all people. But in our opinion, the new Yokohama Geolander comes close. The impressively quiet road manners and great traction on both hard, soft, and muddy terrain was enough to elevate this tire to the ranks of the existing top brands in the segment for us. And the looks will be right at home on most Truckin-style builds. And with its involvement in NORRA and Nitro Circus, we’re certain you will be hearing a lot more about the new Geolander M/T G003.