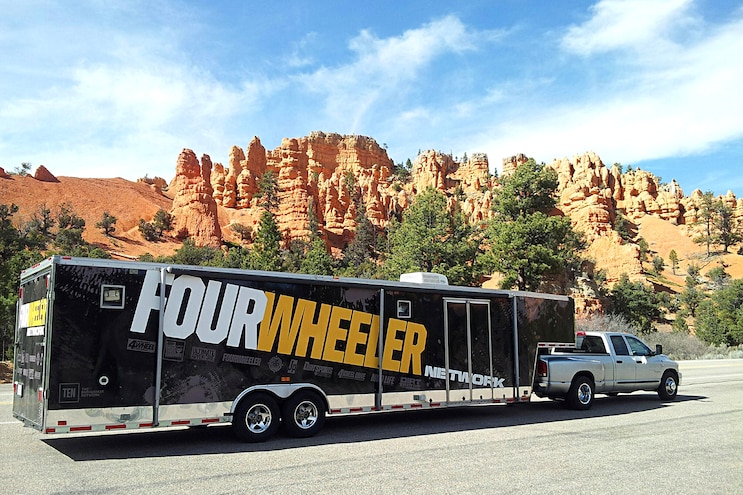 Aging tires is an unfortunate problem that occurs with all trailers at some point. A set of boots may have provided many years of reliable service and look good to the naked eye, showing no signs of weathering and still harnessing plenty of tread. But as a tire ages, years of use and even sitting parked can cause its internal structure to break down. This deterioration can eventually lead to a catastrophic failure. (The National Highway Traffic Safety Administration states that tire manufacturers and automakers have individual guidelines for how long a tire is good. Many have concluded that after six years, tire degradation can become a safety issue, with the chances of blowouts and failures becoming higher).
A tire blowing out due to age is exactly what happened to the Four Wheeler Network’s gooseneck trailer in April 2016 while en route to Moab, Utah. Prior to embarking on the trip, we inspected all the tires and checked the air pressure, but the rubber’s age was not considered. So, after thousands of reliable miles, one of the eight-year-old tires let go. Luckily, when it happened, the truck and trailer were safely guided to the highway’s shoulder, where the spare (also eight years old) was installed and the trip continued. Fortunately, the remaining old pieces stayed intact and there were no further incidents during the trip.
Not long after the trailer returned from the trip, a search began for the best replacement footware. The original 235/85R16 load-range G trailer tires are considered an easy replacement. However, instead of just quickly installing more of the same brand, size, and type of tires, we did some research to see if there were alternatives that could possibly be better. We wanted to see if the trailer’s handling could improve and if a sturdier foundation for the heavyweight (14,000-pound GVWR) could be found. Several different types of 16-inch trailer tires were researched. Boar Wheel is among the brands we analyzed, as it makes wheels that allow us to convert to a commercial-grade 19.5-inch tire.

View Photo Gallery | 20 Photos
Photo 2/20   |   This is the Four Wheeler Network’s fifth-wheel trailer, with its original 16-inch tires and wheels.
Boar’s steel and aluminum wheels are designed to fit eight-lug trailer axles and allow the use of a stouter 225/70R19.5 14-ply, load-range G commercial-grade tire. The bigger-diameter tire has a lower profile and less sidewall flex when cornering, driving, and maneuvering. Reduced flex gives a trailer greater stability on and off the road. Another benefit of a stiffer sidewall is that it allows a tire to skid easier during tight turns, which reduces the chance of a sidewall distorting or lug nut being damaged from side load.
The trailer’s original 235/85R16 and the 225/70R19.5 both have G load ranges and the same rolling radius. One advantage the 19.5 provides is a maximum load rating of 3,970 pounds, which is 220 pounds more per tire than the 16s. The increase creates a total load capacity that is 1,880 pounds higher than our trailer’s rated weight limit. So, if the trailer is loaded to its maximum, there is a greater safety margin than we previously had.
After considering all the benefits of upgrading to the larger 19.5-inch wheels, we called Boar Wheel and ordered a set of Cruiser 67 aluminum alloy wheels (rated at 6,050 pounds each) with TR685 225/70R19.5 tires from Triangle Tire mounted on them. The wheels were ordered for the correct stud size and new lug nuts we’re using to guarantee proper fitment.
A few weeks later, the Boar Wheel and Triangle Tire package arrived, and we wasted no time bolting it on. 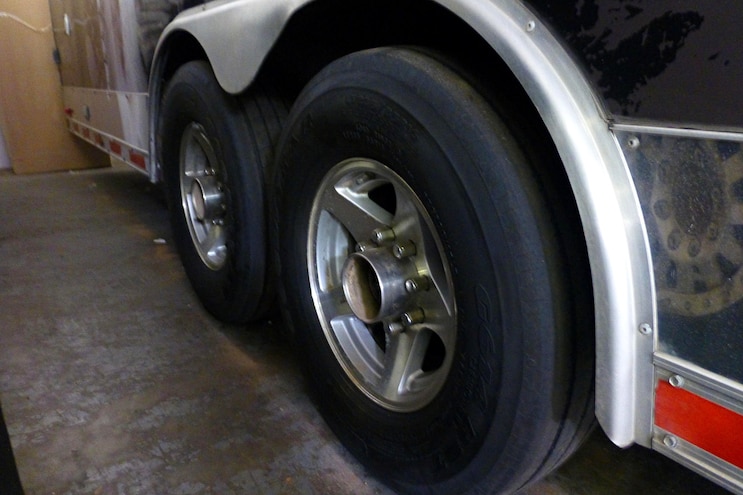 View Photo Gallery | 20 Photos
Photo 3/20   |   While the old rubber has seen a lot of miles and hard use, old age was ultimately the cause of its demise. 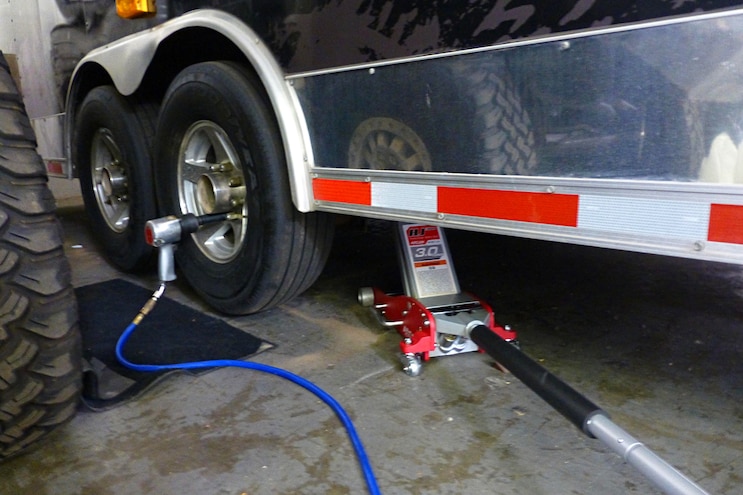 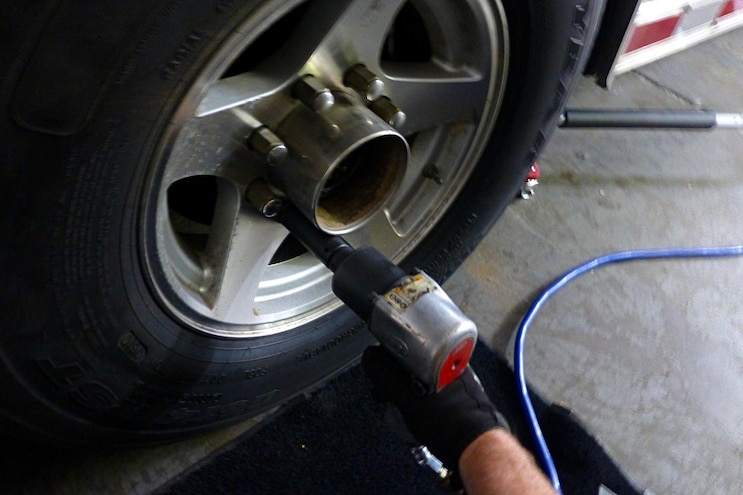 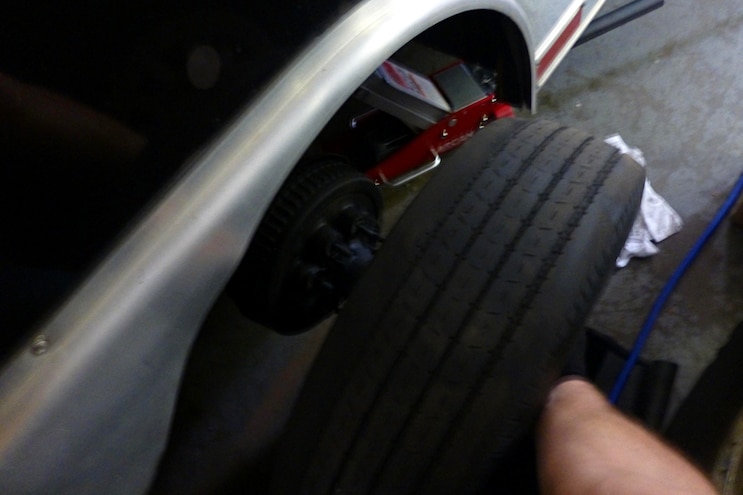 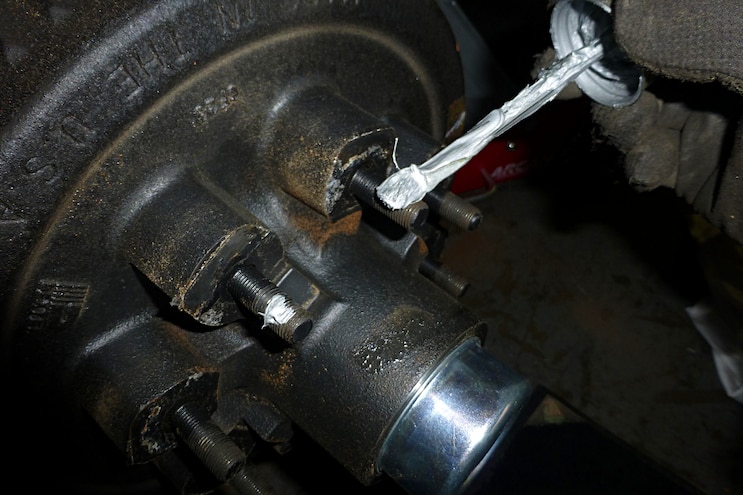 View Photo Gallery | 20 Photos
Photo 7/20   |   Before the new tires and wheels are installed, all the studs are coated with a dab of antiseize to ensure the lug nuts thread on easily and will come off with little effort after exposure to harsh weather and conditions. 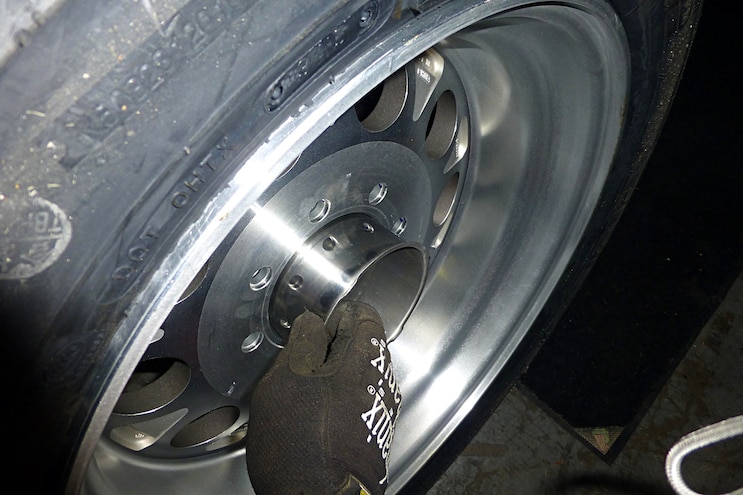 View Photo Gallery | 20 Photos
Photo 8/20   |   The new center caps are installed in the wheels before being mounted. 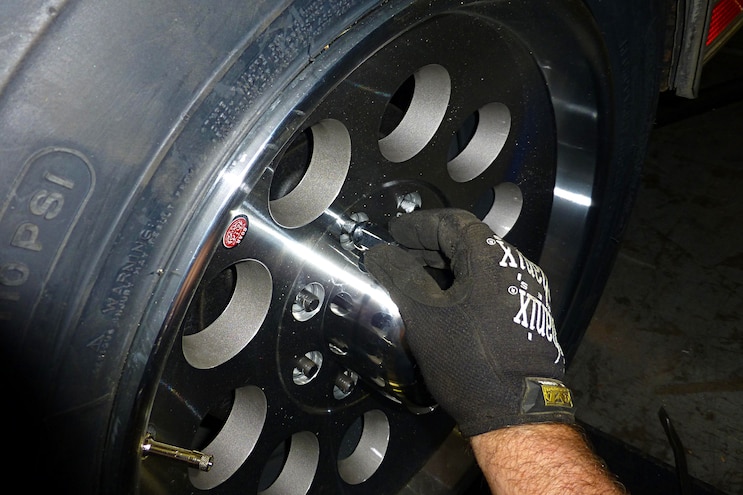 View Photo Gallery | 20 Photos
Photo 9/20   |   Running the lug nuts down by hand before blasting them down with an impact gun helps prevent them from being cross-threaded. 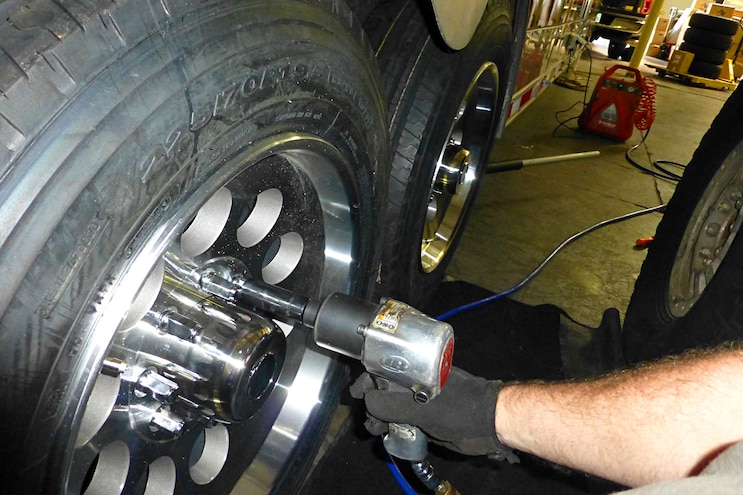 View Photo Gallery | 20 Photos
Photo 11/20   |   After all the wheels are installed, the floor jack is lowered and removed. All the lug nuts are then checked to confirm they are tight. 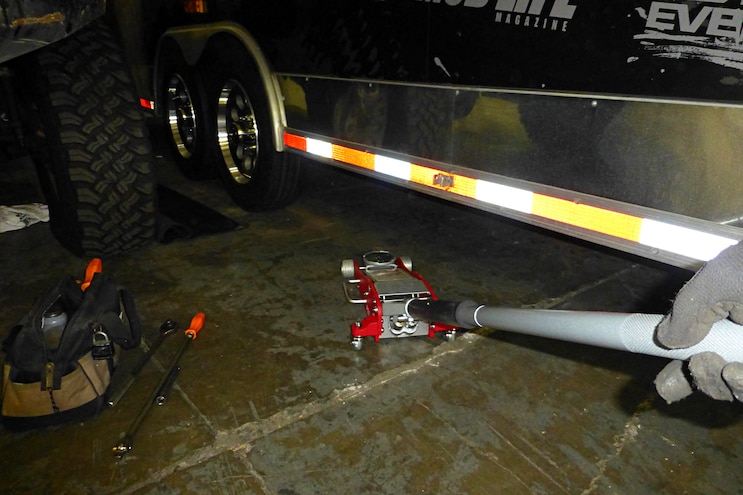 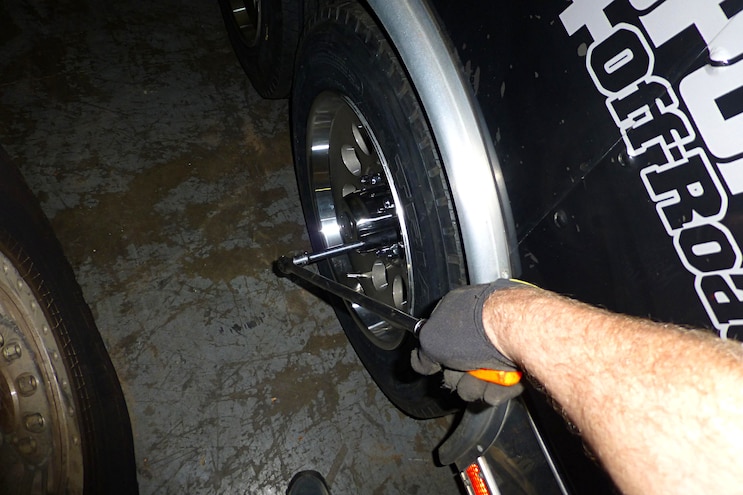 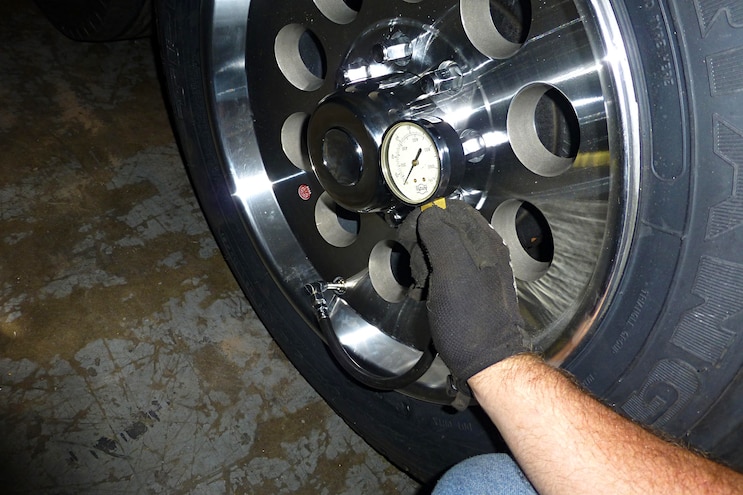 View Photo Gallery | 20 Photos
Photo 14/20   |   Air pressure for each tire is checked to make sure they are all the same and at the correct setting. Tire pressure greatly affects a trailer’s handling, especially when it’s loaded close to capacity. 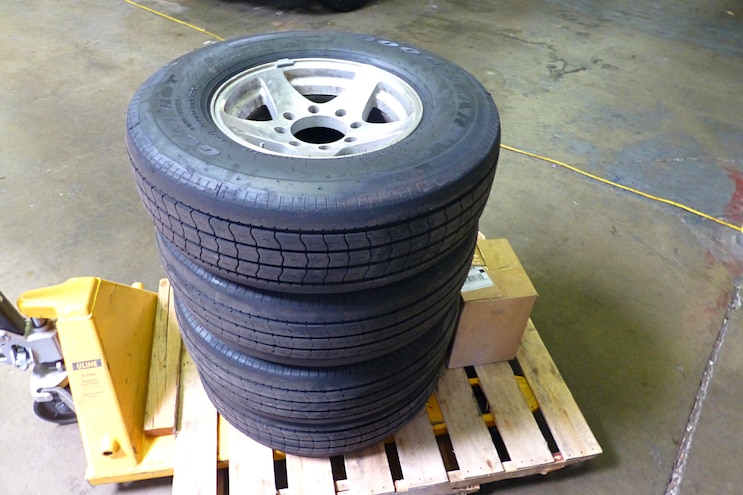 View Photo Gallery | 20 Photos
Photo 15/20   |   With no foreseeable use for the old tires and wheels, we stacked everything on a pallet and stored it out of the way.

Our Impressions After a Year

After being installed in 2017, the wheel/tire combo has covered thousands of miles of paved and harsh dirt roads, along with temperatures ranging from below freezing to triple-digit heat. However, despite everything we have put this setup through, the Four Wheeler Network trailer’s new Boar Wheel Cruiser 67 wheels and Triangle Tire tires have performed superbly, showing very little signs of wear and trouble-free care. The trailer has great stability at highway speeds, in wet conditions, and during high winds. We have loaded it with a vehicle and cargo on numerous occasions, and the tires have handled the weight with ease. The new rollers have also made it noticeably easier to maneuver the trailer in tight spaces. And the large, polished-aluminum wheels look good when we’re going down the road. 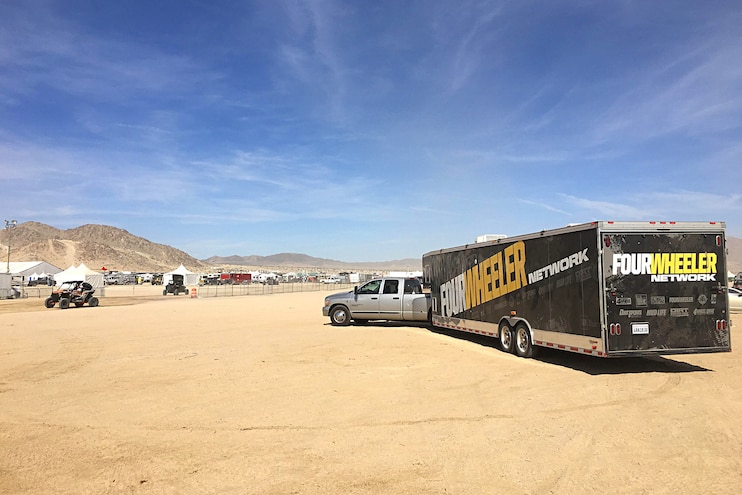