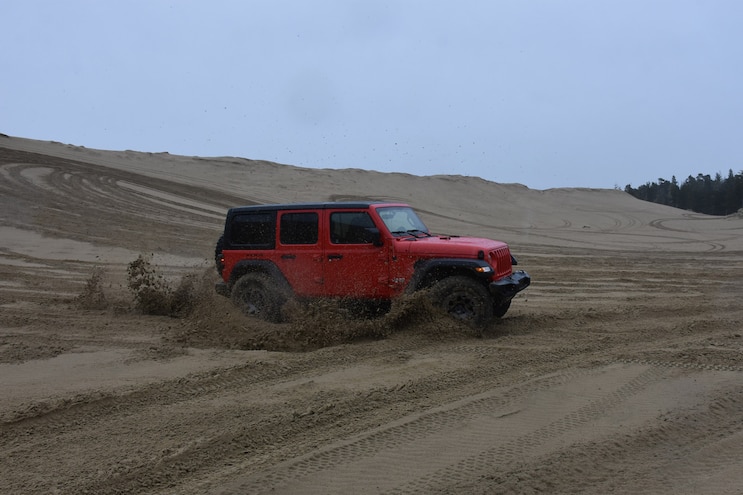 What do you do when a brand-new off-road tire comes on the market and you have a bunch of experienced magazine guys itching to test it? Stuff those expert magazine guys into a mildly lifted but otherwise stock Jeep Wrangler JL Sport, install said tires (in 35x12.50R17 flavor), turn them loose somewhere in Oregon, and let them have at it.
That’s just what we did. Clocking about a thousand miles of on-road and off-road abuse over the course of four days, the four of us (to be named in a minute) all got ample time to see how Nexen Tire’s newest offering performed. The Roadian MTX (MT stands for Mud-Terrain Extreme) is a new tire from a Korean tire company, Nexen. While the name may sound new, Nexen has been around under one name or another since 1942. Nexen’s goal is to build great tires with state-of-the-art manufacturing and innovation. The Roadian MTX is built to perform off-road as a radial tire with three-ply sidewalls, an aggressive patented tread block design with plenty of siping, dual sidewall designs dubbed the Machine and the Beast, and an available F-load weight rating for on-road weight-bearing confidence, all on a carcass ready to be aired down on the trail.
You may be asking yourself why we, of all people, get to do this? What makes us uniquely qualified to test and tell how this new tire performs? Well, between Stuart Bourdon (Jp magazine tech editor), Sean Holman (Four Wheeler Network’s content director), Jared Korfage (Four Wheeler magazine staff editor, and yours truly (Petersen’s 4-Wheel & Off-Road technical editor), we have decades of experience evaluating off-road tires.
So, did the Nexen Roadian MTX live up to the name? From dunes to wet and muddy rocks and deep snow, and on wet, snowy, and dry pavement and hard-packed dirt, we put these tires through their paces and found their strengths (which are many) and weaknesses (which are few). In short, yes. Check it out.
Wet dune sand at the Oregon Dunes National Recreation Area posed no challenge for the Nexen Roadian MTXs on our 2018 JL Wrangler Unlimited. The steep dunes were a blast to play in. Try as we might with the tires aired down to about 15 psi, we couldn’t get the Jeep stuck without heading straight up the back side of a dune (where anything would dig in). With the Wrangler in low range and the transmission in Drive, the 3.6L ripped through the first few gears of the eight-speed auto. 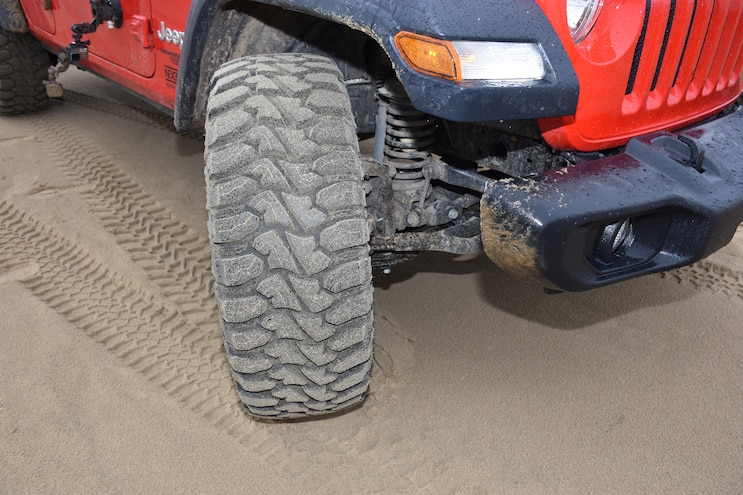 View Photo Gallery | 14 Photos
Photo 7/14   |   The sharp edges, sipes, and widely spaced tread lugs helped tear into the sand, providing reliable traction anywhere on the dunes. Those tread lugs that we love in the dunes (and everywhere else off-road) led to the tires’ only real weakness, which is they are a tad noisy on pavement. We’ll take that as a compromise for strength and traction. 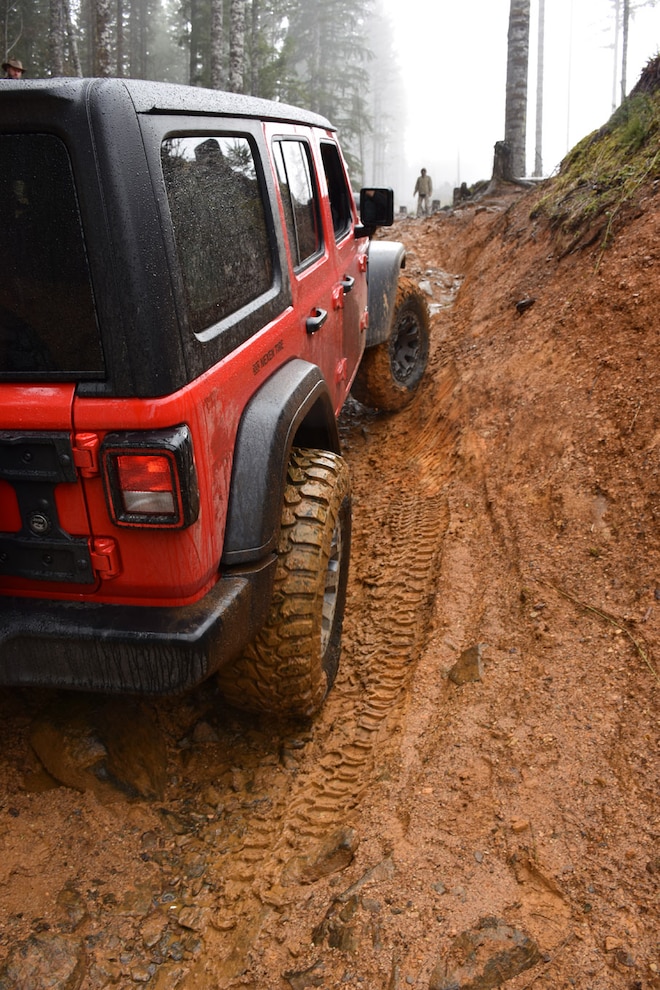 View Photo Gallery | 14 Photos
Photo 8/14   |   The dunes were a blast, but we spend nights drooling and dreaming of technical trails like those we found in the Tillamook State Forest, west of the weird town of Portland, Oregon. These trails would have been a challenge to any Jeep Wrangler Sport on a dry day, but add seasonal rains (and that Sasquatch) and things got really interesting with slick sharp rocks mixed with plenty of slick greasy clay. 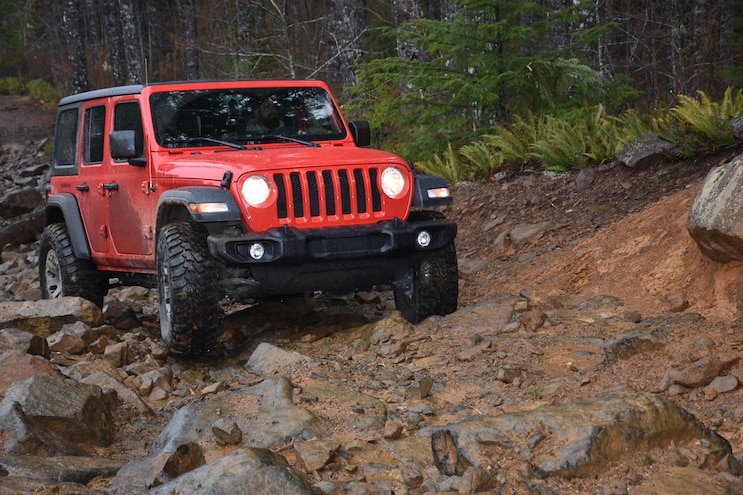 View Photo Gallery | 14 Photos
Photo 9/14   |   On the parts of the trails we ran in Tillamook that weren’t coated in greasy clay the Roadians at 12-15 psi wrapped around the pointy rocks and tree roots to grab with impunity. We noticed no cuts or chunking of the new tires during this part (and the rest) of the trip despite our overtly abusive driving. 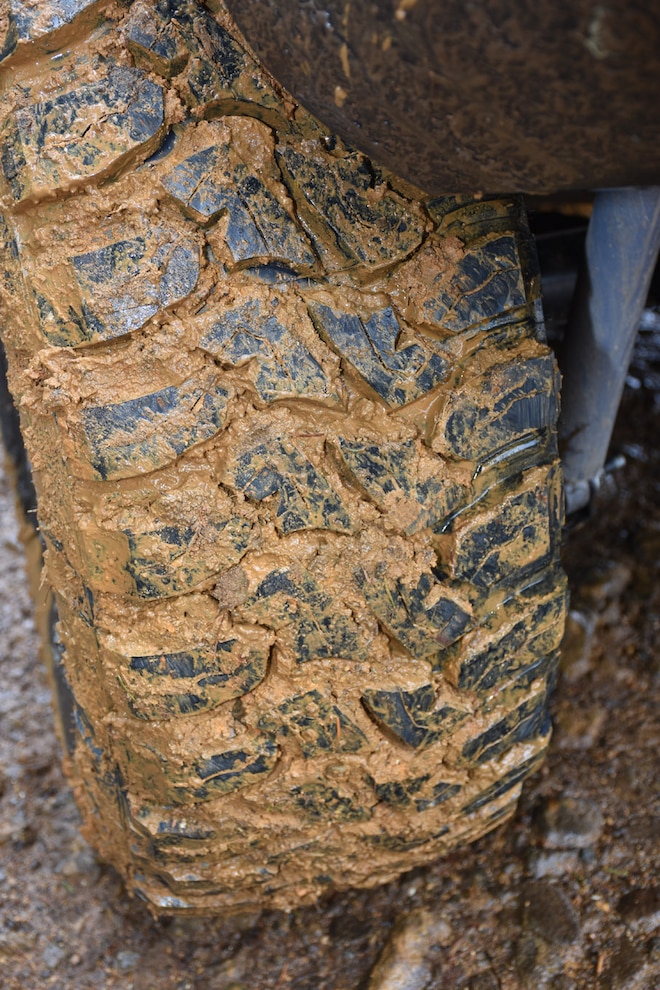 View Photo Gallery | 14 Photos
Photo 10/14   |   While we did get to see how the Nexen Roadian MTXs handled the mud while very slick at times, unfortunately none of the mud was too deep. Still, traction was good and the widely spaced lugs cleared the sticky orange goo easily with a little wheel speed. Stone ejector ribs in the recessed parts of the tire helped break surface tension and allowed tread blocks to clear and grab to keep us going forward. View Photo Gallery | 14 Photos
Photo 11/14   |   Somewhere near the end of our day playing in the trees of the Tillamook State Forest we ended up on a trail called Firebreak 5. Let’s just say that one section of this trail was just about all the JL Sport could handle. Wheel speed, bumping up mud-covered rocks, and letting the tires (and the Jeep’s traction control) work put this rig right at the limits of what we could (and should) have been doing. At the end of the day the Jeep’s belly had more than a few new dents and dings, but we made it to the top. The Roadian MTXs took as much of a beating as the new Red Wrangler did in stride again with no odd cuts or chunking. That is despite the sharp and wet rocks. 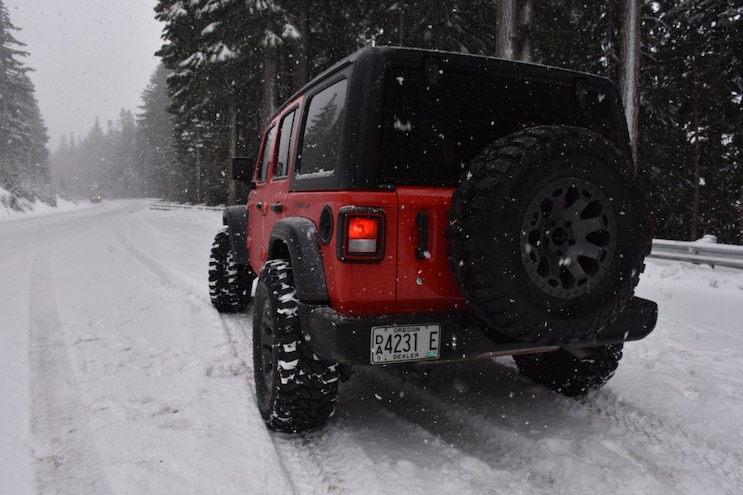 View Photo Gallery | 14 Photos
Photo 12/14   |   All told, we spent four days and covered roughly a thousand miles on everything from dry and wet interstate asphalt, packed snow and ice on asphalt and dirt, packed dirt, muddy rocks, sand, snowy rocks, and deep virgin snow. With all hands on deck getting a shot at just about all of the environments, it seemed that we were all pleasantly surprised by the Roadian MTX. Even on icy packed snow (they were closing one pass to unchained tires as we drove through it) the tires gripped and grabbed, only sliding when we pushed them to find their limits. For us that day, no chains were needed. 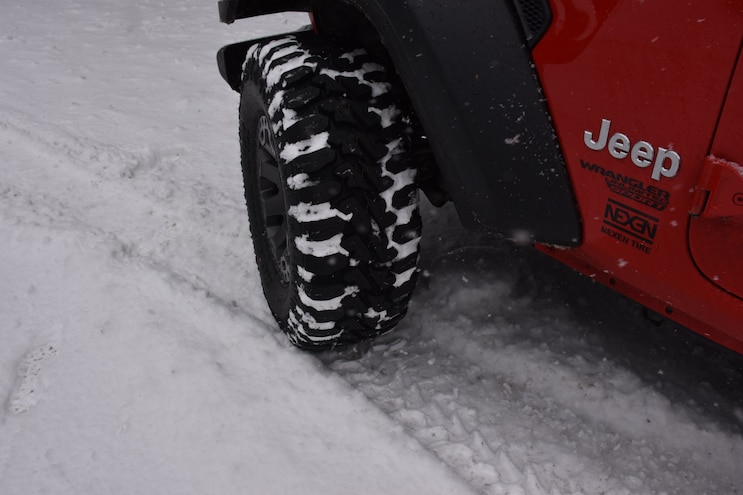 View Photo Gallery | 14 Photos
Photo 13/14   |   In the deep snow we aired down to about 10-12 psi and the Roadian MTXs flared out, floating on the soft stuff. Again those sharp, widely spaced lugs and intelligently placed sipes helped the tires grab and hold in the white. The tires also bounced and fended off several sharp rocks and sticks buried in the snow. 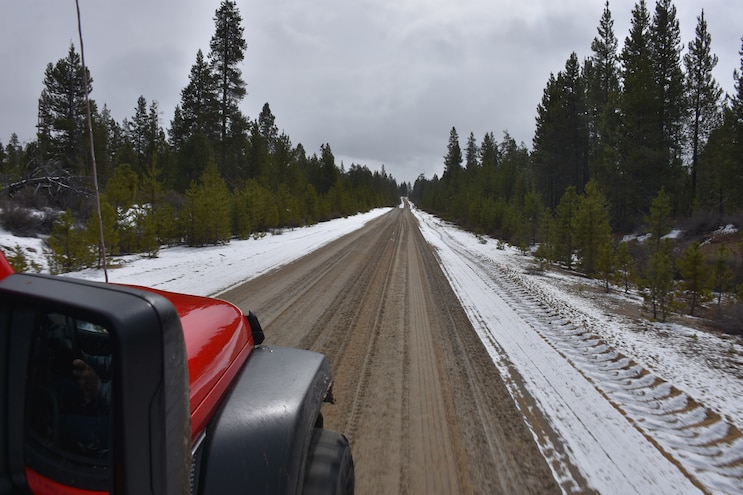 View Photo Gallery | 14 Photos
Photo 14/14   |   Covering a thousand miles with four guys packed in one Wrangler is a blast. Towards the end of the trip we decided to toss out the planned route and headed to forest service logging roads, which led us through places we never knew we would go. That’s the best part of a road trip, and the Nexen Roadian MTXs took us there and brought us back. These tires perform well in all the environments we put them in, including on-road and on well-groomed packed and loose dirt roads. They grab predictably and give just a little when you want that rear end to feel loose on a turn. They are a well-rounded, durable mud tire with a compound that is dialed for what we tested them in. We would like to try them further in dry heavy rock, sand, and for a bit longer to rack up more than a thousand miles to watch wear.