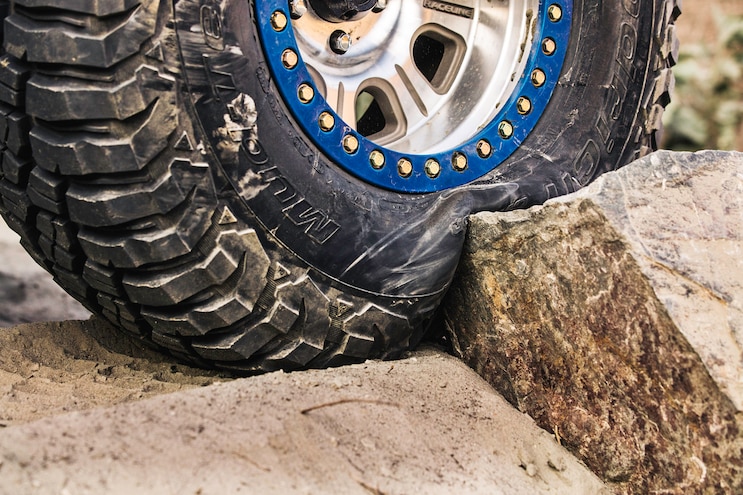 What better way to ring in the arrival of BFGoodrich’s new mud tire than to spin them across the country through every imaginable terrain? Yes, you read that correctly. In the span of 10,000 miles, we found a blizzard, mud bogs, sand dunes, gravel roads, rain, dirt, rocks, and open highway. 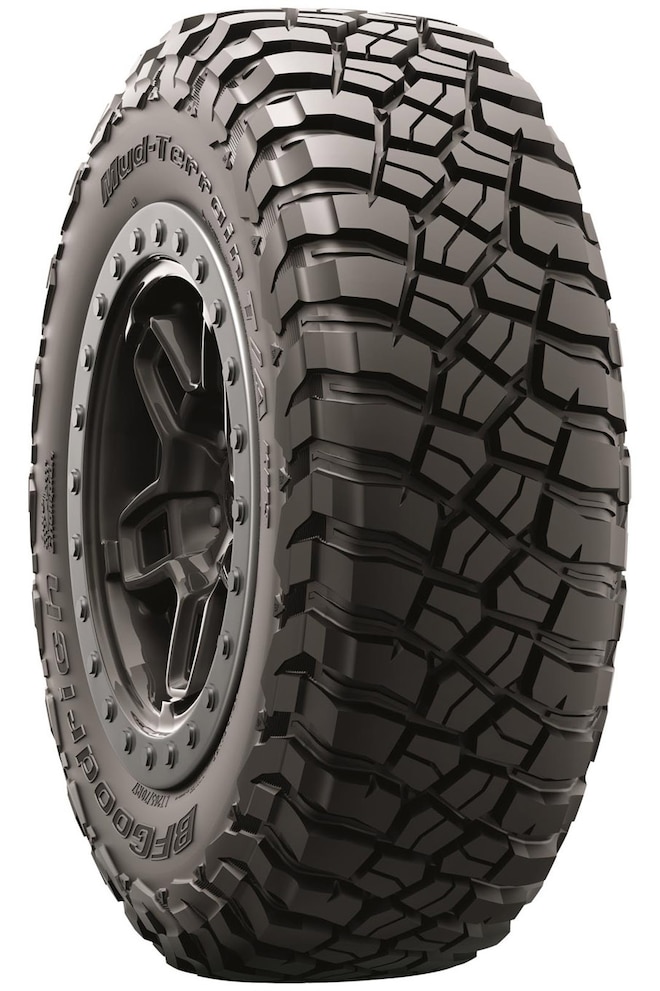 View Photo Gallery | 7 Photos
Photo 2/7   |   BFGoodrich Mud Terrain T A KM3
The Road
There’s a good chance your most-frequented terrain will be pavement. Around town, the largest difference between the Jeep’s stock rubbers and the KM3s were the visuals. The tire reminded us of James Bond: sharp looks and refinement on the road, but ready to fight to the death at a moment’s notice when the terrain turns sticky.
The Rocks
The jagged metamorphic rocks of Tucson were some of the first obstacles we rolled over with the KM3s. Though rough around the edges, Tucson geology can take on a polished look much like that of a billiard ball. No sweat for these tires. The rubber compound appeared to be softer than that of previous mud-terrains and suction-cupped itself to even the slipperiest of boulders like the feet of geckos. BFGoodrich calls this the Krawl-TEK compound and claims the KM3 offers an 8 percent improvement in rock traction over the previous mud-terrain.

View Photo Gallery | 7 Photos
Photo 3/7   |   BFGoodrich Mud Terrain T A KM3 Rocks
The Gravel
With a job like ours, therapy comes in the form of cruising gravel roads. We are the types who will detour from the interstate with the sole purpose of inserting some crushed rock into the monotony of our travel, and the KM3s were in full support of our decisions. Sprinkled between the tread blocks are raised triangular knobs tasked with punting out stones that try and embed themselves between the lugs. Stone drilling occurs when gravel remains between the treads and can lead to annoying punctures. We experienced nothing of the sort and were all-around pleased with the tires on gravel roads. Even when we got a bit throttle-happy in the loose turns, the KM3s held and released their grip as expected for a mud-terrain tire while still letting us have fun.
The Snow
For anyone who drives in snow, we had the privilege of turning down the temperature knob and burying the KM3s in some white stuff. Though these are not dedicated snow tires, we cruised straight past the chain-up stations during our time in the mountains. With temps hovering around 0 degrees Fahrenheit and the highway coated in the half-plowed snow and slush combo, we not only kept the Jeep on the road but happily between the lines as the lugs bit through the mush and stayed in contact with pavement. 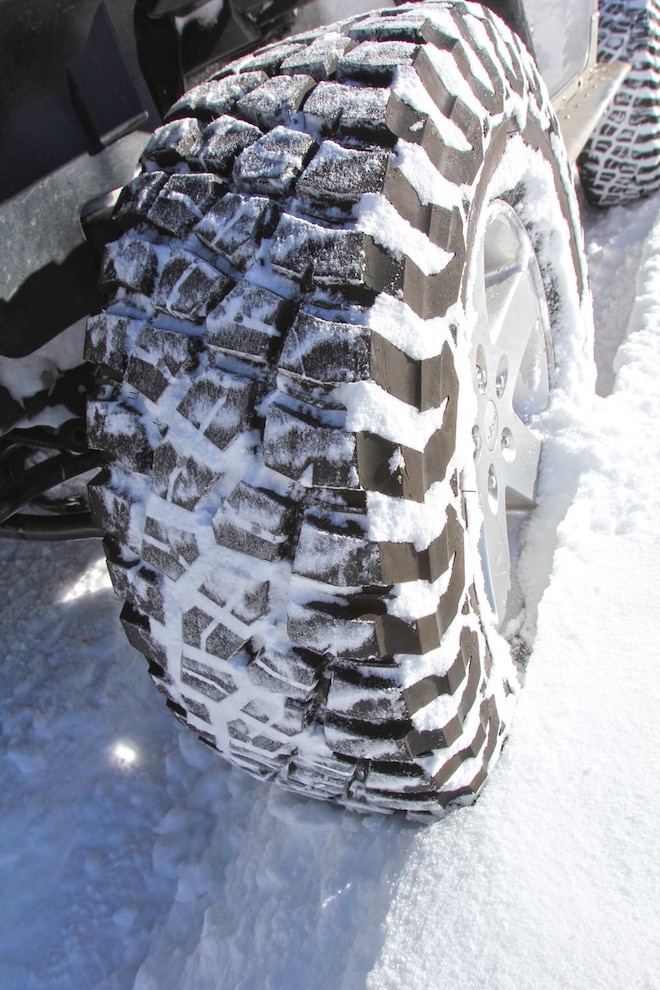 View Photo Gallery | 7 Photos
Photo 5/7   |   BFGoodrich Mud Terrain T A KM3 Snow
The Sand
Whether it was cruising the beach or ripping across an inland dune, the KM3s did not let us down in the sand. When aired down to 18 psi, we had no trouble starting off or steering in the deep sand. Even more impressive was the sand performance at street pressure, since we weren’t always within reach of a place to air our tires back up. Though definitely not dedicated sand paddles, we were able to float across the dunes in places where street tires have left us digging out the recovery gear. 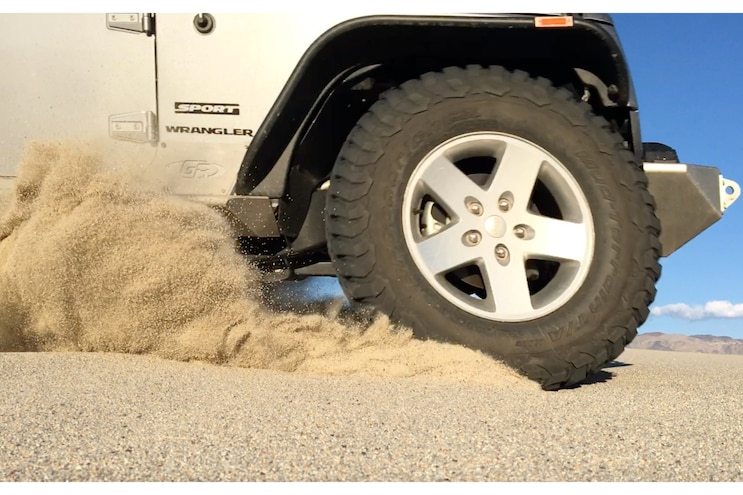 View Photo Gallery | 7 Photos
Photo 6/7   |   BFGoodrich Mud Terrain T A KM3 Sand
The Mud
Testing a mud-terrain tire would not be complete without a real trip into the slime, and it’s safe to say the KM3s come alive in the mud. Deep within the rain-soaked, rutted-out backcountry of Ohio, we tried our darndest to get ourselves stuck. Locals say the mud here is like porridge mixed with cement, with enough suction to swallow tracked vehicles. Having been through this country before with all-terrain tires, it was fascinating how the BFGoodrich mud-terrains made mountains into molehills. Even when gunky ruts tried to direct the Jeep sideways instead of forward, the Terrain-Attack tread blocks were there to keep us on track. 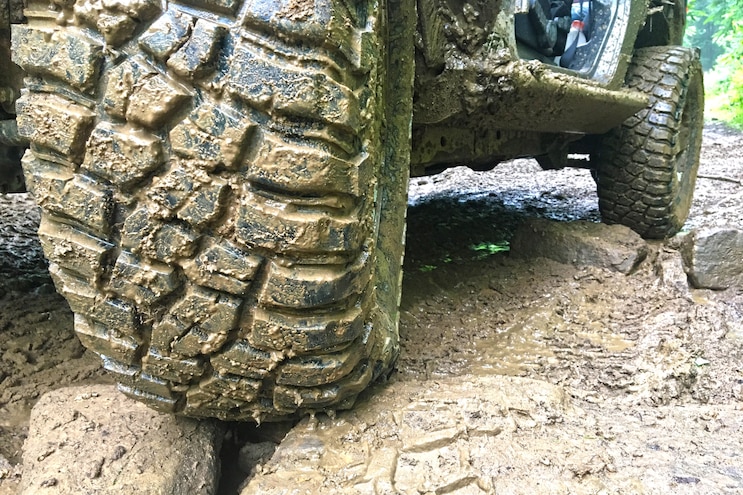 View Photo Gallery | 7 Photos
Photo 7/7   |   BFGoodrich Mud Terrain T A KM3 In Mud
Thoughts After 10,000 Miles
We were not gentle with the BFGoodrich KM3s, and one of the biggest surprises was how the spare tire remained untouched—we have a reputation for needing those more frequently than we’re proud to admit. The tires started with a tread depth of 18/32 and after 10,000 miles measured 16/32. Looking closely at the tread blocks, there were signs of scratches and nicks, which was expected for the way we frequently spun the tires to get up and over rocks, but no damage we’d call “chunking.”

- OF
By Jered Korfhage
32 Articles

Truckin
Truckin
how to
Trail Ready Tundra: Part One
We don’t get to do a lot of Toyota tech around here. It’s not because we don’t want to. We lov...
Jeremy Cook – Oct 1, 2019
Truck Trend Network
Truck Trend Network
how to
Sailun Terramax HLT Tires: Low-Priced Performance
There’s a common saying that even if you’re the most strident penny-pincher, you should still sh...
Brett T. Evans – Sep 20, 2019
Truckin
Truckin
how to
Suburban Refurbin’
By now, you’ve probably seen the previous article that began our Lifted versus Lowered one-day mak...
Bryan Fross – Sep 3, 2019
Truckin
Truckin
how to
One-Day Suburban Build: Part One
“Mom’s grocery getter” is a term we throw around that loosely describes that other vehicle tha...
Jeremy Cook – Jul 31, 2019
Join Our FREE Truck Trend Network Newsletter