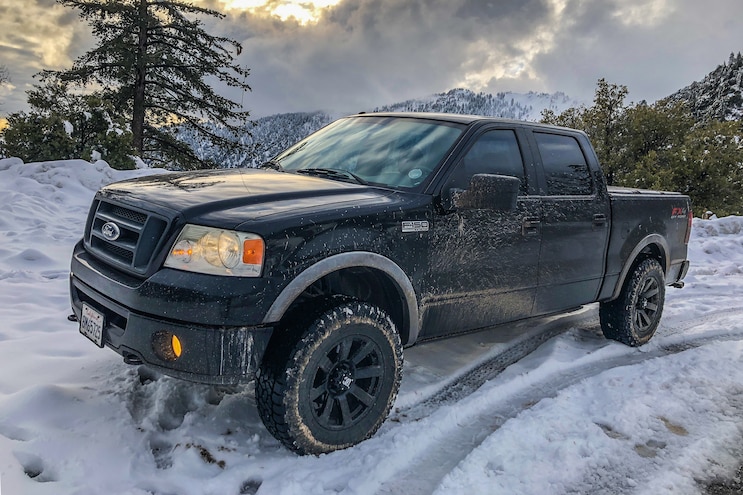 When Toyo announced in early 2020 that a new version of the company's already excellent all-terrain tire would be coming soon, we were excited. Then, when we found out just how good it was supposed to be, that excitement hit the extreme. Naturally, we found ourselves with both hands raised to be among the first to give the new Toyo Open Country A/T III a try.
To test the new Toyo A/T III we mounted a set of 275/70R18 tires on our 18x9-inch Dick Cepek DC Matrix wheels. These tires are a load-range E, measure out to 33.4 inches, are 11 inches wide, weigh 52 pounds, and are available with either outlined white letters or black sidewalls. We chose the black sidewalls.
For this new tire Toyo focused on making improvements to areas where the A/T II already shined. The company improved wet weather traction, durability, and treadwear life. Likely the biggest change was the addition of the three-peak mountain snowflake severe winter rating. The A/T III is available in 127 sizes in both LT and P-metric, for wheels from 15 to 22 inches, and come with a 50,000-mile (LT) or 65,000-mile (P-metric) treadwear warranty. Best of all, Toyo is offering a 500-mile or 45-day trial (check with your Toyo tire dealer for details, naturally).
In our last installment we got into what makes the new Toyo Open Country A/T III tires special. Now that we've actually had some time to put miles on the tires we're back with some thoughts. Most important of all, Toyo is correct in stating that the A/T III is better all around. It looks better than the older tire, has improved wet performance and great off-road chops, and is fabulous in snow.
On the highway we noticed that there is a slight hum at speed, but nothing that would be out of the ordinary or alarming. We've found quieter tires in the past, but not with tread patterns this aggressive. The tires hug the road great and do very well under hard braking. We haven't noticed any tread squirm, even on the relatively heavy truck. The Toyo A/T III tires excel in the rain, as well. Driving in near torrential rain with plenty of standing water on the roadway, we noticed no attempt at hydroplaning, and the truck stopped almost as surefootedly as it does on dry pavement.
Since our friends over at Four Wheeler already tested these tires in extreme off-road conditions, we went for a more everyman approach. Mud bogs aren't a normal occurrence; however, most pickup owners will find themselves on a muddy road at some point. Driving down a sloppy dirt road, the Open Country A/T III tires grip remarkably well and have no issues self-clearing. We really didn't even need four-wheel drive to keep forward momentum. They work even better on dry graded roads and easy trails.
Because of all the work Toyo went through to achieve the three peak mountain snowflake rating, we really wanted to drive through snow. Fortunately, we were able to find a small amount of snow-covered trail and highway to give them a test. While not a major winter storm, we did get to experience the great snow traction provided by the A/T III. We can say confidently that the Open Country A/T III will be a fantastic tire for folks who live where it snows for real.
To date, we've logged just over 500 miles on the new Toyo Open Country A/T III tires. While this may not seem like a ton, we're happy with the amount of varied terrain that we've been able to cover in just a short amount of time. With the tires greatly exceeding our every expectation, we're excited to see what the next 5,000 miles brings.

View Photo Gallery | 10 Photos
Photo 2/10   |   001 Toyo At3 All Terrain Tire Review
Our test subject for the new Toyo A/T III tires was our trusty workhorse 2007 Ford F-150. This truck is the closest thing to a "stock" vehicle we have in the test fleet, so it got the nomination to try these new Toyo tires. We installed a set of 275/70R18s on Dick Cepek wheels. The size roughly works out to 33.5 inches in diameter and 11 inches wide. 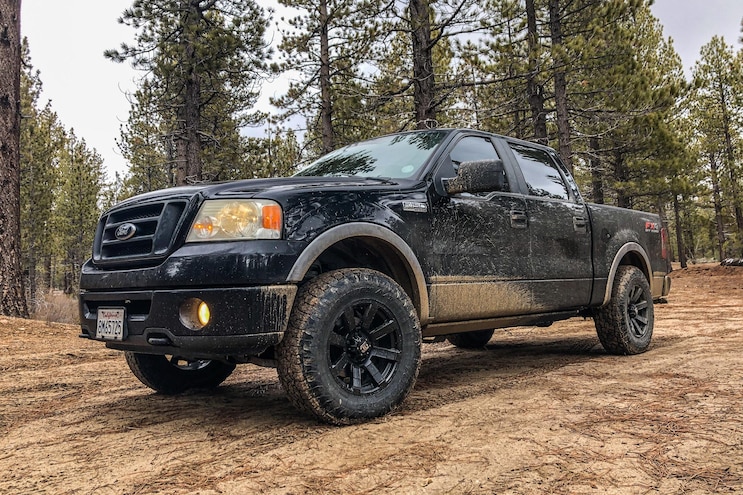 View Photo Gallery | 10 Photos
Photo 3/10   |   002 Toyo At3 All Terrain Tire Review
For our part, we wanted to test the Toyo A/T III tires in conditions a "normal" truck owner might find themselves in. We drove through torrential rain, snow-covered pavement, graded dirt roads, wet dirt roads, and a touch of off-road snow. We left the more extreme testing for our pals at Four Wheeler. 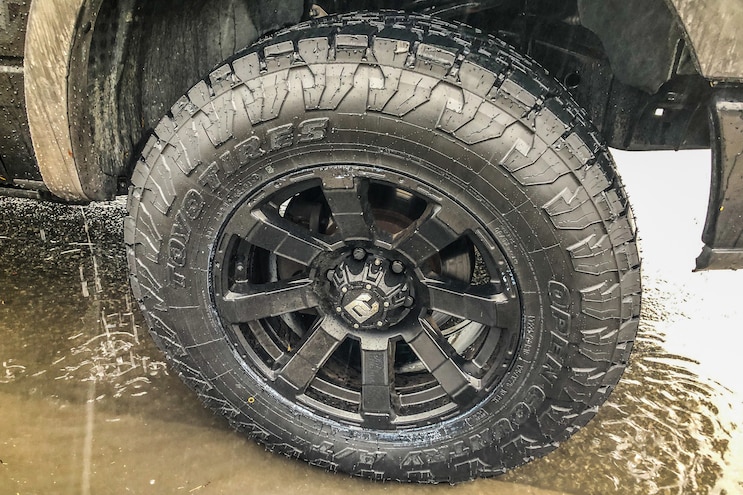 View Photo Gallery | 10 Photos
Photo 4/10   |   003 Toyo At3 All Terrain Tire Review
We lucked out during an abnormally dry spring in Southern California and found ourselves nearly drowning in an atmospheric river of rain just days after mounting up the new Toyo A/T III tires. Even with standing water on the ground, these tires gripped really well, with no felt detriment to acceleration or braking. 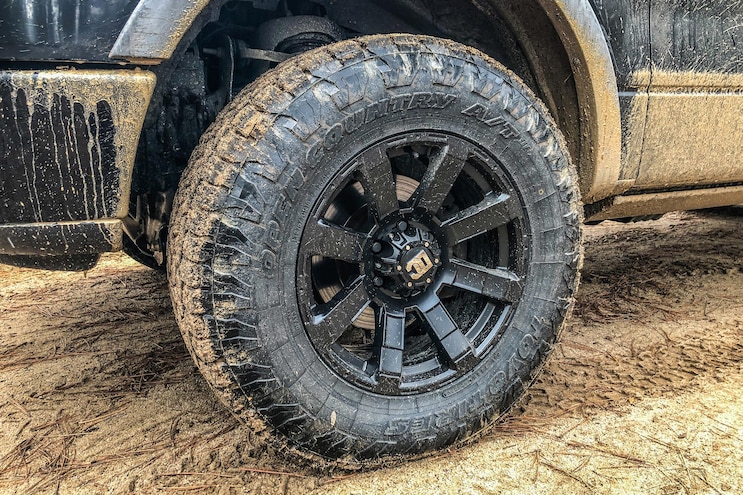 View Photo Gallery | 10 Photos
Photo 5/10   |   004 Toyo At3 All Terrain Tire Review
Running through a mud bog isn't something most people do on the regular. However, finding a wet dirt road while out exploring, camping, hunting, or fishing is a common occurrence. To test this, we hit a trail that we knew would be a sloppy mess but not filled with deep mud ruts. The Toyo A/T IIIs gripped admirably, even at full street pressure. They were able to clear the treads with little effort and kept us moving forward without even needing four-wheel drive. 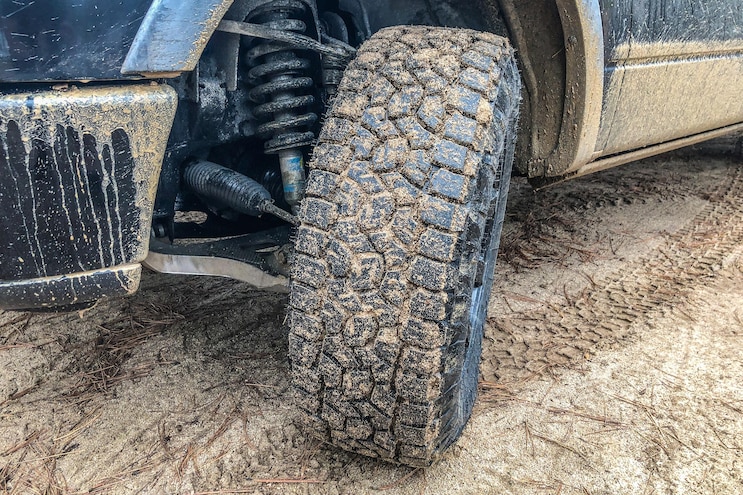 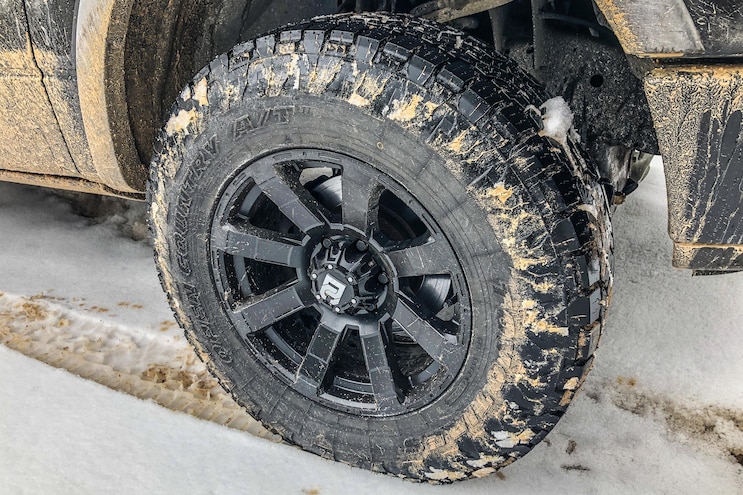 View Photo Gallery | 10 Photos
Photo 7/10   |   006 Toyo At3 All Terrain Tire Review
While we don't deal with snow very often, most of the country does. We stayed out of the massive snowdrifts and away from ice. For a normal amount (several inches) of snow over dirt, the A/T III tires gripped excellently. 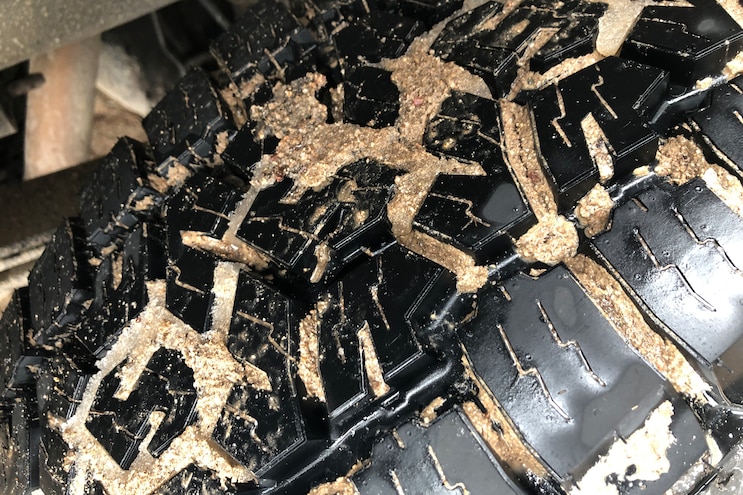 View Photo Gallery | 10 Photos
Photo 8/10   |   007 Toyo At3 All Terrain Tire Review
The tread got a little more impacted from the snow/mud combination that it did from just mud. However, that didn't hamper the tire's ability to clear the goop out of the tread blocks and maintain adequate forward momentum. 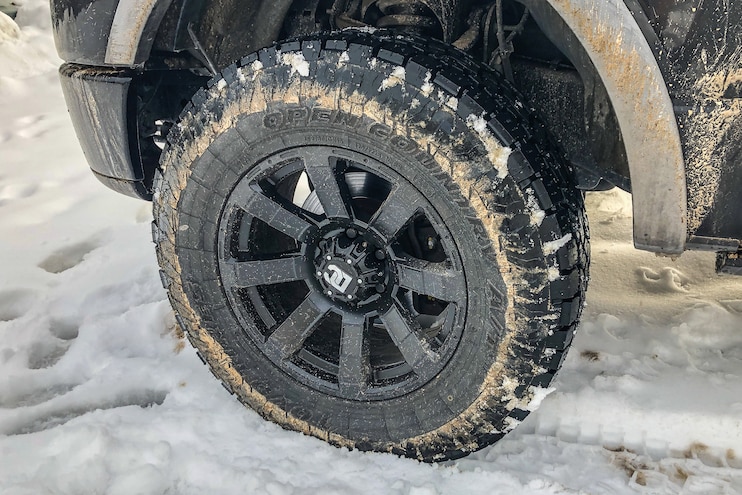 View Photo Gallery | 10 Photos
Photo 9/10   |   008 Toyo At3 All Terrain Tire Review
Snow covered highways were another area where the Toyo A/T III tire shined. With a few inches of relatively dry snow covering the ground, the tires were able to claw their way along with little drama. Wetter snow, or more of it, might change the result, but this was the best we had to work with. 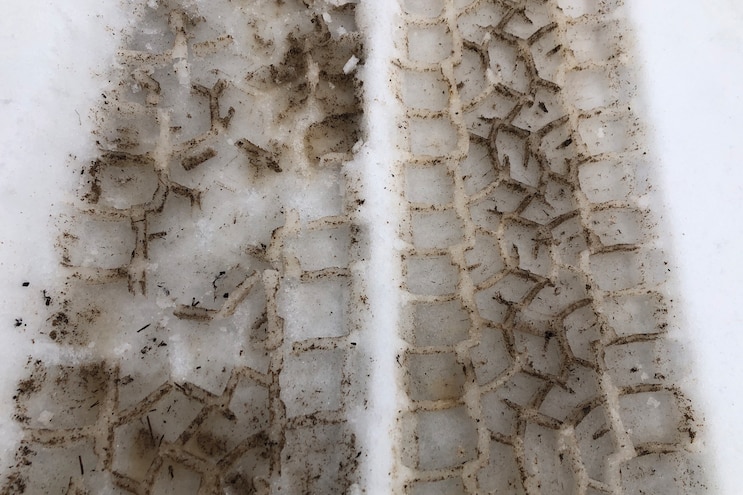