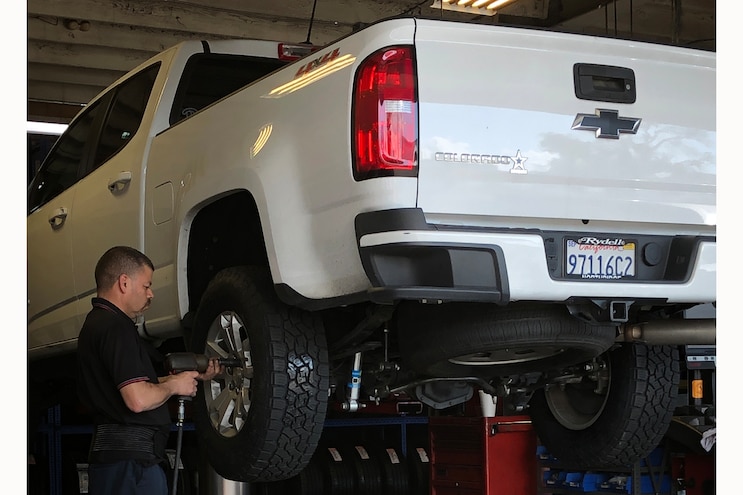 More on this 2016 Chevy Colorado!
How To: Installing Bilstein's 5100 Series Adjustable Front Struts, Rear Shocks
Eliminating Sway: Improving a 2016 Chevrolet Colorado's Handling with a Hellwig Rear Sway Bar Kit
Get Loud; Installing Kleinn Air Horns' Biggest Train Horn Kit on a Chevrolet Colorado
How To: Install AMP Research Automatic Running Boards for Chevy's '16 Colorado Diesel
Little Giant: SDP's Compound Turbos Make Loads of Power While Lowering EGTs
Improving a good thing just might be a tire manufacturer's biggest challenge, as we're pretty sure the company's plan from the outset usually is to hit a home run with any new boot that the engineers develop. In most cases, that goal is achieved. When a new tire is rolled out to the masses—and it's a good tire—it typically experiences a long, successful run as one of the brand's top sellers. Case in point, The "A/T" (all-terrain) version of Toyo Tires' popular Open Country Series that was first introduced in 2001 (launched as OPAT). Since making its debut, Toyo's A/T lineup has become a leader in the on-/off-road category.
In the years following that initial roll out, getting to the front has come through extensive research and development, as well as making inroads on advancements in tread design, compounds and overall construction (largely based on users' feedback). The findings have led to development of a second (A/T II/late summer 2012), and now, with its all-new A/T III all-terrain, third generation of the versatile tire (March 2020). 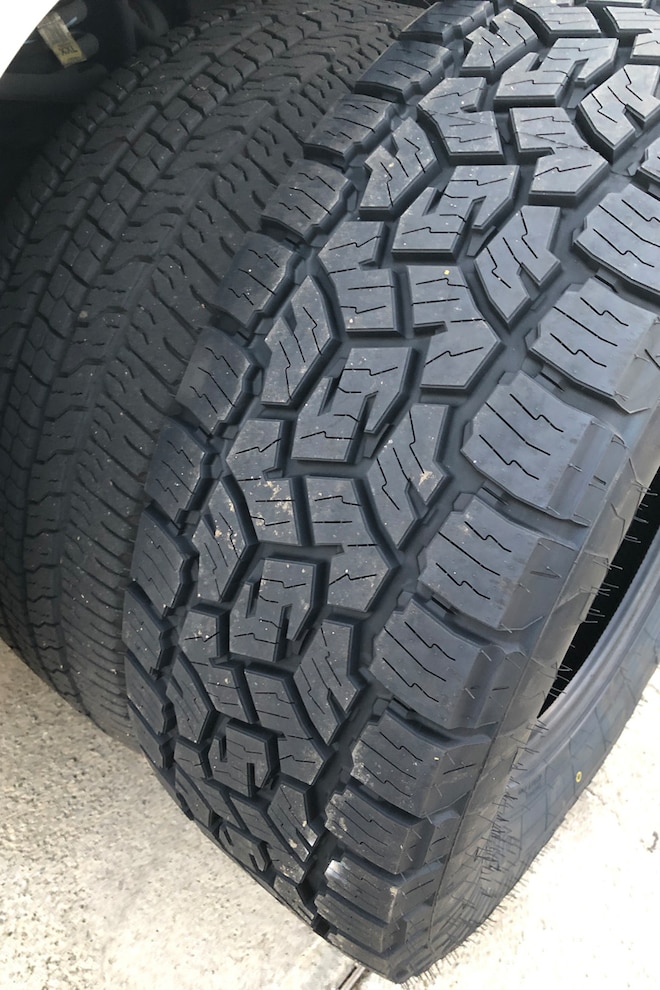 View Photo Gallery | 18 Photos
Photo 2/18   |   002 Toyo Tires Open Country A T Iii
Like the A/T II did to the original tire, the latest version basically takes A/T II to the next level through updates that were implemented specifically to improve on-, and off-road traction and handling, and noise by creating a quieter ride. Also improved are wet braking, and thanks to 3D multi-wave sipes (thin, modified slits manufactured in the shoulder block of a tire), overall performance while driving in heavy snow. A/T III carries a three-peak mountain snowflake symbol embossed in the sidewall. The indicator confirms the tire meets all severe-snow-service requirements.
Available in 127 P/Euro-Metric, LT-Metric and Floatation sizes, for rims measuring 15-, to 22 inches, Toyo Tires A/T III features Q, R, S, T and H speed ratings, as well as C, E, SL, and XL load ratings (depending on size). The new tire's tread is also protected against premature wear by a 50,000-mile warranty for the LTs and 65,000-mile coverage for P/Euro-Metric. In one of the best examples of confidence in its product, Toyo also offers enthusiasts an opportunity to "try" the new A/T III for 500 miles or 45 days. If the tire isn't to your liking, return it. Who does that? 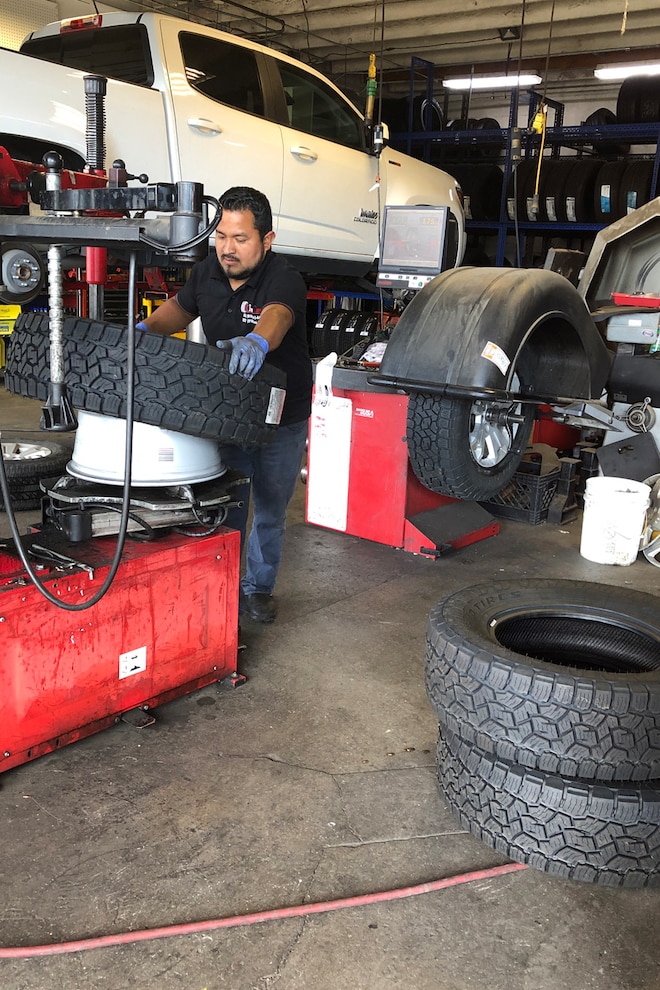 View Photo Gallery | 18 Photos
Photo 3/18   |   006 Toyo Tires Open Country A T Iii
We mounted and balanced four P/Euro-Metric 265/70R17 A/T III all-terrains on our 2016 Chevrolet Colorado LT (crew cab, four-wheel drive) with stock 17-inch wheels as the final components for our effort to enhance the truck's ride and appearance (read: stance). After consulting enthusiasts' forums online, the taller, wider 265/70 R17 (an on-road 255/65R17 Goodyear Wrangler is stock) appears to be the unofficial "standard" upgrade tire for leveled 2013-present Colorado and GMC Canyons—front ends are lifted up to two inches.
The visual difference between tires designed strictly for on-road use, and all-terrain rubber is pretty apparent as soon as they are place side-by-side. Despite our Colorado's original Goodyear's having approximately 32,000 miles of wear, Toyo's A/T III is clearly more aggressive in terms of tread pattern and overall structure. It is easy to see how the tire is capable of performing well on both street and dirt. 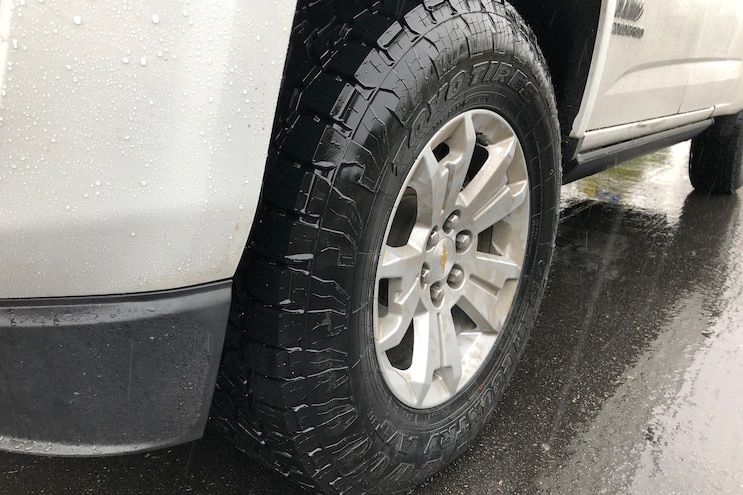 View Photo Gallery | 18 Photos
Photo 4/18   |   014 Toyo Tires Open Country A T Iii
Although we have not had opportunities to try Toyo Tires' new A/T III all-terrain rubber in dirt or snow, stay tuned to fourwheeler.com and here at trucktrend.com for reports on those experiences by Jered Korfhage and Jason Gonderman. Dry and wet roads are where we have had the chance to drive on the new tire.
And, as initial feedback goes, handling, especially on a wet surface, is very good with the new Toyo. On the freeway in heavy rain, lane changes are made without apprehension about loss of traction or control of the vehicle. And with our truck's ride already enhanced by Bilstein 5100 Series shocks and struts that were installed prior to the tire swap, the increase in sidewall by almost 12 percent improves ride quality even more.
Yes, A/T III is quiet. Having experienced only on-road tires before making this switch to all-terrain, our expectations in this area were high. In the cabin, we could not discern any abnormal levels of tire "roar" during dry or wet driving loops. (We tested with radio off and on, windows up, and down, and at streets and highway speeds). View Photo Gallery | 18 Photos
Photo 5/18   |   017 Toyo Tires Open Country A T Iii
We're looking forward to logging more miles on Toyo Tires' A/T III all-terrain tires and learning more about its capability. For now, it definitely has helped us hit all the targets we set for modifying our 2016 Chevrolet Colorado LT. With its leveled profile, taller overall stance, and better handling, as well as a firm but compliant and comfortable ride, we're very satisfied with the changes.

Truck Trend Network
Truck Trend Network
how to
What are Beadlock Wheels?
Beadlock wheels are something were betting you’ve heard of before or at least seen, but what exact...
Verne Simons – Feb 10, 2020
Diesel Power
Diesel Power
news
Top-7 Tires for Towing Heavy Loads
More on Tires! Tire Test Guide – Choosing The Right Tire Bias Versus Radial Trailer Tires Understa...
K.J. Jones – Jan 27, 2020
Truckin
Truckin
how to
Upgrading a New to Us 2015 Ford F-150 with Shocks, Wheels & Tires
Today’s trucks from the factory are well equipped for all kinds of use,...
Grant Cox – Jan 21, 2020
Diesel Power
Diesel Power
how to
Best Snow Chains for 4x4 Pickup Trucks
More on Driving in the Snow! Snow Driving 101 Do You Really Need Snow Tires? SnoClaws- Getting You O...
John Lehenbauer – Jan 16, 2020
Join Our FREE Truck Trend Network Newsletter