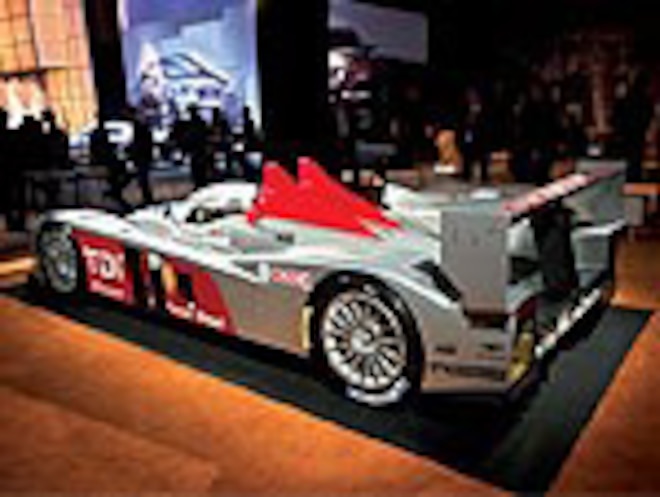 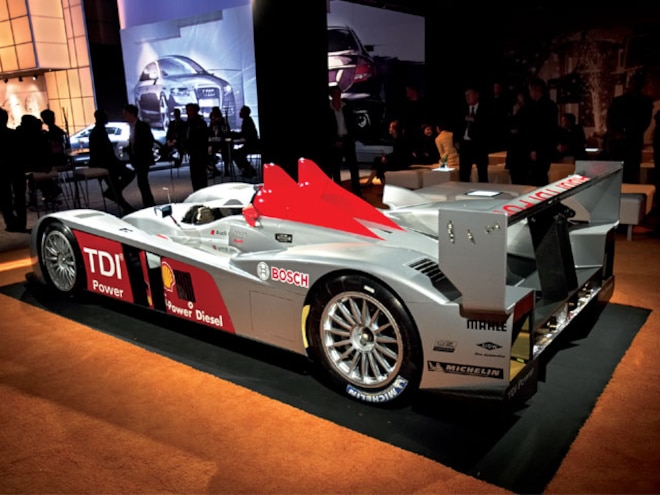 View Photo Gallery | 8 Photos
Photo 2/8   |   audi R10 Diesel Prototype rear Side View
In this business, we see product all the time and few leave a long-lasting impression. This was different. The R10 is real history, as it happens, and few realize that Audi's leap with the diesel is nothing less than a full-scale revolution in the motorsport ranks.
The choice of Paris for the initial roll out to select, and we do mean selected, members of the media was no accident. While no one dares to suggest there was malice, the sight of the R10 running a few laps around the Eiffel Tower was a slap-down at the automotive industry of France. It may not have had the History Channel effect of newsreel footage of the Wehrmacht marching down the Champs d'Elysee, but it was an invasion, and Audi intends to occupy the Sarthe region of France for a long time to come. Americans who have long been used to cheap fuel costs have yet to connect to the thought of smooth and economical diesel power. Visions of stinking Mercedes-Benz 240D taxicabs and semi trucks crowding the islands at gas stations are the standard view. Clinking, clanking collections of caliginous junk are the lasting impressions for the typical U.S. drivers of the legacy of one Rudy Diesel. Audi, ever mindful of these images, handled the launch of the R10 from both ends of the spectrum. Paris was the large canvas with full strokes of the brush, and Los Angeles was to be a preview of coming attractions.
Diesel power accounts for the majority of auto sales in Europe, and the advances in diesel technology have been at quickening pace since the first Gulf War. Governments only too aware of interruptions of fuel supplies have encouraged more fuel efficient vehicles. Efficiency is one thing; having a car that you want to drive is something else. The choice of diesel power from the lowest priced tintop to a flagship cruiser such as the Audi A8 has made the option to the social classes all that much more acceptable. When the market is three-quarters diesel, it had better damned well be.
The Volkswagen Group, through its Audi and Bentley brands, has owned the 24 Hours of Le Mans since 2000. As the clich goes, nothing else comes close. In the case of the previous gasoline-powered R8, Audi rewrote all of the records in performance and reliability on the racetrack around the world.

View Photo Gallery | 8 Photos
Photo 3/8   |   audi R10 Diesel Prototype left Side View
For several years, the talk of diesel-powered prototypes has been the vogue. We don't mean the small private efforts but a full-fledged factory-backed effort with the resources to pull it off. Peugeot was tagged as the favorite to lead such an effort, as Renault was concentrating on Formula One, and it made sense for the French lion to promote the production side of business with a diesel assault on Le Mans. When Peugeot issued a statement that the firm would enter Le Mans for 2007 with a diesel, few were aware just how far Audi had proceeded with its own covert program. While Peugeot and its advisory board, PSA, were aware of the existence of the R10, the announced roll out in Paris was something of a surprise. PSA's vice president, Jean-Phillipe Peugeot, was candid when he stated that it will be difficult for Peugeot, as Audi will have a year of experience and that its chassis development goes back for six years.
Dateline Paris-there it sat on a cold winter morning. Seven time Le Mans winner Tom Kristensen about to strap himself in to the car and run a few laps around a landmark of the city of light. A real running car and what of the perceived competition? No chassis as of yet, nor a running powerplant.
Germany: 1;
France: 0.
Every year, the same question is asked. Why does the Detroit Auto Show matter? It's cold, the weather is lousy, and January is a bad time to be on the East Coast. Do the so-called Big Three still hold that much clout to keep thousands of people held hostage year after year? The Los Angeles Auto Show, on the other hand, is a curious affair. Backed by dealers and with a minimum of true manufacturer participation, it should be a more important-critical-show. It isn't, and it's difficult to understand why.
Audi solved the L.A. problem by arranging an "Audi Designers Night" held at the Art Center in Pasadena the evening before the opening of the car show. A room full of concept cars and projects la the corporate design studio in nearby Simi Valley was a well-attended, invitation-only affair. This accomplished two things, one being that Audi could forgo the usual 30-minute press conference held during the show, and second, a captive audience wholly focused on the whys and wares of Ingolstadt.
The R10 was not on the agenda and had been quietly flown in along with Tom Terrific and hidden behind a facade of concept murals. Few people seemed to connect Kristensen's attendance with anything but a PR wingding promoting Audi's record at Le Mans. The stage was set in the fashion of a TV talk show, with a host and guests and a set of questions and answers that were well rehearsed. At the close of the various presentations, Dr. Ullrich was announced along with Tom Kristensen and the murals parted to display the new diesel, with Kristensen seated in the R10. The crowd seemed both intrigued and somewhat baffled by the program. Motorsport and the flashy concept crowd makes a curious mix. The tech geeks made a beeline for the R10, while the fashionistas passed the prototype up for the fully stocked bar located just behind. T.K., as he is well known, was casual as he greeted well-wishers and answered the occasional question. It was strange to see this man, who has seven Le Mans victories to his credit and attracts major attention in Europe, blend in with the crowd. The public relations move paid off; press boss Jurgen Pippig, along with R10 chassis 01, were out of there the next morning, the car returned to Germany to be prepared for the upcoming test program. With a major test at Sebring only a few days away, Audi didn't have the luxury of displaying the R10 at the L.A. show. In retrospect, it would have been a waste of time if it had. The typical observer would not have thought much of the new car, its similar outward appearance to the R8, and without proven results to display or champion few would have cared. The U.S. car market has a long way to go to be convinced that diesel is the right direction, and Audi's approach by showing the R10 to a select few was correct. The Paris splash proved Audi was ahead of the game. When change comes to the United States later this year in the manner of the new, higher grade low-sulfur diesel, that will be the time for a full assault on the American psyche as to just how good a diesel can be. Audi has already made the move.
The issued technical details on the R10 show a well-thought-out approach continuing in the tradition of the all-conquering R8. One major departure is the new car has combined the monocoque and the bodywork in a more seamless manner for an increase in airflow. Wind-tunnel time resulted in a flatter shape along with a more pronounced nose. The longer wheelbase was a necessity to handle the larger coolers and plumbing along with the engine itself, which weighs more than the gas engine in the R8.

View Photo Gallery | 8 Photos
Photo 4/8   |   audi R10 Diesel Prototype audi Diesel Engine
The heart of the matter comes down to the incredible 5.5L V-12 TDI that powers the new chassis. The usual production-type four valves per cylinder are mated to an entirely new aluminum crankcase that pumps out a regulated 650 hp through a pair of Garrett turbos. Boost pressure is just below the 43-psi measure mark with a useable powerband between 3,000 and 5,000 rpm. What has set tongues wagging is the unbelievable torque figure of 811 lb-ft. While fewer gear changes will be the result of the huge torque, this in no way reduces the strain on the gearbox. Xtrac handled the serious work on the final drive, surprisingly over former partner Ricardo, who enjoyed such a good record with the R8. Bosch continues to supply the management system with the latest MS14 workings, and Audi continues to use usual trusted sources such as OZ wheels, Shell Oil, and so forth.
Of special interest is the new command center steering wheel as supplied by Megaline. A perusal of the photo shows how far the game has progressed on available data in such a confined space. Much has been made of the fuel economy of the TDI, and the ability to stretch out a few extra laps over the competition at Le Mans is a huge advantage. The one area that will make or break these advantages is the tires. Much will depend on Michelin's research and development to provide the right compound of rubber to handle the high loads even with the use of traction control.
As this issue of Diesel Power went press, Audi had won its debut race with R10 at the Sebring 12-hour race in Florida. Expect more diesel dominance in the 24 Hours of Le Mans, June 17-18.

- OF
By Kerry Morse
1 Articles